One of the frequent questions we get at CTG is evergreen structure for sun or shade.  So, check out this week’s show for David Meeker’s fabulous suggestions from Gardens! His plant list will be online, with a few “web extras.”

On tour, meet my new friend, James Bays, in Elm Mott, near Waco. I met him through my earlier new friend, Judith Tye, a CTG fan in Waco, who recommended this amazing garden, mainly in shade. On taping day, fellow master gardeners Barbara Vance and Ila Jean Carothers joined us, so along with taping, we had a great plant yap-fest.  On top of that, they all contributed to a memorably delicious luncheon (James is a superb cook as well as gardener). James even built the intricate garden structures and furniture from wood he milled himself, sometimes from trees on his extensive property. Here’s one of his indoor tables.  You can see one of his outdoor benches in the background. 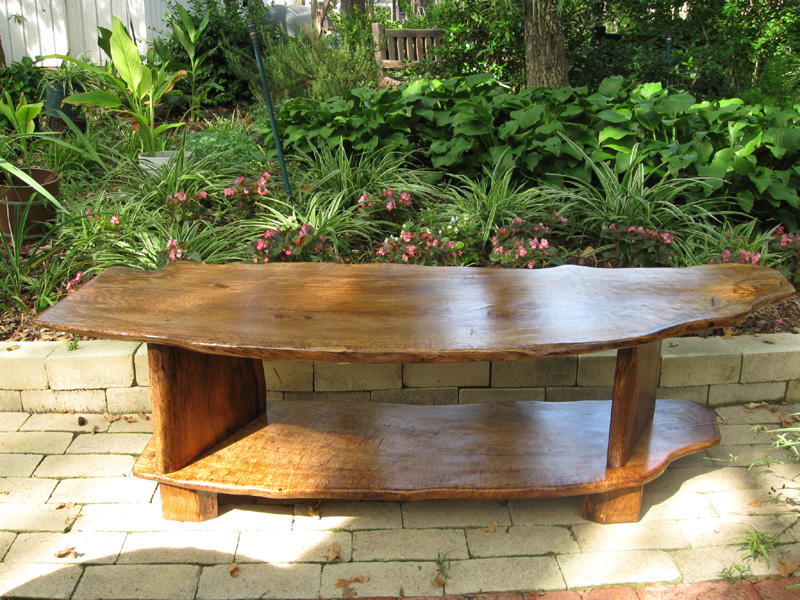 Have to show you this bougainvillea from a few doors down from me.  This convinces me that next spring I’m moving mine from the pot to sunny ground in former photinia-ville. 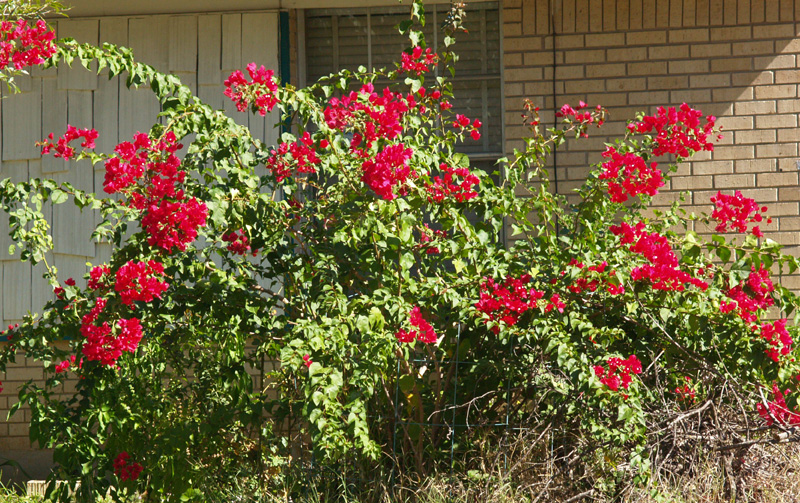 Tom and I always get questions about bougainvilleas not blooming.  I’ve had luck giving mine blood meal, but what they really want is unrelenting sun. I’ll let you know how my neighbor’s plant handles winter, but obviously it’s made it through a few.

Last weekend, I planted my new Abutilon ‘Patrick’ in the den bed at the opposite end of ‘Tangerine Dream.’   I figure it will hide the bald canes of the climbing Buff Beauty rose, and peek through our window. 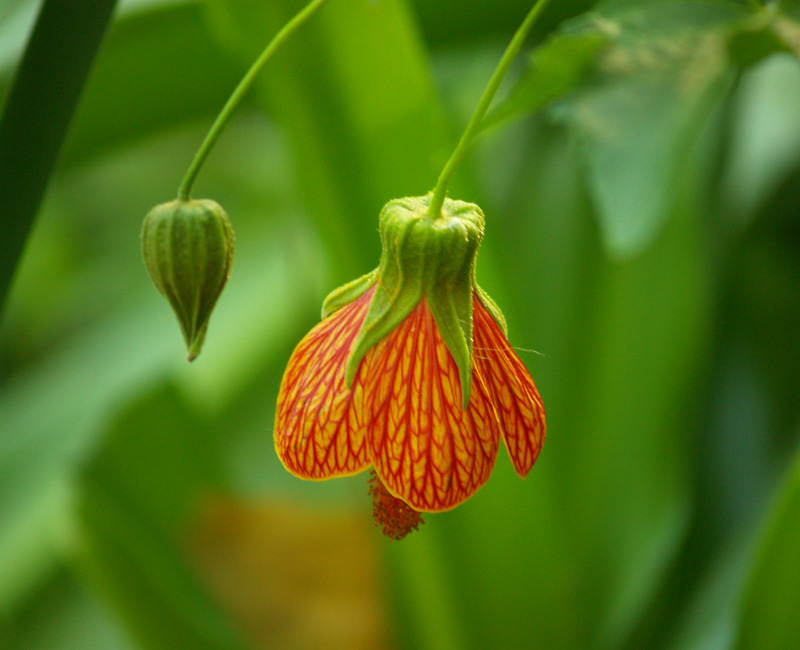 It’s named for Patrick Kirwin, who provided cuttings to Barton Springs Nursery. Along with my new thing for abutilons (and thanks to you, for your encouragement), it’s my personal brush with fame.  I met Patrick last spring on a garden shoot, where we set up the fern show.  I’ve met a lot of famous people at KLRU, but the biggest kick to me is a plant named for someone I know.  Well, okay, my signed James Michener and Susan Wittig Albert books count for a lot too, and I lent a bobby pin to Molly Ivins, I helped Barbara Jordan onto our set, I rode in the elevator with Paul Simon, and I have a personally signed letter from Lady Bird.  But that’s getting off track. . .

Also in the den bed, I planted two ‘Valentine’ roses. I don’t know the person who named them, but I do know the person who sold them to me at It’s a Jungle:  Juan Guerra.  And that counts, too.  Mentored by Dicke Patterson, one of my all-time favorite famous people and a supreme, kind gardener, I met Juan at a taping of his first garden design for John Woods (see it in Video). Juan is just as exceptional as Dicke, who I’m sad to hear has retired from active duty. But knowing Dicke, he’s not retired from helping every gardener he meets, and passing along his knowledge to young people like Juan.

I thank Pam Penick for her assurance about their durability and setting.  I’d seen them in person when we taped her garden (also in Video) and in her blog, but just needed some more hand-holding.  Gardeners do that so well!

On memorable people I’ve met, it was Colleen Belk at Barton Springs Nursery who sold me this perennial Gomphrena ‘Grapes’ a few years ago. 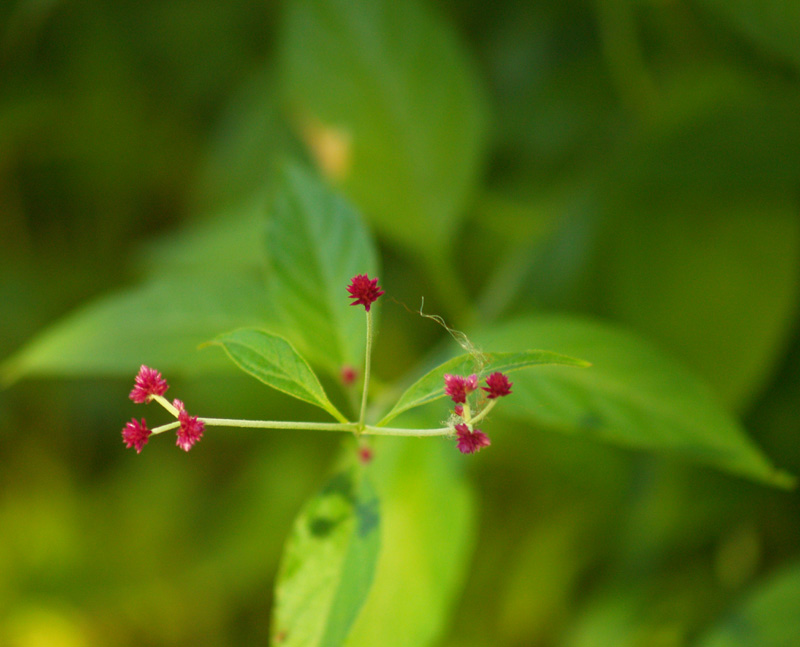 It’s a late summer and fall bloomer, with tiny little flowers that I can’t seem to get in focus, and dies back in winter.  In spring, it returns, fluffier and hardier than ever (now about 2′ tall). I have it in the crepe bed where it gets some sun, but shade a lot of the day.

On the crepe bed, here’s its latest rendition at the right side. I thank gardener Walt Krueger for telling me about the ‘Helen von Stein’ lambs ears. 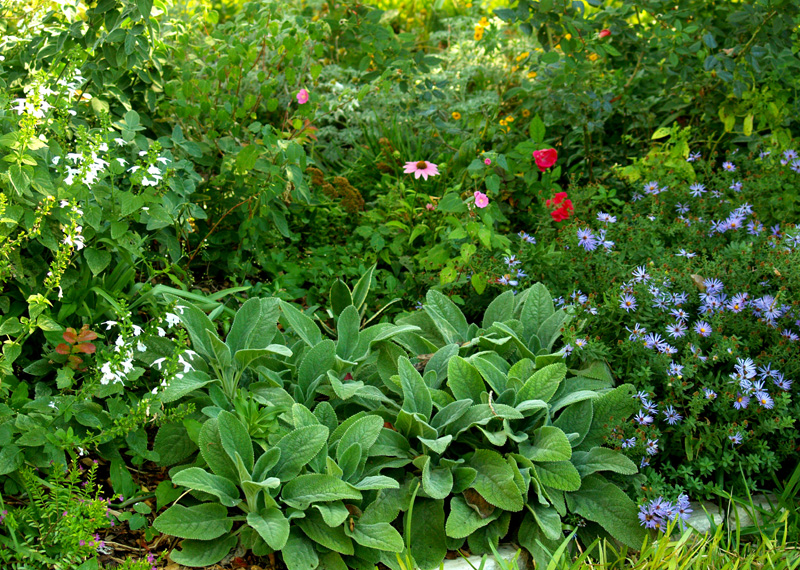 In the shady rental side, this year’s Persicaria ‘Red Dragon’ is blooming.  We’ll see if it fills in by next year.  I can say that when I stick a cutting in the ground, it roots in minutes. I bought these last spring on a day that I ran into fellow gardener, CTG feature in Video, and friend Brent Henry at the nursery.  To its left is the new Sparkler sedge. 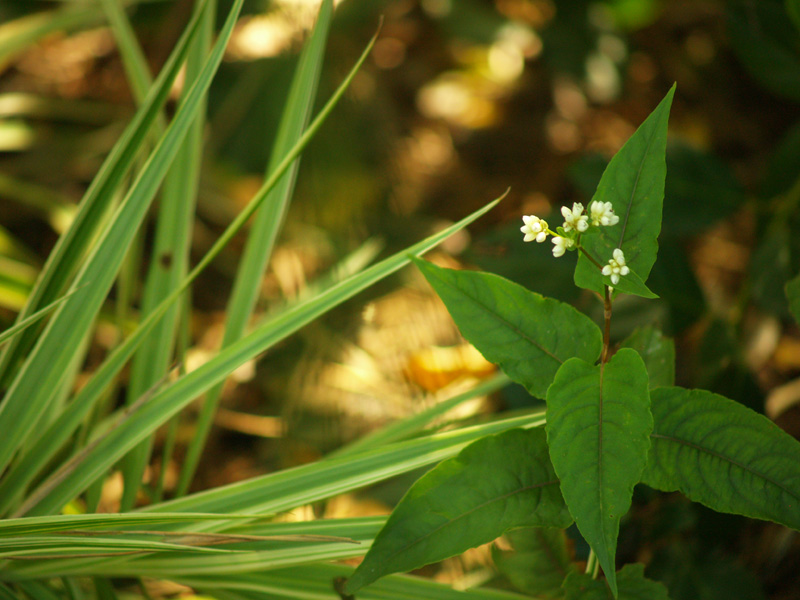 My plants are all attached to people, in some way or other.  Even if I can’t remember the botanical name, I can remember the person who gave me the idea (or the plant!). For me, that’s the best thing about my garden.