For years, I’ve drooled over every abutilon I’ve seen in gardens. But, they look like something I could kill in a minute, so they never made it to the budgetary food chain. Then, this spring, a gardener gave me one of his ‘Tangerine Dream’ rooted cuttings. During this horrible summer, every morning I walked out expecting to find its sad little remains.  Instead, it said, “Howdy, don’t worry about me.” The day after Halloween, it gave me the best treat ever. 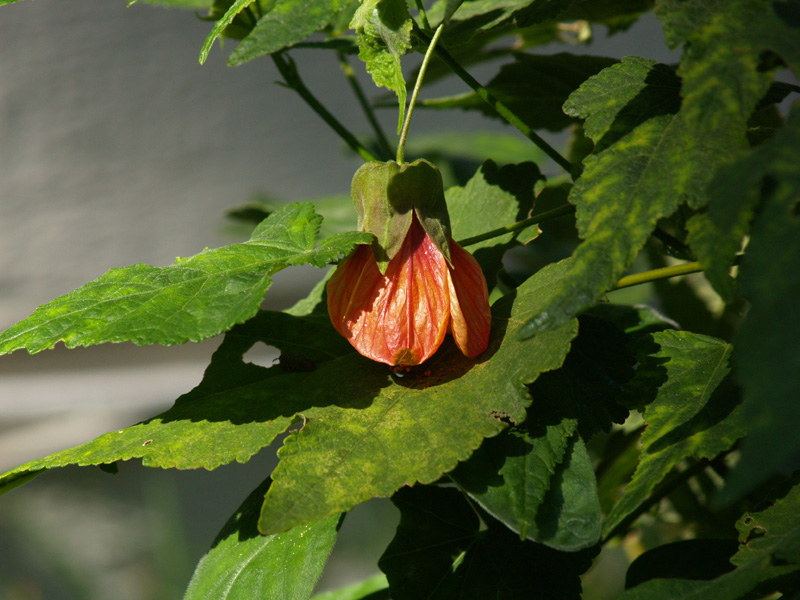 The trick may be that it likes its spot at the end of the den bed: morning sun, afternoon shade. The soil is fairly loose after years of compost and mulch. In that bed, ‘Country Girl’ mums also started to open against asters and daylilies. 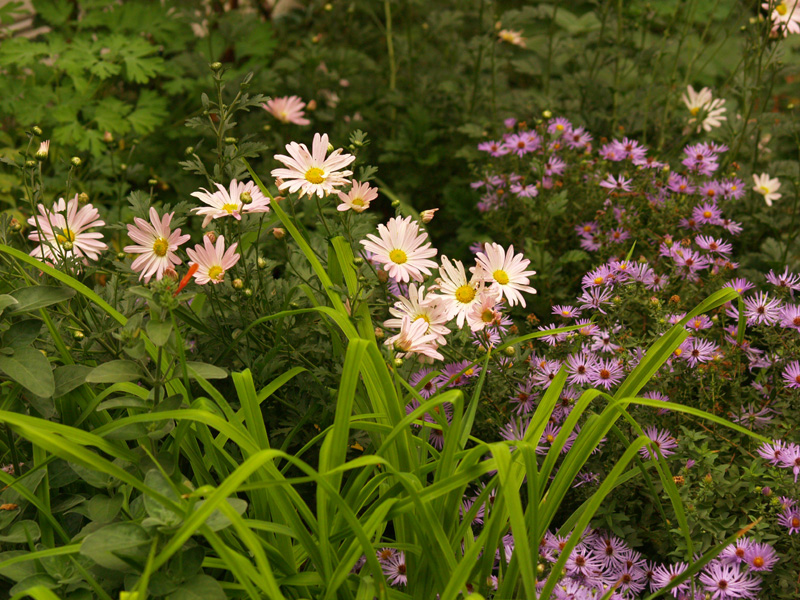 With Pam Penick’s encouragement, I got a bamboo muhly for the front bed.  It looks a little weather worn from summering in a pot, but I gave it some Medina Hasta Gro after I watered it in. I bet it will fill that blank spot by next year.  To it’s direct left is a tiny Betonyleaf mistflower (Conoclinium betonicifolium) from the recent Wildflower Center sale that should fill in that space by next year.  Various bulbs accent in spring and fall. 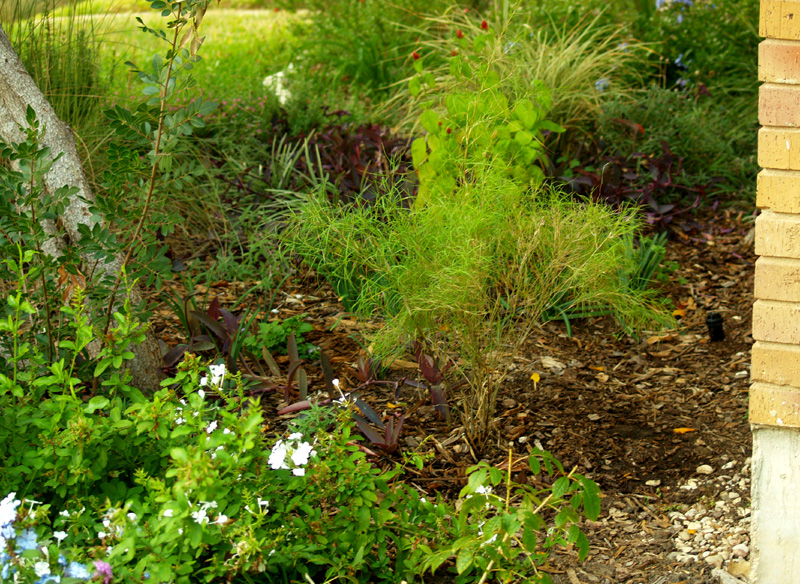 In the foreground is the Tecoma stans I just moved.  By next summer, the two of them will softly cover the corner.  The plumbagos in the foreground are this year’s divisions, too, so they’re still on baby legs.  All of them are sure better than the nandinas that overwhelmed the house until their sudden “departure” last fall.  Here’s the front view. 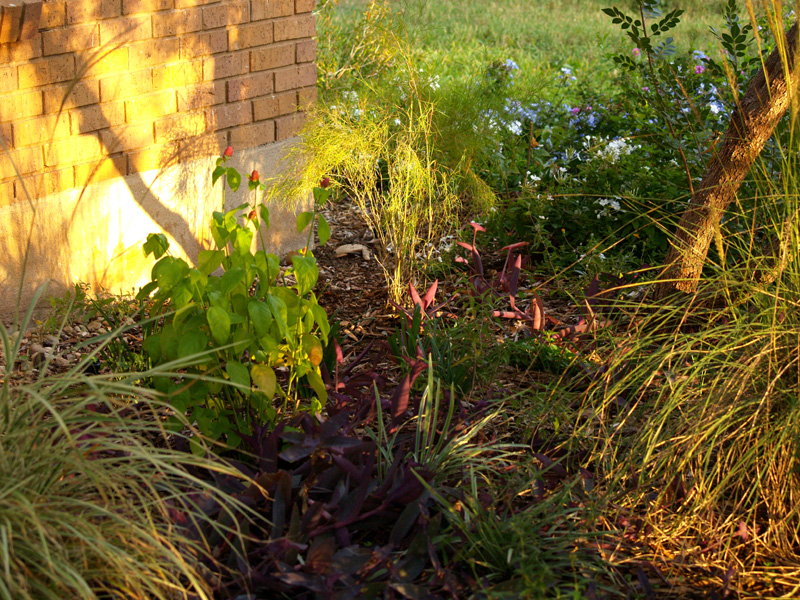 To its left is the shrimp plant I divided in spring.  By next year, it will fluff out, too.  I like the contrast of the different leaf colors and foliage textures.   I haven’t decided whether I’m going to add more Aztec grass or keep dividing the setcresea. There’s also a zexmenia I moved in there, so I need to keep in mind that things will grow (at least, I hope so).

I’d been out to get an umbrella sedge for the rental fence bed, too, but when I saw this one, ‘Sparkler’ sedge (Carex phyllocephala), I changed my plan. 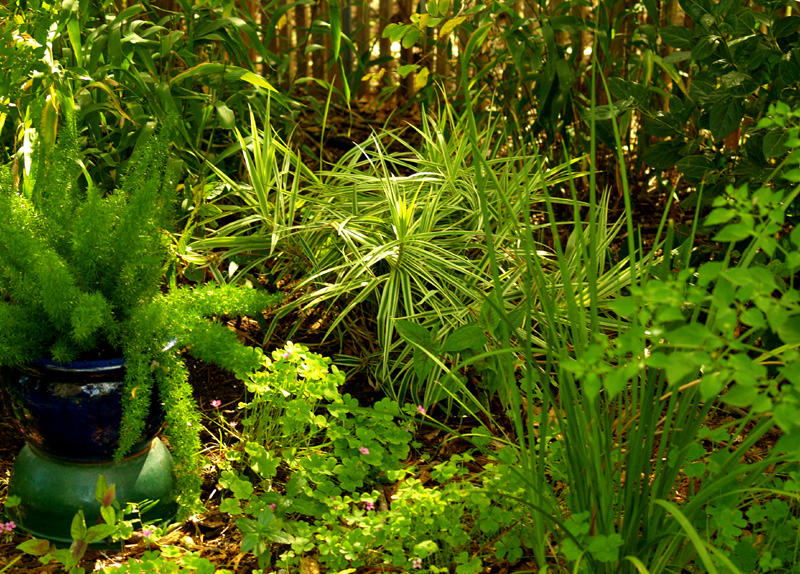 On chores, I tackled the lettuce beds, since the weeds figured the watering and fertilizer were meant for their seeds, too. With our first little nip that wilted the batface cuphea, I planned to check my rowcover situation. But the heat made me lazy, so I’ll do it this weekend.  That means, of course, that it will suddenly drop to 17º when I’m at work and I end up stumbling around in the dark with a flashlight. (Oh, while I was trimming off the cuphea, I planted a chervil that Trisha gave me, and some larkspur seeds to fill its blankness when it freezes for good.)

The only things I’ll protect this year are the tender container plants I don’t take under cover, the new Agave celsiis, the Satsuma orange, and the lettuce. A few years ago, we made lettuce hoops with flexible copper tubing (plumbing supply section) after seeing it in a garden. A luxury it was, but they’re so pretty all year, and we have just a small space to protect. For grand vegetable gardens, rebar or PVC is a better decision. 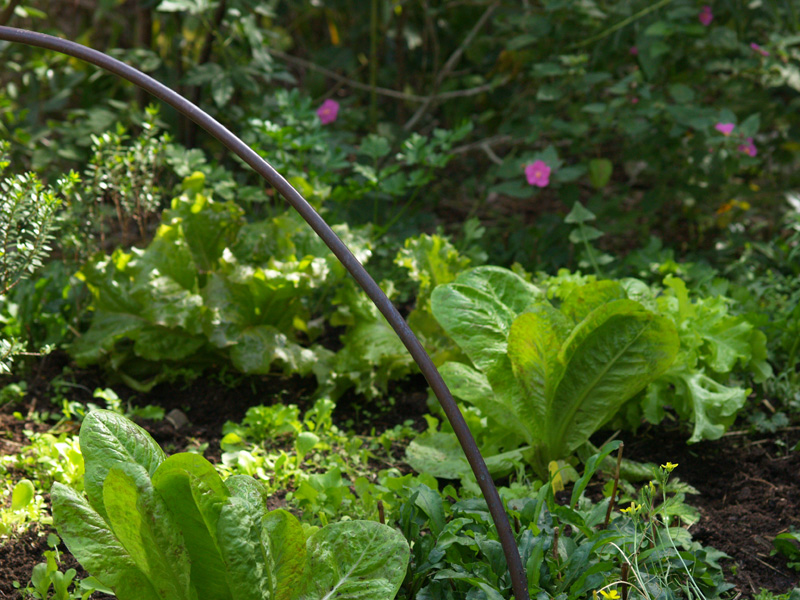 The main news!  Our Christmas present came early, thanks to Zac Zamora of Variance Vessels. His sleigh was in the shop, so he used his van instead. 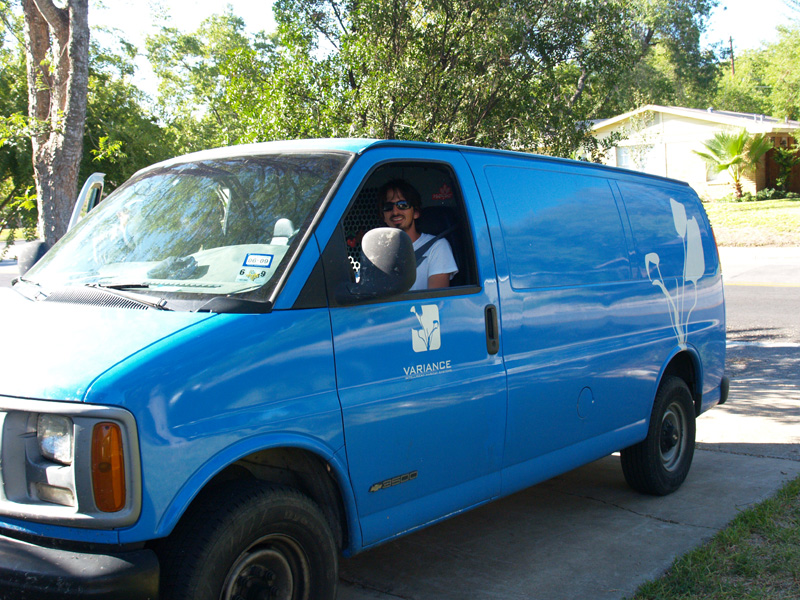 Forever, I’ve wanted the perfect birdbath. Last fall, I saw an incredible one near KLRU, took a picture, and imagined how I could make it happen for me. About that time, I saw a blurb in Renee Studebakers’s Statesman garden section about Variance.

When I checked out Zac’s site, I found a potential vessel for my idea, and a great CTG guest!  Along with his vessels, Zac’s a nationally recognized creative artist for his natural habitat designs.  Faster than you can click “Contact,” we set a taping date for a January broadcast.

For the heck of it, I sent him my photo and explained that I wanted a cat-safe, bird-perfect birdbath. Along with Greg’s measurements for height and size in our garden, Zac did extensive research to design a basin that is layered like a natural pond. 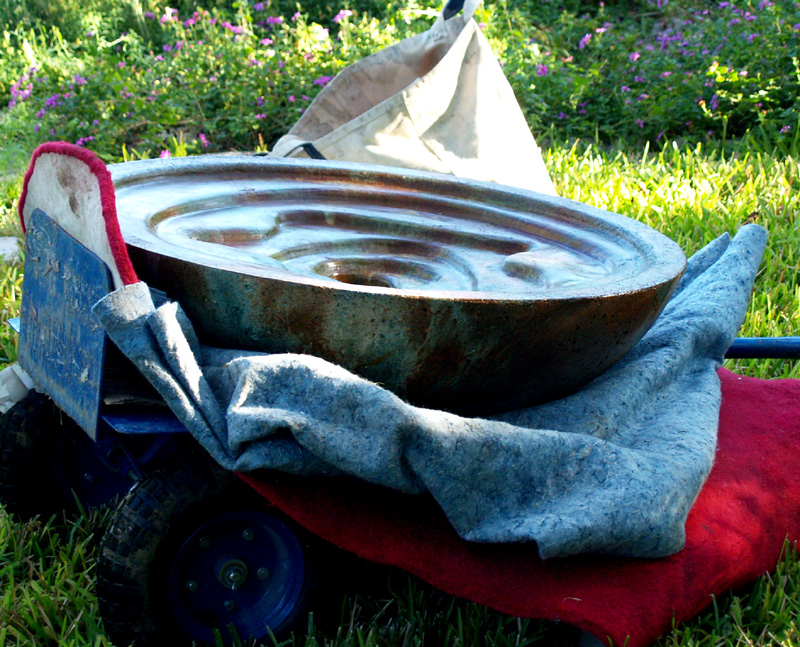 Then he crafted the metal base with feet and supports to handle the basin’s 240-pound weight. Along the way, he sent me pictures of it in progress and asked about finishing details. I’m astounded that from my few vague notions, he captured my dream precisely! And, it’s a straight-shot view from our patio and our den. For years, the Afghan pine had this spot, but it’s been reborn as a birdbath! 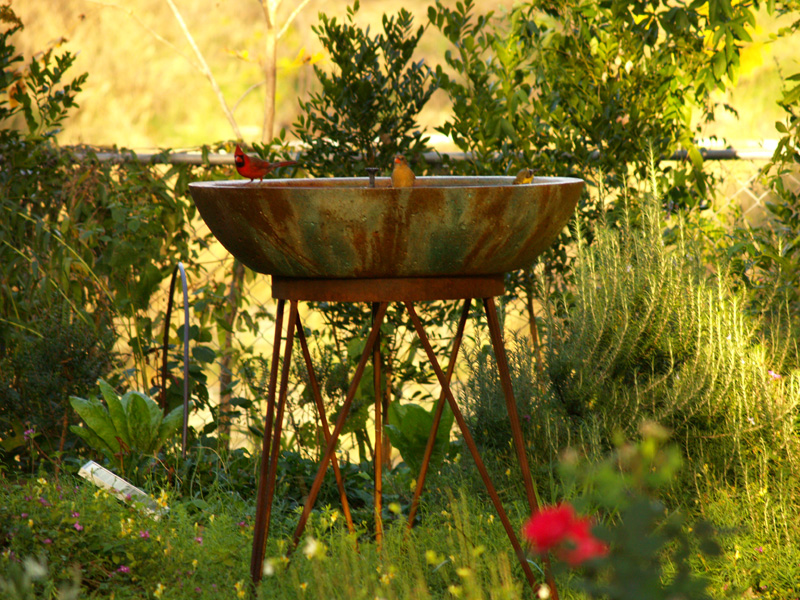 On delivery day, Zac brought Erik O’Brian and Dean Hansen, friends and fellow gardeners, to place and level it to perfection. 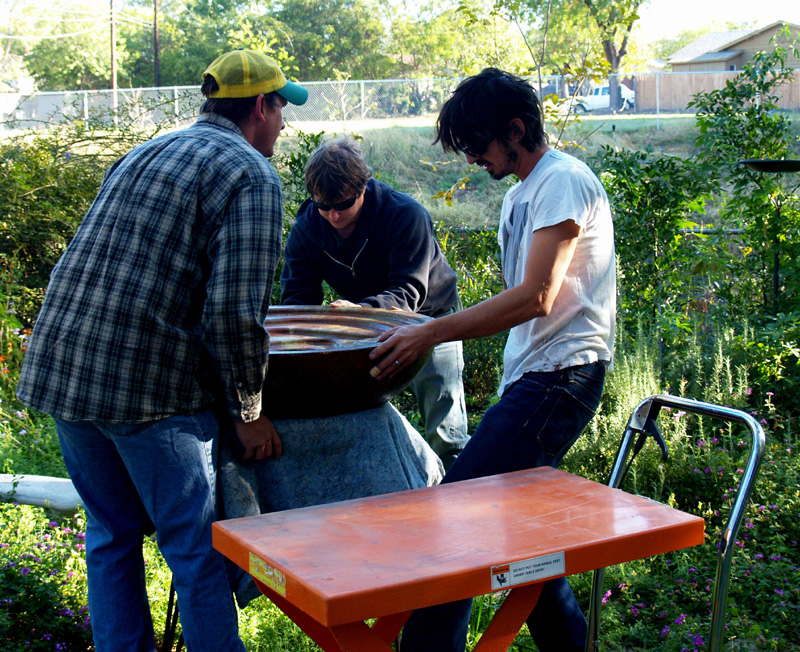 Greg helps finesse, since we’re not going to be moving it! 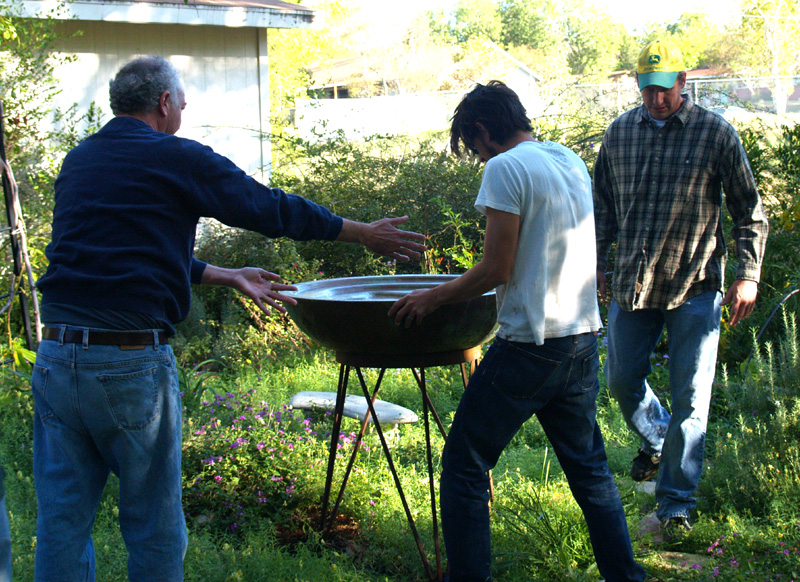 I loved Zac’s idea of a solar fountain!  I had just the rocks for the fountain’s little well. When it’s going full steam, we can even hear it from the patio. Here, it was just warming up, so to speak. 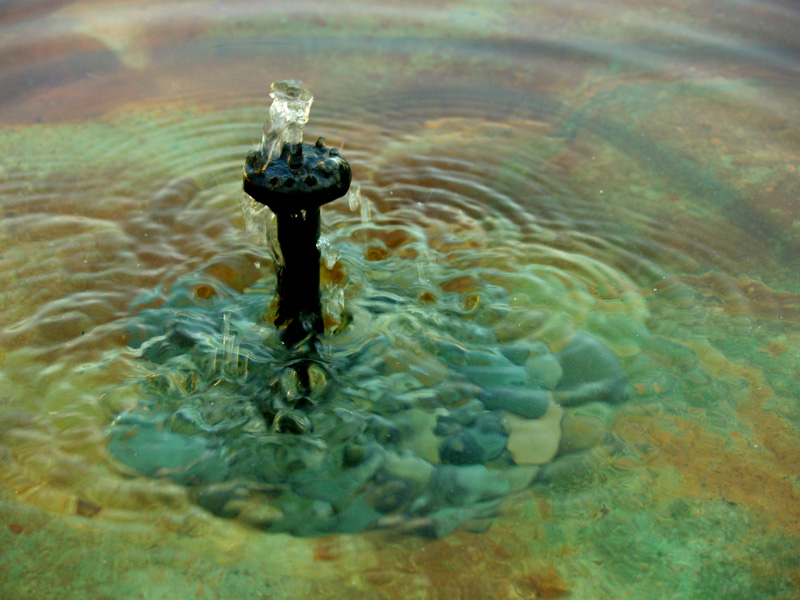 We’re still working out the best position for the solar panel.  Most likely, we’ll install it on the nearby rose arbor.  For now, I’m protecting the cord from rabbit, dog, or gardener mangling with something I got during Harvey house proofing. 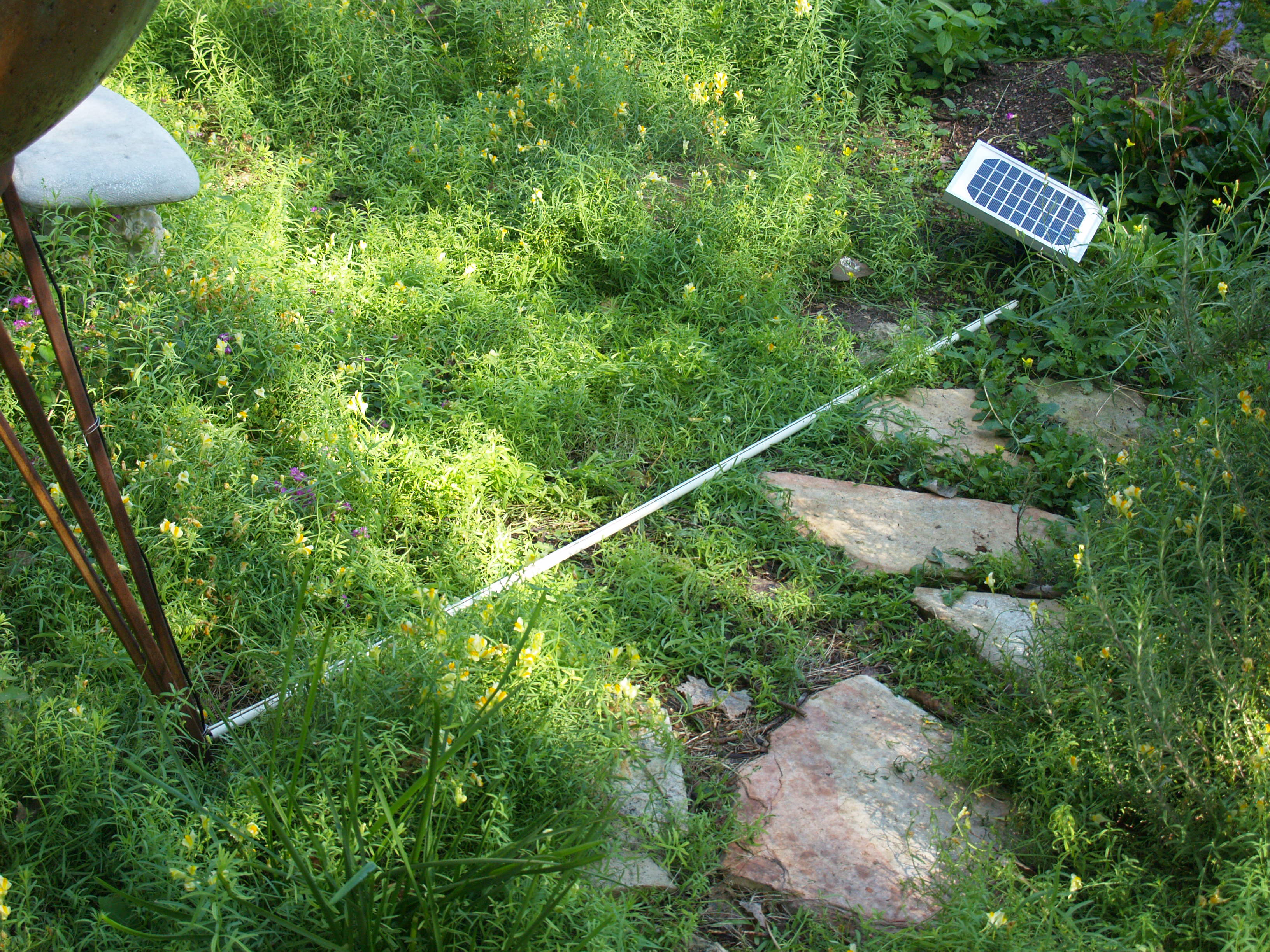 Thank you to Eric, Zac, and Dean! 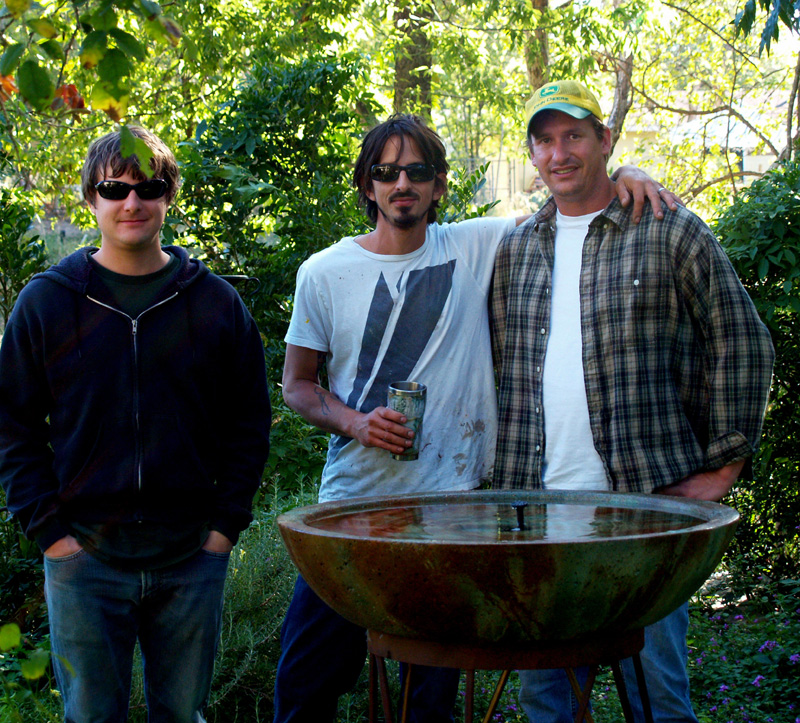 On water, here’s a funny for you from Jerin, CTG editor and camera operator.  Twitter fans, alert:  now your plants can twitter you when they need water.

I hate to think what would happen if our plants organize a Twitter network.  We’re doomed.

Finally, to learn more about growing winter vegetables from the experts and just darned good people, head to Angel Valley Farms this Saturday, November 8, for Jo and John Dwyer’s annual Open Farm tour from 10 a.m. to 2 p.m. You can also visit their farm stand for organic produce, which is open every weekend in the harvest seasons.