When I started gardening, I learned a lot of facts from books, but from Scott Ogden’s, I really fell in love with plants. I was so worried about doing the right thing, textbook style, that I was afraid to make mistakes. Turning the pages of his books, I started to see nuances of light, playfulness, and adventure. Along with fantasy, I absorbed the facts won by his hands-on experience. When I’m exploring new plants or bulbs, I always check his books before I dig any holes, since my latest love must get along with heavy clay soil. I can stand only so many garden heartbreaks. I’m sure the plants thank me, too.

Years later, I met a kindred spirit in his wife, Lauren Springer Ogden. On the national and international scene, Lauren’s known for her sensory garden designs and books, including Passionate Gardening: Good Advice for Challenging Climates, the first of my Lauren collection. In just a few pages, I felt connected to a gardener who loves plants, and writes as if she were penning her thoughts to her best friend.

In their first book together, Plant-Driven Design, they combine their experience and poetic writing in a resource that is rich in philosophy, inspiration, and facts. 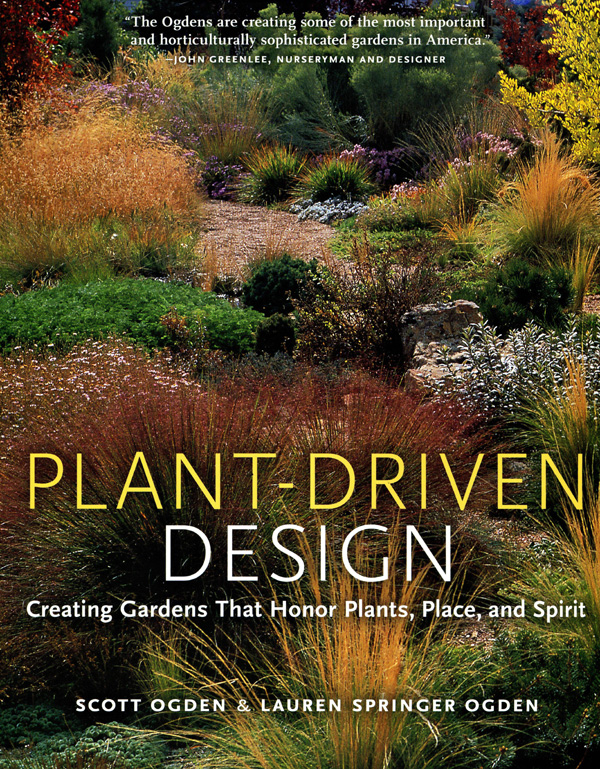 This week on CTG, meet Lauren and Scott in Tom’s interview and through our video shoot at their Austin home last spring. You can also catch their garden video on the CTG site.  Like all others, we archive it under Video after its broadcast week.

In my garden, I moved my bamboo palm (Chameadora macrospadix), about 15 feet down the rental fence bed from its original site. Its first berries ever weren’t red yet, but I took this picture in case the move disturbed them. 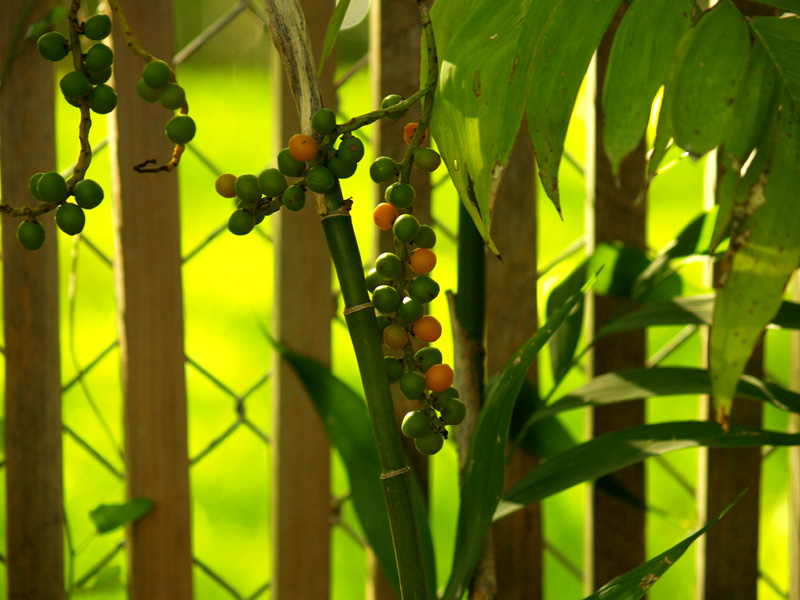 I fell in love with this plant the minute I saw it a few years ago.  I moved it because its neighboring ‘Spring Bouquet’ viburnum and aromatic sumac had filled out so well that it was difficult to see its bamboo-like stems and floppy leaves. Now, it’s at the other end of the fence between the Texas pistache and the crepe we started from a cutting.  In summer, it gets lots of shade, with bits of filtered sun, and more sun in winter.  In its new location, you can see the tip of the cycad I moved earlier this year.  It doesn’t look great, so I’m thinking of replacing it with a dioon to keep the bamboo palm company. 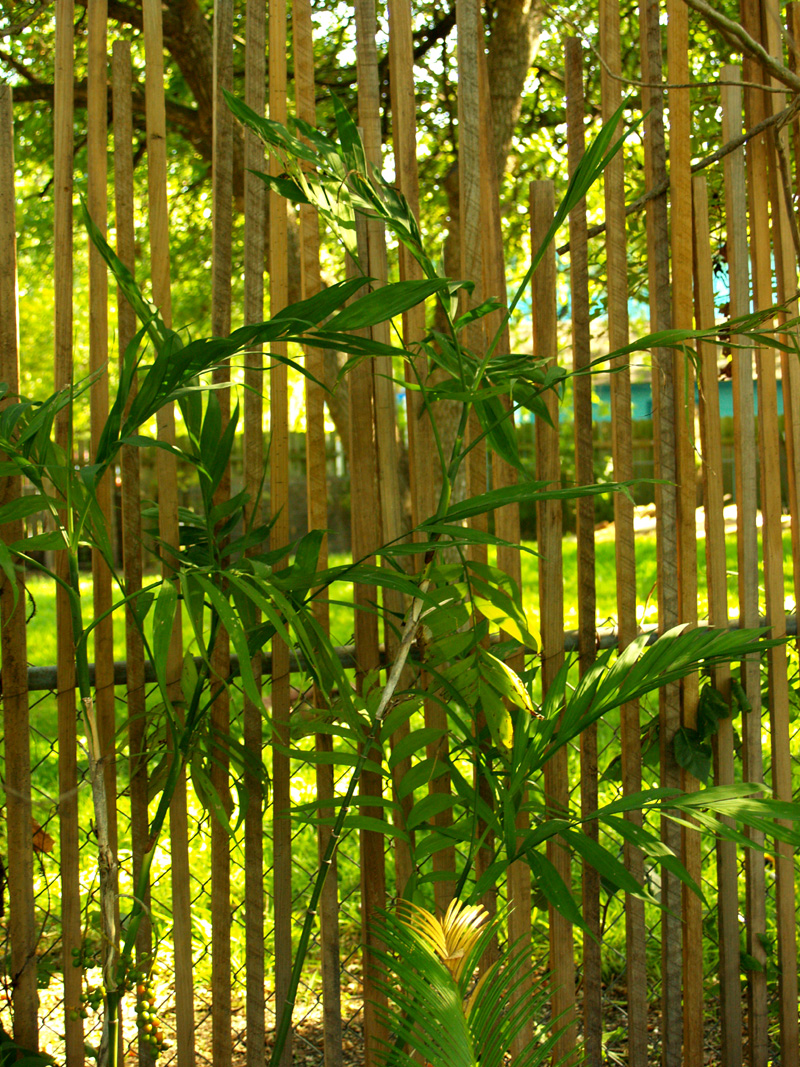 Update: the Satsuma orange I moved a few weeks ago from container to ground is so healthy that it’s attracting swallowtails to birth their progeny. I didn’t photograph the eggs I’ve seen (tiny orange dots) but here’s some larvae from two weeks ago. 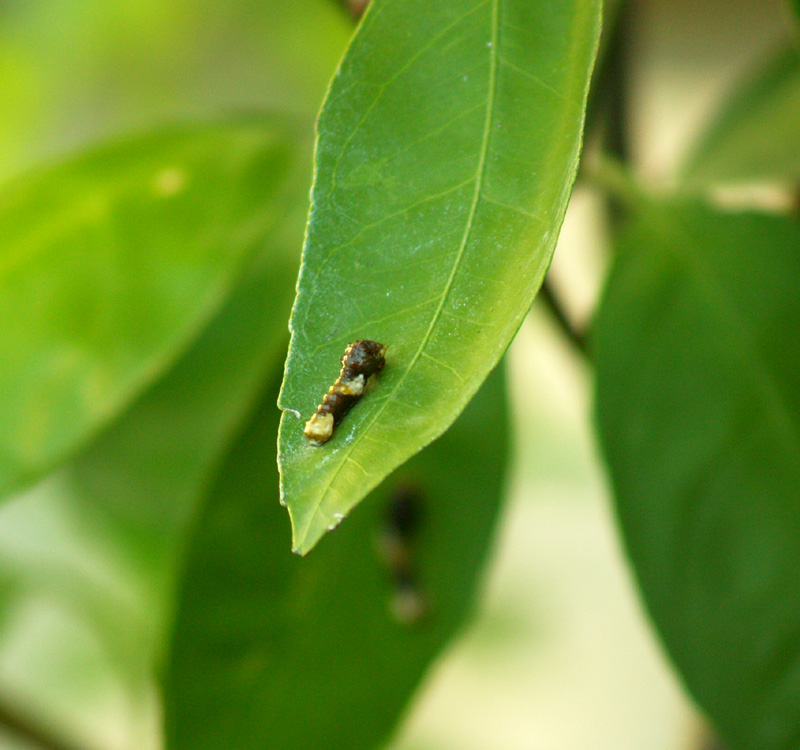 Here’s one guy a week later. 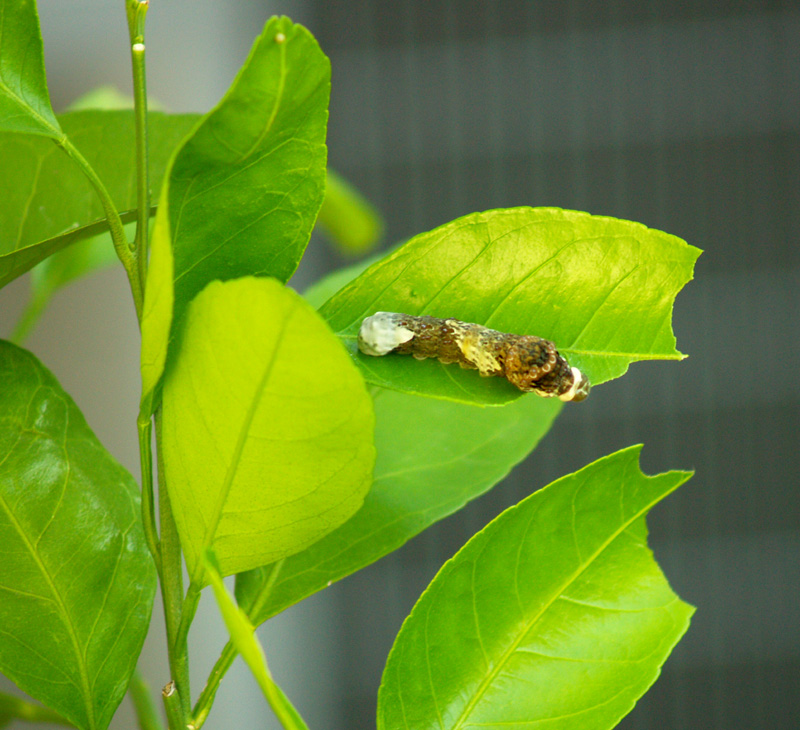 No longer is the plant chlorotic, and since it’s growing new leaves like crazy, I don’t mind sacrificing a few for future butterflies.  But once the sun comes out, these caterpillars move fast!  Just as I’d figure out the best angle and fight the sun, off they’d go. 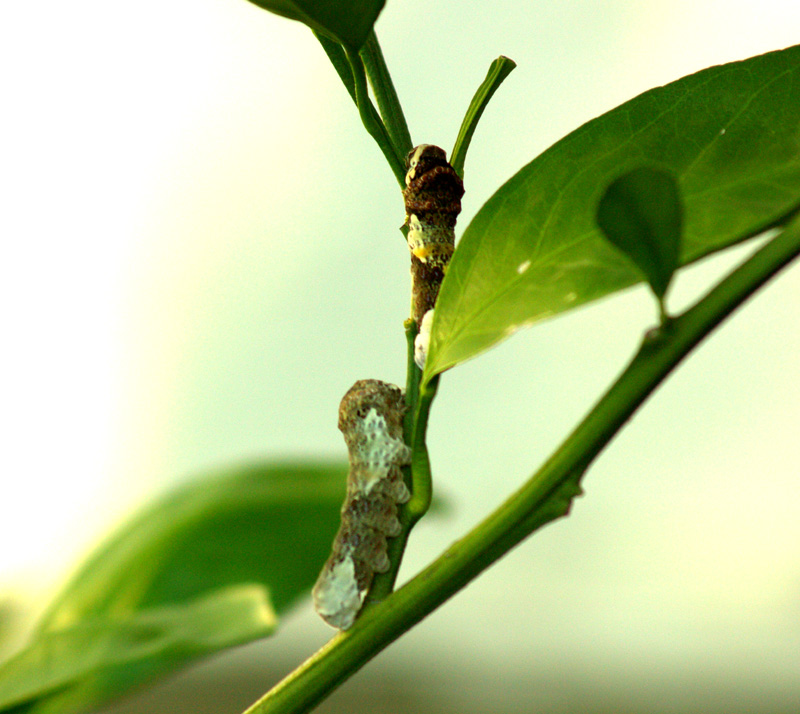 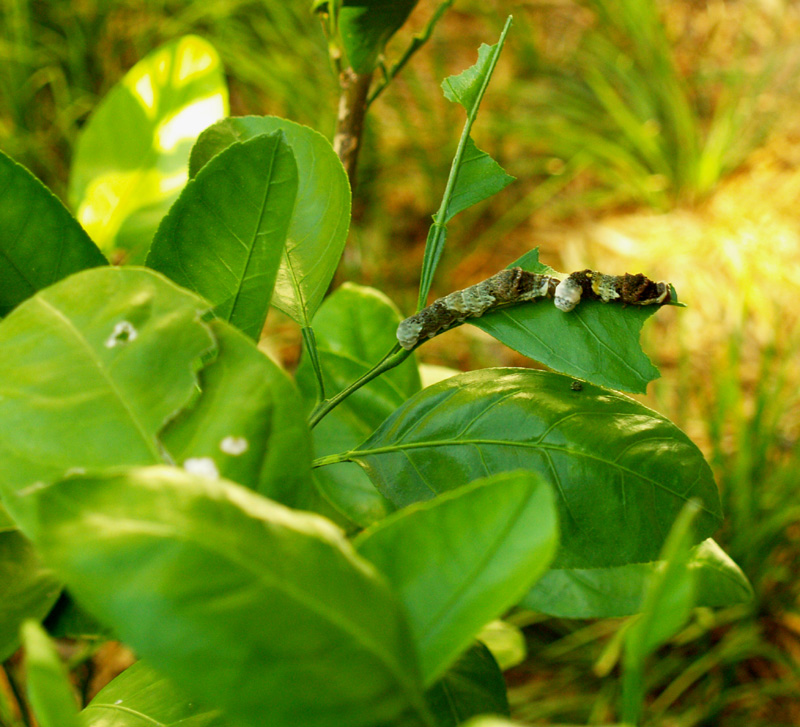 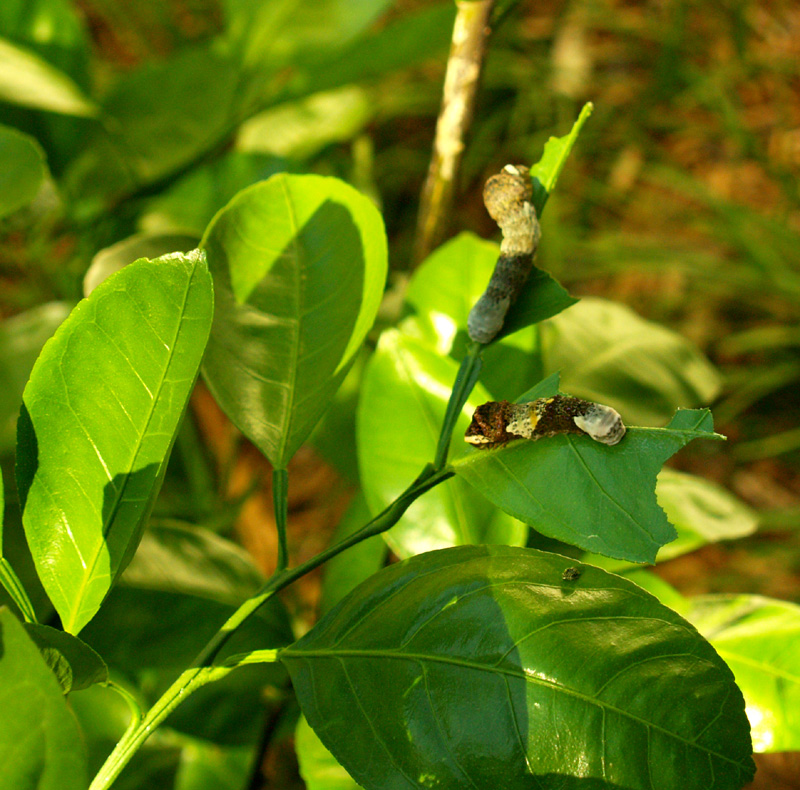 Around the corner, here’s the Lindheimer muhly in the front bed. 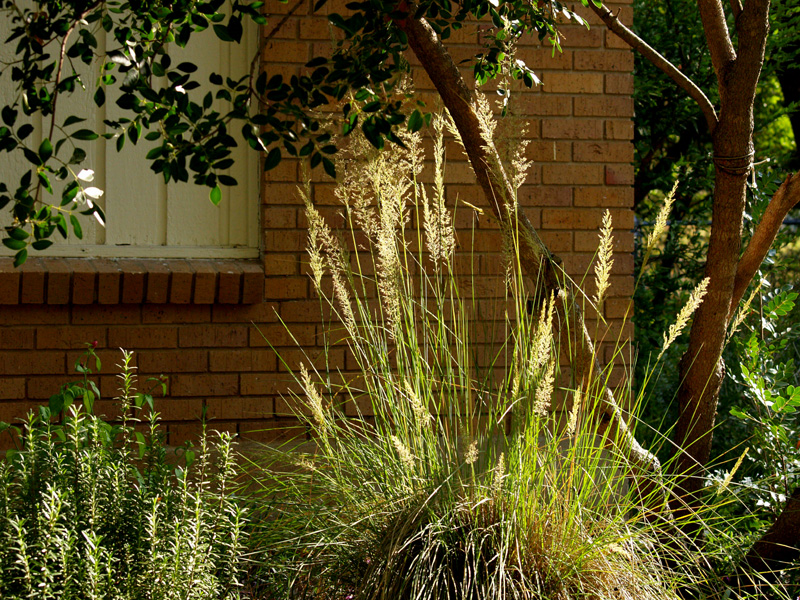 I’m so glad it made it, since it’s one of our favorite fall show-offs. It’s the first thing we notice when we round the bend down our street. But it half-rotted after summer 2007’s rain. Late winter, when I cut it back, I pulled off the dead stuff, too, and dumped everything on the compost pile to feather a few nests. (The birds found it fast!).  Its back half looks like a chain saw got it, but it hung in there, not as glorious as in past days, but still determined to gather our admiration. 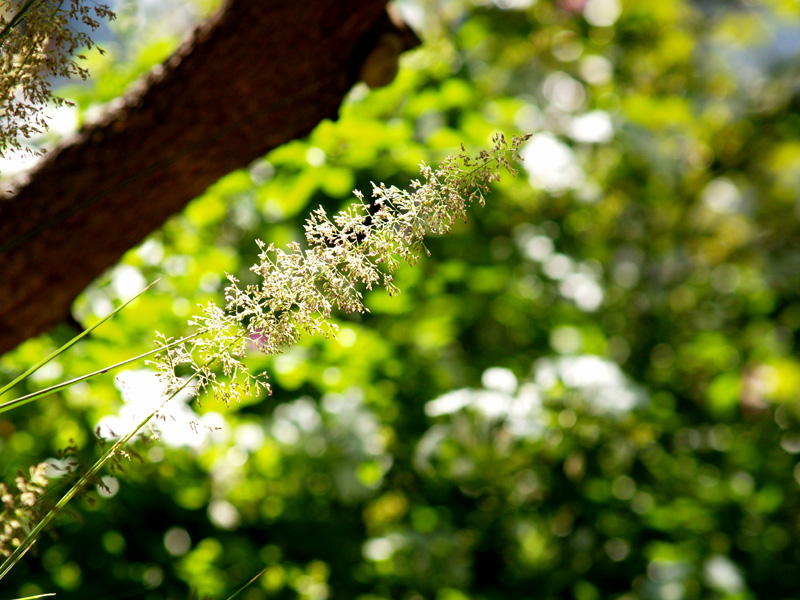 By the way, I’m thinking of putting a bamboo muhly in that blank space against the brick corner.  Any ideas?  Every week I change candidates. . .it’s time to make a decision!

In back, I couldn’t resist another shot of the Salvia regla and plumbago under the Chinese pistache. It’s such a big deal to me because I thought they’d NEVER fill out. It won’t be bare, either, when they freeze back; various bulbs are already jumping out to take over in a few months. 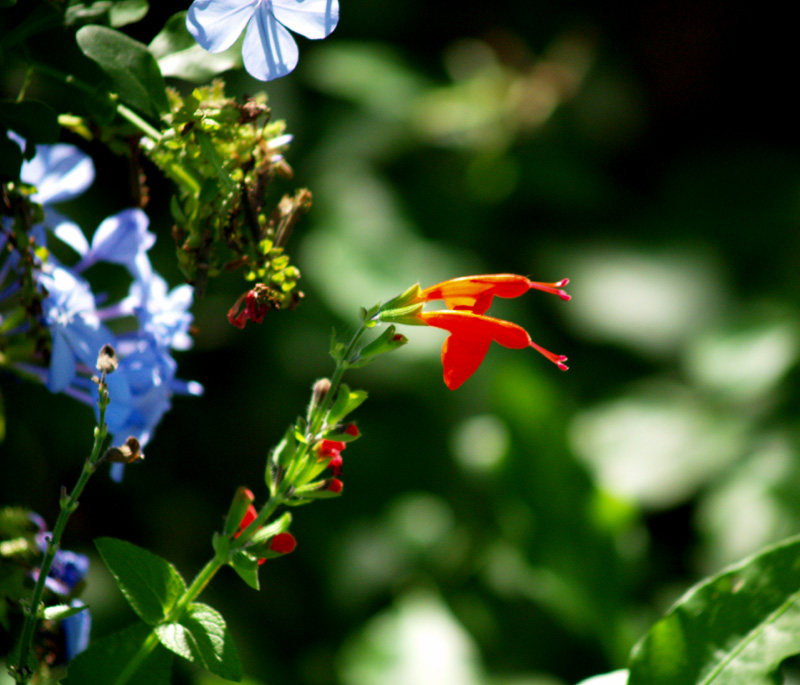 In the crepe bed, here’s the Mexican mint marigold against the artemesia and Dicliptera suberecta.  Probably needs to move to a sunnier spot this spring. 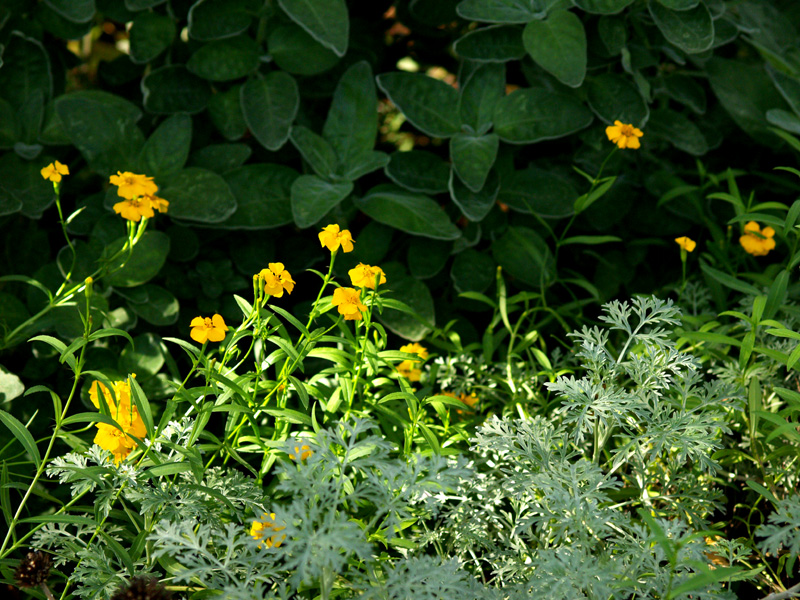 On Amelia’s fence, the mutabilis rose bloomed again.  This guy needs a lot of shaping this February. 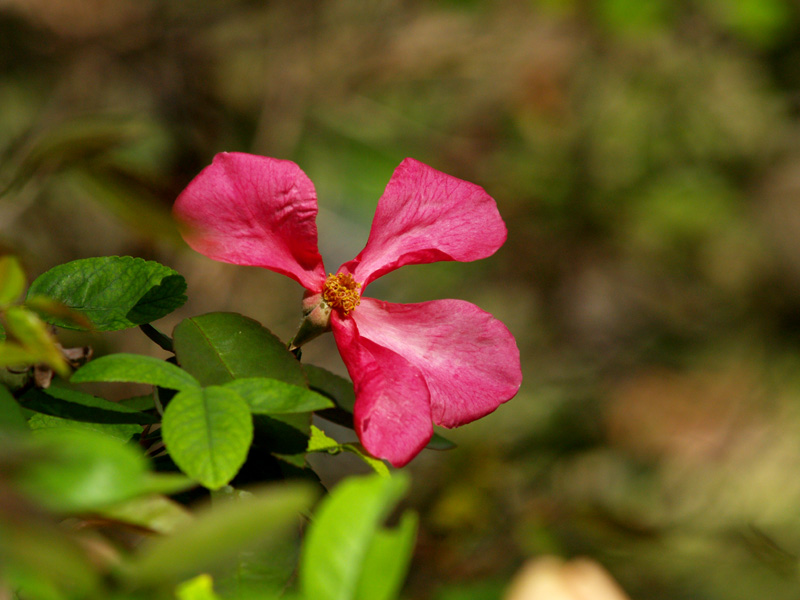 On the shed, the climbing Cecile Brunner is popping a few flowers. 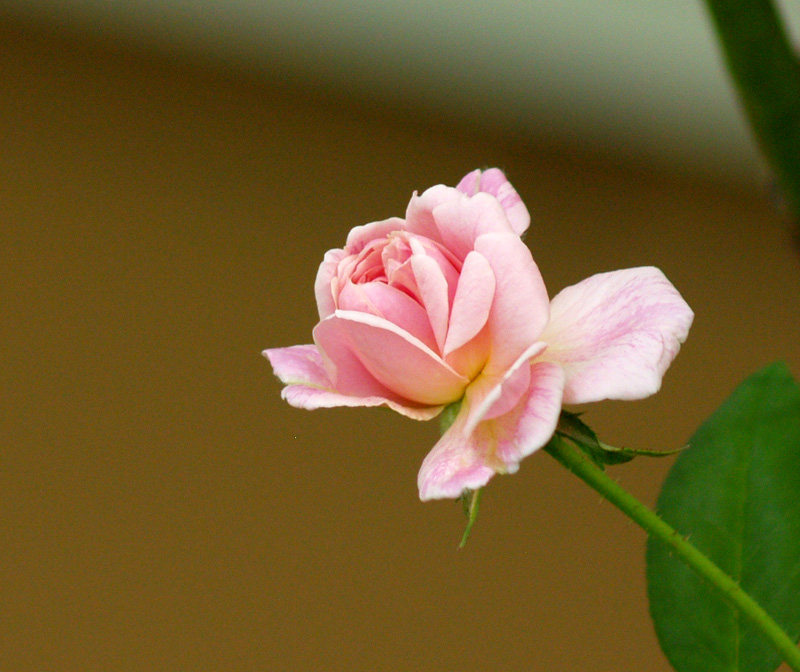 Over the years, I’ve seen this garden through every possible weather situation, and somehow, it keeps on going. Mainly, I’m in love with my plants, even when they’re scruffy, and I thank people like Scott and Lauren who remind me that that’s okay.

Finally, if you haven’t had a chance yet to take our survey (click on the button on the sidebar) on how to improve our web site to serve you, we’d sure love your input! Until next week, Linda