Although I count on fellow gardeners for new plant ideas, I also rely on them for design and how-to tips. You can call this “stealing” or “sharing!” But I’ve never met a gardener who wasn’t thrilled to provide step-by-step details of their handiwork. Then someone “steals” my rendition, gives it a personal twist, and someone else “steals” that.  It’s a fabulous passalong tradition.

And going on garden tours is a super way to “steal” ideas!  You know, until a few years ago, most tours were neighborhood or club-related events.  It’s only recently that “open to everyone” tours got started, as a way for groups to support their community education.

One you don’t want to miss is the Lady Bird Johnson Wildflower Center Gardens on Tour, coming up Saturday, May 9.  This week on CTG, Tom and Andrea DeLong-Amaya from the LBJWC take a look at what you’ll see this year. On our own tour, get a behind-the-scenes story of one of the garden’s renovations, a wildlife and native plant habitat a stone’s throw from mown lawns.

I’ve learned a lot from these tours, though my garden is certainly not all native and I still have lawn.  Still, thanks to education and availability, I’ve extended way beyond a few bluebonnet seeds that was first venture into native plants. 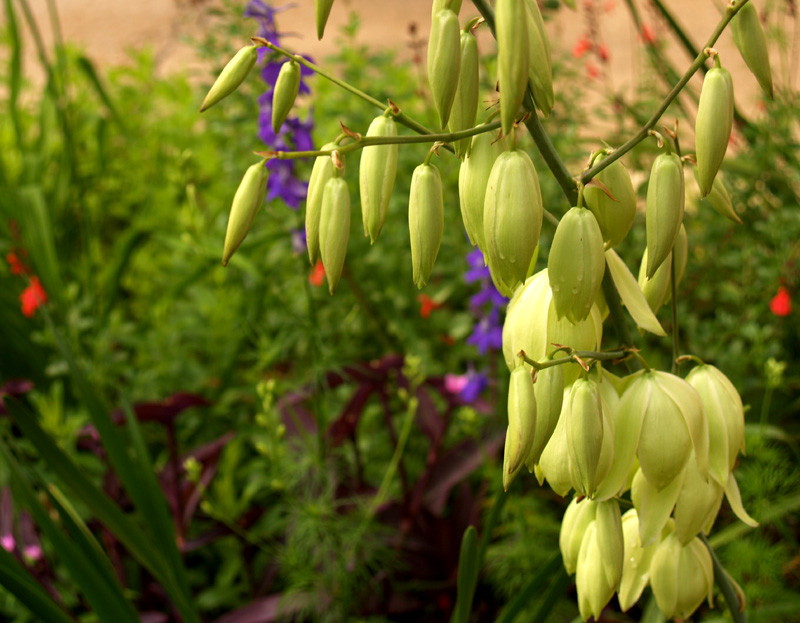 In the cat cove, here’s my second attempt at blackfoot daisy.  My first attempt long ago on my clay soil was a bust, but I stole a few ideas, and we’ll see if this time it works. 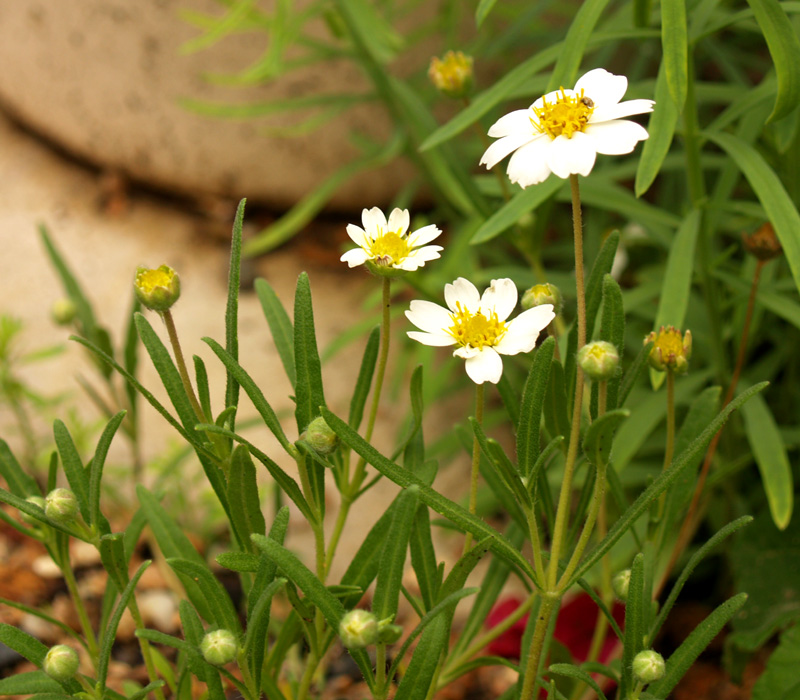 Just to their left are white winecups in their second year. 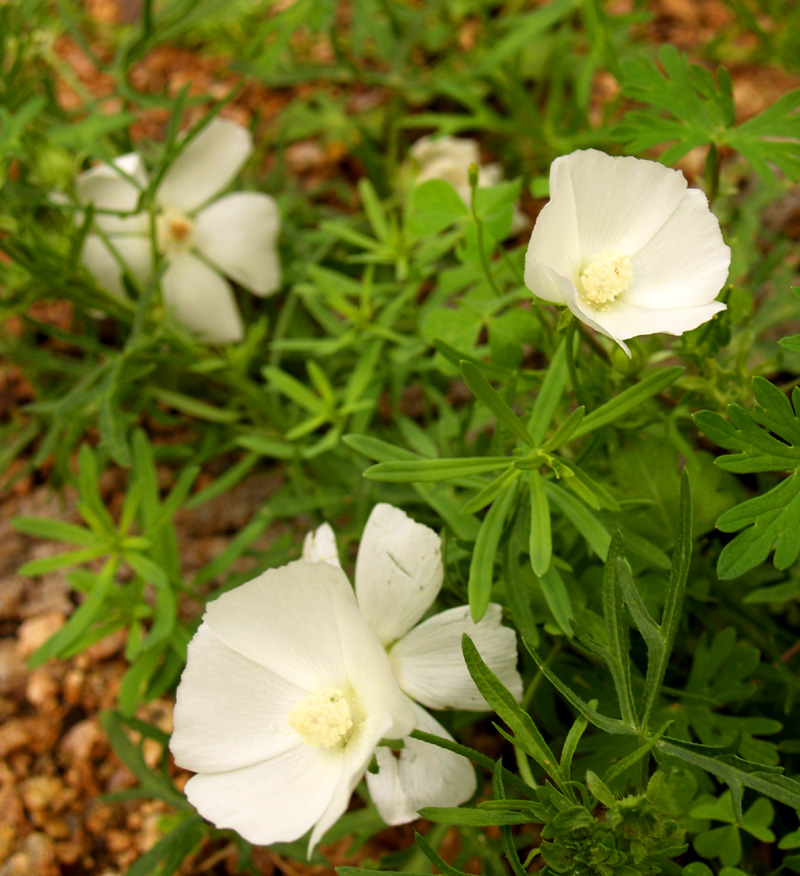 In back of them, pavonia (rock rose) with a purple winecup about to burst. 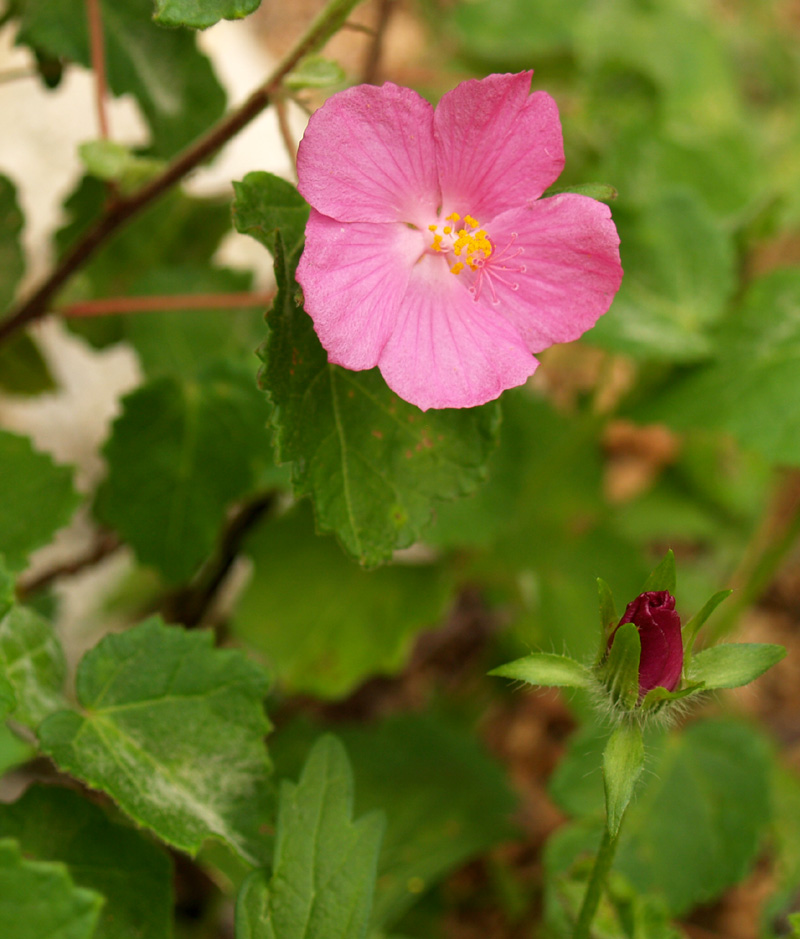 Winecups are blooming all over the cat cove, the blue-eyed grass and Gulf penstemon are still going, and so is the calylophus, for yet another picture! 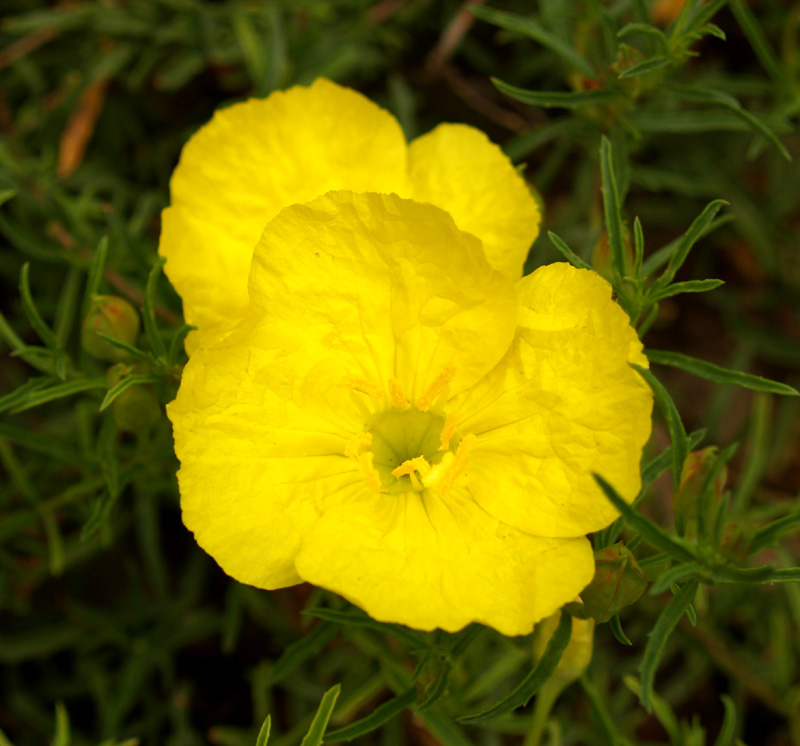 I stick winecups any place I can, like this one in the crape bed, a resident now for years. 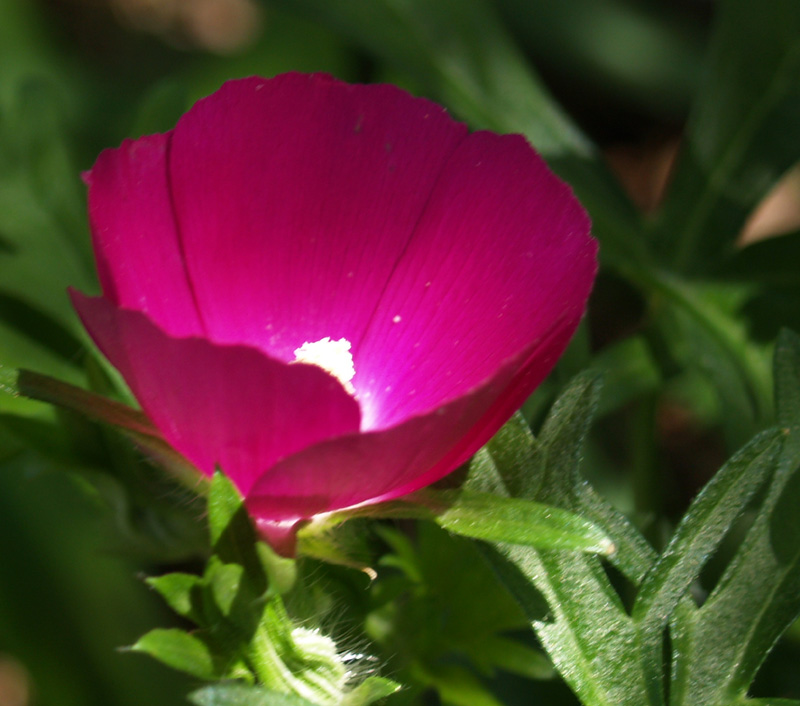 On the former promontory path to the creek view (now overgrown, yahoo, with the mountain laurels!), the native Packera obovata and Salvia lyrata are casting seeds. The spiderworts are setting seeds while the leucojum leaves brown up. Oxalis transition the spring flowers to the ones on the horizon, including turks cap and wedelia. 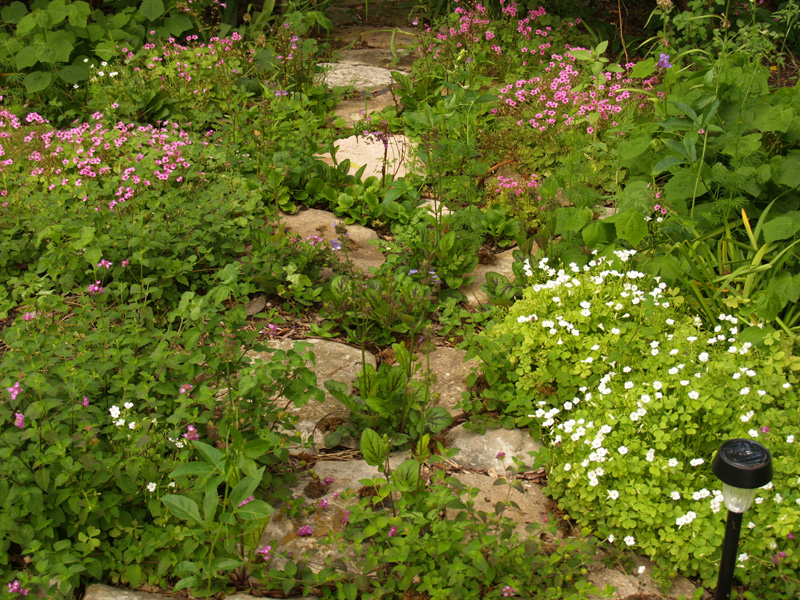 In former photinia-ville, I do have natives, but also non-natives, like the roses I moved to its sunnier habitat.  Mrs. Oakley Fisher is indeed content. 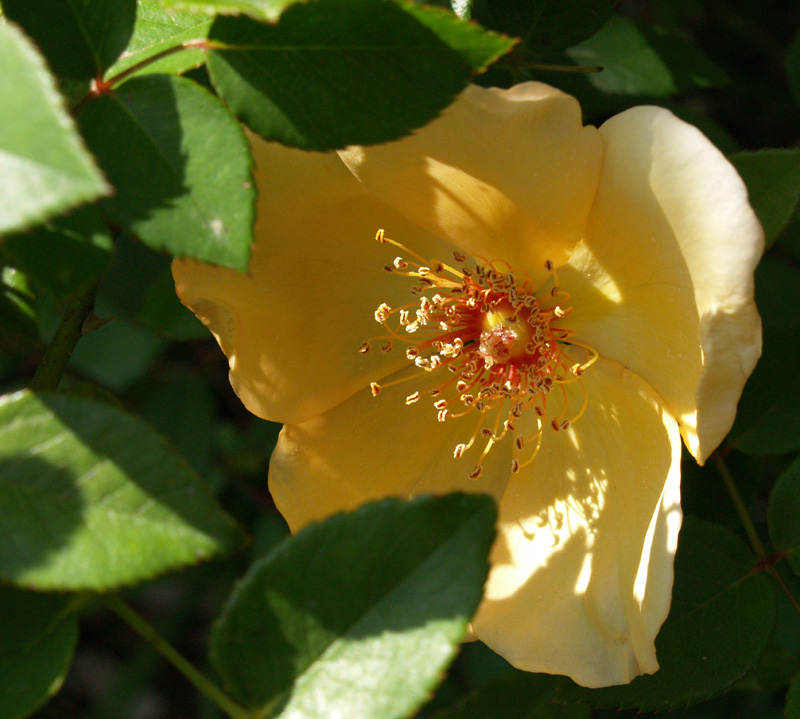 So is the Iceberg rose in front of her.  I’ve moved these roses so many times to follow the sun that I was sure they’d get disgusted with me. 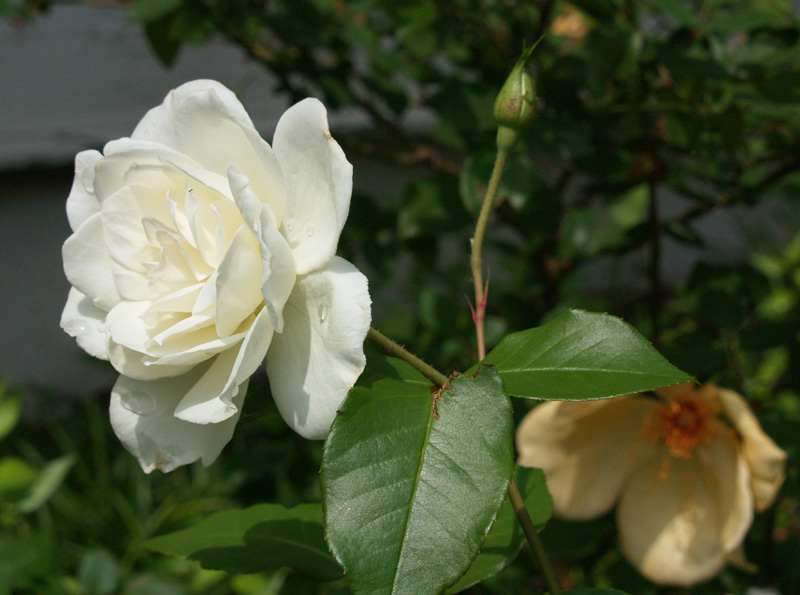 On the patio, this collection is not native, but wonderful all the same.  I love carnations, and these are so fragrant that we can get a whiff even from the patio table. Behind them are newly seeded zinnias. On the rainy day between welcome outbursts, I took a knife and gently pricked out one that was too close to its neighbor, and moved it to the other side. The other container holds Spicy Globe basil, one of my favorites, especially for a container. 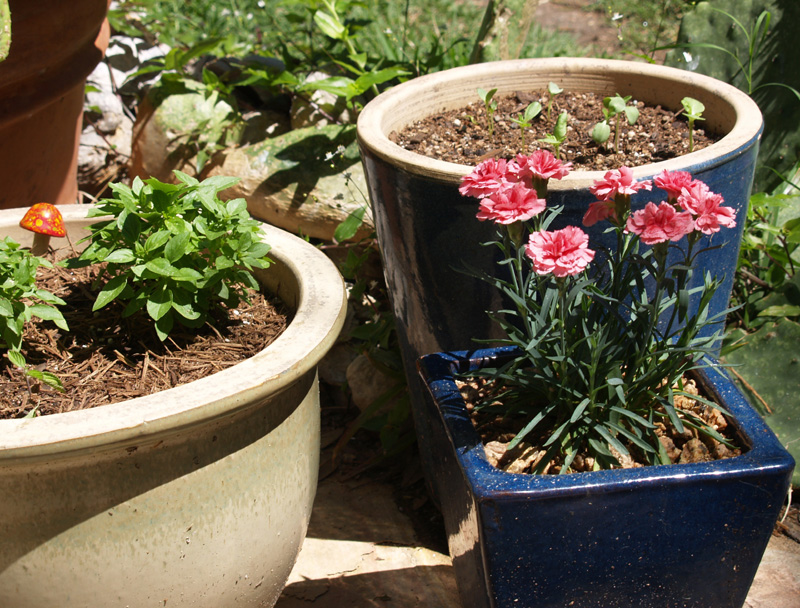 Finally, our own John Dromgoole is mentioned in Time magazine!