Here’s a good story behind Tom’s interview this week.  A few months ago, gardener and Mundi musician Darrel Mayers got in touch to see if we wanted to do another segment with Kurt Hudgeons from It’s About Thyme.  Yes!  Instead of creative water features you can do for cheap (one of Kurt’s specialties–check out his free workshops at It’s About Thyme), we went for another of his passions: plumerias. 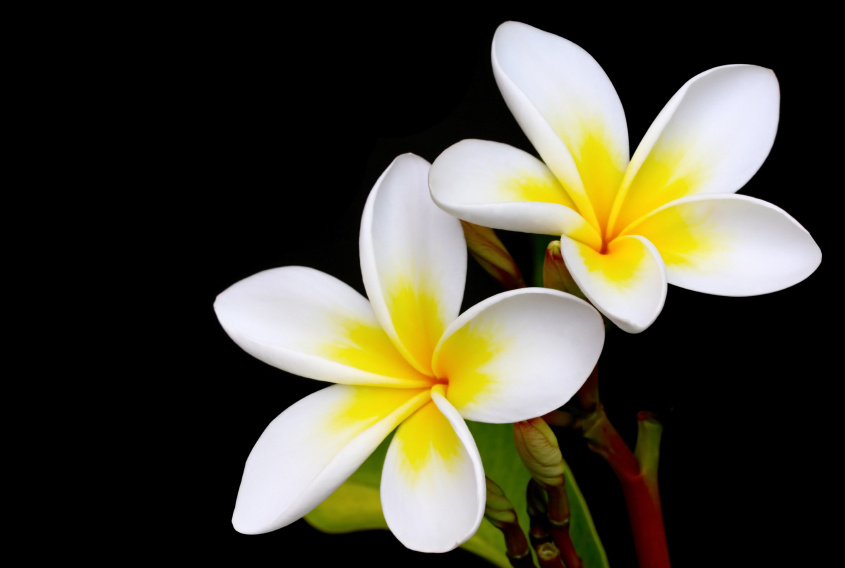 Kurt grows over a hundred varieties at his home nursery.  His website, Aloha Plumerias, just launched, but please note the new domain name since CTG taped.  It’s now “net,” not “com”.  Or get in touch at It’s About Thyme.

Not only does Kurt explain general plumeria care, he shows how to propagate from cuttings and seeds. I was amazed at how little attention and water plumerias need to grace our gardens with stellar form and fragrance. And in winter, just pull ’em up and stick the bare roots in the shed.

As coincidence would have it, the next gardens we taped had plumerias!  Another coincidence is that Greg told me how he loved them from his days in Hawaii as a kid, where his dad was stationed.  His dad’s behind the camera for this shot of Greg, his mom, my dear MIL Miki, and Greg’s sister. 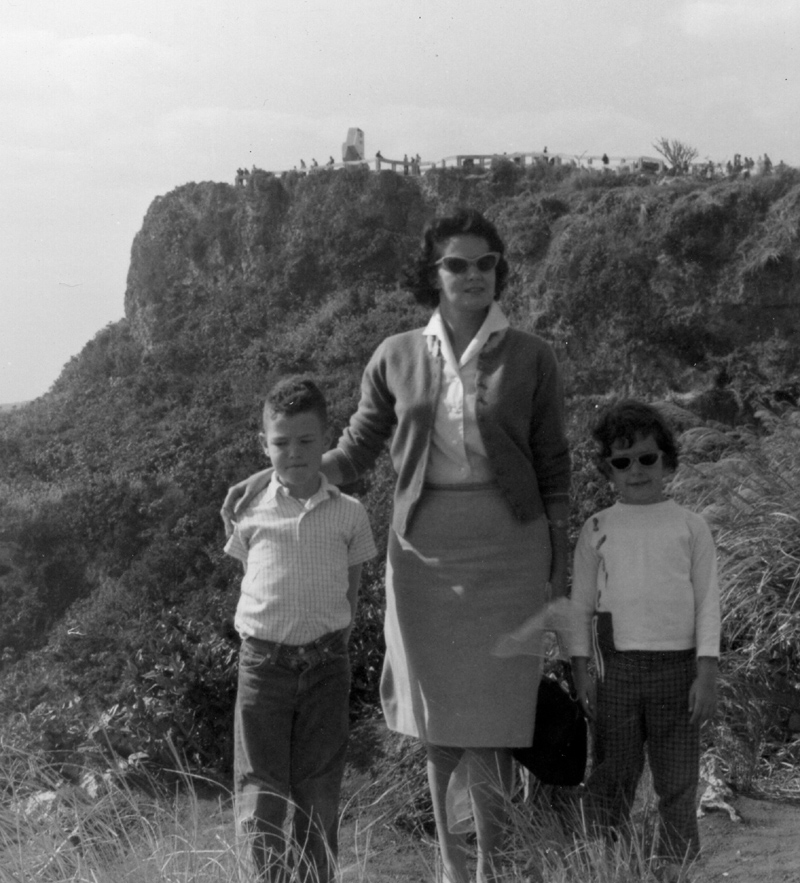 Then, I recalled that our neighbors Tom & Priscilla grew them, and I called to see how they worked for them.  Not only do they share Kurt’s passion, they shared it with me.  The next day they gave me one that they’d started from a cutting. Talk about gardener connectivity!

I kept it in the shed until the last frost.  Then, I planted it in a pot on top of the cottonwood stump in the cat cove.  Daily, I hovered like a new mom to see if it worked.  With the first warm day, the leaves were out. 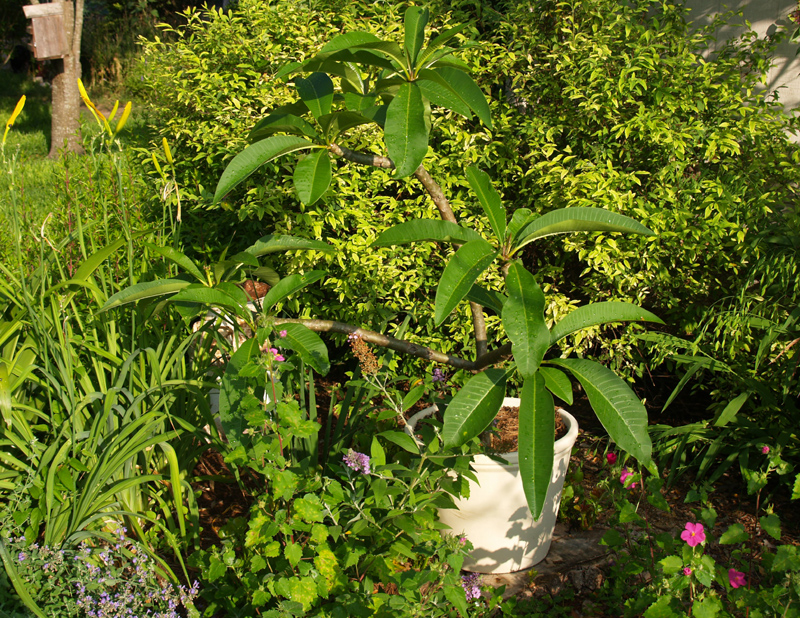 Now, they get more lustrous by the day, and it looks like a flower is coming. I can’t wait to get my first whiff! 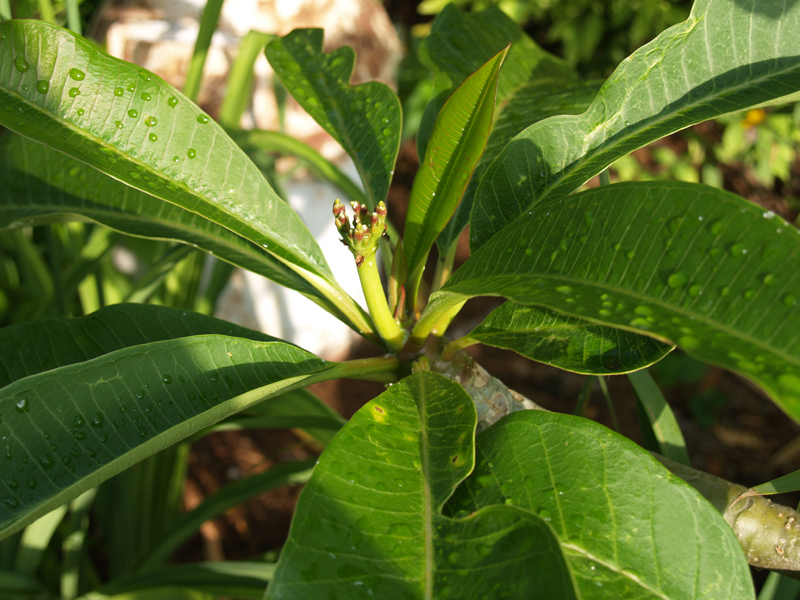 On first-time plants, after hearing about it so much, I decided to try just one heartleaf skullcap (Scutellaria ovata). 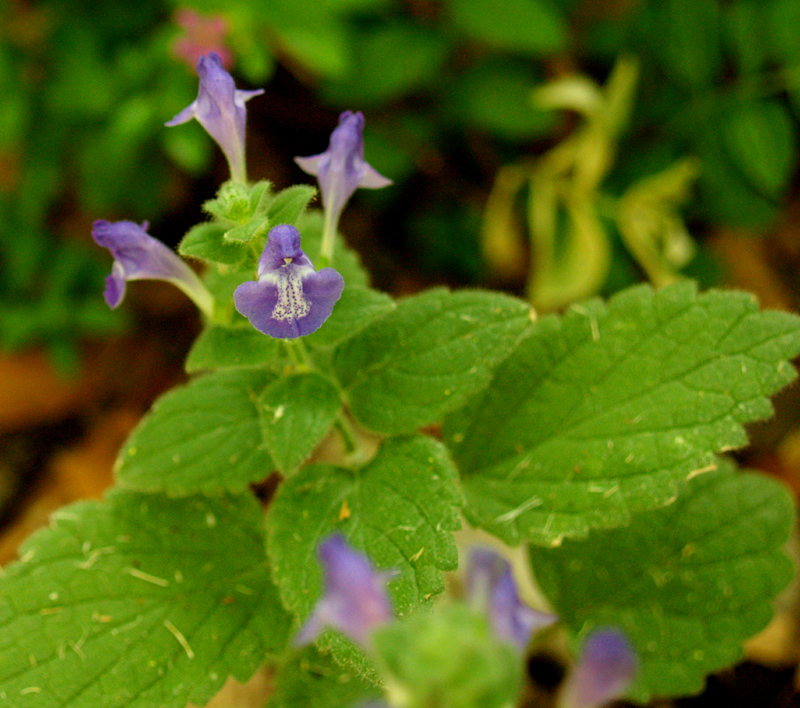 Of course, now I want more!    I’m a total sucker for grayish-toned leaves against lavender.  I put this one in the front bed where it gets morning shade and muted afternoon sun with a brief sharp blast.  I’ve seen it in gardens where it spreads and spreads, so I hope it does the same for me.

Another first and a glorious sight in the front bed:  this Hymenocallis ‘Sulphur Queen.’ I got it at Gardens in April.  Last weekend I raced back for more for the Amelia side bed.  I may go back for more in front.  I love that sweet yellow to pick up where columbines leave off. 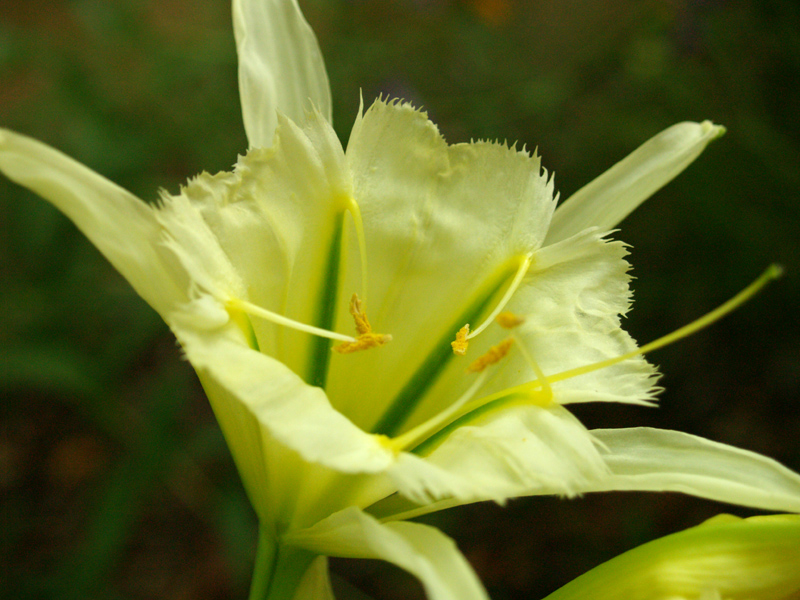 Here’s another first:  Mexican plum fruits big enough to see!  Usually they’ve disappeared before getting larger than a bead. 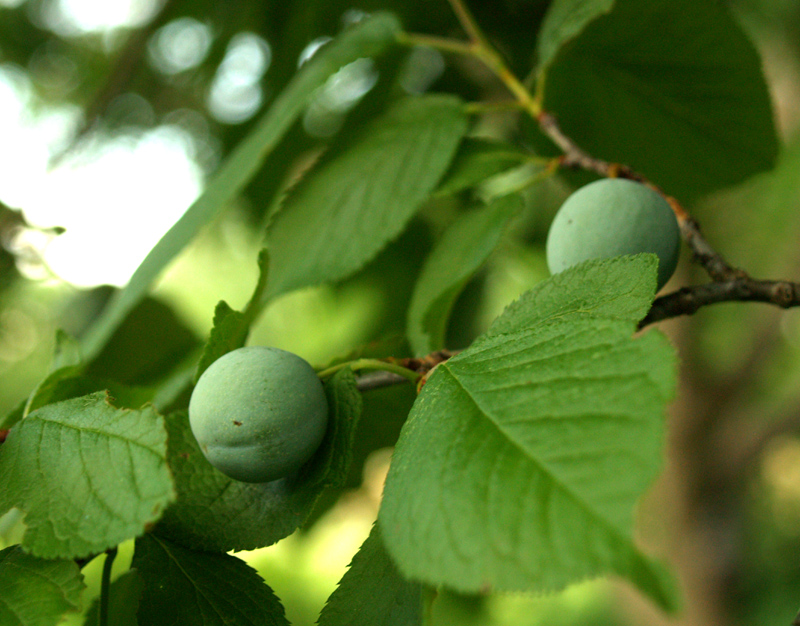 At the cat cove’s entrance, this pink skullcap (Scutellaria suffrutescens) showed back up after going on vacation for a couple of years. His companions are coming right along, so I hope to have an entrance carpet of pink before long. 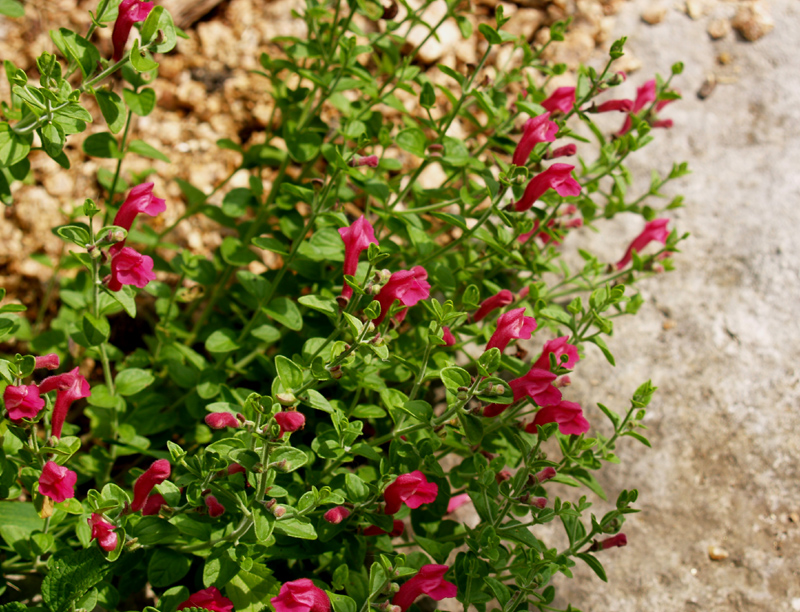 On the patio, the first zinnia, ‘Apricot Blush’, bloomed in its pot. It softens to apricot as it ages and the yellow disk flowers emerge. In the den bed beyond the patio, one Valentine rose is blooming again. 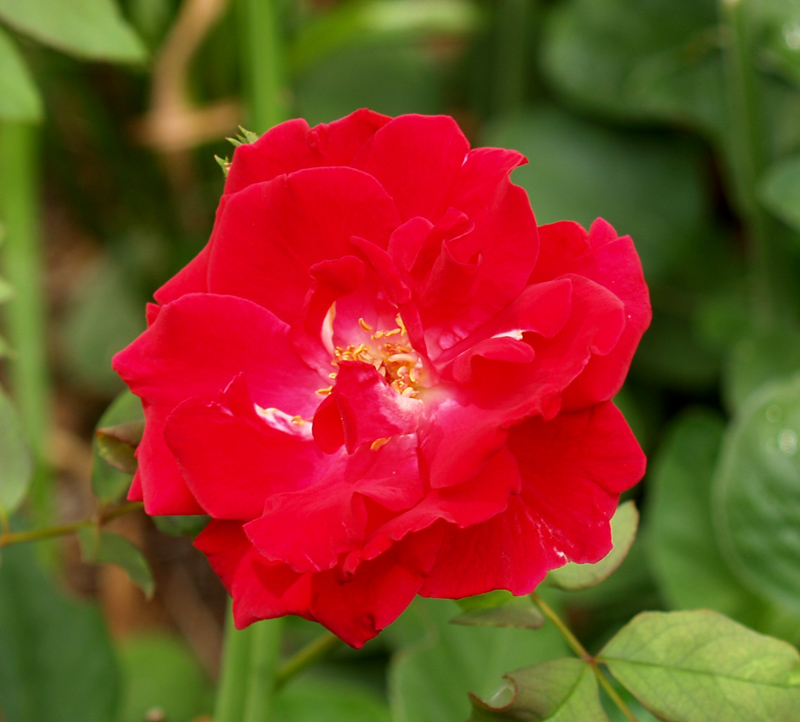 However, the one at the other end was almost gone.  Just nine feet away, it’s just in too much shade. I was about to move it into a work pot until I found another spot for it this fall.  Then, I spied the messed-up prickly pear cactus in its big patio pot.  Bingo!  Off to the nursery for more potting soil.

Even though my Opuntia is supposedly spineless, I know better. I used the kitchen tongs to toss the pads into a pail after I chopped them off.  Greg hoisted the heavy pot onto its side, and with some engineering innovation, especially the water hose, unearthed its mass.

In the meantime, I’d pulled out the resident mint and wrapped it in wet paper towels to stay cool in the house.

The newly moved rose looks a bit woebegone right now, but it’s a valiant Valentine, and I bet it won’t take long to be a worthy fellow to its patio cohorts. In fact, since I took this picture, new leaves are coming out like crazy. Ditto for the mint, since I’m shading it with newspaper and misting it until it takes firm hold. 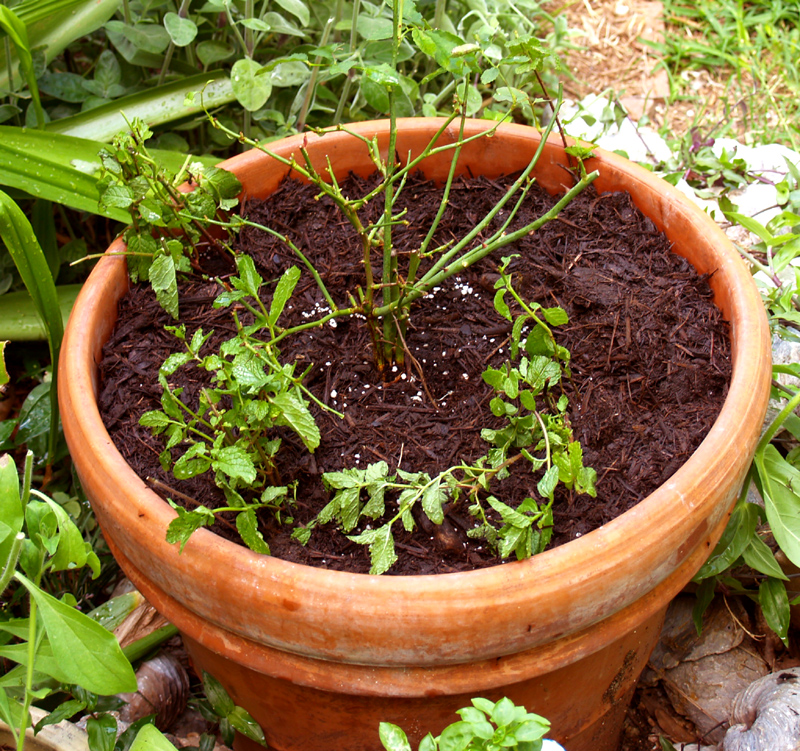 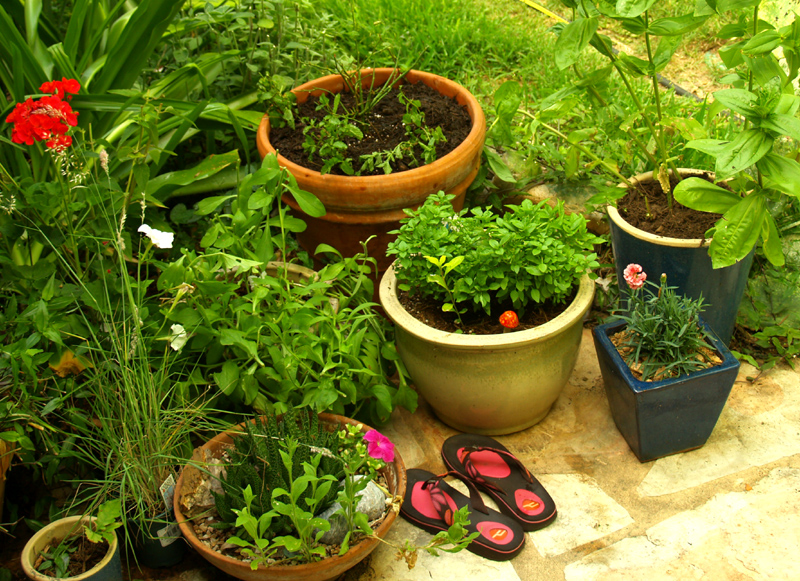