We all make garden mistakes; that’s how we learn. But to spare you some of the ones we’ve made, this week on CTG, Tom meets with designer and garden coach Colleen Dieter about the most common “oopsies.” Colleen has some great tips that had us saying, “Oops!”

What are the lessons you’ve learned the hard way?  I’d love to know and pass along to fellow dirt-huggers.

You’ll also meet new gardener Brent Henry. Well, he was a new gardener when we taped this almost two years ago.  Now, he’s an experienced and intrepid plant explorer.  He’s expanded his garden a lot, especially with succulents and other interesting discoveries that can take low water and an energetic puppy!

But his first garden is wonderful.  I fell in love with Brent for his philosophy of exploration and learning about something new.  A lot of first gardeners think that it’s over in one weekend or a year.  Actually, the first plant sets you on a journey that never ends. Brent inspires us to take the first step and keep on going.

I’m certainly still on that journey, but to see what’s blooming in my garden, check out the Bloom Day post from yesterday!  Oh, forgot this one, the white-blooming form of Cenizo silverado in former photinia-ville. 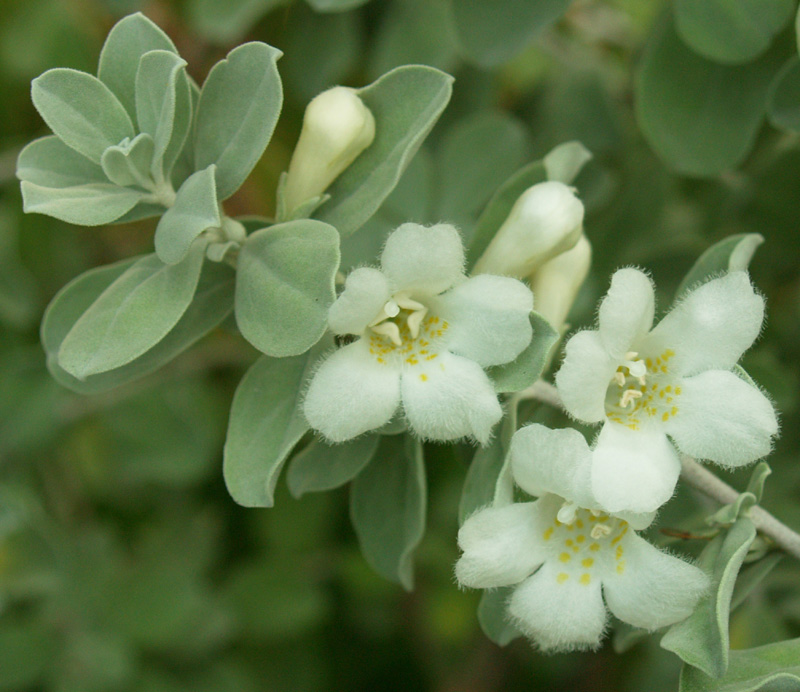 I’m not sure if I’ll have anything to show you the rest of the summer, since things are getting grim. Trees are seriously at risk. Every day, I get questions from viewers who are worried about their trees. If you’ve got a serious problem, check out an arborist, since I am definitely not!  But for many trees dropping leaves and yellowing, what’s happening is drought stress that’s been going on for over three years.

Water.  That’s the key.  No fertilizer.  Avoid compacting the soil or causing further stress.  Last weekend, I put out a slow drip around our lacebark elm in front. 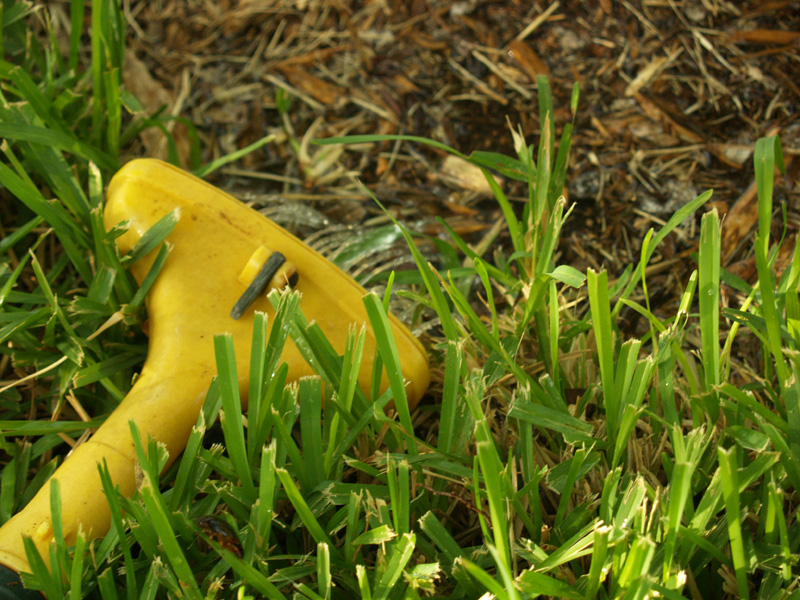 I moved the hose from time to time.  After an hour, I stuck my finger in.  Still dry past 1/4″ inch.  I kept it up for another two hours, then got scared about the expense.  Really, it should go for hours.

If you have a tree that you planted this year or even last, it’s worth it to give it a DEEP soaking. Ditto for any newly planted shrubs.  If you think your overhead sprinkler or irrigation system is doing the job, it isn’t. If you think a quick drink with the hose is doing it, it’s not.  You want a slow trickle to really soak down for inches. For new trees and shrubs, let them dry out, but keep an eye on it and do the deep soaking when the soil is dry.

After years, we finally got a great crop of fruit on the Mexican plum. Sadly, they’re falling off by the hundreds.  We gather them for the bird feeder, but no one seems to want them.  The wildlife is hungry, but I guess they want ripe fruit. 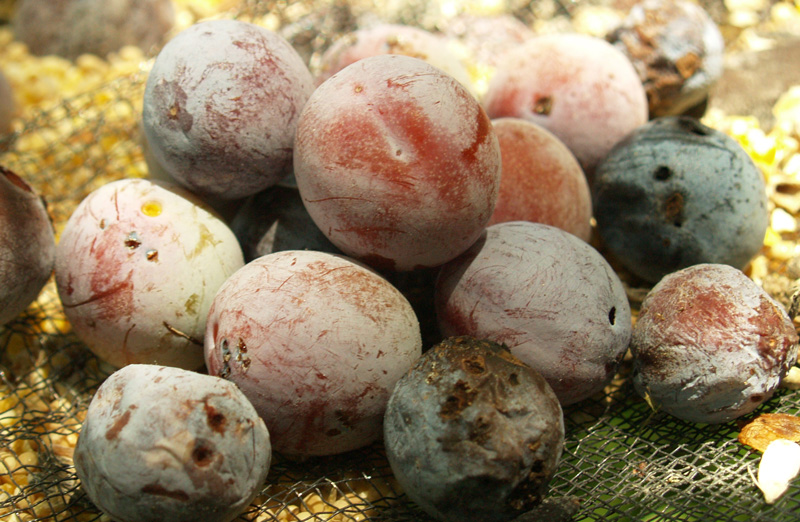 The only good thing about the heat: it’s a safe time to prune your oaks susceptible to oak wilt. For more information, check out this site.

It turned out that water wasn’t the problem for our year-old star jasmine. I should have recognized this problem, but it’s been years since I’ve seen it in our yard. 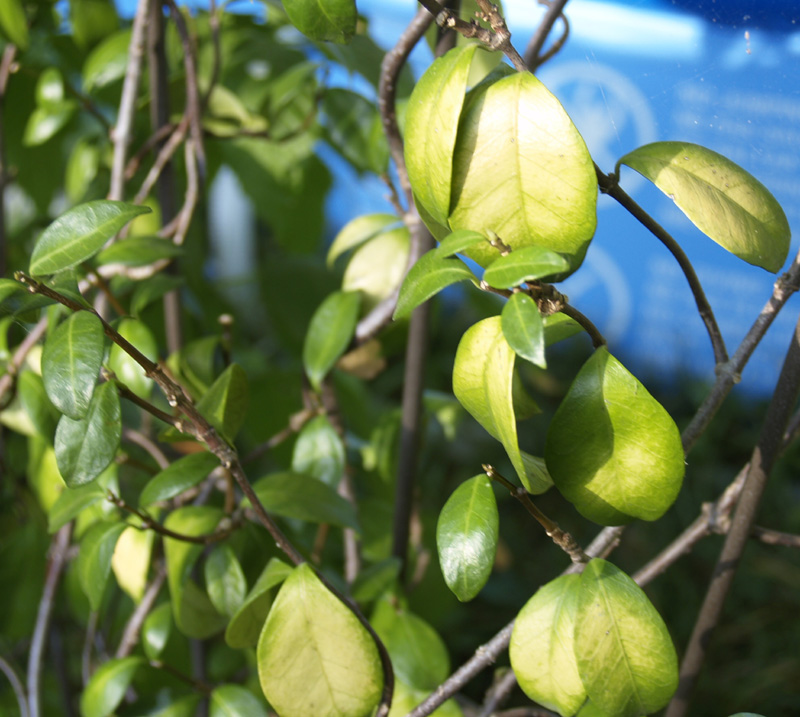 It’s not a nutrient deficiency, either. Okay, it is, but the real culprit:  fire ants.  We learned this the hard way when we put a slow hose on it.  As Greg checked out the soil moisture, he got such a furious ant attack that he jumped into the nearby kiddie pool. They continued to bite him underwater.  He raced back to the patio for a douse from an aloe vera plant.  Later, in the side yard, they went after me.

At Buck Moore’s, I got the Green Light spinosad product (there are others). 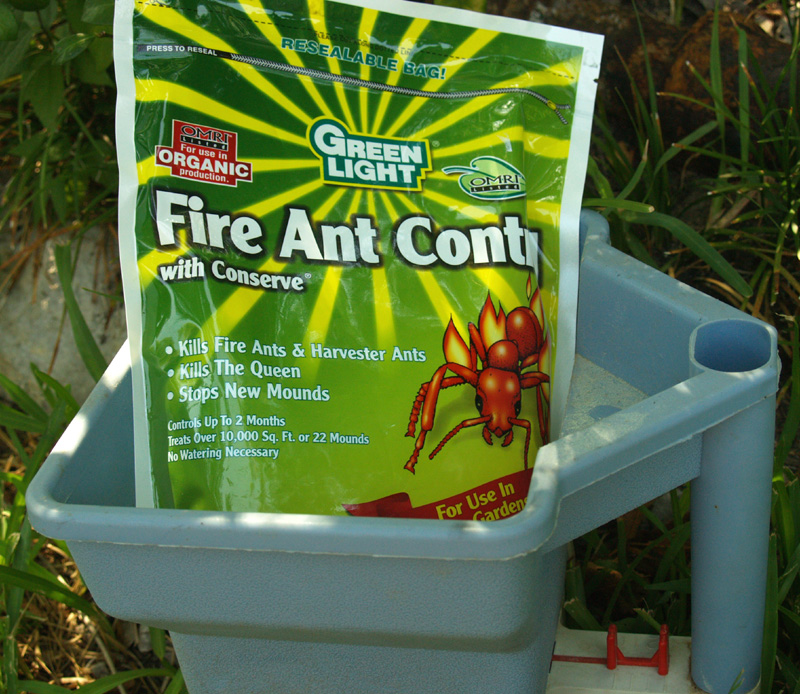 I hate to spread things around the yard, but the products with spinosad are certified for organic gardens and won’t harm our beneficial insects, the pets, or us.

Until now, I was sure we just had native ants.  Perhaps they are, but just really mad.  I don’t stick around long enough to examine them (and not sure if I could tell which is which anyway.) My attitude about ants:  if they don’t bother me, I don’t bother them, because they do good things for the garden. But once they chomp us by the hundreds, we take action.

I may have to do another dose in a week, and follow it up with an orange oil drench. Check out this site for the Texas Two-Step fire ant control. I’ve had luck with boiling water, too, but this is not good around plants, and the orange oil isn’t either!  For drenches of any kind, it has to be right on the mound and carefully applied if you don’t want to harm the plants nearby.

With all this stress, our viewer, Nan, made my day with her picture of her Earth Box, with some pretty good-looking tomato plants! 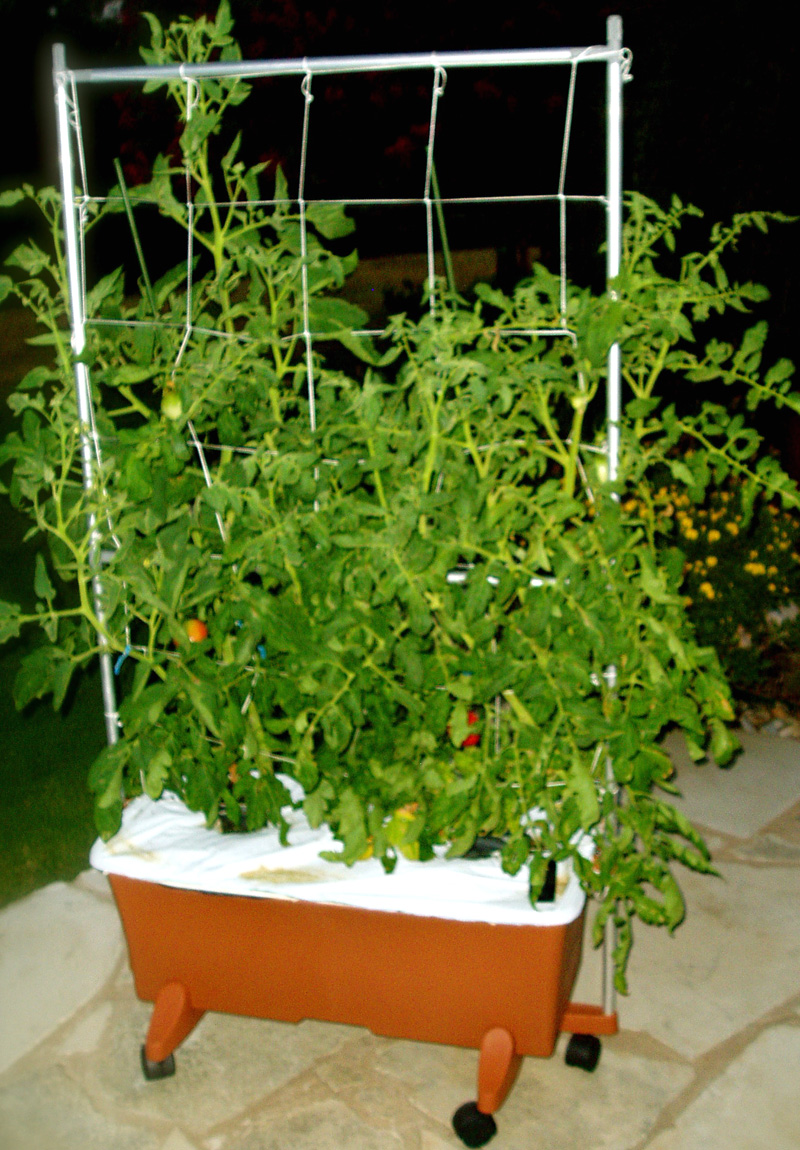 She has a problem with leaf curl on her tomatoes. A nursery recommended Epsom salt for the magnesium, and I recommended liquid seaweed. She’s not seeing any disease or insect problems.  Any ideas from you?

By the way, CTG plans to do a segment on Earth Boxes or their kindred spirits this fall. I thank Nan for her personal confirmation of their success.

Also, does anyone have a source of heirloom ‘Zipper’ cream peas for a viewer? He claims these are super yummy producers in the heat.