I’ve never seen this much chomping in one year. Somehow the mountain laurels have been spared for once, but I’ve never had caterpillars on the larkspur. 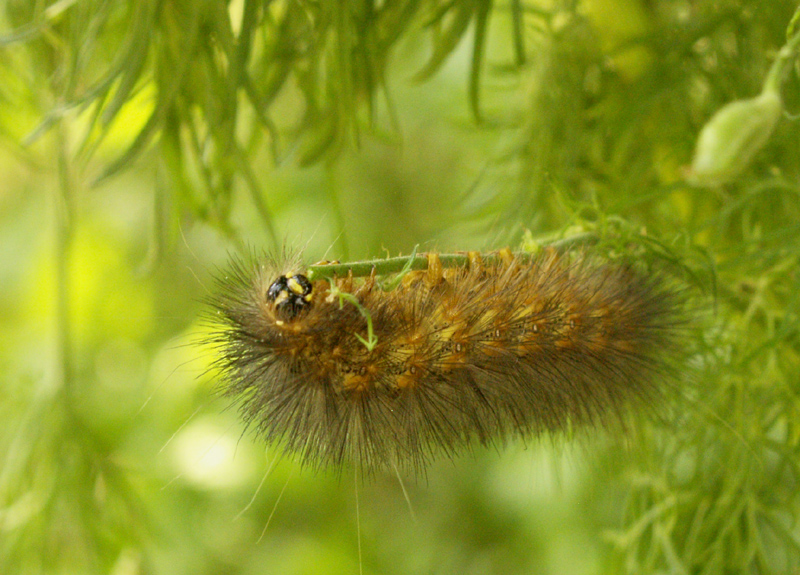 She and her busy team were so pretty that I left them alone. The larkspur was on its way out, anyway.  Meredith at Great Stems thinks it may be a Salt Marsh caterpillar, which is in the same family as the woollybear. Guess we’ll see what moths show up this summer!

A viewer asked what to do with caterpillars EVERYWHERE. Well, you can leave them be. If they’re destroying valuable plants, hand pick them. Or spray Bt (Bacillus thuringiensis). However, I don’t advocate spraying every plant in sight, since you could be killing off every wonderful butterfly or moth pollinator.

Also, baby birds are getting lots of caterpillar num nums right now, including the cardinals who nested in our rose arbor. I’m  not tall enough to get a better shot, but you can sort of see who’s waiting for dinner.  Tiny little beak on the right. Only a few days old. 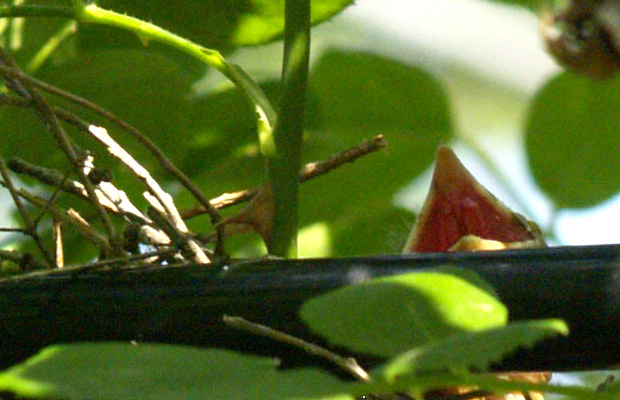 Dad showed up for this feeding, while Mom was in the crape, keeping an eye on me. 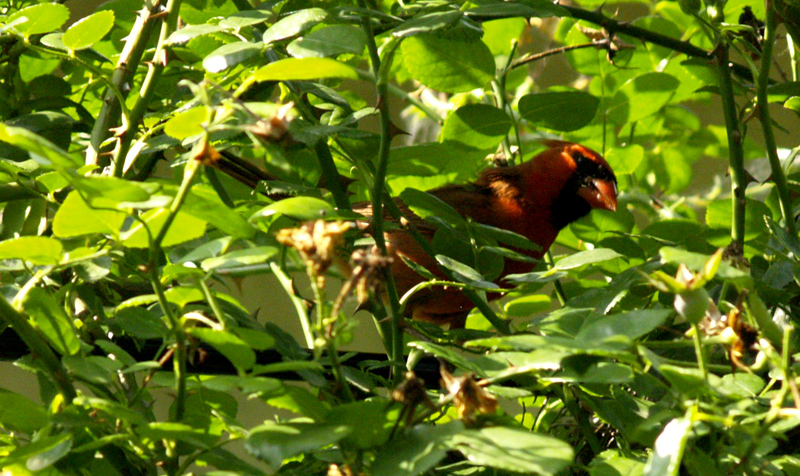 Earlier in the day, I’d found a dead one at the bottom of the arbor, covered in ants. Just after I took the shot of Dad, I saw something catapult from the nest. Another had fallen out and landed in the rose. Carefully, I rescued him and Greg returned him to the nest. I didn’t take a picture since its safety and the parents’ peace of mind was more important.  The night of the surprise storm, I was so worried. No need. Mom cardinal spread herself over the babies.

One last-stand larkspur hangs out in front of the variegated dianella in the crape bed. 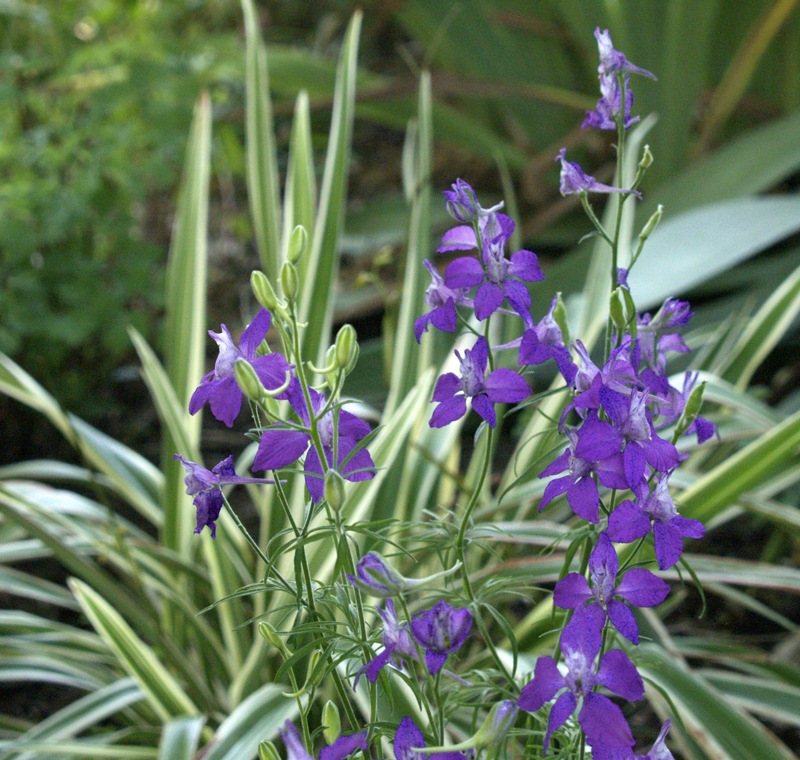 A coneflower leans over the Salvia coccinea ‘Nymph White’.  This was the annual salvia I dug up last fall and overwintered in the patio “greenhouse.” Just had to try it, you know? 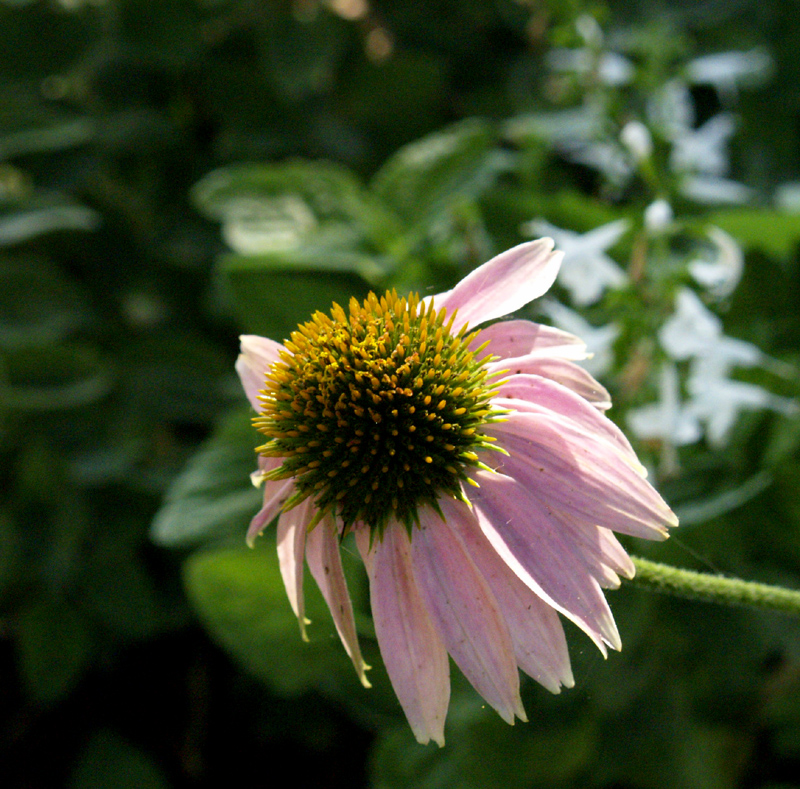 But this year, I wanted to add ‘Coral Nymph’ as well. I added some perennial bicolor salvias (Salvia sinaloensis) in this shady/sunny spot. At the front of the bed, I was going for the perennial pink skullcap. It’s failed there before (not quite enough sun) but I was tempted to try again. Then, at the nursery, I saw white Mexican heather. Cedric cat approves. 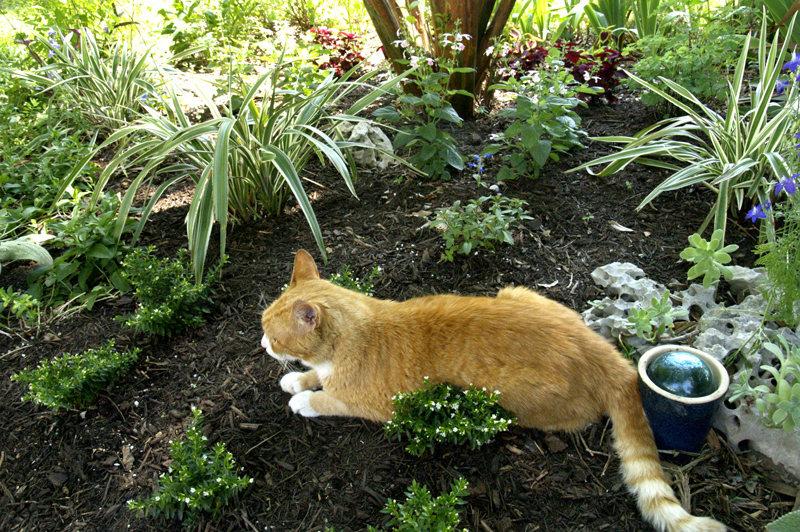 In normal winters, the purple flowered version dies back, but returns in spring. I couldn’t resist trying this white one for the first time. Once it fills in, I think it will be lovely, camped on either side by lambs ears.

Cedric babysits the white narrow-leaf zinnias (Zinnia linearis) that accent other parts of the crape bed and the den bed. 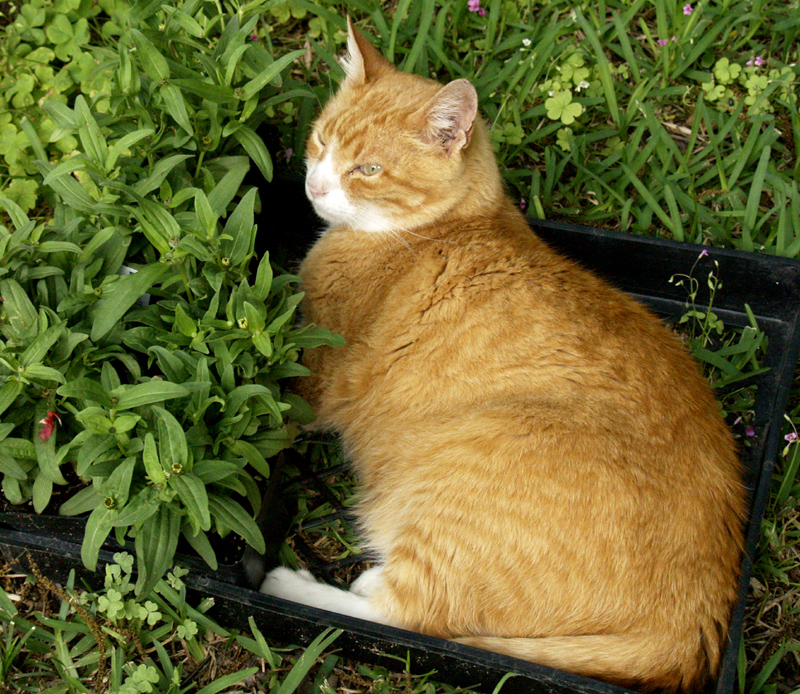 Although the crape bed has a soothing theme, the cat cove is a riot of color with “Senorita Rosalita’ cleome and pavonia/rock rose (Pavonia lasiopetala). 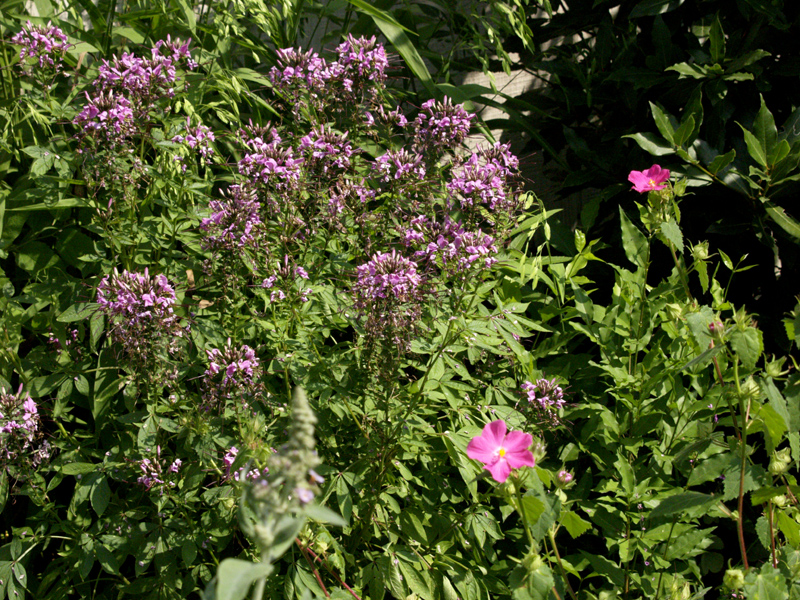 We put up the kiddie pool last weekend, just in time! The birdbath and its solar fountain refresh the wildlife. 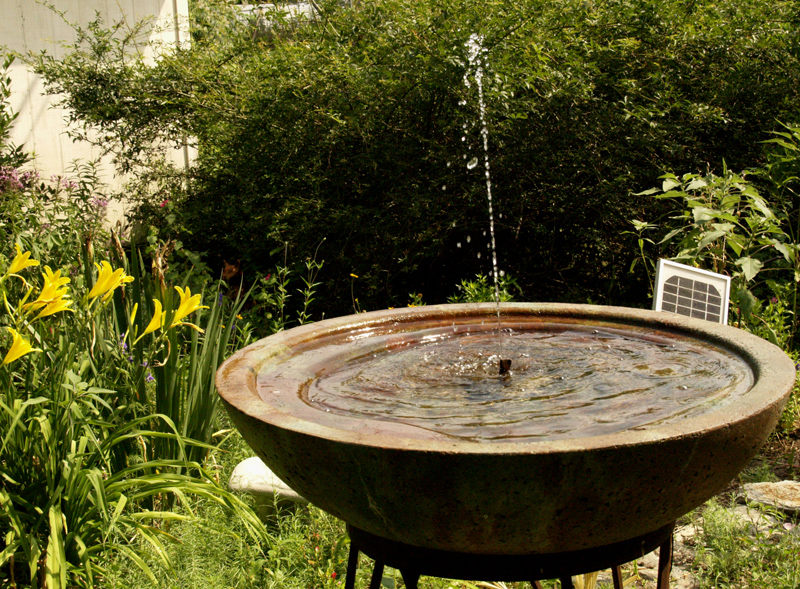 Since water is on our minds, this week on CTG, Tom meets with Terrie & Michael Lumsden to preview the Austin Pond Society tour. This year, they moved it up to beat the heat a little.  So, mark your calendars for June 12 & 13! 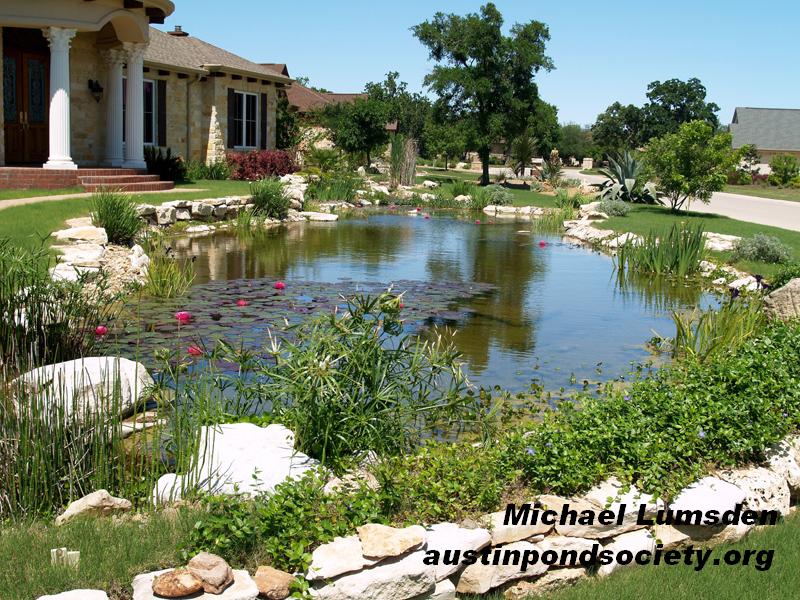 As always, this promises to be a chance to see every kind of water feature, from ponds to fountains, big and small, and meet the gardeners for hands-on advice. 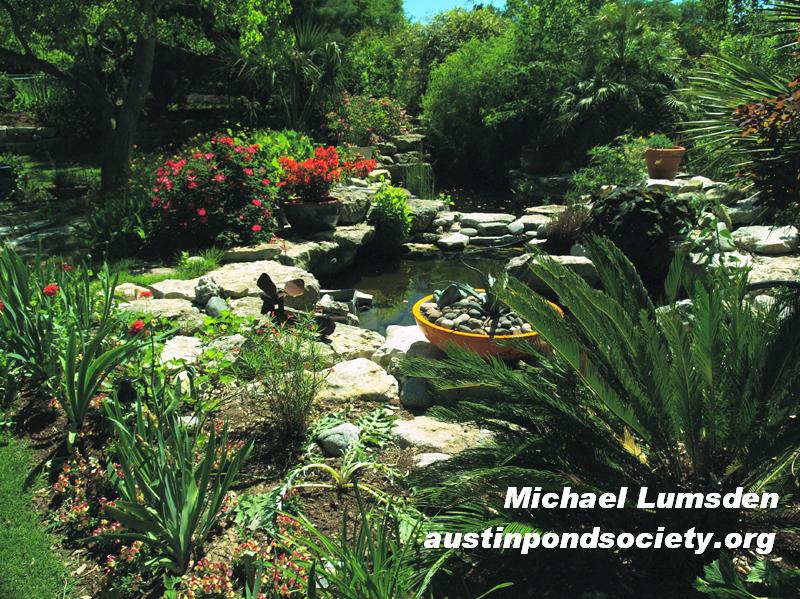 On our video tour, meet Barbara and Greg Clark in Leander. They solved a drainage problem by building a split-level pond and stream in their deer-country front yard. Working with designer Claire Smith of Murffy’s Landscape Design, they achieved year-round color, foliage, and wildlife friends. 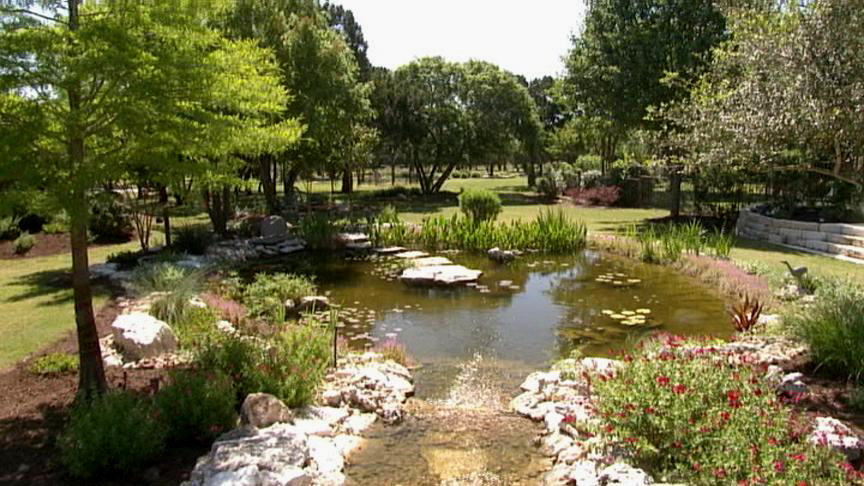 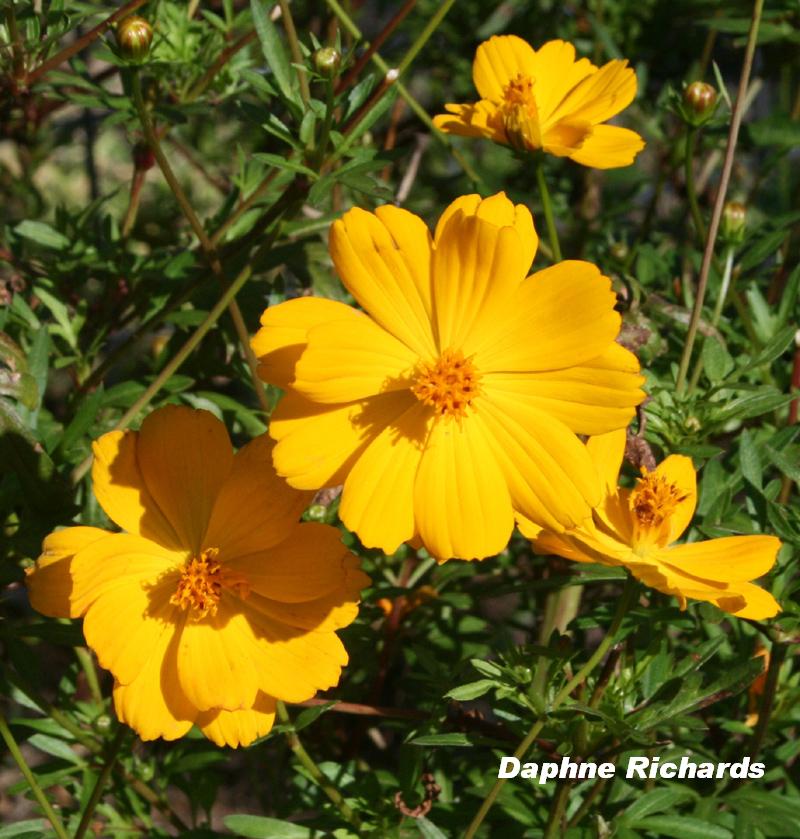 Trisha features purple basils, ornamentals, and Thai basil. She includes dwarf basils, perfect for a container or that tiny spot in your garden. Spicy globe has long been one of my favorites, but now I’ve added Pistou in a little spot at the corner of the den bed.

Boxwood is another new yummy choice for small spaces. Get Trisha’s lists, details and recipes for basil bounty of your own!

Finally, Garden Curmudgeon of the Week:  Wipe out all the “bad bugs” and your life will be tortured by them forever. They will return, but your beneficials may not. Remember, even organic/natural products kill good things, too.  Pick your battles, wisely.  You’ve got lots of friends in the garden, whether you can see them or not.  Respect them.