Thanks to insects, human foragers, experimenters, dreamers, and plants’ own spin on things, our gardens are deeply enriched. My Salvia farinacea ‘Henry Duelberg’, discovered by Greg Grant in a cemetery—and named for the nearby headstone—makes a perfect companion to white Salvia greggii. 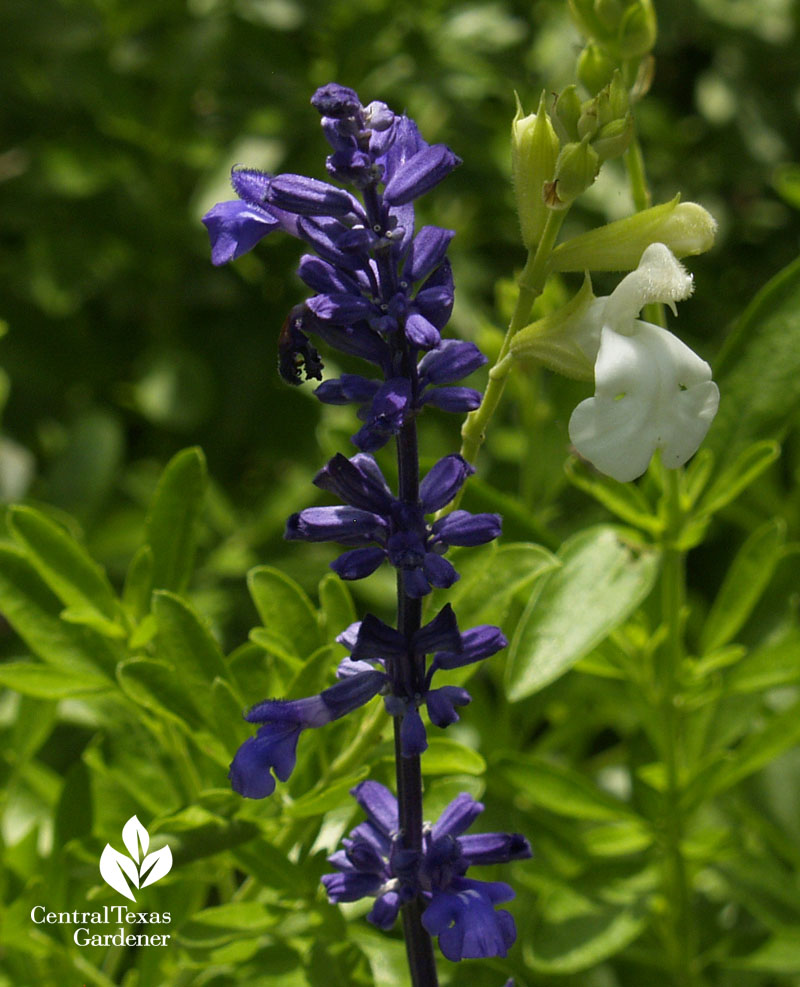 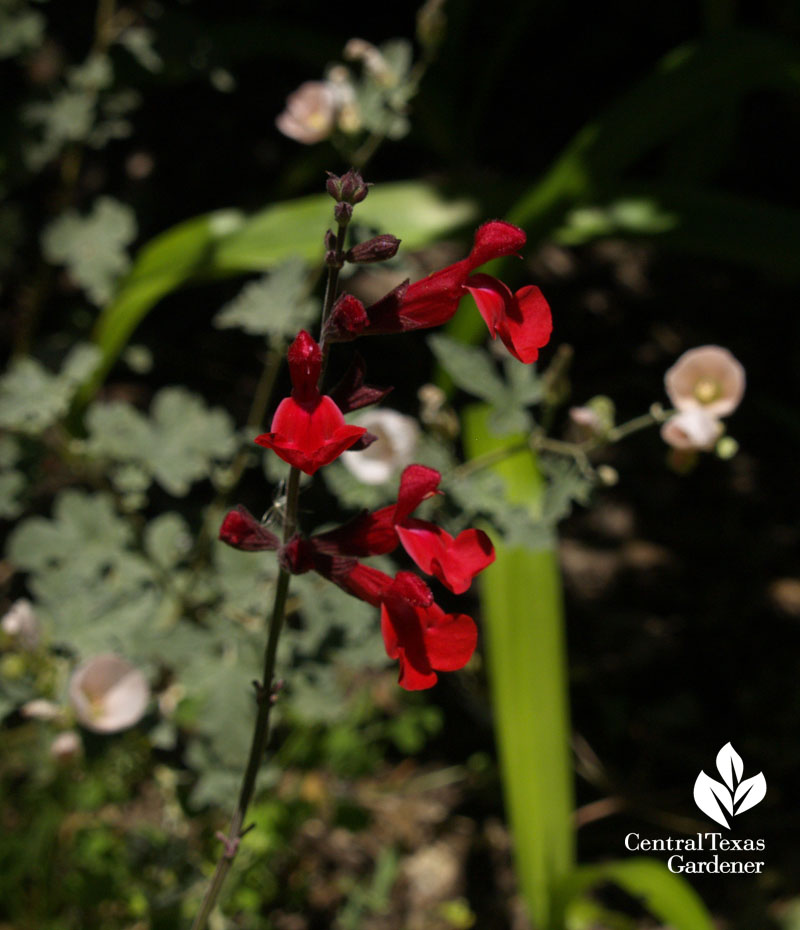 His cuttings wended their way through two horticulturists to end up in nurseries. Beyond, you’ll see my sweet apricot pink globe mallow, which was supposed to be orange. Still, I bought it knowing it could be ANYTHING! Works for me.

I remember when Mexican feathergrass was the new cool plant in Austin (and hard to find). 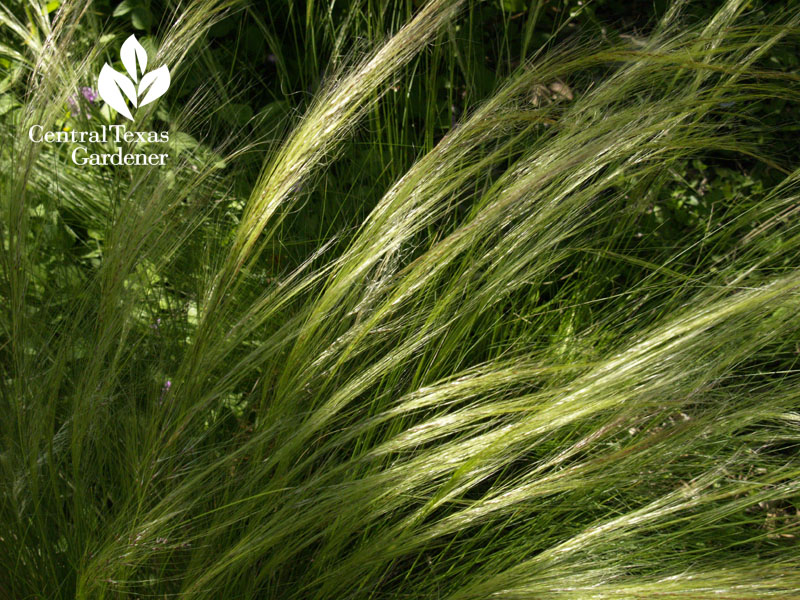 It was called Stipa tenuissima. I’d recite the botanical name over and over because I liked the sound of it. Now, botanists have changed the taxonomy to Nassella tenuissima. Still the same springtime seed heads on feathery leaves, plus a fancy name to roll off the tongue. And now so available.

Pineapple guava (Feijoa sellowiana) is actually not a guava at all, though many love its flowers in spring and ripe fruits in fall. I’ve heard that the sweetest fruit is when you let them actually fall to the ground. 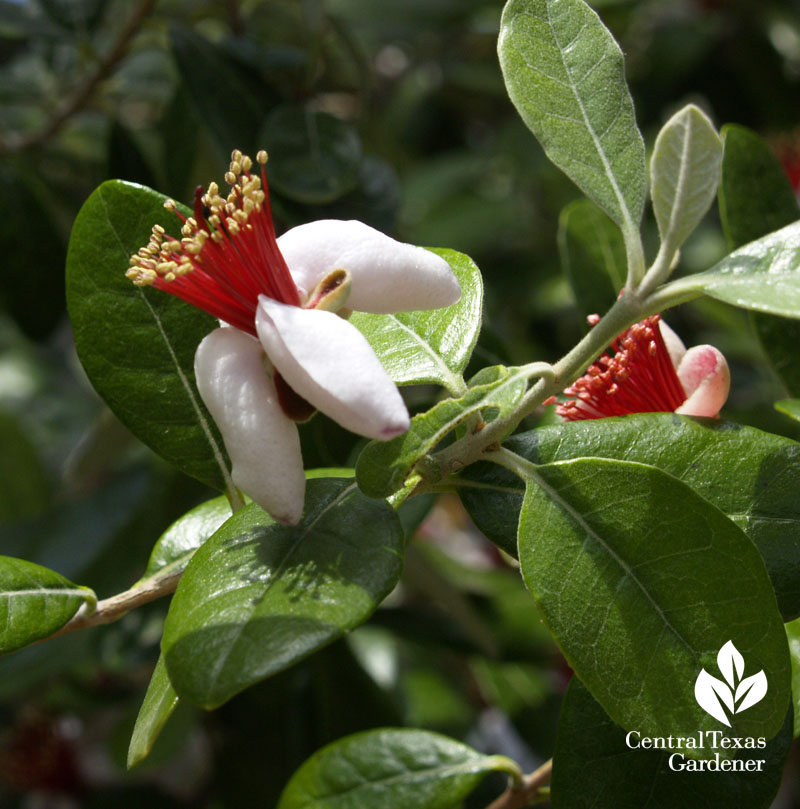 A German botanist named this fruiting small tree/shrub after Don da Silva Feijoa, a botanist in Spain. Its species name acknowledges F. Sellow, a German who collected specimens in the province of Rio Grande do Sul in southern Brazil. Mine hasn’t bloomed yet, though I love the silvery undersides of the leaves in a semi-shaded spot. My friend with this blooming one uses it in a natural screen between her driveway and the neighbor’s. 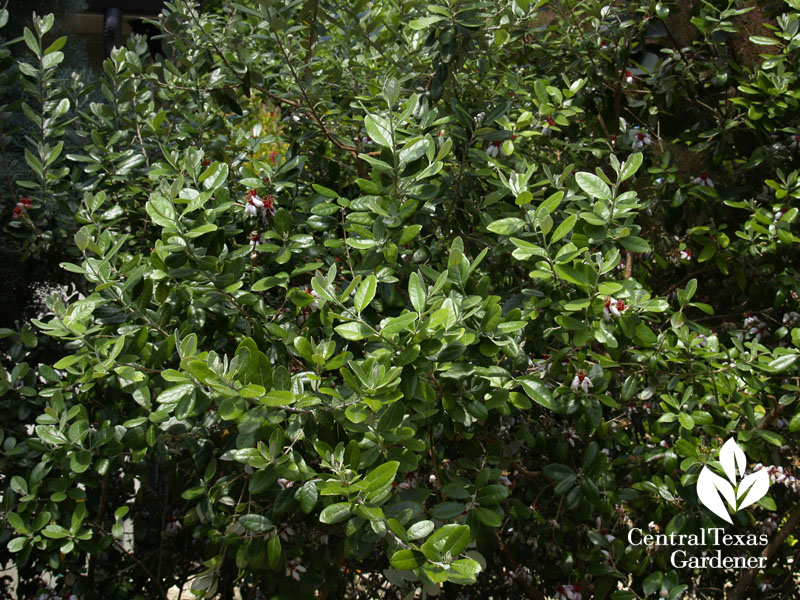 Down her street, this Yucca rostrata sends it flowers to the sky. These days, thanks to tissue culture, there are cultivars like ‘Sapphire Skies’. 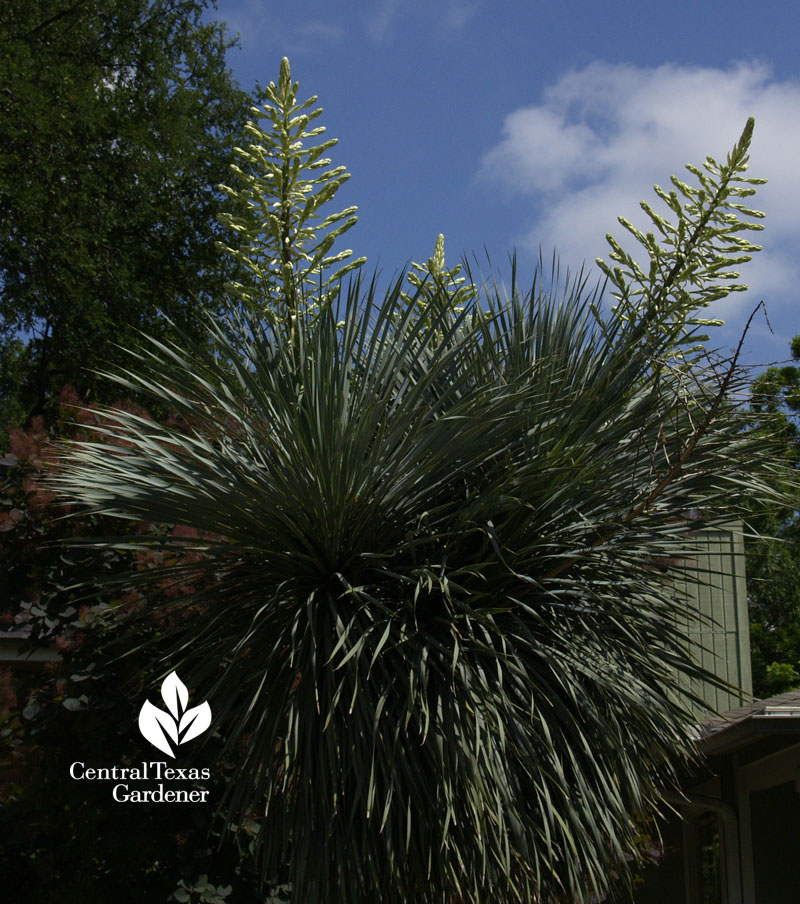 Thanks to enterprising folks, my native Penstemon cobaea, Mediterranean Byzantine gladiolus, and larkspurs made it into nurseries and into my melting pot garden. 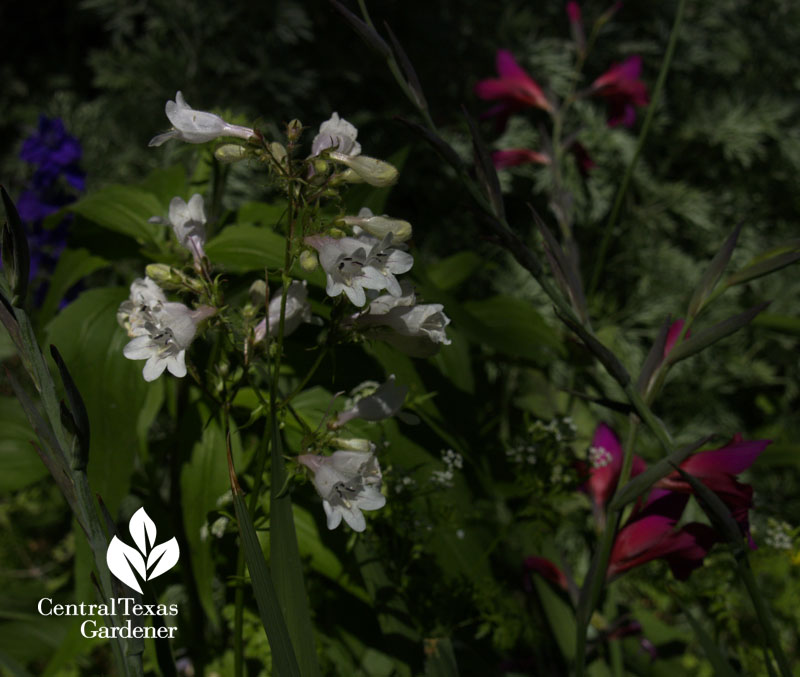 So, how do horticulture and botany intersect? Daphne deciphers it for us this week.

One of the most quintessential explorations was President Thomas Jefferson’s gardens at Monticello. This week, Peter J. Hatch, Retired Director of Gardens and Grounds at Monticello, joins Tom to connect Jefferson’s revolutionary garden and organic practices to our cultivation today. 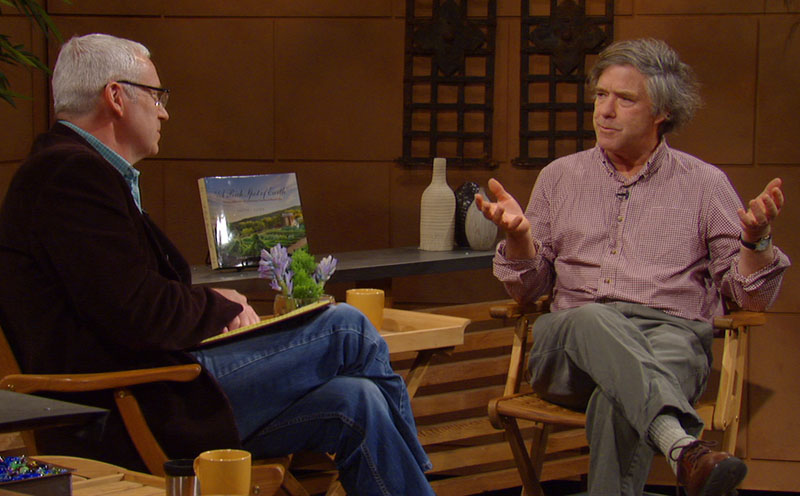 In Peter’s beautifully written and illustrated book, A Rich Spot of Earth, settle down to rich stories of Jefferson’s botanical journeys, detailed diaries, the origins of plants, horticultural tips and recipes from the period. See how Peter restored Jefferson’s vegetable vision and excites us to do the same. 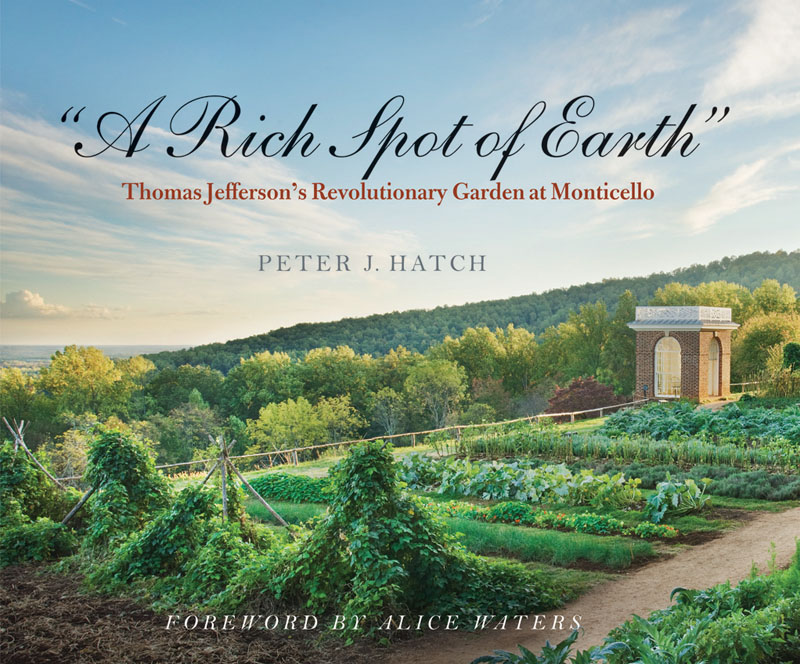 Here’s one of the countless surprises (to me): Jefferson used the leaves of Yucca filamentosa to tie up and stake grapevines. Have you ever thought of that with cultivars like ‘Bright Edge’ or ‘Color Guard’? I’ll have to wait a few years for my passalong ‘Color Guard’! 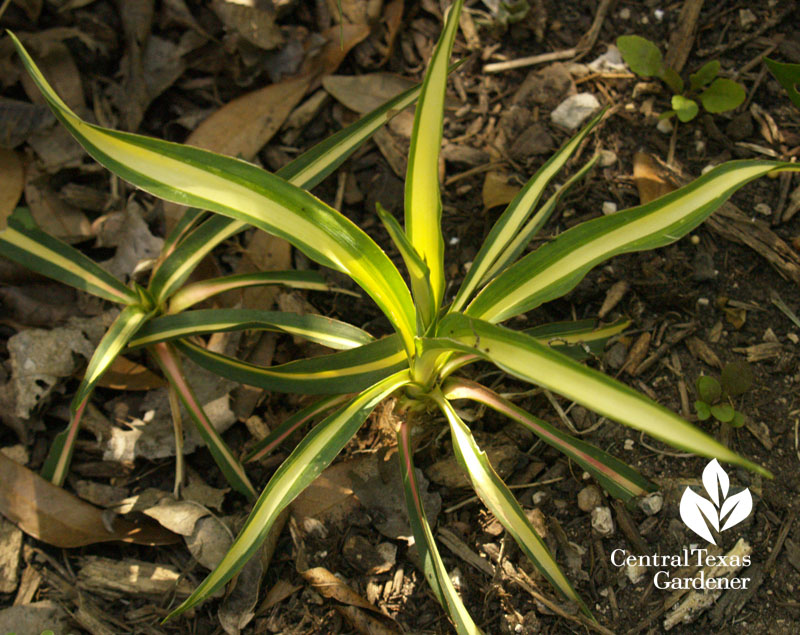 Oh yes, if you can’t get to Monticello, online you can buy historic seeds for food and ornamentals, like Hyacinth bean that I’ve seeded to cover a part of my chain link fence.  And do check out their events, too, for a family trip into history, wonder, and rejuvenation of good, healthy taste. 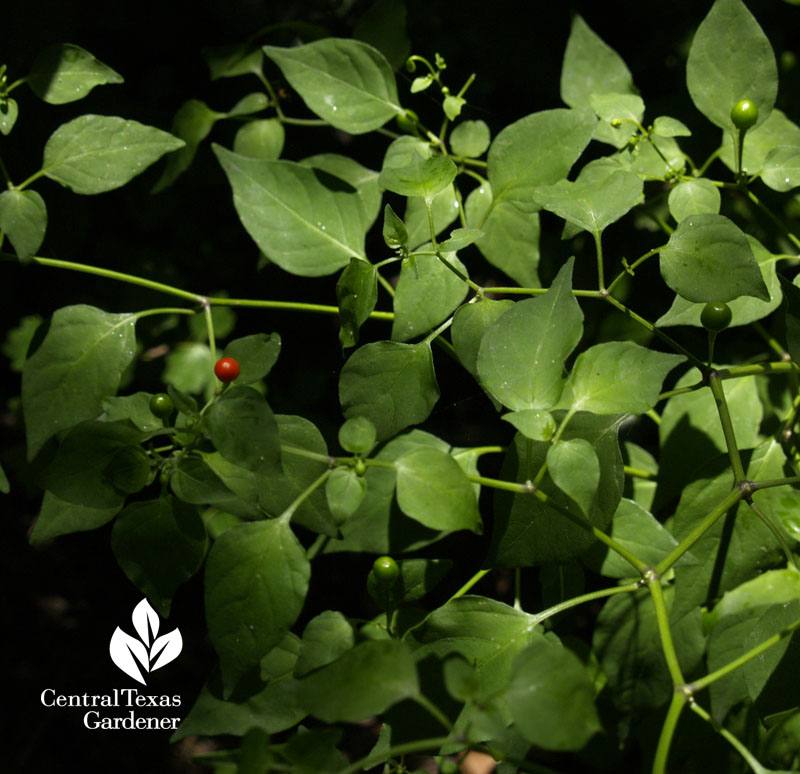 Many sources describe tepin as ovoid and pequin as conical or oblong. However, my plants from local nurseries were labeled “chile pequin,” even though the fruits are rounded, as you can see!

In any case, it’s a true tough Texan, and a wonderful perennial in my semi- shady beds with that psycho blast of sun. It’s totally fun to see where birds seed it.  At Travis Extension, they’re larger and denser in full sun.

If you can nab the fruits before the birds get them, here’s a fabulous salsa recipe from KLRU colleague JJ Weber. 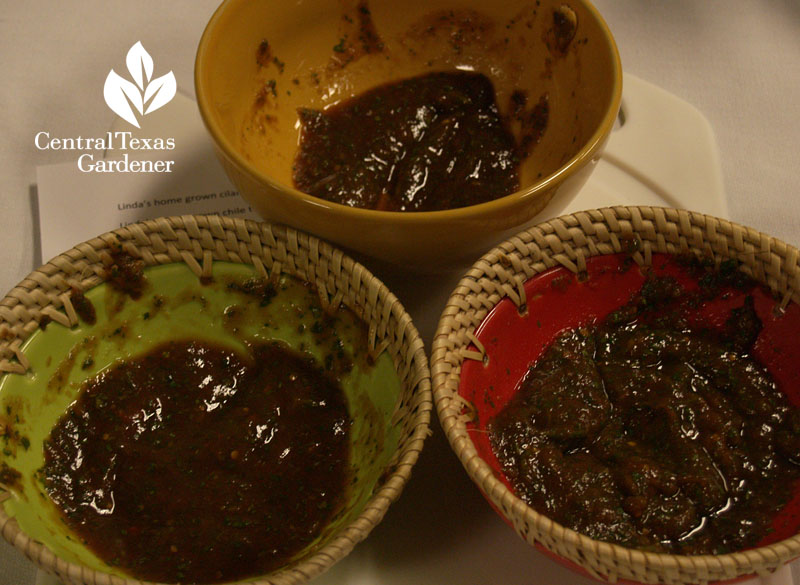 Normally he uses dried tepins, but to celebrate Peter Hatch’s visit, he made three different versions with my fresh chile pequins (tepins?). Whatever, it was gone so fast I almost didn’t get a picture!

Thanks to explorers and nurseries, in recent years gardeners have added specimens and cultivars of cacti and agaves. Since tending them without an “ouch” is new for many of us, Jeff Pavlat from the Austin & Cactus Succulent Society demonstrates his spiky/spiny plant toolkit! 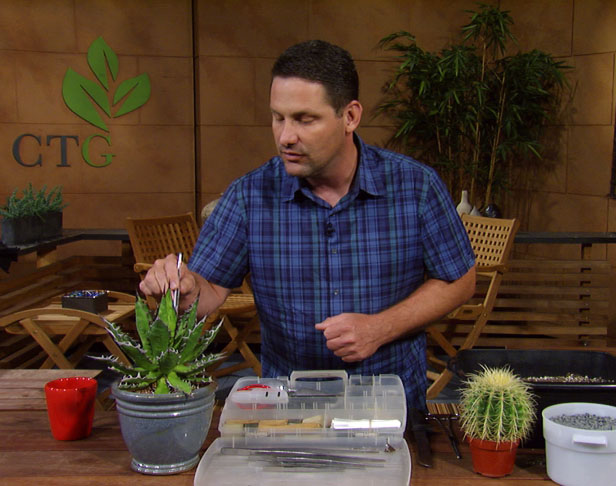 On tour, we repeat our visit to Peckerwood Garden, where botanical explorer John G. Fairey introduced many of the plants that have made it our own explorations. This weekend, May 11 & 12, is Peckerwood’s last general public open days until fall, so head on out if you can!

Viewer picture of the week: an update from Susan Brock. The cardinal eggs in a hanging basket in her NWF certified Backyard Habitat have hatched! What a wonderful discovery! 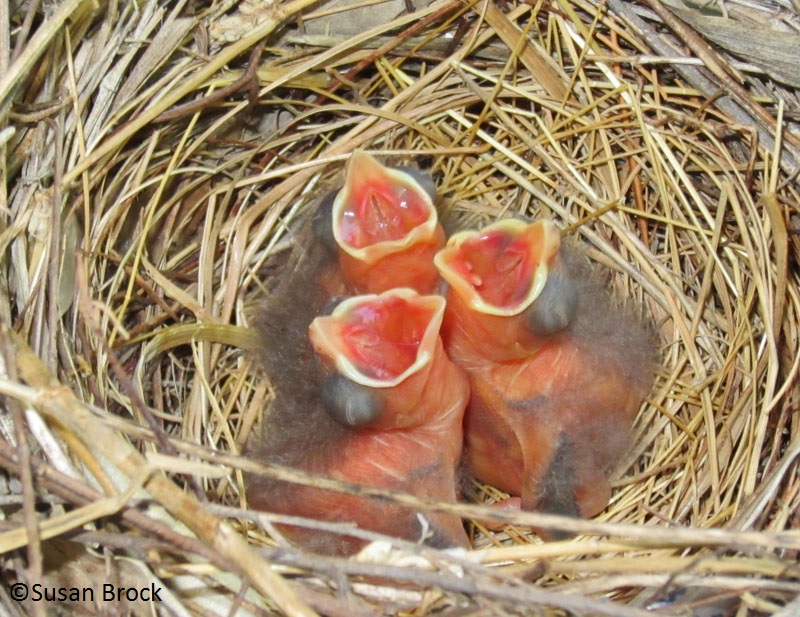 Thanks for stopping by. Until next week, happy explorations! Linda

← Spring into summer with gusto
Superstars, outside and for your Indoor Plant Decor →