Just when you think you’ve got “things” figured out (whatever they are), some “thing” tests your composure or topples your good day tower. No matter what, though, my winter bulbs don’t disappoint. When January rains threatened my pass-a-long paperwhite narcissus, I cut a few to adorn my still-working-from-home kitchen table office. Plenty more showed up to last for weeks. 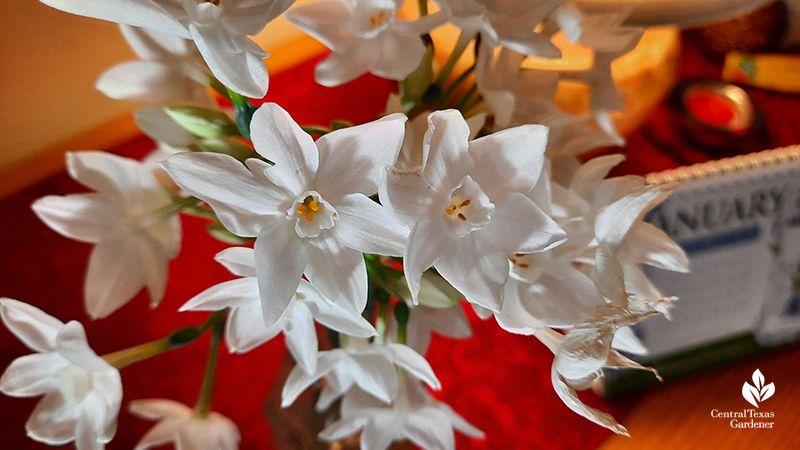 Now, after days of balmy complacency when perennials and fruit trees leafed and budded, we head into the coldest temperatures in years. Yikes, 7 degrees possible! So, I cut a few recently opened Narcissus ‘Grand Primo’ and ‘Erlicheer’ for the February office. This weekend, I’ll cut more for our homegrown Valentine’s bouquet! 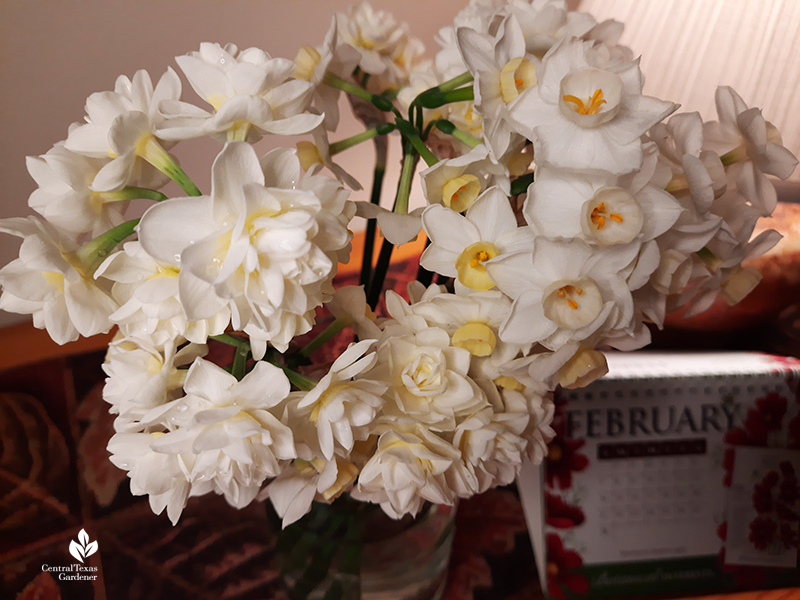 But it was diminutive Algerian iris, another pass-a-long tucked under a yaupon holly, that took late January into mid-February. 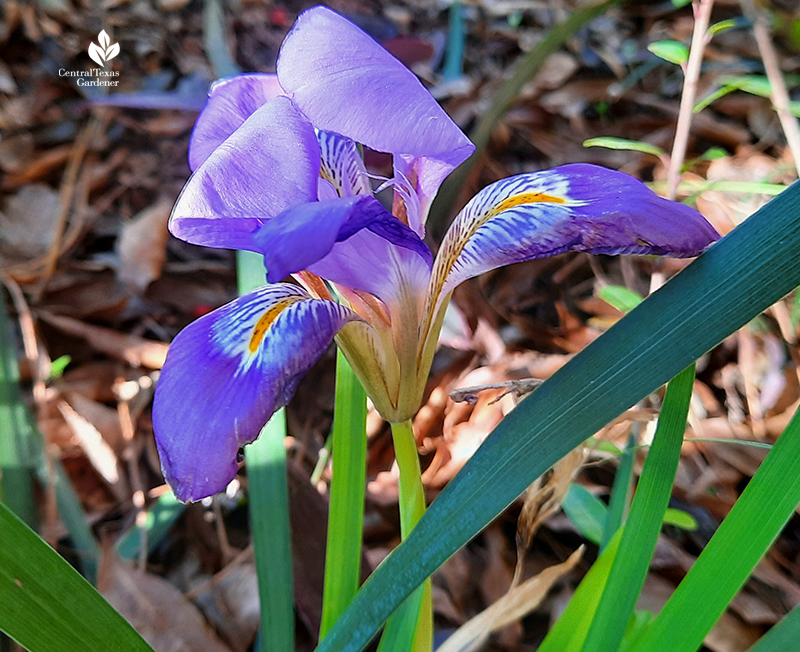 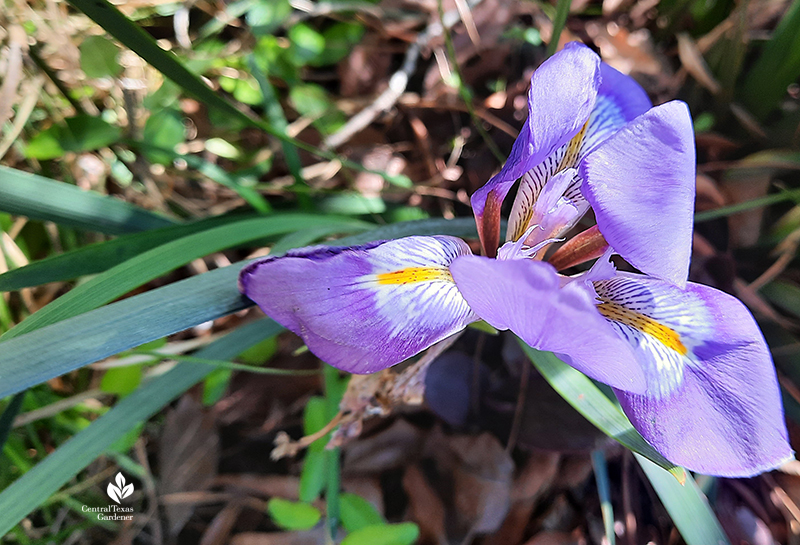 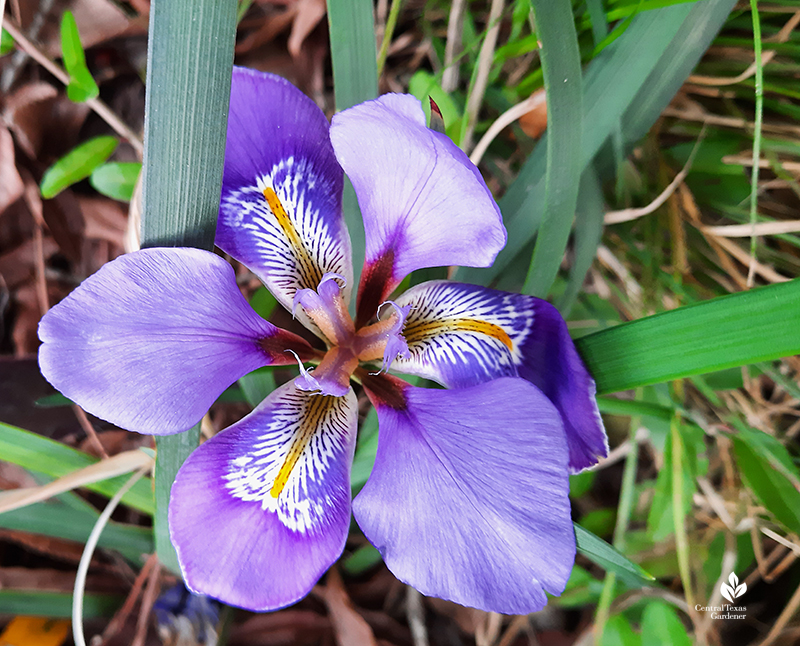 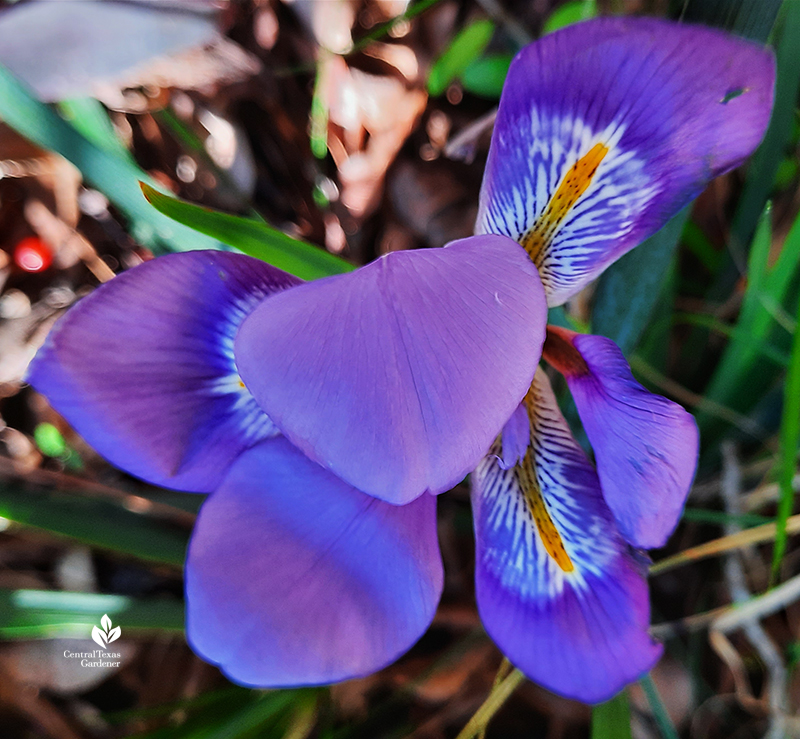 This Mediterranean native doesn’t mind some shade, supposedly even under live oak trees, where it spreads via rhizomes. 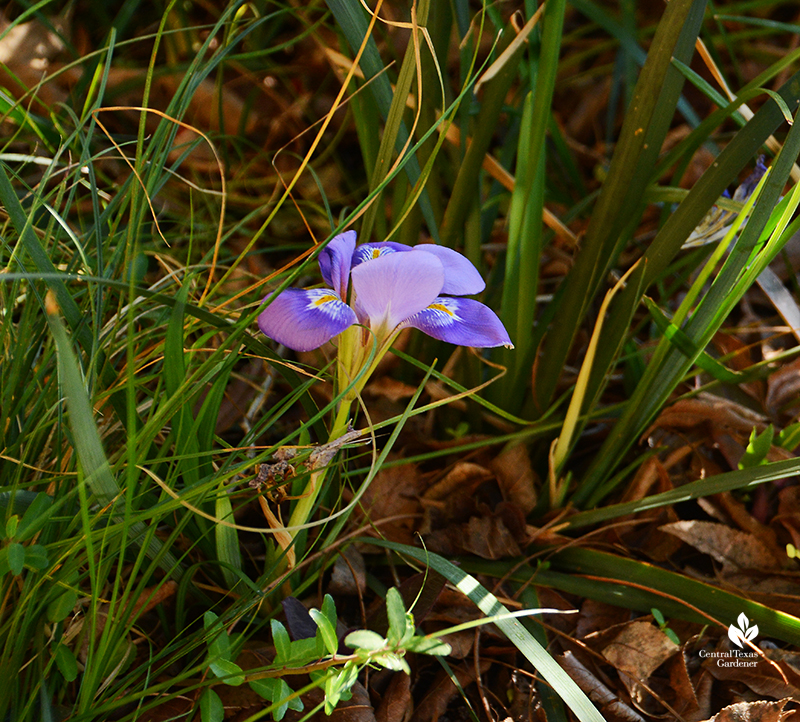 Most winter bloomers want sun at least part of the day once foliage emerges. It’s okay to plant under deciduous trees that drop their leaves in fall, since the bulbs are tucked underground during shaded summer months. 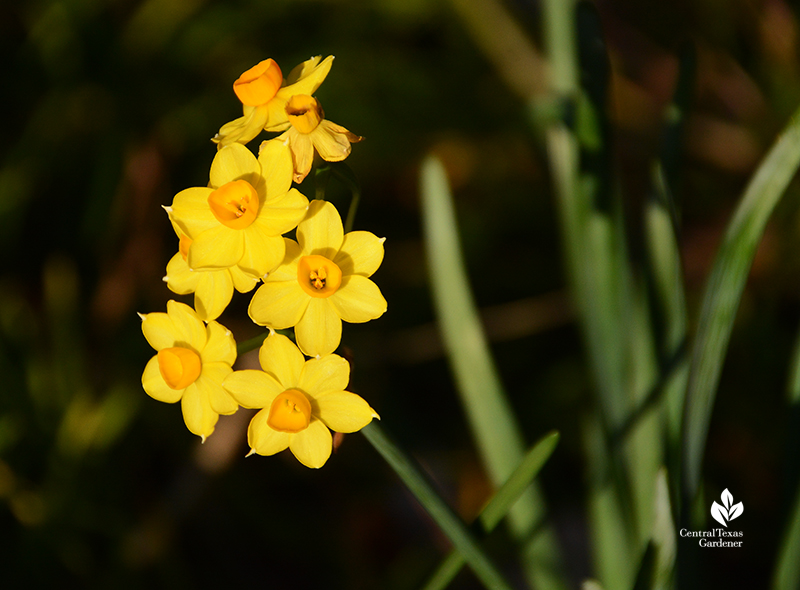 The weather and your garden’s microclimate impact bloom time. One clump of Narcissus tazetta ‘Falconet’ bloomed early for me on January 26 in a warm spot near the house. 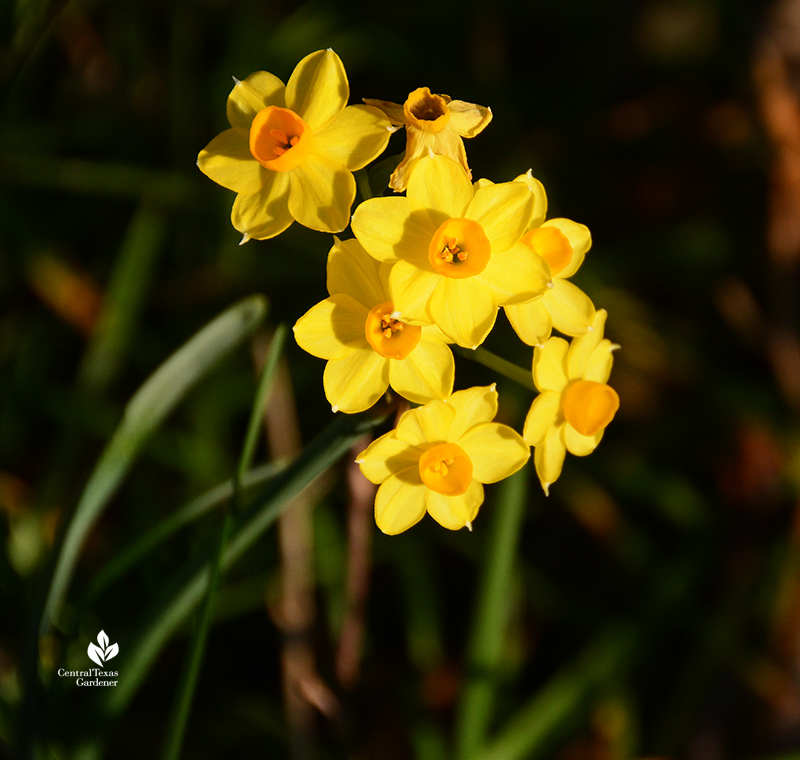 Nature must have seeded it from long-term residents in an island bed several feet away. Although they’re up, they don’t bloom until late February and even into March. 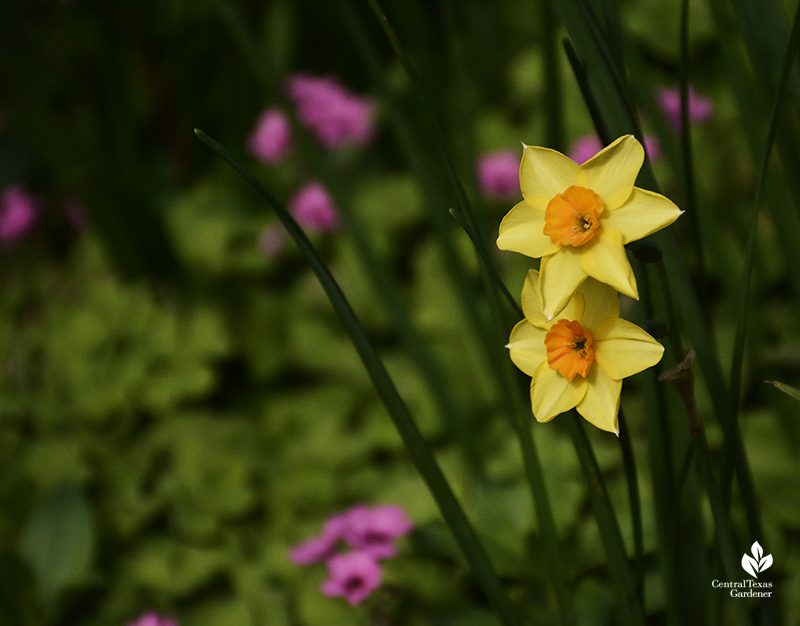 Here’s a shot from March 13, 2015. A few weeks later, dormant (and cut back) perennials filled that space again. Before then, those deep green strappy leaves claimed attention while warm weather perennials took a break. 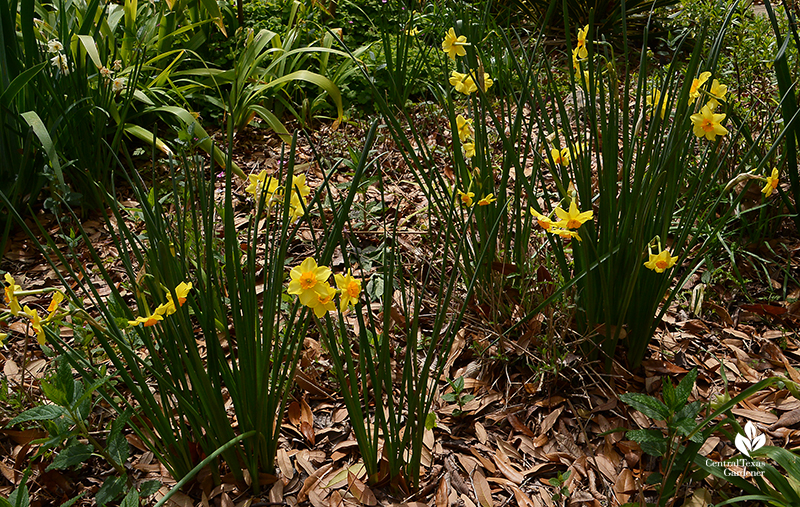 The tazetta species performs well for us, returning year after year. 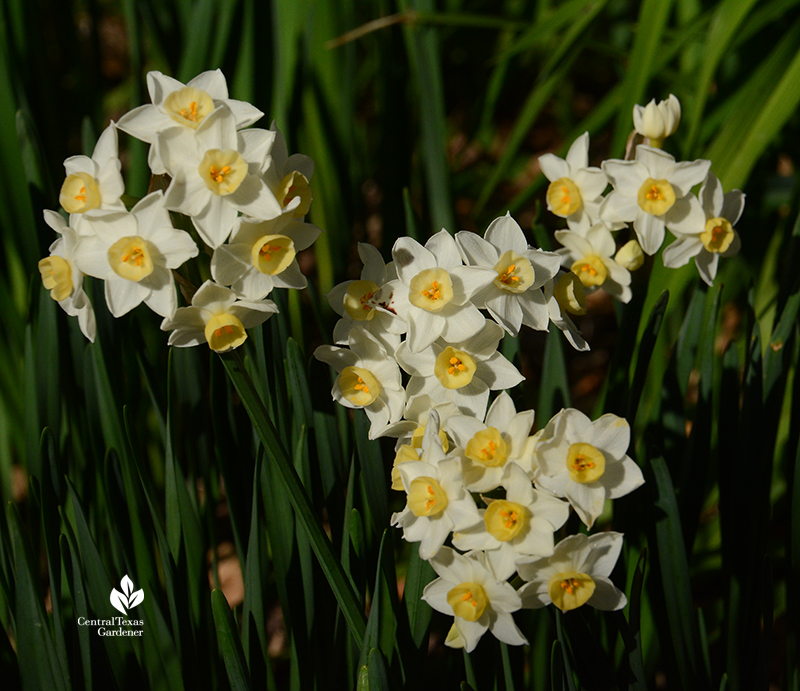 I hear from gardeners whose bulbs don’t bloom. It could be that they are “one and done” varieties not best for Central Texas. In subsequent years, they may produce foliage before disappearing altogether. 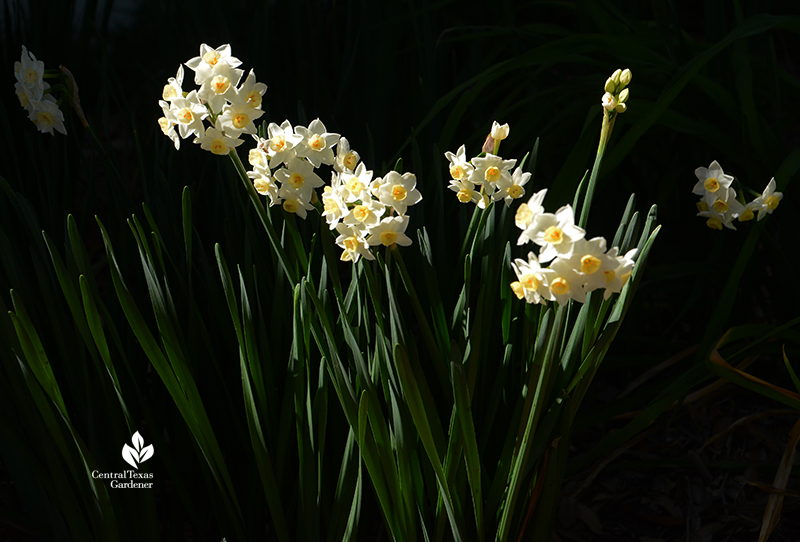 These bulbs are deer and rabbit resistant. They like our dry summers. And again, they make foliar placeholders when warm weather perennials are dormant. 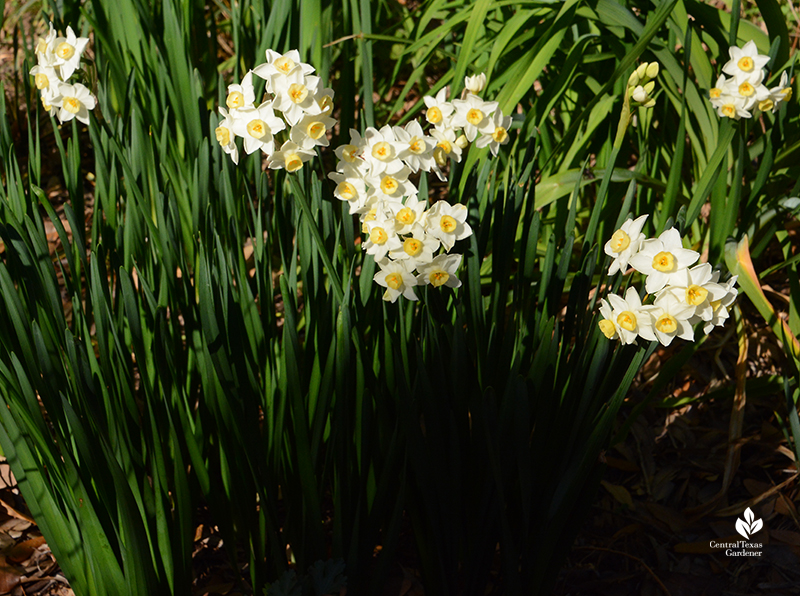 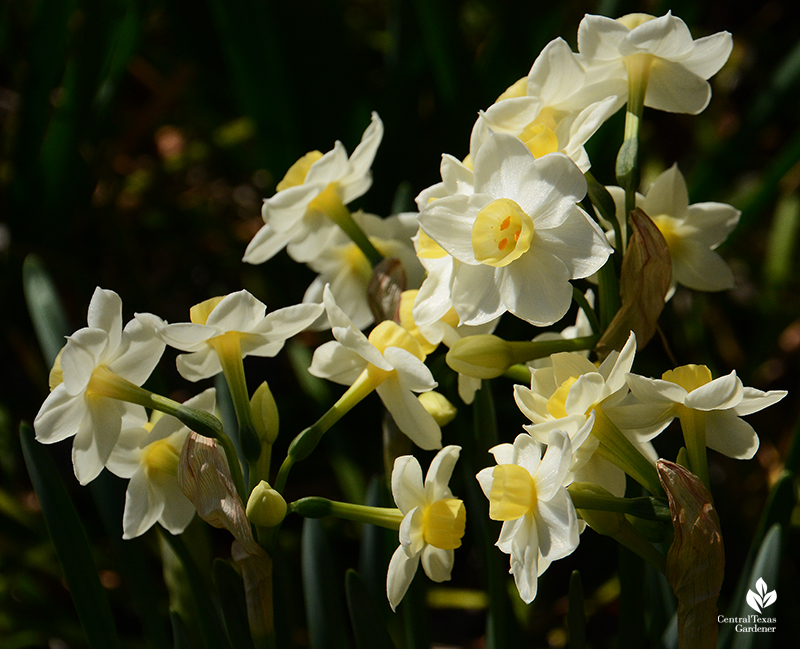 You can divide them when the foliage browns to create swoon-worthy swaths or to pass along to friends and future generations. 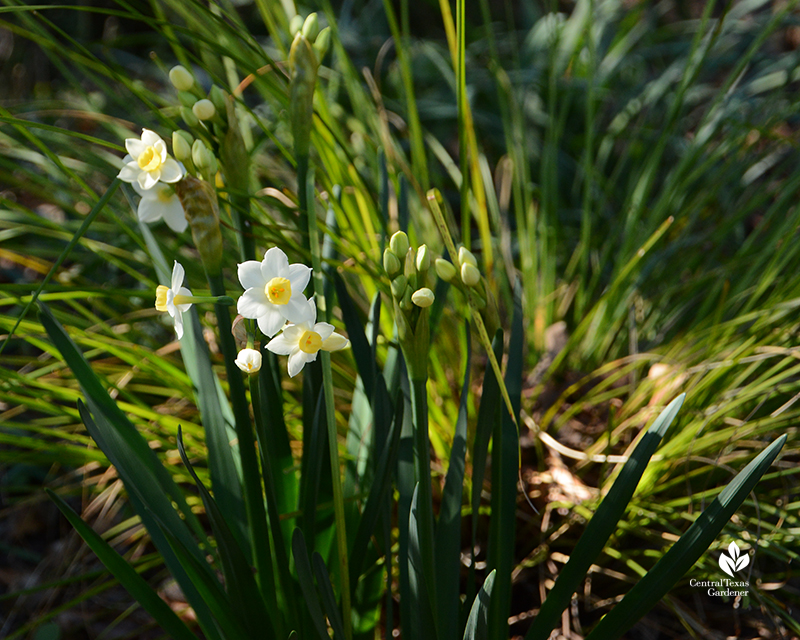 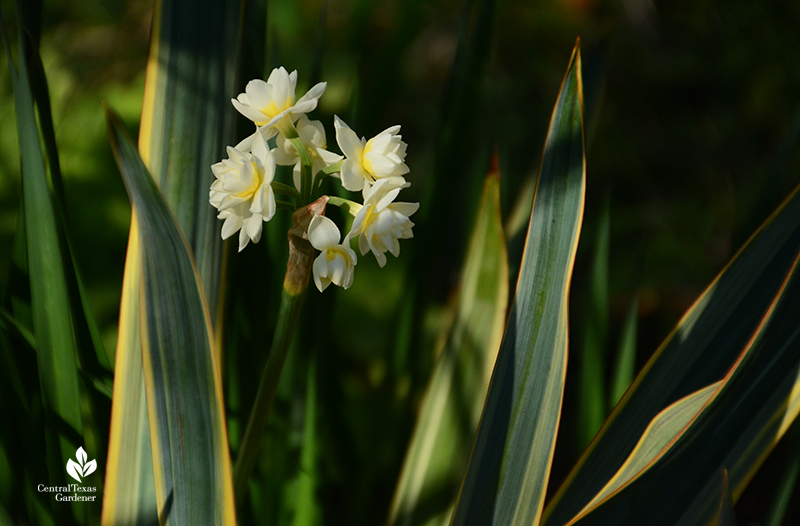 They don’t need fertilizer or chilling in a jam-packed refrigerator. 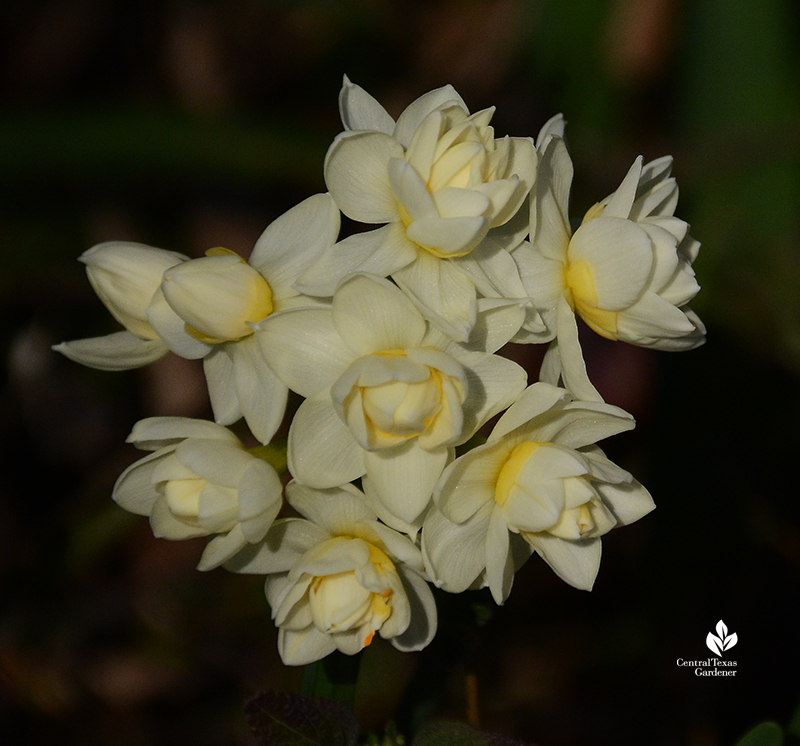 Bloom times also depend on variety, so USUALLY I’ve got more surprises coming up. 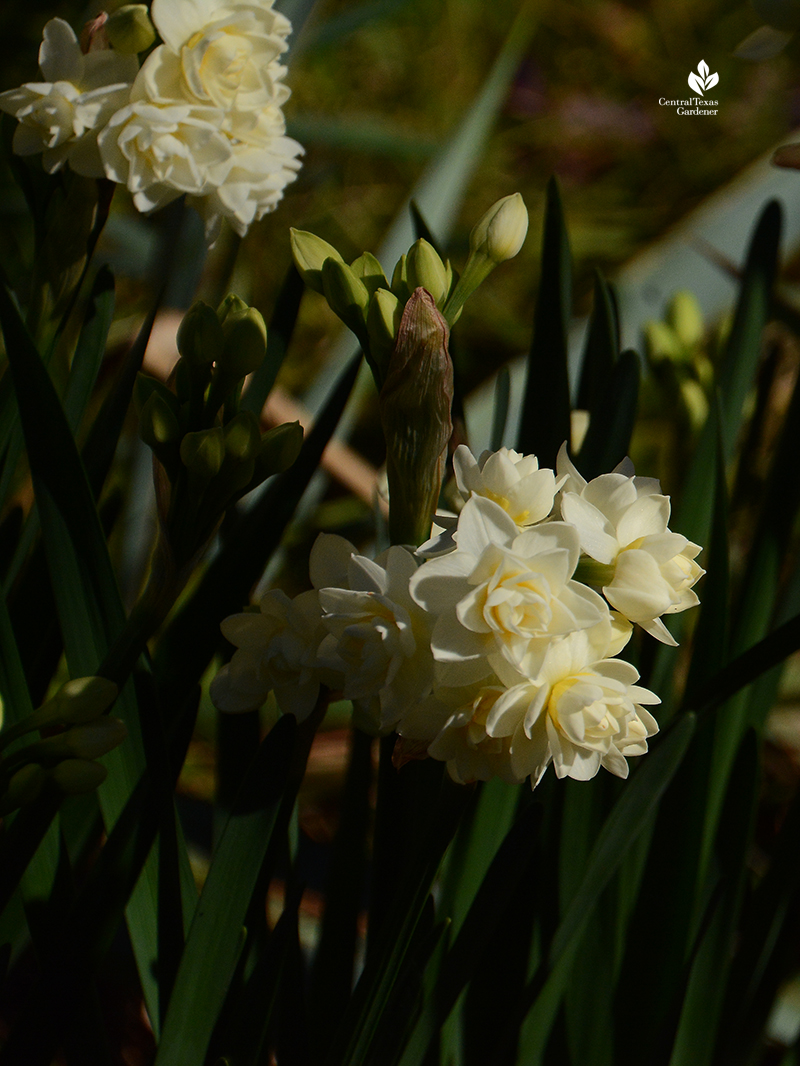 Since this winter’s about to throw us an extended hard freeze whopper, I’m glad I got to enjoy fluffy little ‘Abba’ this week. 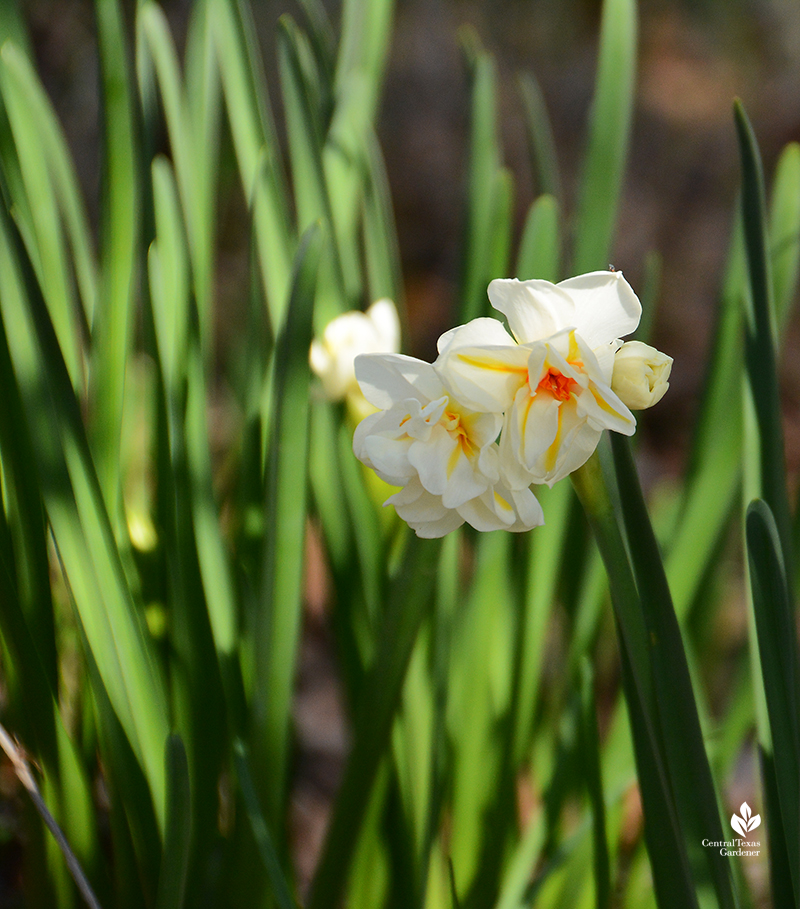 And a moonlit walk around the garden. . . 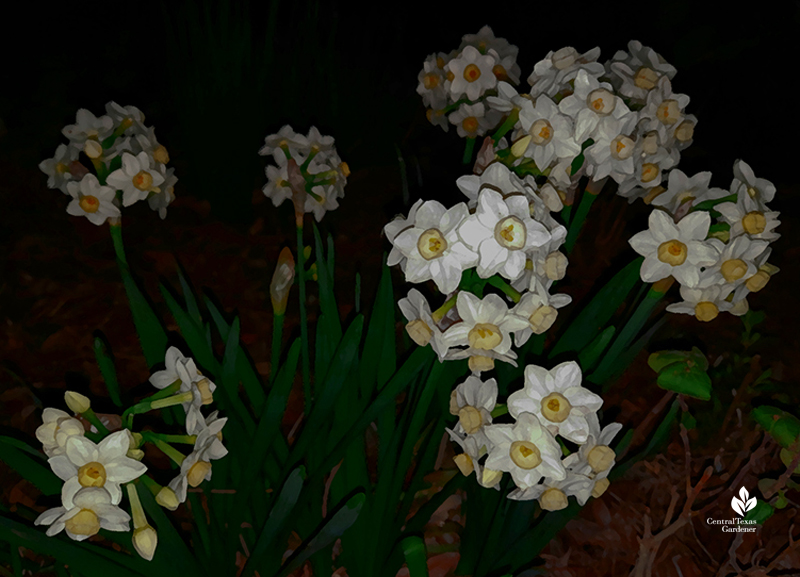 Anyway, we’ll see what happens. ‘Erlicheer’ rallied after 2010’s snowfall with a return performance every year. 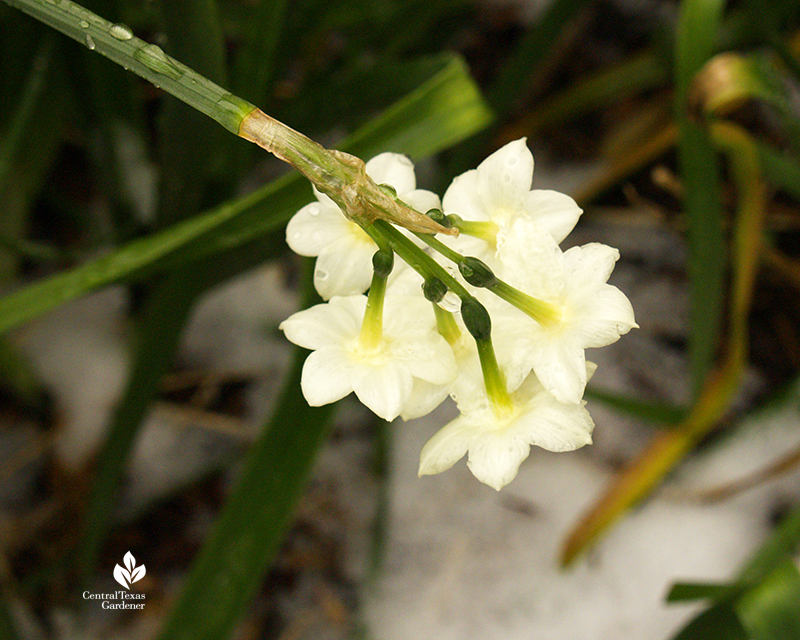 Learn more about bulbs for all seasons! 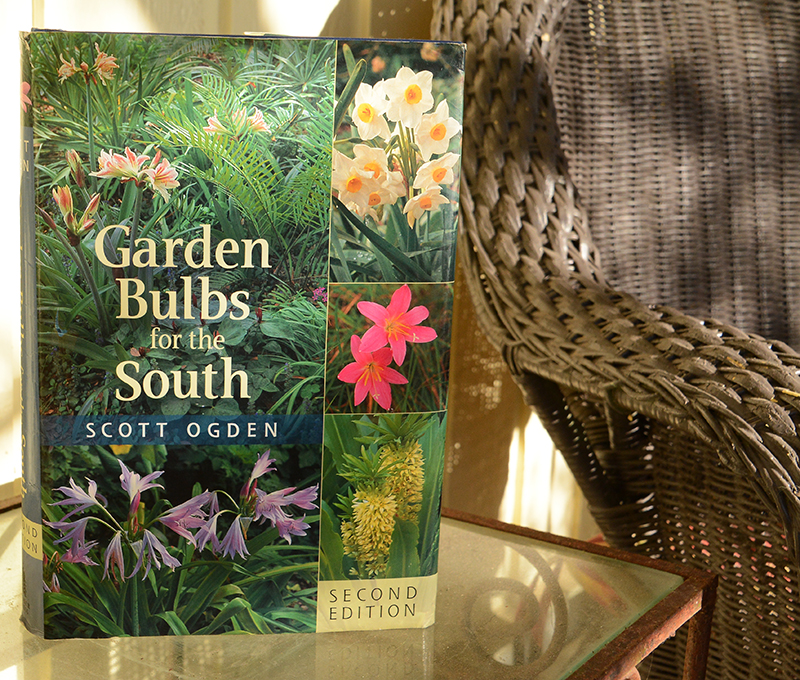 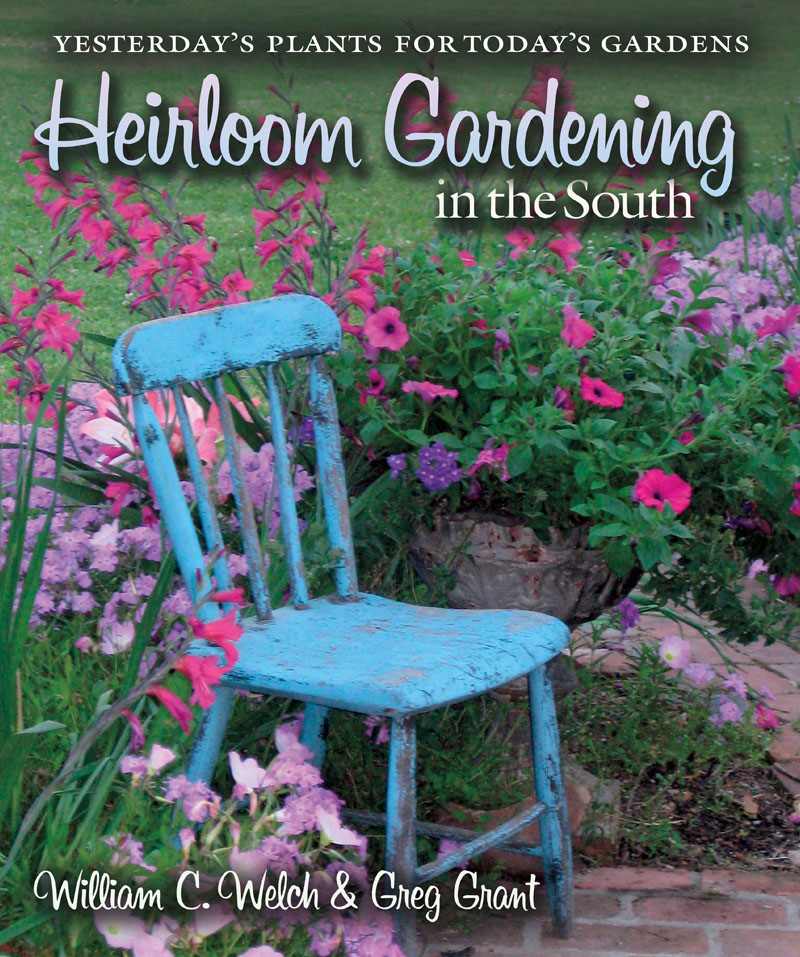 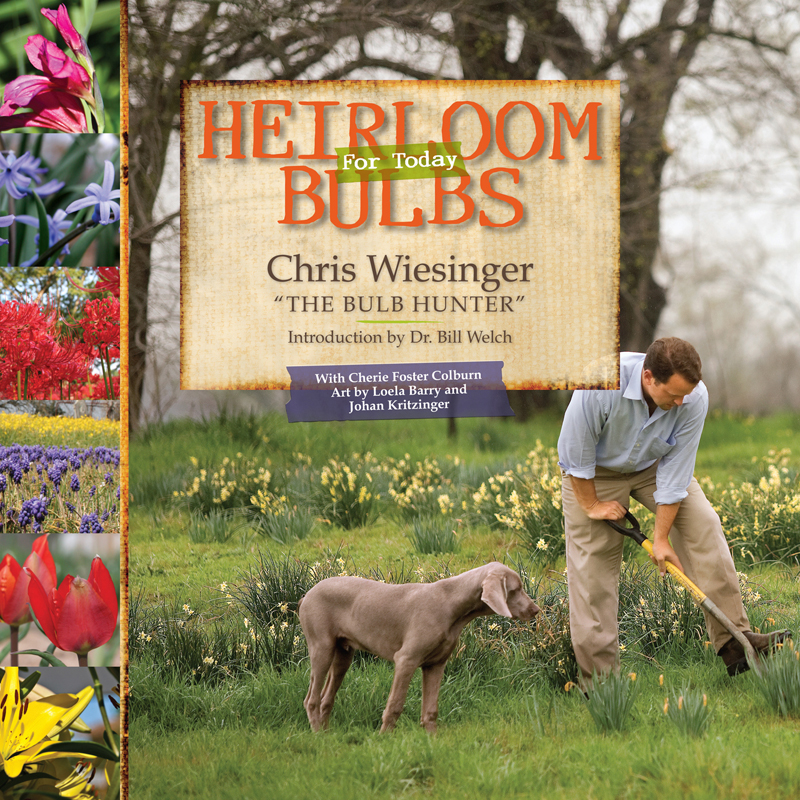 Straight out of A&M, Chris started The Southern Bulb Company where you can order tried-and-true heirloom bulbs online.

See you on the other side of the freeze! Thanks for stopping by, Linda