In this season of wonder, let’s all step outside to see what’s glowing on right under our noses! You won’t find these pea-sized jewels under the tree, and you might need to turn an old leaf to see them. This charming miniature platter caught the observant eye of CTG director Ed Fuentes. 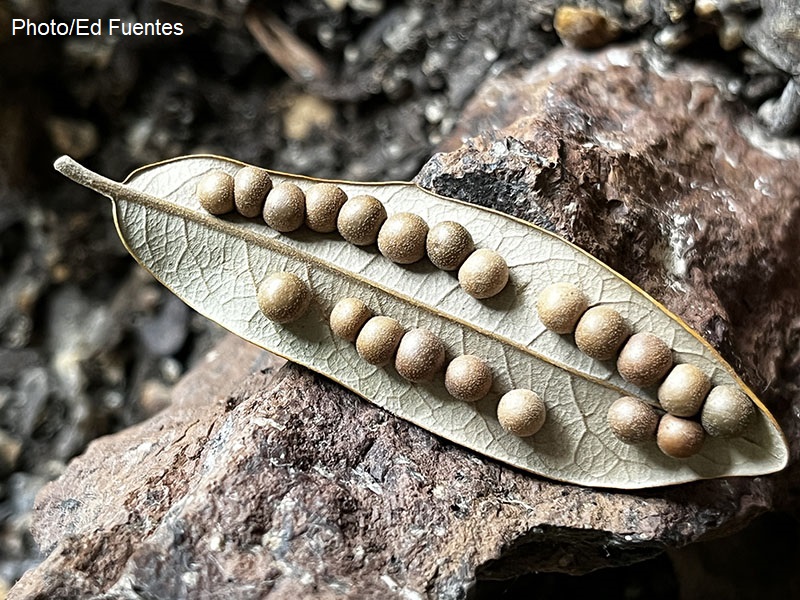 These are oak leaf galls and no reason for alarm. Instead, let’s admire them for the habitat we’ve created in our gardens. “The structure of the gall is an outgrowth of plant tissue, induced by a tiny insect when it lays its eggs, to protect the growing larvae inside. Once the larvae mature, they’ll emerge and fly away, leaving the tree to carry on and recover just fine,” Daphne tells us.

Sarmita Chatterjee captured another artistic sampling in this dreamy photograph. 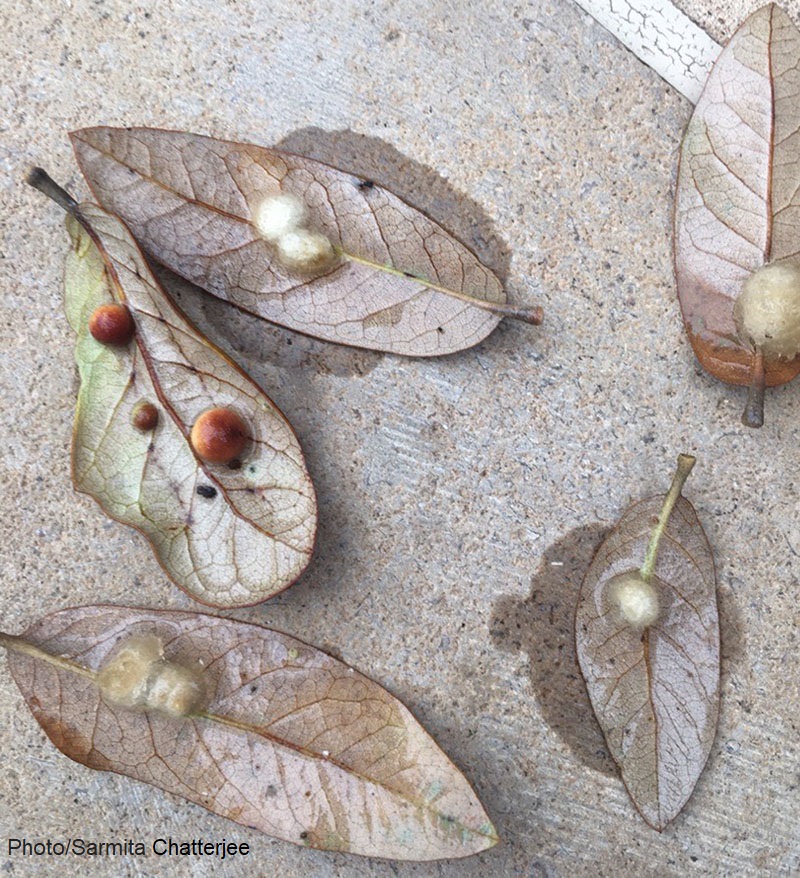 Depending on the plant and insect, we can find galls on leaves, twigs, or branches. Since most won’t harm our trees, let’s marvel at nature’s intricacies! Don’t these miniature orange balls on Danielle Deuillet’s tree remind you of necklace beads? 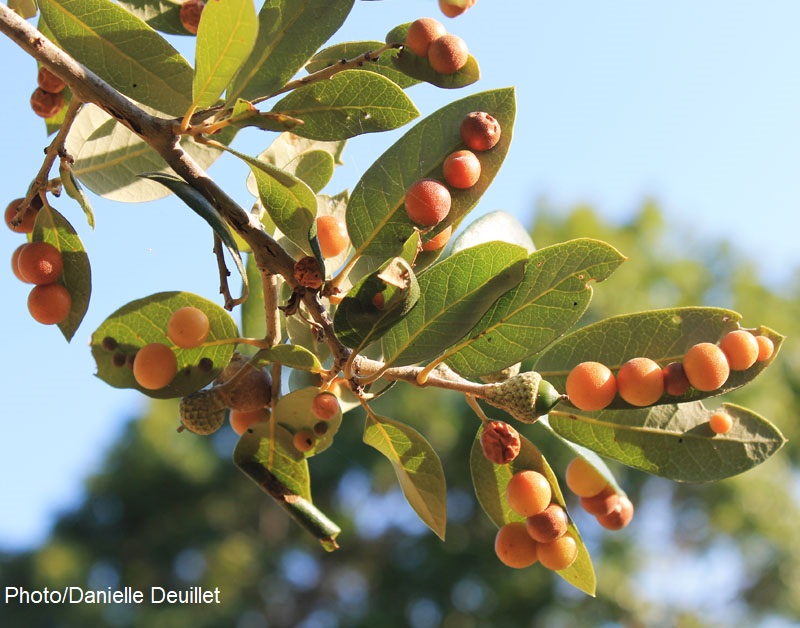 I lucked into these cute fuzzy pompoms on my live oak tree one year. And yes, no surprise that these are called woolly oak gall wasps. These non-stinging wasps are so tiny that you’ll probably never see them when they emerge, but birds may snack on them. 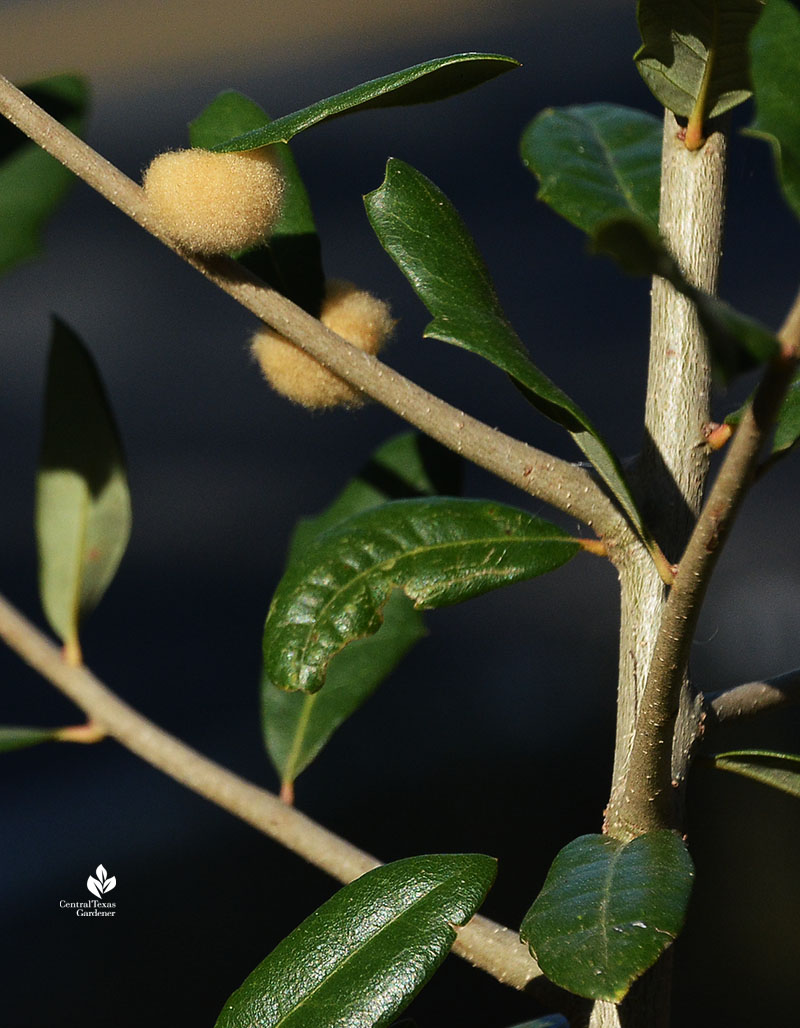 The adult wasps will likely return, but not each year, or even every other year, necessarily. Like many insects, they have cyclical growth patterns, with some years have a higher population than others. There’s no need to treat galls, but even if you did, the insect’s “nursery” provides pretty solid protection to the larvae growing inside, so insecticides have no effect.

What an intriguing cluster Ron Langsweirdt spotted on his live oak tree! 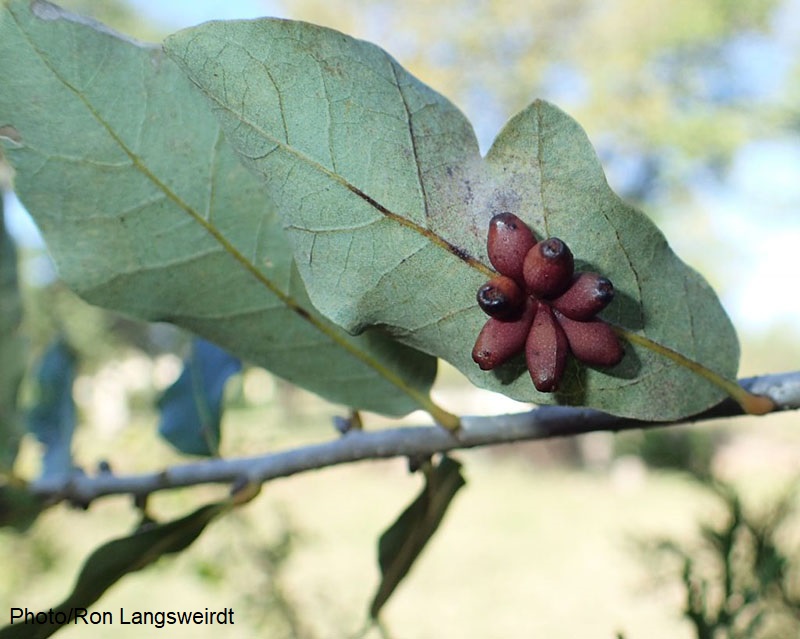 A few years ago, Emily Joyce Bolf and Jeremy Bolf noticed these fascinating 2” growths on their young red oak. You can see why this one’s called the oak apple gall wasp, though it’s much smaller than an apple! These wasps are a two-generational breeding insect: the first generation lives in the roots, then the larva forms these pods to protect themselves. 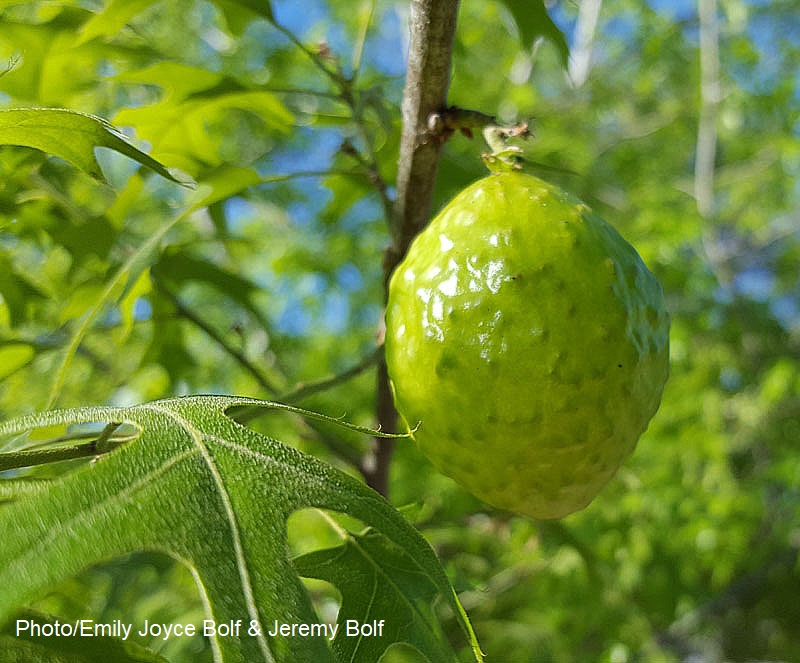 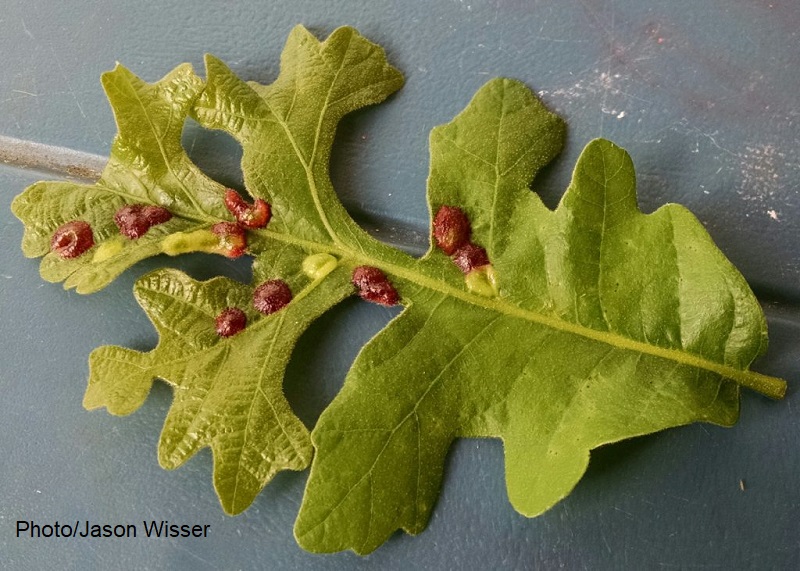 Daphne notes: “Although all of these structures look different, and in fact, they are different, horticulturists lump them into one category as “leaf galls” and name them according to the symptom they share in common, not the exact organism that causes them.” 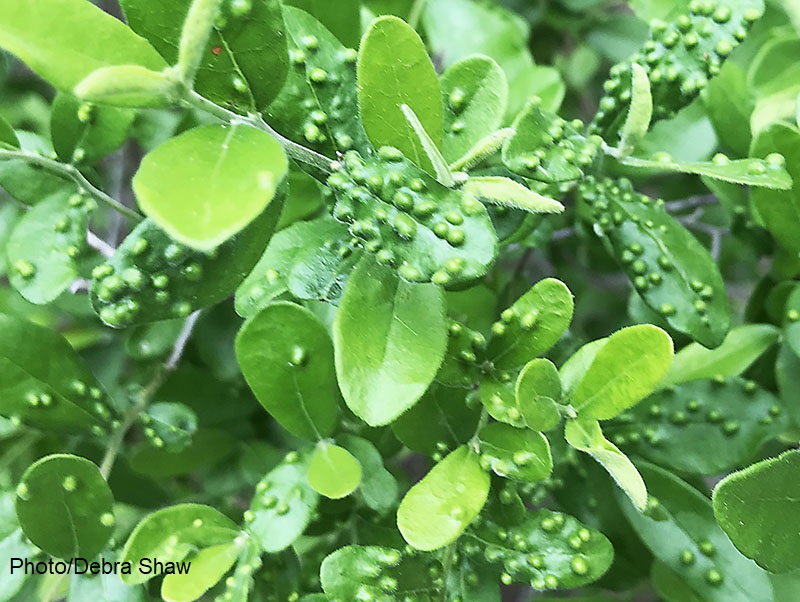 Eric Segerstrom discovered fuzzy ones on his young cedar elm. 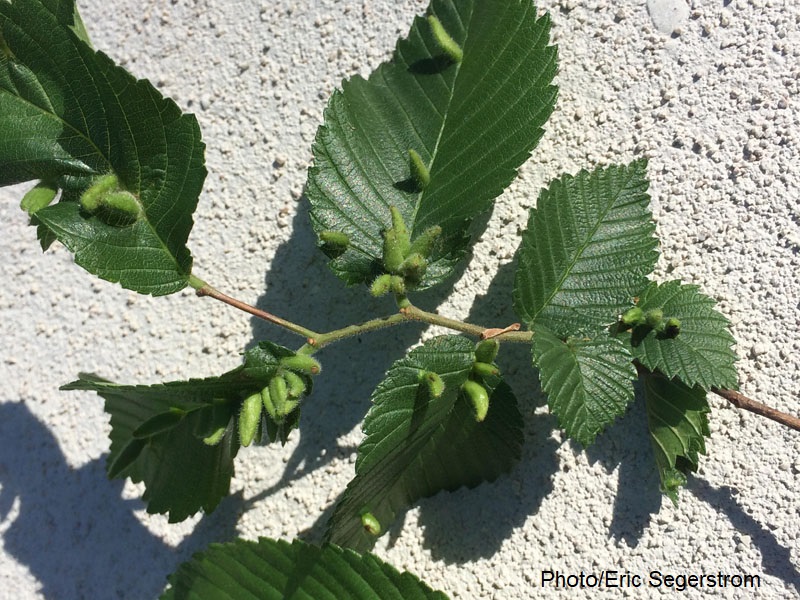 And in Northwest San Antonio, Jessica Keltz spotted a plump one on her two-year-old pecan tree. 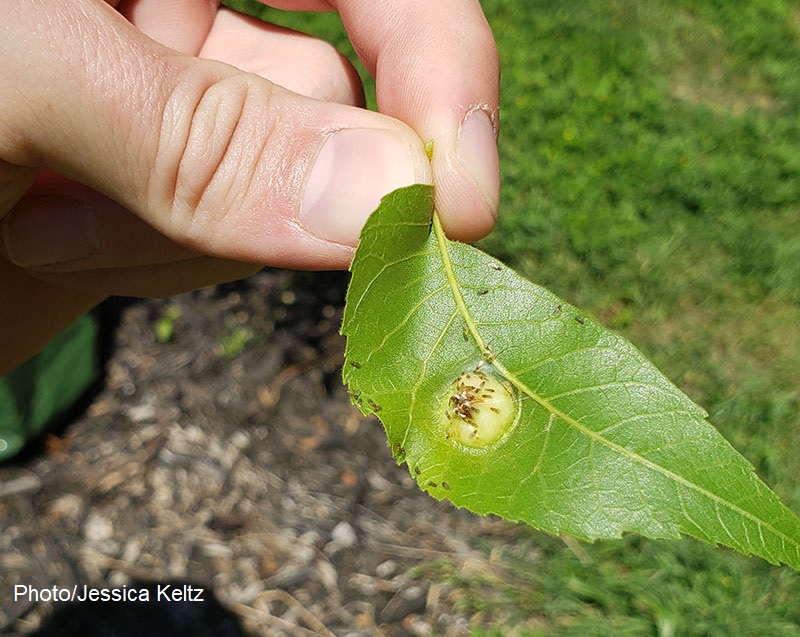 Daphne noticed: “One thing that ties these three examples together is that they were all spotted on young trees. When trees are young and small and the new leaves are closer to eye-level, we tend to notice more things about them. Once trees are tall, they are still susceptible to leaf-gall inducing insects, we just don’t notice them as much.”