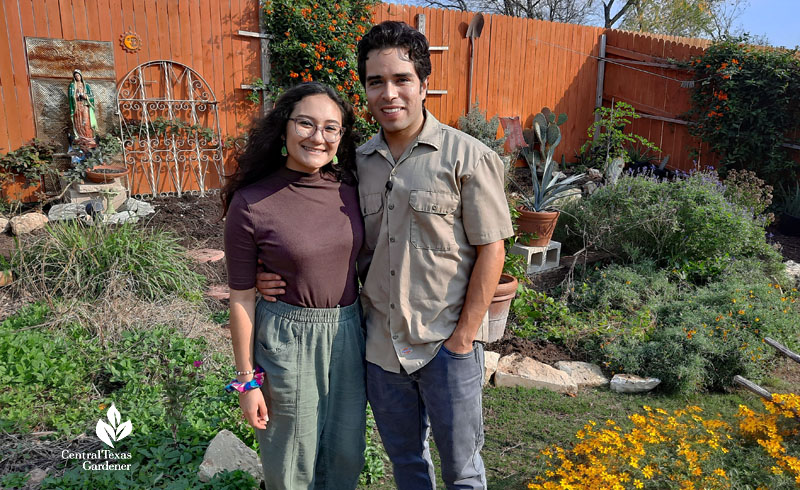 A fence and lawn: that’s what faced thrifty first-time gardeners Ashley Nava-Monteros and Carlos Monteros at their new house in Hutto. Originally from El Paso, they brought together plants and art that honor their cultural history and support wildlife with native and adapted plantings that thrive on clay soil. “I would describe our garden as the Southwest cottage. I just love all of the flowers. Carlos seems to be more of the cacti enthusiast,” Ashley told us. 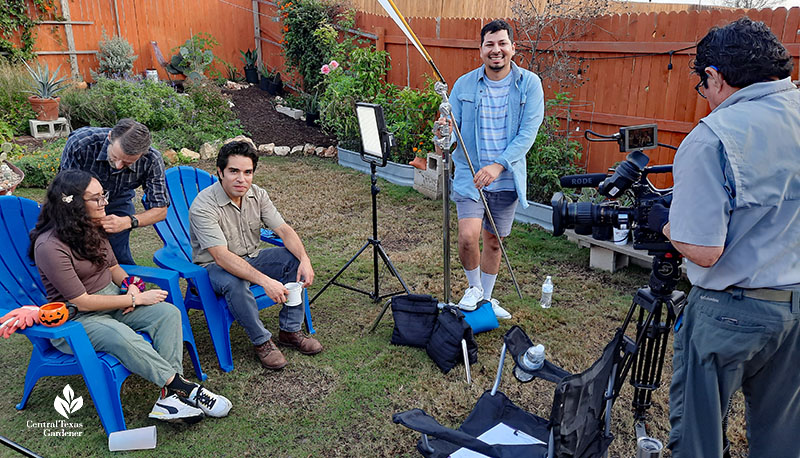 On a hot humid December day, the CTG crew headed out to meet them: director Ed Fuentes, grip Steve Maedl, and Decibel intern Jonathan Puente. We were absolutely astonished that Ashley and Carlos created this wildlife habitat and family haven in less than two years. 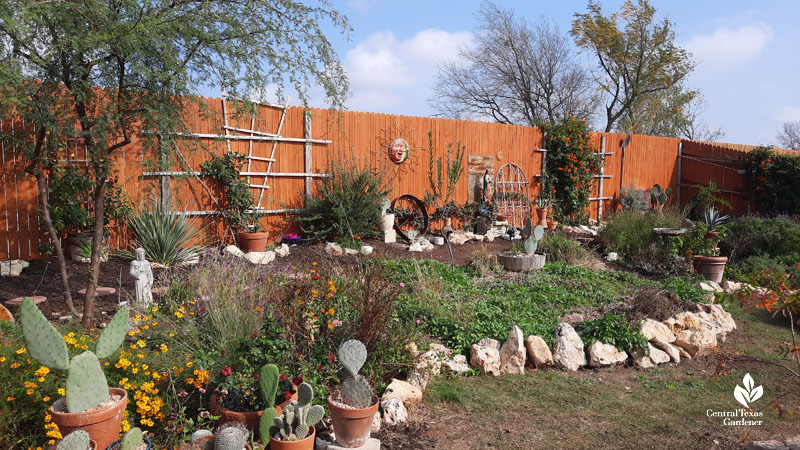 It was after the February 2021 freeze that they started pulling away the new Bermuda grass laid by the builder. The back part is on a slope—essentially a berm—so they played with how rainfall travelled it. Another challenge: they’re on the Blackland Prairie which means sticky soil after heavy rain and big cracks in dry weather. Compost and mulch have helped, but selecting tolerant plants was most important. 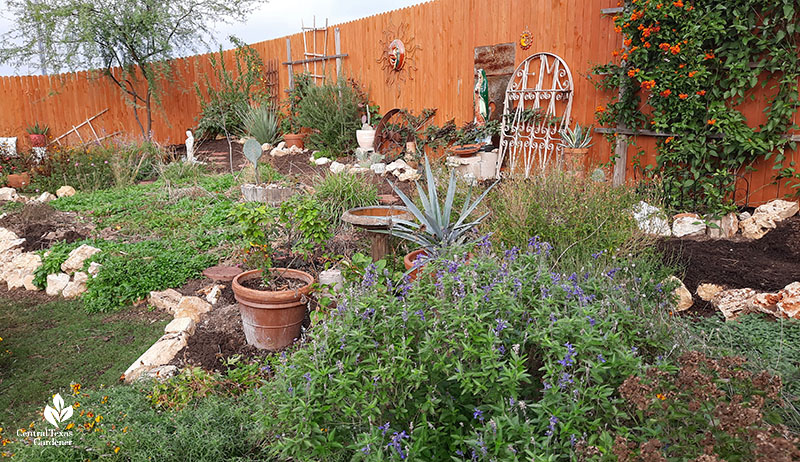 They created borders and anchored tiers with limestone rescued from nearby development excavation. Carlos installed bigger plants first, including a huisache that anchors one corner. At the other end, he replaced one that didn’t make it with a native anacacho orchid tree (Bauhinia lunarioides) 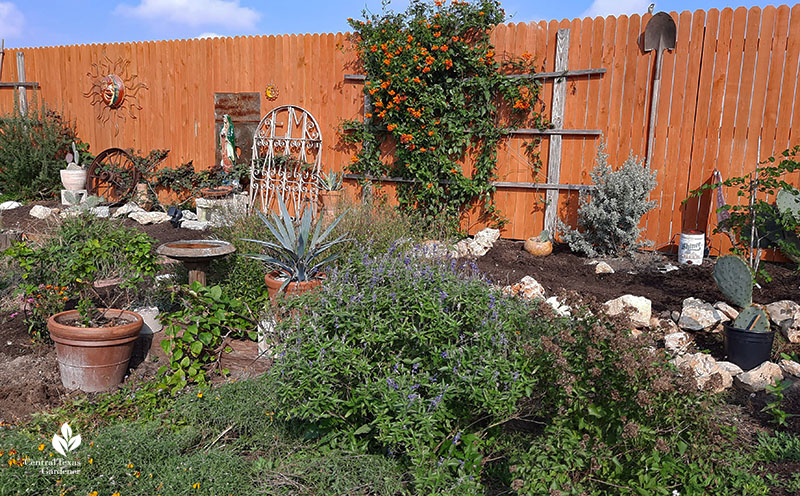 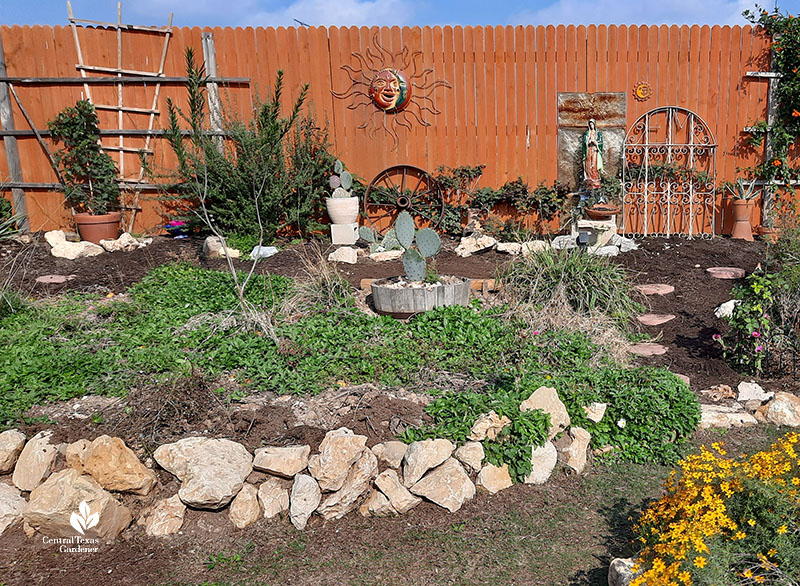 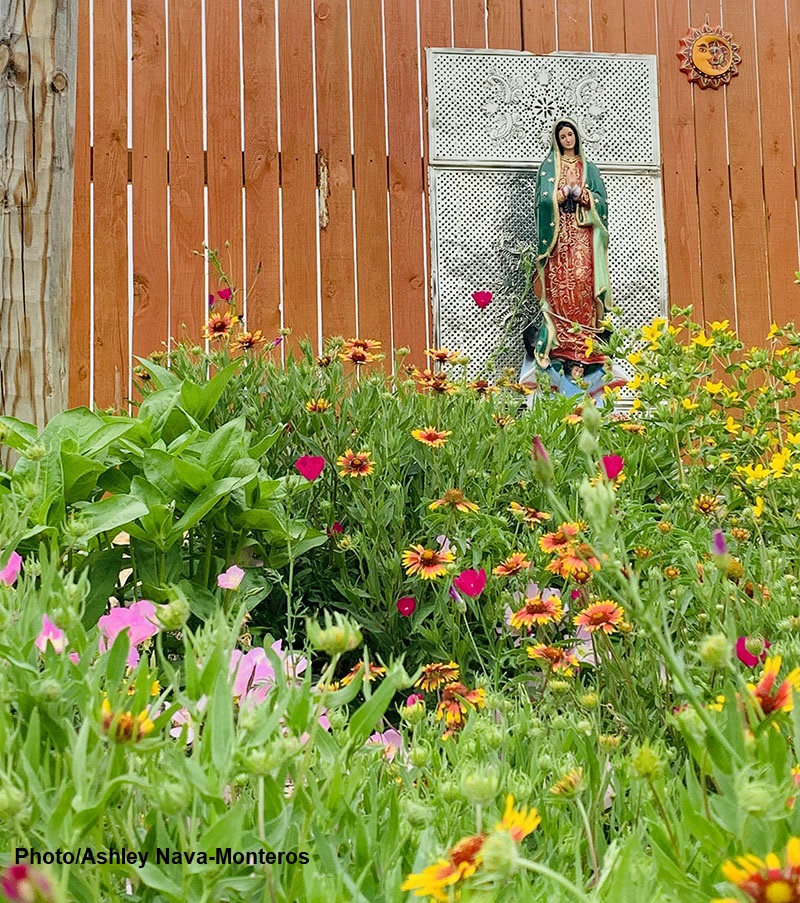 On our visit, their winter rosettes promised abundant flowers like in Ashley’s photo from last spring. 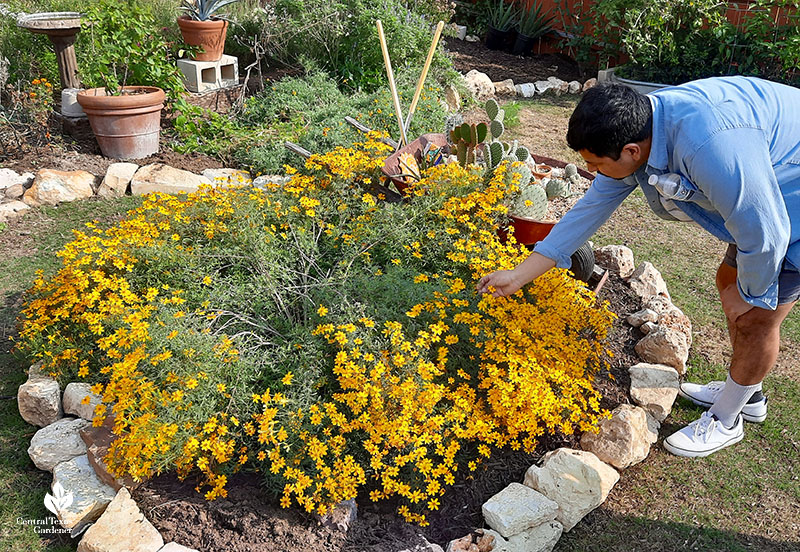 To banish more grass, they created stone-bordered islands. This one hosts native perennial Copper Canyon daisy that flowers summer to fall (and obviously into winter, despite November’s nips). Jonathan joined us all for a finger-brush whiff across its minty-fragrant leaves. 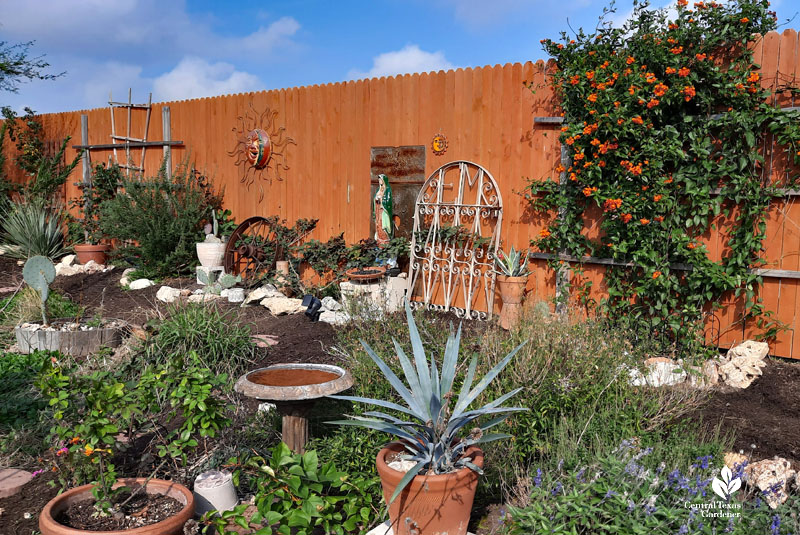 Ashley and Carlos are thrilled about all the wildlife that already found their garden. “The birds, the bees, the butterflies come in and just seeing how minimal effort it took in some ways, right?” Ashley said. “I mean, like just having a birdbath, having a bird feeder, and having the plants and just kind of creating that habitat.” 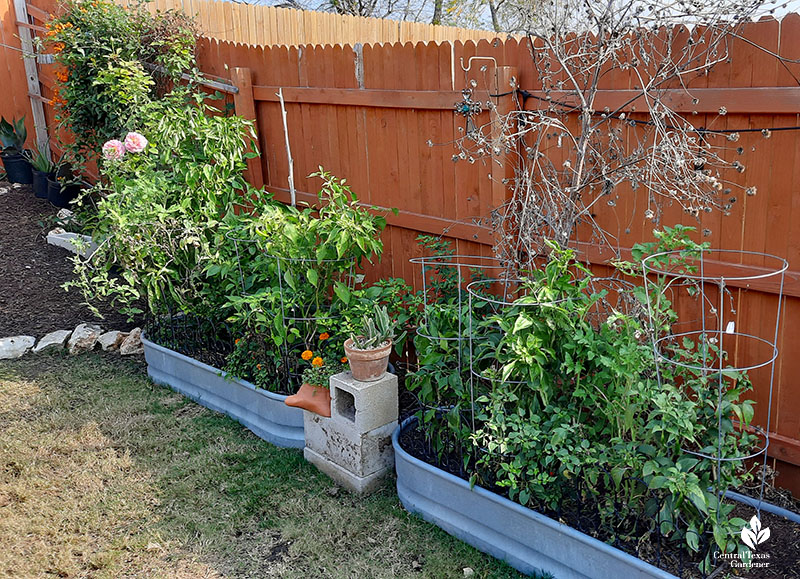 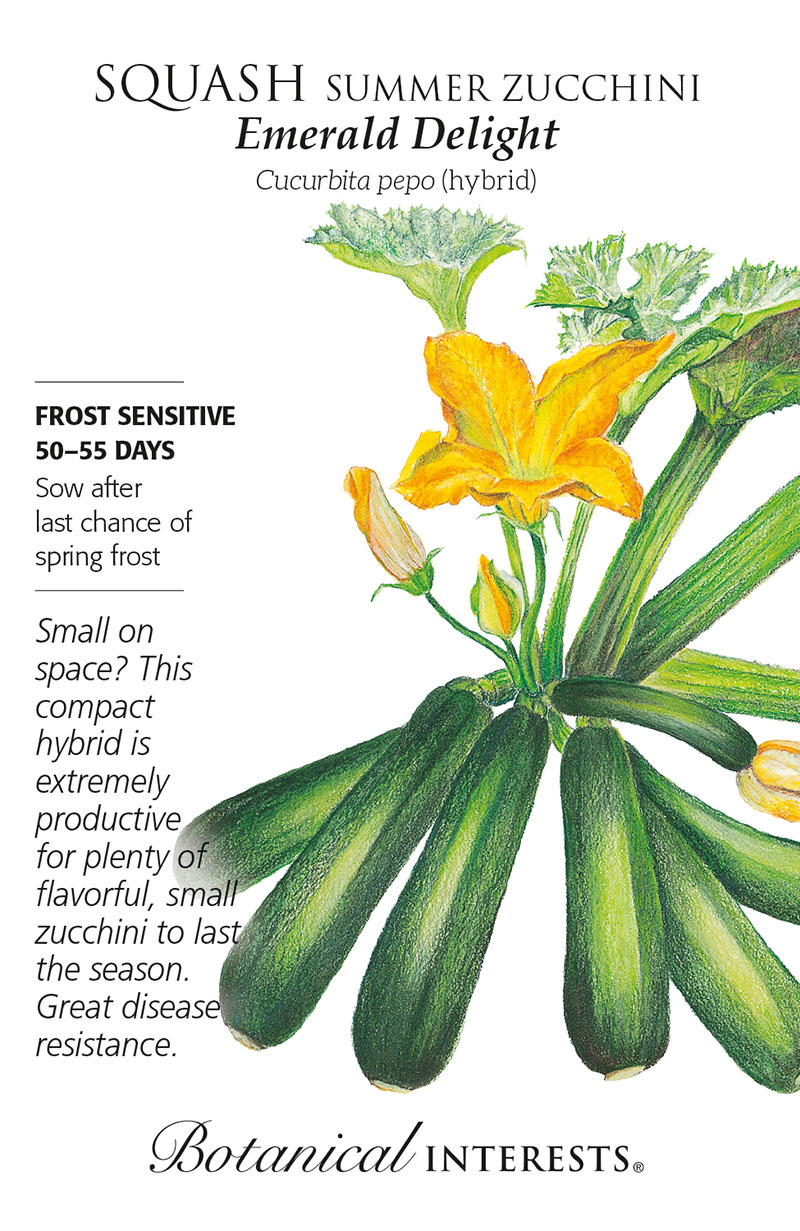 In a raised bed from scrap lumber, last summer they grew Mexican squash (calabacita), another favorite plant that reminds them of home. Ashley and Carlos make delicious quesadillas from the flowers, sauteed a bit with onions and garlic. 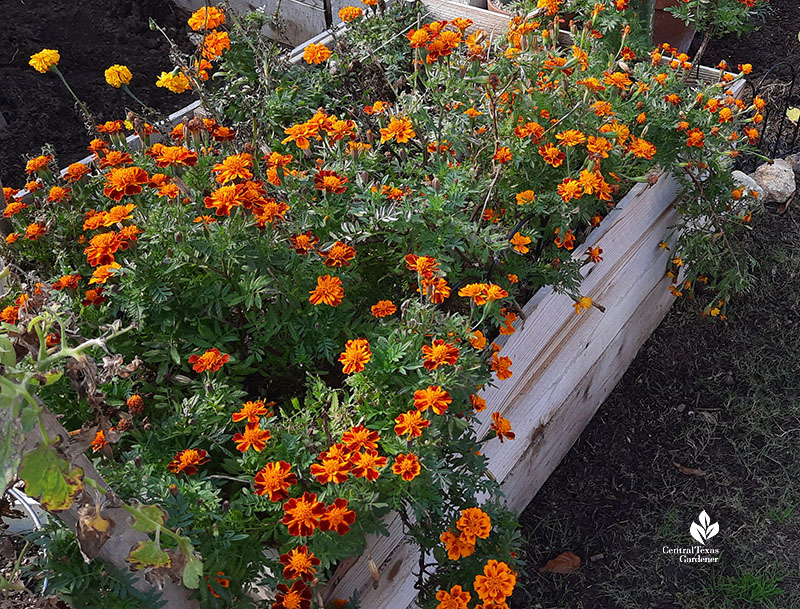 Squash vine borers didn’t ravage their crop. Some gardeners report that calabacitas don’t seem to be as susceptible. Although the plants were through by December, companion marigolds still glowed, reputed to repel certain crop pests. 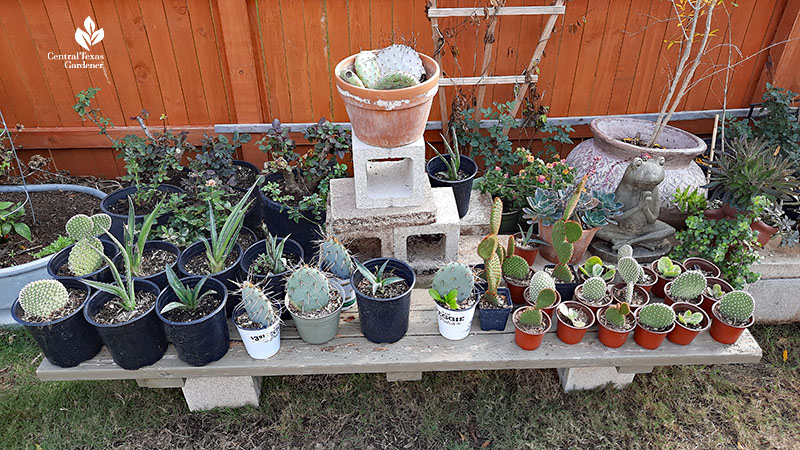 With limited funds, they source materials from neighborhood groups and others willing to share their leftovers for free. Carlos built a table for his growing collection of succulents with boards and cinder blocks. 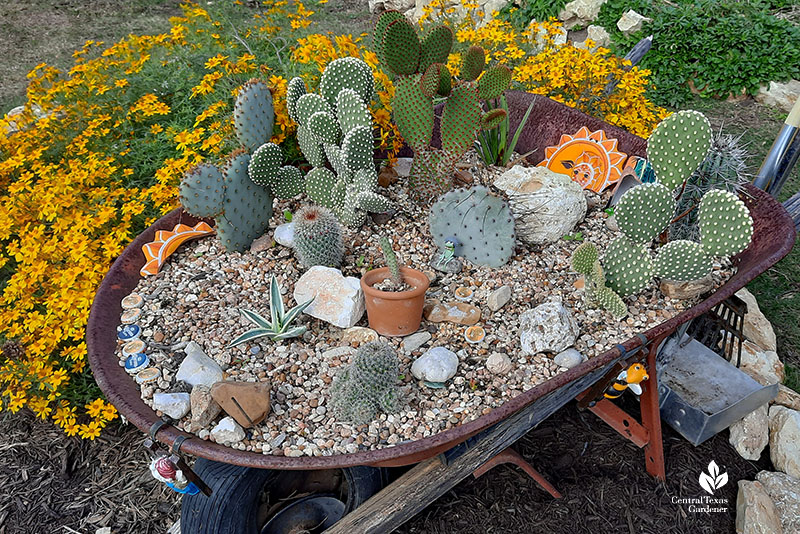 Carlos nabbed a “come take it” wheelbarrow retired from duty, perfect for his growing collection of agaves and cactus. They add whimsey with cute figurines that his mom finds in Juarez. 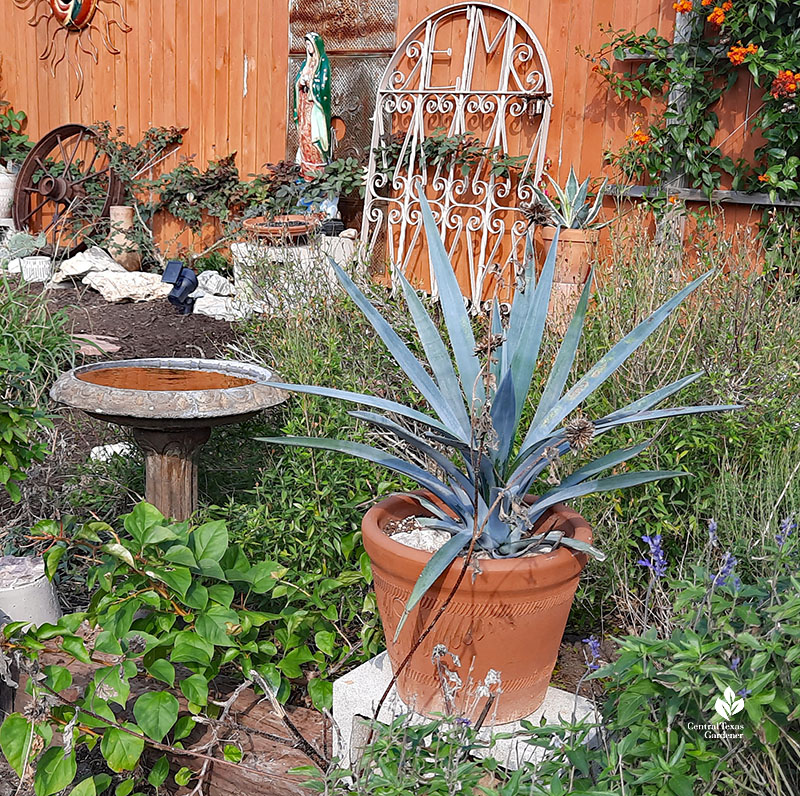 His baby is a silvery tequila agave (Agave tequilana) he brings inside when temperatures drop. 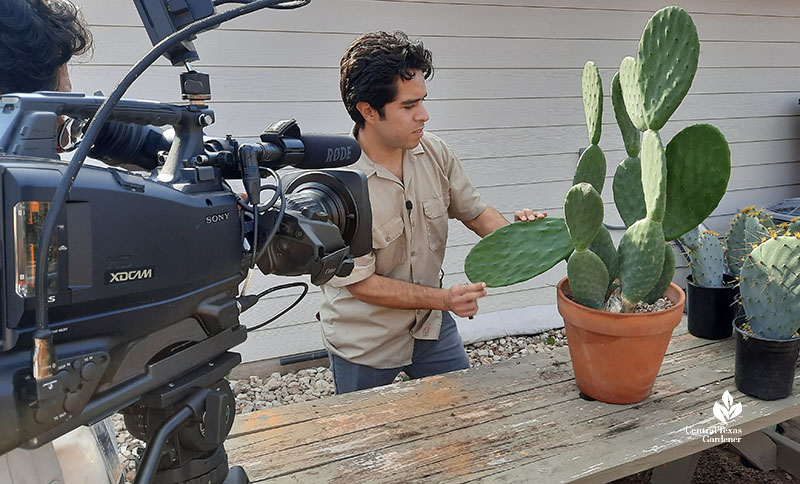 He demonstrates how to propagate a prickly pear by twisting off a pad (nopal). Let it dry out for a few weeks and plant in a gritty soil mix. This huge plant he started from a Mexican supermarket nopal. 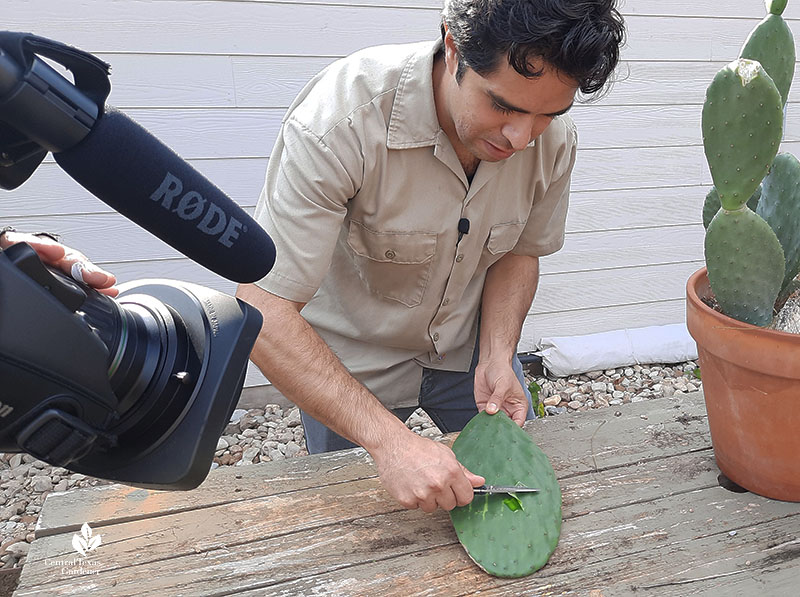 Nopales can be sauteed, boiled, or eaten fresh. Carlos shows how to prep them to cook with eggs or for a nopalito salad. 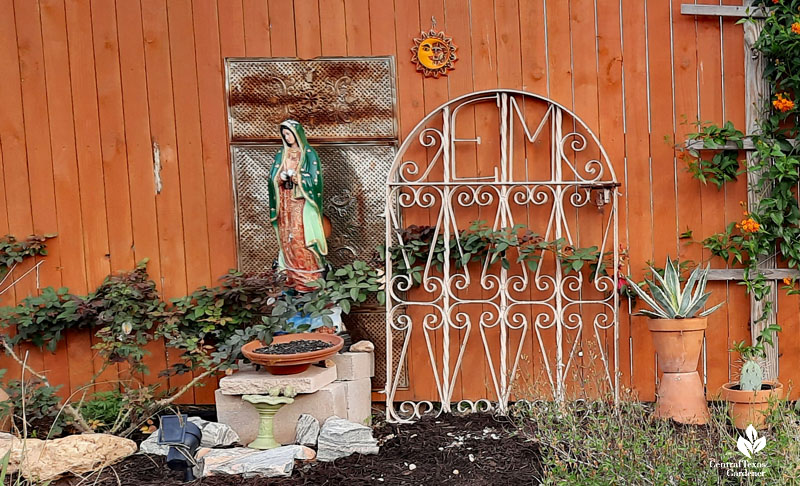 “We come from central El Paso and specifically our neighborhood there’s maybe five or six Virgin murals within a one-mile radius,” Carlos said. So I think it was important for us to put the Virgin [of Guadalupe]. It’s kind of like a calling from back home. And then, you know, she’s a matriarch of not just the nation, but she’s the matriarch of the people.” 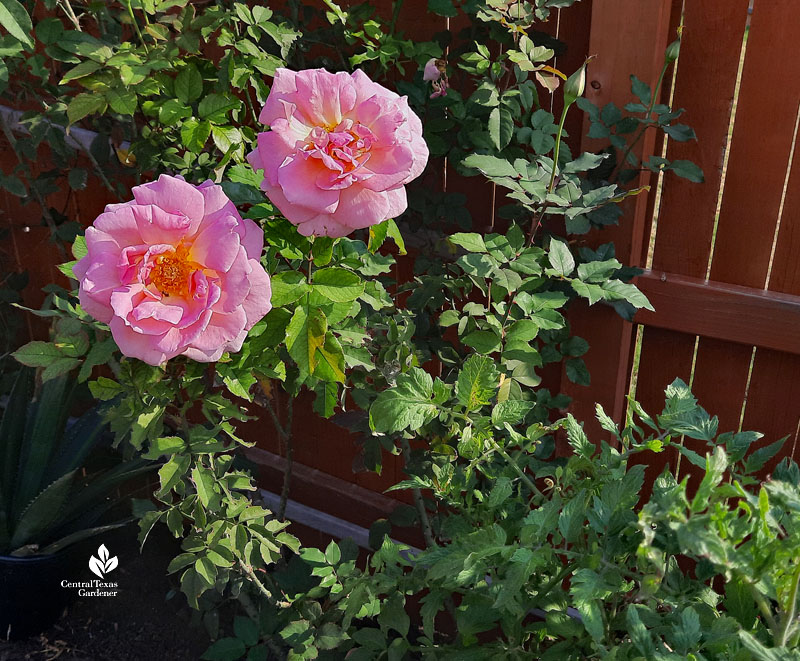 He plants roses, like a ‘Tiffany’ hybrid tea (named for the Tiffany artisans), to honor of the story behind Our Lady of Guadalupe. “Juan Diego brings roses to the Bishop of Mexico and supposedly roses, Castilian roses, don’t grow in Mexico. But he brought the bishop those roses to prove that he did see the Virgin Mary,” Carlos told us. “I really like marrying myth and the garden; that’s why I like growing a lot of plants because there’s a lot of symbolism behind a lot of them.” 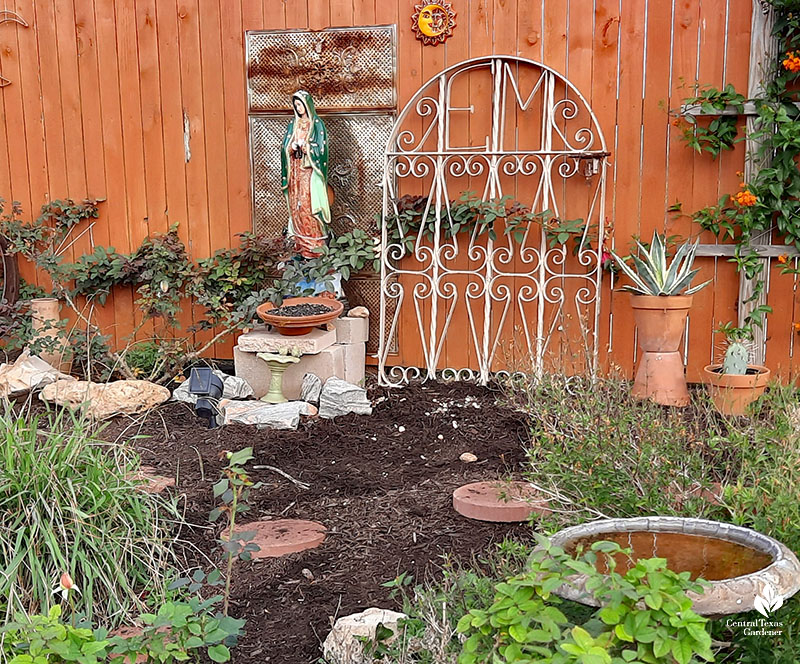 Lady In Red™, a compact climber, unites their Virgin of Guadalupe with another sentimental addition: a gate from his family’s garden, crafted around his dad’s initials. 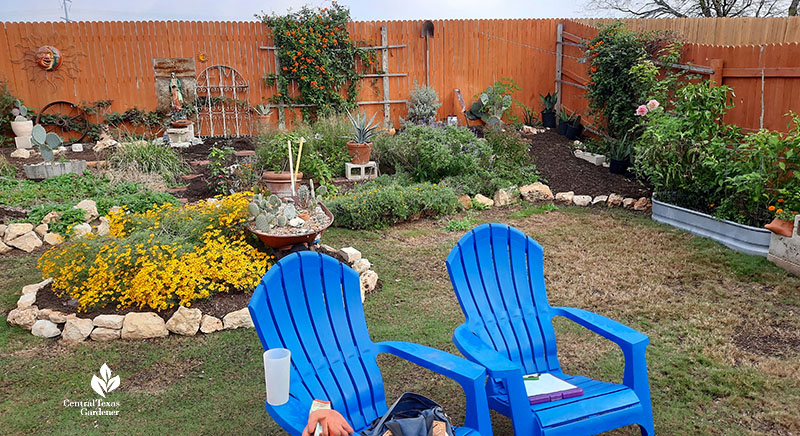 In such a short time, Ashley and Carlos have harvested far more than flowers and food. “I never thought that I would experience such beauty in my life and that, you know, that we’ve been co-producers of it, you know? And it’s really been just kind of co-creating with with nature, and it’s just been so much fun,” she said. 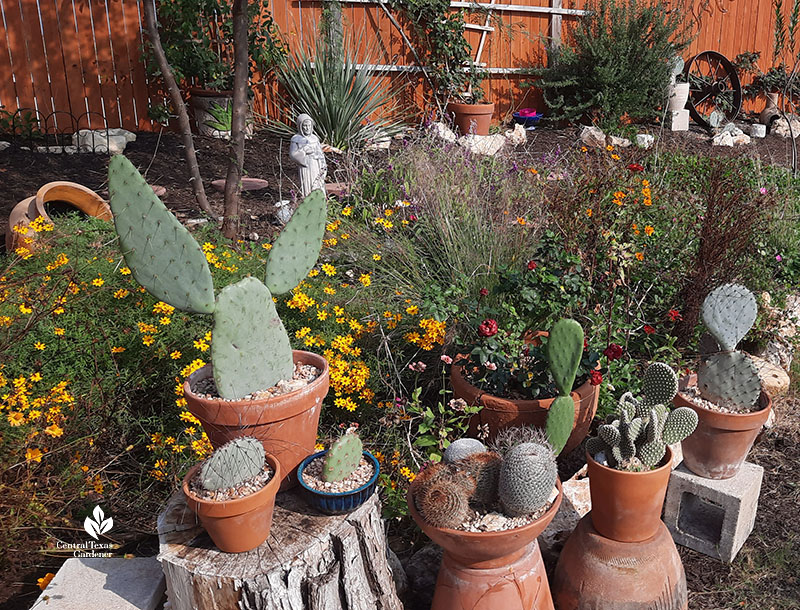 Carlos added, “If you really want to express yourself artistically, there’s so much depth in gardening because there’s there’s smell, there’s color, there’s seasons. So it’s the most rewarding expression of oneself.”

And thanks for stopping by!
Linda