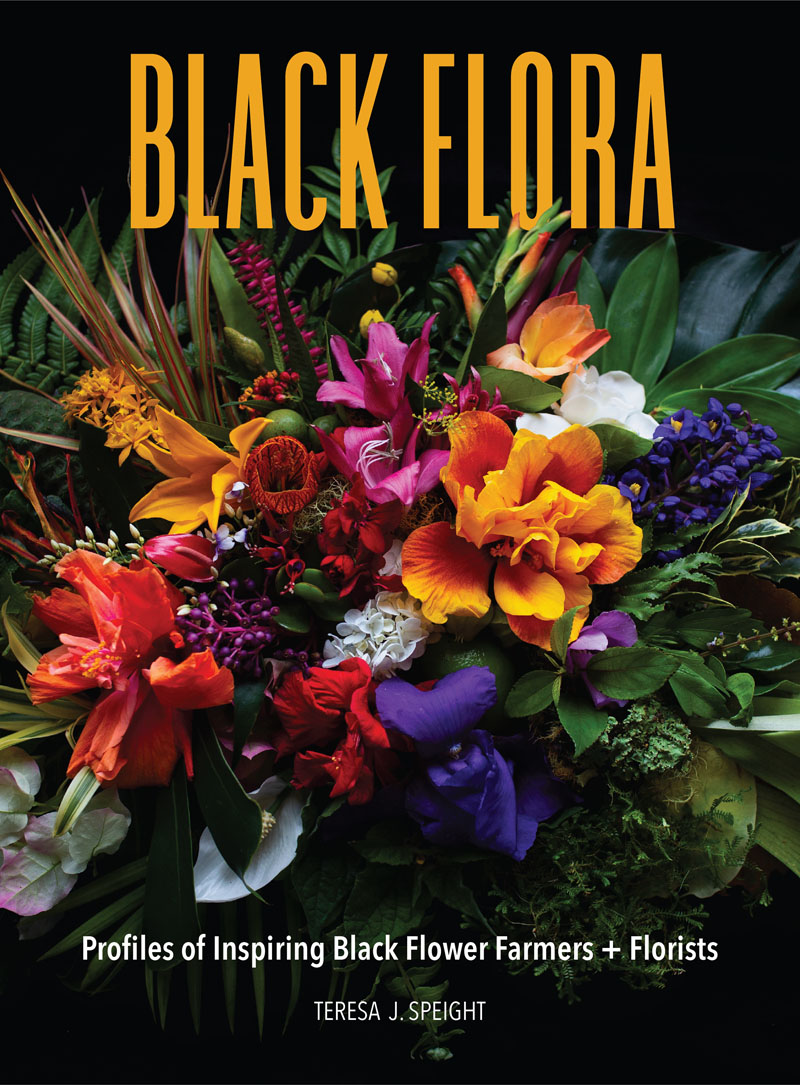 “Now, I am beginning to bloom and as I unfurl, each petal is different, each experience adds fullness to my life,” Teresa Speight writes in the forward of her book Black Flora, Profiles of Inspiring Black Flower Farmers and Florists. 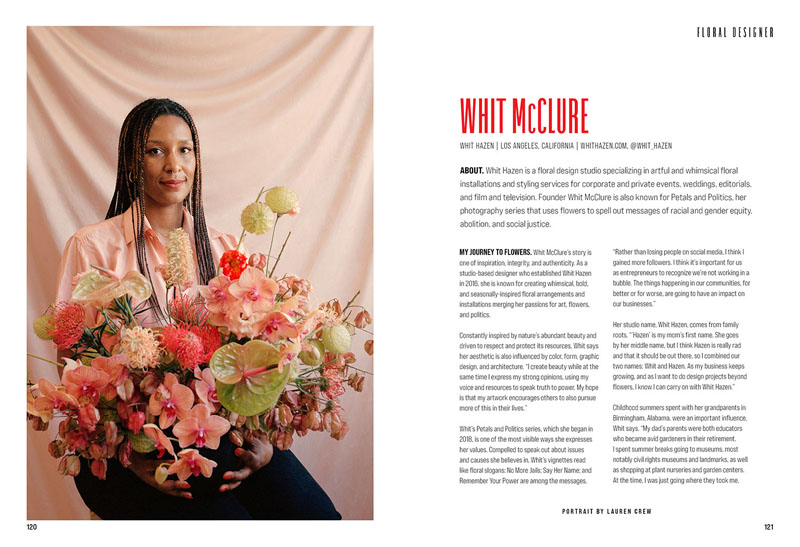 Spotlighting the poignant stories of African American and indigenous flower farmers and floral designers, Teri gives voice to passionate, often overlooked makers, and how they started on their paths—many changing mainstream careers—to empower the next generation. 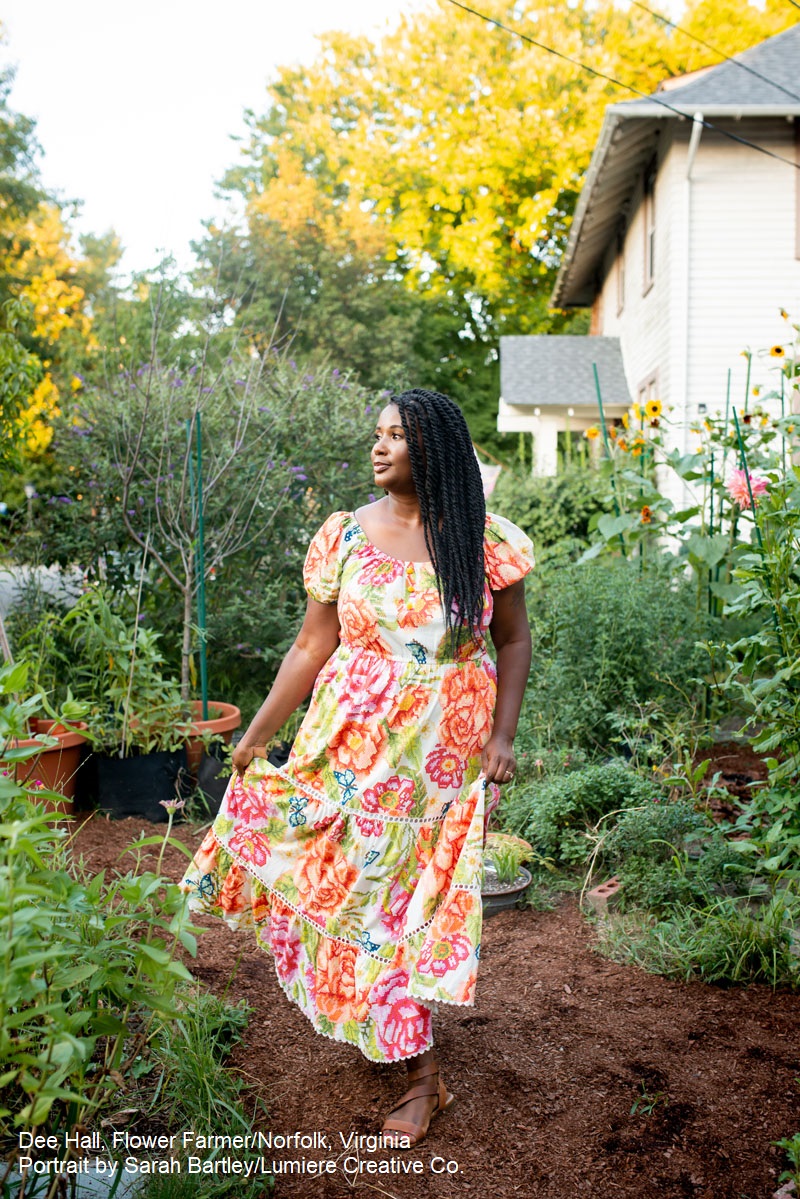 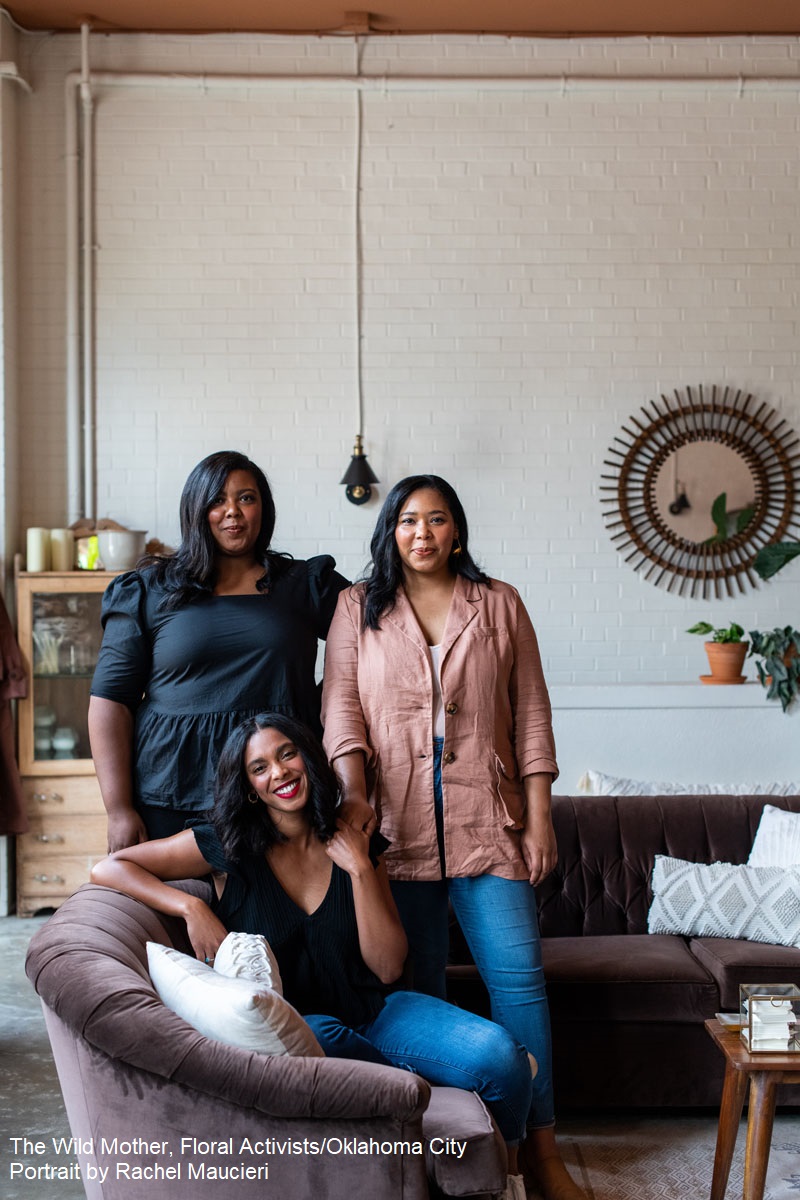 “Or they wanted to connect with their ancestry, which in another way the seeds were sown before them and they just cultivated that gift of being a seedling and made it their reality. That’s powerful. And everyone had their place of importance. Everyone.” 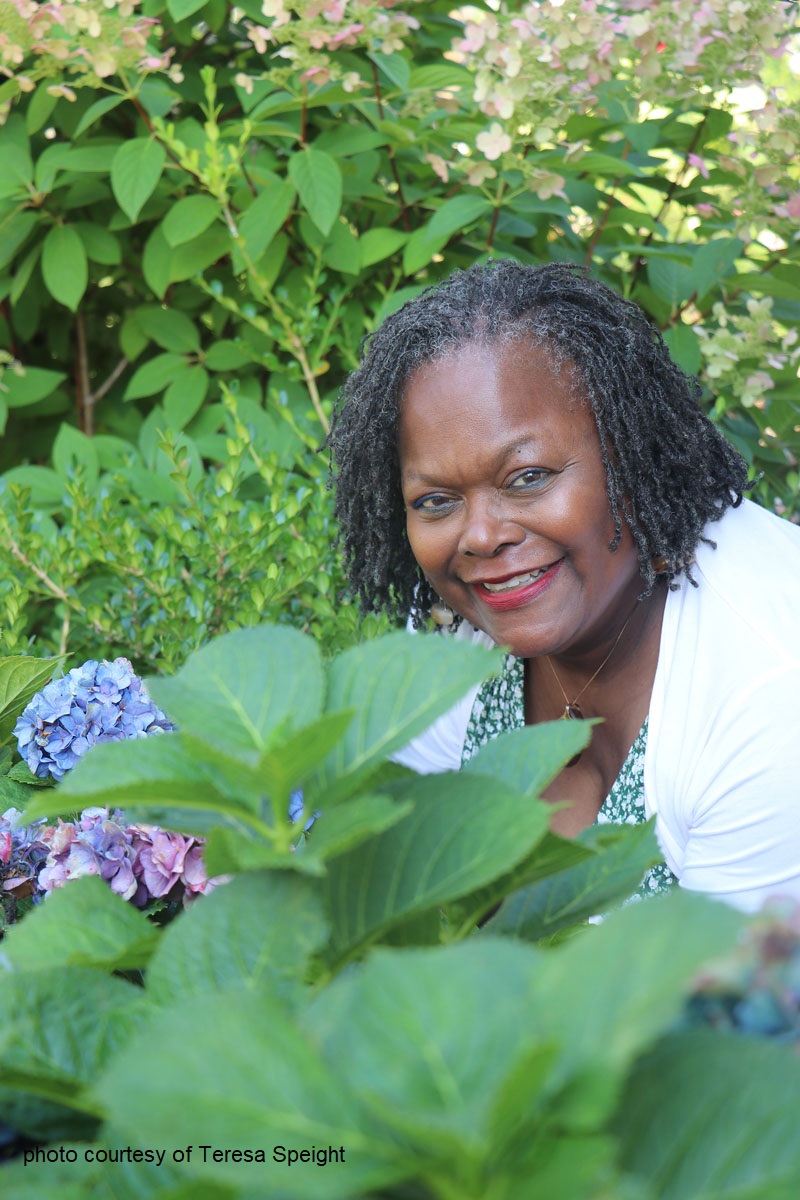 Authorship is just one petal in Teri’s busy life filled with family, cute pup, full-time job, and charming Maryland garden. She’s a forward-thinking leader in urban gardening engagement, insightful garden writer at Cottage in the Court, a philosophical podcaster, and engaging social media journalist on Instgram and Facebook. As a child in Washington, D.C., her parents unfurled her love of plants. One of her fun dad memories: “[We] would have these conversations on the carport breaking down Latin—the real way you say words and the real way you don’t. My dad and I were very close.” 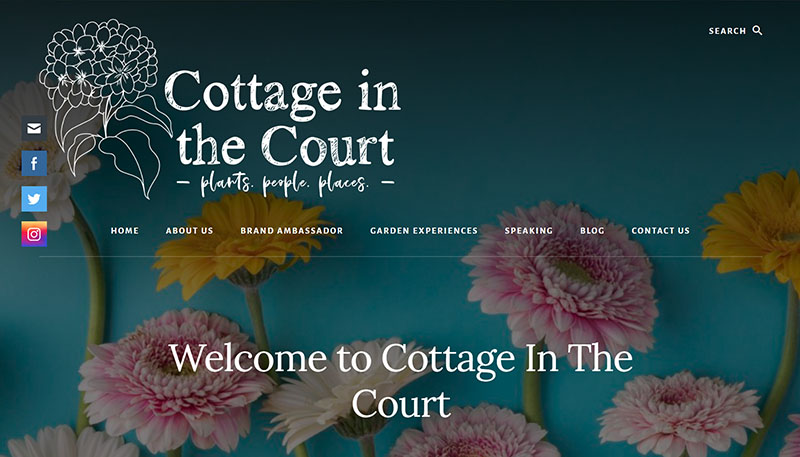 In every pursuit, she frames down-to-earth practicality with philosophical depth to connect our essential roots to the soil. “And I try to be user friendly in my approach and help people really understand and embrace the beauty that surrounds us,” she says. 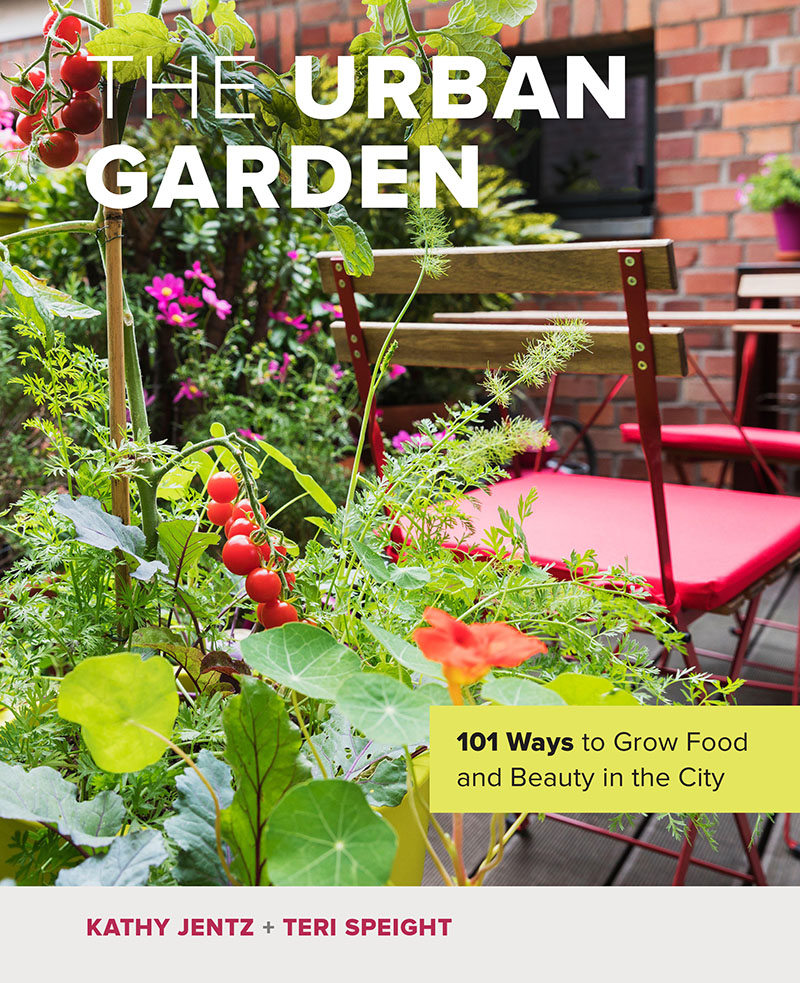 In response to the growing number of new gardeners in small spaces and on tight budgets, she and Kathy Jentz co-authored The Urban Garden: 101 Ways to Grow Food and Beauty in the City, published in April 2022.

I met Teri at a professional conference in 2017 where her passionate, joyful, and thoughtful conversations prompted me to stay in touch through social media. We met again at Garden Bloggers Flings (now The Fling), but it was in October when she came to Central Texas Gardener, thanks to Pam Penick. She’d invited Teri to her Spark garden speaker series at Barton Springs Nursery and asked if we would like her to join us for a conversation about Black Flora. You bet! I’d read each inspiring story months before, but hoped for a chance to connect with Teri in person rather than via Zoom. 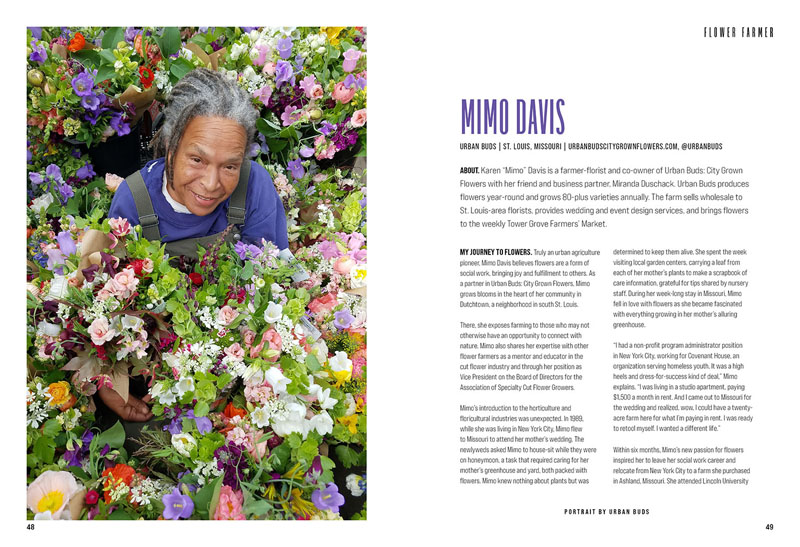 Even as she was writing The Urban Garden, another project close to the heart came her way. “One of my editors, Debra Prinzing, said, ‘Teri, let’s do this project together.’ And I jumped at the opportunity because to elevate our voices is important. To let people know that we’re not a monolith is important. So I was more than happy to share this,” Teri remembers. 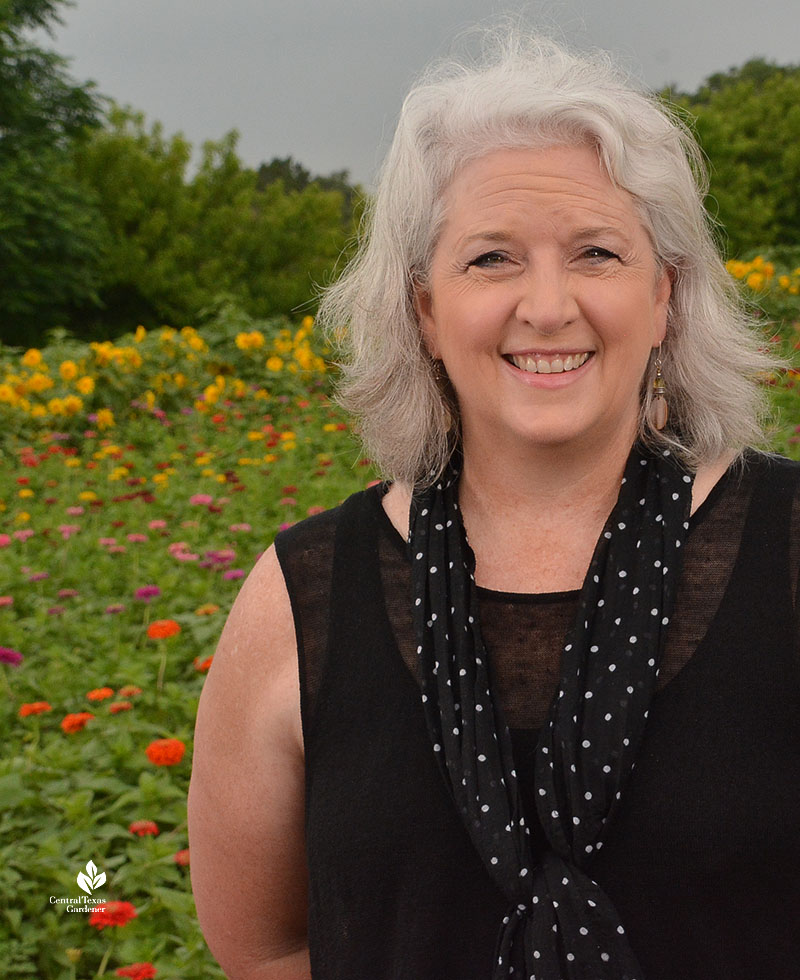 I first met Debra Prinzing in 2008 when she wrote Stylish Sheds and Elegant Hideaways and joined us at CTG. Then, she launched Slow Flowers to support American-grown flowers from farmers to florists and floral designers. In 2021, she and Robin Avni co-founded Bloom Imprint to identify, develop and publish projects that shine a light on floral lifestyle across the country. 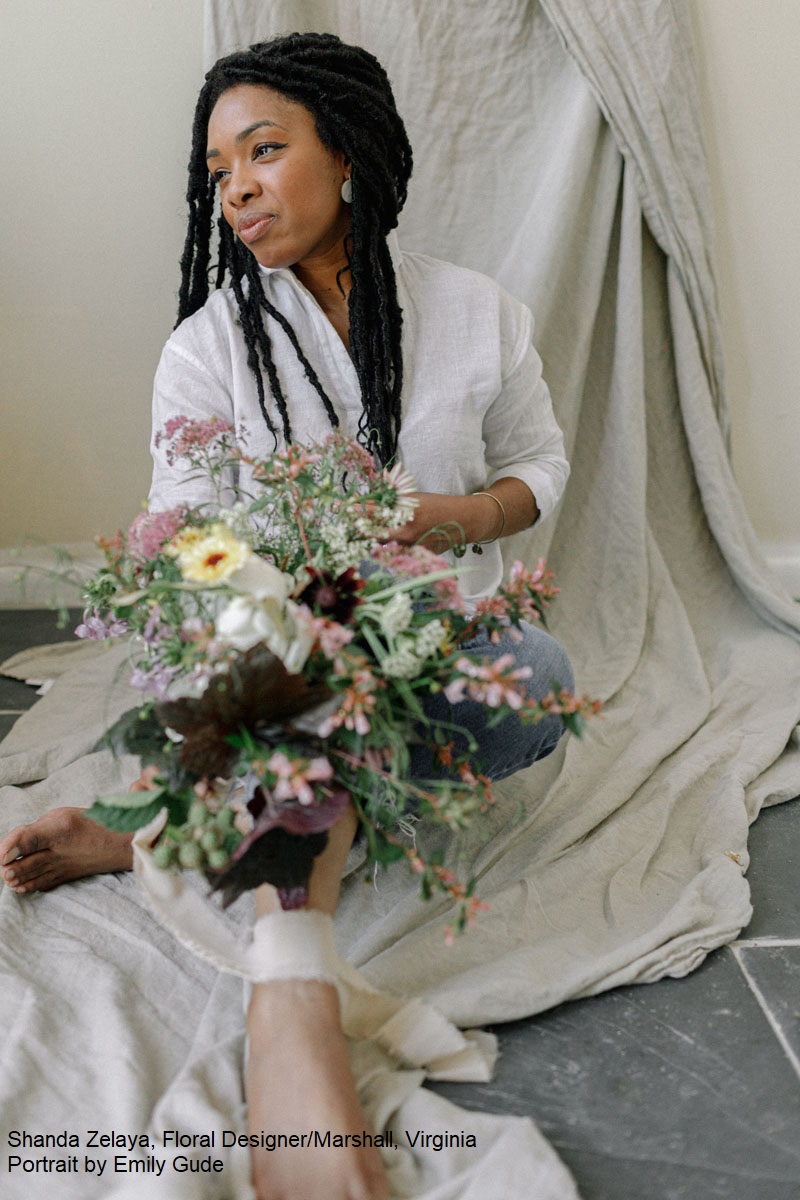 Black Flora gave them the opportunity to showcase often overlooked floral makers and their historical roots. “It was important because we don’t hear about them,” Teri says. 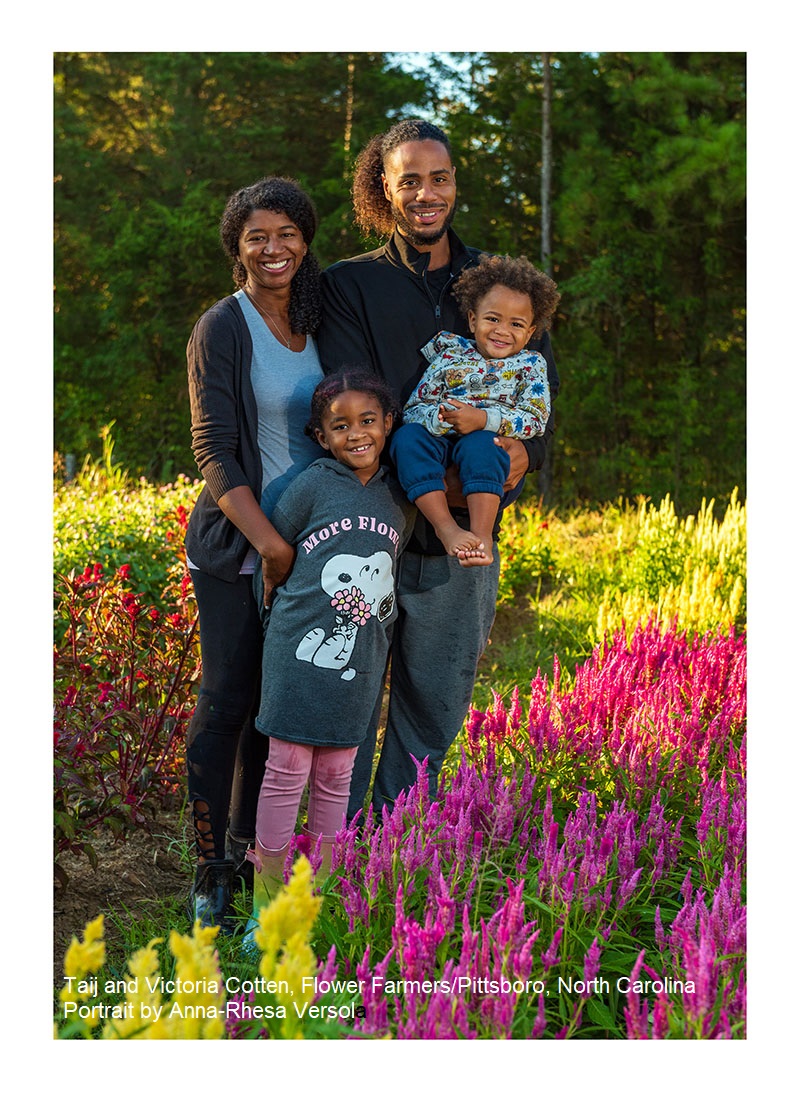 “When you think about it, you hear about a lot of flower farmers, but they’re not people of color. So we’ve had this thing going on, but no one’s ever heard about it. We’ve missed opportunities and it was important to bring it to the forefront.” 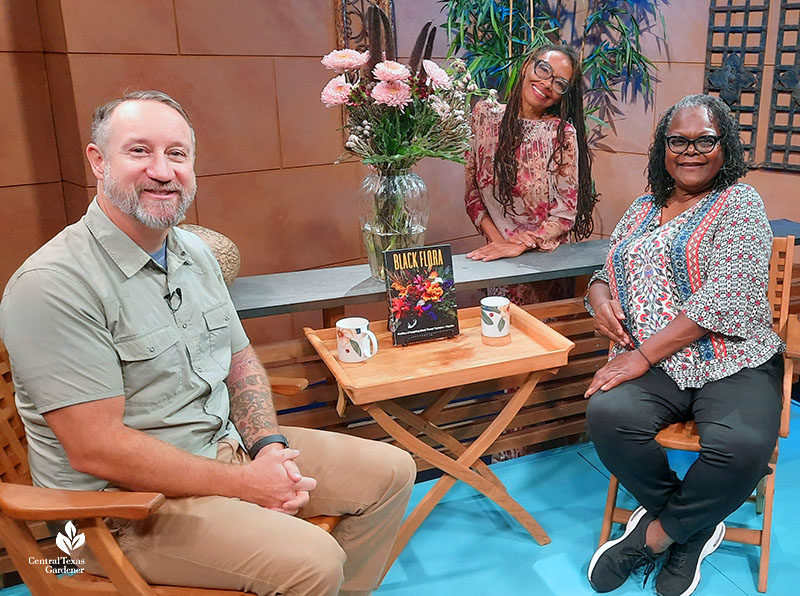 Our new studio at the Austin PBS Austin Media Center is still in sapling stage technically, including cameras, set and lighting details to come. Still, its recording debut was momentous when John Hart and Teri’s animated, powerful conversation drew us into stories of the past that led to the present and the future. To make it even more special, local Black floral designer, gardener, and educator Harvé Franks, gardening specialist at the George Washington Carver Museum, created the beautiful cut flower arrangement, a local celebration to christen CTG’s unveiling.