What’s the secret to the best gardens? Get the answer as we go underground with George Altgelt from Geo Growers. On tour at the Texas Quilt Museum and Grandmother’s Flower Garden in La Grange, see how quilts and gardens unite. Daphne explains why wildflower Indian paintbrush switched colors. Trisha scents the garden with lavender and how to pick the best one.

What’s the secret to the best gardens? Get the answer as we go underground with George Altgelt from Geo Growers.

Why did Indian paintbrush bloom in white and yellow?

Thanks to Betty and David DeVolder for this great question! They have a gorgeous field of Indian paintbrush, but this year, yellow and white flowers showed up too. What’s the deal?

Well, with all the recent flap over “maroon” bluebonnets showing up on the University of Texas campus here in Austin, you might already know the answer:  genetics.

Like all living organisms that reproduce sexually, wildflowers have genes from two different parents, each with their own unique characteristics.  And some of those characteristics are dominant, while others are recessive.  If the recessive trait gets passed on to the offspring from both parents, that trait will be visible.  But usually, the dominant trait gets passed on from at least one parent, so the recessive trait doesn’t get expressed.

And in Castilleja, or Indian paintbrush, orange-red is the dominant floral color.  But we asked Damon Waitt at the Lady Bird Johnson Wildflower Center about this, and he told us that there are also light yellow, and even white-flowering variants of this plant in nature.

If you want to save seeds from the variations, make sure that the flowers were not cross-pollinated by any of the nearby, normal, red ones, perhaps even encouraging self-pollination.  And then return later to collect the seed and steal them away to plant and propagate in a greenhouse, where you could be more protective of their promiscuity.

But there are a few other a couple of other details about this wildflower that might make you think twice about taking on this task:  not only does it have a hard seed coat, requiring very specific climatic conditions to germinate, it’s also a hemi-parasite.  And that means that Indian paintbrush has to be planted near certain other host species plants, or it won’t grow.

Bluebonnets are just one of the host species for Castilleja, which is why you often see them growing together in wildflower meadows.  Some of our native prairie grasses and sedges can also serve as host species.  So you see, isolating and producing all of the wonderful plants that we have available for our modern gardens is not as easy as it may seem. 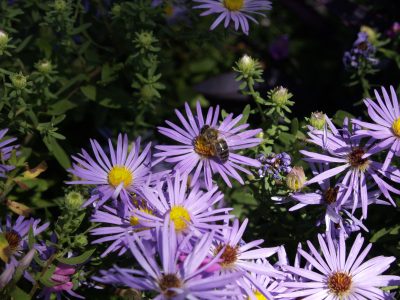 I don't know about you, but I almost thought that fall would never arrive. But it finally DID, and fall aster arrived with it. This is one of our great Central Texas natives that can always be relied upon to rejuvenate our gardens and our spirits after a long, hot and dry summer. Fall aster is a smallish, mounding plant, usually staying less than 2' tall and about as wide, although it can get as tall as 3'. It looks great planted in the foreground of other fall flowering plants, and along the edges of planting beds. These little guys are simply covered in flowers in October and November, making them a real show-stopper in the autumn landscape. Bees, butterflies, and other insects love this plant for its fall nectar. Fall aster is a perennial and is hardy all the way to USDA zone 4, so it has no trouble at all with our winters here in Central Texas. It prefers well-drained soil and needs very little water once established, so be careful not to overwater it. And as with most of our native, low-water use plants, fertilization is really not necessary. They want sun but can also take part sun to even shadier, but will perform best with at least 4 hours of sun. It doesn't matter if it's morning or afternoon sun; asters are very adaptable. Their top growth will die back with the first hard freeze. You can wait until spring to cut them back to ground level, or tidy up sooner. Generally, their tidy rosettes appear by early winter. Cut back the stalks to enjoy their winter groundcover. You can plant naturalizing spring bulbs among the rosettes for a pretty winter picture! Cutting them back a few inches throughout the spring reinvigorates growth and makes the plants bushier and healthier, and encourages the plant to form more flower buds. You want to stop pruning by July to allow flower buds to set. Asters are easily divided. When the rosettes form in winter, dig some up and move to other spots. Although we've all learned the hard way that nothing is deer proof, fall aster's aromatic leaves are a little pungent and make this plant deer resistant.

Trisha scents the garden with lavender and how to pick the best one.