It’s tree planting time! E.E. “Mitch” Mitchamore from Hill Country Natives selects native trees for shade, understory, fruit, and wildlife appeal. On tour, see how Jackie Davis turned a typical yard into a wildlife habitat. Daphne answers, “How can I solarize to kill grass, weeds, and nematodes?” Pick of the week is native damianita. Andrea DeLong-Amaya from The Lady Bird Johnson Wildflower Center demonstrates how to plant a container plant. Special note: The third week of October is officially Texas Native Plant Week. Check out all the activities from workshops to garden tours.

Jackie Davis is always throwing a garden party. It often includes family, friends and neighbors, but the wildlife stops by every day from dawn to dark. It’s a far different scene than when she bought her small-lot house, complete with dying trees and dog-trampled yard. Now her Certified Backyard Habitat is always full of life, including over 110 species of birds. She’s a member of Travis Audubon, the Native Plant Society and the Austin Butterfly Forum.

How do I solarize? Can I use an old shower curtain or should I use black mulch?

Solarizing is a great way to deal with nematodes, weeds, and even get rid of turf grass. You simply cover an area with plastic, weight it down so that it doesn’t blow away, and let the heat of the sun bake the area underneath.

Nematodes are parasitic round worms that live in the soil and invade the roots of plants. Once you have them, you can never truly be rid of them, but solarizing the soil does knock back the population pretty significantly. After replanting in a solarized area, the nematodes will bounce back, so solarization is really most effective in vegetable beds, where you can solarize the soil between planting seasons. To best keep the nematodes in check, you should solarize at least once a year, for at least a month (or longer if you have a really bad infestation), in early spring.

Clear plastic works best here (like that old shower curtain) since the sun shines through to the soil and creates even more heat under the plastic, due to the greenhouse effect.

Solarizing also works well when trying to get rid of weeds and turfgrass, for example, if you’re trying to remove the grass in order to put in a planting bed or other landscape element. In this situation, it might be better to use black plastic, so that you cut the plants off from sunlight, forcing them to use all of their stored carbohydrates to grow, but leaving them no way to photosynthesize and produce food to replenish the energy that they’re using.

Solarizing works very well on plants with underground storage organs like bulbs, rhizomes, and stolons that are very difficult to get rid of by pulling or even with herbicides. If you are trying to get rid of pernicious weeds, like nut sedge, or nut grass, as it’s more commonly called, or Bermudagrass, solarizing multiple times will be necessary. 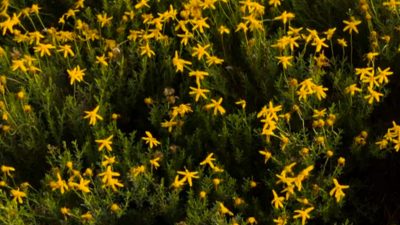 Damianita is an evergreen low mounding subshrub. Subshrub is a term to describe a plant that's kind of shrubby and woody, but it doesn't get very big. This one has vibrant yellow flowers and a deep, forest green, aromatic foliage. It grows very low to the ground, so if you wish to smell this plant, it is best after a rain. Cut a few leaves and bring it indoors to enjoy in arrangements! It gets about 12" tall and 2" wide, with flowers the stand up to catch your attention. It does get a little straggly in extreme heat. Just shear it back to promote new growth and maintain a lush appearance. Clump it in pockets for the most outstanding effect. Damianita is native to west Texas, and normally is found on south-facing rocky slopes. That means it demands perfect drainage! It's perfect in decomposed granite walkways and accenting mounds. Don't amend with too much organic matter; provide extra grit if you're not in a rocky setting. Avoid too much water. Normally, rainfall alone is enough for it. In August or extended hot drought, you can give it some supplemental water. Plant in full sun. though it can take some shade. Damianita is hardy 0 degrees and accepts our hot temperatures, too. So, it's a great colorful and foliar subshrub to accent your succulents or other plants that require well-drained soil.

Andrea DeLong-Amaya from The Lady Bird Johnson Wildflower Center demonstrates how to plant a container plant.