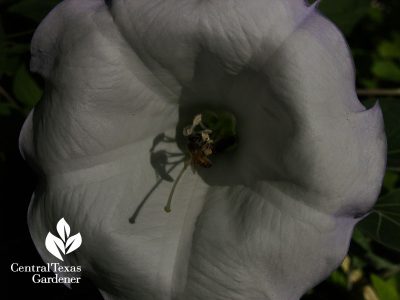 Some of the most beautiful plants that you can have in your garden are the Brugmansias and the Daturas. Daturas have been around the United States for many years. Many species are indigenous to the United States, while Brugmansias are thought to come from South America, the base of the Andes Mountains and the rich, fertile valleys there.

There are similarities. Both are very, very poisonous. All the parts of the plants are poisonous. The indigenous Indians in the respective regions used them for religious and ceremonial purposes, but they do contain some very toxic alkaloids that are quite dangerous for ingestion. So, you do not want to plant them if you have children, pets, or livestock.

That aside, they are wonderfully dramatic plants that are well worth growing. One of the more common species of Datura is Datura
Wrightii. It has this very characteristic seed pod, that’s very, very thorny, hence the common name Thorn Apple. It’s also known as loco weed or jimson weed. If cattle eat it, they do go a little crazy.

You’ll tend to find it in areas with somewhat fertile, moist soil, and afternoon shade, so you’ll have best results if you duplicate that situation.

The Datura leaf tends to be kind of fuzzy and a little grey. These plants do better, I think, if you keep the seeds cut off.

They’re not terribly picky about watering; they’re fairly drought tolerant, they just need occasional deep watering and they’ll give you lots and lots of blooms. Sometimes, you’ll see a hundred fragrant blooms on one plant. They open up at night so make sure you put them in an area in your yard where you can enjoy them in the evening.

There are some wonderful double flowers, too. Today I brought in Datura Wrightii and Datura Metel. The Daturas tend to have more
purplish stocks on them and are easy to grow from seed.

The Brugmansias are more woody, so they can be grown from cuttings quite easily, and is the best way to propagate them.

Their flowers tend to grow down. The plant can get as tall as 25 feet.

They do grow rather easily from woody cuttings but you want to make sure that you’re cutting from the top part of the plant.
If you cut from the base of the plant, it will grow into a new plant, but it doesn’t dependently bloom.

A wonderful book is: Brugmansia and Datura by Ulrike and Hans-Georg Preissel. Firefly Books, 2002.