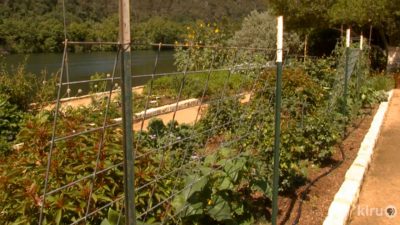 Cucumbers are pretty easy to grow. They do have very long vines, so you’ll want to have a sturdy trellis for them. I find that they do really well on my 4 x 4 livestock panel fencing mounted on T-posts. The cucumbers climb up with their own tendrils.

But there are space saver types, cucumbers that you can grow in containers. Look for bush varieties in your growing area.

Cucumber problems
They will tend to get bitter if they’re stressed by drought, so make sure that they’re well mulched and don’t let them dry out too much between waterings. They may even benefit from a canopy of shade when we start to get into the triple digit temperatures.

One thing that you might notice on your cucumbers are cucumber beetles. They’re striped or they can be a spotted type beetle. And those beetles can spread diseases. Handpick in the morning and drop into soapy water.

One of the most common problems is the wilt disease. Your whole vine will just turn brown and wilt. It’s important to get those vines out, so they don’t spread the disease to other plants and put them in the trash, not the compost pile.

You can use spinosad for the cucumber beetles and neem products for the cucumber powdery mildew and other diseases, but be careful using those because, bees will be affected by both of those products while the foliage is wet. Make sure the bees aren’t visiting your plants. Or apply in the evening so that the foliage can dry out before the bees return in the morning.

If you let your cucumbers stay on the vines too long, they will turn yellow with large seeds and not great flavor. If they get overly large like this, I’ll sometimes use them for aguas frescas or for faccials, but not so much to eat.

A cucumber that’s misshapen will often be the result of poor pollination and sometimes the bees just aren’t visiting your plants. You might want to plant flowers that bees like near your cucumbers to ensure that you’re going to have a good crop. And avoid pesticides. Again, if you must use neem or spinosad, do not do it while the bees are active.

If you don’t have bees, hand-pollinate. You can actually take a Q-tip to brush pollen from the stigma of the male flower and apply to the female flower’s stigma.