You won’t want to miss this week’s show! Tom’s garden is the video segment on our preview of the Lady Bird Johnson Wildflower Center tour. Check out CTG’s Events for tour details and how to visit Tom’s garden in person. It will also be online on our website. Be sure to check out our new Videos section, where we archive past gardens and recently, Backyard Basics segments.

I hope that you’ll contribute soon to our new CTG blog with pictures from your garden. Share your garden questions, new finds, advice, and program suggestions-it’s your site for swapping! But, as always, you’re most welcome to contact me directly at ctg@klru.org.

In my own garden, I grieved as I pulled out the old cenizo in the front bed. Death by drowning. It makes better to share a picture from its happier days. 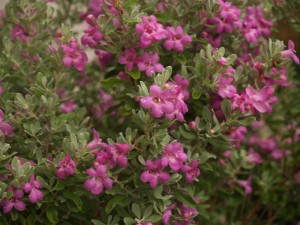 A variegated Miscanthus takes its place, in real estate, if not in heart. I do love it for its refreshing look in this sun/shade situation, and will make sure it doesn’t feel second best. 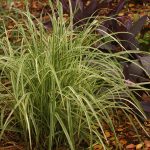 This week, at last, here’s the crepe myrtle bed tour. It’s changed a lot over the years. For one thing, shade from all the trees impacts its design. Mainly, my philosophy has changed. Rather than a blast of color in a season, it’s become a cyclical, perennial diary, with a few annuals when I’m in the mood. In addition, last year I lost a lot by drowning. I’ve added several new plants this spring and moved others around. It’s a continual experiment!

A few years ago, I took it in a new direction with my first Agave celsiis, one of the agaves that accepts shade and heavy soil. Here’s the 3-year-old with Salvia coccinea. 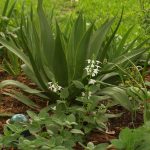 Earlier this year, I moved the Knock Out rose and ‘Hot Lips’ Salvia greggii closer to the front sun. In their old space, I moved an Agave celseii for the second time (moved into too much shade under the mountain laurel last year), replaced a woody prostrate rosemary with a Forester upright, and added batface cuphea, coneflowers (some moved), purple umbrella plant (Trachellium ceerueleum), a few more of the golden groundsel (Packera obovata) for next year early flowers, and a ‘Powis Castle’ artemesia against the existing fall-blooming Mexican mint marigold. Out of view is a long-term Mexican oregano, whose summer-to-fall lavender flowers attract nectaring insects and hummingbirds. The gap is a placeholder for the Gulf penstemons that I’ll move in fall from where they seeded in the lettuce bed. They’re so tough that I could probably move them now, but I hate to uproot a plant this close to overbearing heat. Under the mountain laurel are new columbines. 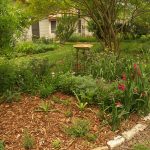 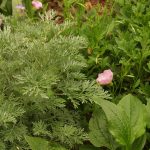 And the Gulf penstemon against Byzantine gladiolus. Generally, you have to order these heirloom bulbs online. They naturalize and return every April. I adore them.

Here’s Penstemon cobaea against white Salvia greggii; ‘Country Girl’ mums (soft pink flowers in fall and sometimes in spring) in the foreground. I need to pinch them back, a monthly task until July. 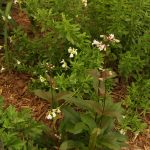 Here’s a view to the cat perch, with asters, primrose, and the glads. You can see a little bit of Knock Out in the middle of the rambunctious primrose, and ‘Hot Lips’ is fluffing out there as well. 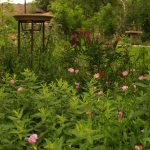 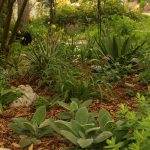 In front of the mountain laurel, there’s evening primrose, candytuft, and ‘Starry Eyes’ nierembegia. ‘Hot Lips’ is just behind them. Along here, there are also garlic chives, oregano, winecup, orange bulbine, August-blooming rain lilies, remnants of spring bulbs, and various coreopsis. I recently added the variegated allium we mentioned on CTG, and now I want more! It’s a beautiful highlight under the mountain laurel’s branches in morning and evening shade, but gets afternoon sun, which I hope will be enough. 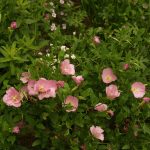 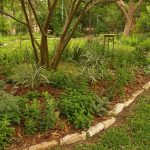 Here’s a close-up of Dicliptera with the Dianella. The Dicliptera has grown so fast that I’ve been clipping it every week to encourage branching. I can’t wait to see if it brings on its touted red-orange flowers for the hummingbirds. 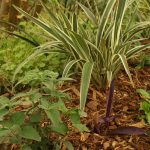 So, I’ve bared my soul. You can see that this isn’t a fancy garden, but by the time you read this, the color wheel will have turned. That’s why we like it. Like Texas weather, it’s never static for long. Until next week, Linda