If you’ve never thought about planting daylilies, you’ll change your mind when you see this week’s video tour! Rich Rosen and Anna Marie Pavlik were Minnesota transplants who grew roses for many years. Then they discovered daylilies. You can meet Rich in person and see and buy outstanding daylilies, suited for Central Texas, at the Austin Daylily Society Show & Sale on May 24. Rich will also open his garden to the public on May 26. You can see head-spinning plants, though I love my reliable yellow. It came listed as Yellow Daylily, so there you go on botanical names. I’ve divided it countless times, and they’re happy in the part sun, mostly shade they get.

A few years ago, I divided some for each side of the cat cove rose arbor. Patiently I waited, and now both sides are blooming nicely. 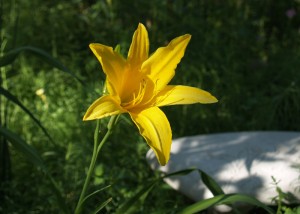 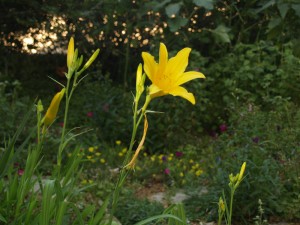 As Rich will tell you, you want the evergreen varieties, which these are. I like them for their upright foliage all year round, with bonus flowers for about two months in late spring. I planted the cat cove ones, along with spurias and hymenocallis (summer bloomers) to sort of hide the blank spaces at the bottom of the climbing roses. Rich can set you up with early, mid, and late daylily bloomers for longer flower power. Remember that his garden will also be online on our web site, and then archived under Videos. Tell a friend!

This week, you’ll also get a new look at crepe myrtles with Mark Ney from McIntire’s Garden Center. If you thought of them only as specimen trees, you’ll flip, as Tom and I did, at the miniatures, suitable for a border, small space, or even containers. Here’s one minature, Tightwad. 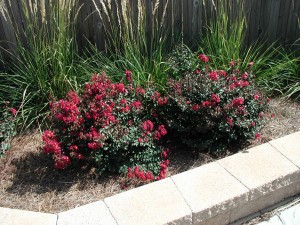 Others are just large enough to form a nice screen along a sunny fence. As always, we’ll have the plant list on our web site. Check out Dr. Carl Whitcomb, who developed many of these smaller varieties, and hear his story. Tom mentions his book Know It and Grow It. I plan to order it online. Also, I thank our viewers who recommended McIntire’s to me.

In my garden this weekend, it’s housekeeping time. I have vowed to keep up with pruning this year. Since my last pictures, everything has filled in completely, and just looks wonderful! In the den bed, here’s Salvia guaranitica ‘Argentine Skies.” 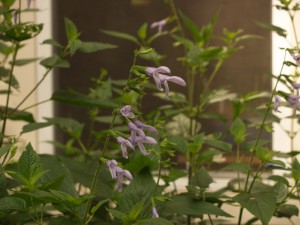 Underneath is Eupatorium greggii. My new lemon balm next to it has exploded. 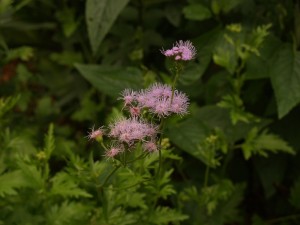 In the rental fence bed, the Salvia guaranitica is starting to bloom. 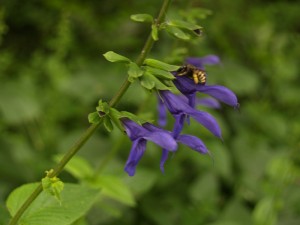 Years ago, this one came to me via my dad, from a friend of his in Dallas, who divided it for me. It’s spread nicely to form a thicket in its shady spot with bits of sun throughout the day. 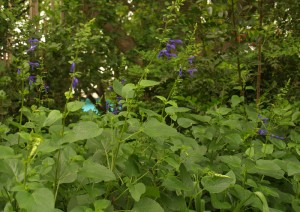 By the way, the rental house has been rented, and the guys want to start a garden! One of them works at Starbucks, and has been leaving me bags of their Grounds for Gardeners for my compost pile. Gentle source of nitrogen. I used to spread my own coffee grounds around the plants, but these days, I just throw them in the compost pile.

Last week we kept an eye on the poppies. Here’s a picture of what I call their “little hats.” 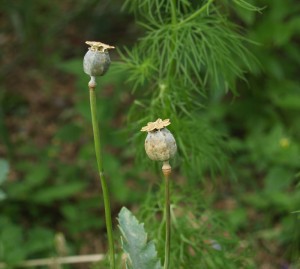 Once they pop up like that, it’s time to get a bowl and the pruners and snip them off. I’ll dry them for a few weeks in the house before I bag them up to plant next fall. Since I’ve mulched these beds, I don’t trust that their tiny seeds will make it until next year. Years ago, a viewer told me that my lack of success with columbines seeding was the mulch. I’m not a botanist, but I can tell you that my columbines tend to seed in blank spaces, not in the mulch, though now and then there’s a surprise. This weekend, I’ll start collecting their seeds too, and cut off their old scapes and some of the spiderworts, which tend to collect snails at the end of their yearly cycle. I keep the spiderwort scapes as long as possible. Then I clip them and put them in an old bucket or sack. Later, I gather the seeds from the bottom. But with spiderworts, I rely on a lot of self-seeding, too. 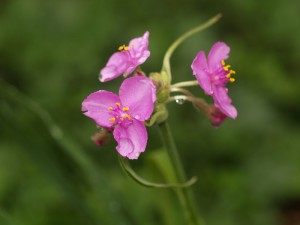 With the warm days and humidity, the patio liriope is doing its job. I came home one day to find two cats asleep in their outdoor “couch.” Here’s Sam Jr. In the foreground is turks cap on the patio edge; in back are daylilies. My success in gardening with pets is to figure out what they want and give it to them. 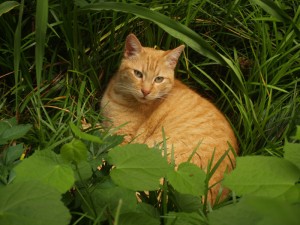 Finally, please pass the word along about CTG’s new blog, to get the conversation and pictures going! It’s always online on our web site, but if you sign up for RSS, you’ll know when the latest comments have been posted. Look forward to hearing from you, Linda