With the cool Sunday morning last weekend, I frantically pruned, weeded, evaluated, and planned. It’s about time to cram in a lot of work after work. Between jotting notes and researching plants, I checked the weather report.

As it clouded over Sunday evening, we put Harvey in his playpen for some fun before the rain started. Greg moved it the day before to distribute the poop. Chester went over to say hello. 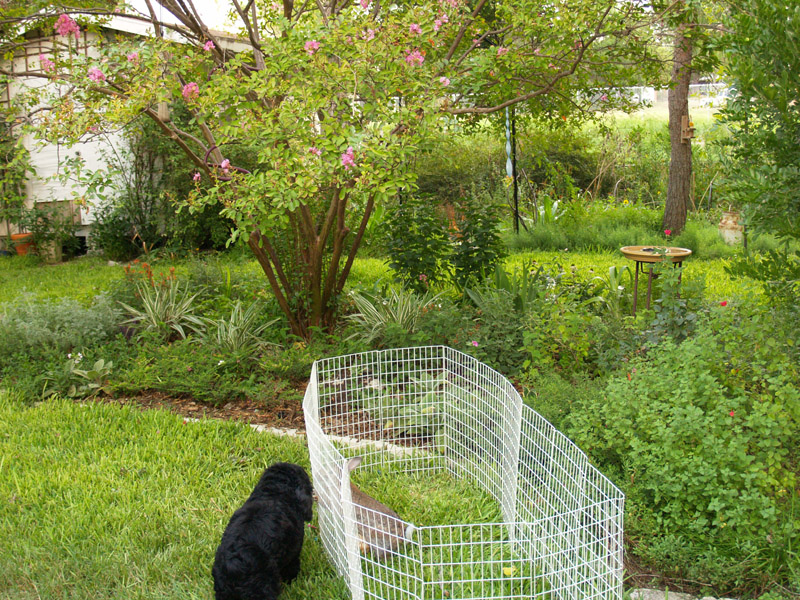 Then the rain spurned us, falling on our Central Texas neighbors, which was good, but the only moisture for us was the tears in my eyes when the sun popped out on Monday. Finally, 1″ arrived in the night, but after all the great promises, it was sort of like expecting a new scooter on Christmas and getting pajamas instead. On Tuesday evening, I held my breath as clouds suddenly wiped the smile off the sun. 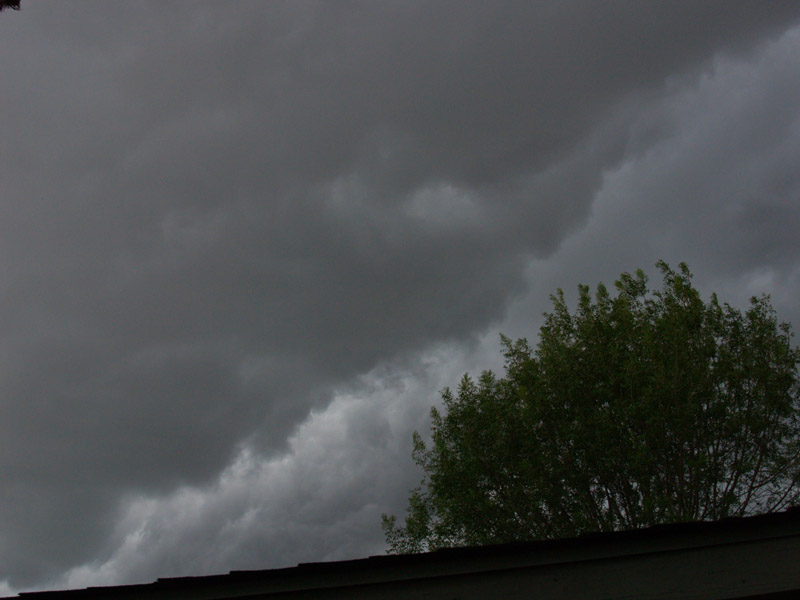 Then came rain again, to renew my hope in Santa and the weather channels. Only 2/10″, but at least I got to see it. 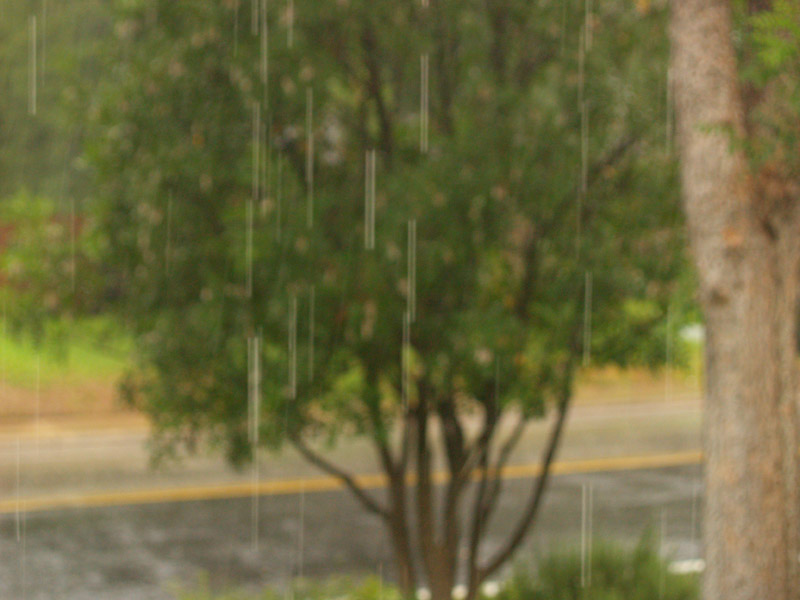 Through these past weeks of drought, a KLRU colleague, Rob, created his own “water collection system,” a true recycle/reuse idea! 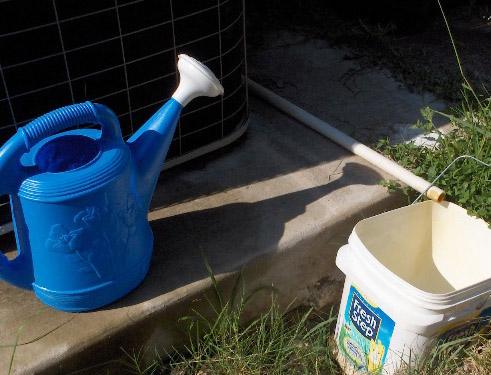 I was surprised to learn that on a summer’s day, we can collect five gallons of water from the AC’s condensation pipe, enough to keep Rob’s first square-foot-garden design going. Thanks for the idea, Rob! 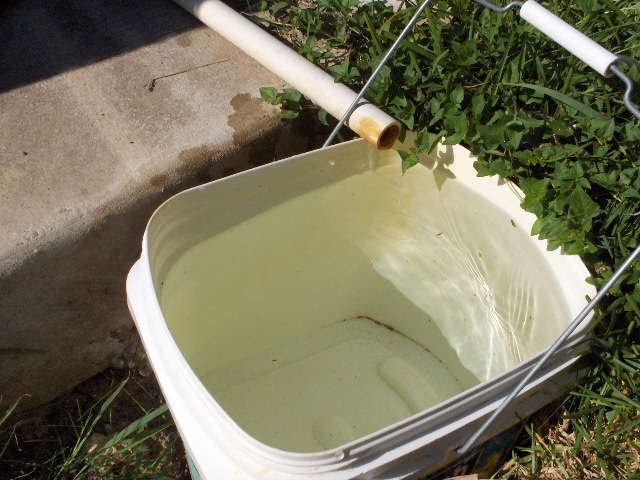 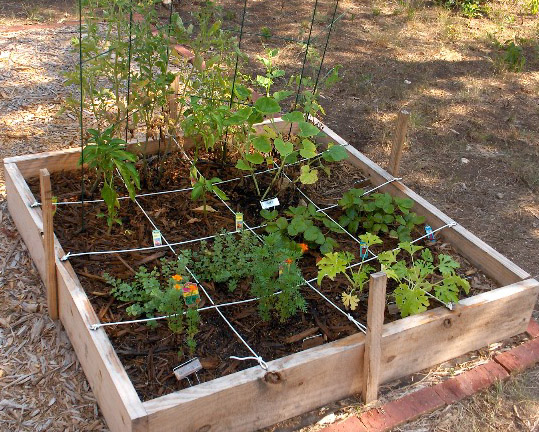 I was also surprised to find this bloom, a runaway from the crepe myrtle, intent on making a thicket. The tree itself lost its luster early this year, but this guy (destined to be dug up) showed me what he could do. I like gutsy plants, so I’ll see if transplanting will work this winter. 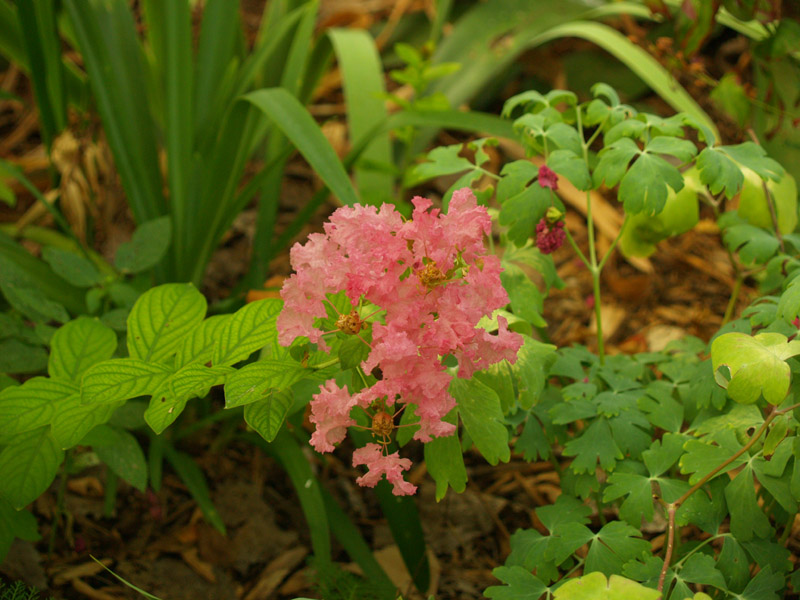 Indoors, we get this surprise every summer (somehow they wander in). If you ever walk into a dark room and see neon lights, it could be this one. My hallway was so dark that I had to use the camera flash, so you can’t see the neon that well, but it’s brighter than a night-light! 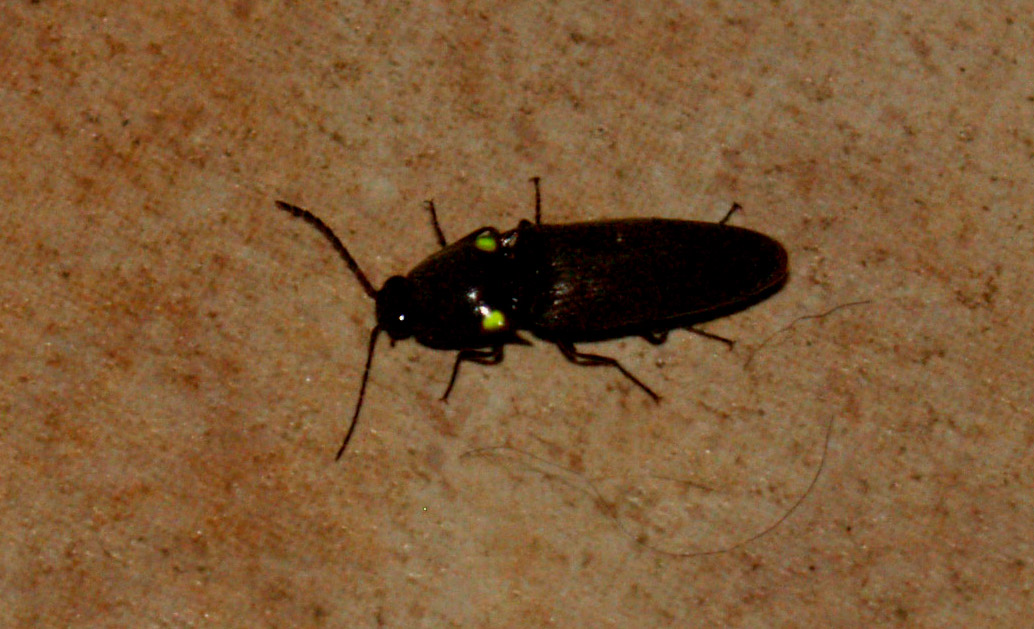 I sucked him up in my bug vacuum and returned him safely outdoors. It’s a click beetle, Pyrophorus noctilucus. One night we saw one climbing a limb outdoors, and in the dark, it was like a light show. The larvae are wireworms, which are somewhat destructive, but I figure a few of them are okay, since the adults are as fun as lightening bugs (beetles).

Not so neon, but still a bright light in summer, are the ornamental peppers that seeded a pot. Soon they’ll be orange and red, and they do rather glow in the dark. 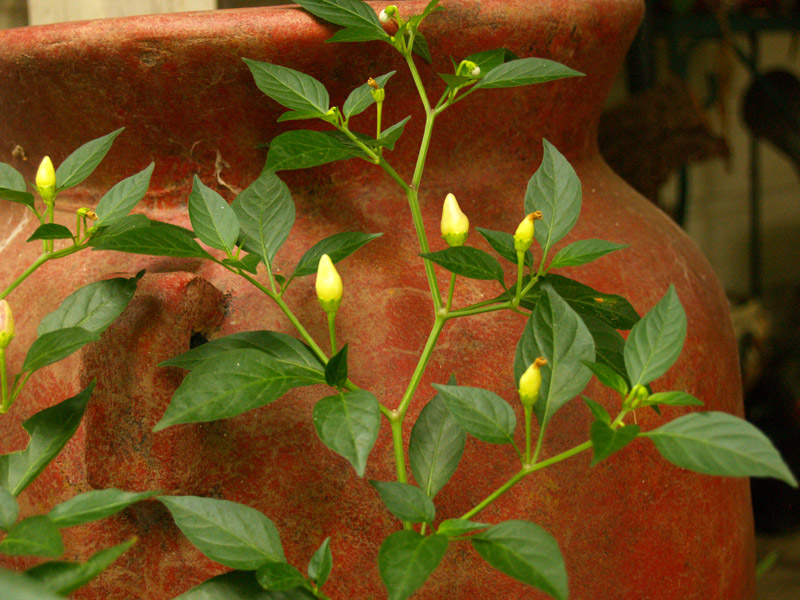 Another glow-in-the-dark is a few blooms from one Tecoma stans (Esperanza) along Amelia’s fence. Since these guys are getting too much shade, they tend to be lanky, as well as late and lackluster in blooms. This fall, I plan to move one to former photinia-ville, and the other near the hot-spot tithonia. 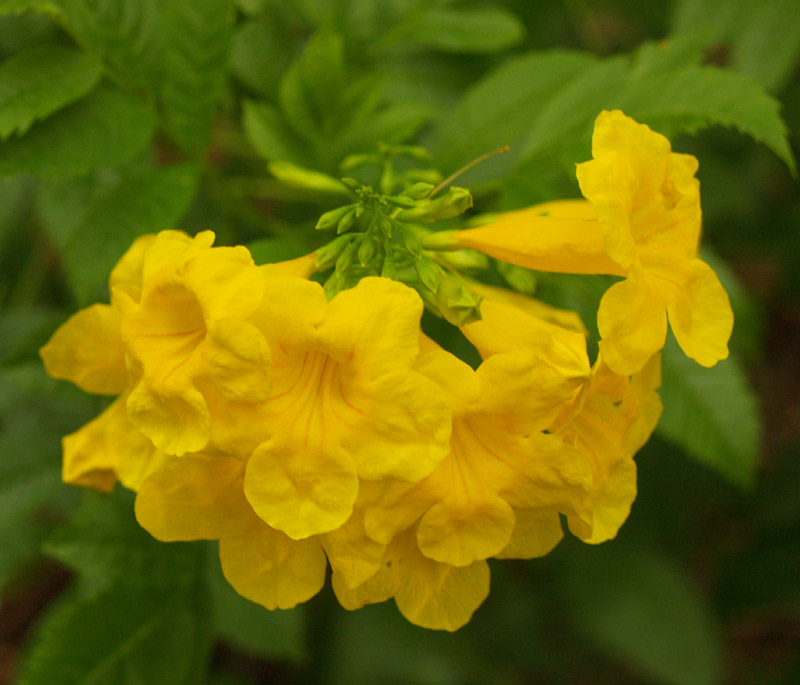 The shrimp plant near kiddie pool is happy with its dappled shade. 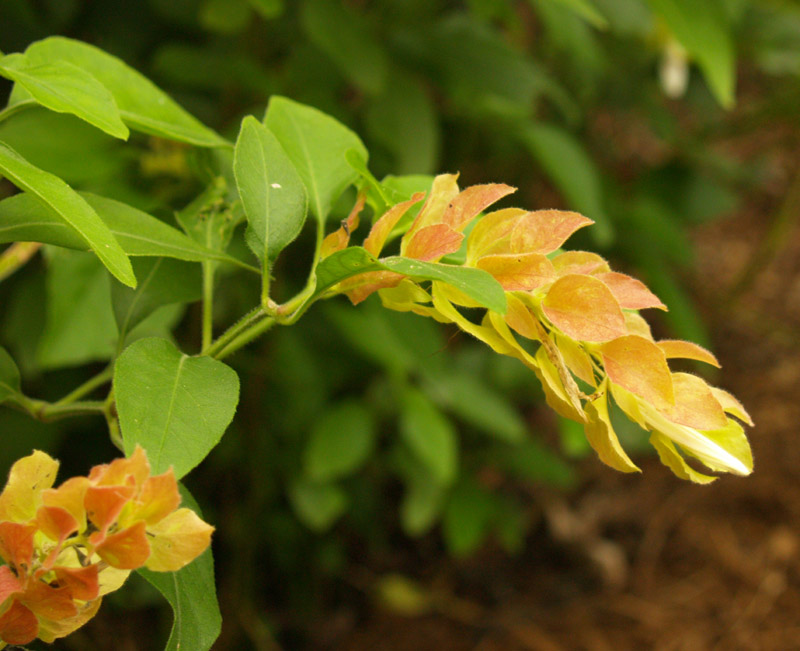 Even at night, I can spot this clump of ruellia against the shed’s entrance. So far, it stays inside its boundaries. If it casts its seeds into the lawn, they get mowed down. 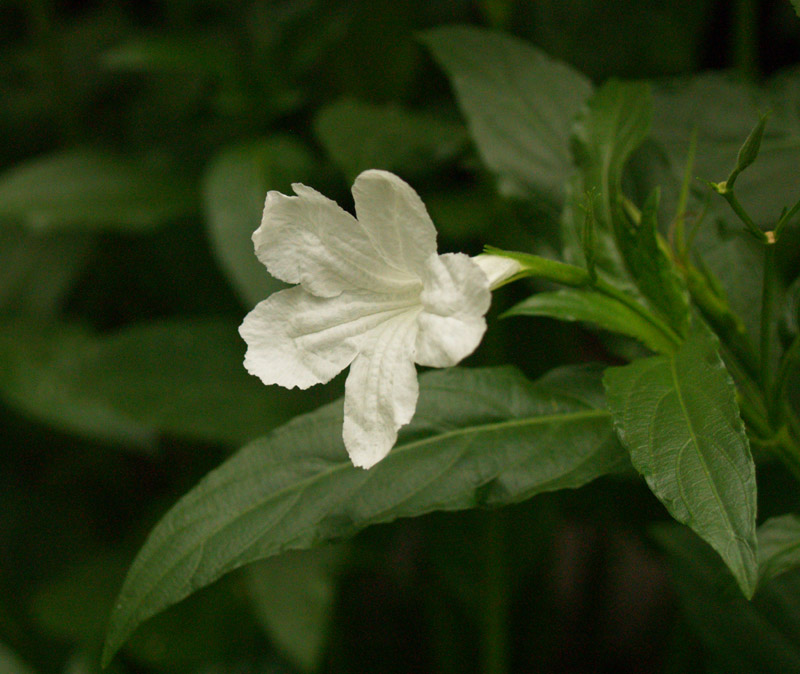 This passionvine flower doesn’t glow at night, but its intense fragrance makes it easy to find at any hour. 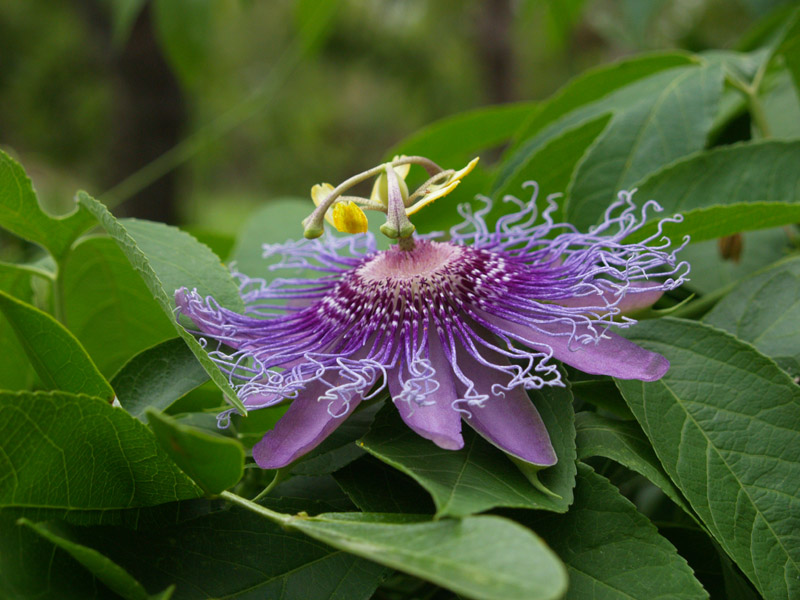 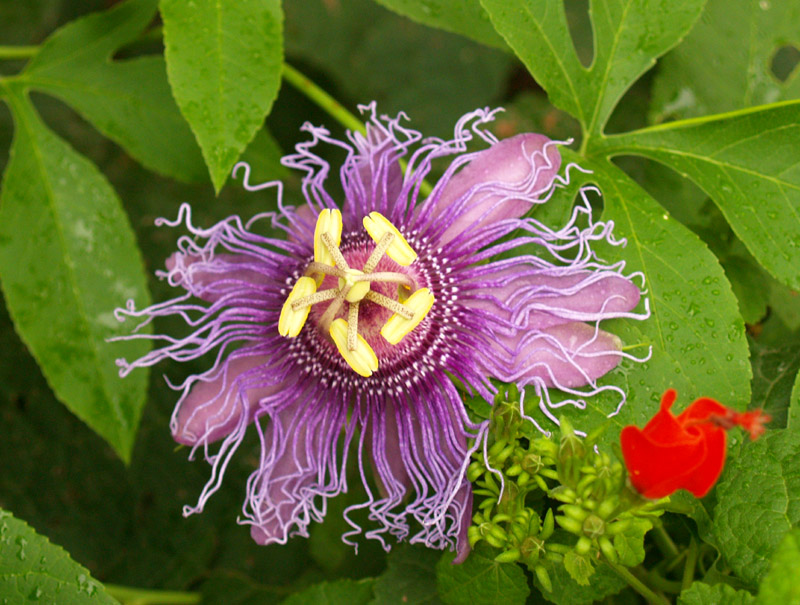 Soon, we enter “boot camp for gardeners,” since September starts our busy season, even if it’s usually hot as heck. And, starting next week, we’ll have a new season of CTG for you, to help you through the busy times.