Whenever I get disheartened about this heat and drought, I think of 1925 with its similar conditions. I can dive into kiddie pool in a skimpy swimsuit (by their standards), sleep in air conditioning, grab ice cubes from the refrigerator, and cook on a stove that doesn’t radiate that much heat. And when I water my plants, I can simply turn on a faucet. Sure, this means a bigger “carbon footprint” than our ancestors’, but I’m thankful for the comfort, which I’m sure they would have liked too. Still, remembering them, it’s hard to whine too much.

I also like to remember when Jill Nokes was on CTG one time and commented about August. I can’t remember her poetic words, but what stuck with me is her encouragement that “things don’t look great, so just accept it.” But since we’ve had two months of late summer heat so far, this month is already wearing thin!

It doesn’t seem to deter leaf-footed bugs (or some bug in the order Hemiptera). I didn’t kill this nymph, since it’s encouraging to see any birth right now, and I figure someone out there needs the food. 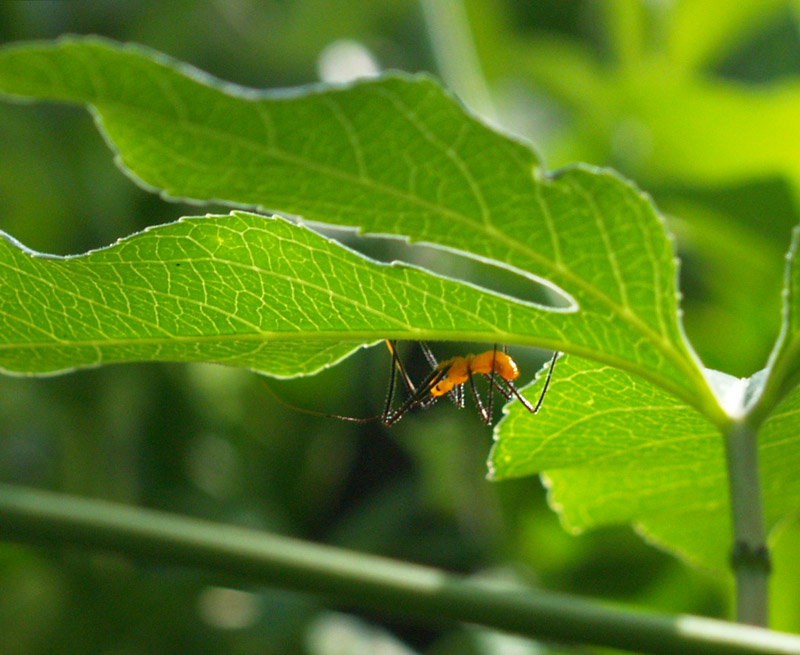 The wedelia, as always, has no problem with any of this. I thank the gardener long ago who turned me onto this groundcover that accepts shade and its blasts of sun. 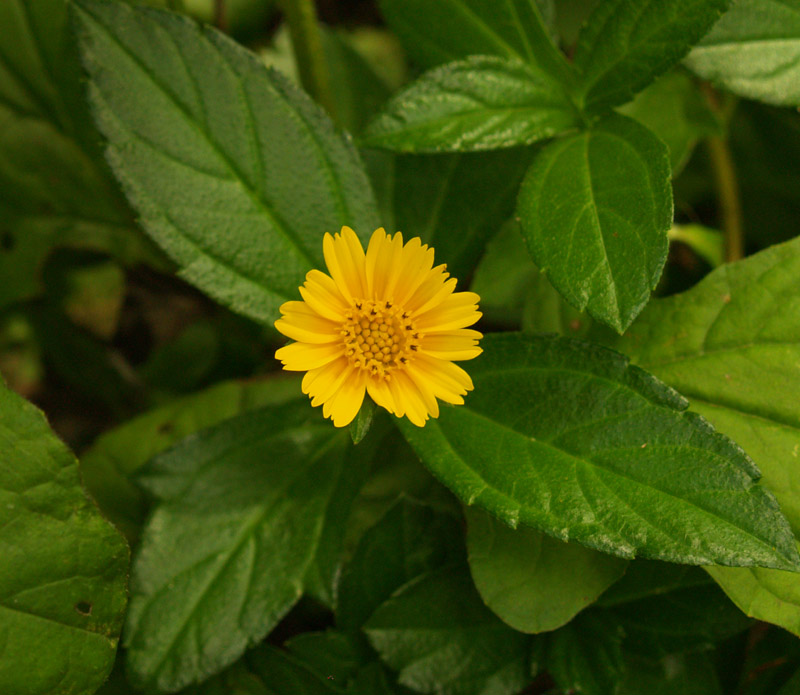 I also thank the person who told me about pigeonberry as a shade plant. Frankly, it’s not the most spectacular sight unless you plant lots, but mine have been through every drought and freeze for many years. 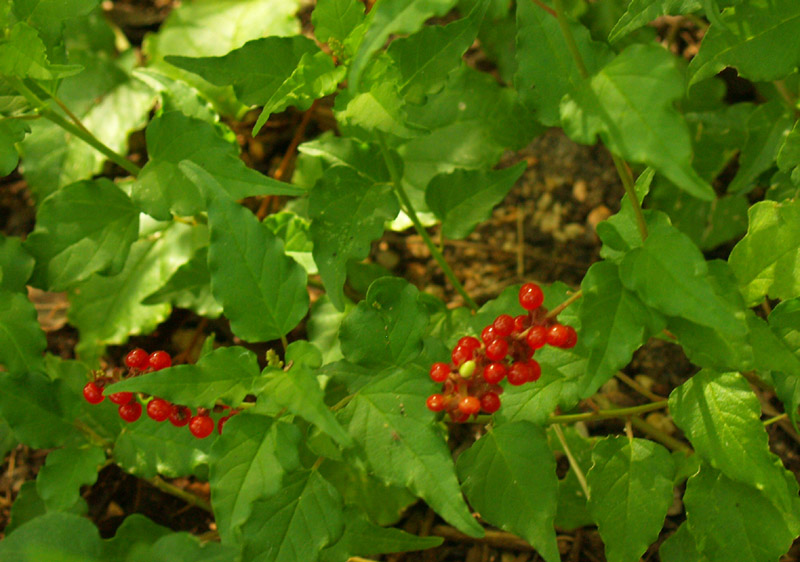 Long ago, I planted two butter and eggs (Linaria vulgaris) or common toadflax, along the back fence. I can see why some may call it vulgar, since it tends to take over. But I rather like its no-care froth of green, and its sweet little flowers against the lantana. And it’s easy to pull up when it threatens its neighbors. That’s the milk can I found in the metal recycling pile at my car mechanic’s! 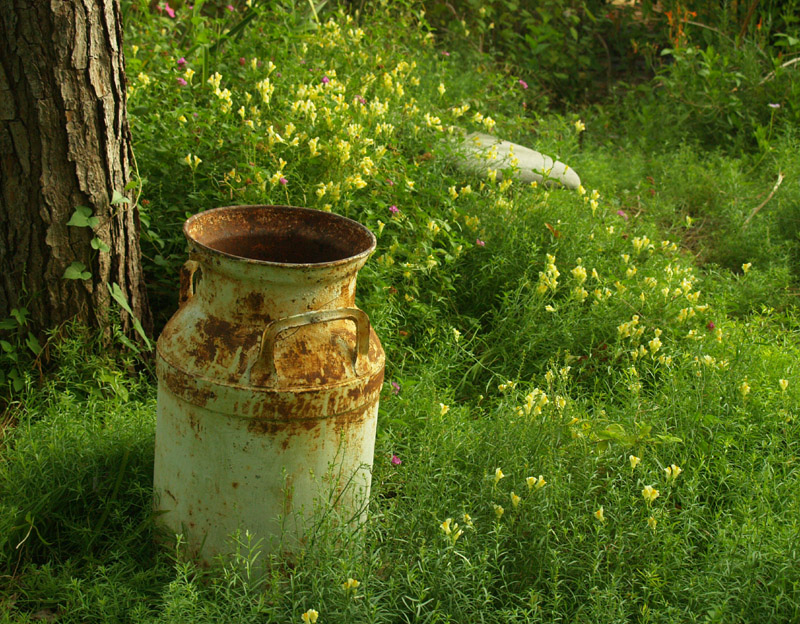 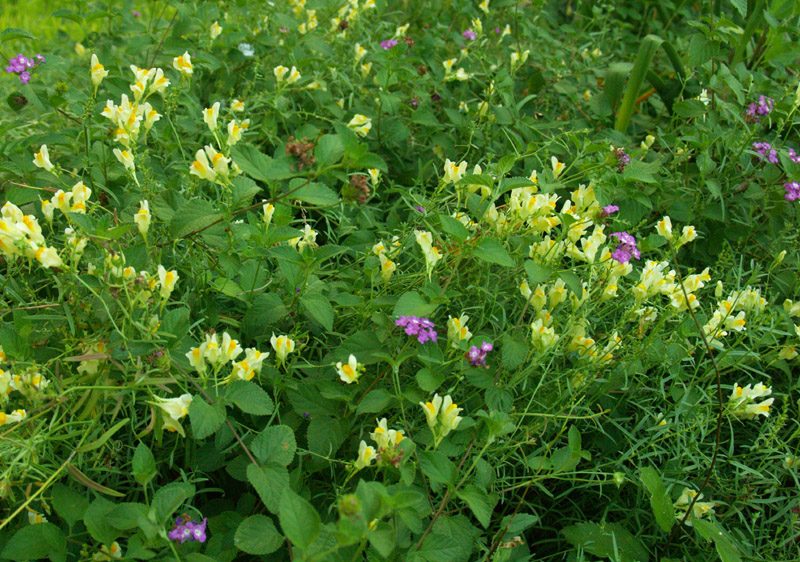 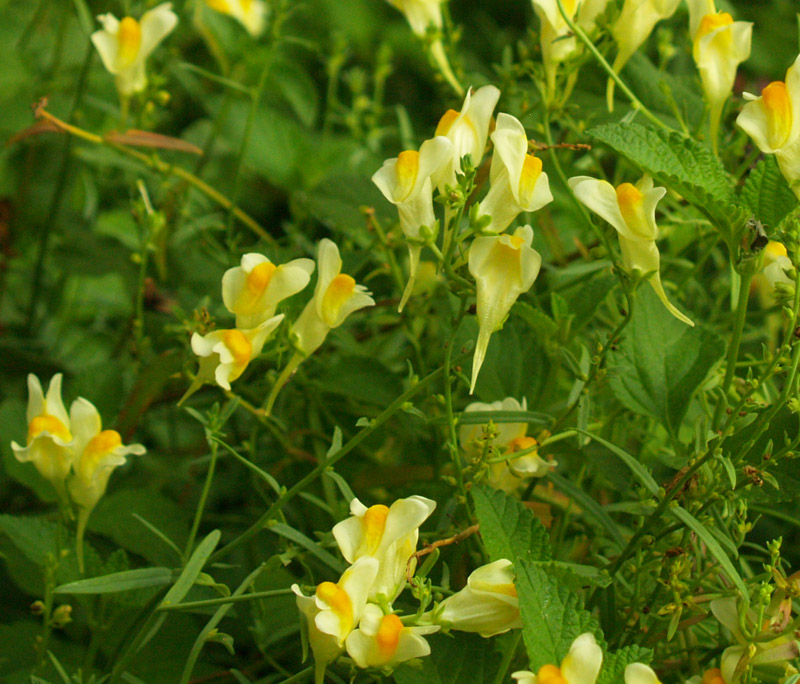 On sulfur (sulphur), Greg tells me that when his parents built a house in the 70s, his dad spread it to eradicate the ticks. It seems like it’s doing a good job on the chiggers. Trisha Shirey recommends soil sulphur as opposed to the dusting type, which sticks to the ground better (which I can attest) and lasts longer.

To show what the heat has done to our brains, we got Harvey a little bunny harness with springy leash for hops around the yard. He loves it! 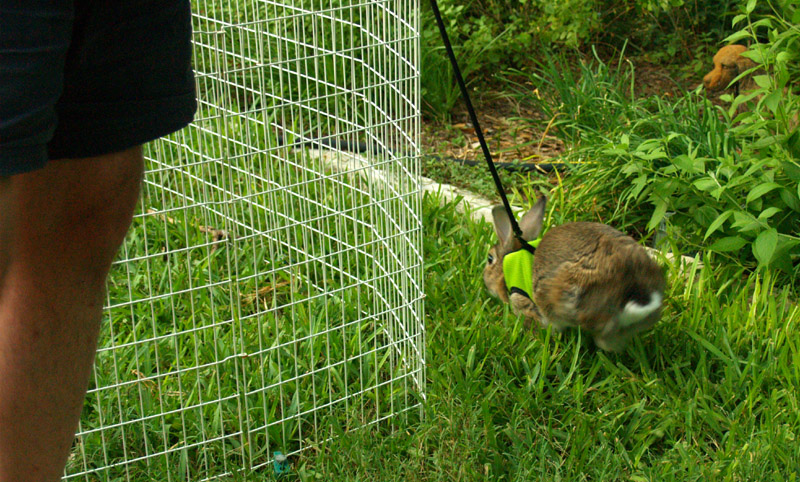 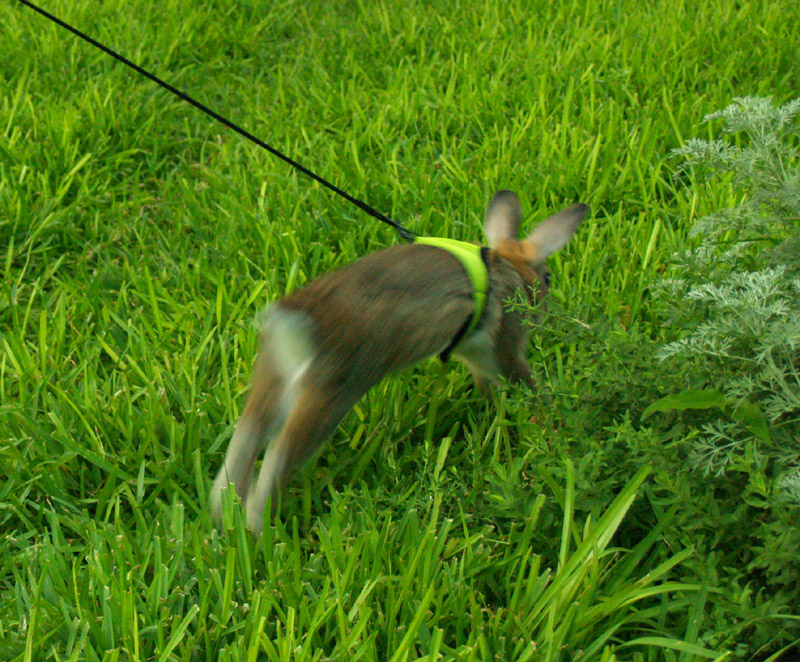 I’m getting some free pruning and free treats for him. He’s very discriminating about what he eats, but he loves the toadflax! 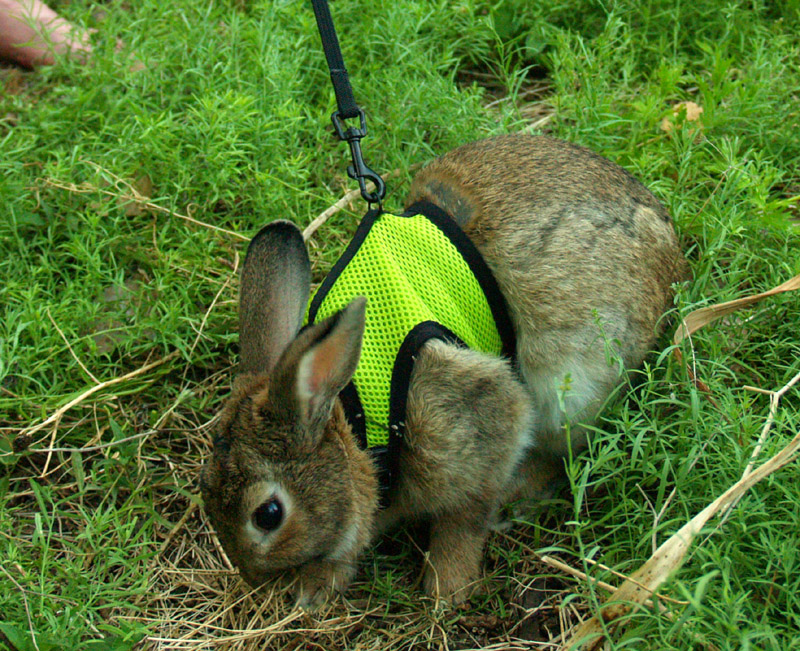 He’s also a new critic. If Harvey doesn’t like something, he chomps it down and tosses it out of the way. I suspect he reads garden design magazines while I’m at work. 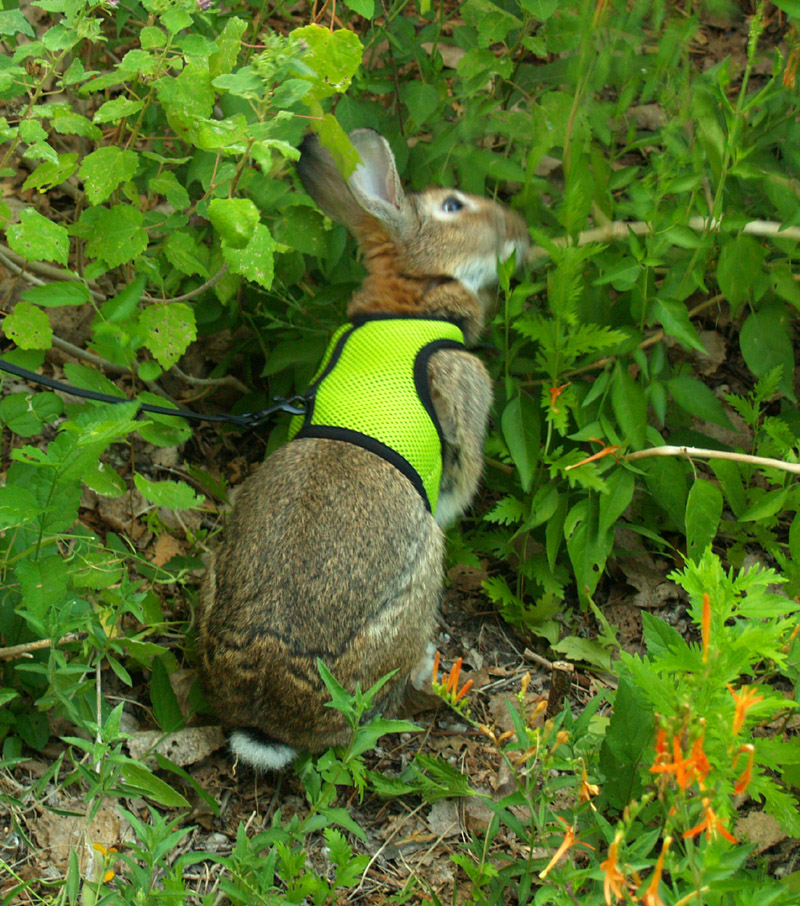 That’s the end of the tale for now, so I’ll see you next week! Linda 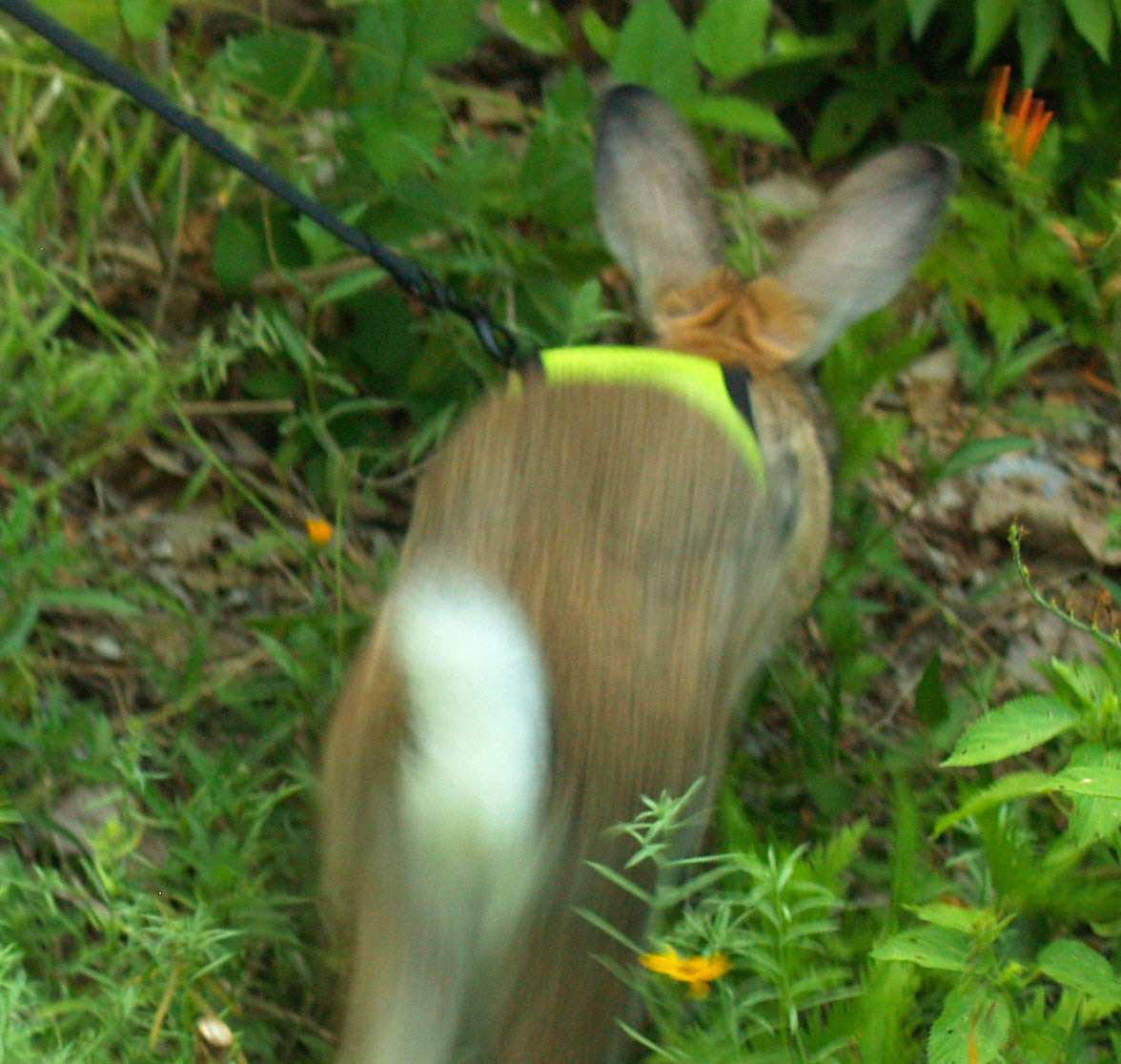