This year, we’ve run through a lot of weather on steroids: flooding rain, hail, drought, extended heat. Like me, I’m sure you’re taking a good look at the garden to see who battled it all and came out on top.

This week on CTG, Matt Welch from The Great Outdoors puts it all into perspective, with prehistoric plants that have been around since dinosaurs munched along our highways. To see more of Matt’s survivors for contemporary gardens, visit his designs to complement Zilker Botanical Garden’s touring exhibit, DinoLand, which opens this weekend. Through November 30, look up and wonder at your neighbors from long ago. 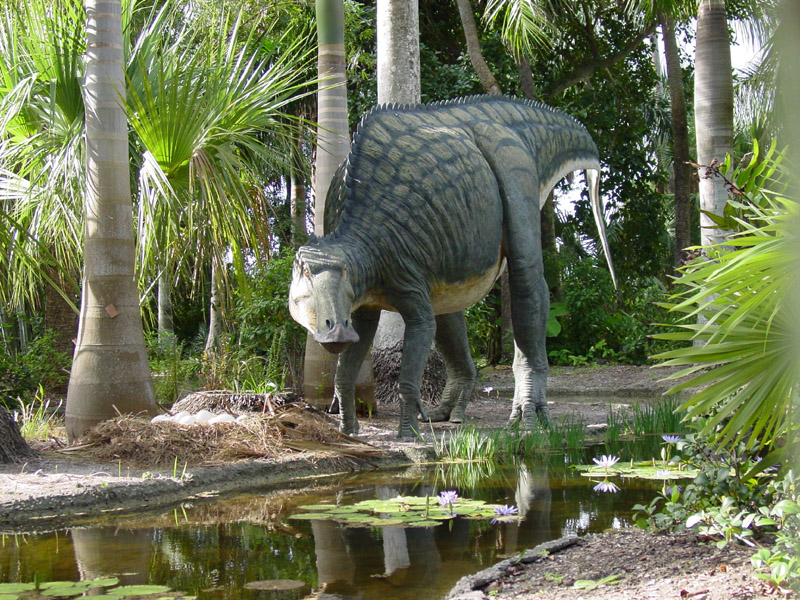 On tour, we visit friends who pass along their plants, formulas for success, and design techniques at a Las Comadres garden get-together. They invite you to their next garden visit on September 13. Once you see them in action on video, you will want to meet them in person!

In our garden, we bid goodbye to an old friend, an Afghan pine we planted when it was a foot tall. 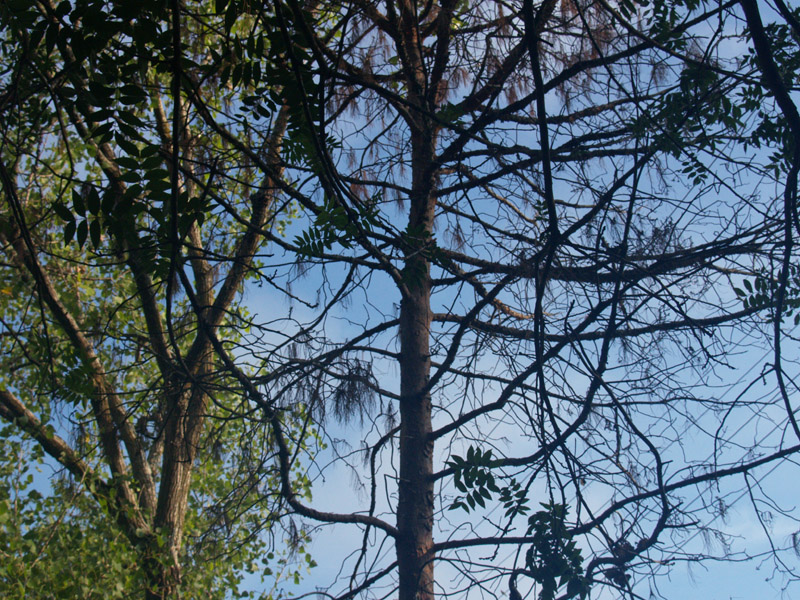 Years ago, when we volunteered for Christmas tree recycling, we handed out seedlings. They were part of the city’s plan to repopulate Austin’s trees with a drought tolerant evergreen. Sadly, it turned out that Central Texas was too wet for them. Ours lasted longer than most, since it didn’t get much water, but last year’s rain, and possibly insects, ended its career near our back fence. 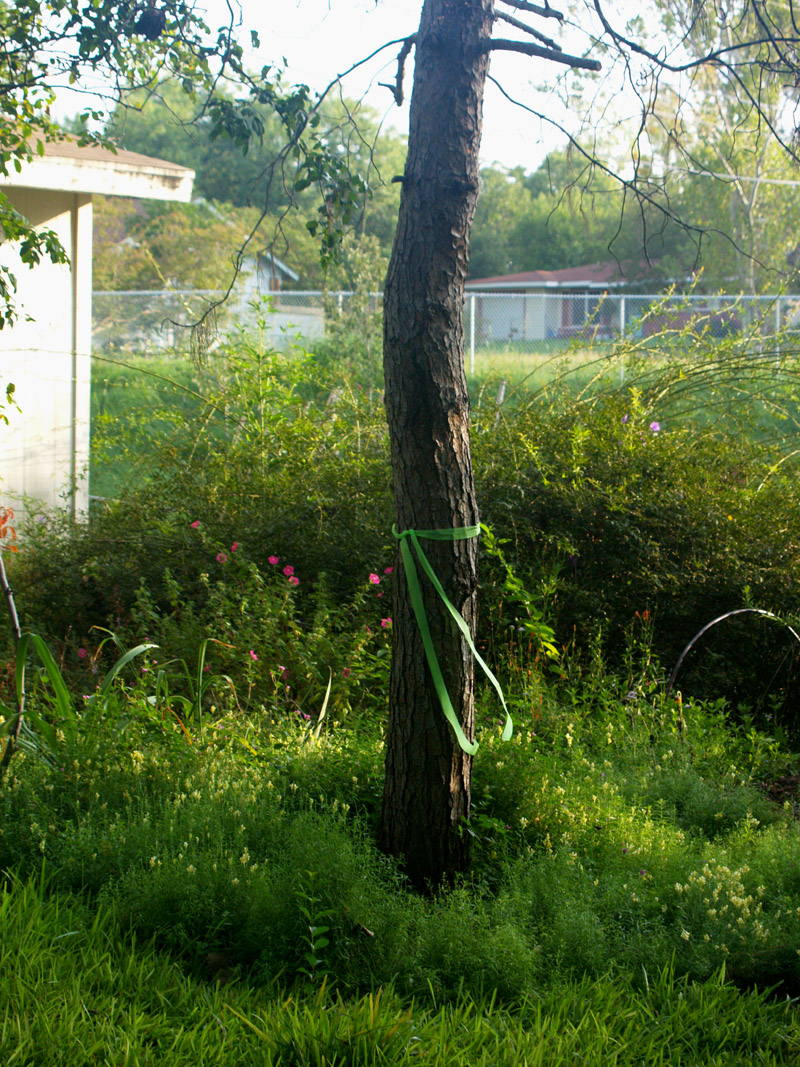 But it, like every plant, is an experiment, and we loved our years with it. The nearby cottonwood we inherited with the house was also an experiment 40 years ago. Next year, it will be on the chopping block, too, before it chops down our roof.

With the cottonwood’s decline, the Afghan gone, and the trees razed in the creek, this returns the back fence to sun, reversing its shady situation from just a year ago. Now, I’m eyeing options for tomatoes next year. In the meantime, the lettuce bed is cleared, composted, and fertilized, to settle in for a few weeks until things cool off a bit. At that time, I’ll move the penstemons and compost their vacated space for successive plantings through the fall.

Just about year-round, though, we can harvest garlic chives, now in bloom in the crepe bed. 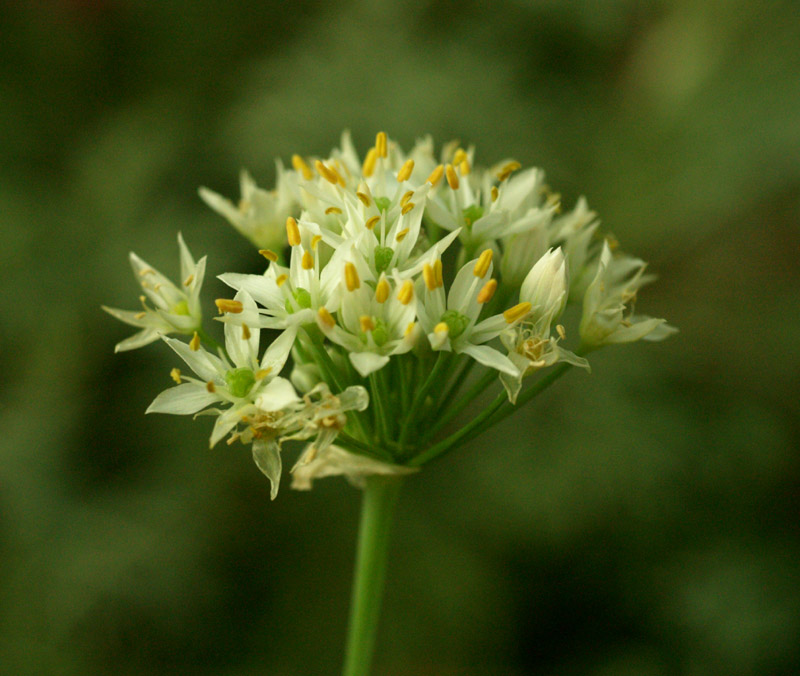 Years ago, a dear gardener dug up a clump for me, which spread as readily as his kindness. I plan to scatter their seeds along the creek bank. 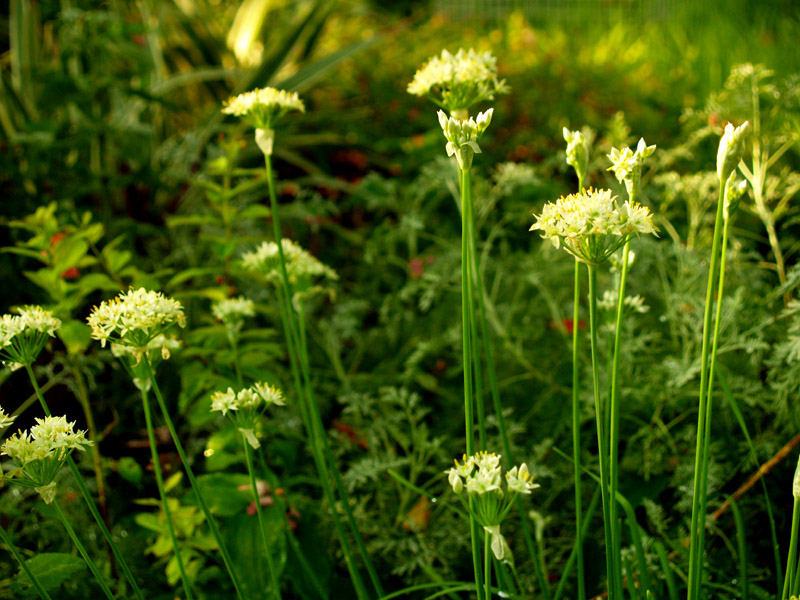 Here’s another passalong: Tradescantia albiflora or fluminensis. It is highly invasive, but that works well when you want fast groundcover in shade (though it takes some sun, too). Last spring, I stuck a few cuttings in the patio bed, where it’s carpeting the taller gingers. Just a few sprigs soon covered a lot of blank space. Here’s one with the new dwarf spotted aspidistra (Aspidistra elatior). 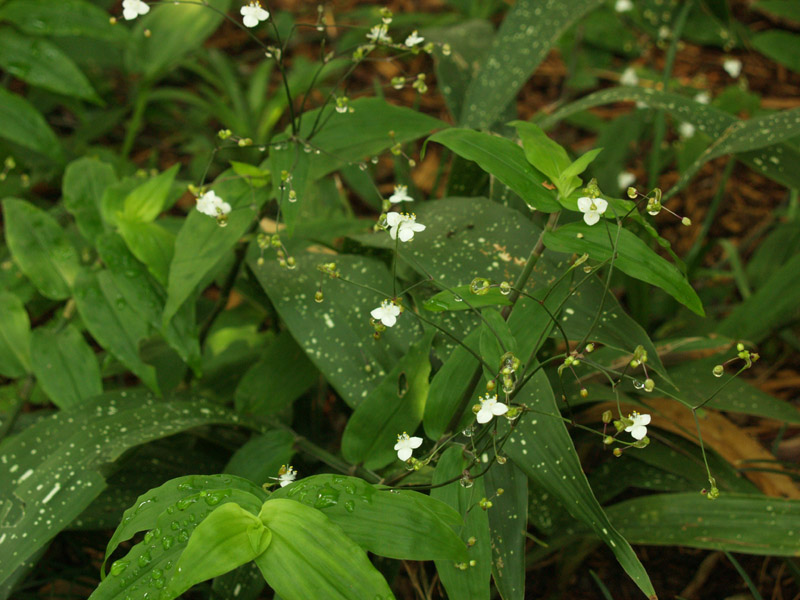 But I’ve also thrown it everywhere, like behind the air conditioner. I don’t bother to dig a hole. I just scrabble away the mulch, lay it down, and off it goes. It survives on very little water. I have some in the crepe bed, but keep it under control so that it doesn’t suffocate my other treasures. I like the glossy narrow leaves for texture, and when it blooms, it’s like a cloud of baby’s breath. I first saw it on a cloudy day and was in love. 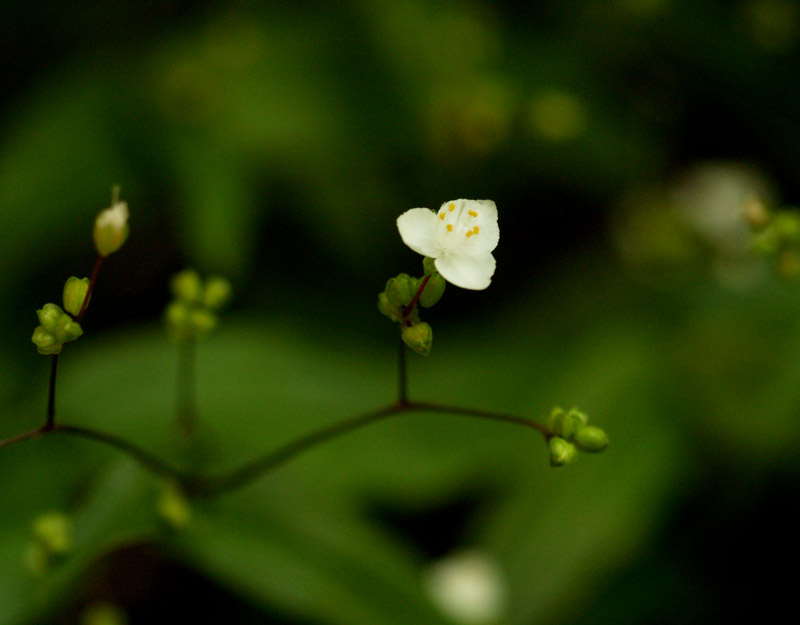 The foliage dies back in winter, but returns quickly. A few years ago, I got a hanging basket at an end-of-the-season nursery sale. I kept it in our patio “greenhouse” for cuttings. It’s become a beautiful summer basket, and sometimes blooms on frosty days in its balmy winter headquarters. 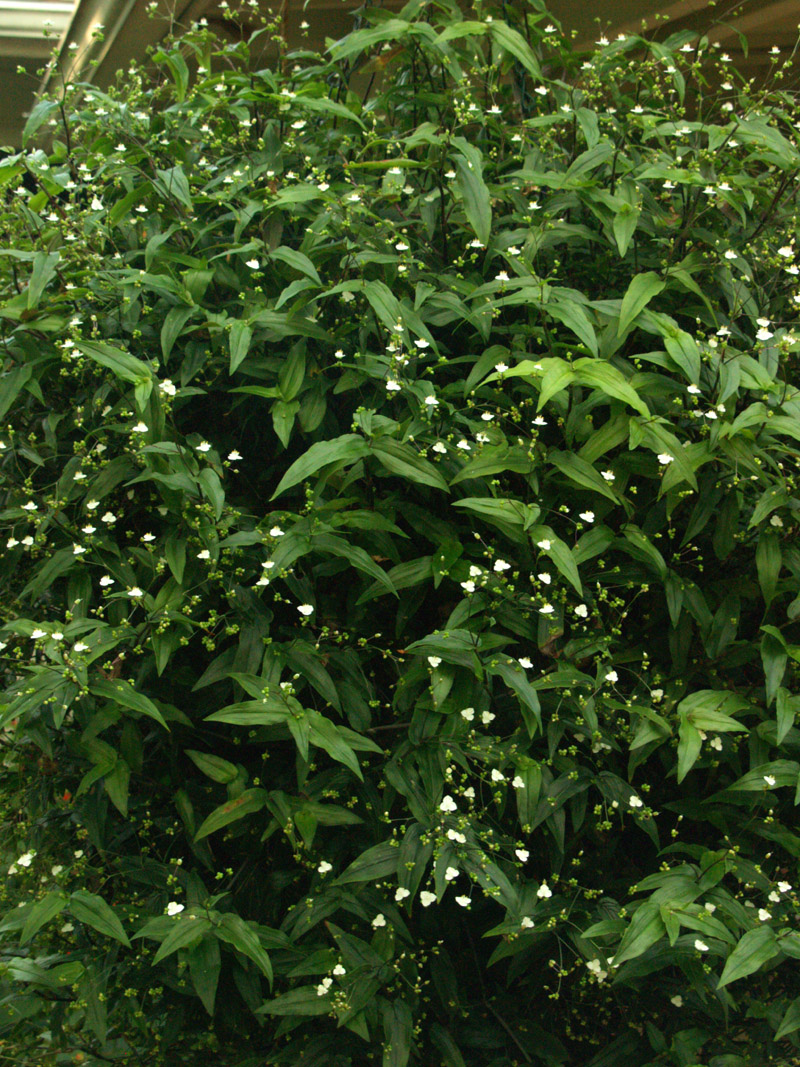 In front, I’m so glad I planted the variegated miscanthus to replace the shaded-out cenizo. It’s held on through heat and drought in its first season, and connects white in semi-shade to the sun-loving grays and whites at the hotter edges. I like it against the purple heart (Setcresea pallida), another passalong from my friend Holly at KLRU. 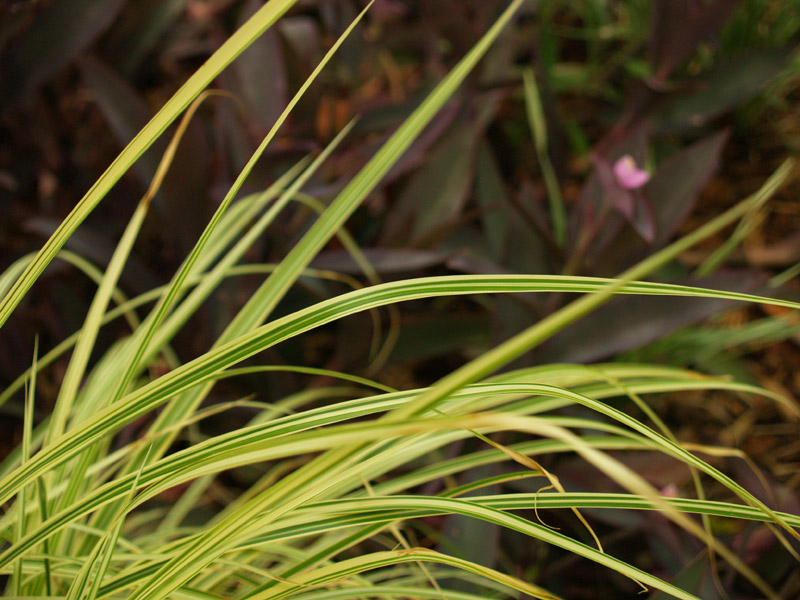 In back, along Amelia’s fence, the Hamelia patens and Salvia ‘Teresa’ are starting to show off, though it’s a spring re-run for ‘Teresa.’ Let’s hope the nearby Salvia leucantha joins them in a few weeks. It wants more sun, which it had when I planted it for this ensemble. 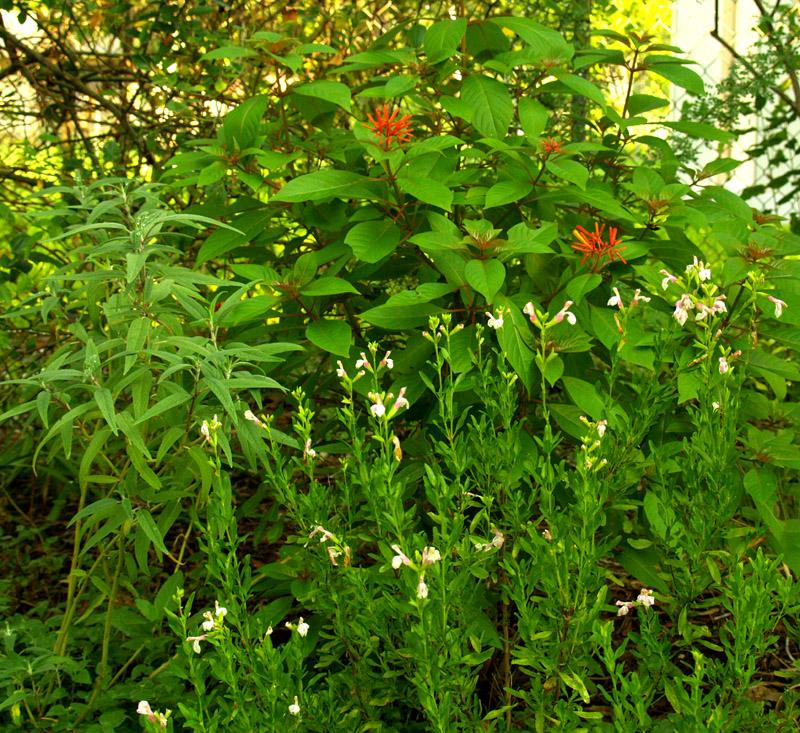 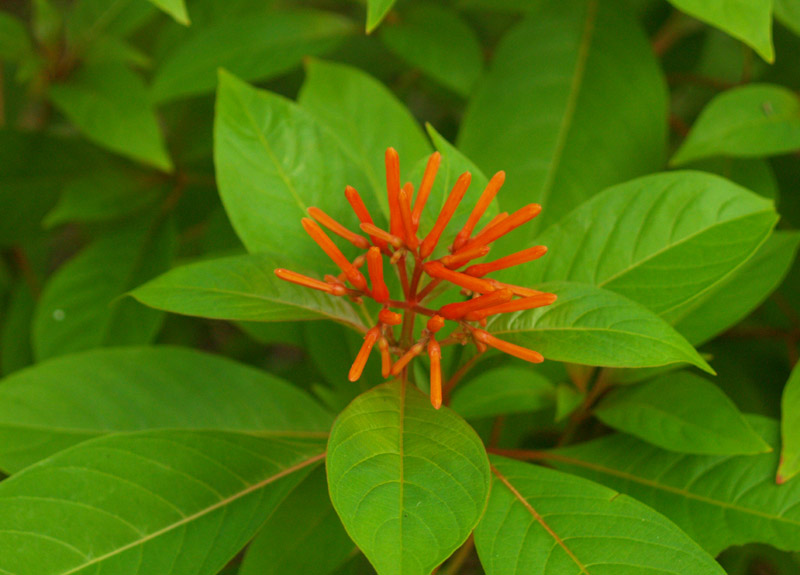 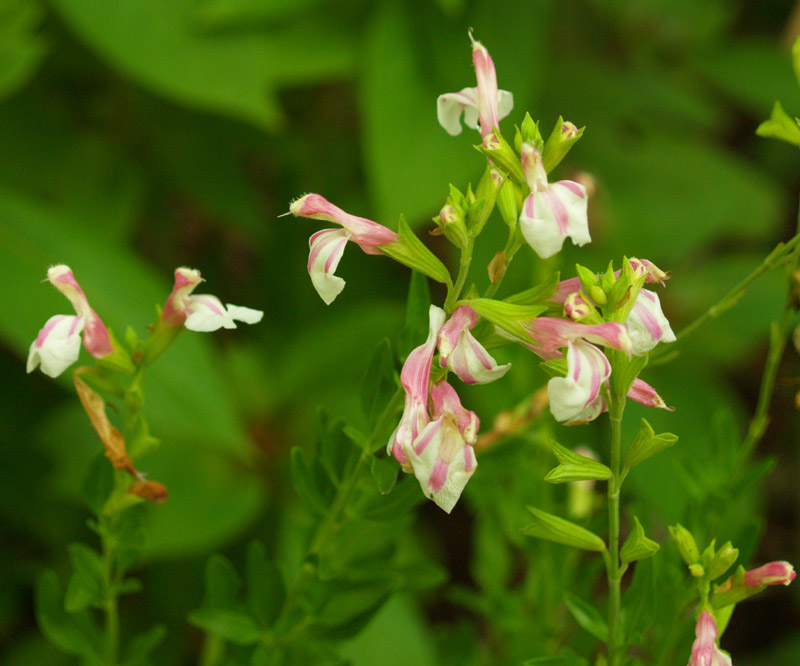 A garden’s dynamics are always changing: sun to shade and back to sun. Like life in general, I value the experiments and risks that bring me closer to understanding (whatever it is that I want to understand). Changes push me to new perceptions and challenges.

To soften my deep thoughts, Harvey’s only philosophy is to get the ball rolling for his own bunny garden. 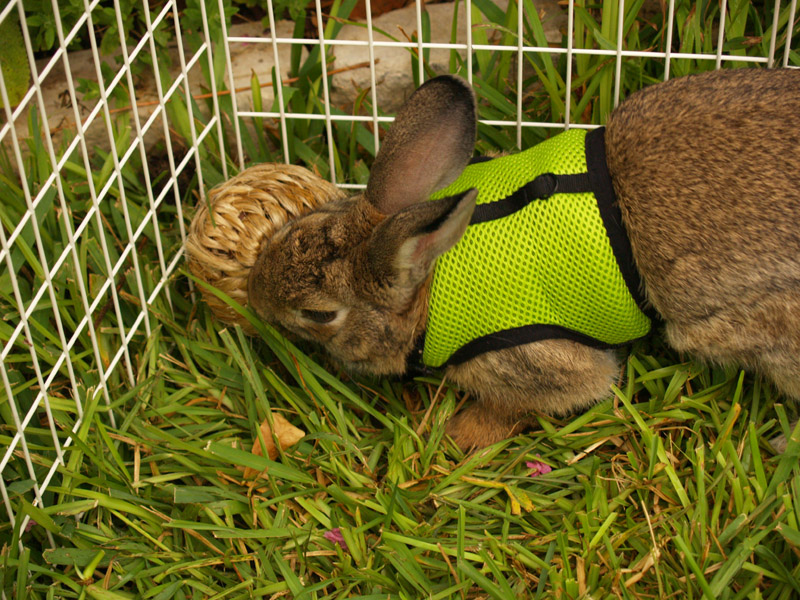 So, I composted and fertilized the tithonia bed, working around its flowering stalks, which currently feed the butterflies. In a few months, when they’re frozen to the ground (but leaving their seeds for next year), the bed will help feed Harvey with a few organic treats from his own winter salad bar.

Next week, CTG has ideas for your vegetable garden, so until then, Linda