If you’ve ever been to a progressive dinner, you know what pruning is like for the next six weeks or so. I started in late December and will finish by late February, as if “finish” is a word in garden vocabulary!  Like a progressive dinner, the good thing about our pruning tactics is that we don’t have to digest the whole garden in one sitting.

Already I’ve cut back some of the frozen woodies, like the flame acanthus (Anisacanthus wrightii)  With woodies like that, just chop them to stubs. They’ll return with new vigor before you’ve missed them too much. 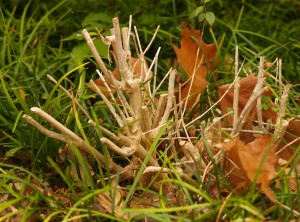 And, the Hamelia patens (Firebush, Hummingbird bush).  Spiderworts liven things up in the meantime. This is where you could also fill in with winter annuals or sow seeds.  In many places, I “understory” with oxalis or bulbs. Just haven’t made it to that section yet! 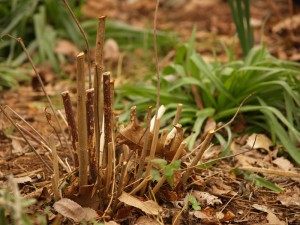 I cut the inland sea oats to the ground, but will leave the other grasses until February.  For one thing, I like the way they look.  Also, last winter Jane Tillman and Cathy Nordstrom from the National Wildlife Federation told CTG that they harbor overwintering butterflies.

This weekend or next, I’ll start on the woody Salvia greggiis, though I couldn’t resist doing a few.  At this time of year, they can stand up to harsh pruning that sponsors flowers on new growth. It’s painful to prune while they’re flowering, I know, but in the next four weeks or so, it’s now or never if you want a fluffy plant filled with flowers this spring, instead of an overly woody look. It’s a good time to pull out rotted wood, too. 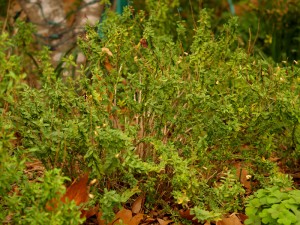 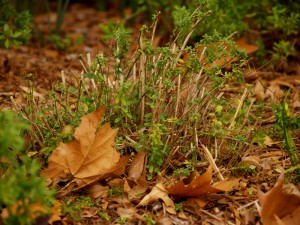 I cut the herbaceous Salvia ‘Indigo Spires’ to the ground a few weeks ago, and it’s already fluffed up. 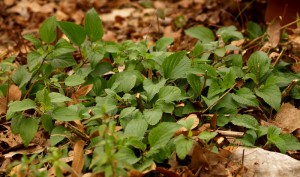 Ditto some of the ‘Country Girl’ mums.  Many were still flowering, so I’ll do another pass to clip the rest of them. In the next few weeks, you can also divide these and other perennials. Just keep them watered, in case of freeze, but it’s a lot easier now than once it warms up for keeps.

Next up will be the Salvia guaraniticas and asters.  In beds I plan to revise this spring, I’ve left a few things so I remember how large a space they fill.

This is the time of year to shape up rosemary.  And if you need to move one, Madalene Hill (Southern Herb Growing) once told me to do it on the coldest day in January.

I pruned back some freeze-damaged plumbago to open things up for bulbs. So much of it is still green that I left the rest for now.

I gently trimmed the silver germanders (Teucrium fruticans) to address their unruly ways. 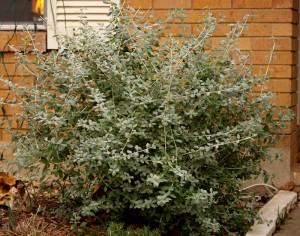 I’ve also been pruning back ‘Powis Castle’ artemesia.  I’m not doing it all at once, in case some horrible freeze is around the corner, but I wanted to clear away some of their floppiness. With the warm days, the cut stalks are already leafing out.  In a few weeks, I’ll give them all a good manicure. I know that a lot of people get disgusted with the germander and artemesias, but a little whacking is all they need.

There’s also a debate about when to prune lantanas and similar herbaceous plants. Some gardeners leave them longer for extra insulation; others want a pristine look right away.  In our temperatures, it usually doesn’t matter, unless we get the killer freeze after days of leaf-encouraging warmth. But in my case, they have to wait their turn in my weekend progression.  Also, many are still blooming. 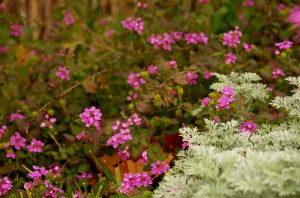 Last Saturday when we hit the 80s, butterflies zeroed in on them, as well as on the thistles I let bloom for that very purpose (a few bees showed up, too).  I temper my zealous clean-up inclinations with respect for winter wildlife dining.

Roses, the Mexican oregano, the shrimp plant, and many others get their chance in mid-February.

Spring bloomers wait, though I don’t mind sacrificing a few flowers if I need to tidy up exuberant growth.

The only thing that simply must be done now is to prune and paint oaks that are susceptible to oak wilt.   It’s also a good time to prune your other trees while you can clearly see the structure.

See how John Dromgoole and Lyda Guz from The Natural Gardener prune a few things for CTG’s camera.

This week on CTG, get your garden off to a good start in 2009 with tips from Dick Pierce from the Austin Permaculture Guild. His techniques promise a healthy, sustainable garden that stands up to Texas torture. Check them out, too, for classes, workshops, and special events. Once you “meet” Dick, you’ll want more, I promise!

On location, if you missed its first broadcast, I’m repeating the green garden renovation designed and installed by local Adams Kirkpatrick and Russell Womack for This Old House. Their ideas are well worth seeing again.