One day late for last week’s post, here’s Maggie, another rose William Welch found in Louisiana.  She’s just down the way from last week’s climber Peggy Martin. “The” rose guy, Dicke Patterson, who brought roses to It’s a Jungle (acclaimed for Juanice Davis’s orchids), gave me this one a few years ago at the Mayfield Park garden symposium when we were loading out the guest speakers.  She’s another trouper. 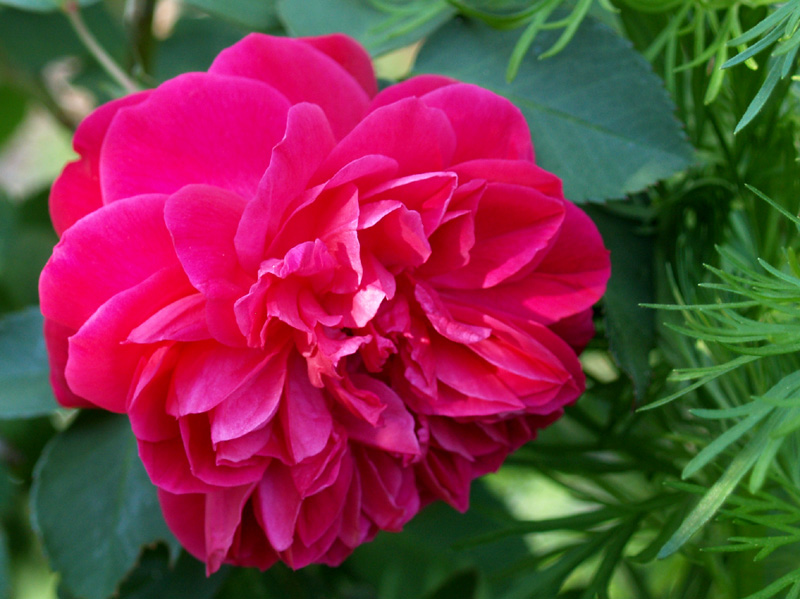 A big surpise: this bearded iris in the crape bed.  In the evening, my camera saw it as more blue than its actual lavender. 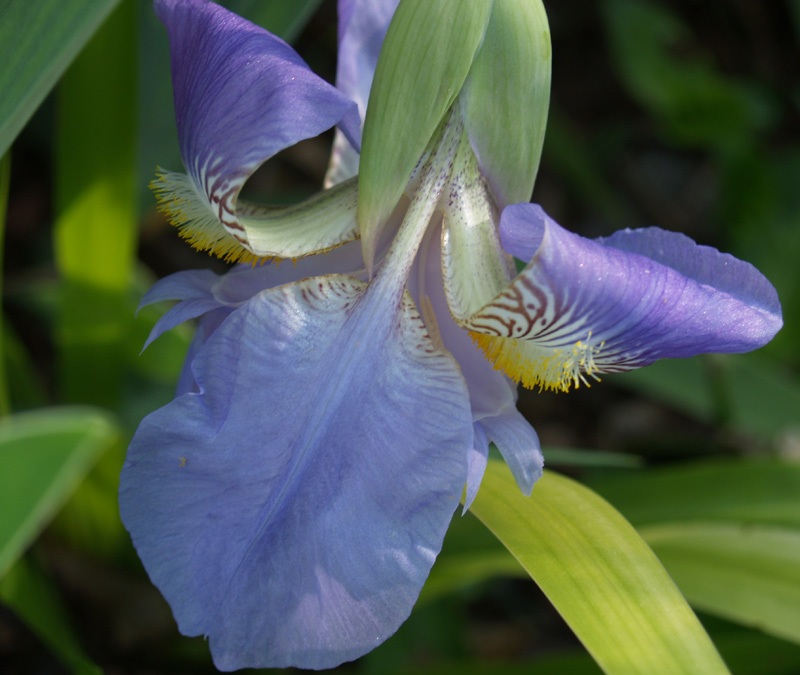 The next morning, it looked closer to its true color, though it’s still not this blue. 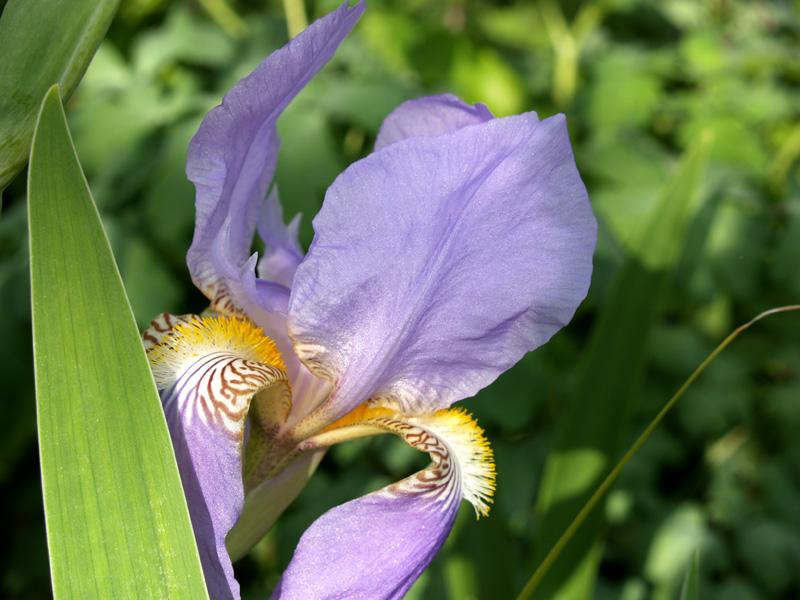 I can’t even remember where I got it or its companions, since it was so long ago.  They started in the rental side when it was sunny, in the first garden bed I made there.  When that turned into shade, I moved them to the sunny crape island bed, but then that spot got a bit too shady, too. Even dividing them and removing the once-flowering mother rhizome doesn’t help their bloom power, but I’ve kept them for their trusty foliage. Beyond is the Agave celsii. 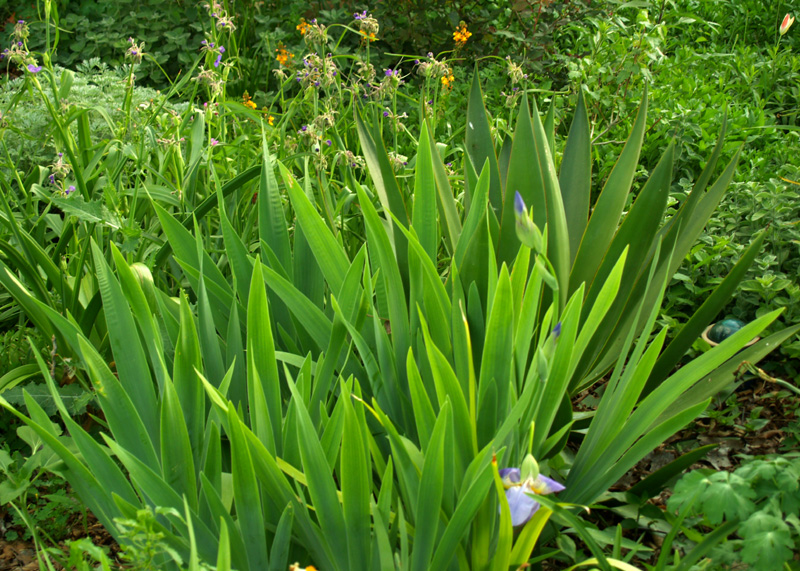 Still, every now and then, they do a little more self-promotion. 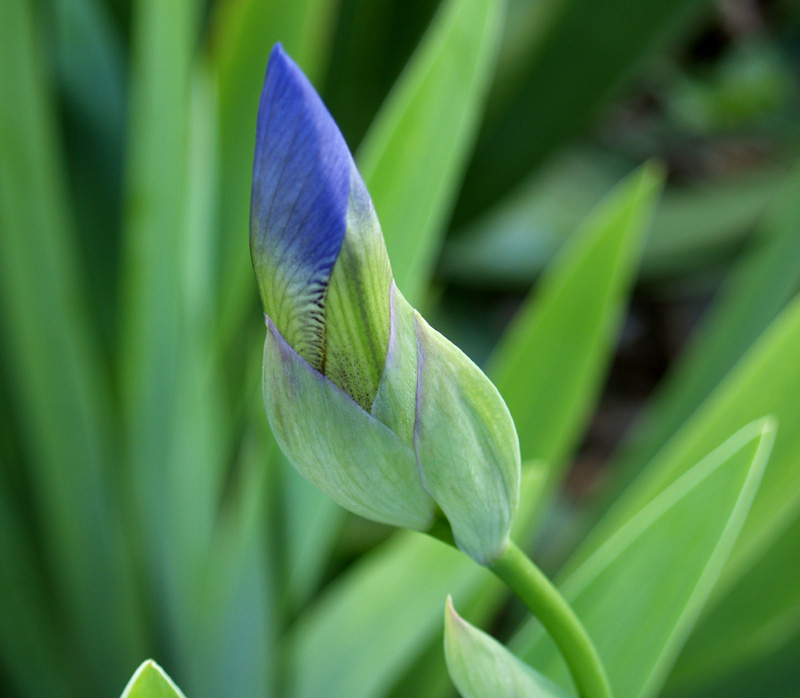 These pink evening primroses in the crape bed have done some moving, too, but on their own.  They came with the house, but originally, were in front. That trunk is a mountain laurel; this view on the right side  of the bed. 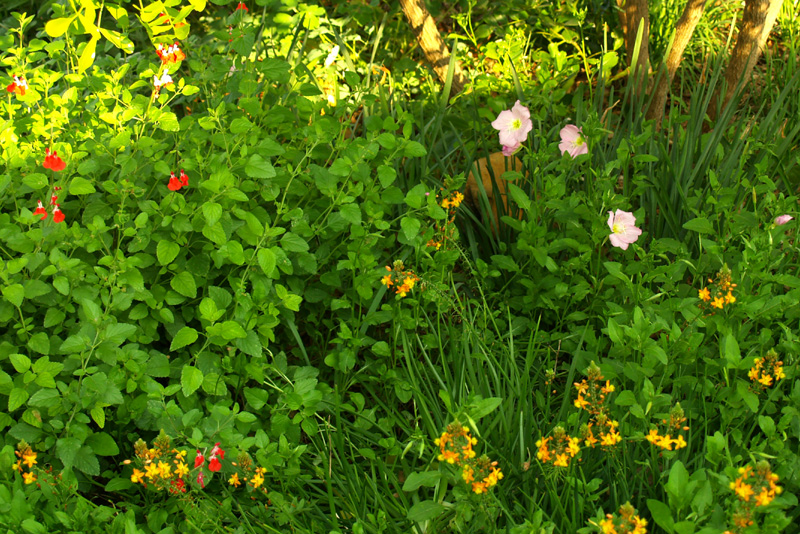 For years, they made a wonderful hedge across the front yard curb every spring.  One year they disappeared, but showed up in Amelia’s fence side. When they got tired of that, recently they settled in the crape bed. 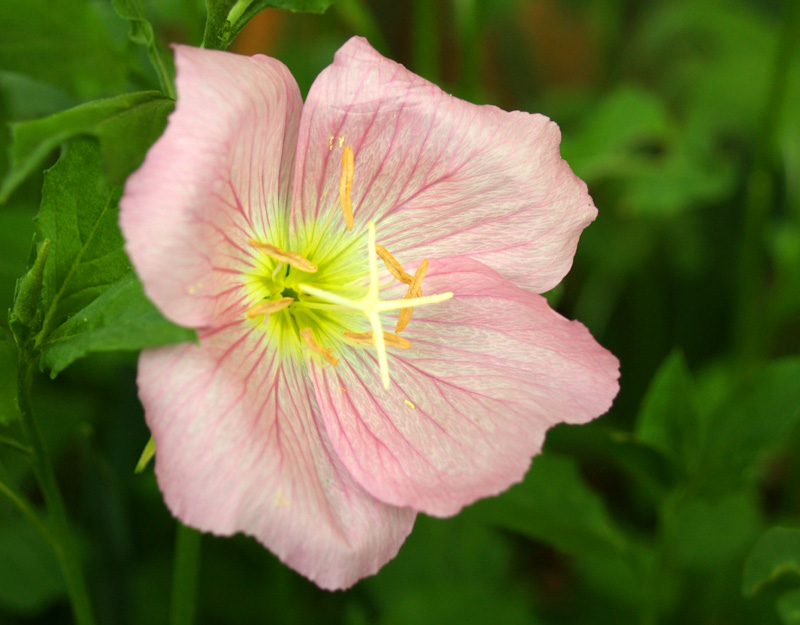 As gardener Cindy MCOK commented on moving plants, they must be on wheels!

Also, in the crape bed, along with them, the columbines, spiderworts, ‘Hot Lips’ salvia, bulbine, and numerous others, here come my first lilies ever, ‘Linda.’ 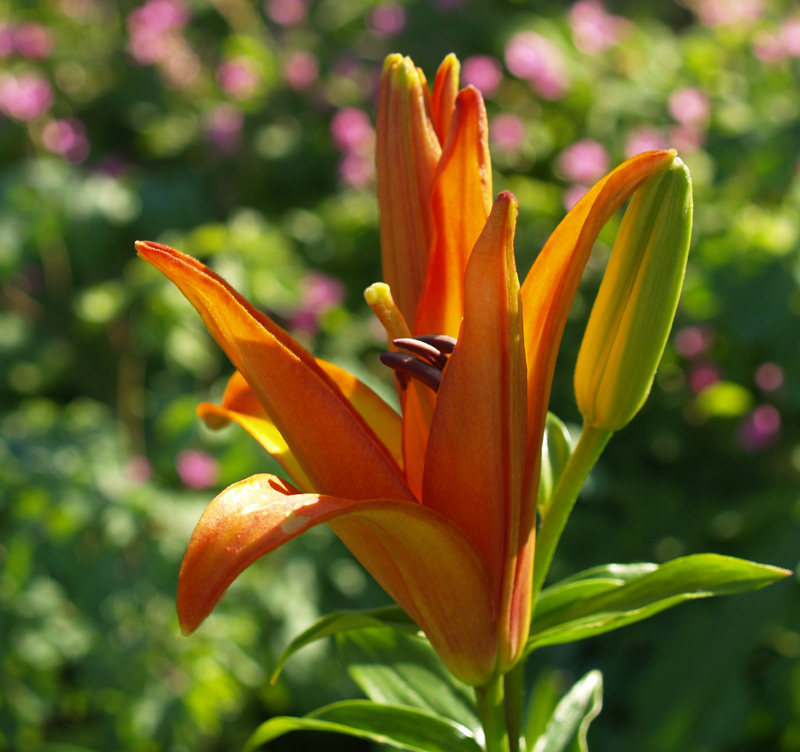 I love lilies but didn’t know if I could have them.  This is an experiment, and if it works, I’ll be looking more into lilies! 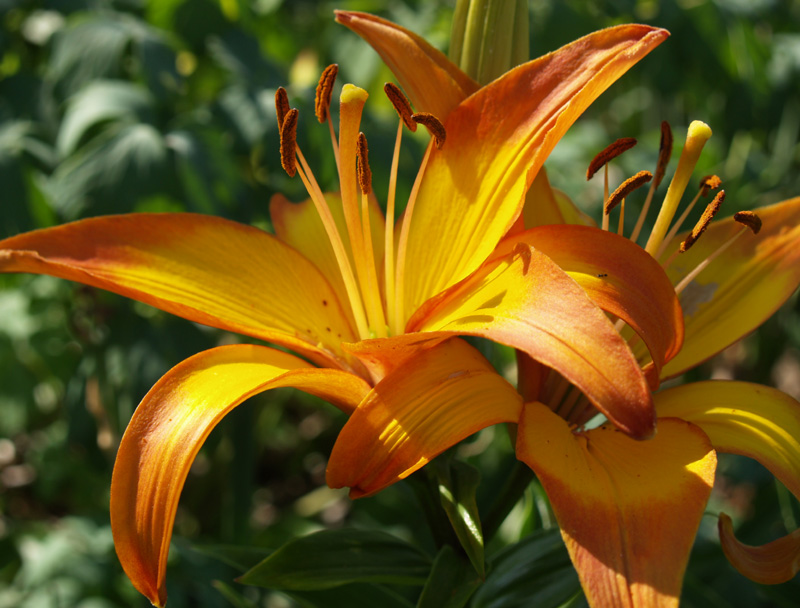 In the front bed that has morning shade and afternoon sun, here’s an experiment from last spring that worked: Berlandiera lyrata (chocolate flower). 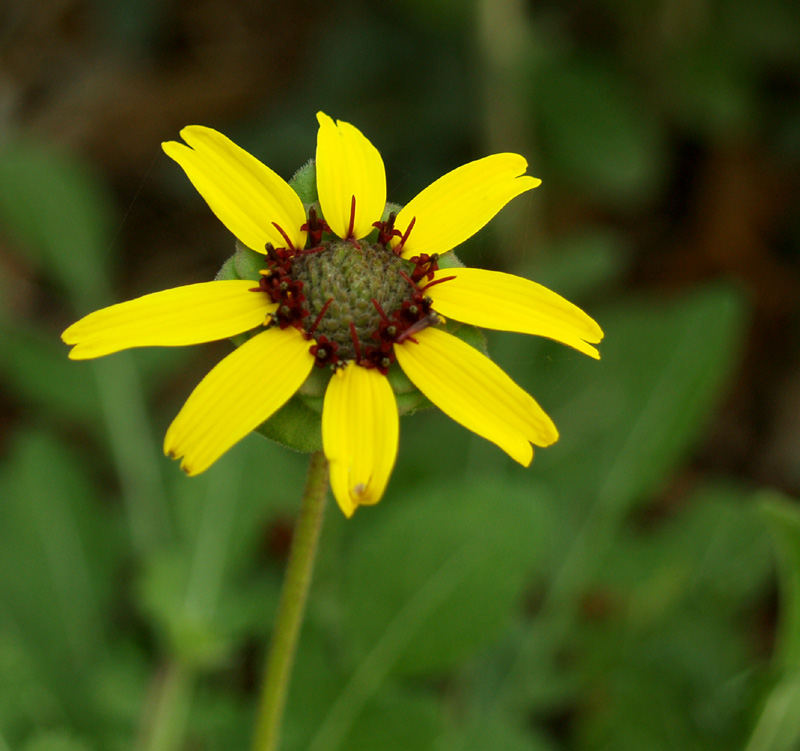 That may be my favorite part of gardening, experimenting.  Taking risks. In other parts of our lives, taking risks can sometimes send up our blood pressure. In the garden, we can be as risky as a kid on a bungee cord.

My experiment to move the Satsuma orange from pot to the ground in the protected, sunny side yard (former photinia-ville) seems to have worked. 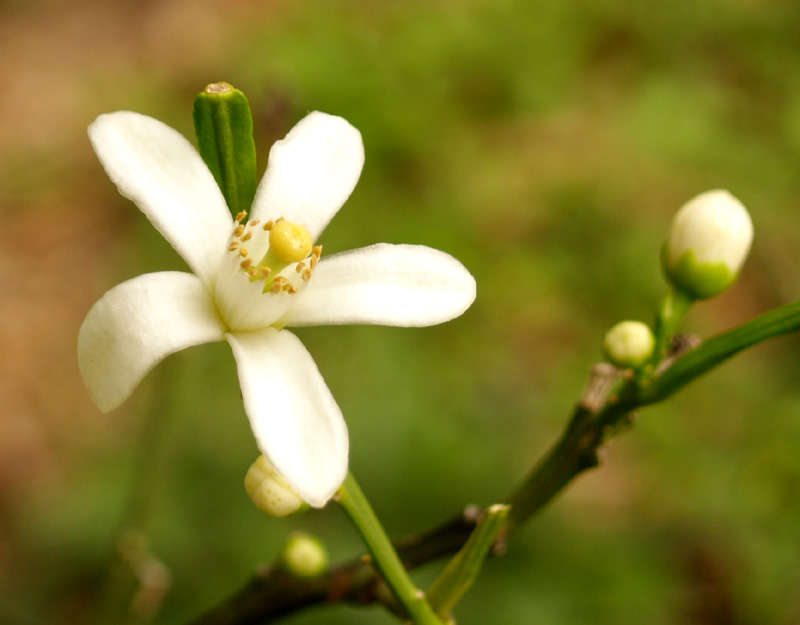 It still looks a bit chlorotic, so I gave it some Epsom salts and seaweed mixture fortified with iron.

Analyzing plant problems is tough, and even worse is analyzing insect damage, if the creature is elusive, or if there are lots of bystanders (innocent insects often get blamed for the real problem, insect or otherwise).

I applaud the CTG viewer who got in touch last week about her established clematis and coneflowers being severed.  Instead of nuking the yard, she analyzed and explored, even taking her camera out at midnight to see what was up. I thank Wizzie Brown, Skip, Trisha, and MSS at Zanthan Gardens for their analysis. It’s still up for grabs, cutworms or snails, but there’s been a lot of unexpected damage going on around this spring.

The main thing, and I know I’m preaching to the choir:  pesticides are not a one-fits-all. And by running out to nuke everything (even organic “cures”) may not help, and could even hurt.

Next week we’re back with CTG, for a remarkable interview with Matt Turner on Remarkable Plants of Texas, and a visit to a local grower to see how plants are “born.”

There’s an event every weekend, but some to note:
Zilker Garden Festival, this weekend, March 28 & 29