CTG is back this week!  Tom and I were thrilled to meet Matt Turner, author of Remarkable Plants of Texas, and hear his remarkable stories. 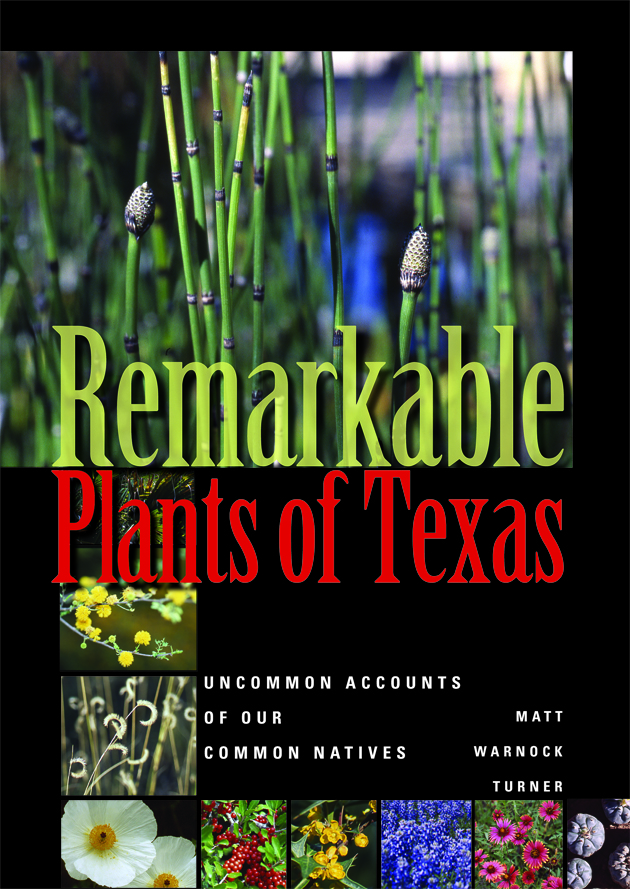 If you haven’t already met Matt at Native Plant Society events, we know your jaw will drop as ours did. He can sure spin a tale, and it’s all even true!  I was really impressed that he took two years off from his “day job” to give full-time energy to a book that belongs on every shelf.

Just as fascinating is our visit to Joss Growers in Georgetown, where owner David Scott and grower Jim Lidgey show us how plants are “born.”  Some of you know Jim from his days at Barton Springs Nursery. Now, as a full-time grower for Joss, he’s loving his chance to be dad to thousands of new plants every season.

On the home front, guess what?  In the iris stand, for the first time in years, this old iris bloomed, along with last week’s lavender one. 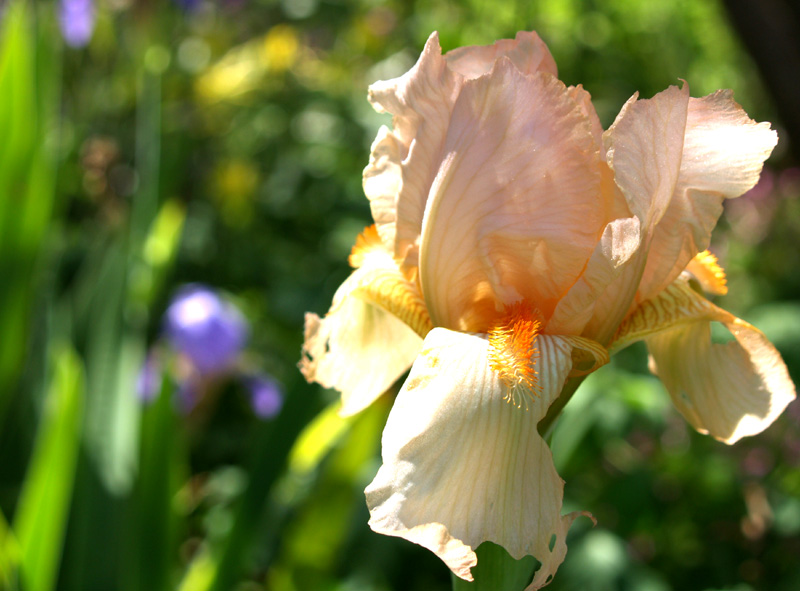 Is this an attention hound kind of thing?  “That one bloomed and got in mom’s blog, so I better bloom too.” 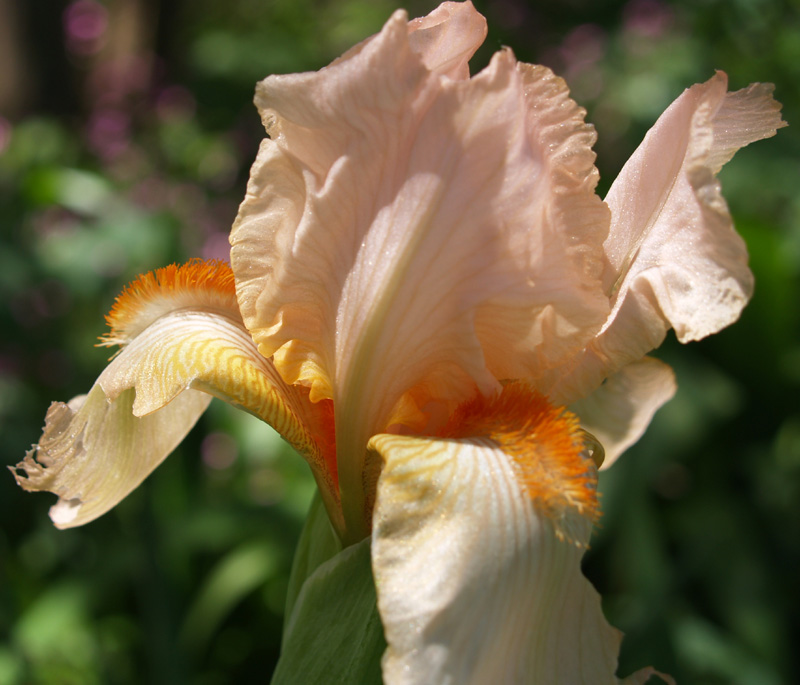 Actually, I’m sure the explanation lies in losing the creek trees, which means more sun on that side of the crape bed.  And perhaps last year’s dose of compost for the entire yard, my best expense and labor of 2008.

To their right, the columbines and ‘Linda’ lilies are in tandem. I planted the lilies to pick up the pace later this year, but it’s fine by me to get it all at once. The best lesson I’ve learned as a gardener is that plants follow their rules, not my expectations.

Also in the crape bed, against the Swiss chard, and along Amelia’s fence, here come the red poppies. 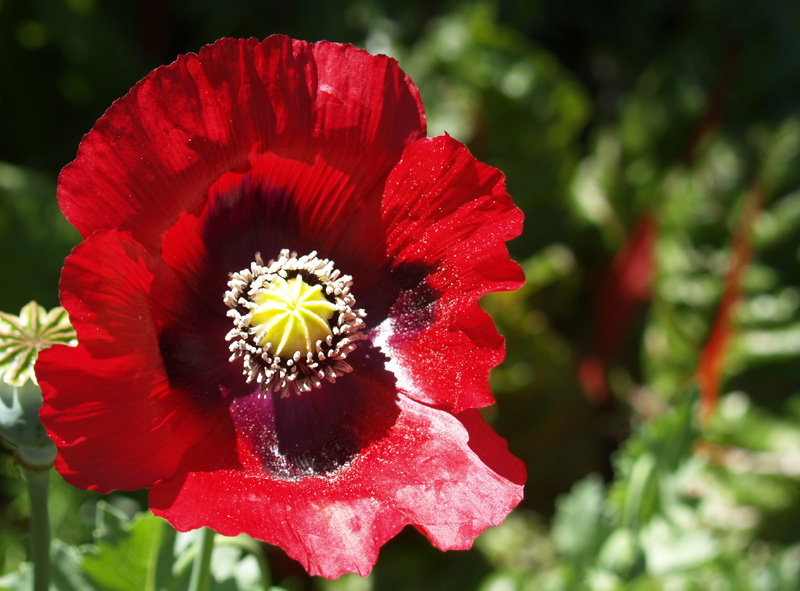 I planted them in fall 2007 from a packet The Natural Gardener simply called their red poppies.  Then, last spring, I collected the seeds, and planted some of them again last October. 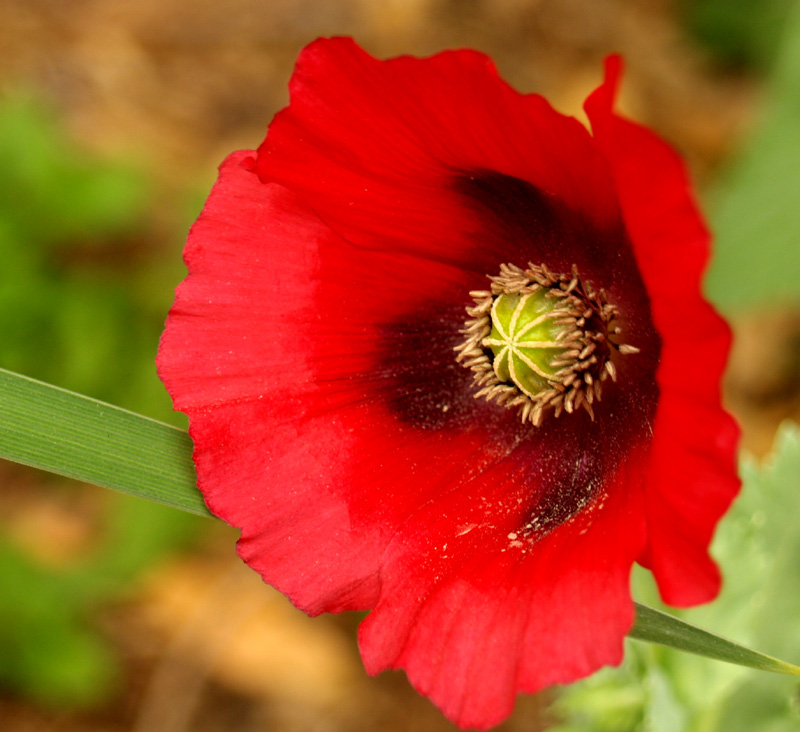 Another stand of pink poppies is blooming against rose Peggy Martin. 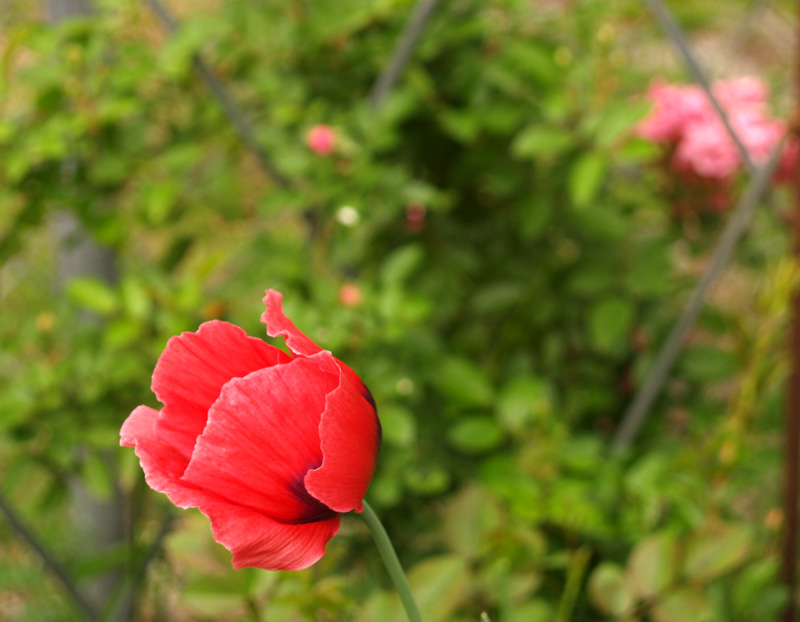 In the crape bed, I get some carmine too, with last year’s Freesia laxa for an encore. 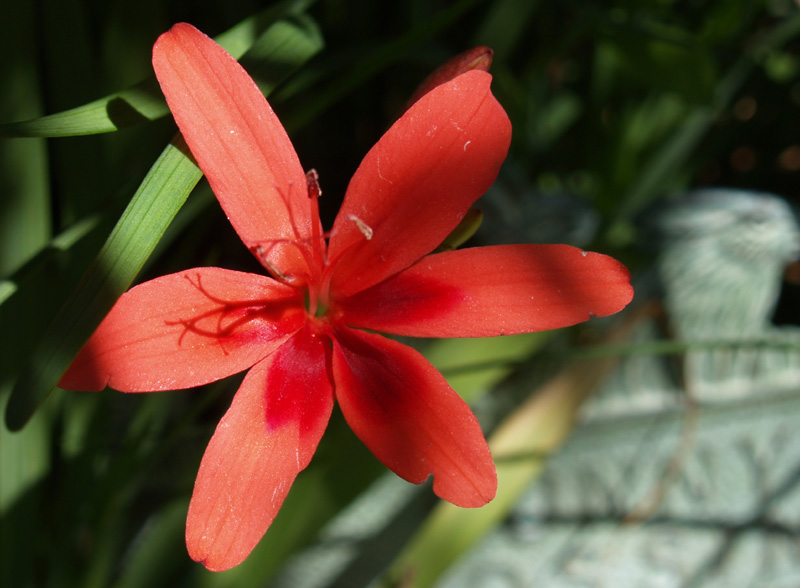 And look at this!  The straggly cat cove roses that I cut to nubs grow another 3″ while I’m at work.  This time, while they’re supple, I’m determined to train them right, by tying them up with twine. As hot as it gets there by afternoon, that’s when I do it, shedding the early morning sweatshirt, since it’s easier to twist them around then. 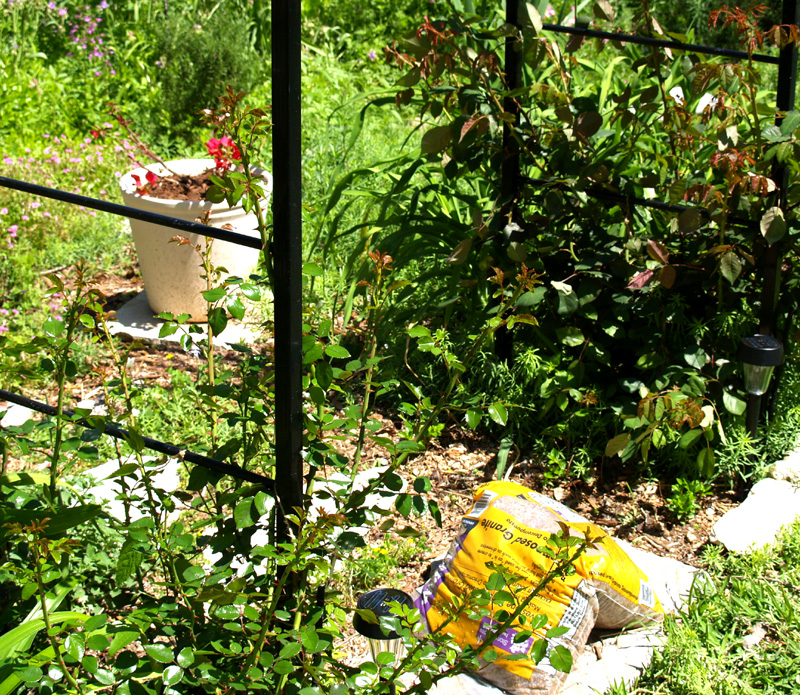 Blue-eyed grass in the cat cove 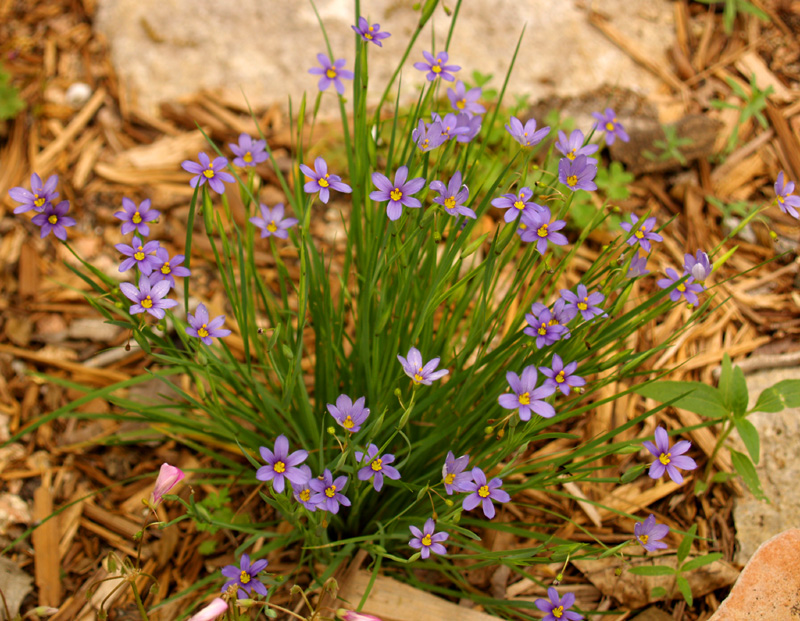 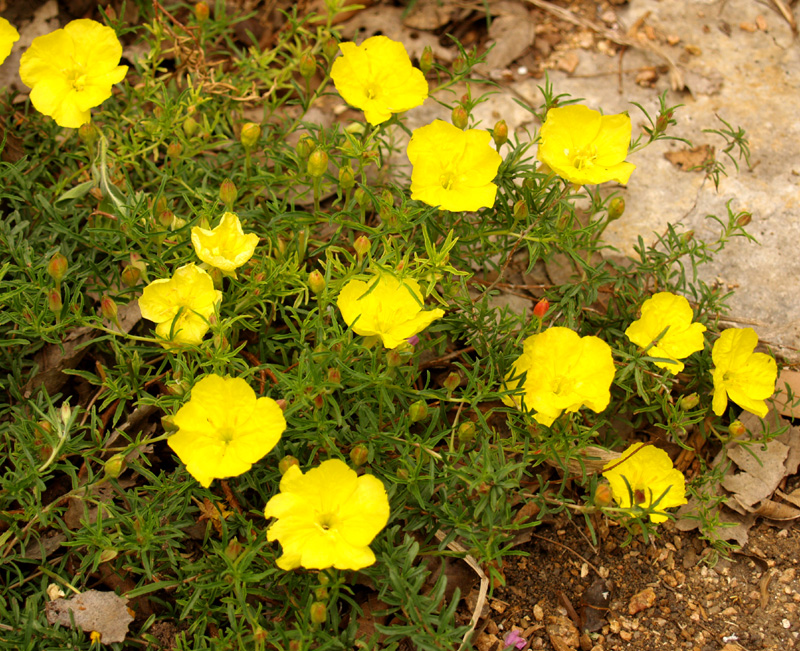 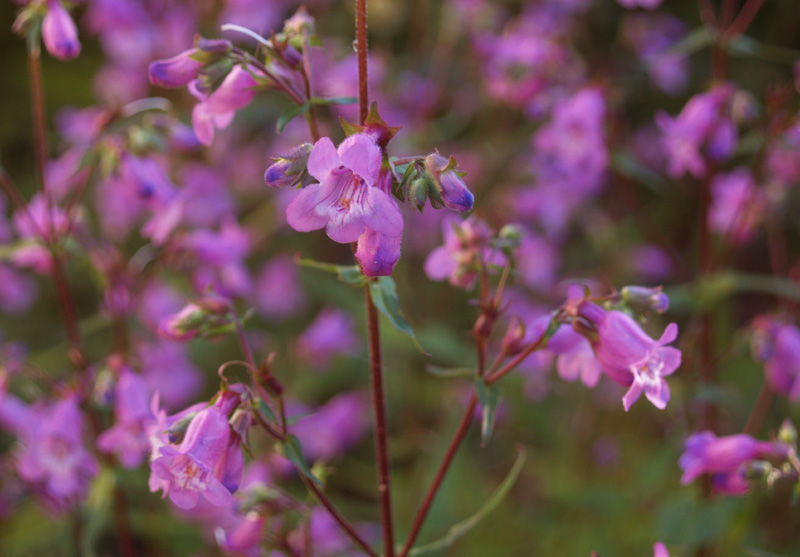 Here’s the Clematis armandii behind the shed. 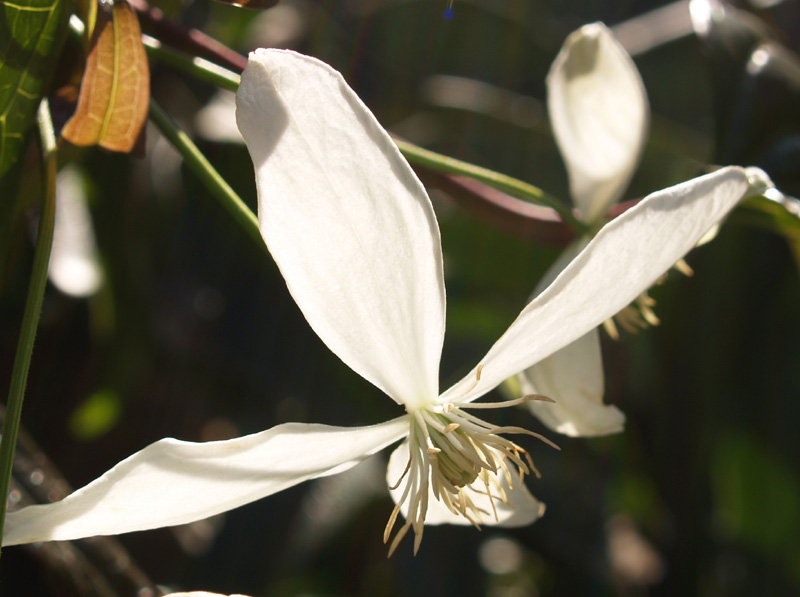 It’s determined to hang in there, even though it’s gone from partial shade, which it wants, to hard morning sun and late afternoon blasts. I’ll keep an eye on it, but I’m not even sure how I’d move it now. Since the Lady Banks has gotten so thick, it’s difficult to snake the hose to it.  If rains don’t come, I’ll water with a can or the soaker hose I laid along the back fence a few months ago. 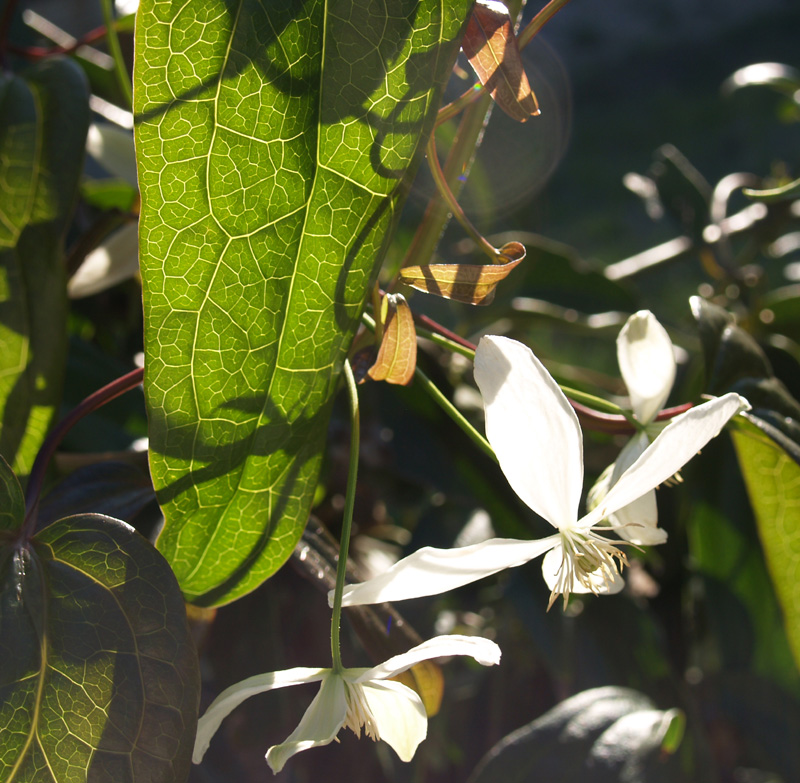 In any case, I recommend this evergreen trouper to anyone who needs to fill a trellis or fence.

There are so many great events coming up, from the Chicken Coop Tour to the Wildflower Center sale and the Master Gardeners’ workshop on “Gardening Above Ground.” Check out our calendar or Events page for what’s coming up.

And heads up on a new British show getting rave reviews, Lark Rise to Candleford. Premiering on KLRU this Saturday, it’s set in the small hamlet of Lark Rise and the wealthier neighboring market town, Candleford, at the end of the 19th century.  Lark Rise to Candleford chronicles the daily lives of farm workers, craftsmen and gentry, observing their loving, boisterous and competing communities of families, rivals, friends and neighbours.  The drama sees the welcome return of favourite characters including Julia Sawalha as Dorcas Lane, who owns and runs the Post Office. See it 8 p.m. on Saturday and 10 p.m. Sunday on KLRU; check your local station for listings.  Sounds fun!