In my east Austin patch, the garden party’s in gear! 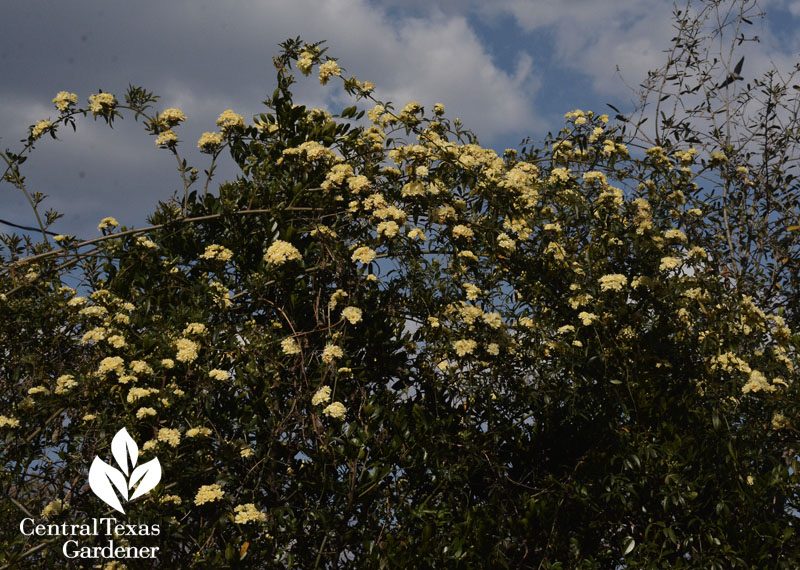 Some guests, like Narcissus Falconet, showed up early. In fact, these were so eager they stood in the ice and rain to get the sunny picture door prize. 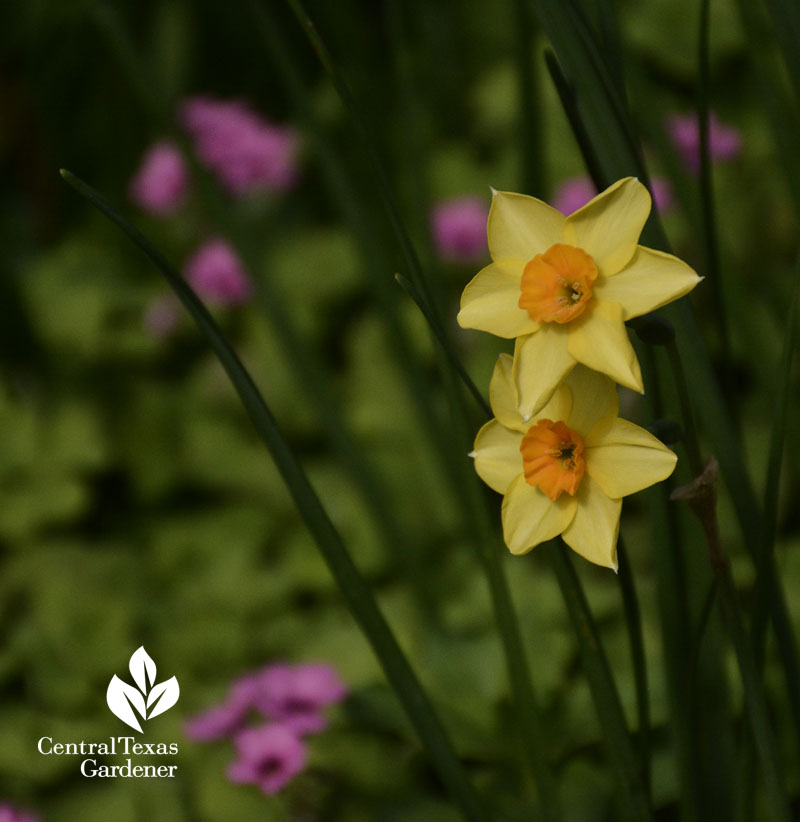 N. Abba was mere steps behind, joined by the first of many larkspurs on the horizon. 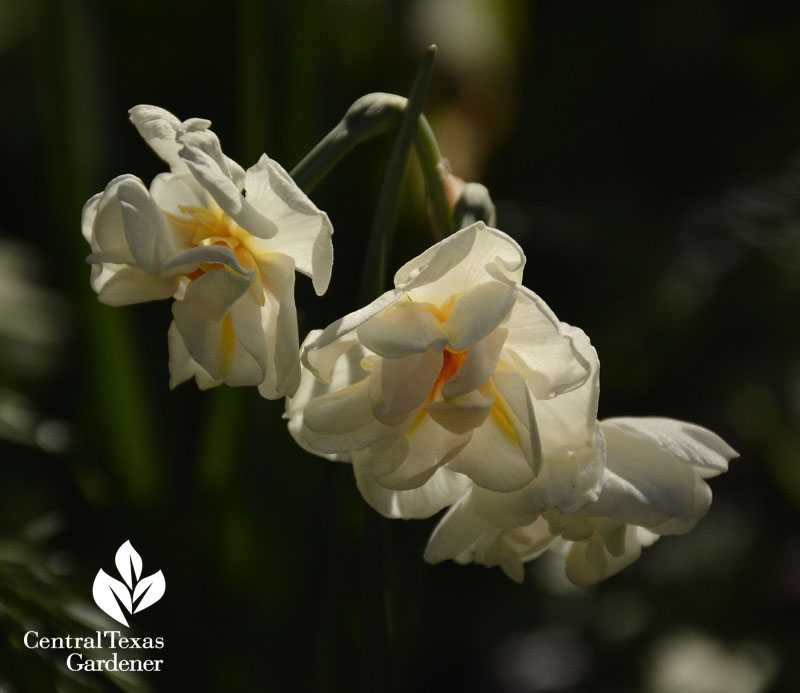 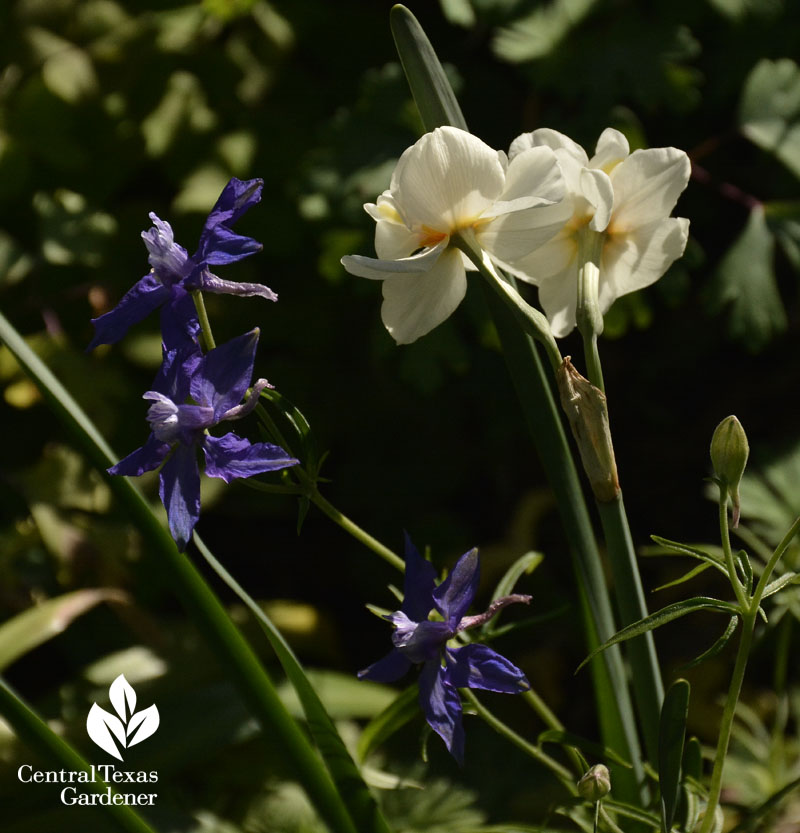 Some plants are still waiting in traffic (especially since SXSW has hit our streets!) 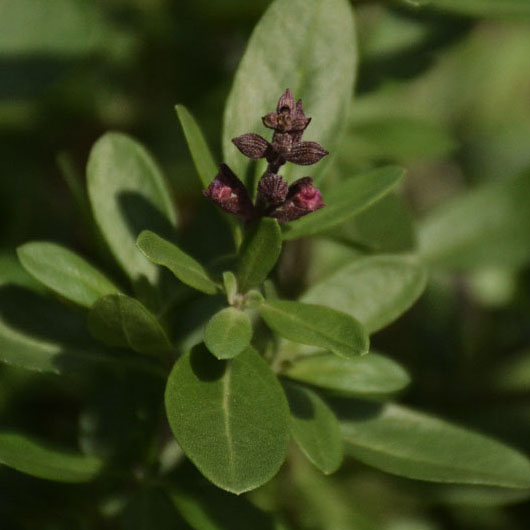 Like my narcissus, spring star flower (Ipheion uniflorum) gets a prize for longest lasting flowers. 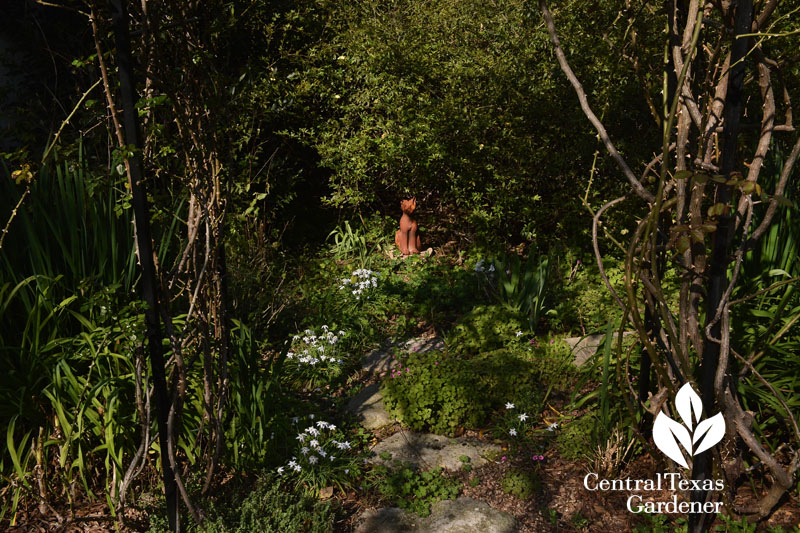 Sweet little leucojums aren’t the showiest flowers in the world, but I think the dearest. Especially I like their strappy foliage that hides cut-back perennials. 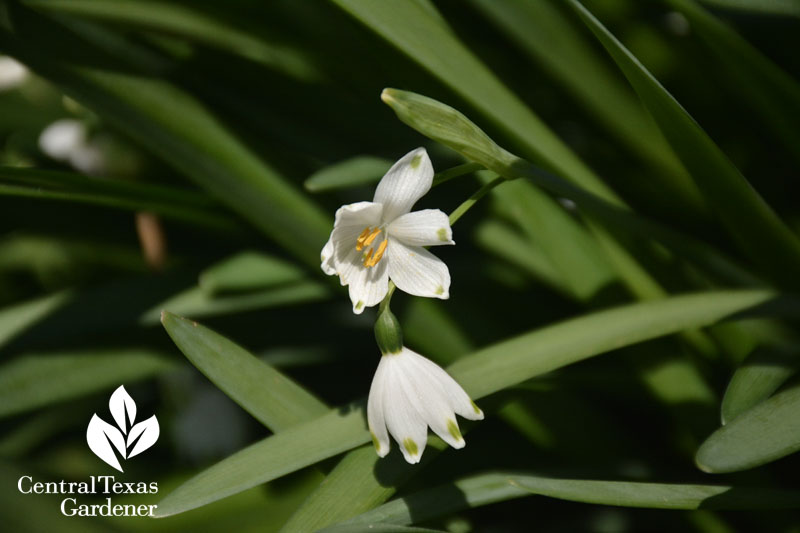 After weeks of blossoming perfume, my Mexican plum’s winding down to enter parenthood. The neighbor’s pecan tree is a wise slowpoke. When it leafs out, we know we’re past the last frost. 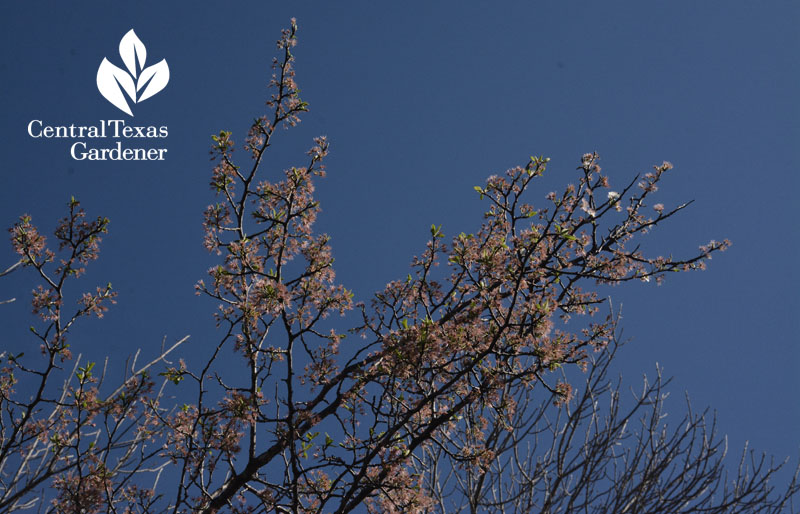 Bees have been scurrying into rosemary since Christmas. 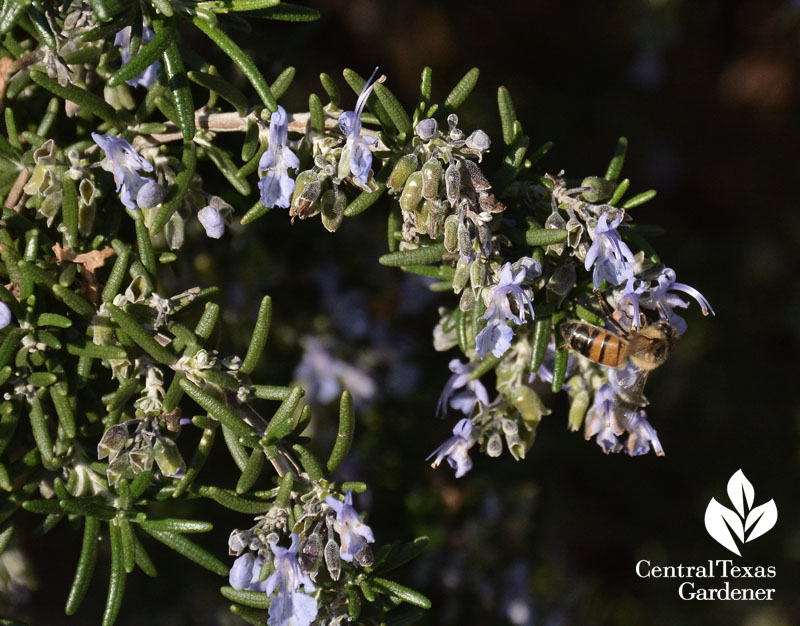 And into oxalis for weeks.

‘Scotty’s Surprise’ oxalis, named for Scott Ogden, is hunkered under a boisterous crowd of aptenia—totally unfazed by icy weather. 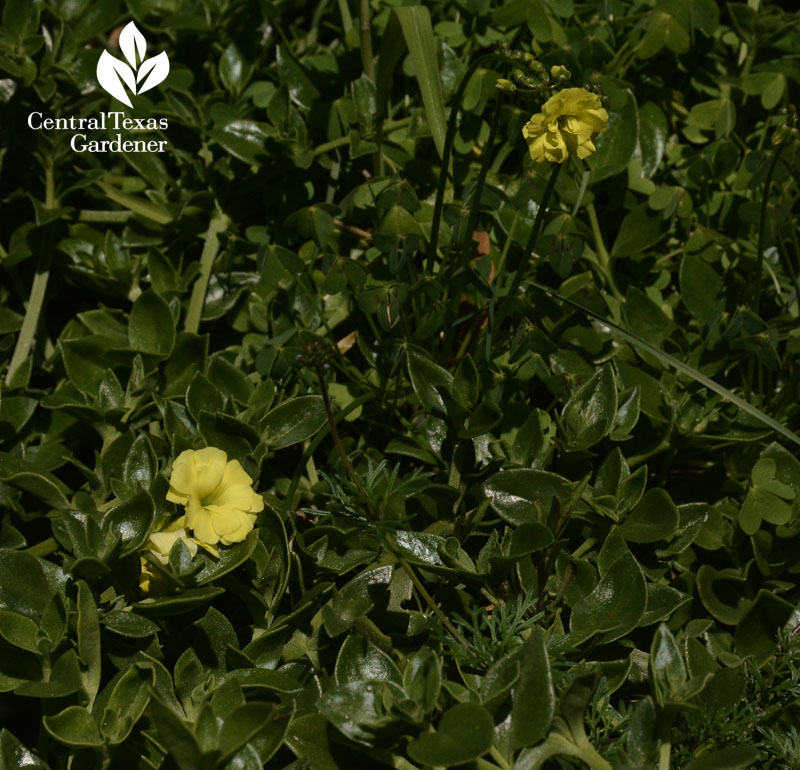 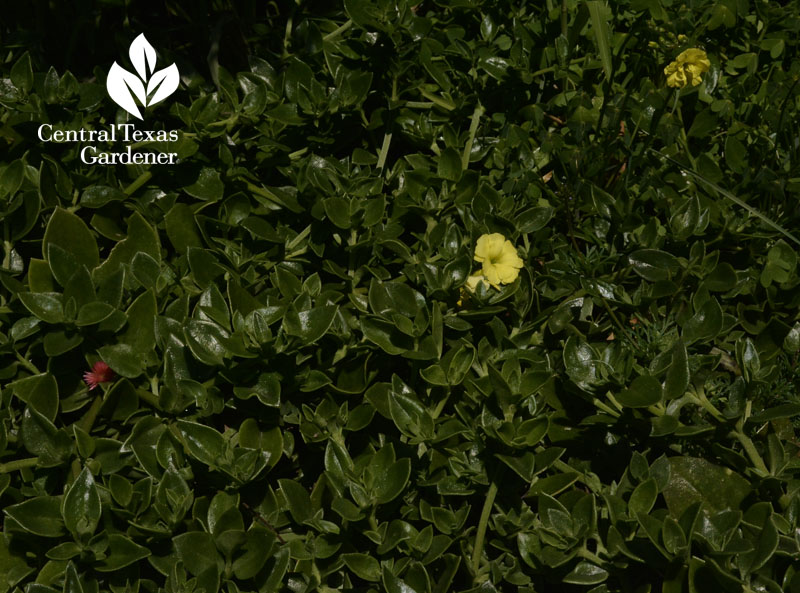 Golden groundsel (Packera obovata) is actually a little late this year. Even though we haven’t had all the snow, even from friends as close as Dallas, we’ve had more stretches of cool and cloudy days than usual. 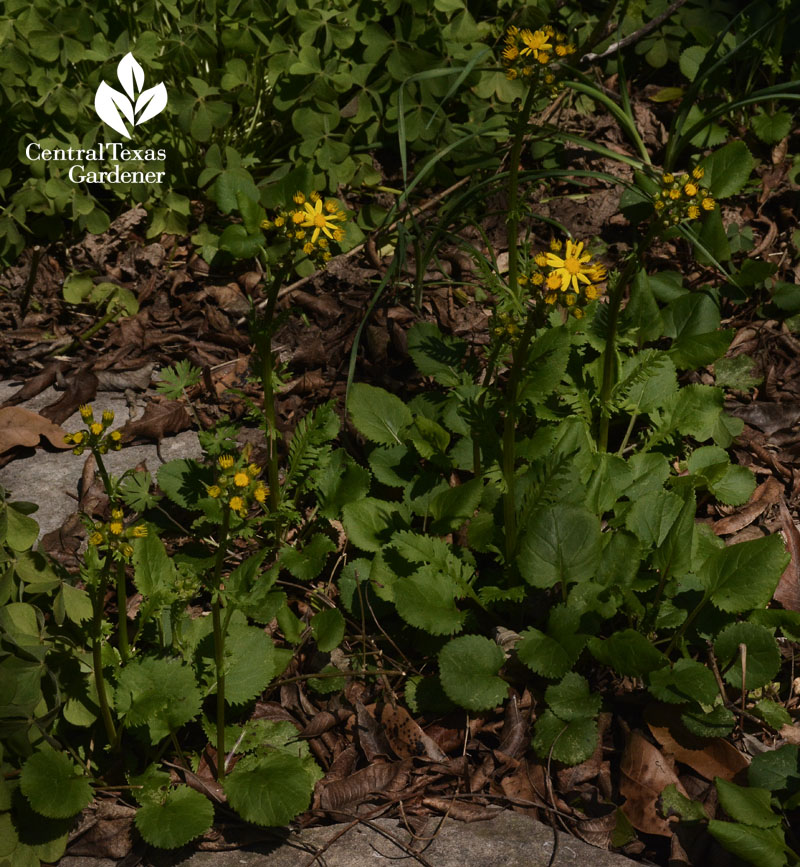 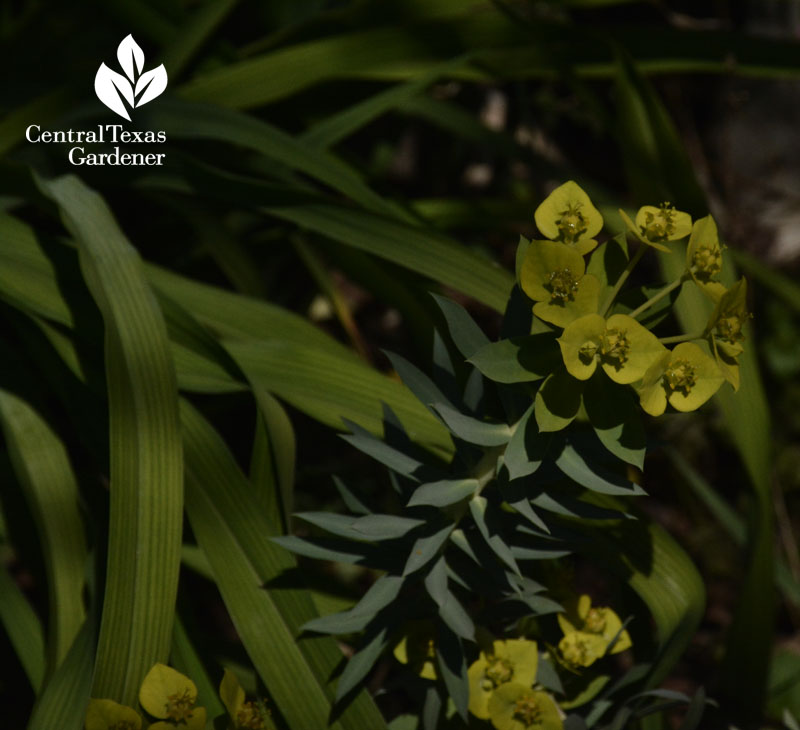 I wished I’d planted more calendulas last November. At least for me, they’re the most tolerant winter annuals in our cold/heat swings. We can eat them, and they’re nutritious for overwintering bees and butterflies, too. 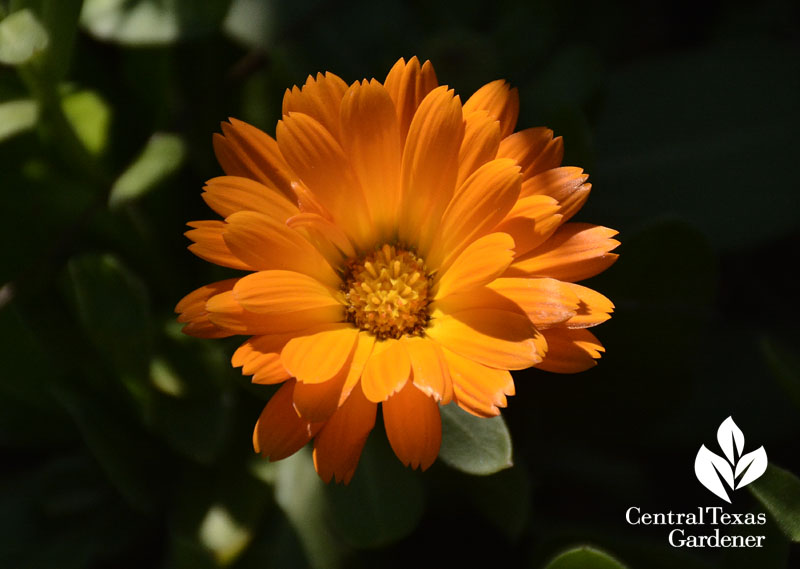 I almost fell over when my fall planted globe mallow joined us for Bloom Day! I’m a sucker for apricot. 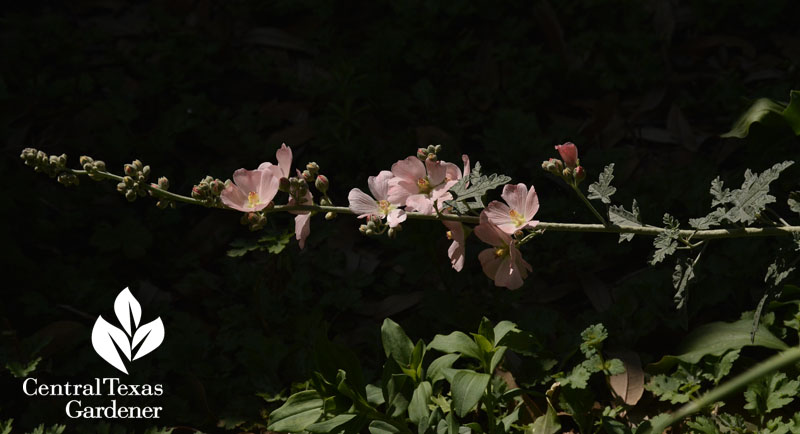 Texas sedges are waving their seed heads around in the breezy, warm day. 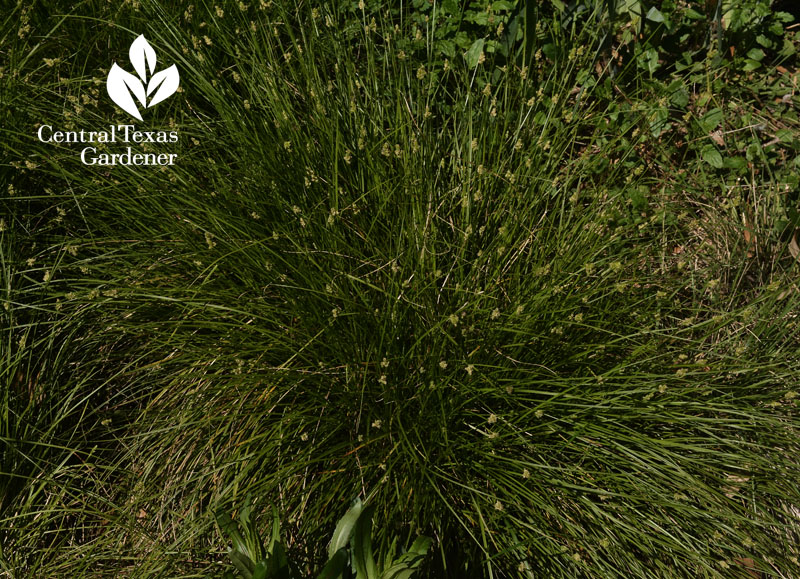 Yellow Lady Banks rose is soon to be frothy. I’ll shape it when it’s through, since it blooms on old growth. 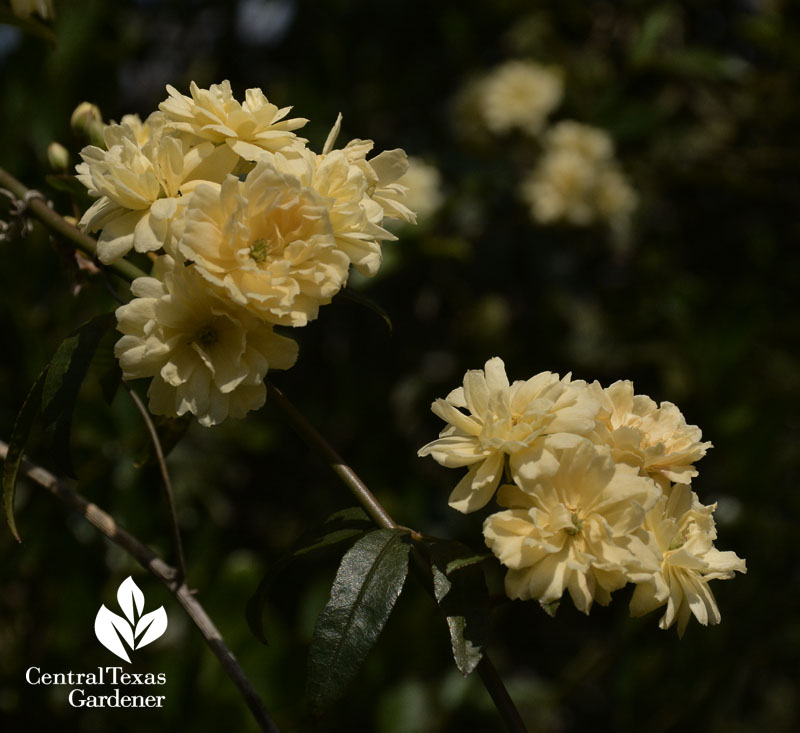 The fragrant white one will be along soon. 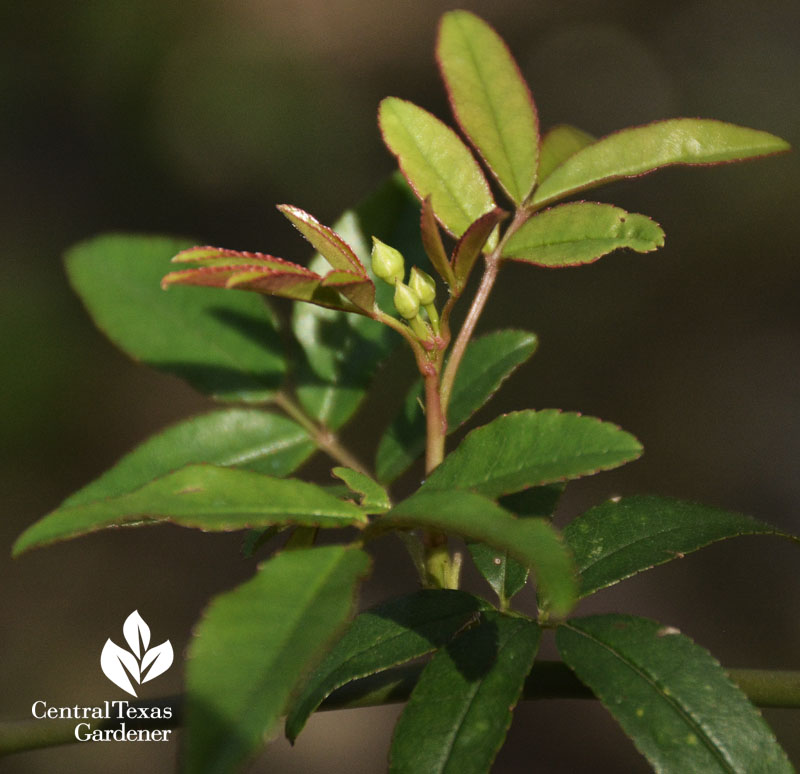 Evergreen ‘Spring Bouquet’ viburnums have been pumping out fragrance in their shady fence-hiding spot since early February. 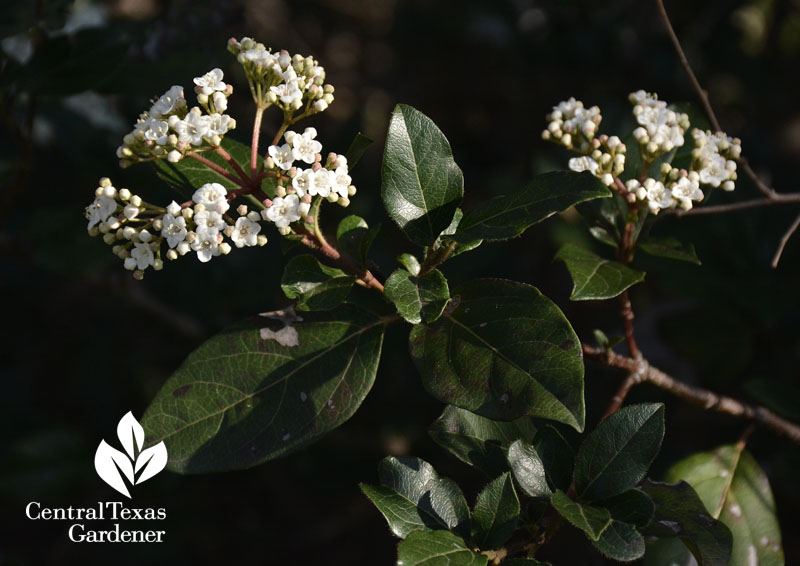 All over Austin, eastern redbuds are aglow, but I’ll take my Mexican redbud—a smaller, better adapted small tree. My house came with an eastern one, but when it threatened to crash the roof, I took it out. But I had to have a redbud! 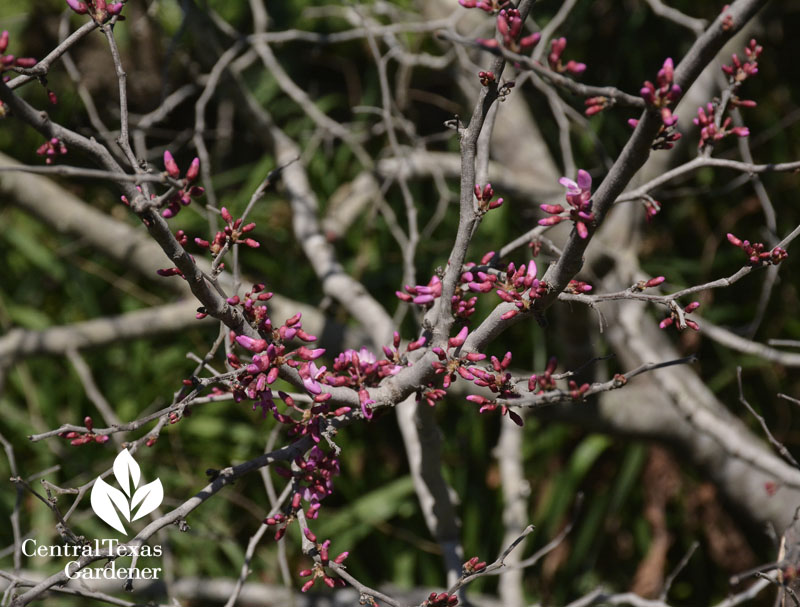 And when native mountain laurels bloom in Austin, it’s a sniff-fest on the grape Kool-Aid scented flowers. Say howdy to the bees scrambling in. 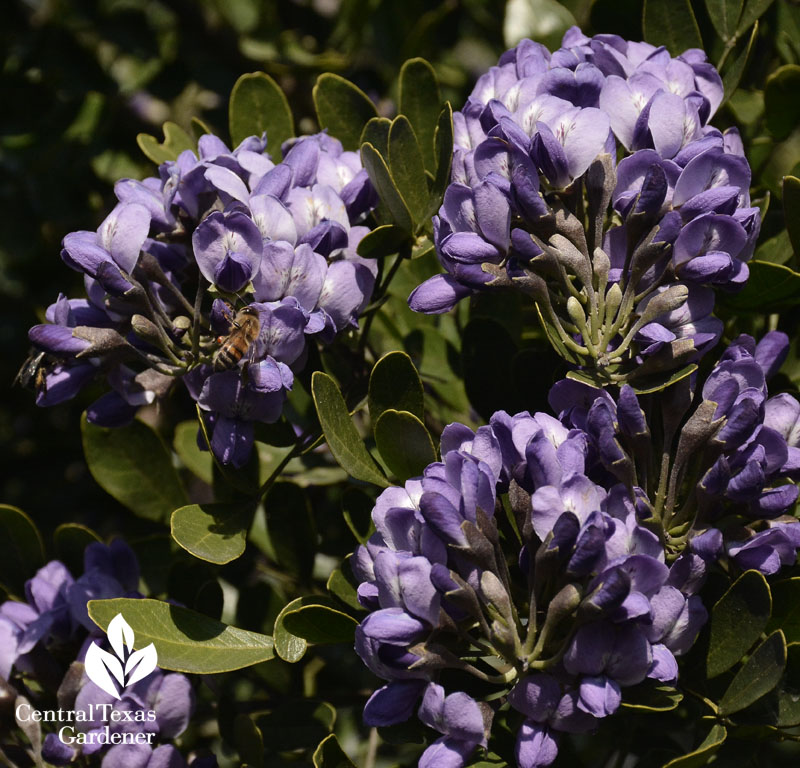 To celebrate Carol Michel’s Garden Bloggers Bloom Day, check out her site to see what’s blooming all over the country and beyond!

AND it’s BLOOM WEEK FOR OUR NEW WEBSITE! Please take it for a test spin.