How Fun Sculpture Connects Us To Wildlife

I’m not afraid of spiders. Good thing, too, since my garden’s populated with these busy weavers that spin enchantment to prep their meals. Since I’m not on their menu, I admire their skills, like dropping a quick “escape rope” when threatened. Fortunately, this spinybacked orbweaver wasn’t worried about me creeping up to admire its red and black ensemble one summer. Maybe because I read Charlotte’s Web five times as a kid and revisited as an adult? 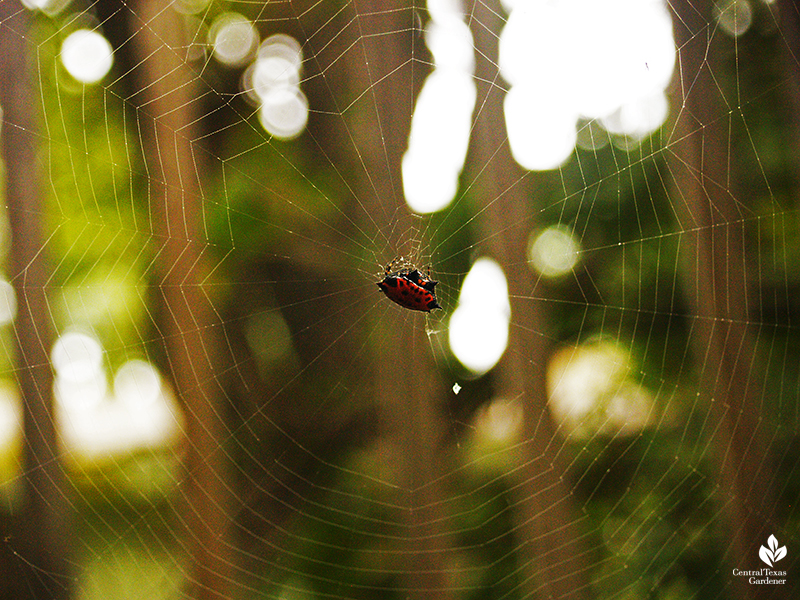 In nature’s food chain, spiders are food for birds and lizards. Nothing’s going to eat this one, though, since it’s a 35-foot metal sculpture designed by Houston-based artist Dixie Friend Gay. 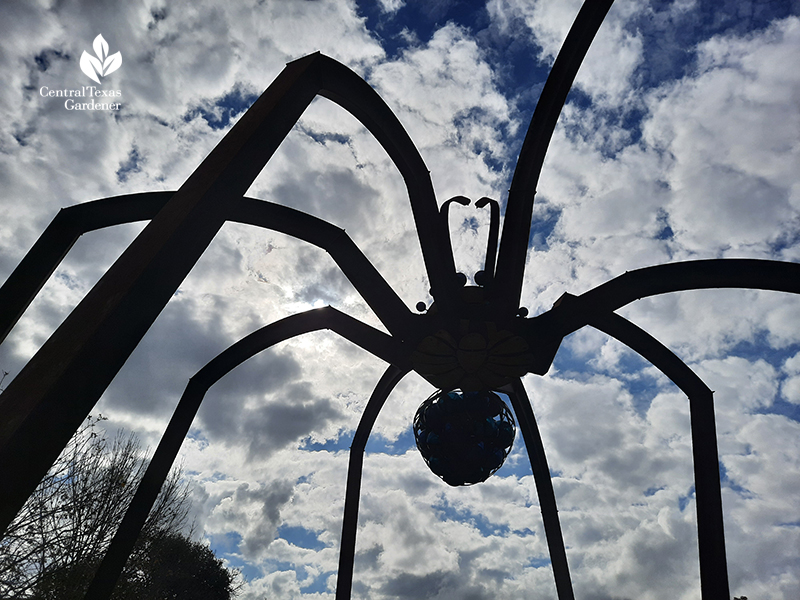 Named “Arachnophillia” as a nod to arachnids (spiders and others with eight legs), she graces an entrance to the Mueller development, just off Berkman Drive, once a parking lot at the former airport. I well remember it! 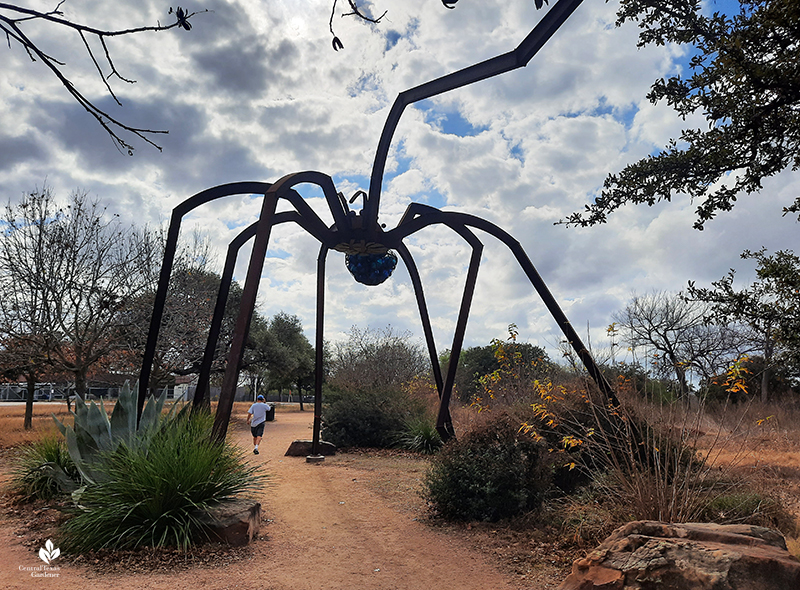 Nowadays, it’s a popular walking/jogging trail at the Southwest Greenway beyond Manor Road, designed by RVi Planning + Landscape Architecture. I even heard two small families hook up for a safely distanced and masked pre-New Year’s picnic. 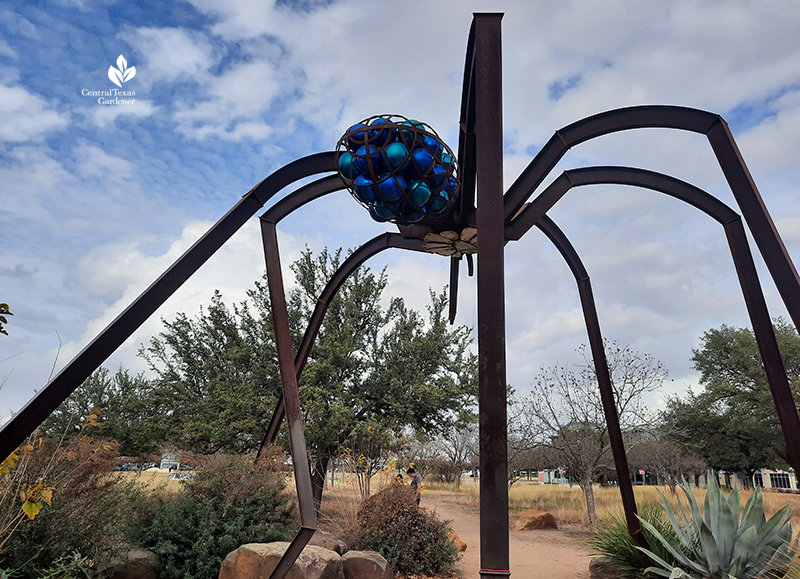 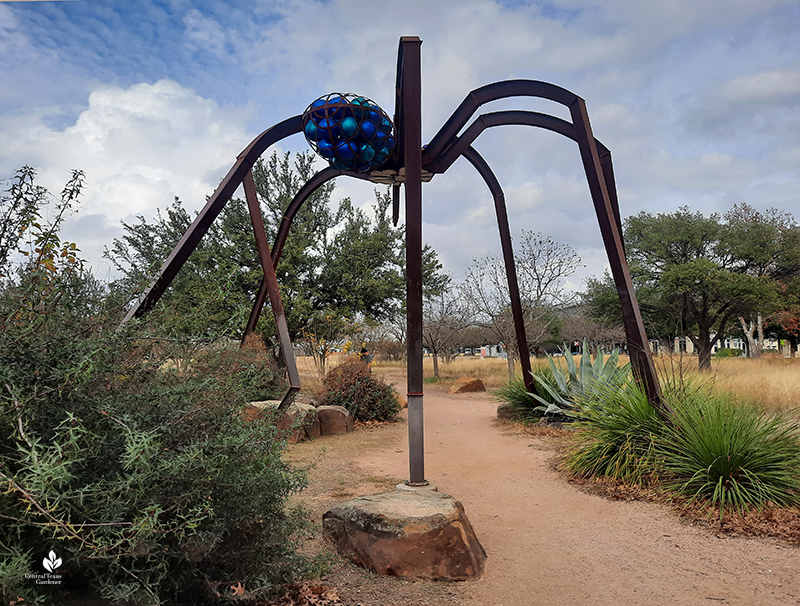 Instead of strong white egg sacs spun with silk, “Arachnophillia” gets really heavy-duty with glossy metallic green and blue eggs to invite fascination and (I hope) appreciation of all life in our gardens. 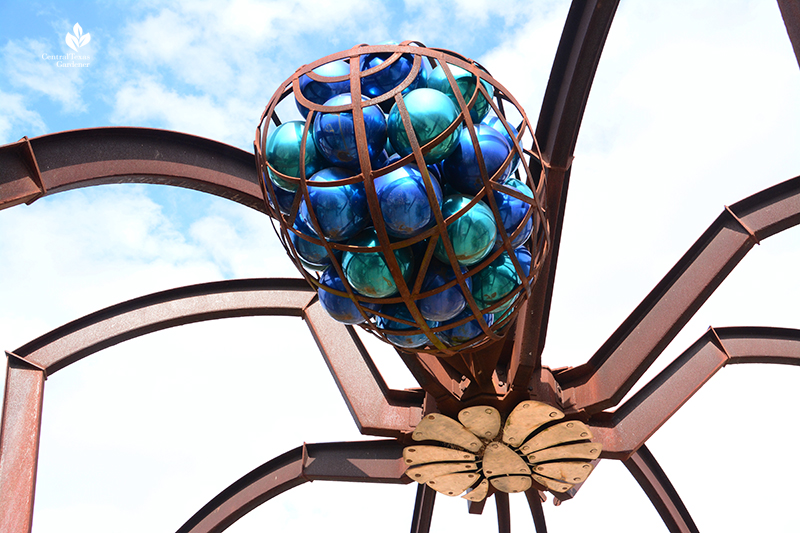 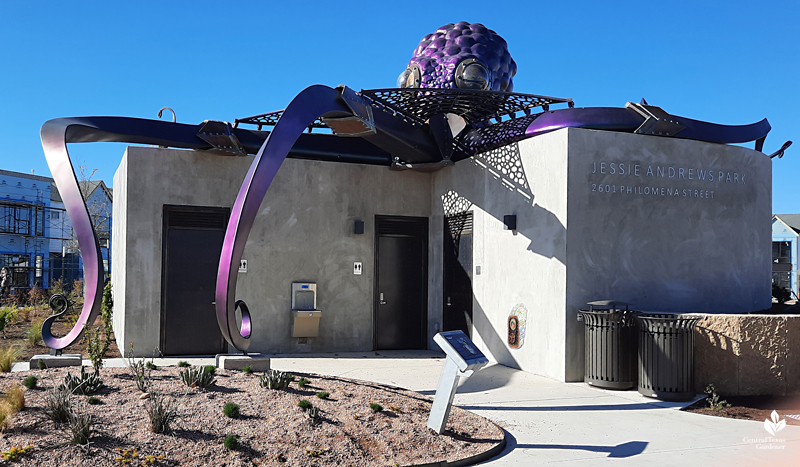 On a pre-New Year’s jaunt, I got acquainted with “Ocho” who keeps a placid tentacle on neighborhood and park activity. 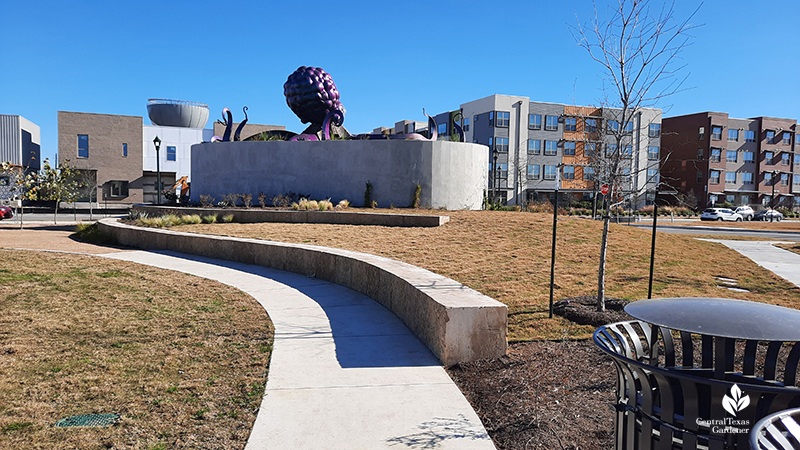 The park’s named for Jessie Andrews, the first woman to graduate from The University of Texas at Austin in 1883 and its first female teacher in 1888. The university’s Andrews Dormitory, built in 1936, is named for her.

Crafted from forged metal, “Ocho” is coated with an automotive color shift paint meant to mimic how octopi camouflage themselves. The park’s designer, Chris Lalich, project director at RVi Planning + Landscape Architecture, said that the color changes from purple to deep blue as you walk around it and light hits at different angles. 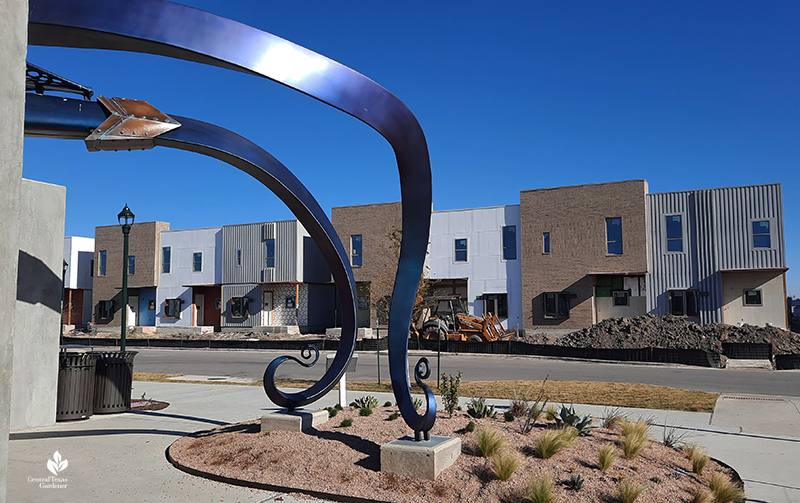 He noted that they perforated the (metallic) thin skin area between the tentacles as a shade awning. 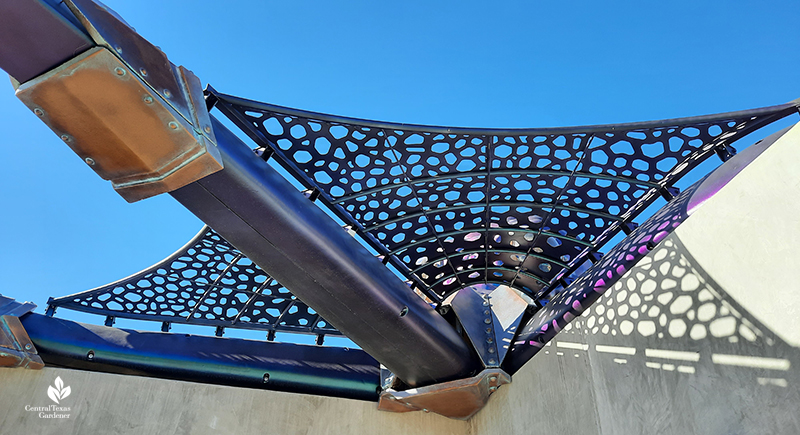 Dixie’s seashell mosaic should make “Ocho” feel right at home since 260 million years ago or so, this area was covered by seawater. I don’t know if octopi were around then in what we now call our yards. 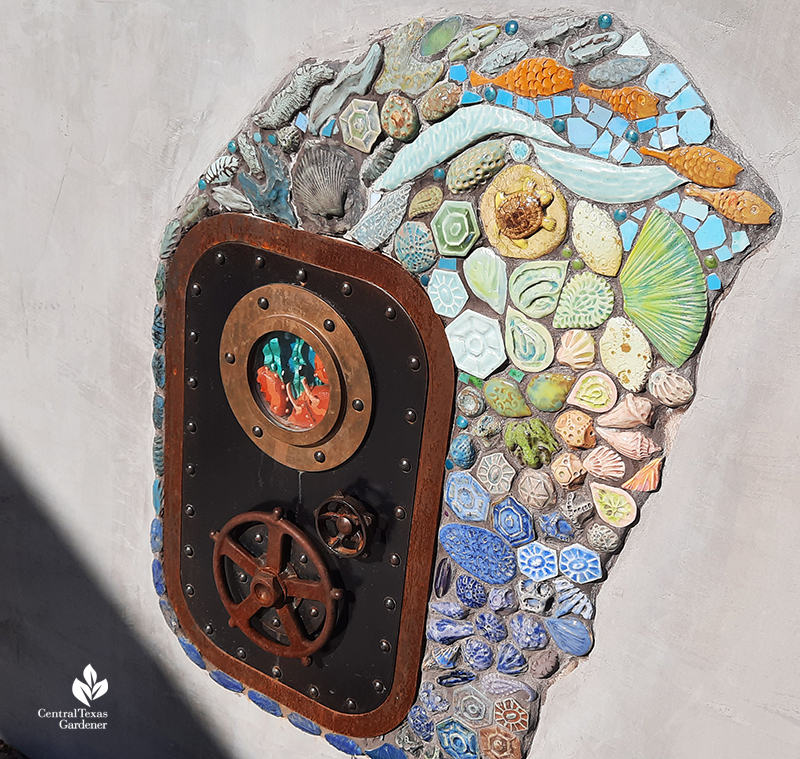 When a young family came to joyfully explore, I moved on to my errands. Later, a colleague told me that when his family spotted it on their Saturday rounds, they stopped for a picnic at one the park’s tables. I’ll plan one soon, too! 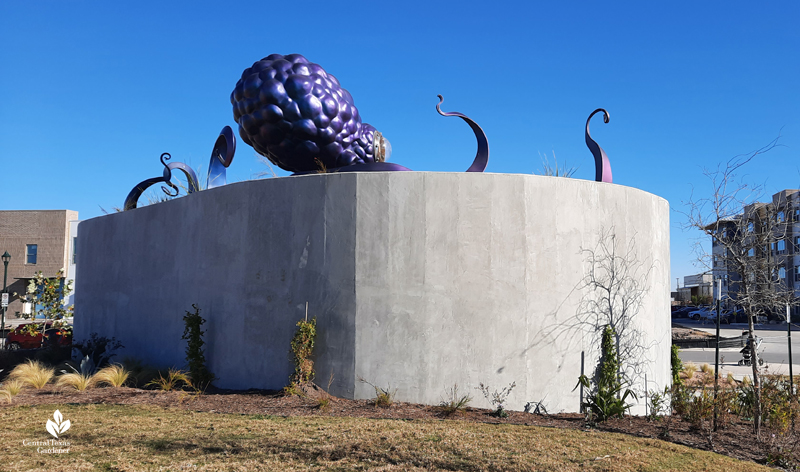 When I returned another day and clouds moved in, “Ocho” seemed to arise from the sea, appropriate since Dixie drew inspiration from classic movies like 20,000 Leagues Under the Sea and Mysterious Island. 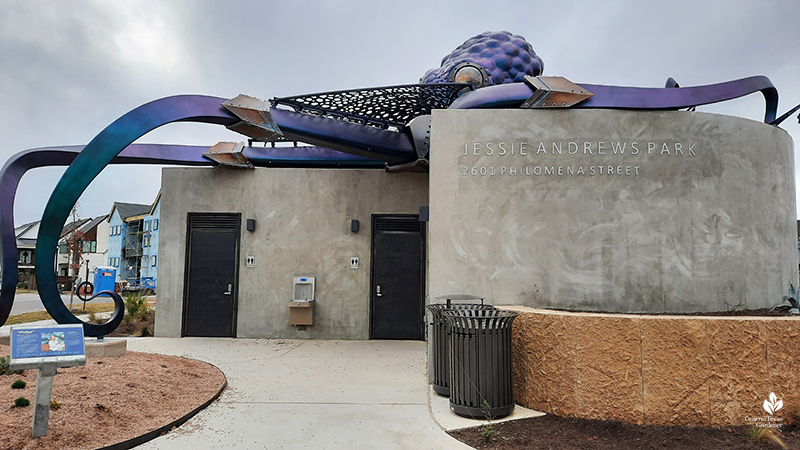 “Ocho” must wait a season or two while newly installed plants grow in to mimic a coral reef, including its rooftop garden. 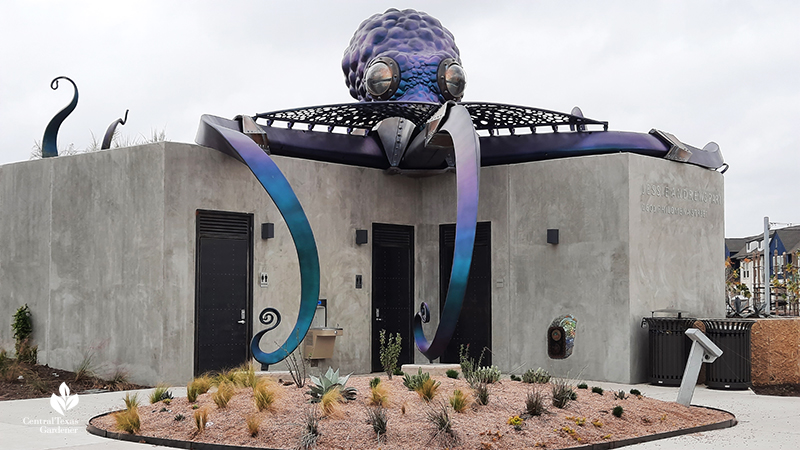 I adore this stone wall protective surround and planter. To me, its veining mimics the intricacy of a coral reef. Chris said they were thrilled to source this at Champions Quarry in Lueders. 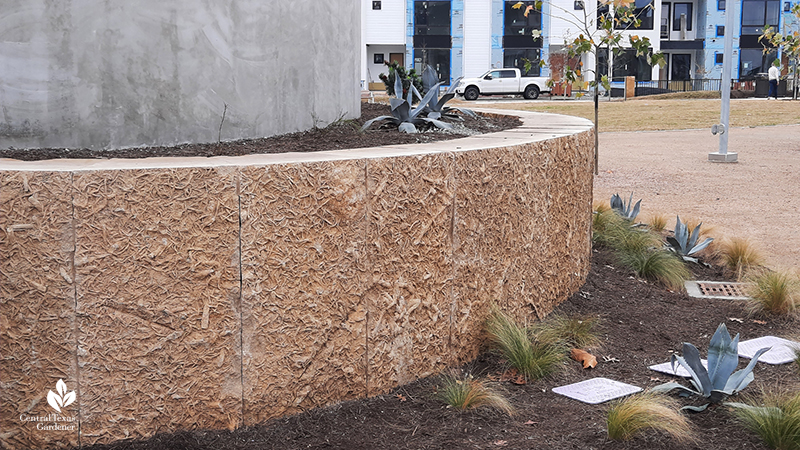 Since now’s a great time to plant trees and many shrubs and perennials, we repeat our segment “Native Alternatives to Exotic Plants.” John Dromgoole picks out tools to help you through upcoming busy days. Plus, see how Sandy Stone and Joe Brown created their own garden art while restoring habitat. Croquet, anyone? 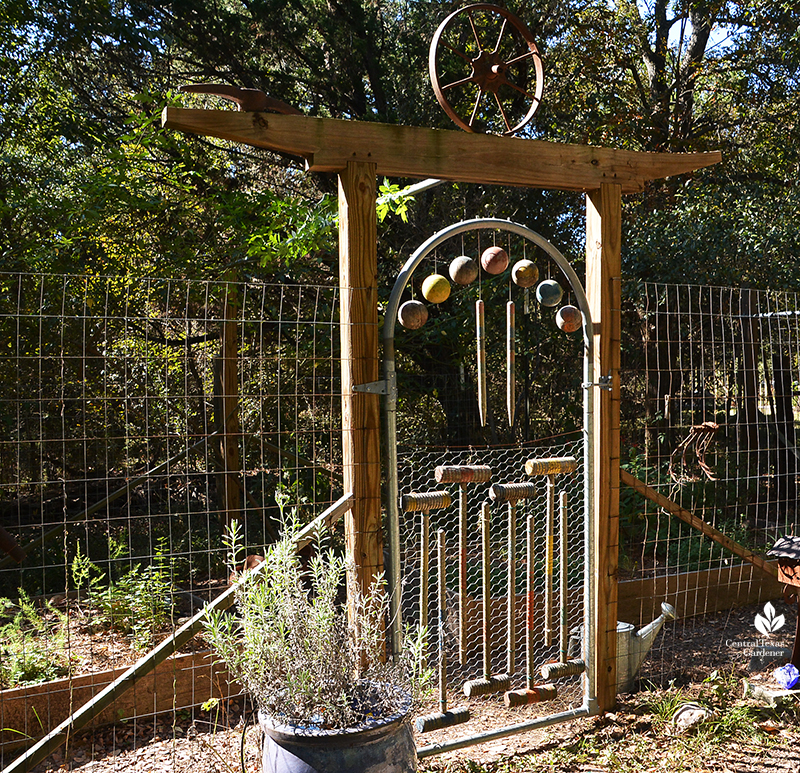