We Fought the Zone and Native Plants Won!

For the fun of it, I pulled out my garden journal annotated “Christmas 1999,” a gift from an Austin PBS colleague. My first entry: “6 months without rain.” Then on January 19, 2000: “Broke record 90° since 1953.” In July, after it hit 107°, Austin (and other communities) imposed mandatory water restrictions for the first time in my adulthood. My native perennial coneflowers go along with “whatever,” welcoming my garden’s first Monarch butterfly this week. 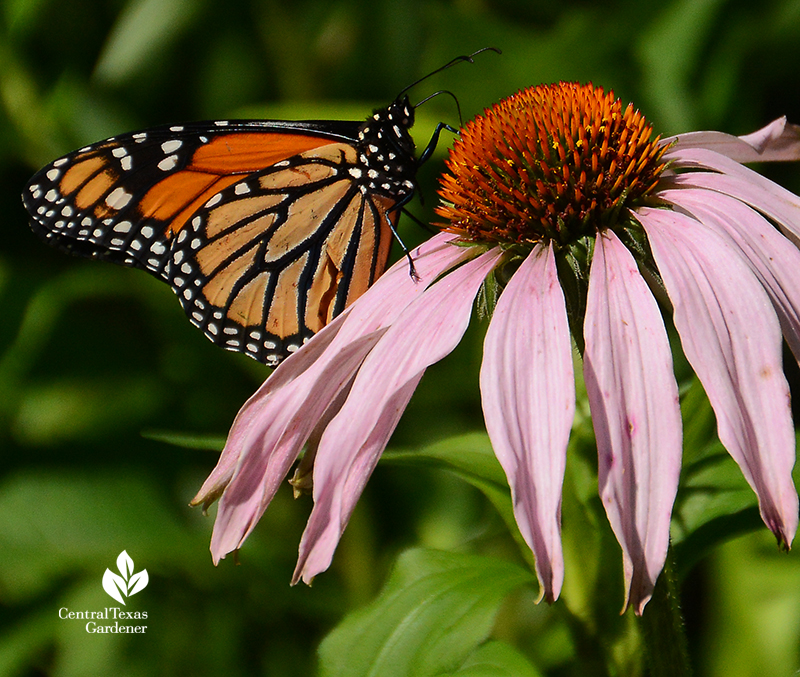 As temperatures climbed every year, we started pushing zones, planting citrus, sago palms, non-native succulents, and various tropicals that did fine for a long time. We fought the zone (USDA Zone 8) until the zone fought back in winter 2011 and 2017. We suffered losses and optimistically tried again.

I sure did with spring-fragrant star jasmine vine, and it worked! Until February 2021. Yes, it’s coming back from the roots, but it may be time to take the hint and move on. 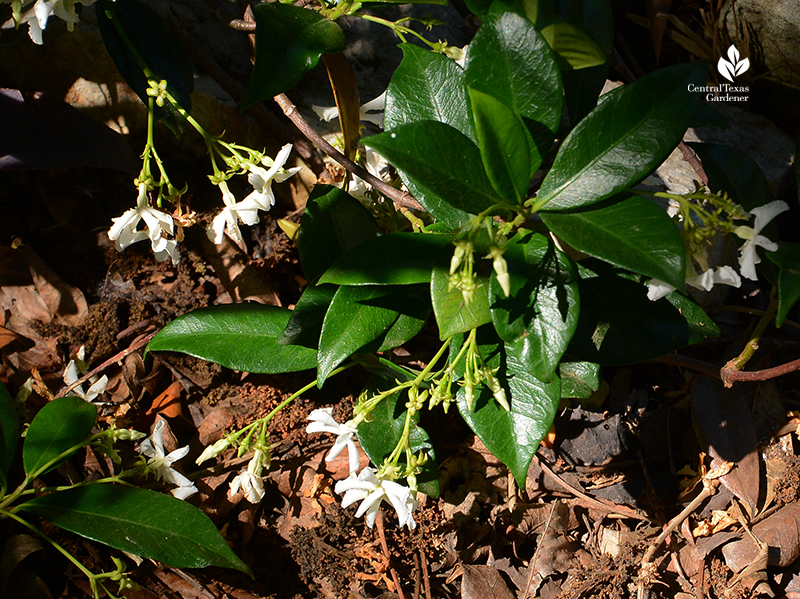 In 2017, I lost some firecracker ferns (Russelia sp.), but the ones that made it are jumping back fast from established roots next door to crinum lilies. 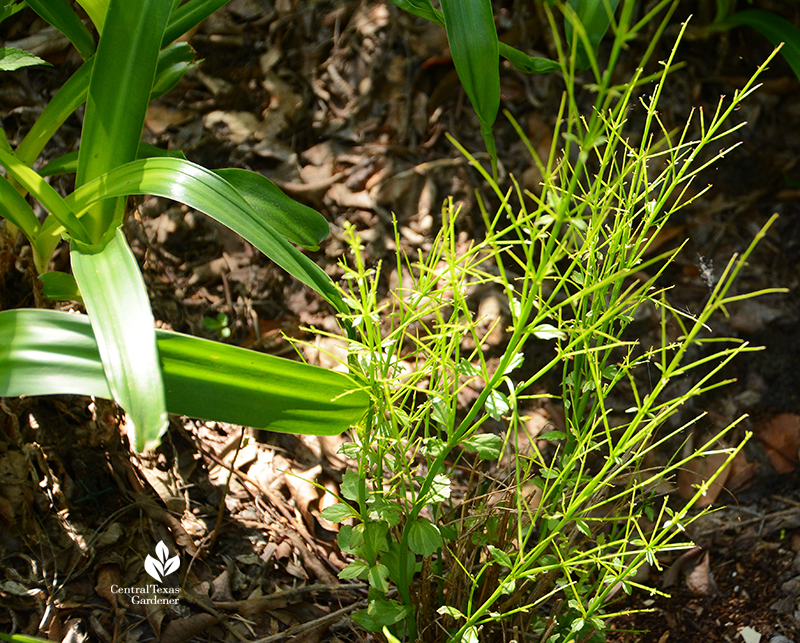 Native to Mexico and Guatemala, their fiery, tubular flowers are surefire hummingbird beacons. 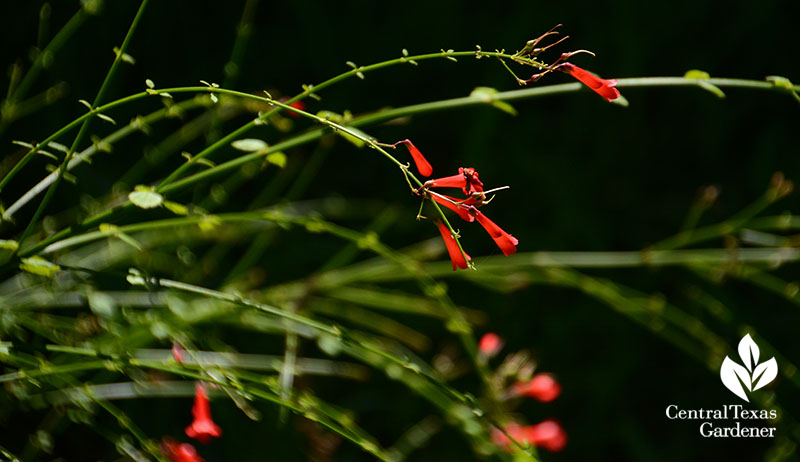 Hummingbirds and insect pollinators already discovered Salvia microphylla ‘La Trinidad Pink’, another with roots in Mexico that didn’t mind the deep freeze. It gets morning and afternoon sun. 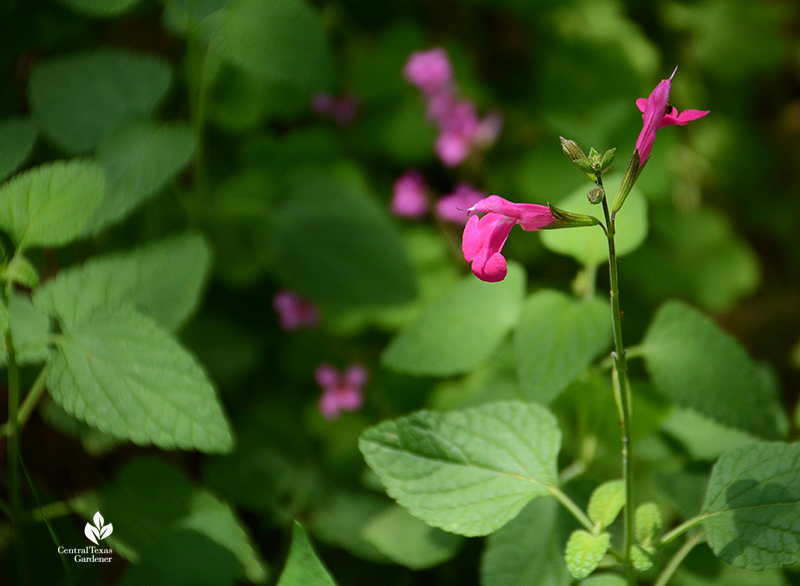 Salvia ‘Silke’s Dream’ is a cross between S. microphylla and S. darcyi. This one gets morning sun and a bit of afternoon sun. This one and all microphyllas benefit from vigorous clipping in winter, pruning after spring’s flower flush, and even more pruning in late summer if we get rain. 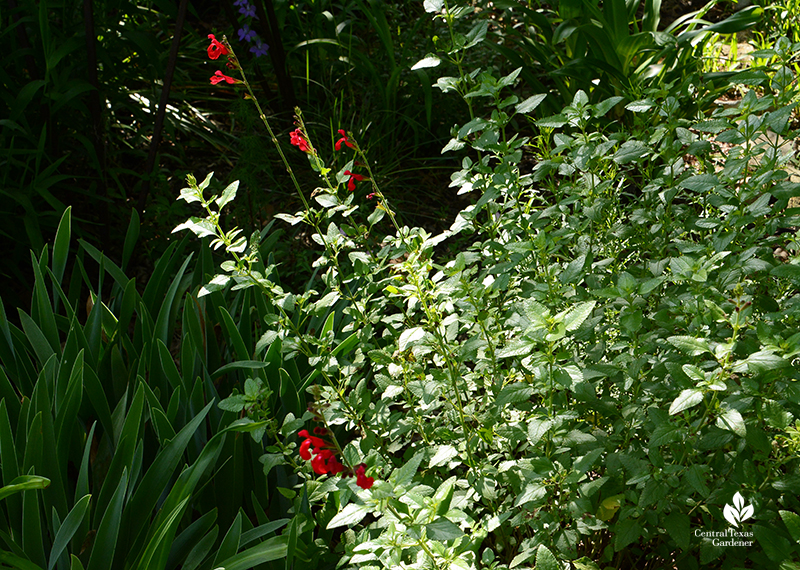 My bay laurel had towered over the shed since I’d been negligent about pruning. After the freeze, I hired out to chainsaw it down to green growth and get it off the roof. It’s rebounding so fast that I vow—and you have it in writing—that I’ll be better about keeping up with it. Native Barbados cherry is returning slowly, but it won’t take long to fill out. 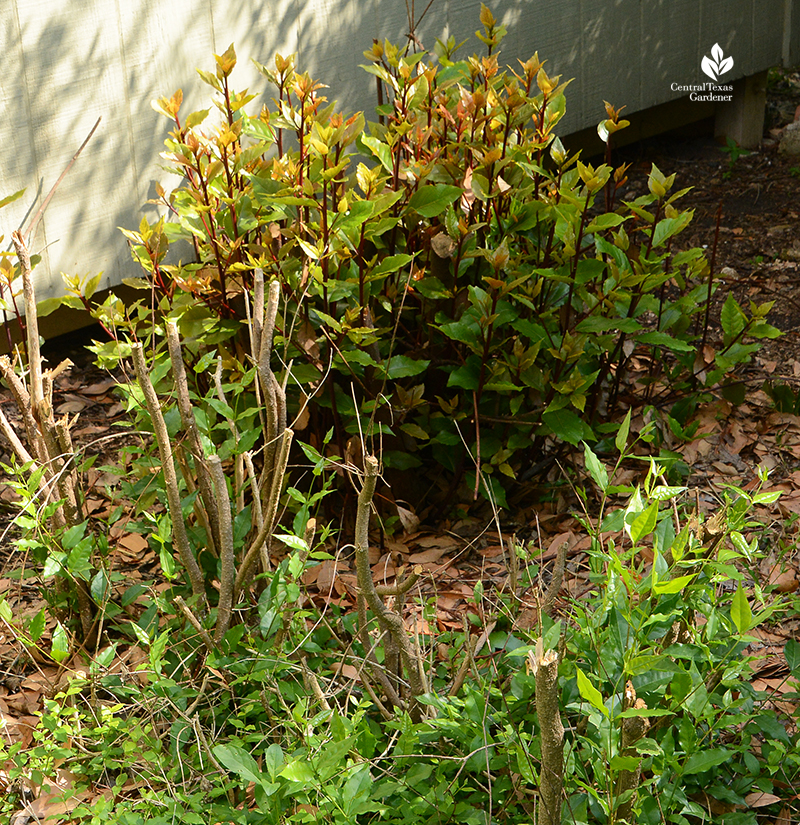 Silver bush germanders took a hit, but mine are coming along just fine. They really needed shaping anyway! To the left, ligularia bounced back fine. To the right, sparkler sedge is still thinking about things. 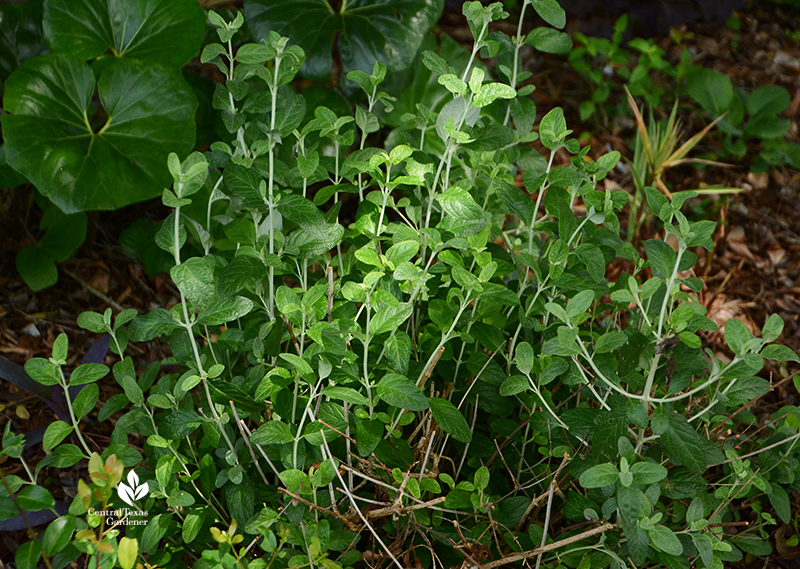 But, native plants danced through February’s blast. Winecup blossomed the best in years, while native perennial Zexmenia (now classified as a Wedelia) jumps in. 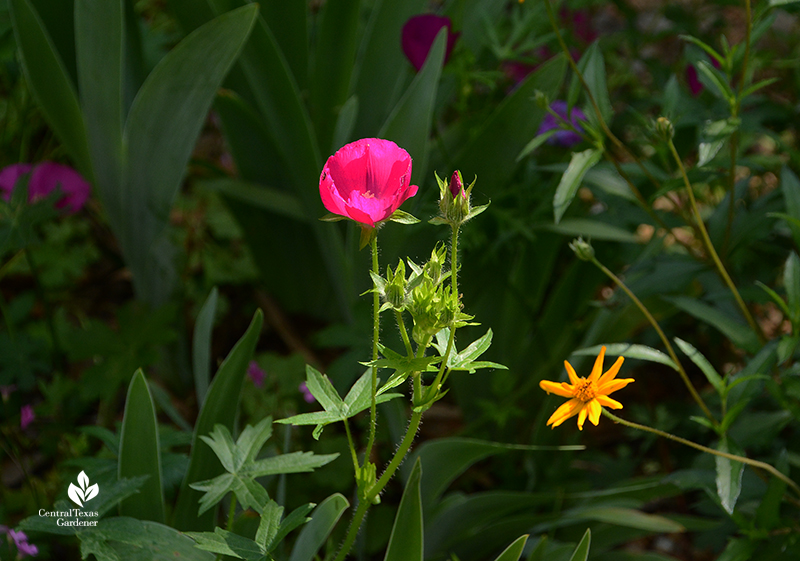 They crowd the path shared with native inland sea oats and equally durable non-native Jerusalem sage and daylilies leaning over to join the party. 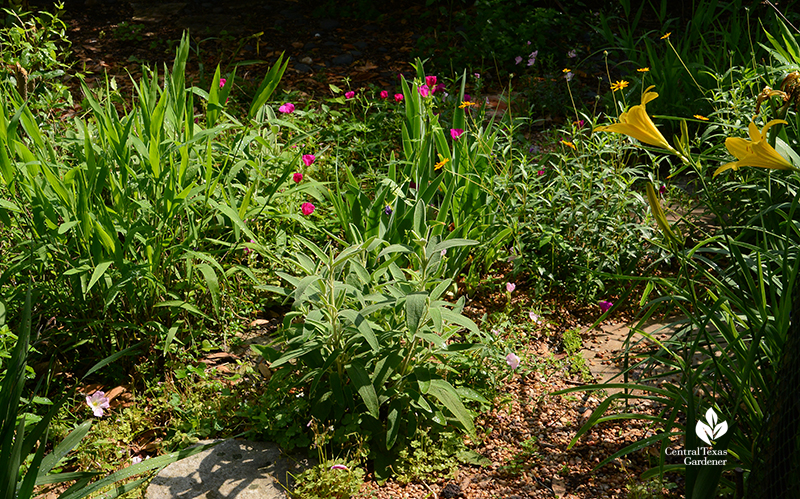 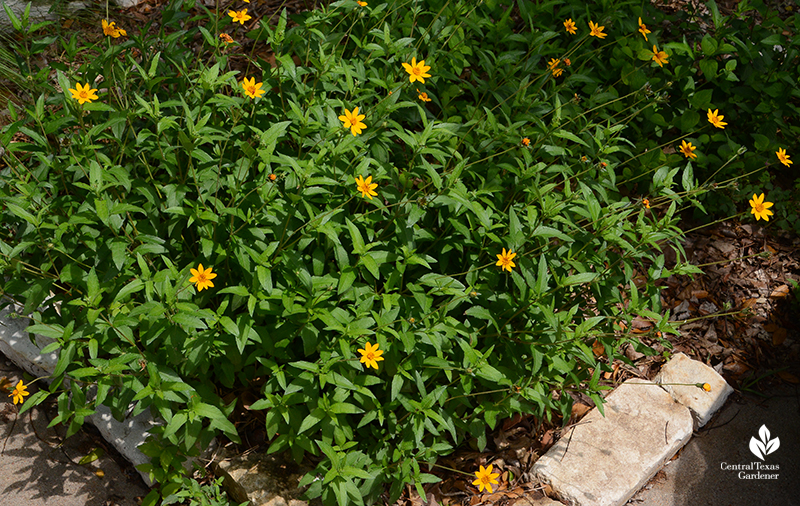 Many pollinators love it, but this bee gets extra points for hanging on during an especially energetic breeze. 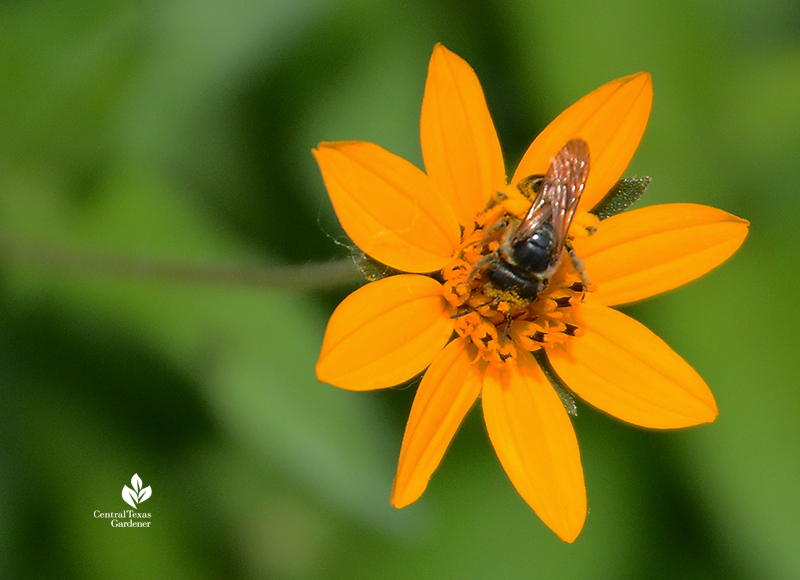 Maybe it was the same bee atop native perennial yarrow until I showed up and it wanted me to buzz off. 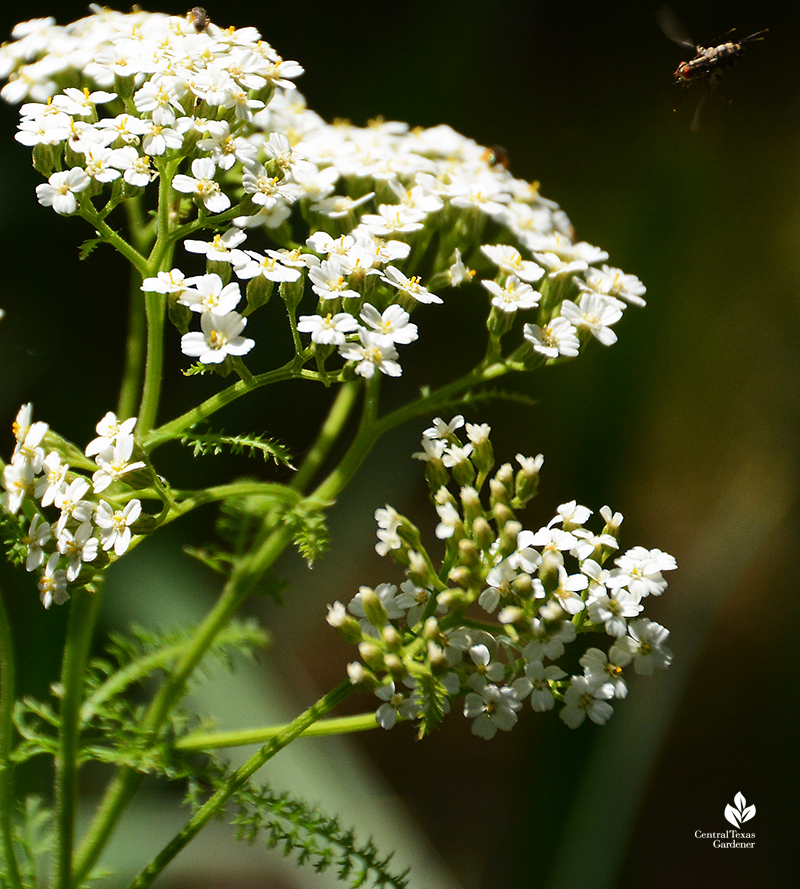 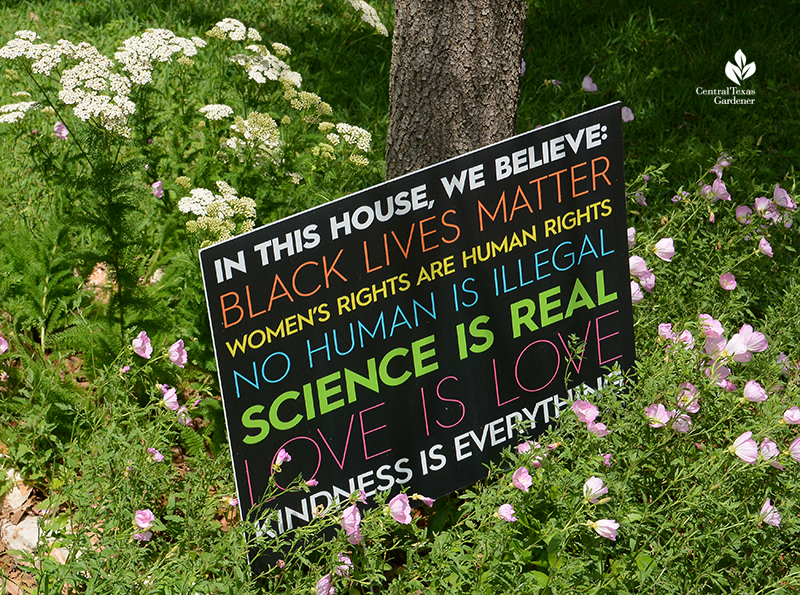 Native rusty blackhaw viburnum looks better than ever as a chain link fence screen, enticing lots of pollinators to those fluffy flowers. This stretch against a neighbor’s yard gets high-contrast morning and afternoon sun for a few hours each round. 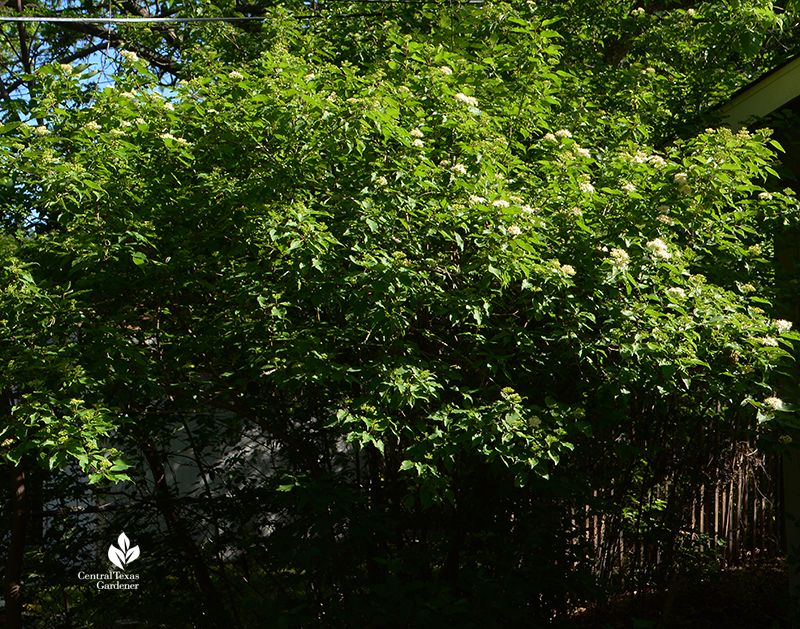 Underneath, native evergreen White avens (Geum canadense) populates this woodland edge spot. Even with little irrigation in summer, it remains evergreen for me. 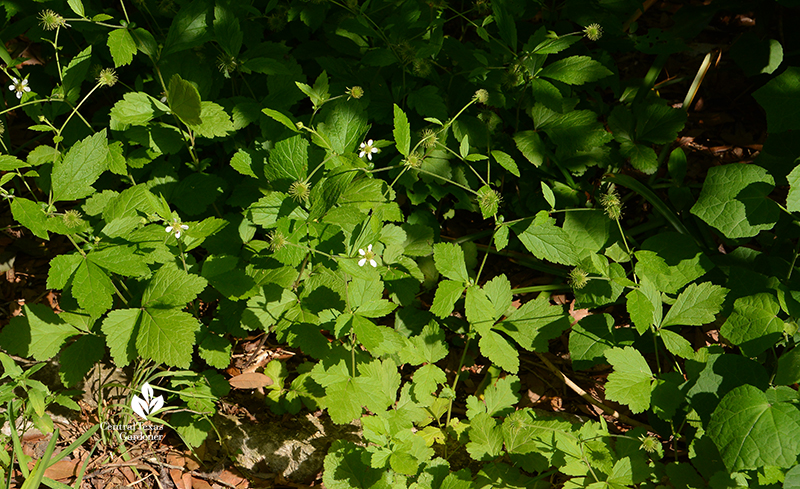 In the same sun/shade conditions, native chile pequin promises hot fruits this summer. Never have I lost one to freeze, but now I know that it can handle 9° for me. 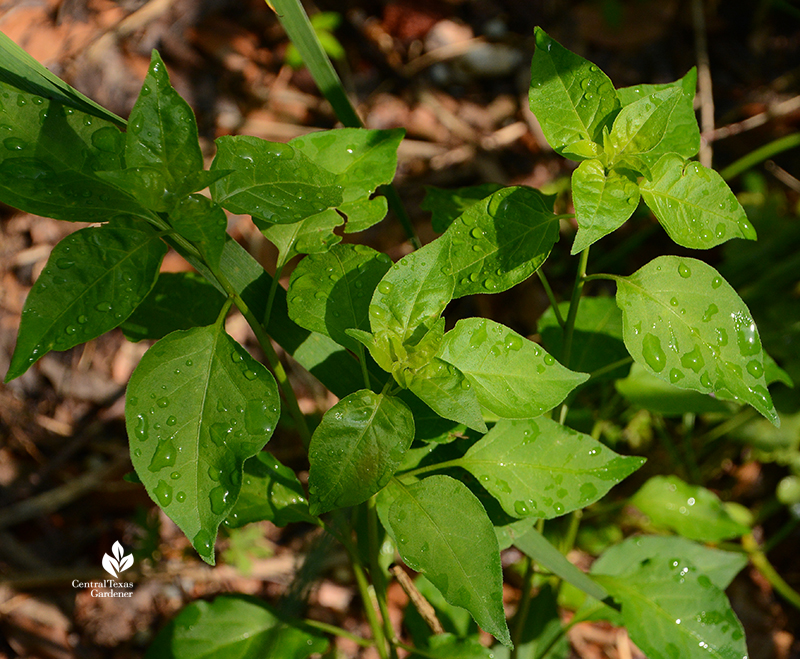 At the Wildflower Center’s fall sale, I’d nabbed a few more Texas bluegrass (Poa arachnifera) that remained green under the snow. Although tiny, they celebrated their new forever home. 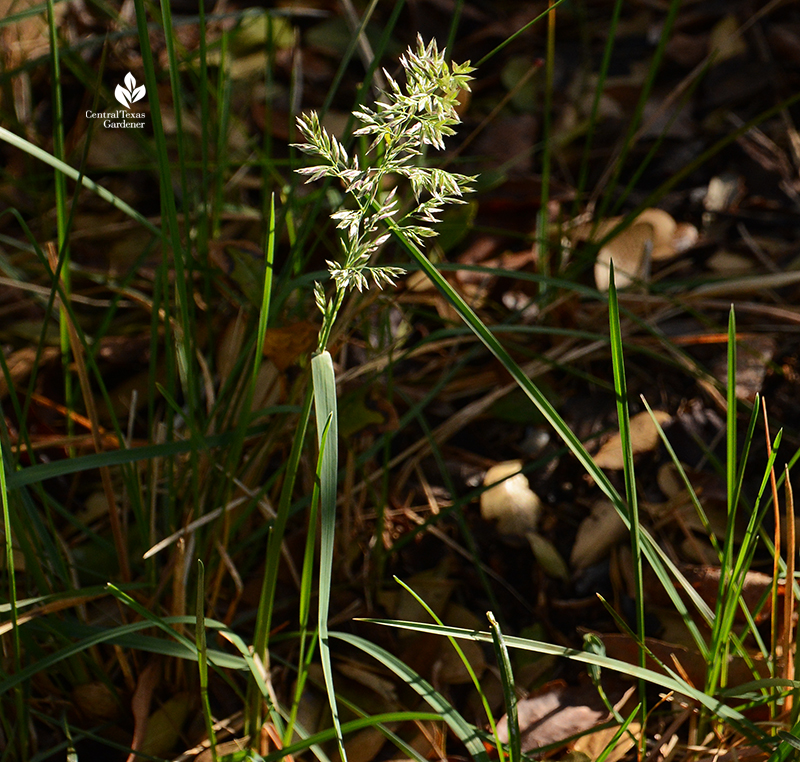 Native snake herb (Dyschoriste linearis) borders many of my beds that alternate shade with intense sunlight. I feared its survival, but their roots are established and it pumped back fast. This one spreads with vigor, which is just what I want for an easy care groundcover. 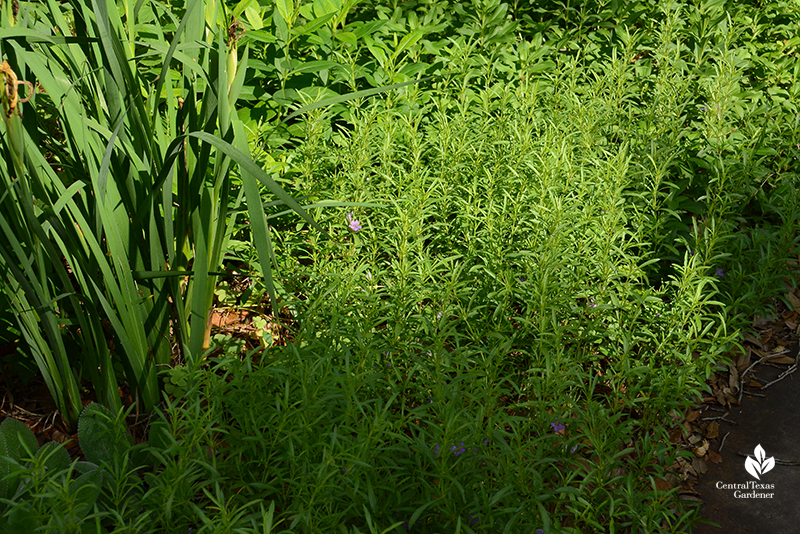 Its springtime lavender flowers are tiny to attract small pollinators. 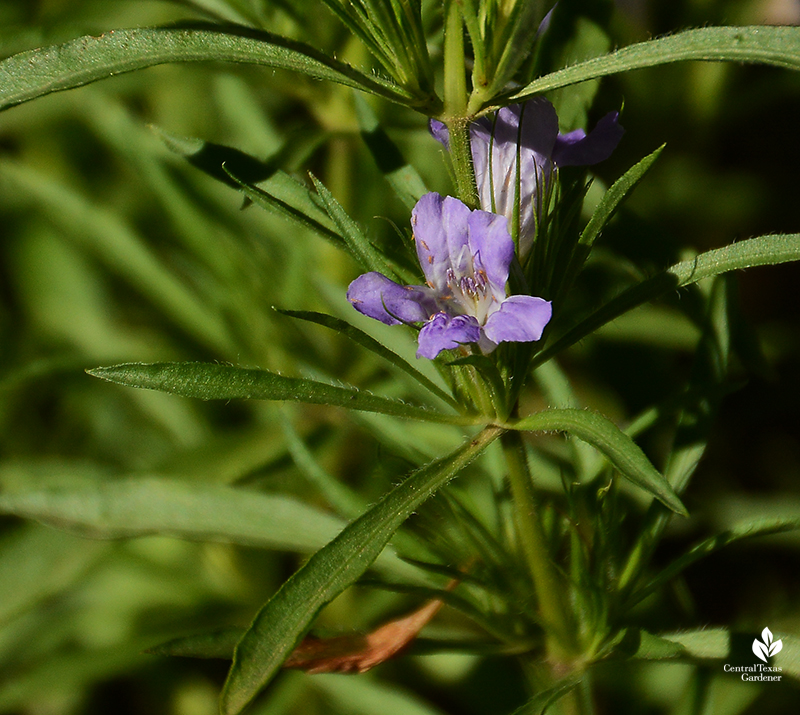 In another bed it companions with Mexico-native mountain pea (Orbexilum sp.). Both are drought-tough evergreens that spread with vigor. 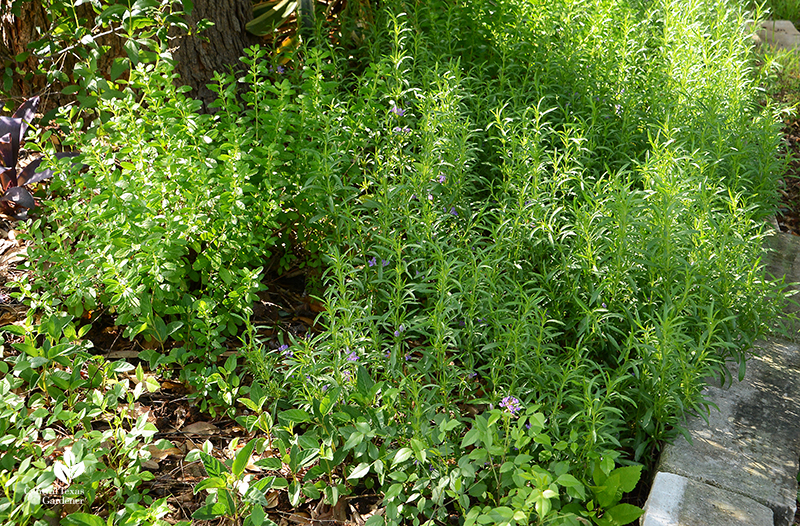 NOW, to celebrate our native plants, here’s an event you don’t want to miss on May 13! The Wildflower Center and Austin Classical Guitar have collaborated in an online multimedia presentation titled “Flowers of Life.” Brazilian musician, composer and improviser Gabriel Santiago joins Director of Horticulture Andrea DeLong-Amaya who will read selected texts, including from Lady Bird Johnson. It’s free but you must register. 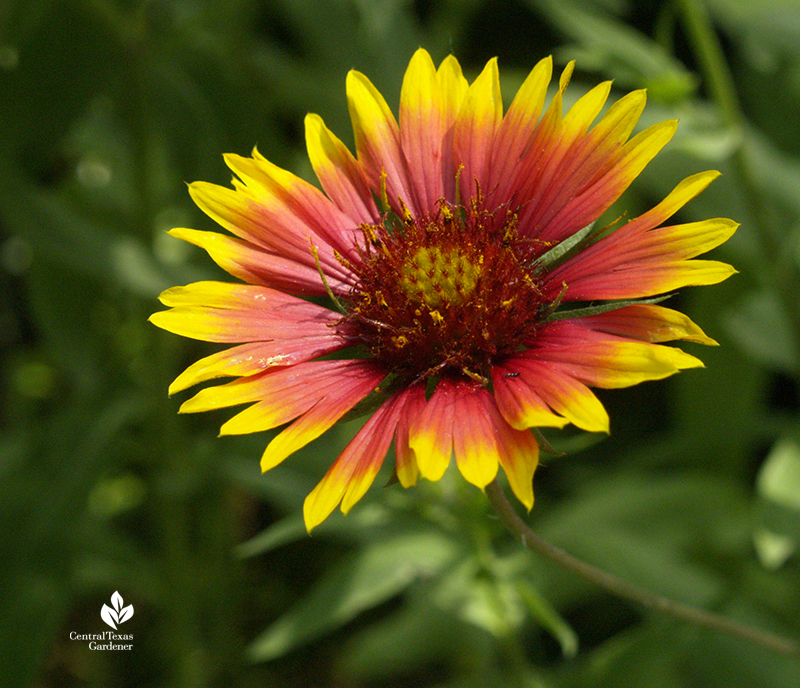