Spring Heirlooms in Spotlights and Shadows

When I started gardening, an experienced landscape designer told a story that sticks with me. He wondered why his shade-loving plants looked so bad when he got home from work. Then one day, he stopped in for lunch and saw the answer. At noon, an intense shaft of sunlight slammed into plants that were geared only for shade. I’ve been caught on that one, too. Luckily, these no-name daylilies I planted long ago can handle the shadow-to-sunlight swings in this strip along my patio. 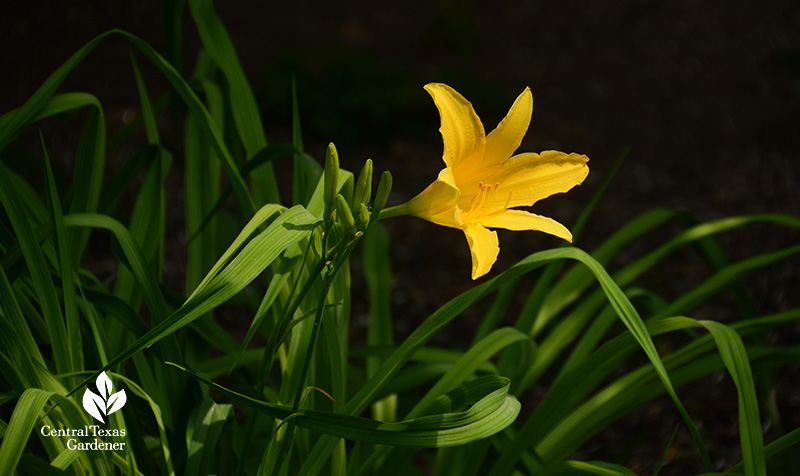 In morning, soft sunlight glances at this bed. The real drama begins about mid-day when its spotlight sharpens the gradual scan. Johnson’s amaryllis—also called St. Joseph’s lily—chimes in during late April. Like the daylilies, their strappy leaves are evergreen except in harsh winters. 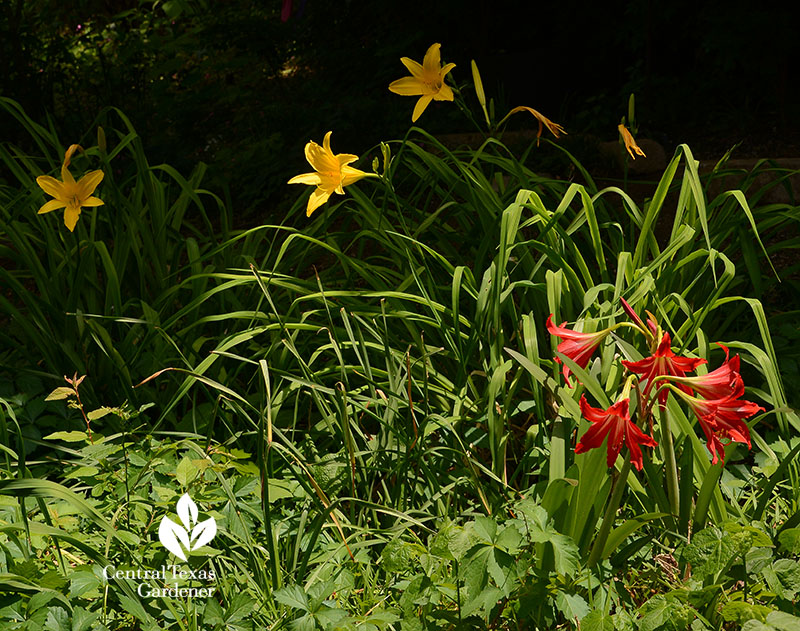 Johnson’s amaryllis is a hybrid dating to the early 1800s, often popping up unexpectedly even in abandoned former home sites. Along a fence, this one gets morning sun, albeit not much of it once the nearby tree leafs out. 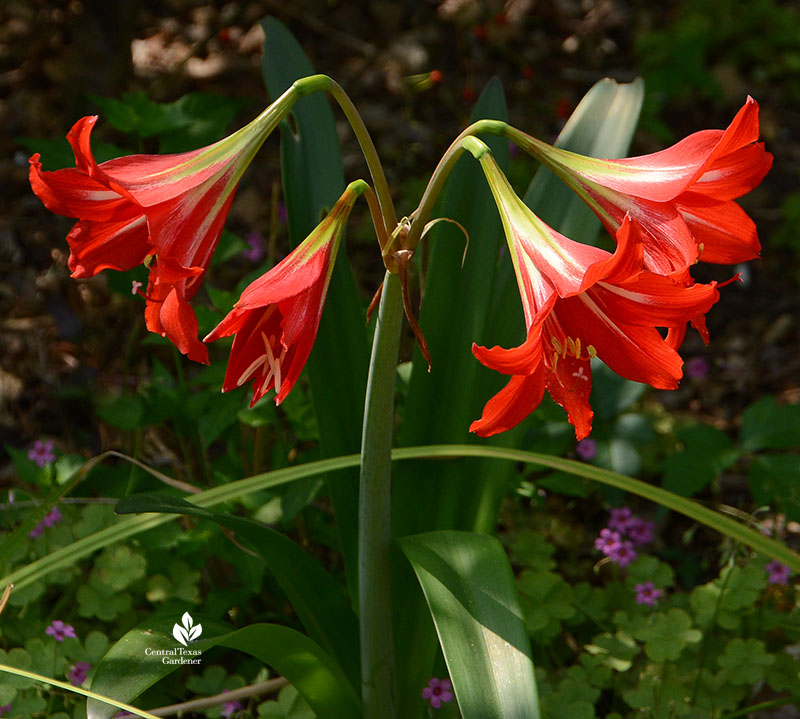 On Central Texas Gardener’s Facebook page, viewers shared their lovely pictures and stories. Some were even lucky enough to get divisions from their grandmothers.

My yard’s back stretch gets morning shade and late afternoon sun. It’s either photographic ho-hum bland or full blast sunlight! Masses of stately spuria irises started with a few divisions from a friend after I dug up all the St. Augustine grass along here. Native inland sea oats seeded themselves in a delightful foreground mass. I love to add silvery-gray foliage as a foil, and Jerusalem sage does it well with fuzzy leaves and deliciously fragrant yellow flower puffs. 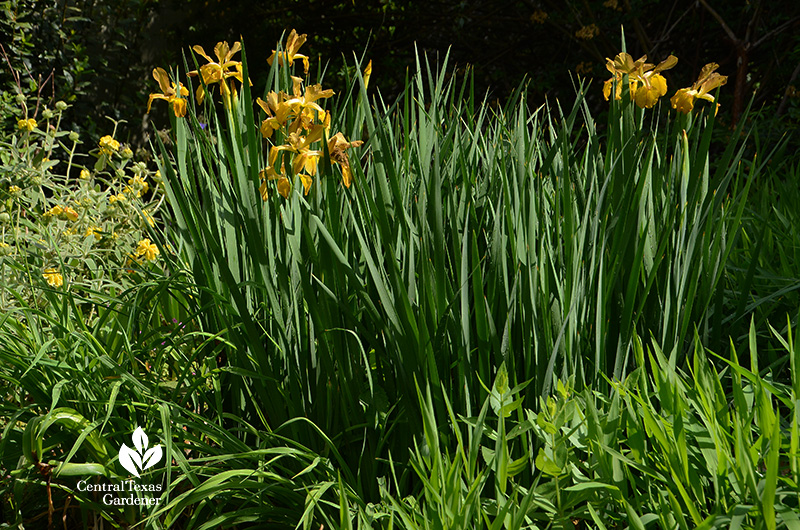 Jerusalem sage is deer and drought resistant. Since it wants good drainage, too, I added pea gravel and decomposed granite when I dug out the lawn grass to create a cove next to the shed. Pink evening primrose rambled in on its own. 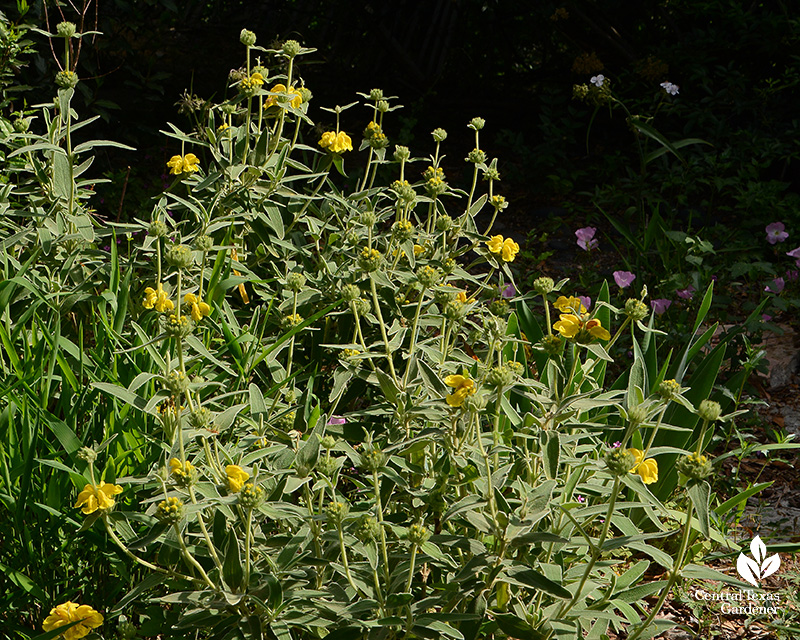 Right now, I’ve got a happy confluence of color around the cove’s entrance arbor that formerly hosted heirloom roses. I divided magenta Byzantine gladiolus to companion with divided daylilies and the Jerusalem sage. Inland sea oats planted themselves to tie together both sides of the arbor (plants are so clever!). The feathery plant at the left is a native standing cypress—a hummingbird fave—that started as a tiny seedling that a friend dug up last year. 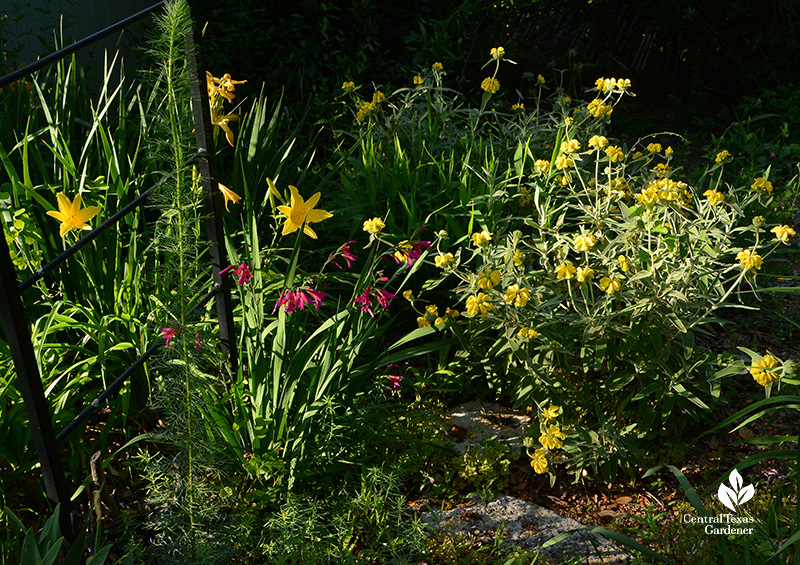 Byzantine gladiolus is an heirloom plant pass-along of a few corms that I’ve divided over time. It goes dormant in hot weather but returns every spring. 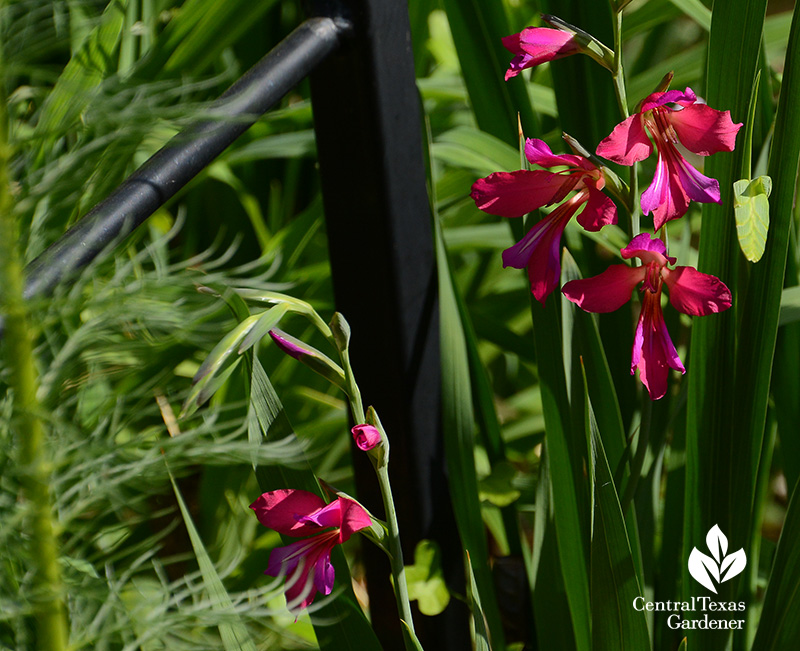 At the cove’s back, I planted a Lady Banks rose years ago to hide a chain link fence. Then I added bay laurel. They both took a big hit last winter. Although the bay laurel rebounded quickly, the rose looked pretty iffy. Recently it reclaimed its dominance, but I figure it needs another year of remedial pruning. 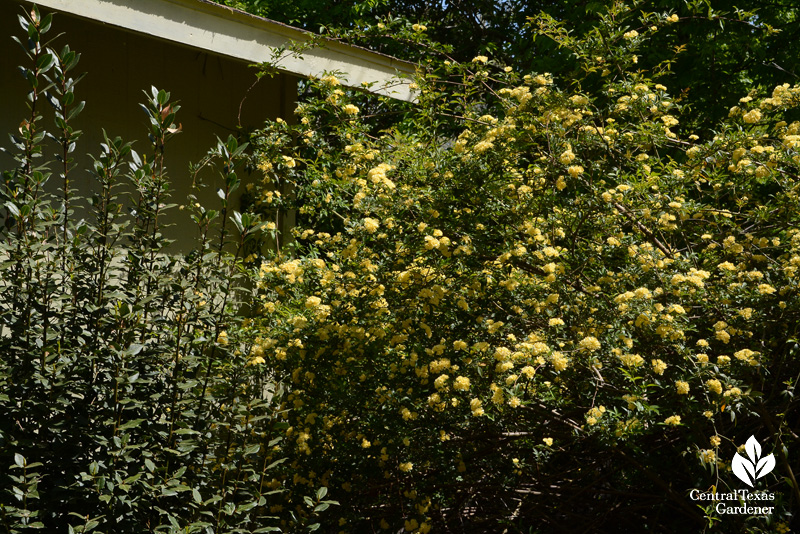 Way back when, I planted a white spirea (spiraea) shrub at the shed’s corner after admiring its white flowery clouds in long-established—even neglected—yards. I’m not sure that I’d plant it now, and in fact, we whacked it all the way down one year hoping to kill it. Instead, it came back so beautifully that I spared it the shovel. 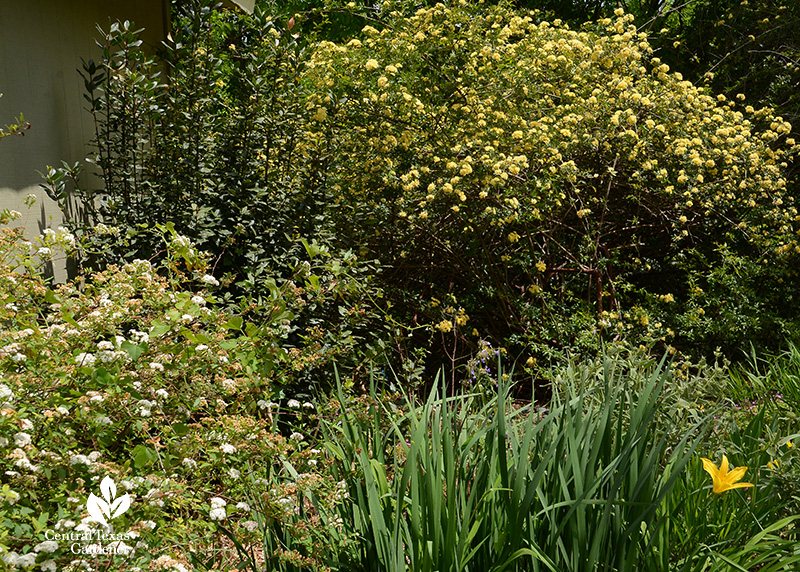 I also fantasized about a rose embracing the shed’s doors. I haven’t followed through with the attention that sort of sculpturing requires, so climbing Cecile Brunner kind of does her own fragrant thing. 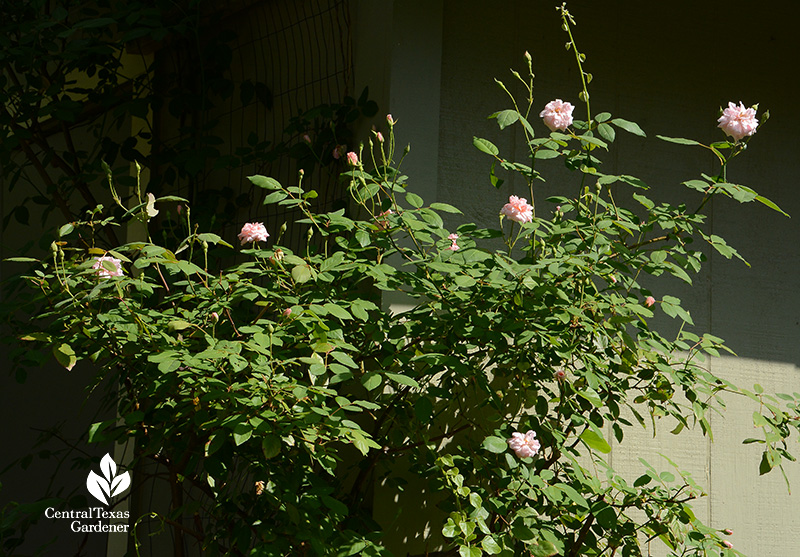 Crossvine gave me sort of a miss this year, but it’s sure been glorious all around town, a welcome sight to returning hummingbirds who love those deep-throated flowers. 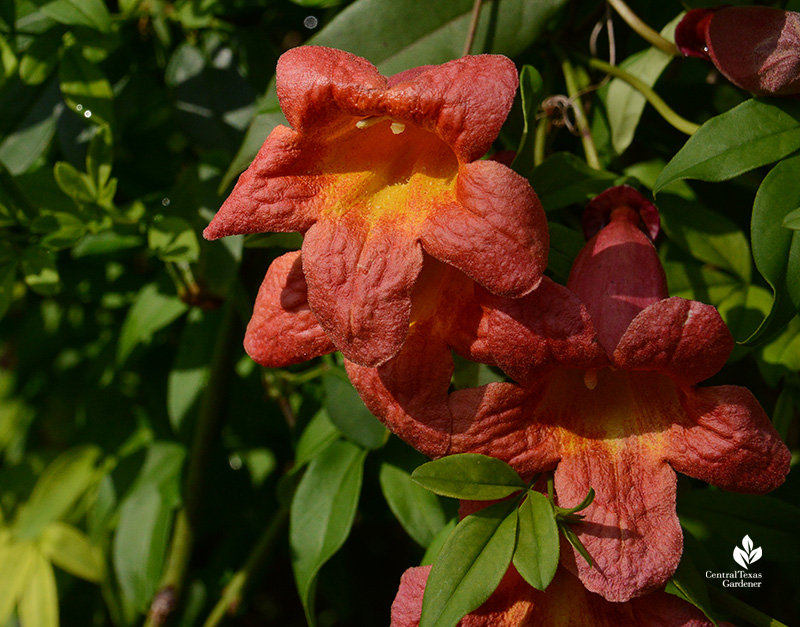 Native ‘Tangerine Beauty’ was recently named a Texas Superstar by Texas A&M AgriLife for its reliable, resourceful performance around the state. “‘Tangerine Beauty’ was discovered growing in a garden in San Antonio by Texas horticulturist and garden writer Scott Ogden in the 1980s. It was subsequently named and introduced by the North Carolina State Arboretum in 1993,” Adam Russell writes. 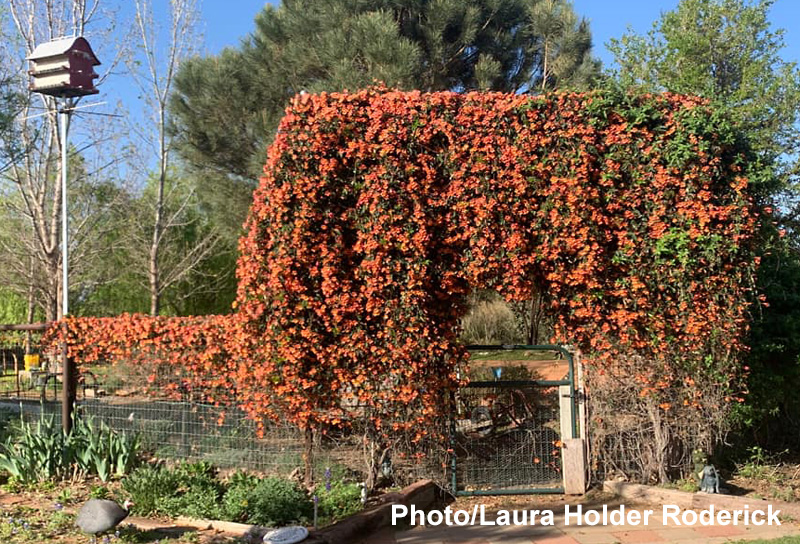 The real buzz the past few weeks has been yaupon holly’s miniature flowers. They’re so small that they’re easy to miss, but the bees sure do not! 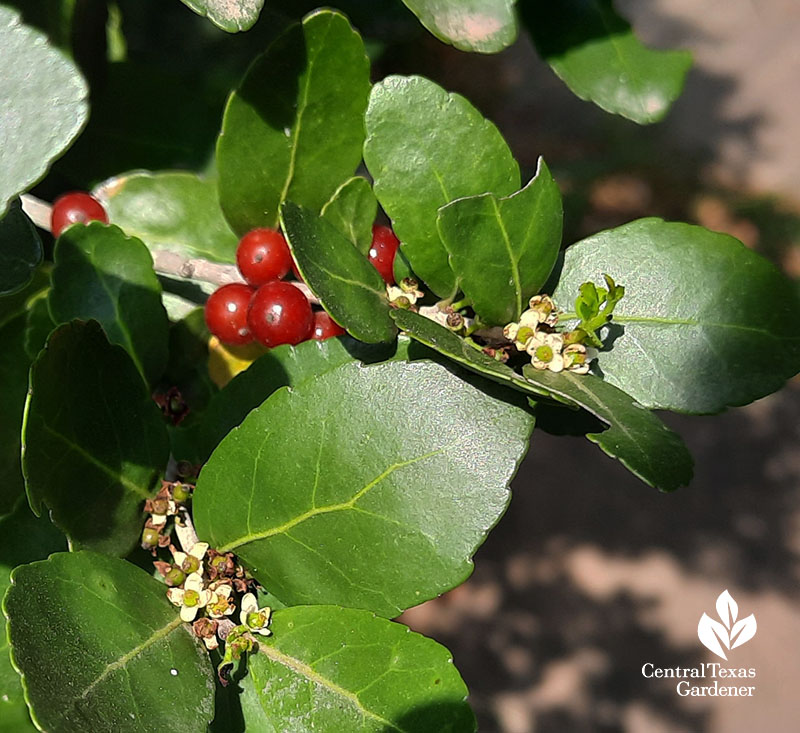