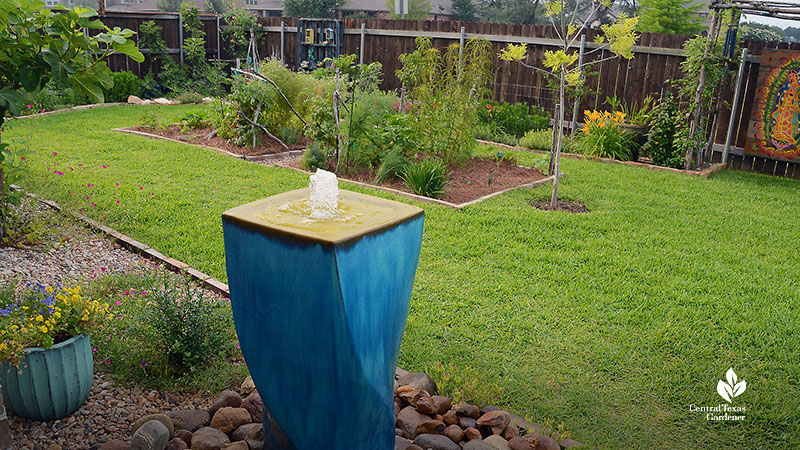 “It’s not where we wanted them to grow, it’s where they like to grow. So, I just play with them and make them happy. I think this is the secret of the success of the garden to make the plants’ garden. After all, they make us happy.” Ana Lopez 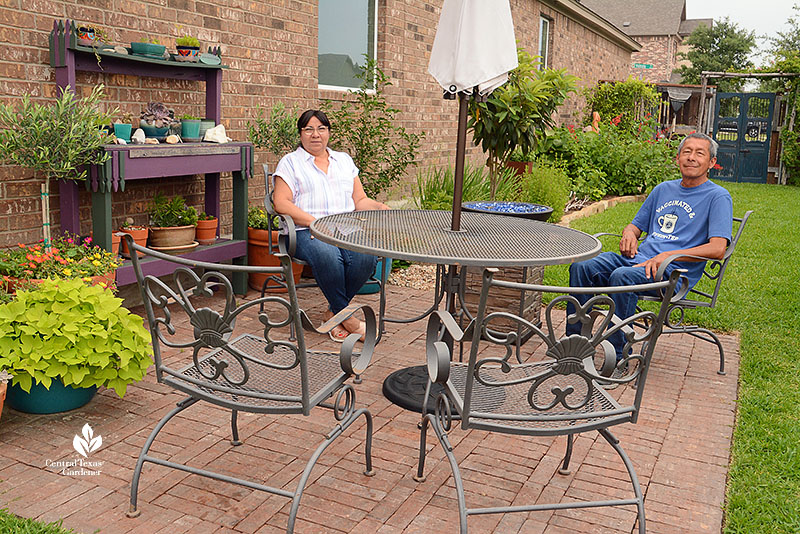 I met Ana Lopez during the pandemic when she emailed a few pictures of the charming garden that she and husband Julio steward in Leander. Since location taping was on hold, I inserted a few of her flower images into an online video that Daphne Richards, Travis County Extension Horticulturist, recorded from home. 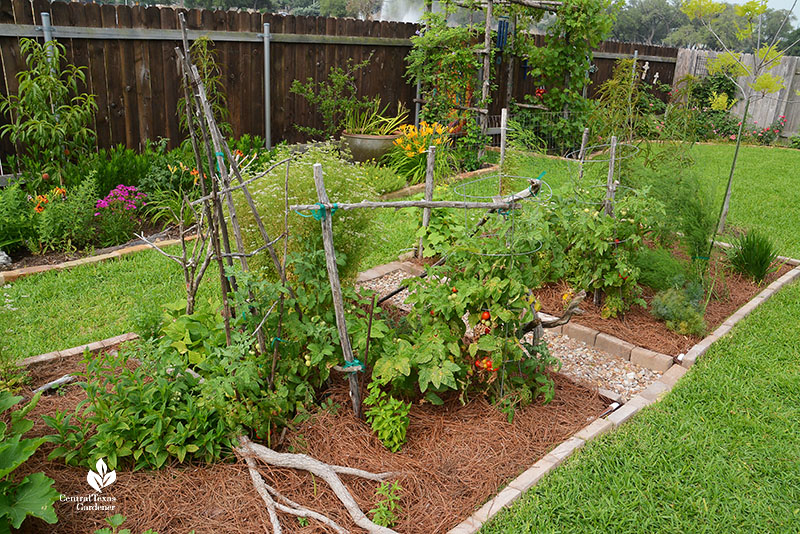 Finally in May, they opened their back gate to Ed Fuentes, Robert Moorhead and me, where we all stopped in downright awe. In just four years, Ana and Julio turned a blank construction lot into the downsized garden of their dreams. 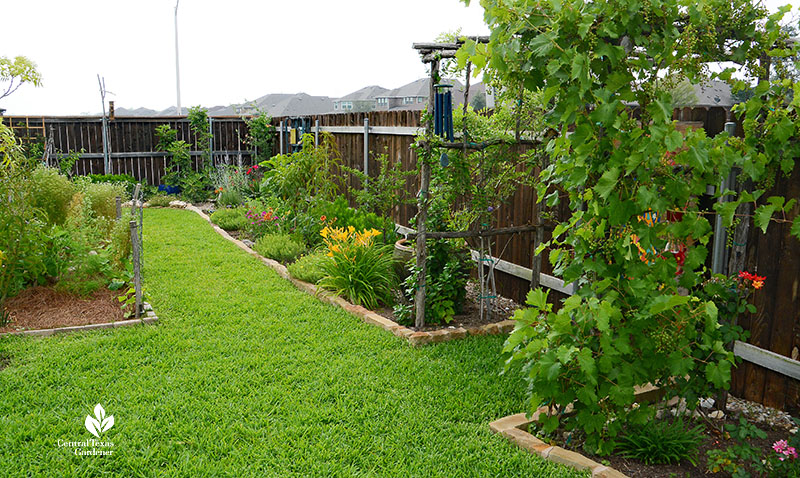 They’ve always tended extensive gardens, but once their sons headed down their own adult paths, Ana and Julio decided to move to a smaller house. Still, they wanted enough room to grow fruit trees, perennials, and herbs. They swapped garden design ideas a year before the house was even built. 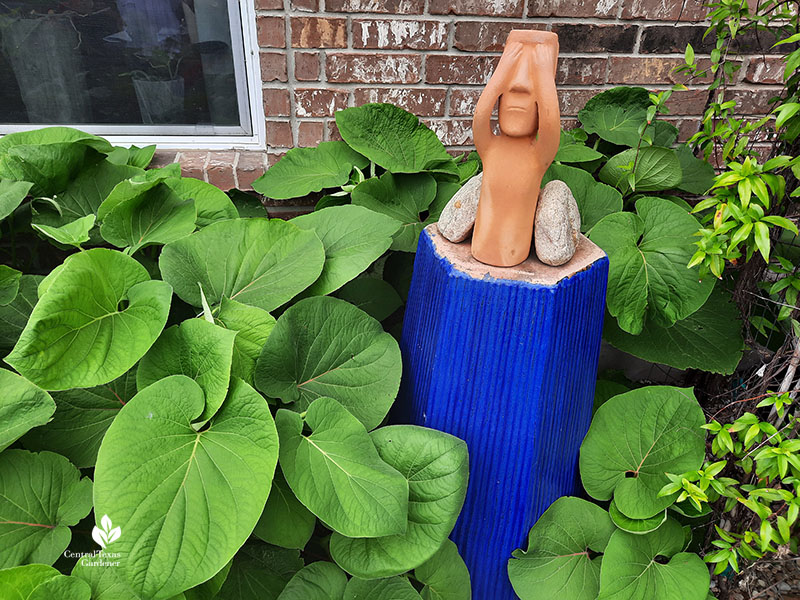 Even though they brought in a good quality soil mix to amend the heavy soil, I’m convinced that Ana’s the secret behind every thriving plant, including Hoja Santa. “I think I have a green thumb ’cause my mom did,” she said. 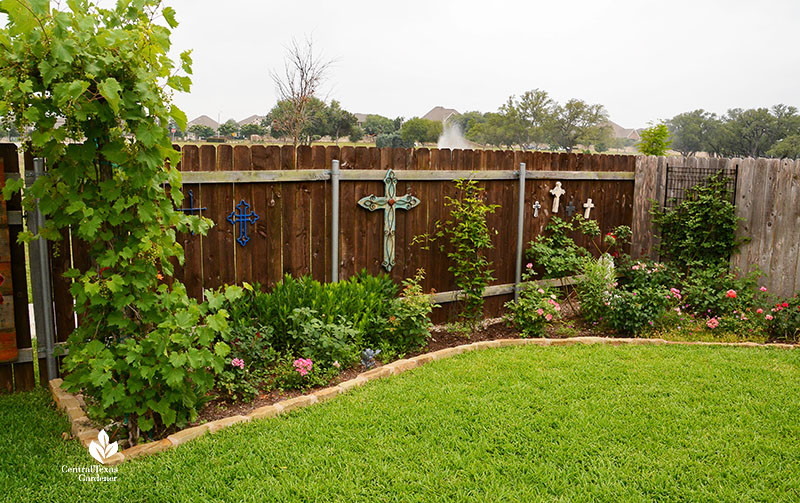 Ana loves roses, so their bed was one of the first they built. She’s added clematis and various perennials that attract butterflies and bees when flowering. 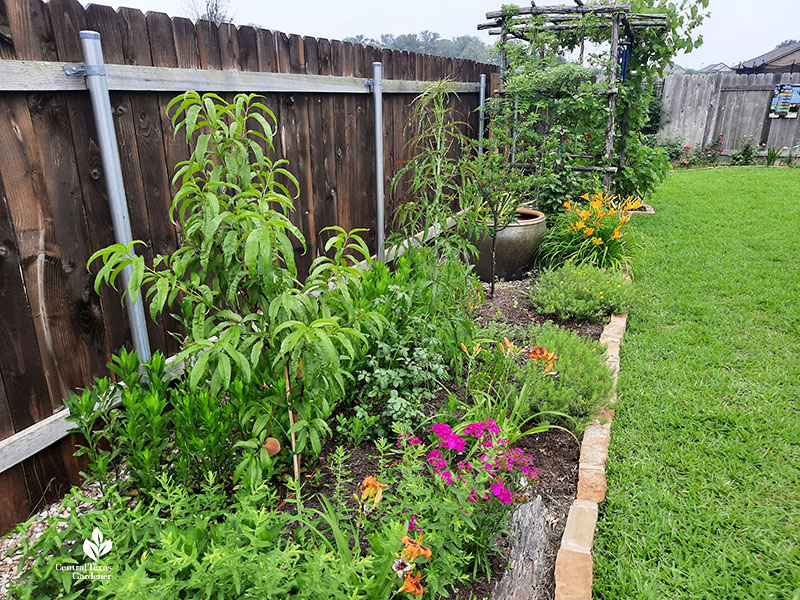 As they continued bordering the fences, they mixed plants of all kinds. Ripening peaches join fall asters, dianthus, and daylilies on the other side of the grape arbor. “And then if they do good in one spot, good, if they don’t, they just move around,” she said. 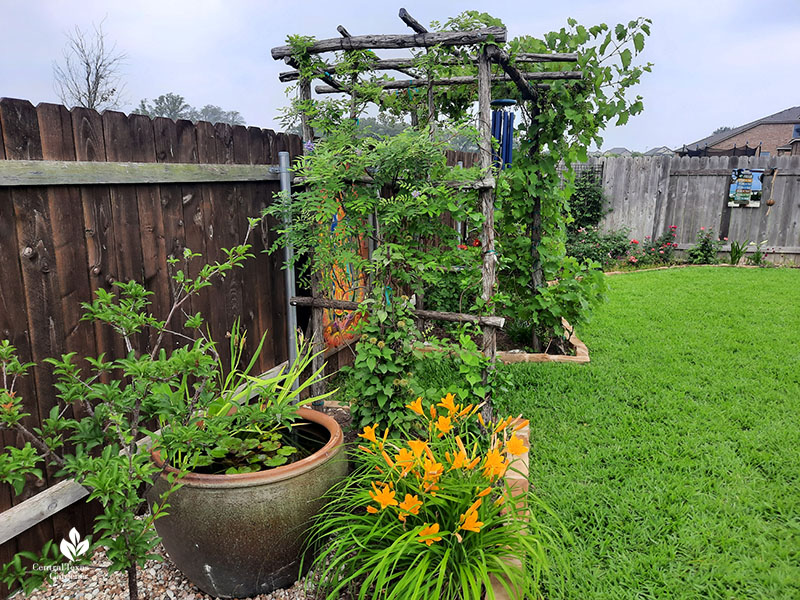 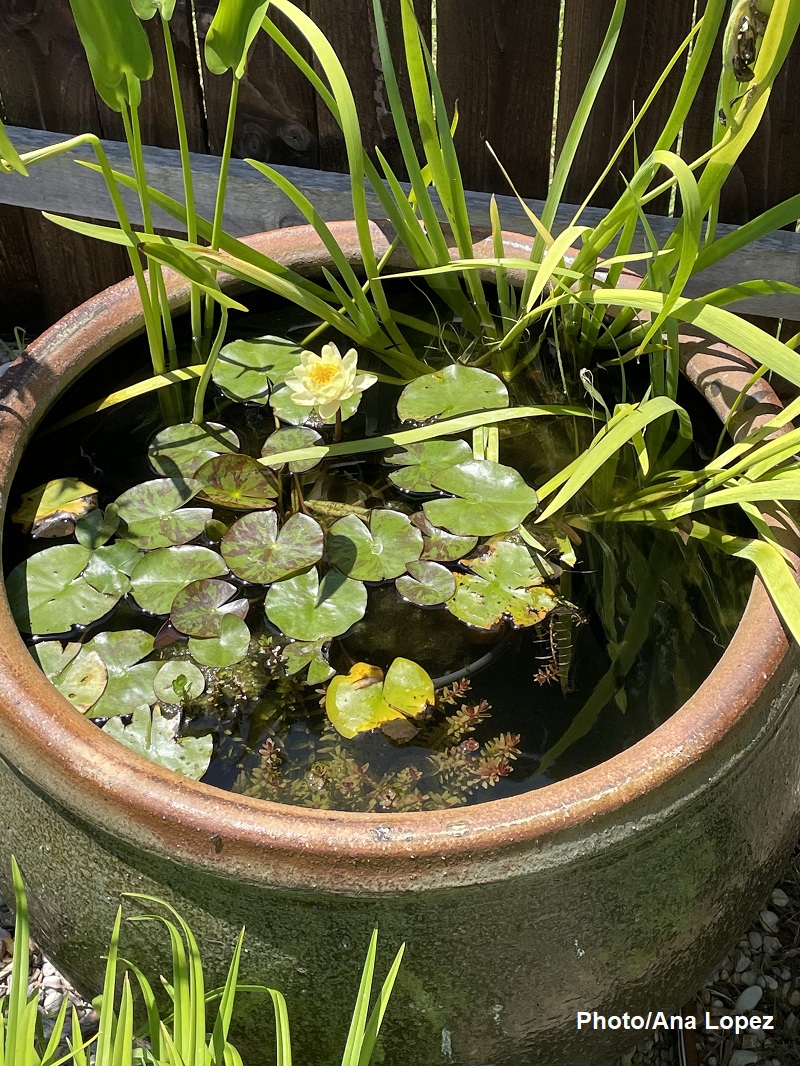 Long ago, they gave up on ponds since raccoons trashed them nightly. Still, they wanted to keep this water lily, part of their family for many years. Solution: a water pot! Ana sent this picture when it bloomed in June. 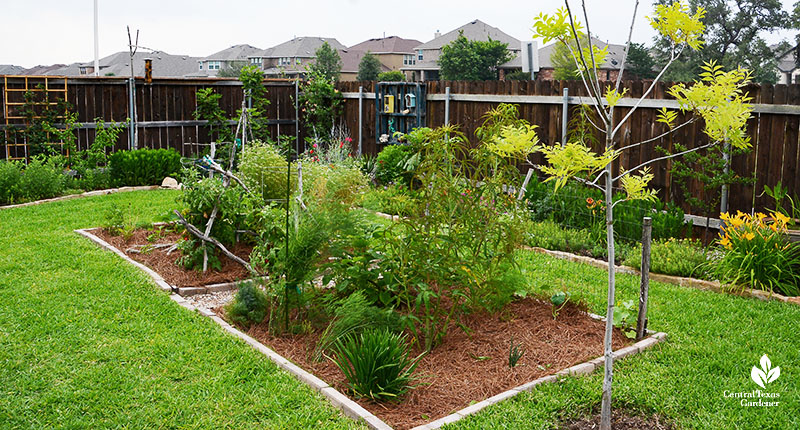 Ana claims that she isn’t a vegetable gardener. Yet, after a neighbor admired the garden but asked why she didn’t have a vegetable bed, Ana and Julio dug out a central island where harvests abound. 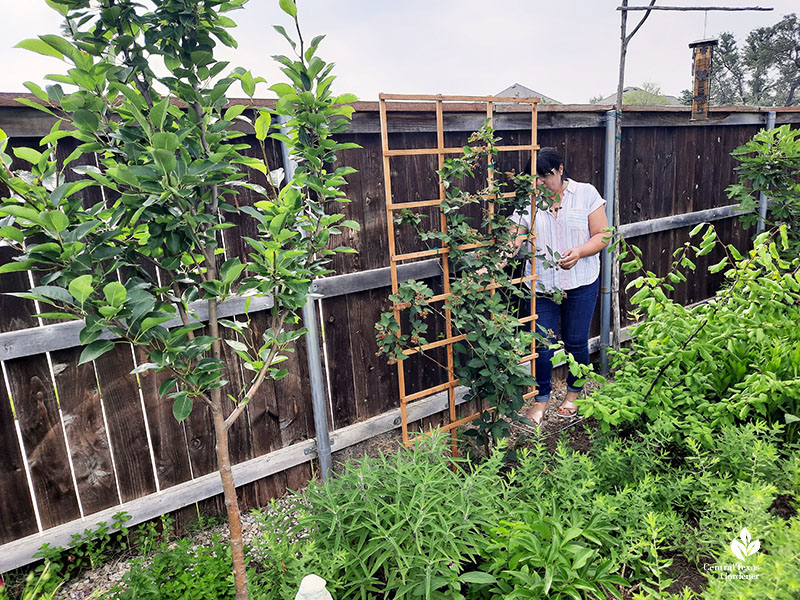 She loves to cook, so on another fence, she planted a fig tree and raspberries, along with flowering perennials for wildlife. Beyond, spearmint (her mom’s favorite) gleefully spreads, along with thyme, one of Ana’s favorite ingredients. 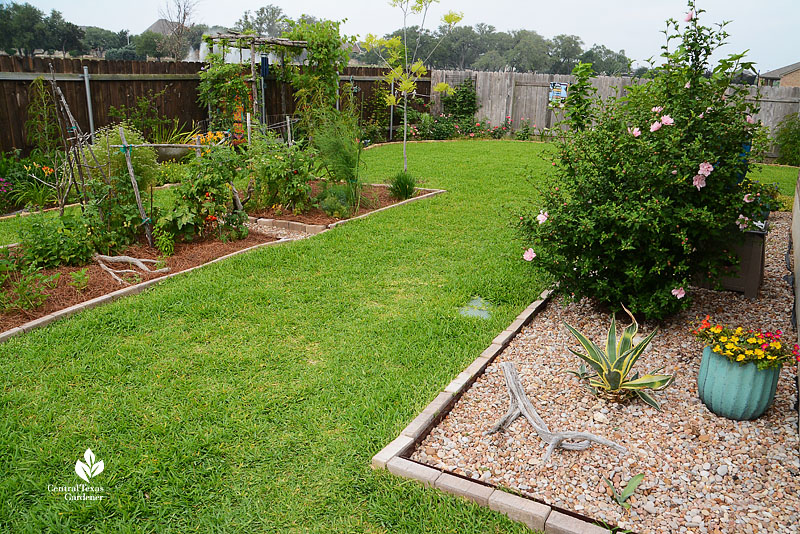 They mulch with bark, pine straw or small river rocks, depending on the plant. Succulents prefer rock mulch, but in this bed, agave and flowering shrub Rose of Sharon (althea) are perfectly content together. Neither requires much water. 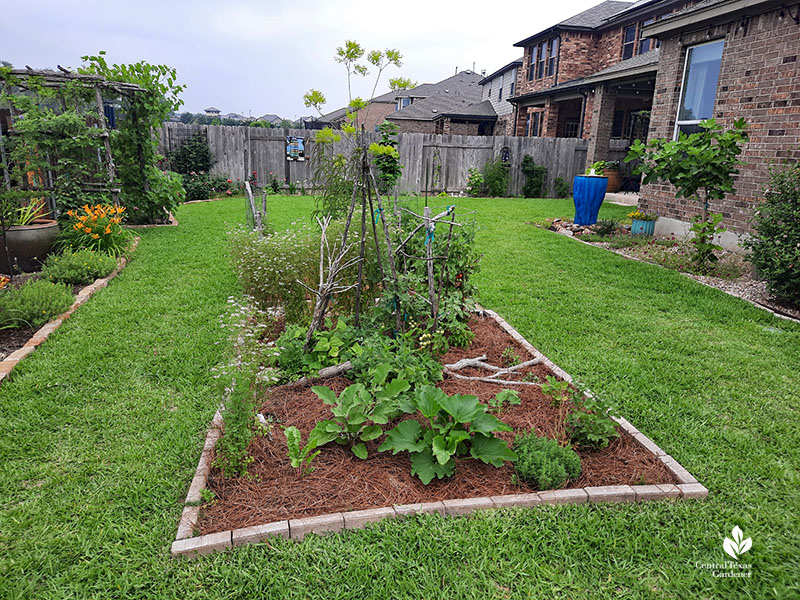 Ana and Julio repurpose or recycle anything they find, including tree prunings for trellises and other plant supports. 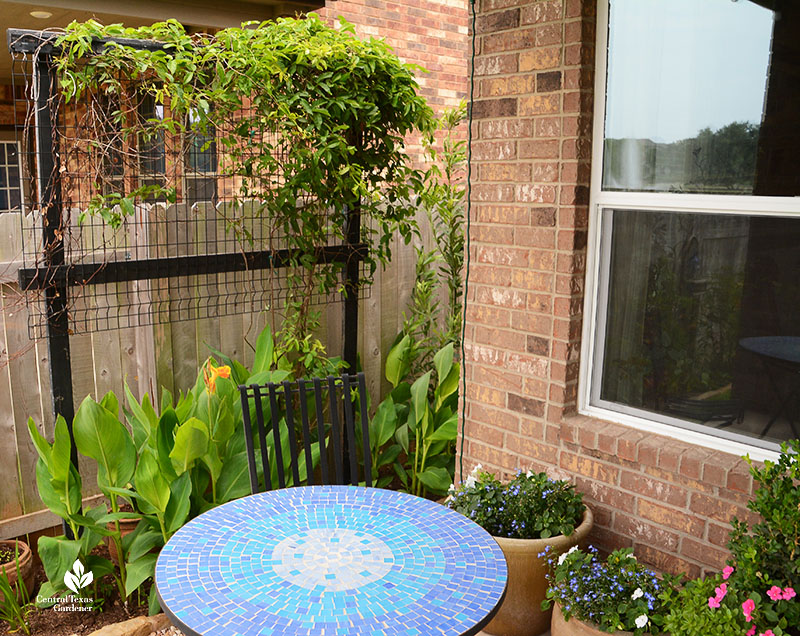 For a privacy trellis along their patio, Julio fastened dog kennel panel to lumber scraps and Ana planted native crossvine. In blooming season, they can sip morning coffee and watch hummingbirds. 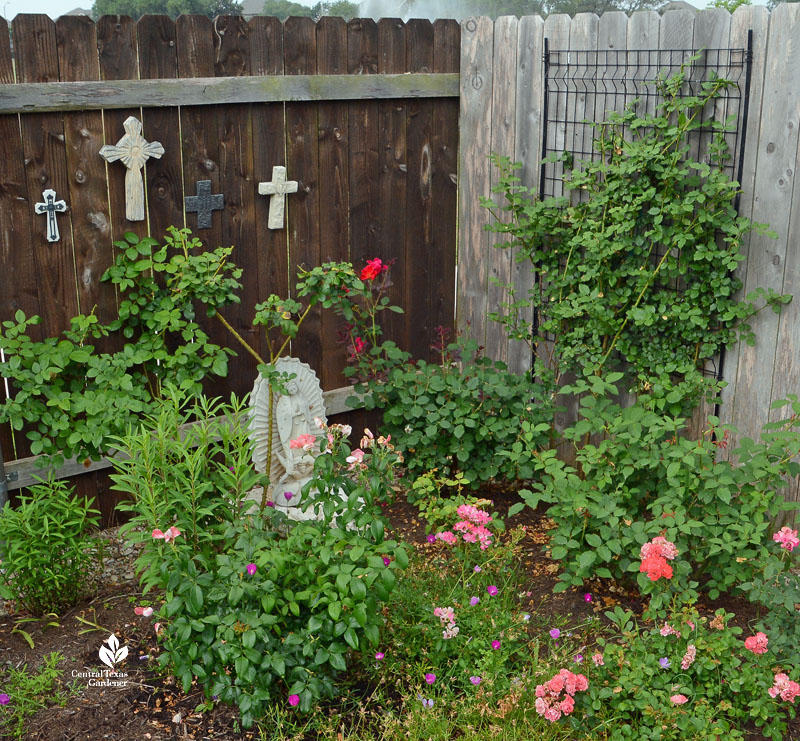 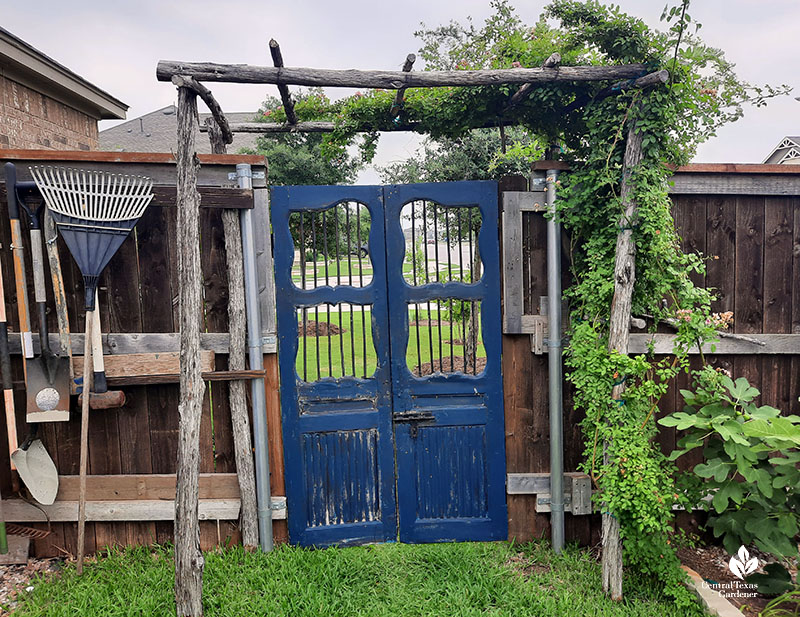 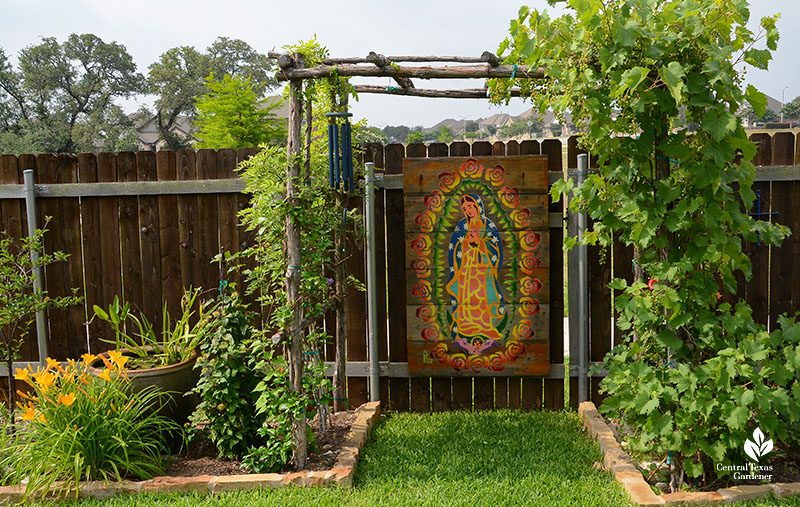 Julio wanted a grape vine and found just the spot at the back gate. 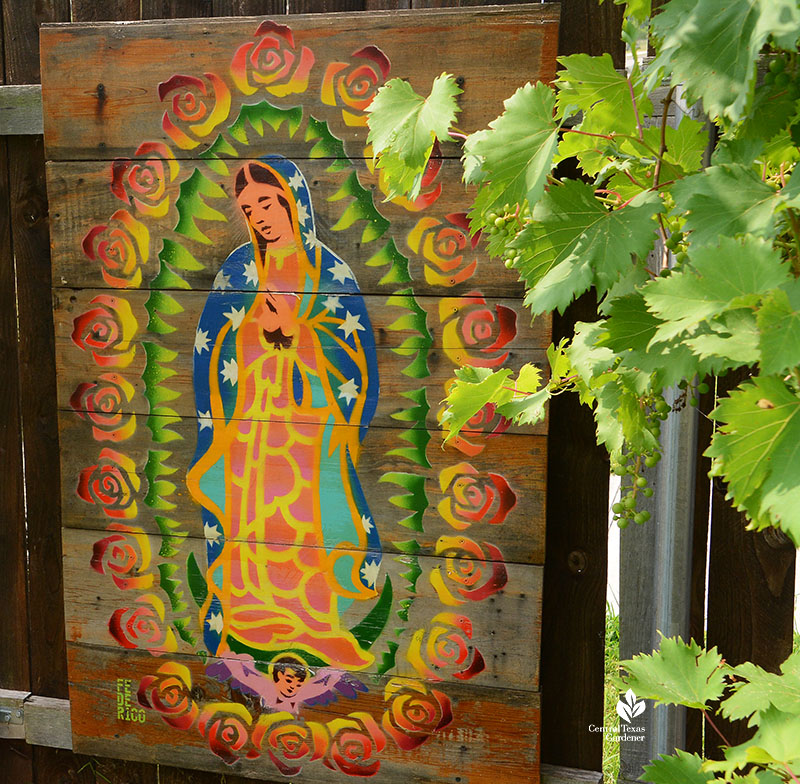 Their son, knowing their love of Our Lady of Guadalupe, commissioned a gorgeous panel from renowned Austin graffiti muralist, Federico Archuleta. 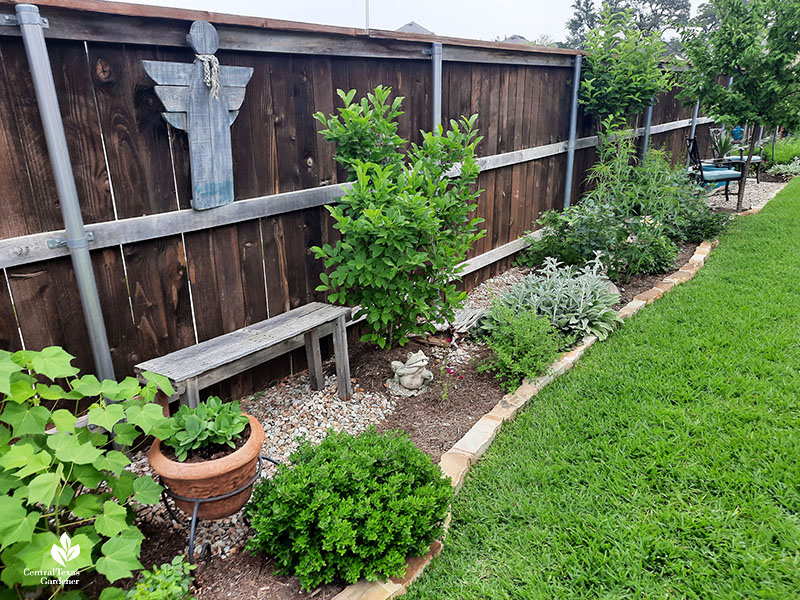 After Julio dug up lots of grass installed by the builder, he recycled the sod’s wooden pallets, completing his projects with scrap lumber. 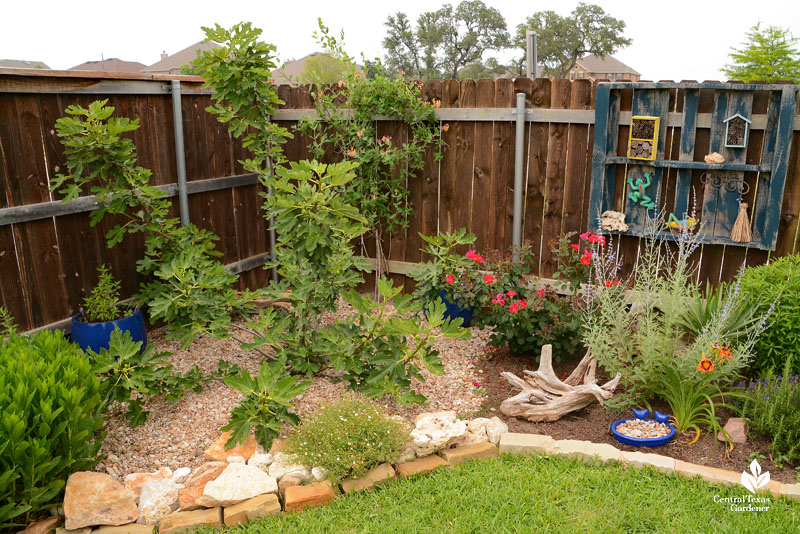 In a corner anchored by a young fig tree, started from cuttings, he built a fence display case from part of a pallet. Then they added mason bee houses. 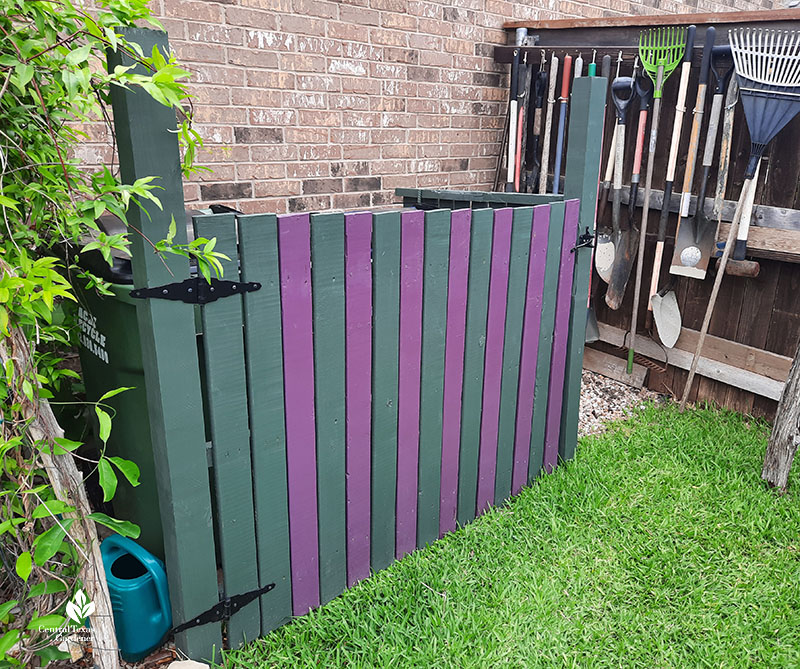 Pallet slats beautifully disguise the garbage and recycling bins. “I like to recycle, but I also like to have some color because we like to see bright colors,” Ana said. 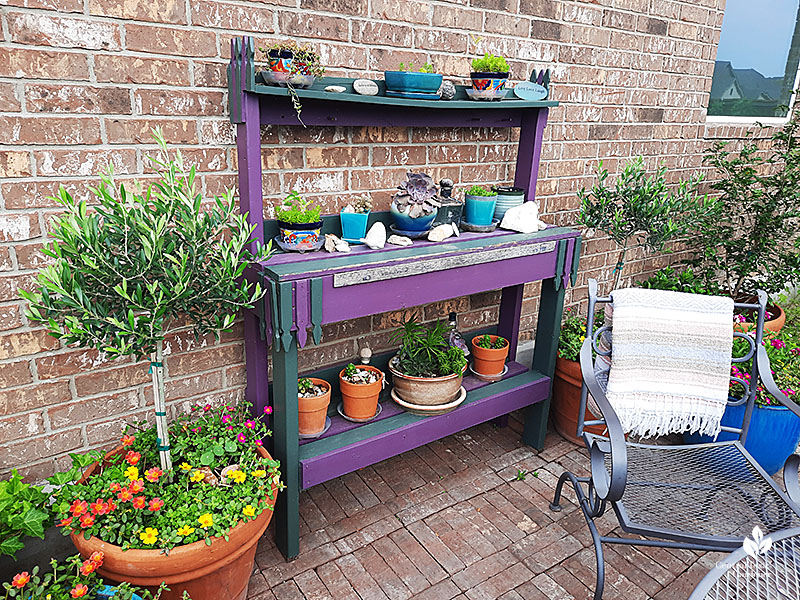 “So that’s why we chose the purple and the green together. And I like blues.” 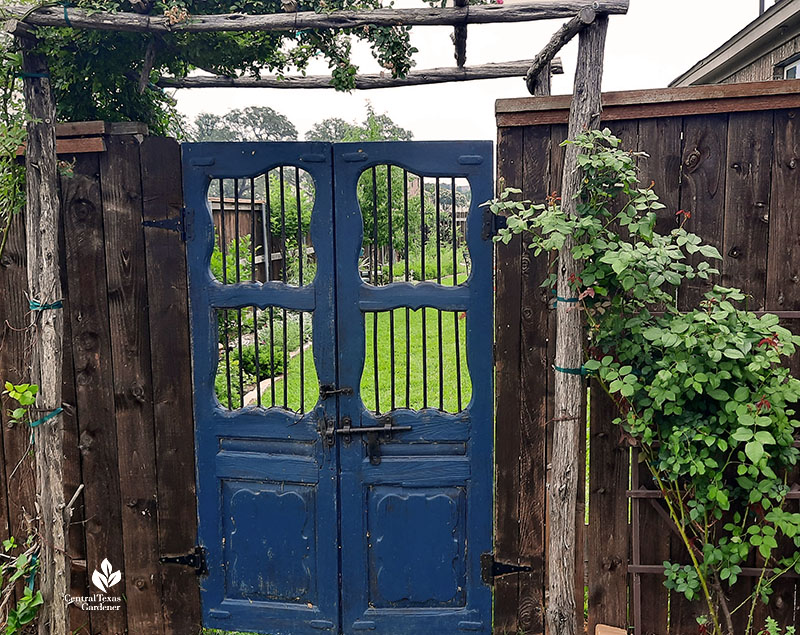 Ana dreamed of a secret garden gate entrance. Happenstance led them to a scarred old gate that they sanded and painted. 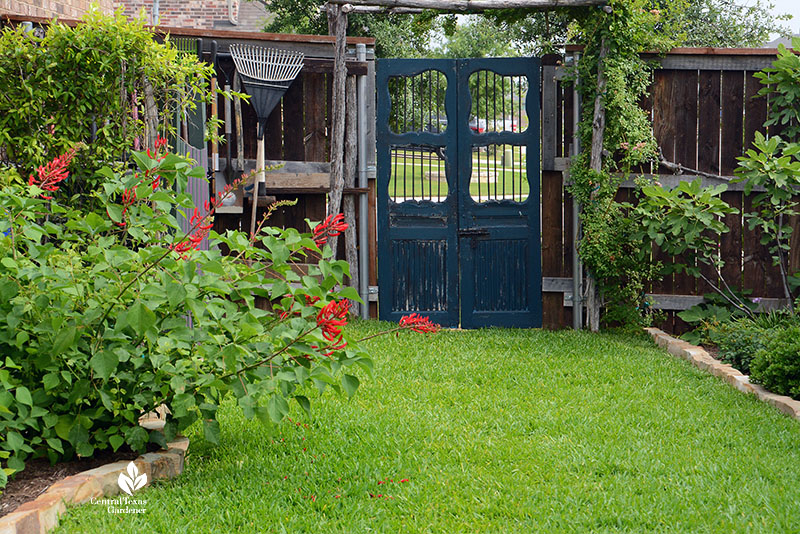 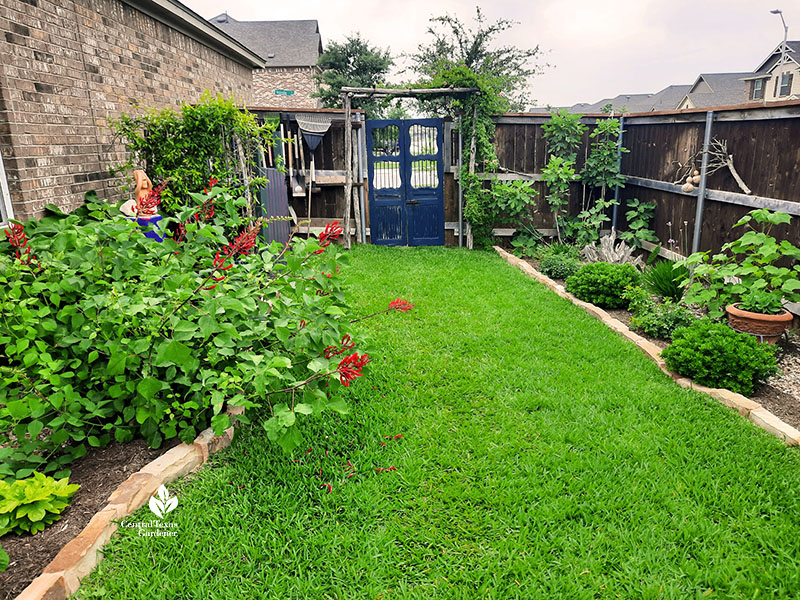 “The neighbors love it and they just pass and they say, Oh, I love your gate. It looks like a secret garden. Can I go in? And as of course, everybody is welcome,” she said. 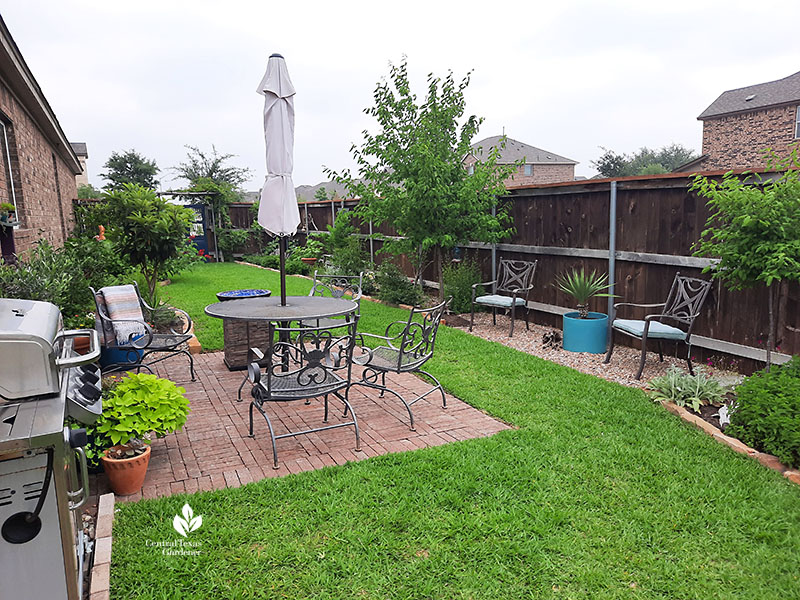 Yes, everybody’s welcome, including the many birds, butterflies, bees, tiny pollinators, lizards and more that Ana and Julio nurture and shelter. 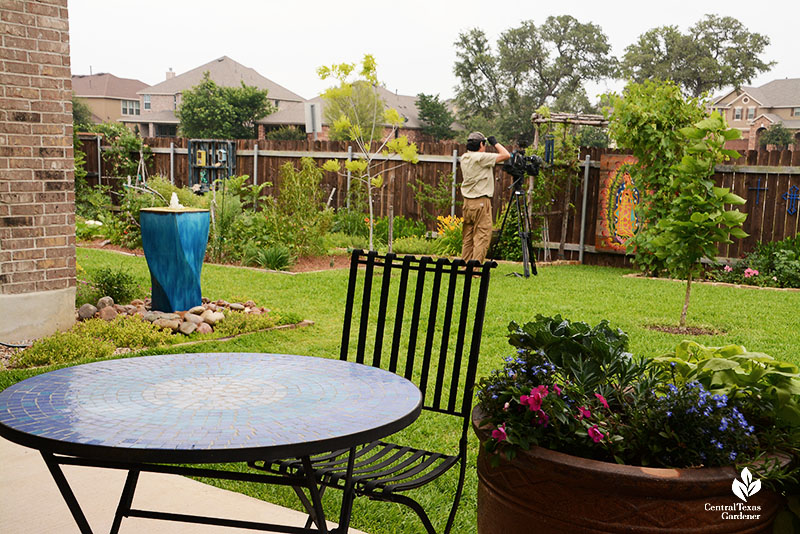 Birds have come to trust them so much they hopped around and splashed in the fountain, totally oblivious to us strangers. Every year, they nest in the small trees. Ana recently reported that they have babies in a small fig tree.

For Ana and Julio, “This is our place we enjoy and we relax and it’s a stress-free zone for us. When people say, ‘Oh, I’m going to the gym,’ and I say, ‘Oh, I’m going to mine because this is my gym.’ I dig out and I work hard every day because, you know, having a garden, it’s hard work. It’s nothing like you plant and forget about it. It’s something that you have to put love and all your energy, but it pays off. . .It’s just amazing to be able to create a place where we can relax and enjoy every single day.”

Watch their story now and how Ana’s growing a peony in Texas!