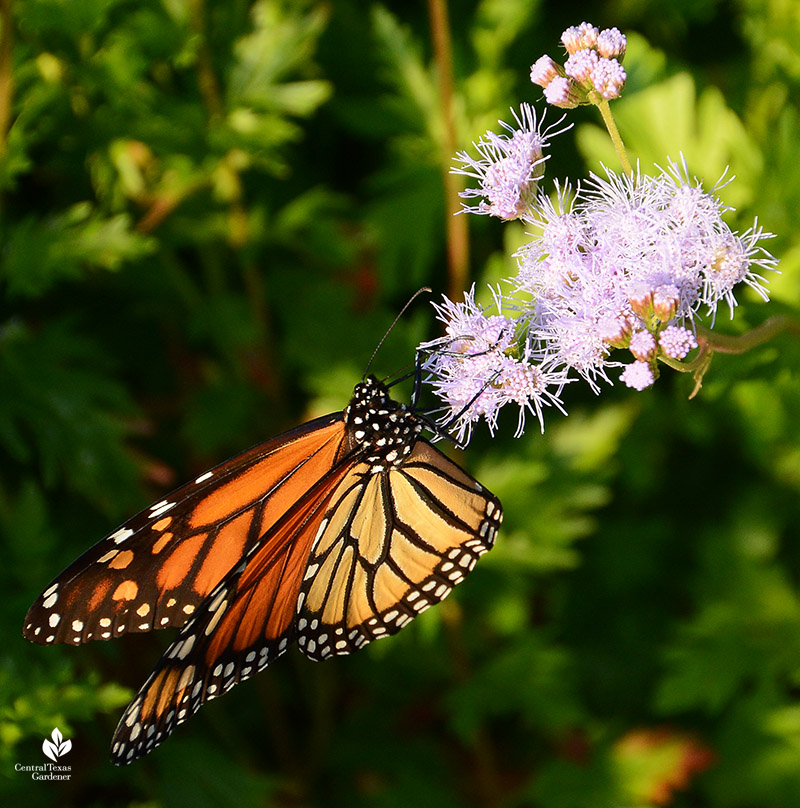 Starting over or starting anew can seem pretty overwhelming, especially when it’s a weedy patch of dusty earth staring your dreams in the face. This week on CTG’s broadcast premiere, meet two families who enriched their soil and souls while building neighborhood community and a pollinator paradise. 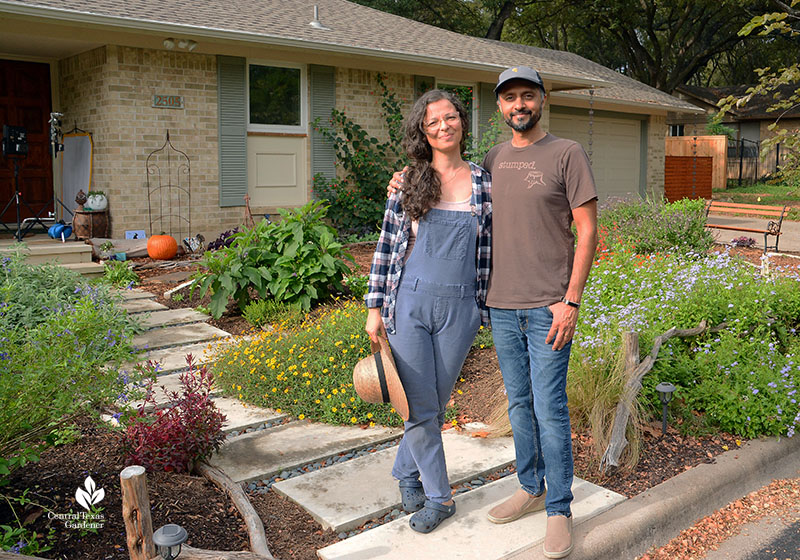 On a sweet late October morning in 2021, we met California transplants Suthi and Sanjay Nagar in their permaculture-inspired front yard. Enthusiastic pollinators, including that Monarch butterfly on native Gregg’s mistflower, frolicked among beneficial herbs and fall-blooming splendor. 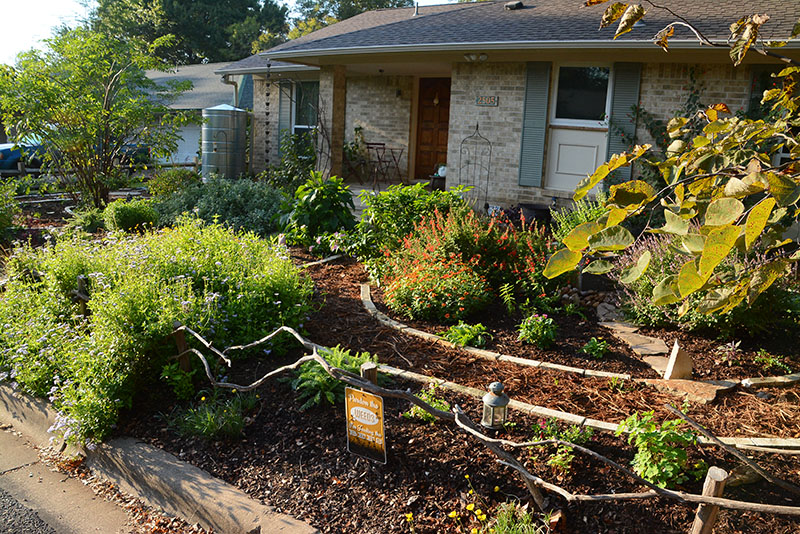 When they moved to Austin with their young daughter, they loved their neighborly street. But Suthi’s growing vision went far beyond the yard’s skimpy lawn and shrubs. New to Texas and new to gardening, too, she needed help to figure out Central Texas challenges. 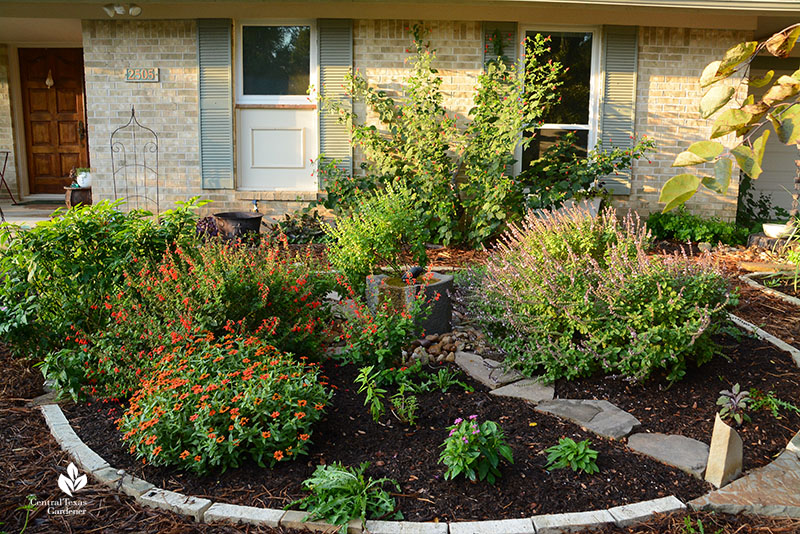 “Early 2016, we moved here from Pasadena, and I spent the first year observing, just what’s the weather like, when does it rain? How does the water flow on the land? Summer sun versus winter sun,” she said. 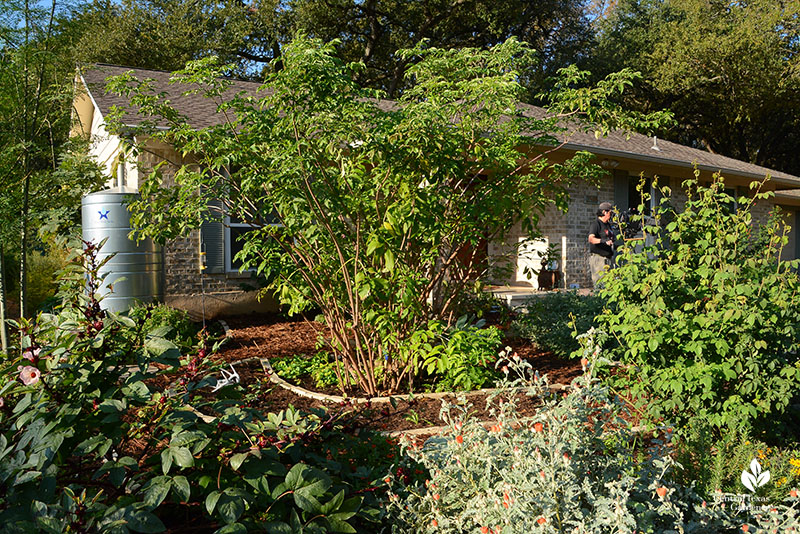 She signed up for a class with the Austin Permaculture Guild to learn how to work with the environment, rather than trying to dominate the land. Their young daughter prompted Suthi’s interest in learning what plants are safe to eat. That led to taking classes in medicinal plants at Cultivate Community Garden Center. 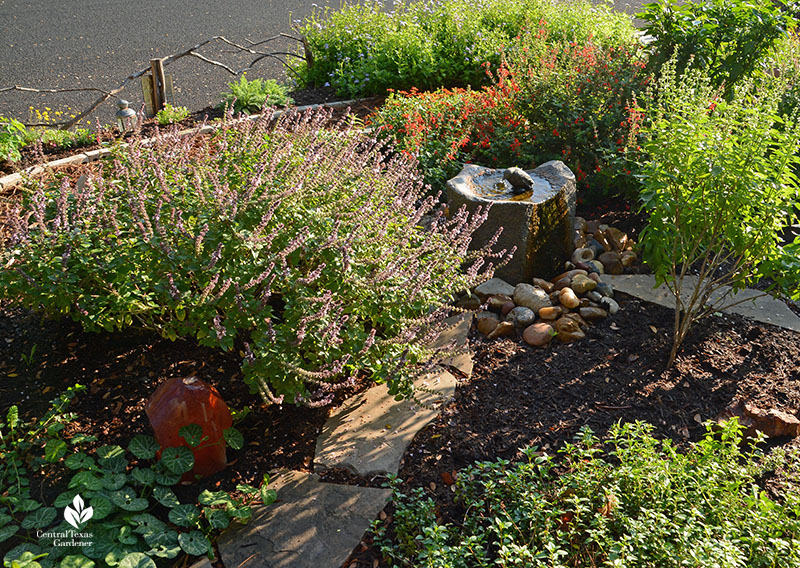 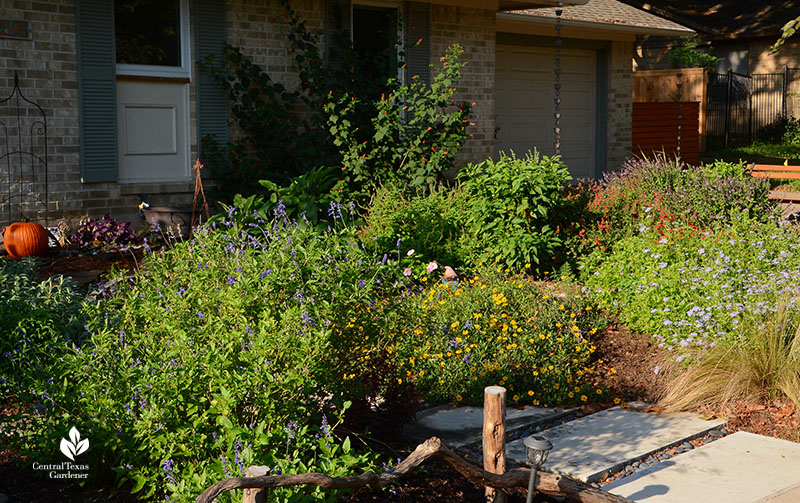 Even in this small yard, she’s followed an element of permaculture known as stacking functions. “And it means that one thing does multiple things, you stack the function. And to me, beauty is a function, so I always pick things that I find aesthetically pleasing. But then I would love it if they are native, or they’re drought tolerant, or they are good for hummingbirds, or bees, or they are a dense shrub that allows birds to make a nest. And then it’s also a bonus if it’s medicinal, or it produces fruit that humans can then also eat. I just like everyone to have multiple jobs, that we can all work together and be efficient,” she said. 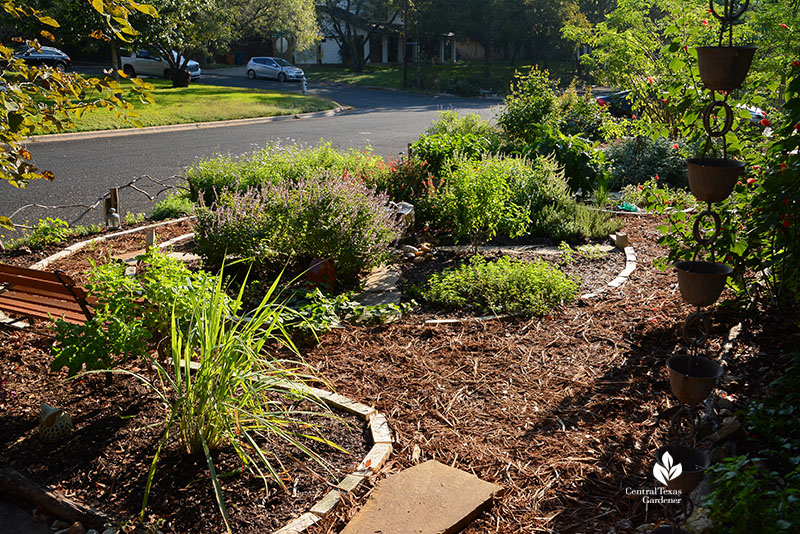 “When people walk by, I want to give them a place where they know that they can take a deep breath, and they can feel grounded a little bit. . .Find your happy space, and if it’s in the garden, awesome.” 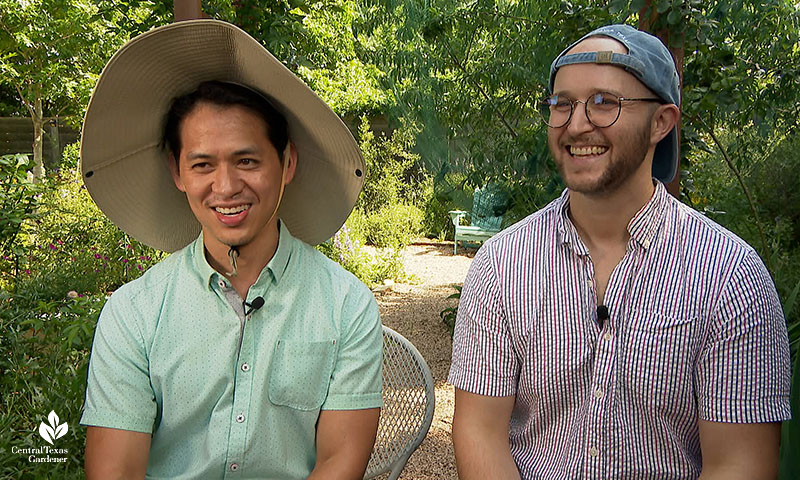 In May, on a sweltering hot Saturday, we headed to an east Austin bungalow where Andrew Ong and Jared Goza plotted new paths of discovery in a total makeover. 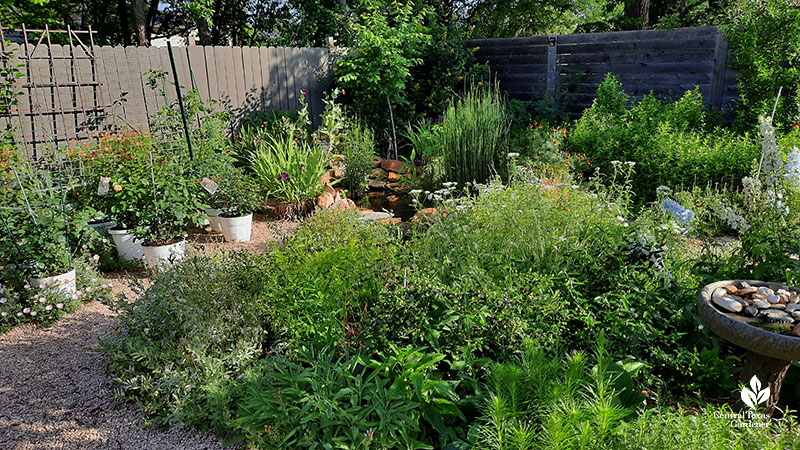 “Great potential” is how the sales listing could have described the yard that came with their first house. When they bought it in 2017, both front and backyards were mostly covered in concrete slabs. After handing over a chunk of change to banish them, they plotted a decomposed granite path around a central island garden anchored by a Shumard oak. 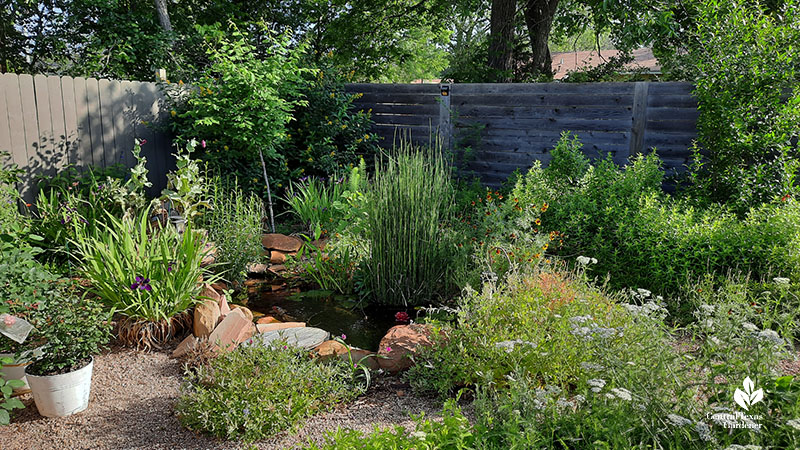 Passionate about plants since childhood, their tireless curiosity directs them to new adventures after work. When they built a corner pond framed by seasonally-blooming plants, birds now drop by for a drink or a splashy bath. Bees, butterflies, and hummingbirds dart among flowers chosen for them. 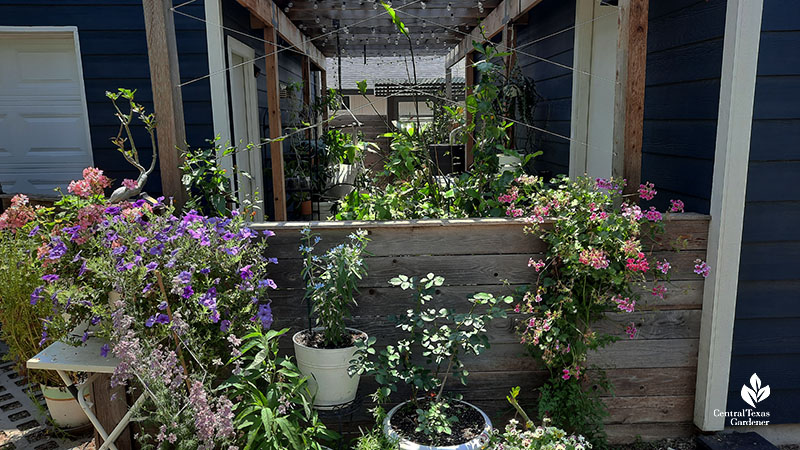 “Some people focus on a specific thing in their garden, and I think ours is a little eclectic, but that’s how we like it,” Jared said. 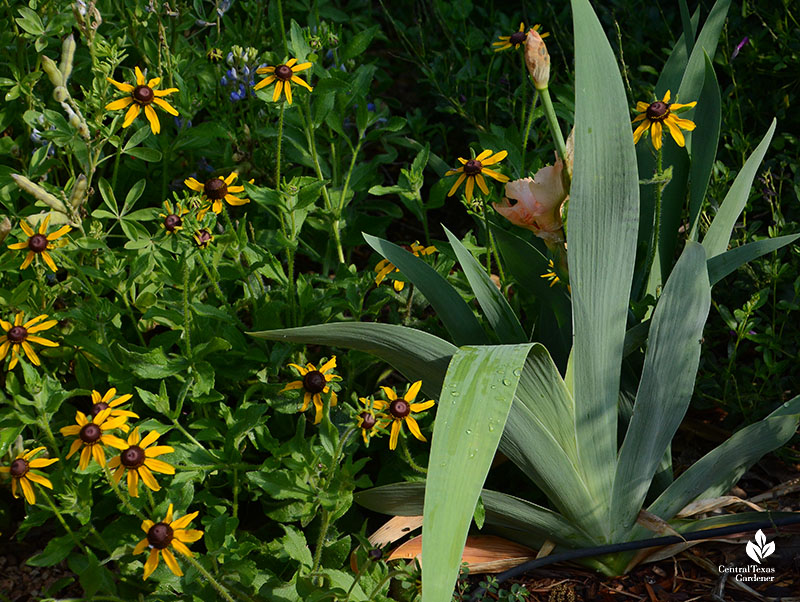 They unite perennial favorites with seasonally-blooming seeds. I’d like to mimic this charming duo: bearded iris with pollinator-beloved native black-eyed Susan, ideal for indoor arrangements, too. 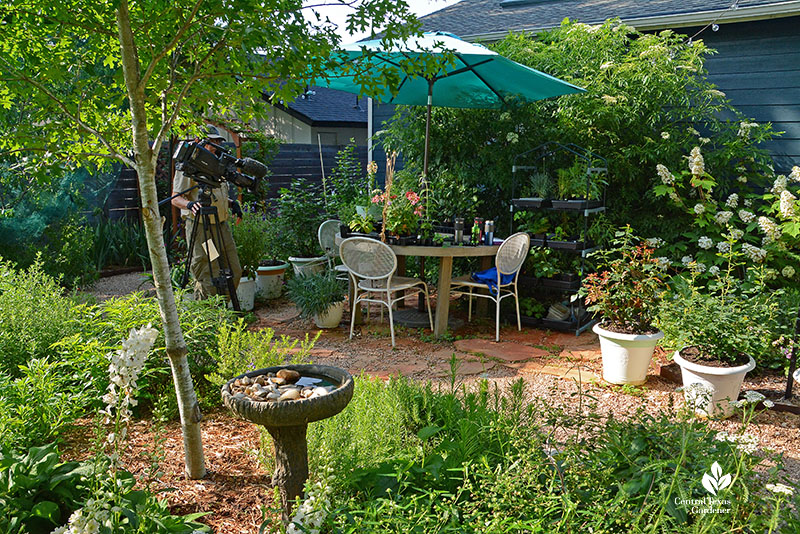 Andrew organizes his seed planting and blooming dates on a spreadsheet, along with details about varieties they’re trying out. In May, we just missed poppies and larkspurs, but foxgloves and delphiniums joined summer bloomers ready to pop. No doubt Andrew’s got his spring crop going already in carefully arranged seed trays. Do note that since drought still rules, seedlings need ongoing sprinkling so they don’t dry out. 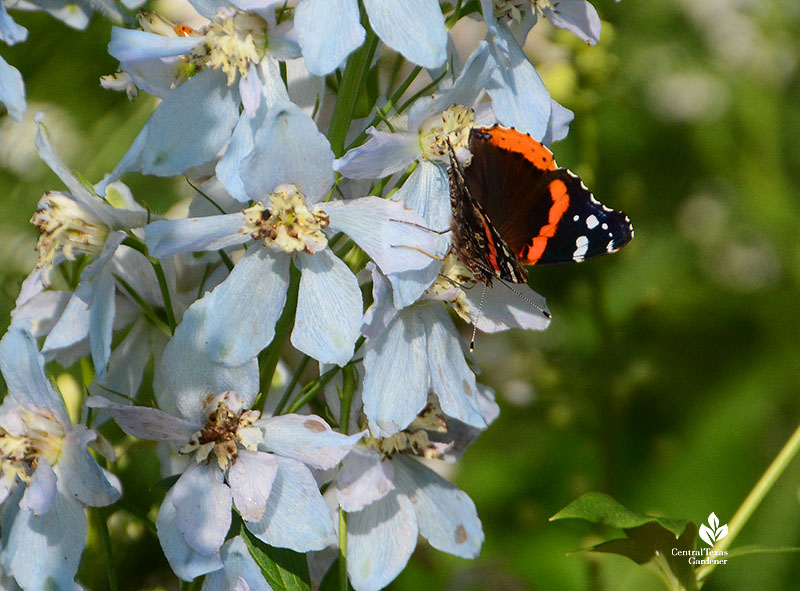 In May, it was already hot and dry, so it was a treat to see a Red Admiral butterfly gratefully nectaring on a late-blooming delphinium. “I think that the more diversity you plant, the more pollinators and wildlife you attract to your yard. And that’s really the goal in our garden,” Andrew said. 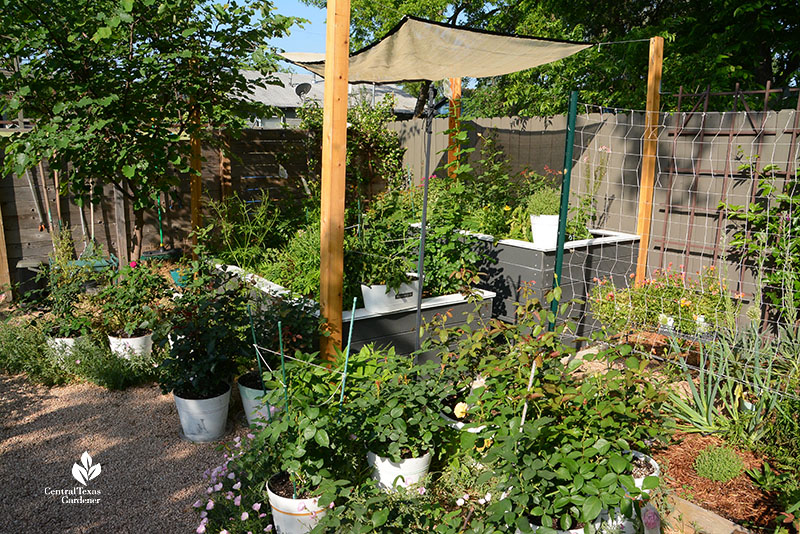 Although their soil is okay now that they’ve amended it after post-concrete slab compaction, Andrew built raised beds, too. “Andrew really wanted to provide a place that had good water retention and a better soil quality for his roses and also had this really smart idea to add height to the garden as well. Caveat to that is that raised beds, just like container plants, tend to need to be watered a little bit more frequently because they tend to dry out a little bit faster because they’re raised up and they’re not on the ground,” Jared said. 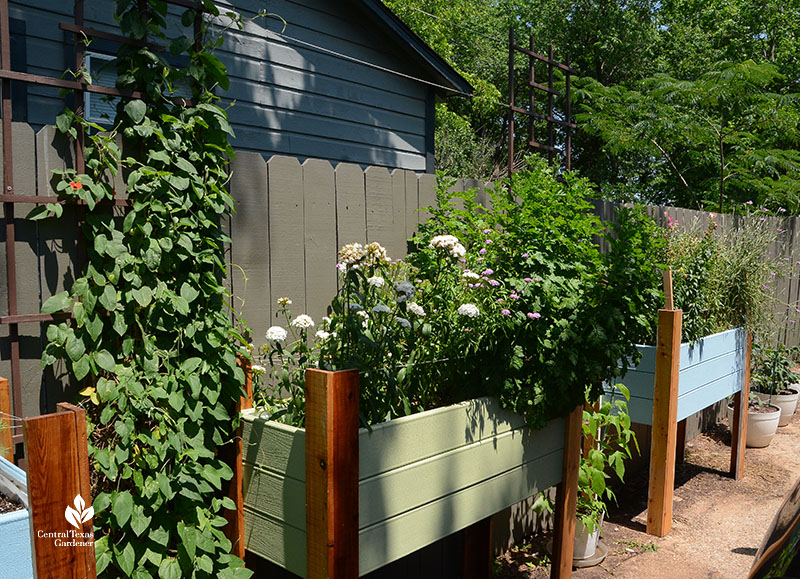 Andrew also wanted to add vertical interest. “That is why I built those trellises from scrap wood so I could have these beautiful vines growing up and cascading over at functions to turn an otherwise boring space into a place that really captures people’s attention and really draws them into the garden.” 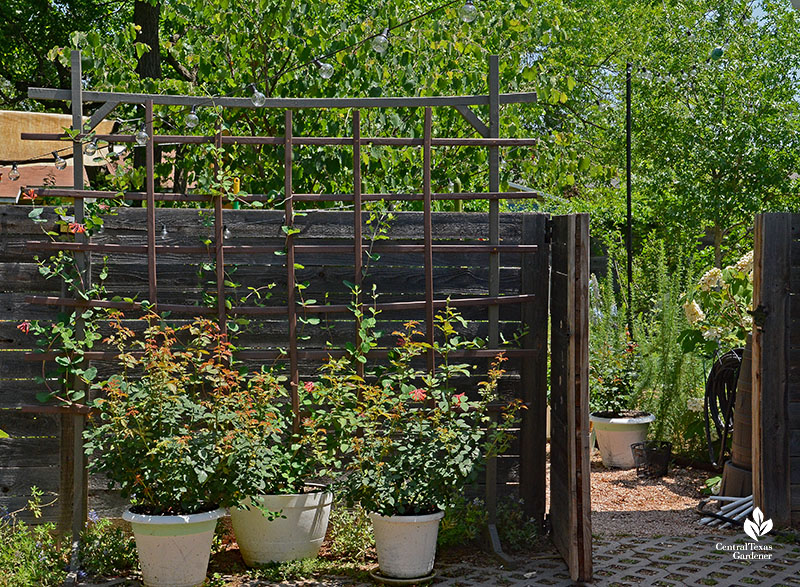 They know how daunting it can be, and yet how rewarding, even in a small space. “I want to bring the beauty that I see in nature into our own property. I want it to be a destination and a place that I can actually enjoy,” Jared said. 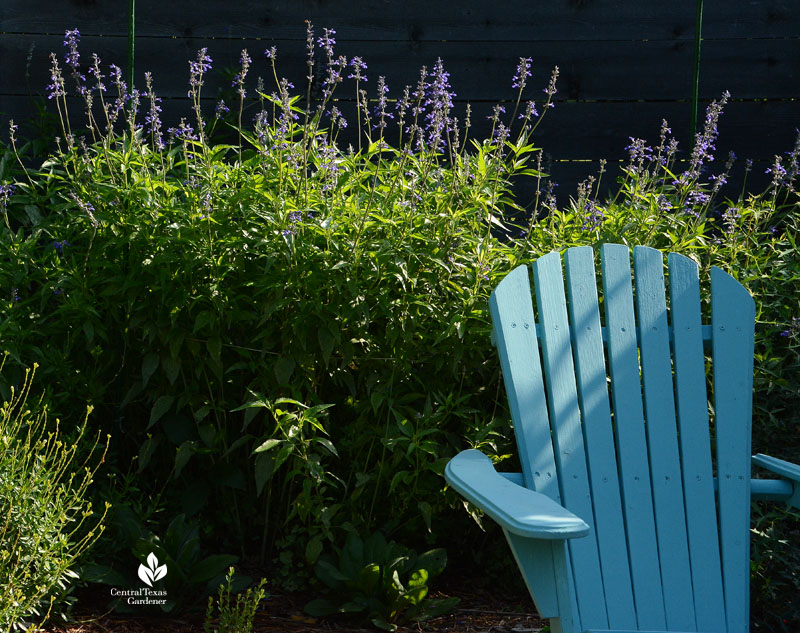 Perennial native mealy blue sage (that we can plant now) blooms again in fall, as well as spring, though drought may curtail it this round. Still, when it all comes together in spite of unexpected freezes, searing temperatures, and extended drought, Andrew realizes why all their work is worth it. “I feel like when it prospers, you know, it makes me feel like it’s kind of like Mother Nature smiling. Thank you for caring.”

Watch now to see what’s growing on with viewers, too, and how John Dromgoole inspects plant roots in nursery pots.