Today I feel like the “roving reporter.” This is what grass looks like when you cut it too short in marathon heat. 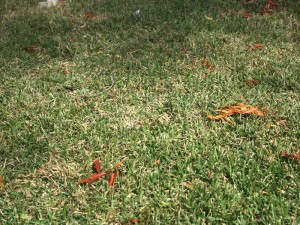 Mine is hanging in there, since we keep it tall, and let the clippings fall where they may, our free way to fertilize. 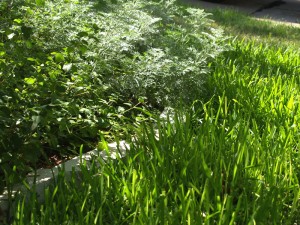 Over the years, I’ve whittled away the lawn by 70% or so, but some remains. Since I don’t give it special attention or any more water than the perennials, it’s the lowest maintenance part of my garden. And I really can’t handle any more plants right now! Hardscape or gravel paths come with their own set of duties, while the grass tidily absorbs leaf litter and seeds that fall its way. And you can’t beat it for playing ball with Chester the cocker spaniel! 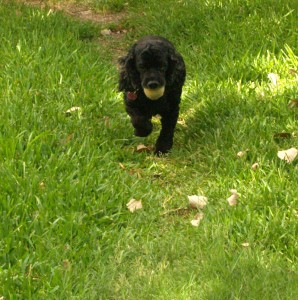 With these record hot days, I’m glad for the Artemesia ‘Powis Castle’ and white plumbago in front. They make me feel cool just to see them. The plumbago will go into full swing in the next few months, when it’s a cloud of white, even in August. Since I moved the blues, they’re just coming on, but soon they’ll mingle with the white to refresh the most scalding of days. 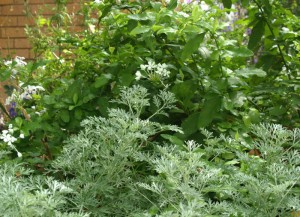 The purple trailing lantana that frames this bed will soon join them in earnest. Beyond, the daylilies are upstaged for the moment, but they don’t mind, since they know they’ll get the starring role next spring. 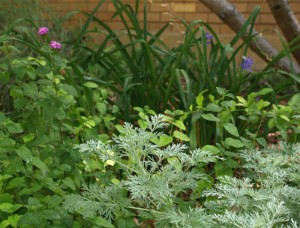 In the beds leading to former photinia-ville, the Barbados cherry is ready to eat, though typically we sample one and leave the rest for the birds. This evergreen shrub/small tree tolerates drought and just about everything else. 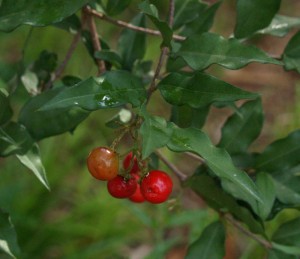 Here are its flowers from a few months ago, free food for the bees. 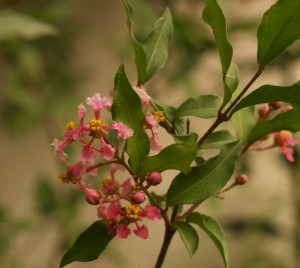 Long ago, I planted a flame acanthus (Anisacanthus wrightii) in front of it for a double whammy of wildlife food. It flowers best in sun, but I’ve got some now in partial shade that are hanging in. It goes dormant in winter, and in February, I cut it to the ground. Springs back up in a minute. Very drought tolerant and I’ve never seen an unwelcome insect on it. I divided this one from one in back a few years ago and dug it up this spring to remove invasive ruellia from its rootball. Obviously that didn’t slow it down! 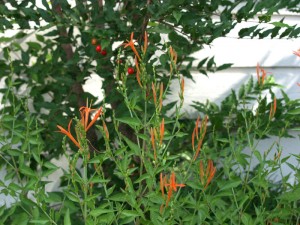 You can tell that it’s a flower designed for hummingbirds. 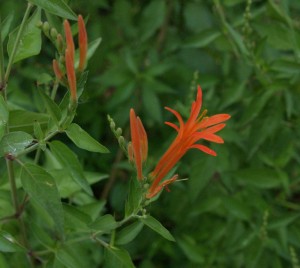 At one front street bed, the desert willow also invites the hummingbirds to join us. I saw the first one on it this week! 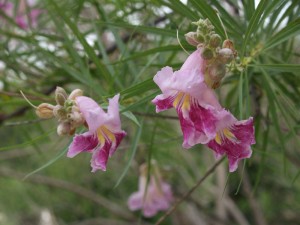 This week on CTG, I thank a viewer who introduced me to Martha’s Bloomers in Navasota. What a charming place! 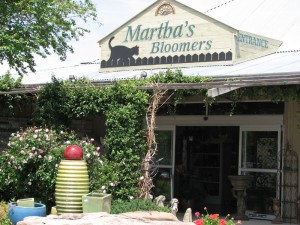 Along with plants, mulch, and soil, they have a tearoom, antiques shop, pottery, gifts, and adopted pets, including Martha and Bloomer. I think this one is Martha. And I had nothing to do with this cat picture! Actually, I thank Sabrina Mayfield from Martha’s for sending them. 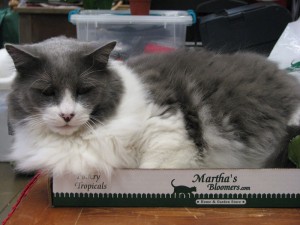 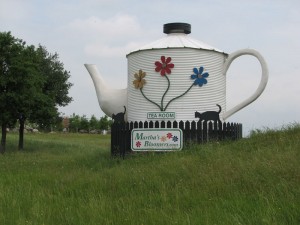 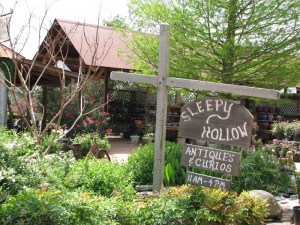 Gay Houston, a passionate plant person and clever designer, pulls together enticing combinations that include sedums and other drought-tolerant plants. The full list will be on our web site.

On tour, we visit Roxane Smith and Gary Aitcheson in a soothing, cooling garden they created with backbreaking work. They’re very busy right now, too, organizing a fabulous Garden Conservancy Open Days Tour for October 4, so mark your calendars!