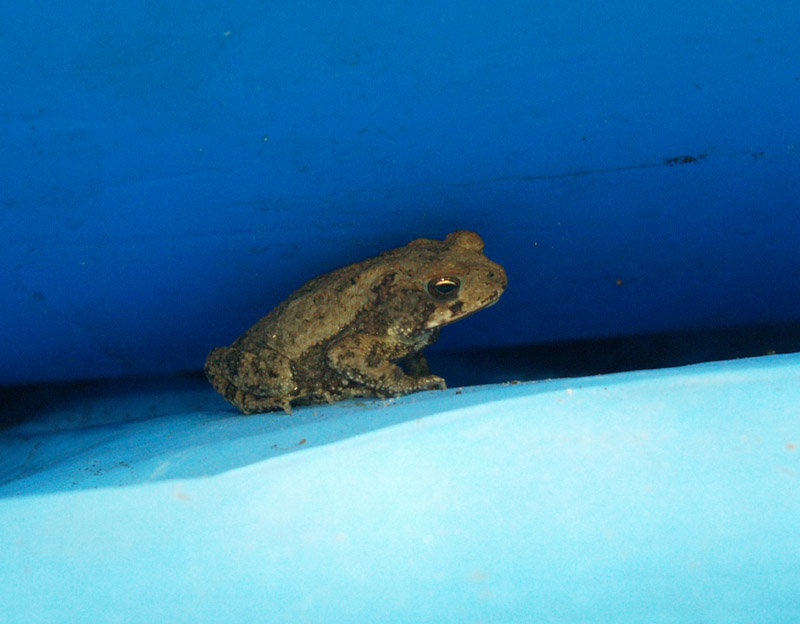 Don’t worry, I haven’t named this one-well, okay, he’s Timothy-who found a luscious “toad pool” in the folds of kiddie pool. His parents (possibly) like the air conditioning drip in front, and the shallow bowl of stones and water in the patio bed where they mate or just cool off. As I took this picture, another little one hopped off. 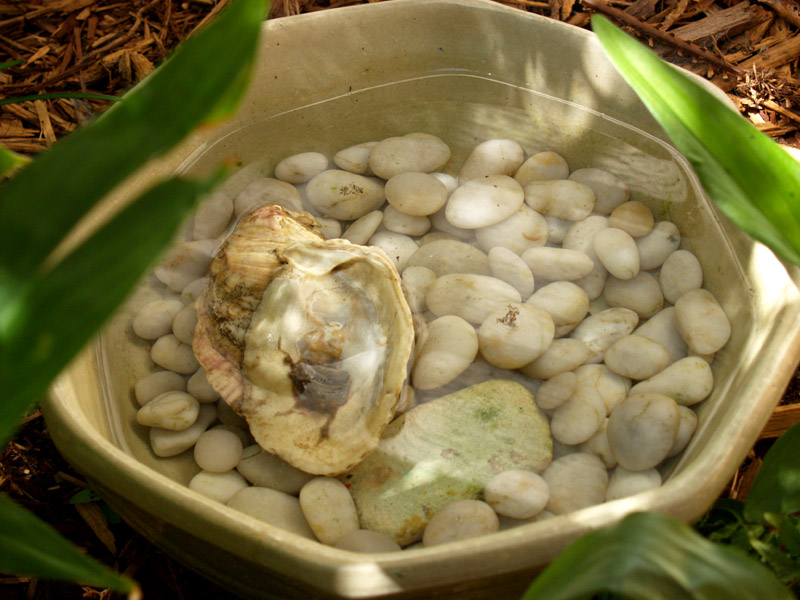 To control mosquitos, I flood it now and then when I add water, and dump in a few Mosquito Bits if necessary. They don’t harm the toads or the pets.

If you think we gardeners are desperate, the wildlife is really frantic. I knew that our idyllic April – July last year would come back to torture us with the worst summer I can remember. At least today, at last, we have rainfall from the sky! I put my tongue out to taste it!

But so far there’s still a little to eat out there in my garden. This bee is on the batface cuphea, and they also like the coneflowers. 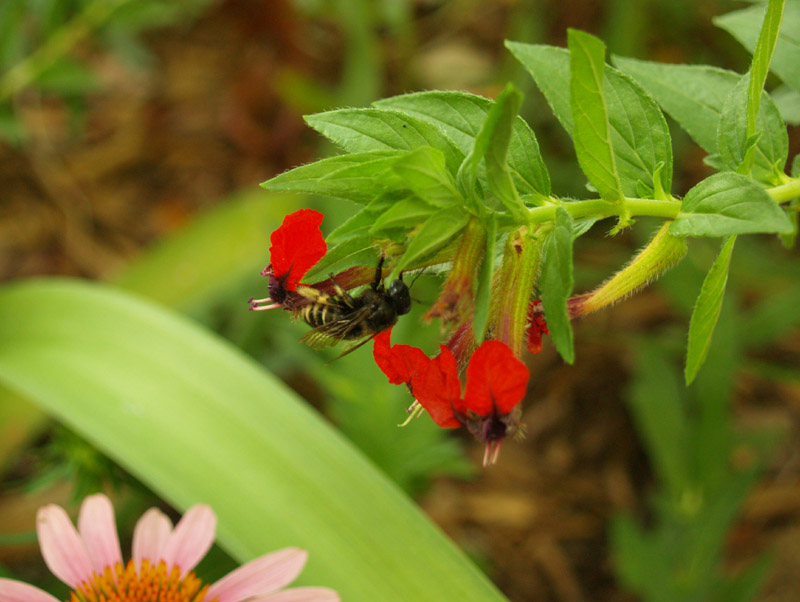 I was about to deadhead the coneflowers to gather seeds but I’ve decided to leave them for the birds. 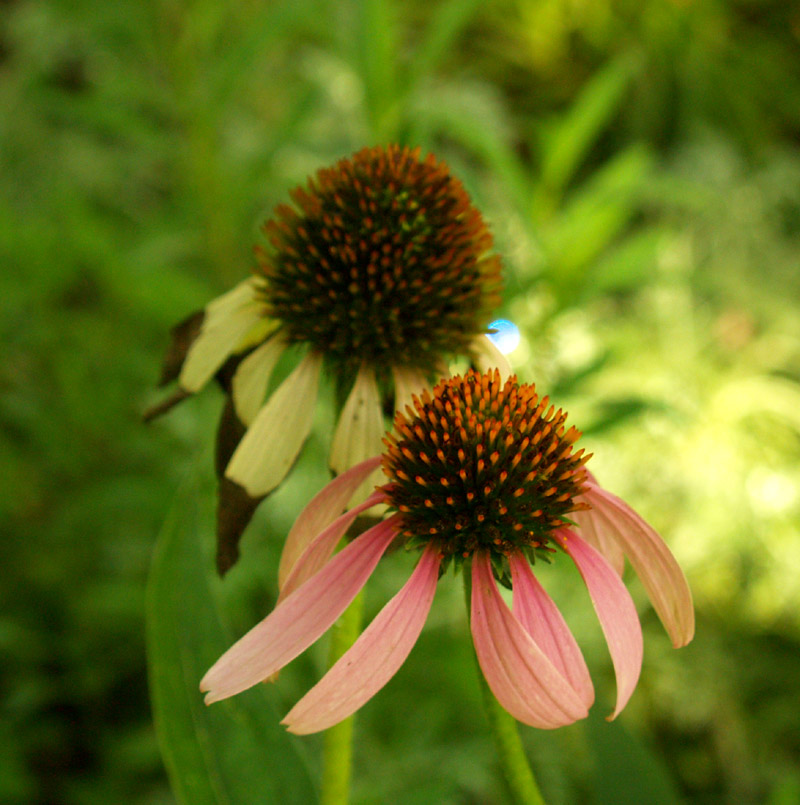 On the sunflowers, I regret my clean-up operation a few weeks ago to diminish their population. Fortunately, I left some, which attract birds and acrobatic squirrels every day. 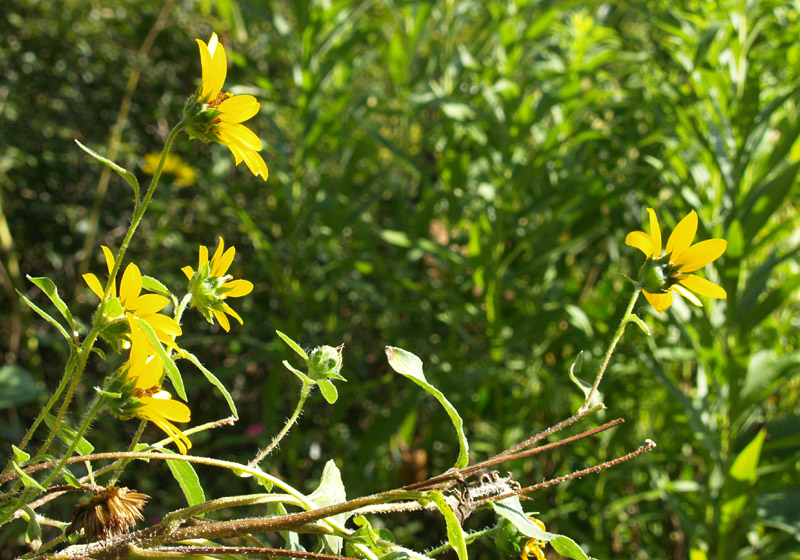 The butterflies aren’t terribly abundant right now, but the few that show up always head for the lantana, this one against the white plumbago in front. 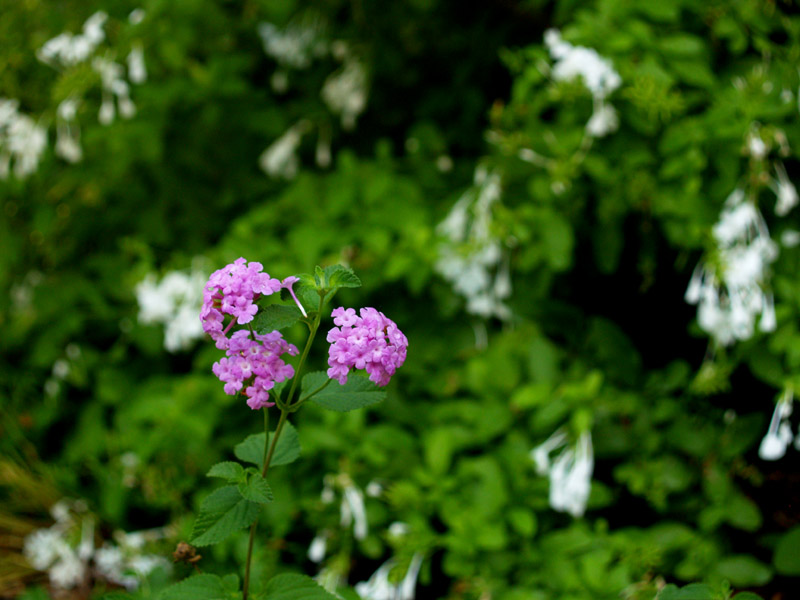 Here’s the front lantana against the blue plumbago I moved. It leads to former
photinia-ville. 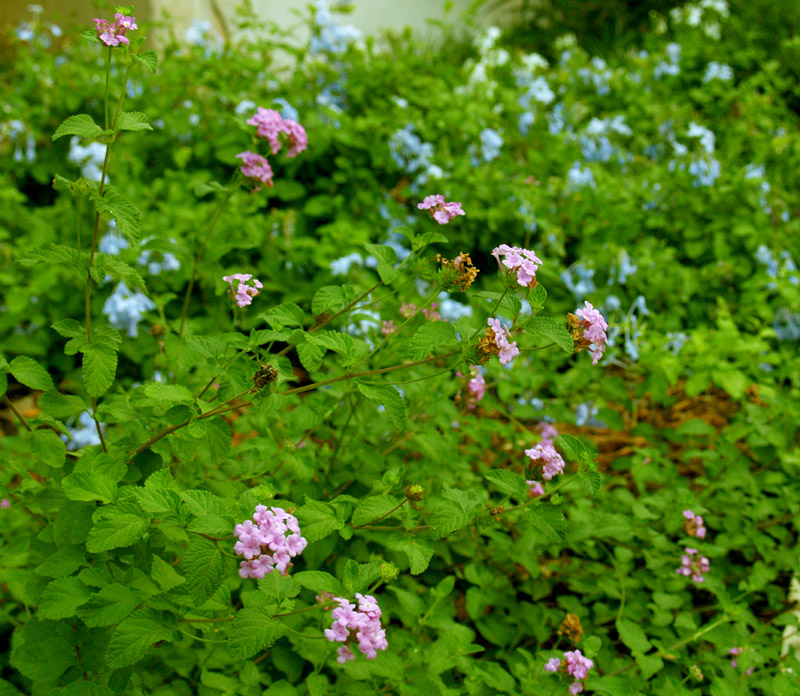 Butterflies also like the patio zinnias and the tithonia (Mexican sunflower). 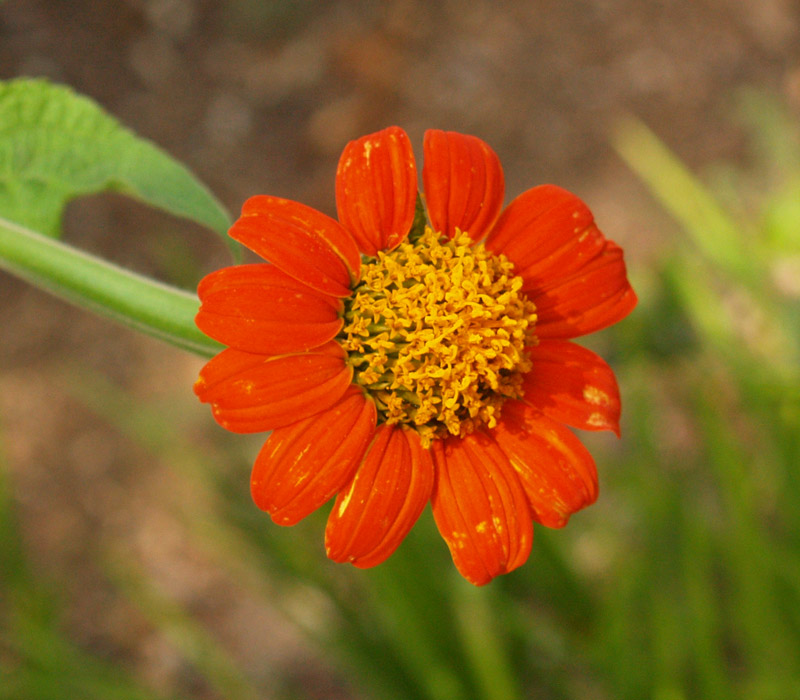 Sadly, in this heat, the tithonia crop is struggling with just a few tall plants. Next year, I’m going to start the seeds in flats in late winter so they have a better chance when the heat is on.

The hummingbirds that I thought I’d never see are now morning, noon, and evening visitors on the various turks caps. I’ve already cut back a few stems to encourage more flowering. I plan to plant more next spring. 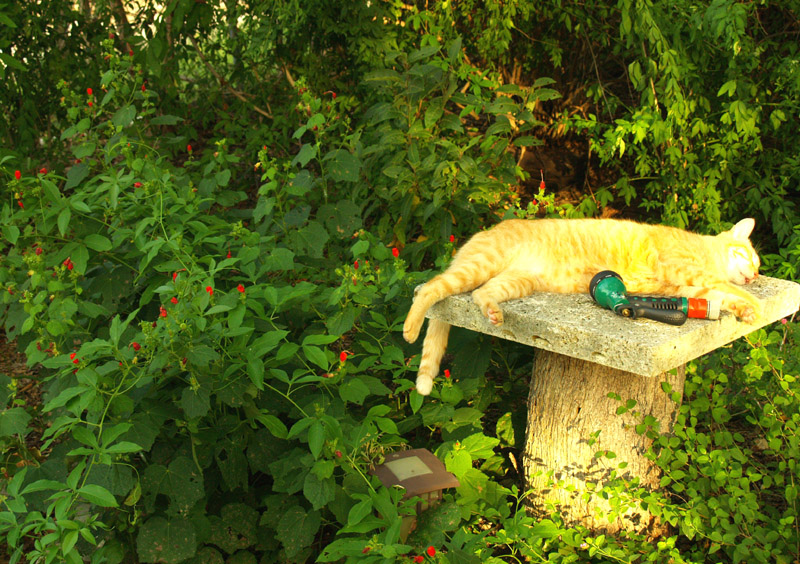 The hummingbirds also hover over the Dicliptera suberecta, and everyone likes the Salvia coccinea. 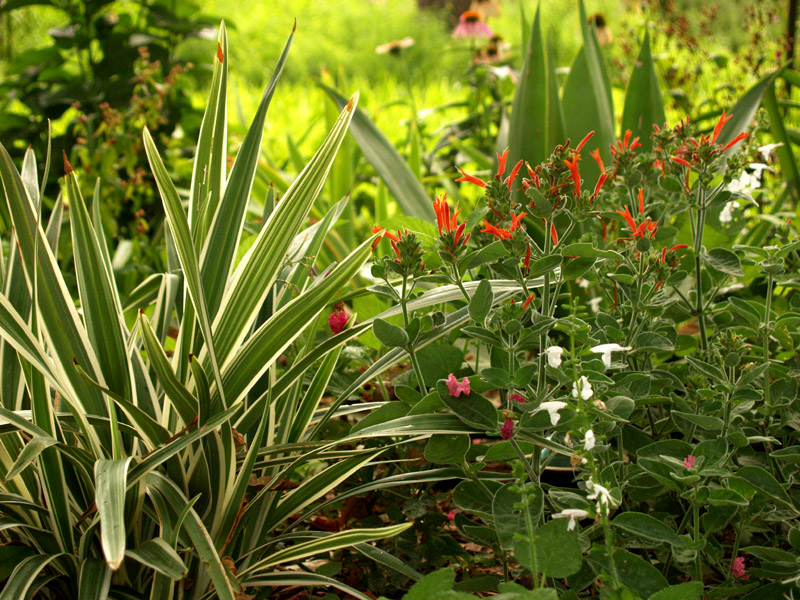 I haven’t really seen anyone on the Mexican heather (maybe some bees?) but it’s nicely filling in that awkward space at the crepe bed’s front border. 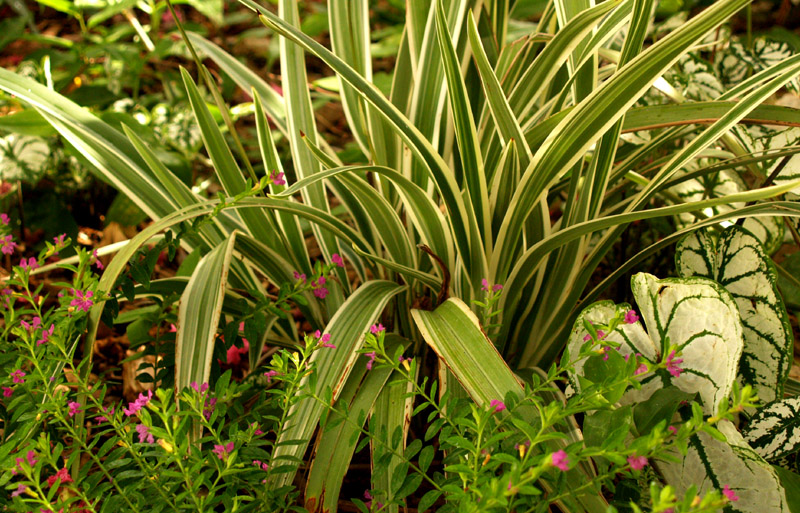 This week on CTG, get ready to meet some plants you may know, but I sure didn’t: Pachypodiums and Adeniums, with our good friend Bob Barth. Just when you think you met all the neat plants in the world, here come some more! And if want even more, check out the Austin Cactus and Succulent Society show and sale Labor Day weekend for an extended adventure into plant exploration.

By the way, Harvey turns out to be a “free” weed killer! Despite the heat, there are stalwart dandelions in former photinia-ville. These are good for rabbits. I clipped some leaves the other night, still warm from the sun. Good grief–dandelions turn out to be rabbit candy! When I put them in his cage, he gobbled the whole bunch in seconds. They’re much healthier than carrots, a rare (fattening) treat. In our yard, he probably has a lifetime supply, and now I know what to do with the nutgrass, too!