Transition time for flowers and food 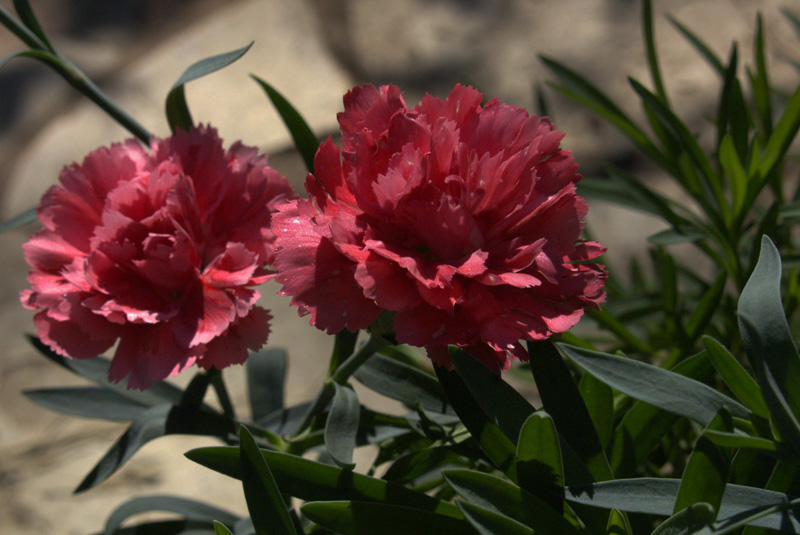 I love everything about it: color, fragrance, blue-green foliage, long-lasting cut flowers. Drought tough. If anything, they hate too much water, and demand perfect drainage.  Two years ago when I got this ‘Silver Pink’, I added decomposed granite to loose potting soil and “mulched” it with a  light layer of the granite.  This would be lovely in a large container with agaves. Hmm, may have to try that! 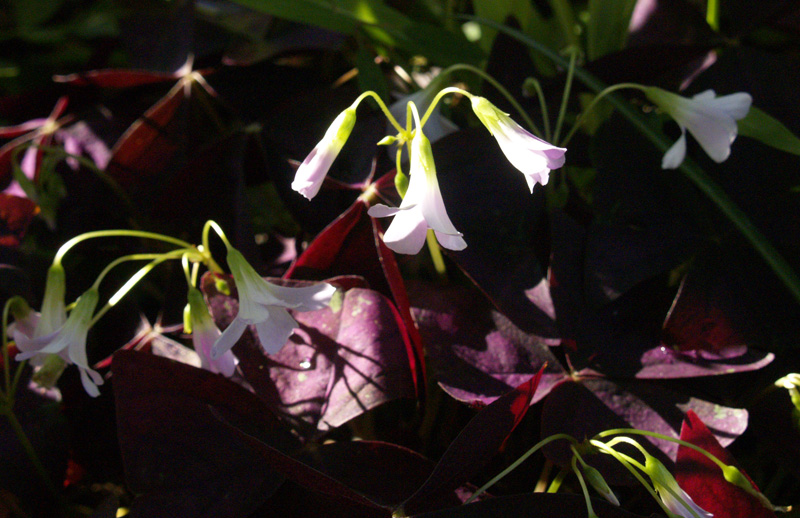 I love purple, but especially I love plants that don’t need much of my time. Between Sunday’s sleet flurries, I got a shot of this trouble-free team, which includes splotchy Arum italicum, columbine and a few Gomphrena ‘Grapes’ to the left. 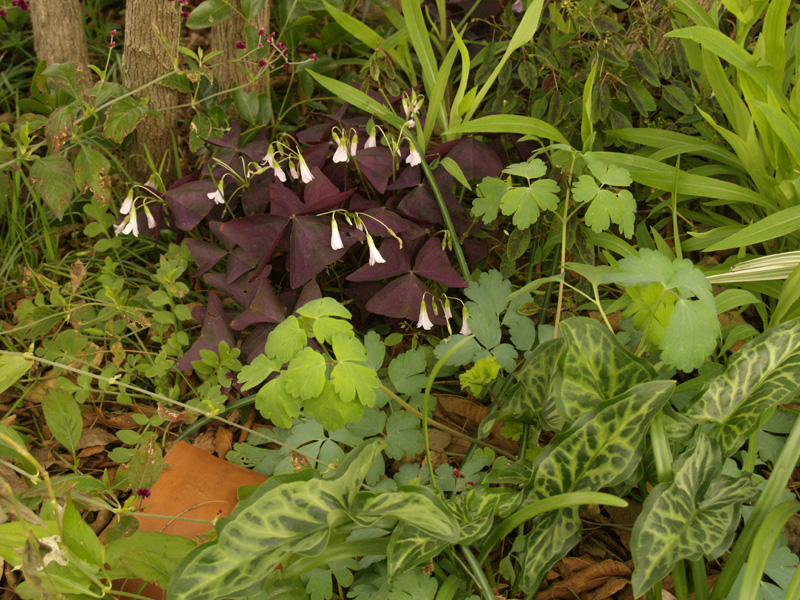 The oxalis and arum quietly retreat underground in summer, returning in late fall. ‘Grapes’ usually goes dormant in winter. I’ll cut it back in a few weeks to encourage its lush little leaves until it pops its “grapes” next fall.

Thanks to rain and cooler weather, the lettuces I seeded a few weeks ago are coming in just fine. Upfront is heirloom ‘Speckles’, one of my favorites, not just because of its coloring! 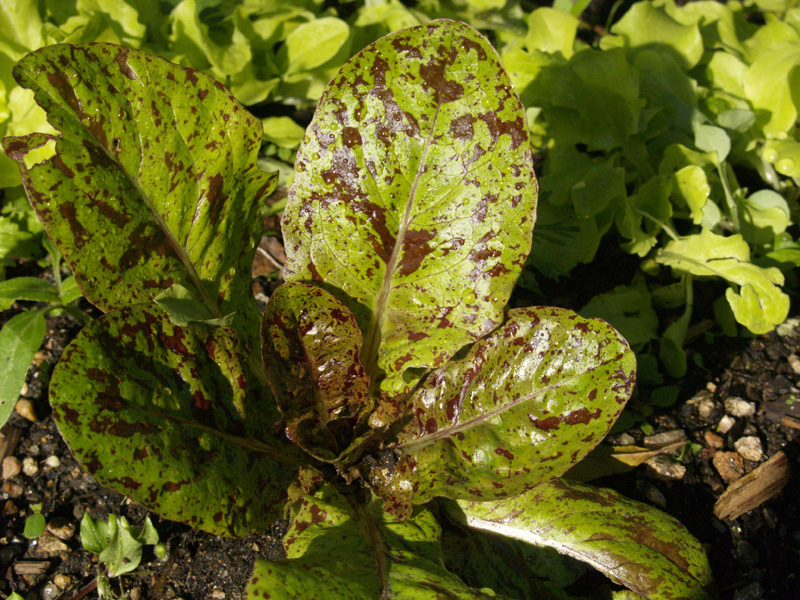 Some cilantro and parsley thought about bolting, but I’ve headed them off for now. 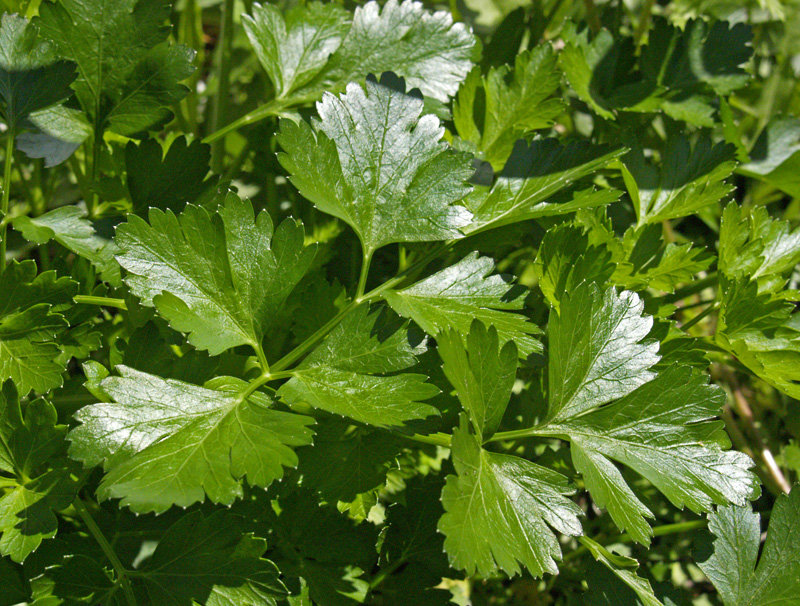 After I took this picture, I cut that parsley at the base to bring in for dinner, and to encourage new stems before it bolts for good. Once upon a time,  I could keep this biennial around for two years, but recently, early hot weather does them in the first year for me, though a few did show back up this winter.

Snapdragons are finally in strut-mode. Leafy Swiss chard makes a nice backdrop, when it’s not coming in to dine, like in our Valentine’s night vegetarian stir fry. 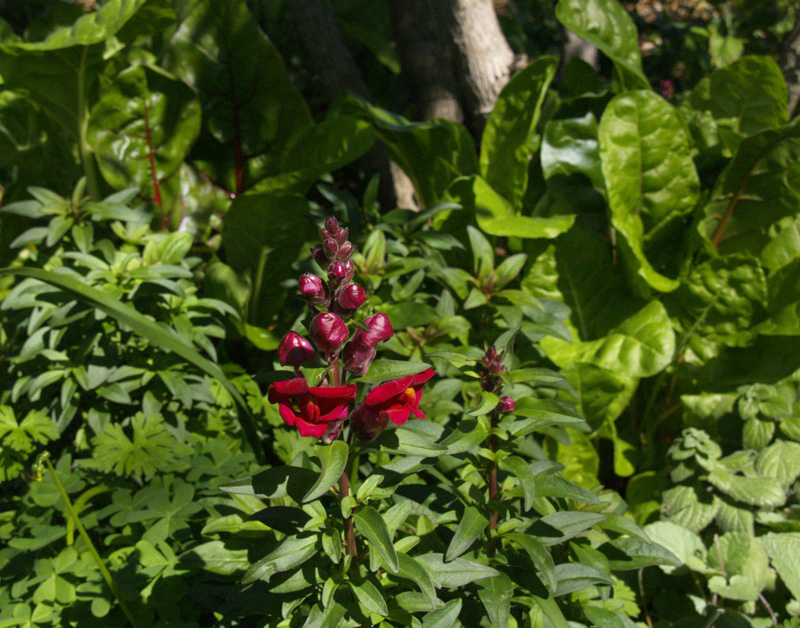 In this transitional garden time, how do vegetable growers extend their cool weather crops and make way for summer’s plants?  This week, Tom meets with Paula and Glenn Foore from Springdale Farm for some insider tips, including their favorite tomatoes. For years, the Foores have been in the landscaping business as Texas Trees & Landscaping (and still are!).  Eventually, Glenn decided to fulfill a dream for a small urban farm on their land in east Austin. 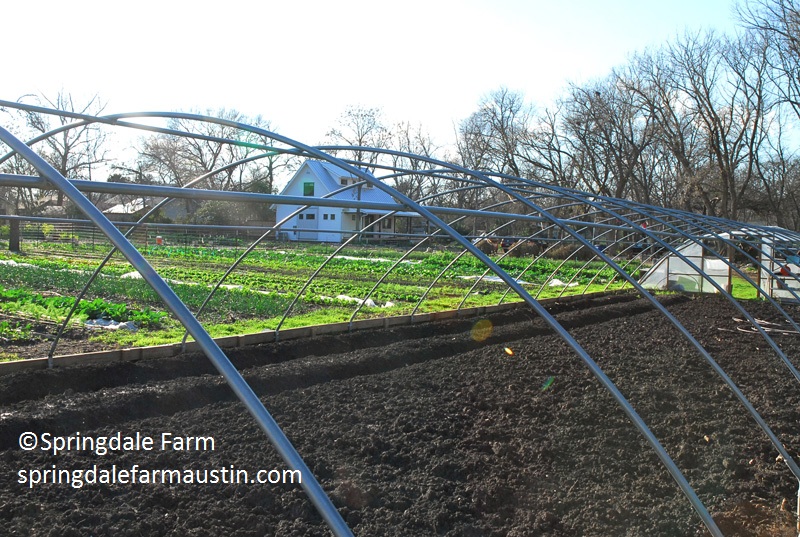 Just down the street from Boggy Creek Farm (Carole Ann and Larry as mentors), Springdale opens its farm stand on Wednesdays and Saturdays from 9 a.m. – 1 p.m. and for many community events. 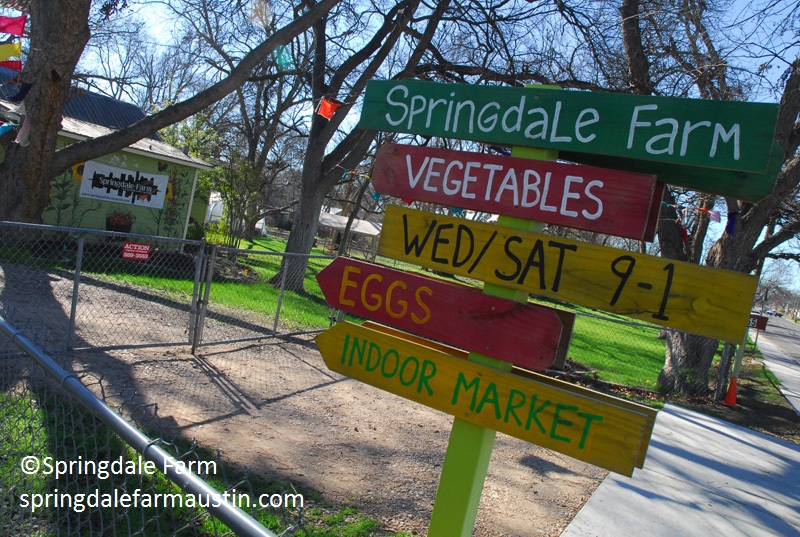 On CTG, get some of their “high tech” techniques to keep seedling tomatoes warm. 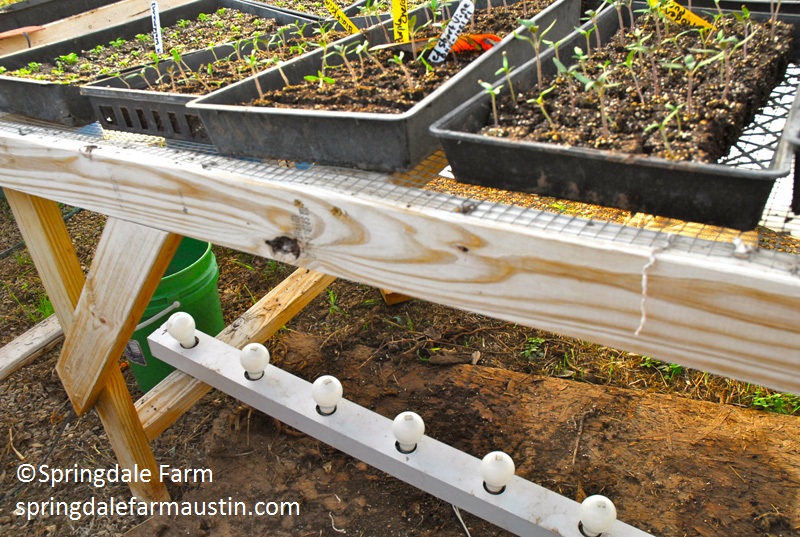 In their greenhouse, they also use buckets of water to warm the plants, a trick for early ground planting (along with rowcover). 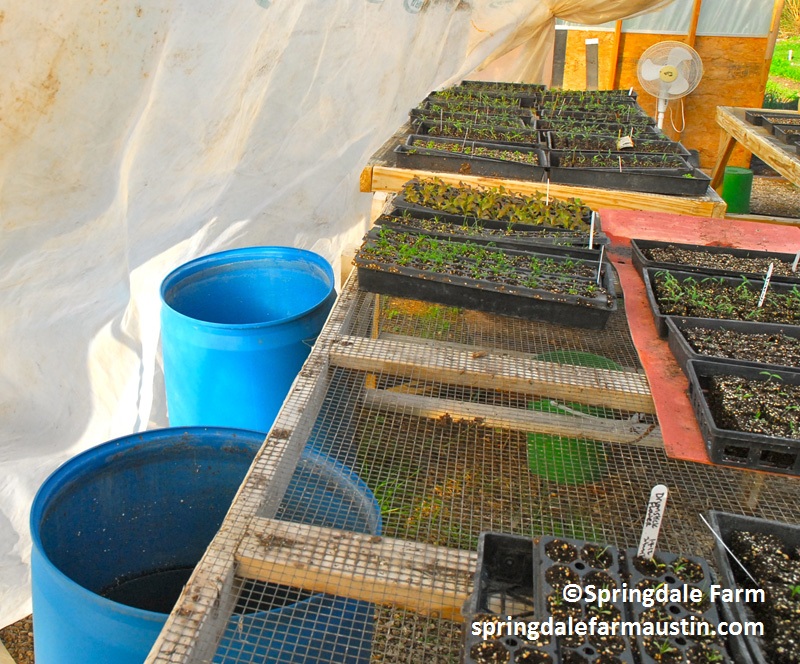 Once again, they’ll be on the East Austin Urban Farm Tour April 15 from 1-5.  Meet your local growers, along with chefs and local drink artisans who will also flavor your day to benefit small farmers and local ranchers who support the Farm and Ranch Freedom Alliance.

Some of our fruit trees are still showing signs of damage from last year’s freeze. Daphne answers Rachel Jackson’s question about her troubled loquats. 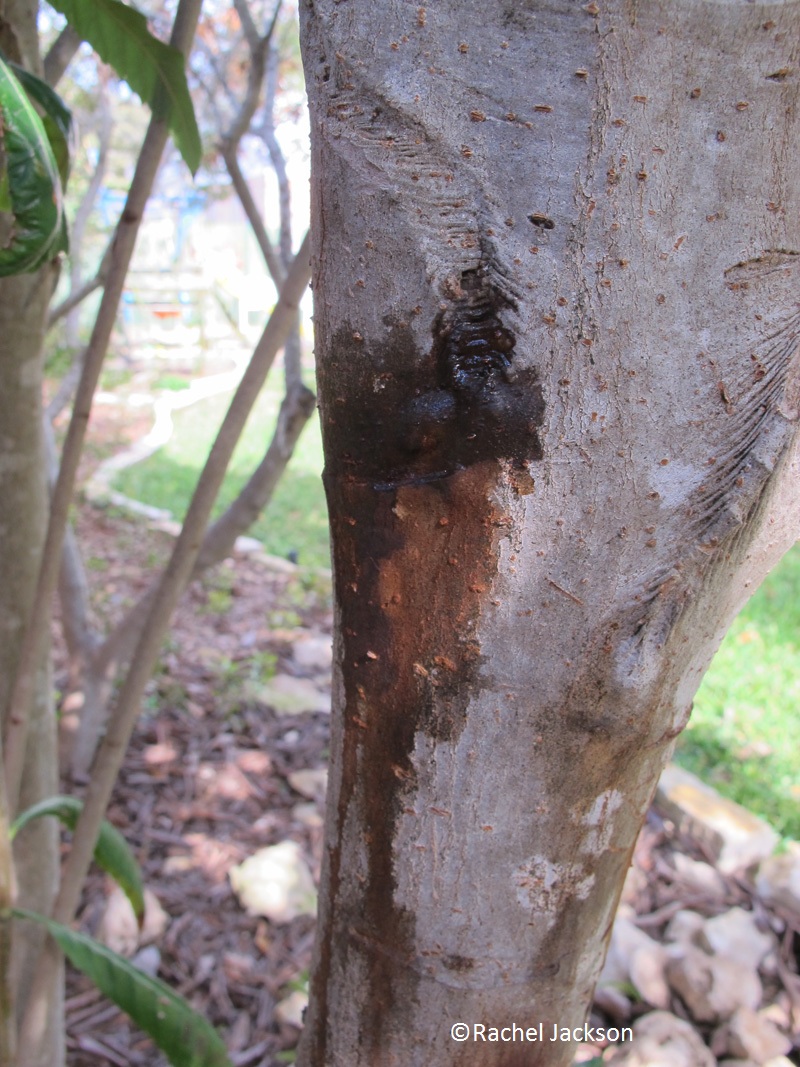 It’s almost undoubtedly cold injury.  Loquat is a relatively cold hardy sub-tropical, but last year the warm temperatures during the end of January caused a loss of hardiness in all plants.  The cold front that came through on the first of February caused a sudden drop in temperatures.  We went from 74° to 11° in about 22 hours. 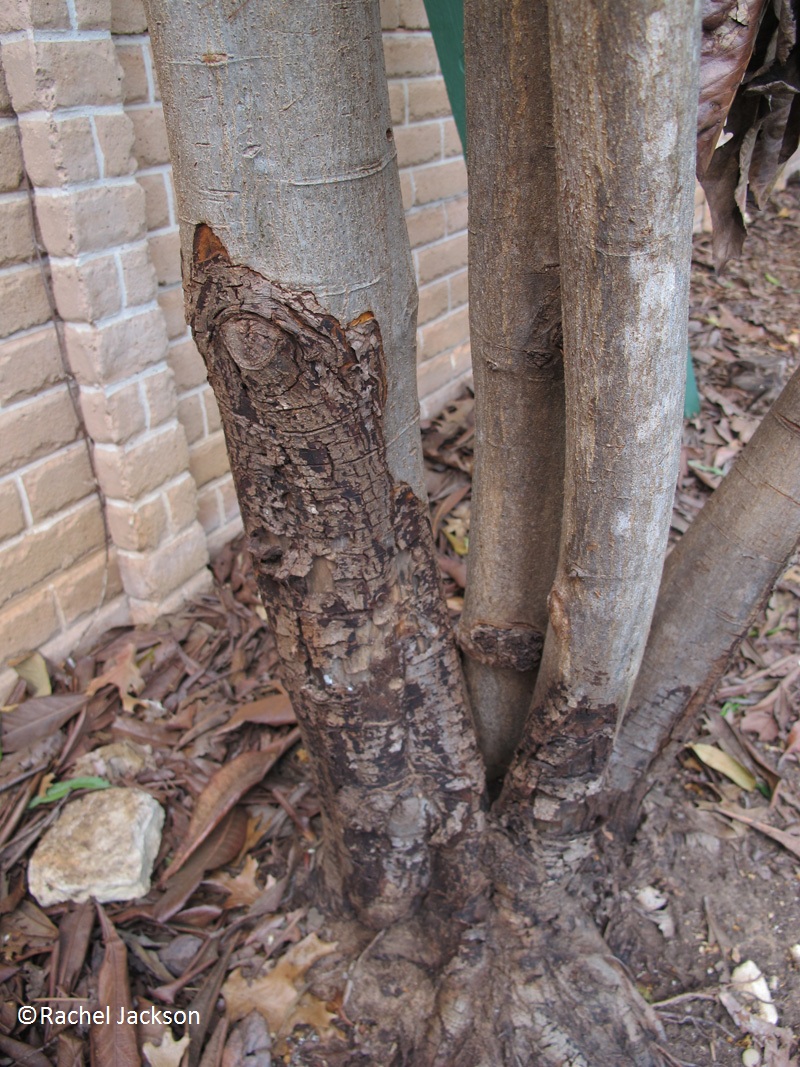 Since this could certainly happen again this year, here’s Jim’s advice for our fruit trees:

Keep the plants well watered, but not saturated, over the winter.  The drought last winter greatly exacerbated the problem with cold injury.  Trees can indeed repair themselves, but don’t be surprised if limbs continue to collapse and bark sloughs off of the trunk.  Just keep the plants in as good of health as possible, remove dead wood, and hope for the best.

Kale is a super healthy, easy-to-grow winter green. Trisha shows off her favorite varieties, including Redbor, to put on your list for seeding next fall. 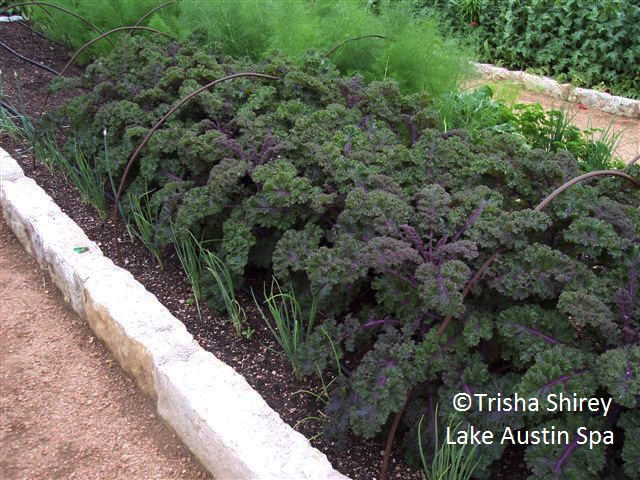 In the meantime, if you have kale to harvest or buy at a farmers’ market, get her delicious recipes for kale salad with Caesar salad dressing, kale chips and more!

On tour, get hands-on tips from some of the year-round gardeners at Sunshine Community Gardens. From its inception in the 1970s, Sunshine has put food on many a table while connecting urban folk to the root of its origins.  Its mission is more important now than ever:  a public space where people can come together to grow organic food in a wildlife haven framed by asphalt.

At their annual plant sale on March 3 from 9 a.m. – 2 p.m., pick up their tried and true vegetable and flower transplants.

You also don’t want to miss the Austin Organic Gardeners’ plant sale March 3 from 9 a.m. – 2 p.m. at Zilker Botanical Garden!  There’s plenty of time to hit both to get the best varieties for your summer garden, plus meet up with local expert gardeners!

See you next week, Linda