Remember last spring and fall when mushrooms appeared like magic? I always get a few, but last year, many mornings were absolute wonderland! 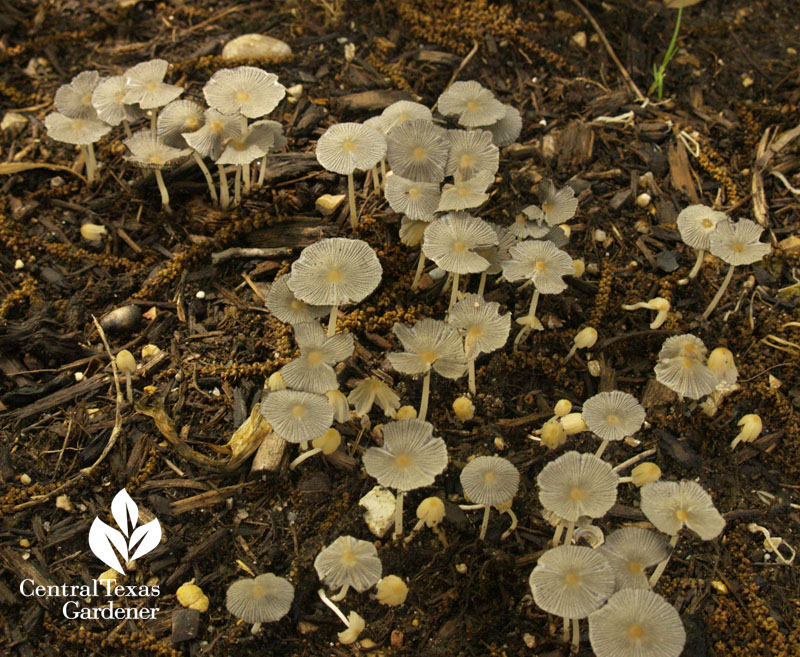 Some gardeners fear that mushrooms mean something really evil. 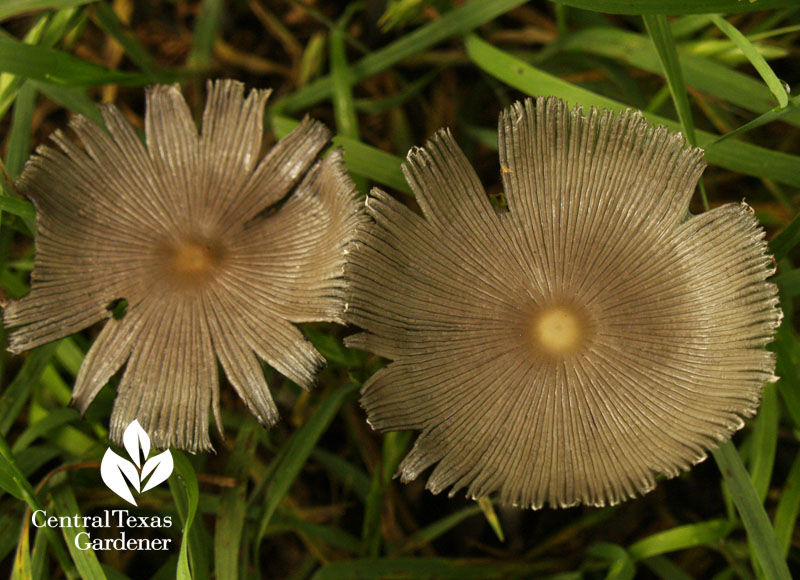 Actually, it’s just the opposite! Tom meets with Ashley McKenzie from the Texas Wild Mushrooming Group to explain what mushrooms are doing and how lucky you are to have them. 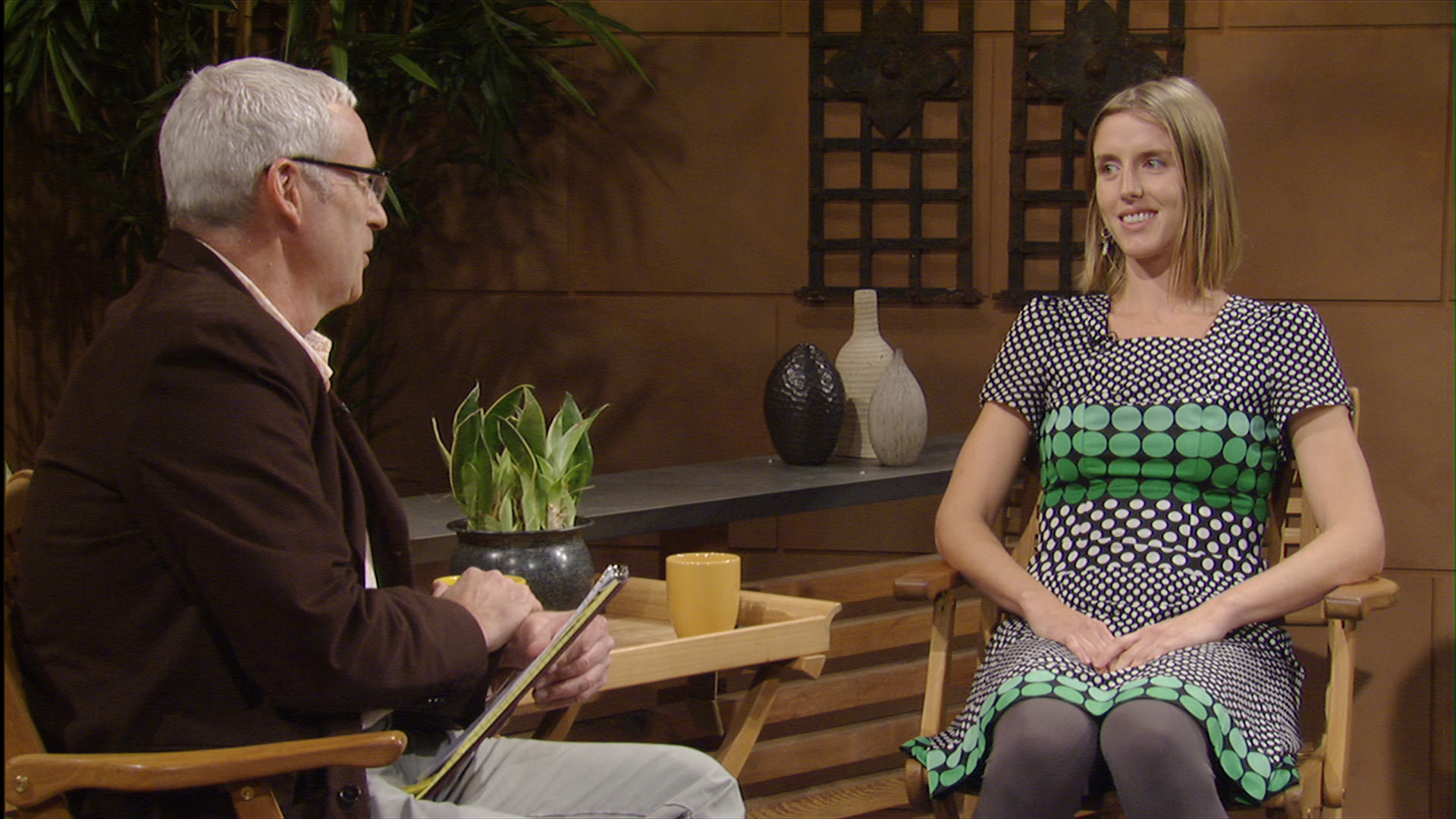 What is a mushroom? Ashley tells us that it’s the fruiting body of an underground network called a mycelial mat. This mat is interspersed among all habitats. If you see a cobweb sort of structure under the soil, that is the mat. 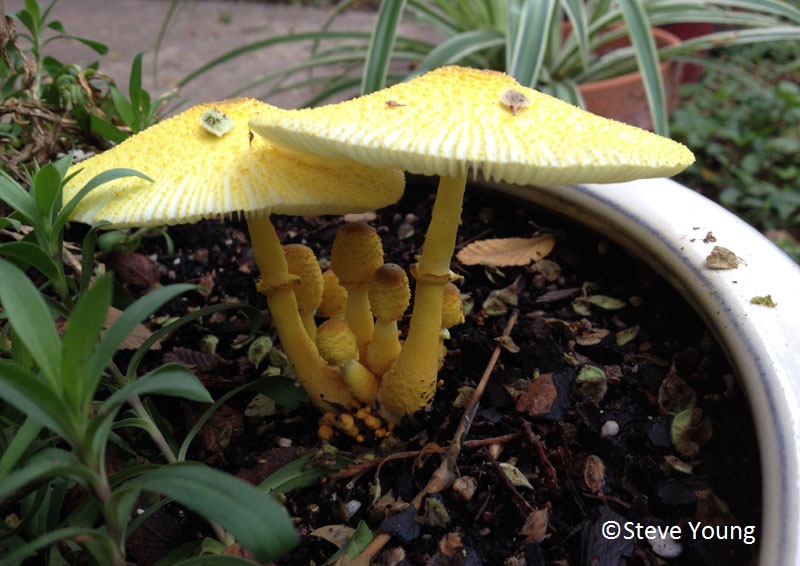 The mycorrhizal relationship between plants and fungi, like mushrooms, is very beneficial for plant health, soil fertility and drought tolerance, to name just a few. You can buy mycorrhizae, but if you’ve got mushrooms, it’s free! 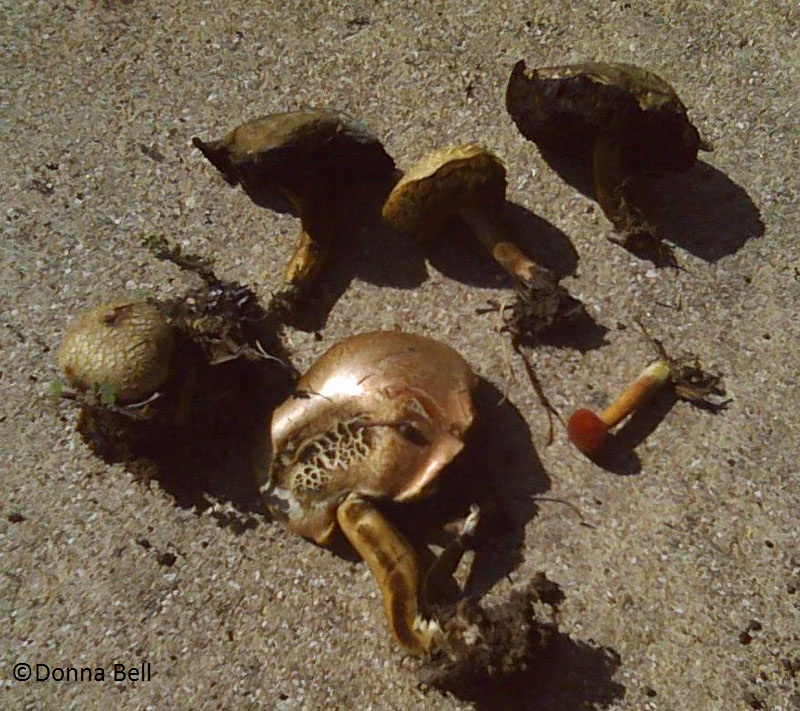 Ashley describes the habitats where they’ll pop up in our gardens, why they emerge after rain when soil temperatures are cool, and how to collect their spores and encourage more. 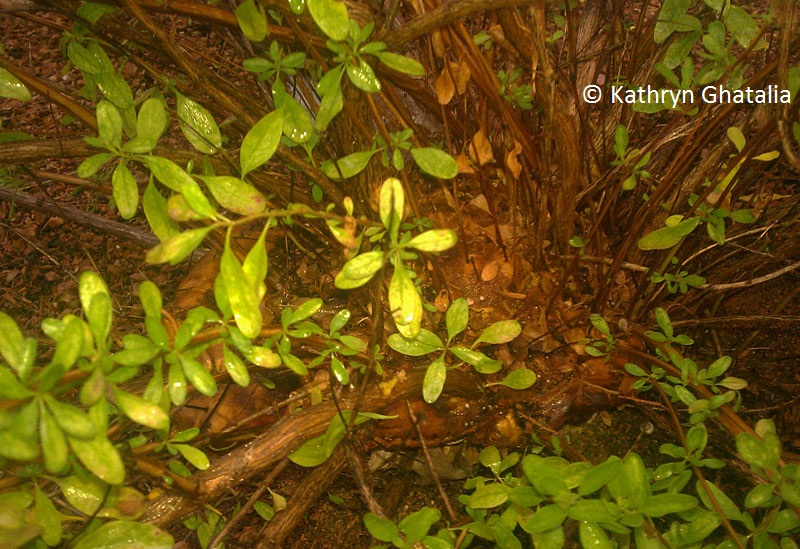 Check out the Texas Wild Mushrooming Meetup group to join them for their educational and fun “flash forays” after a rain to learn what is edible. 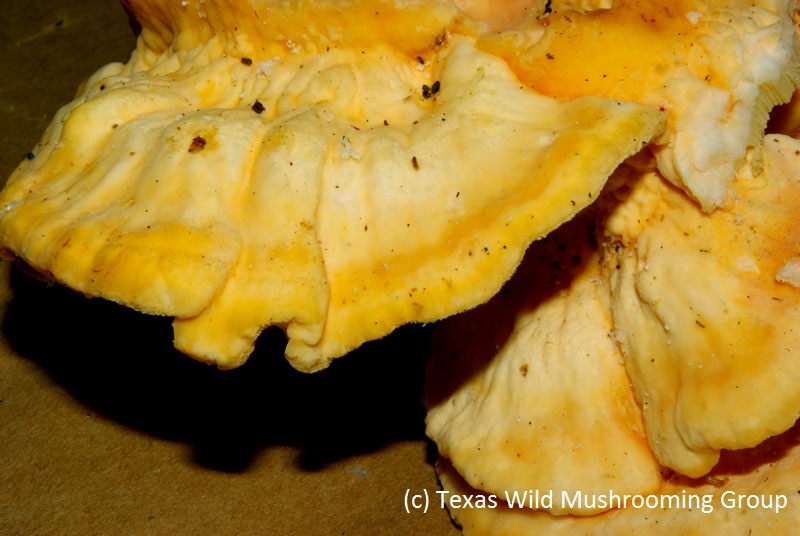 Until then, certainly don’t eat anything from your garden—just let them feed your plants! 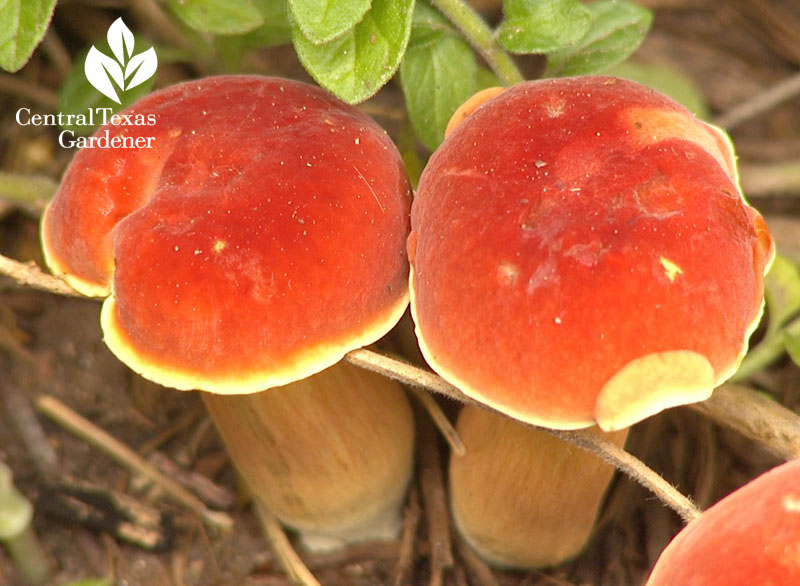 Find out more about mycorrhizae benefits from Texas A&M.

In Austin, South Austin Mushrooms is supplying Oyster and soon, Shitake mushrooms, if you want to grow your own edible ones! For now, they’re only on Facebook, but will have their website up soon.

Pruning’s on our minds, so let’s not forget those trees on our to-do list! 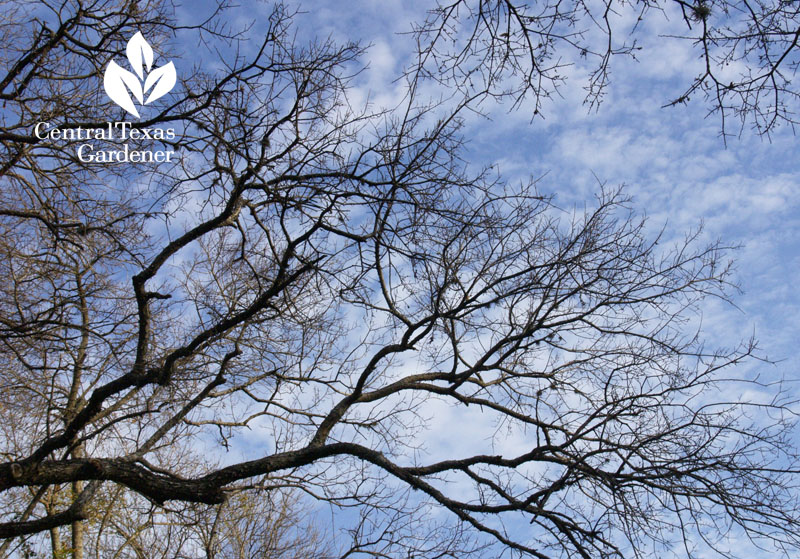 Daphne explains why to prune in winter while they’re dormant. “Their plant sap, which contains water, nutrients and hormones, isn’t actively flowing at this time of year. This means that the cut surface won’t have lots of sap rushing to it, as it would in the spring, which would attract insects and disease spores—which are also more active in warmer weather—to the source of a direct route into their body.”

Still, we want some sap flow to naturally heal the cuts. SO, you don’t need to paint cuts on most trees, since that will impede natural healing. But, you MUST paint cuts on red oaks and live oaks immediately to protect them from the beetles that vector oak wilt. You’ll want to get those trees pruned in the next few weeks. 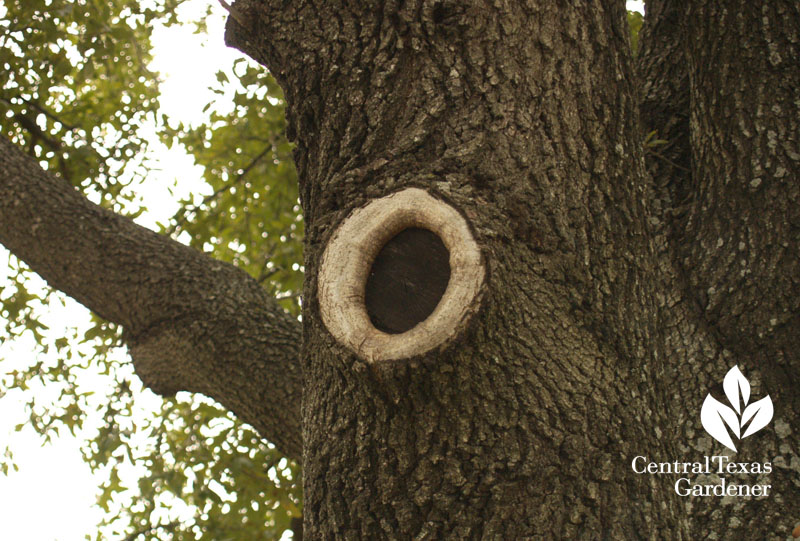 Ah, now about pruning everything else! Relax: there’s no reason to scurry around to tidy up. Top growth can protect roots, grasses hide overwintering butterflies, and seeds feed hungry animals and birds.

Instead, take a winter walk in your garden to simply revel in its beauty. 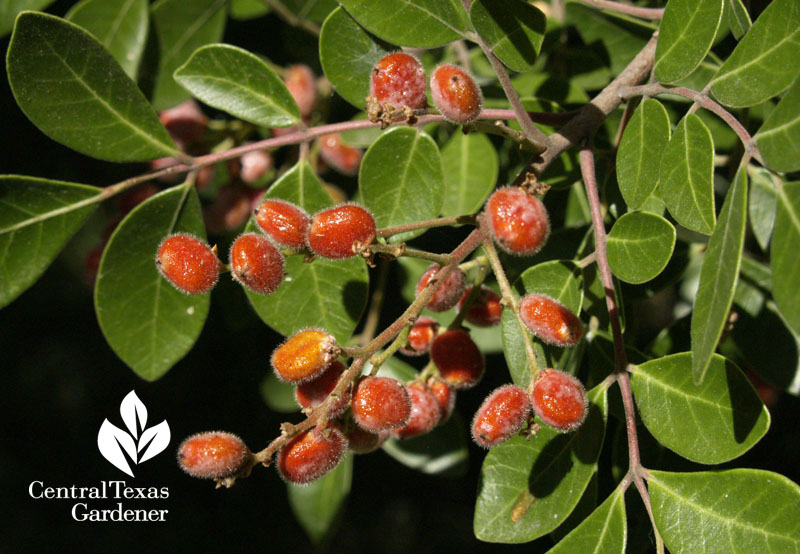 Turn off your editing mode and absorb its graceful shapes and textures and how the light plays upon them. 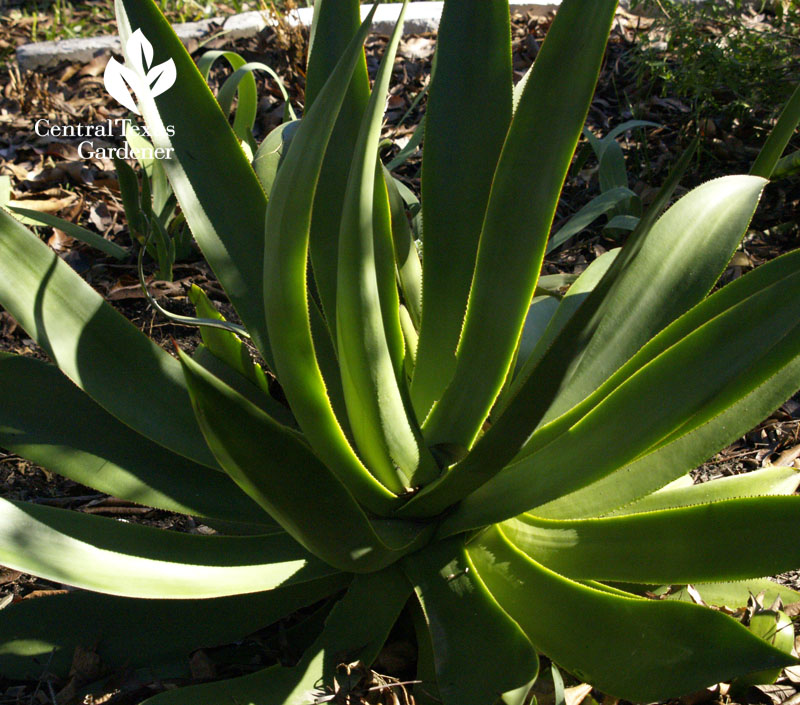 Instead of clamping those pruners, ponder the mystery locked into each seed head. 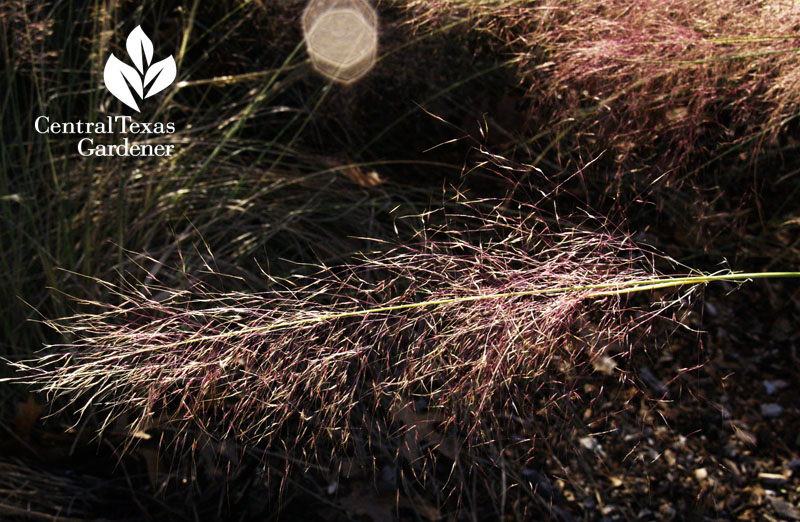 Then, just gush over the intense colors that only come with frost. 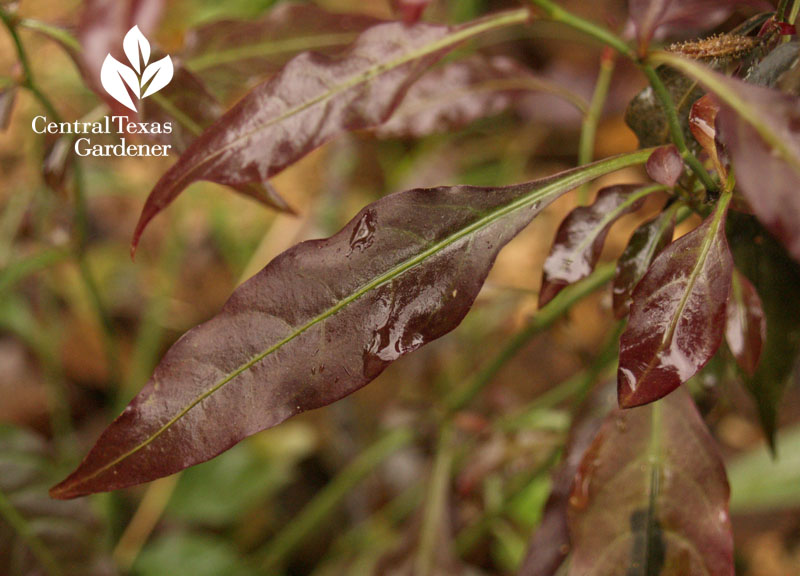 We’ll get into pruning next week! For now, take a winter wander through Lynne and Jim Weber’s garden, where wonder never takes a break.

Follow the seasons (including mushrooms and slime mold!) in their very hands-on guide to natural life in Austin. 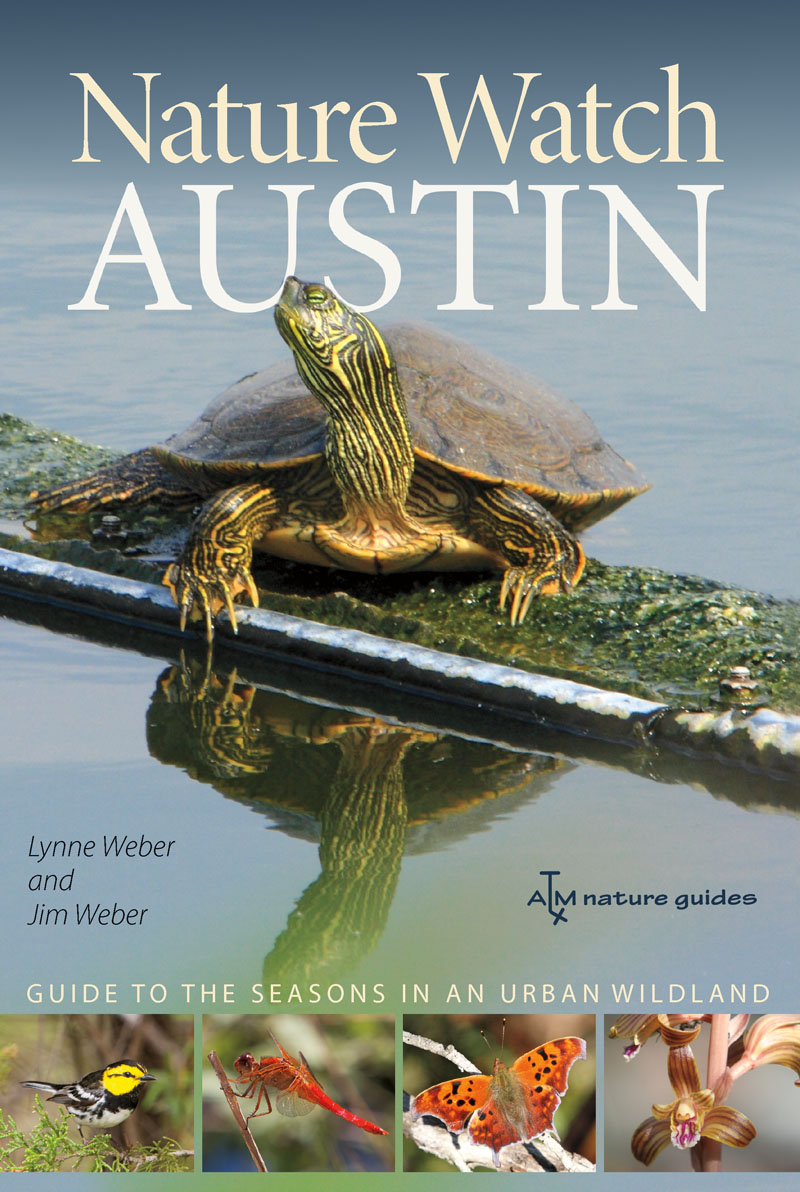 We can plant many things, like Daphne’s Pick of the Week, Mountain pea (Orbexilum sp.). 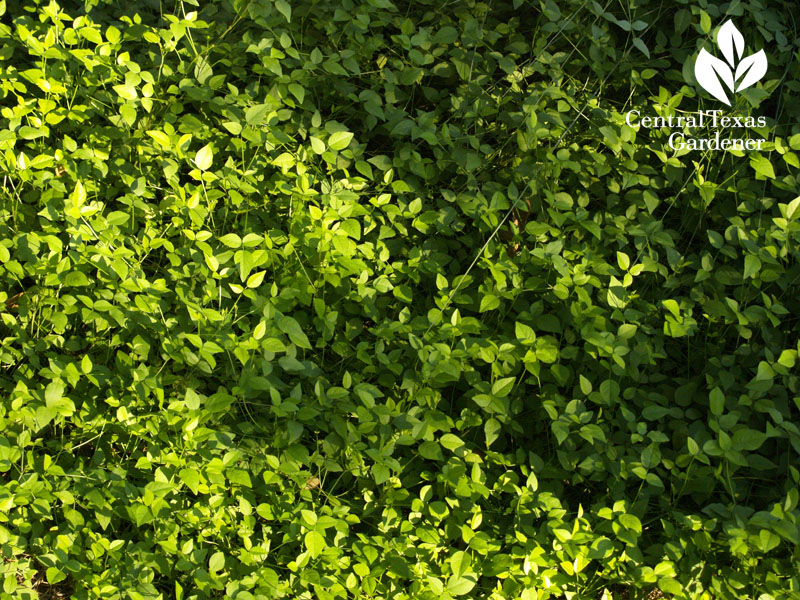 If you want the perfectly behaved plant for sun or even shady spots (like under your oak trees), this one is for you! As a 2’ tall “groundcover,” its tidy leaves and rounded form make a great foil against other textures. In fall, tiny flowers are simply a bonus against its evergreen simplicity. 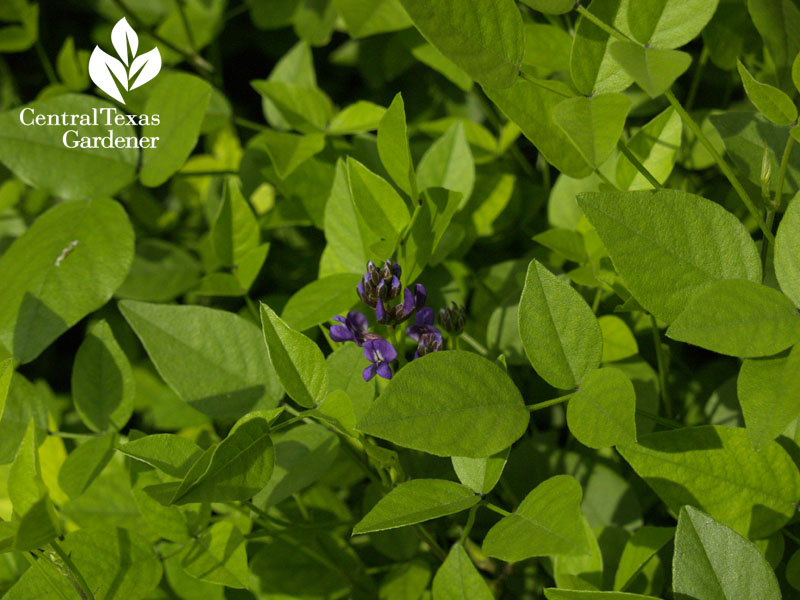 I first met it years ago when Pat McNeal introduced it on CTG as a lawn replacement. Then, it was harder to find, but thanks to growers who recognize a good thing, look for it at your local nursery. I nabbed one (and more to come) from Michelle Pfluger at Green ‘n Growing. Here’s her CTG list for other great groundcovers.

Plus, while it’s still cool, we can get after those projects on our lists—like structures to wrangle vining plants and upcoming tomatoes. Trisha shows you how.