For three weeks now, I’ve inspected my Mexican plum early every morning when I feed the birds and squirrels. Last February’s sweetly-scented flowers literally got nipped in the bud and this year’s drought (and the freeze) stressed all our plants. So, I squinted for any sign of swelling buds. And then on that furiously windy day last week, a brand-new flower gently unfurled, signaling a glorious come back. 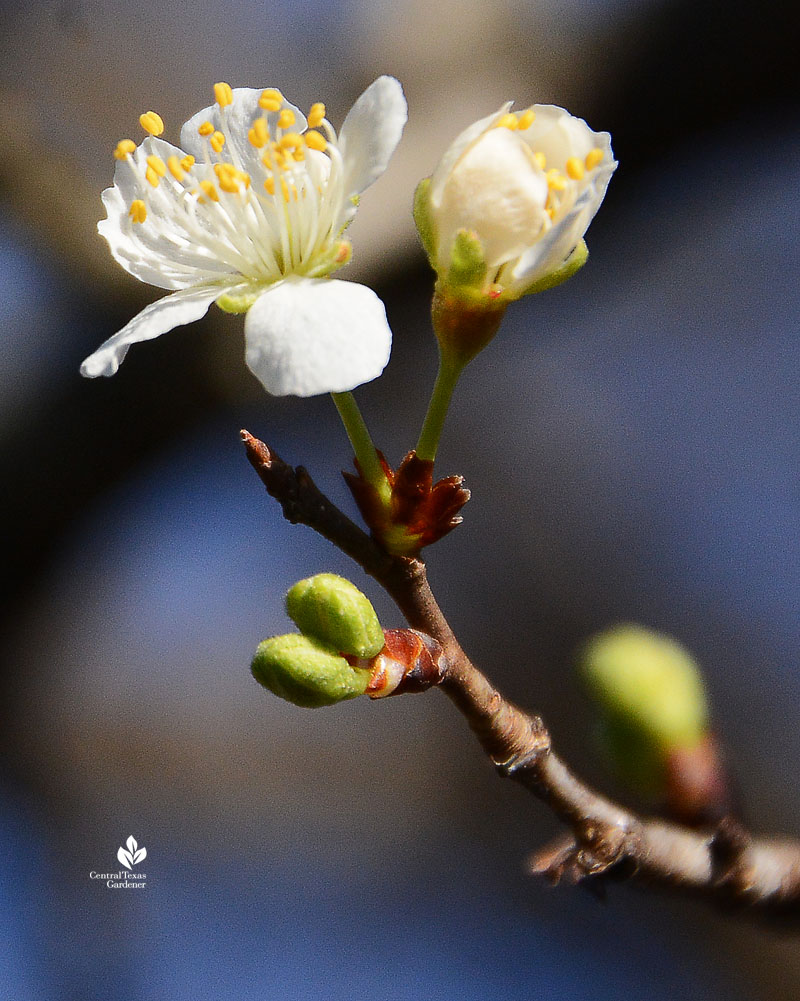 Then I realized that the bulbs hadn’t shown up. Just before Valentine’s Day 2021, they were so bountiful that I cut handfuls of fragrant bouquets when frosty rain ushered in the big freeze. 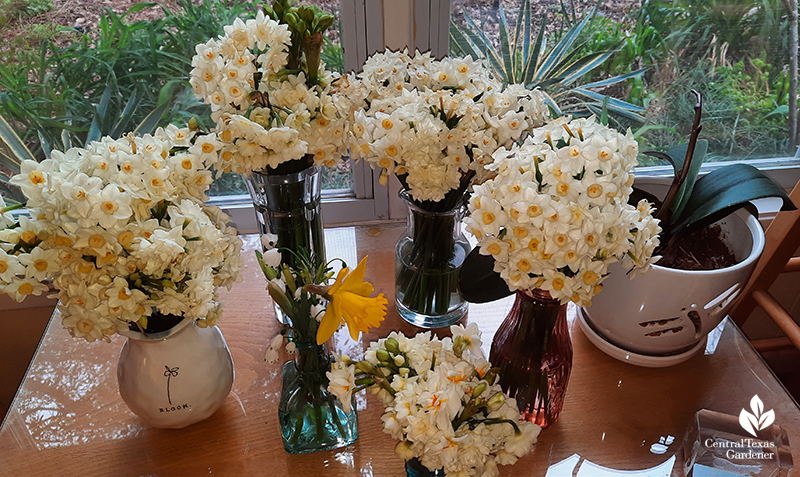 Narcissus ‘Marieke’ was in bud when I rescued it, opening 24 hours later in its warm water vase. Even when the power went out, all the flowers were fine, including Leucojum’s tiny white snowdrops. 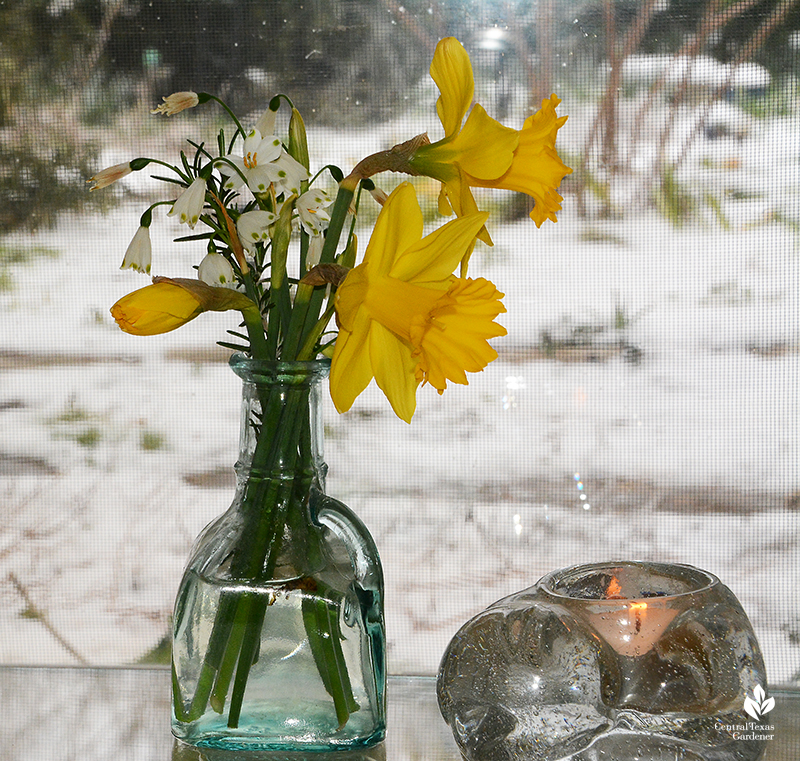 But this year is quite another story. This year, ‘Marieke’ just popped up from under the now cut back asters. 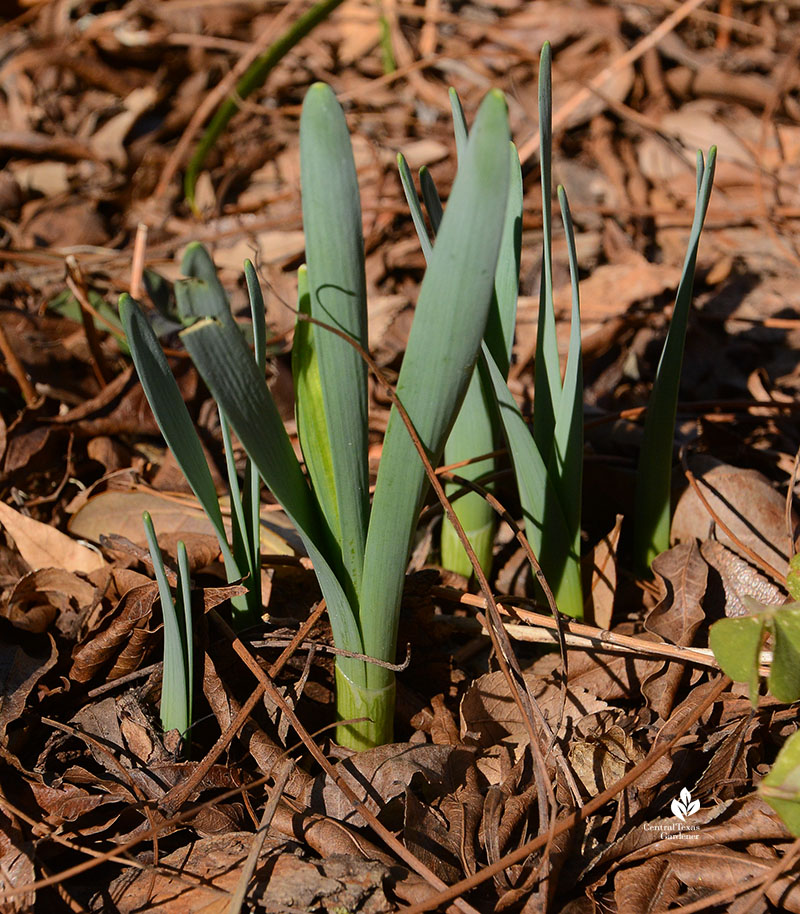 Narcissus ‘Erlicheer’ has always been true to its name—the first to bloom—sometimes even in late January as it did in 2021. 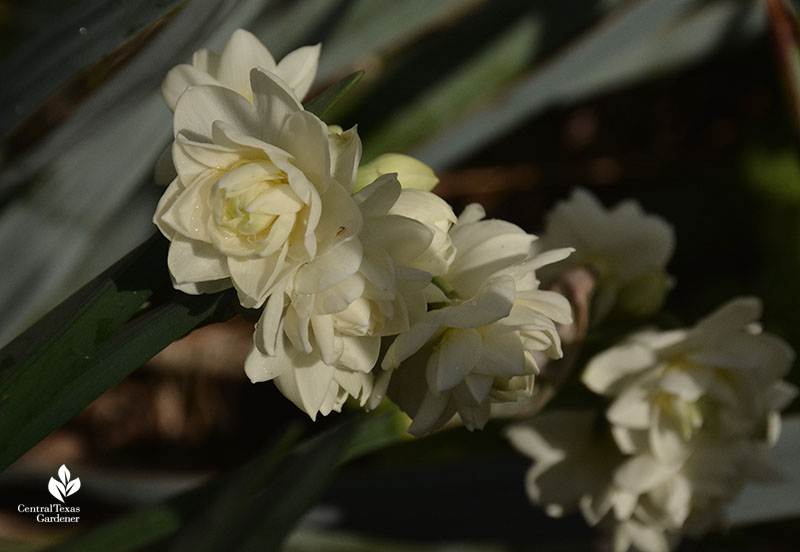 Typically, they stand tall against nearby Yucca pallida. This winter, they’re inches shorter and buds are just now forming. 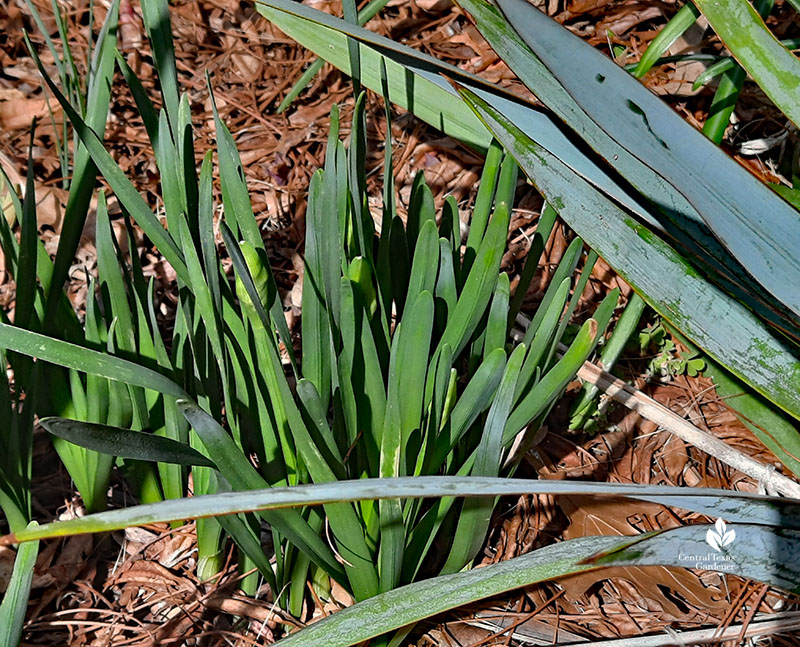 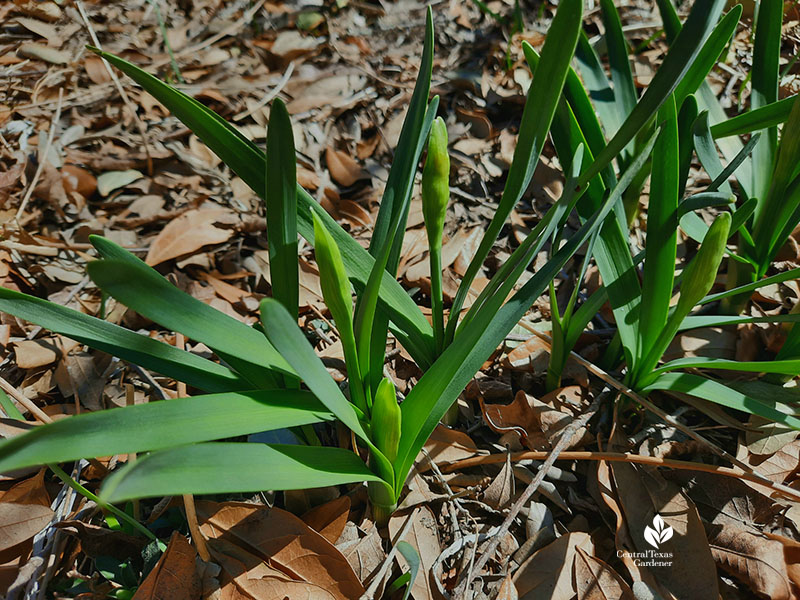 I don’t know the factors that contributed to this year’s performance, though others report the same experience. I did find this from New Mexico State University in an archived January post: “There must be moisture in the soil for good flower stalk development to occur.” And, you know what: we missed out on significant rainfall last fall and the first weeks of winter. 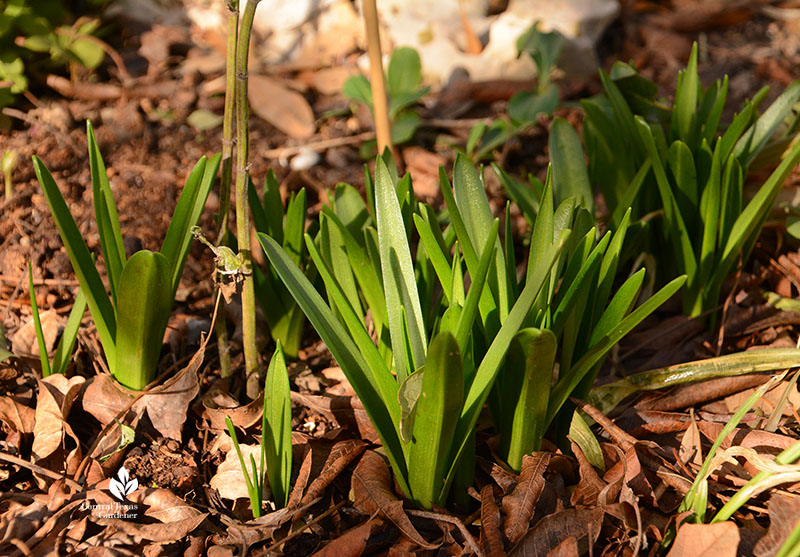 Typically, rain in late August and early September prompts fall-blooming oxblood lilies (schoolhouse lilies) and spider lilies (Lycoris radiata) to bloom. Last fall, after weeks of drought, flowers showed up late and somewhat on the skimpy side, if at all. 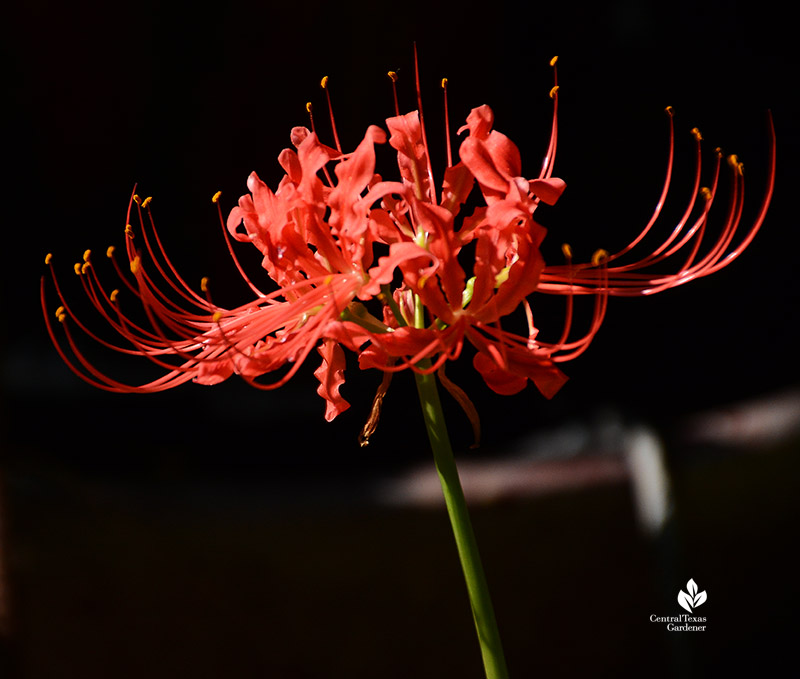 Still, their robust winter foliage reminds us that they’re still growing strong underground, gathering nutrients for next year’s flowers. Obviously, this little group of Lycoris needs dividing, and perhaps I’ll get around to it once their foliage browns up! For now, their lush deep green contrasts nicely against bamboo muhly’s freeze-nipped foliage (I’ll cut browned canes to the ground once we’re definitely past frost nips). 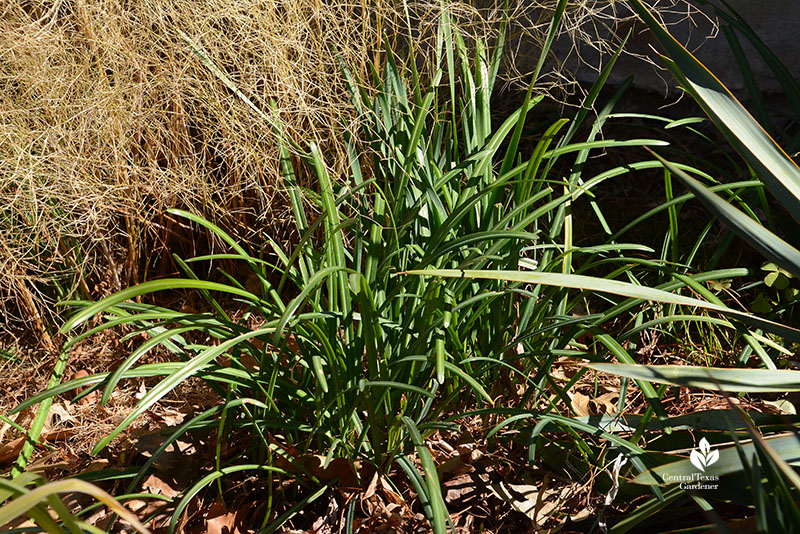 Over the years, I’ve planted bulbs that bloom progressively from early winter to spring, so even though I missed out on the “early” part, I anticipate some flowery fun soon. 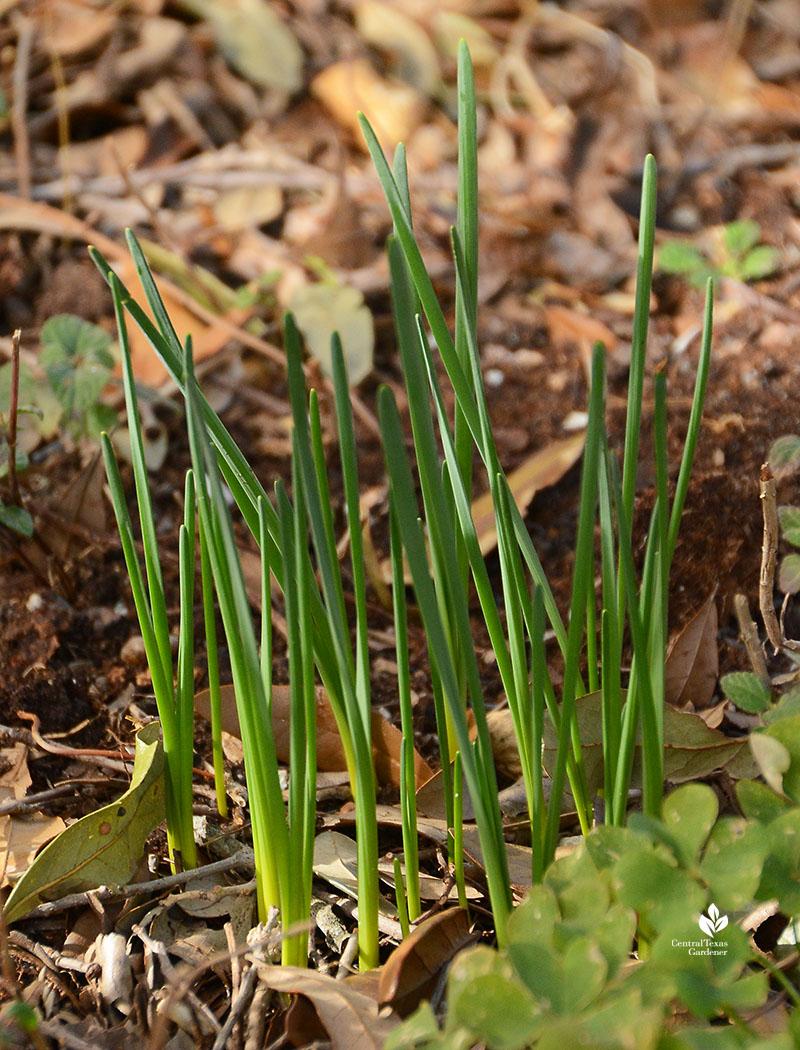 They entertain their garden sections while dormant perennial companions gradually leaf out. 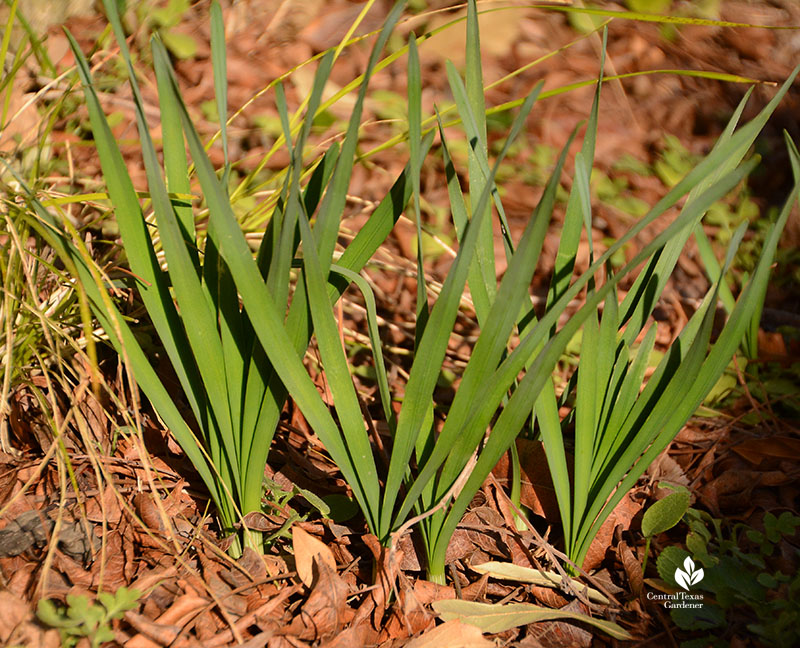 Sometimes you just have to accept reality, especially when it comes to weather and wildlife. Anxious squirrels dug up most of my fall-planted wildflower seeds. In a bed where I’d seeded lettuces, arugula, cilantro, and wildflower seeds, a family of raccoons tossed whatever the squirrels had missed.

Fortunately, over the years, my native wildflower Texas baby blue eyes (Nemophila phacelioides) had “banked” hundreds of seeds underground. And for me, it’s not a disappointment that in a few weeks this spot will be a field of blue, buzzing with bees of all kinds. 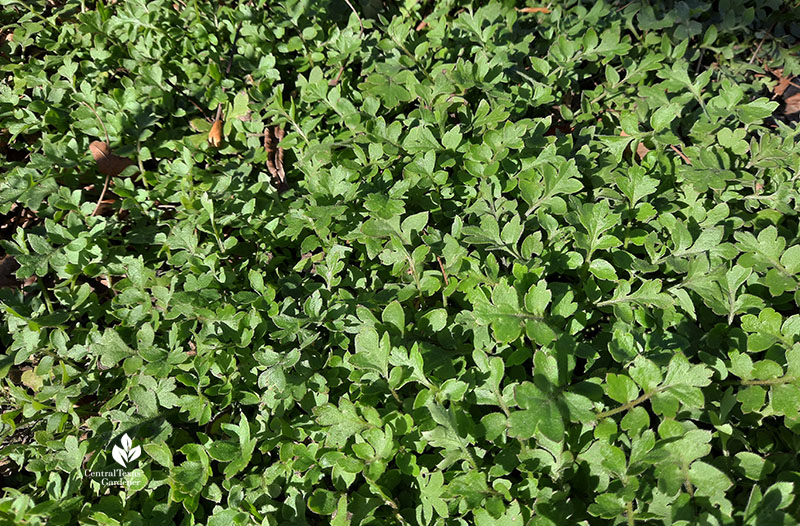 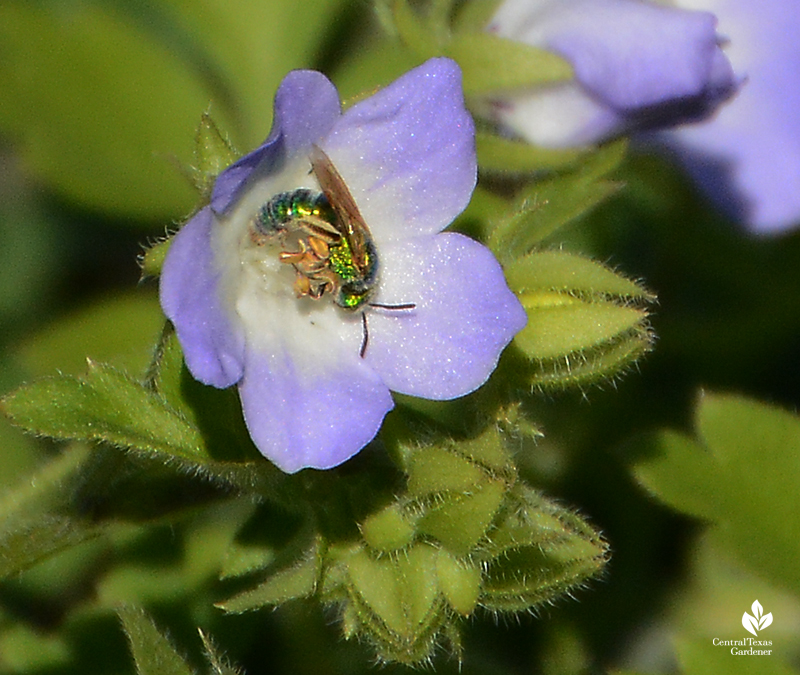 In another bed, a Thumbelina-sized baby blue eyes bravely bloomed prematurely on its 2-inch stalk. These annuals go for part sun and companion beautifully with columbines. 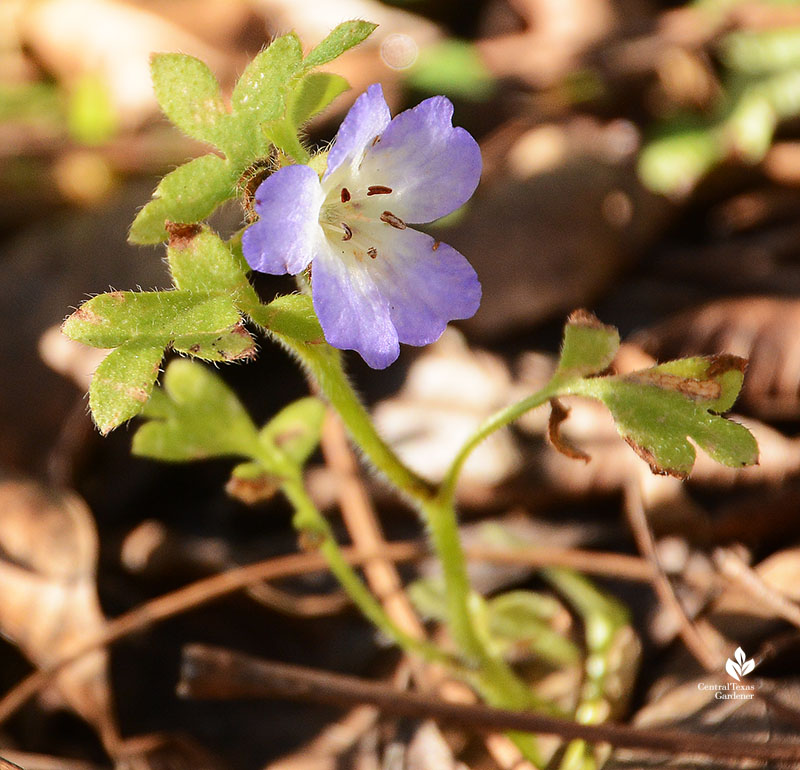 Spuria irises rocket higher daily, lining up for their flower show scheduled for April. Winter-toned inland sea oats warm the back stage, until I shear them to the ground this weekend. 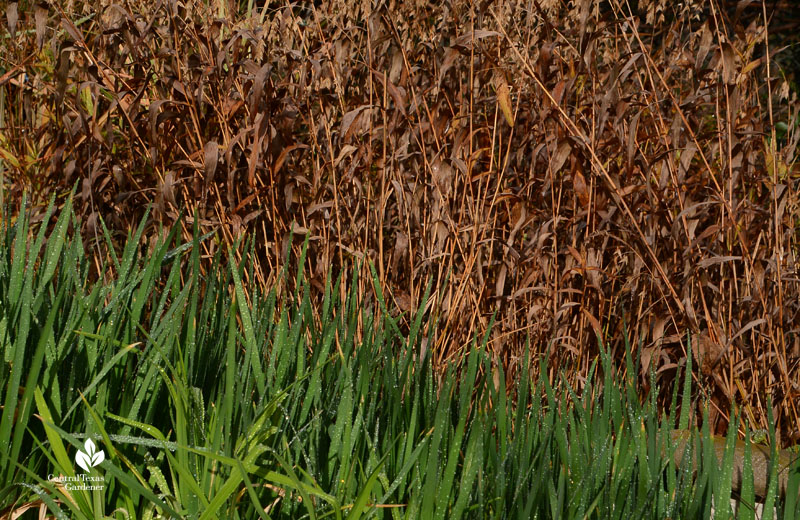