What life changes did you make during the pandemic? Leigh’Ann and Jordan Andrews started an urban farm. 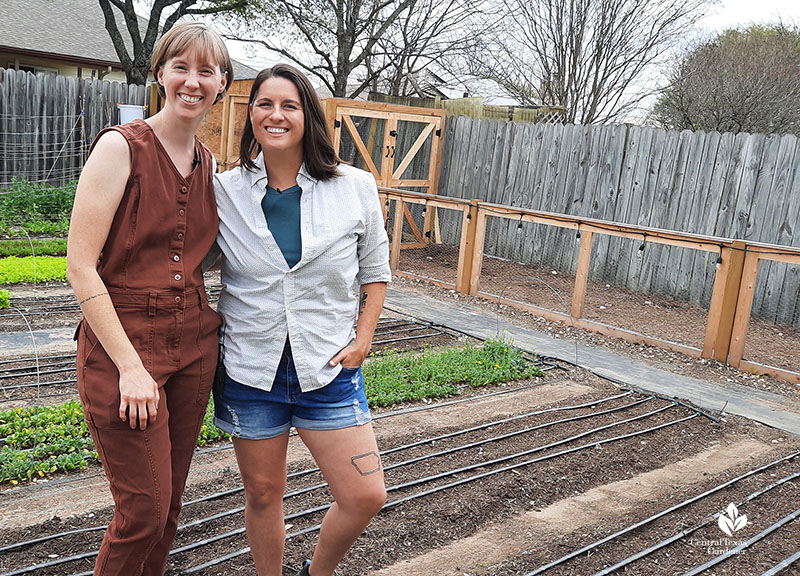 After 12 years in theater stage and production management, when the pandemic shuttered jobs in the arts, including theirs in Seattle, they turned the spotlight on a dream cultivated since grad school: growing healthy food for their community. 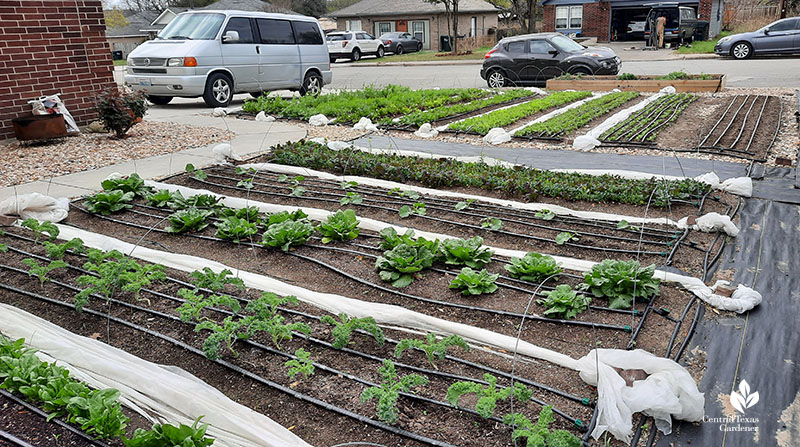 They were born in Texas, so headed home in fall 2020. They bought a house in Kyle and turned its front and back into vegetable crops, naming it Billie & Jean’s Farm after their path-guiding grandmothers, Billie Rea Ebersole and Jean Daniel. Sadly, they lost Jean late last year, so we dedicate this story to her! 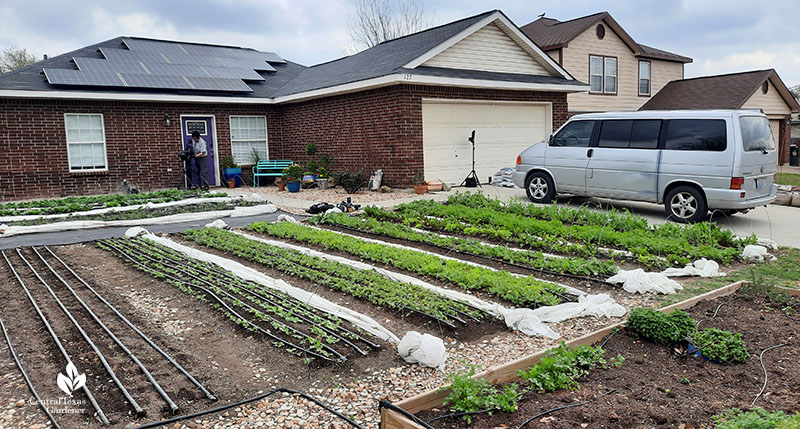 They had never gardened while growing up in Texas and attending TCU. That started in Iowa when Leigh’Ann was a grad student studying theater stage management and funds were short. In exchange for a CSA box of food to feed them for a week, they volunteered at a farmers’ market. They liked it so much that they volunteered at their mentors’ farm, now Jupiter Ridge Farm—still guiding lights for them. 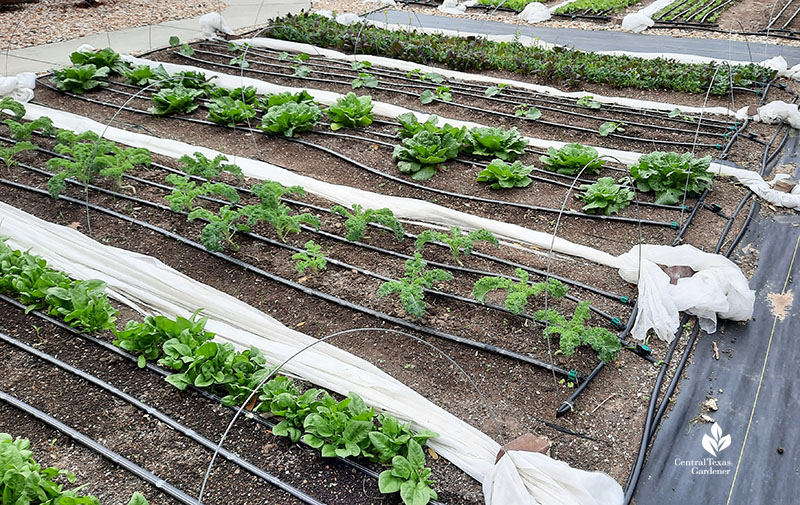 They continued growing food when their careers took them to Seattle (and helped feed colleagues during the pandemic). In Texas, they adapted their knowledge to tackle our soil and weather challenges. 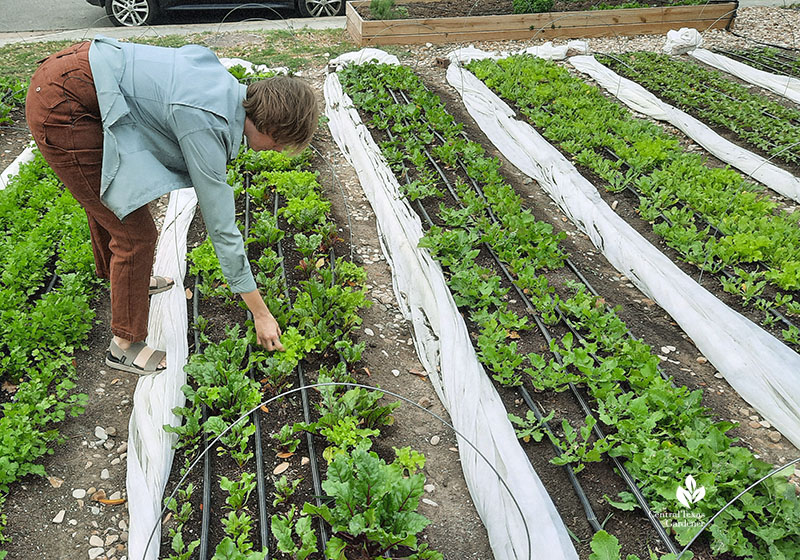 The first nine months in Kyle, Jordan taught theater production management at an Austin high school, the hardest thing she’d ever done. “I was supposed to be teaching in a theater with 20 kids making things, and instead I was in a classroom, an empty bare-bones classroom alone, on a camera. And as the farm started, then I would come home in the evening and pick zucchini and walk around and get to start helping on the farm,” she said. 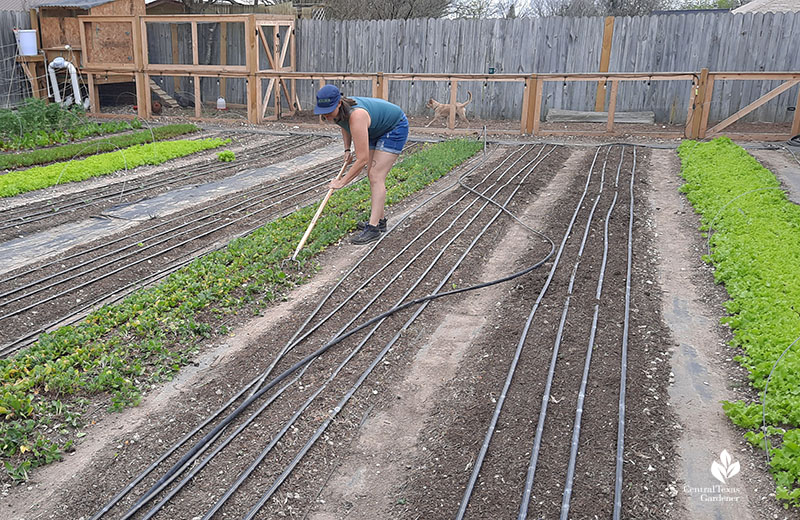 Leigh’Ann spent back-breaking days mapping out the beds and smothering Bermuda grass with salvaged cardboard, an astonishing feat! She ordered compost from the city of Kyle, and when it was delivered to their driveway, laid four inches on the front beds (the backyard came later). 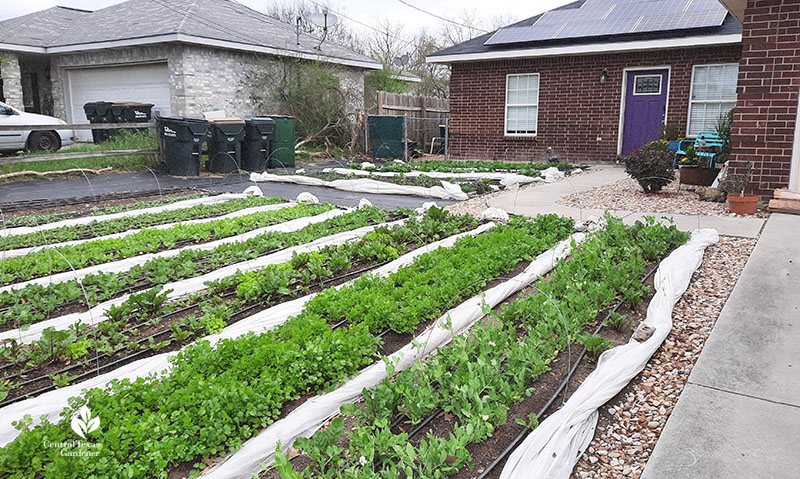 And then, after she laid the drip lines, they realized that the clay soil was so heavy that the beds weren’t draining underneath the cardboard, creating a big, stinky mess. They dug trenches between every single bed and then got another workout to fill them with 2-3” of river rock. Problem solved. 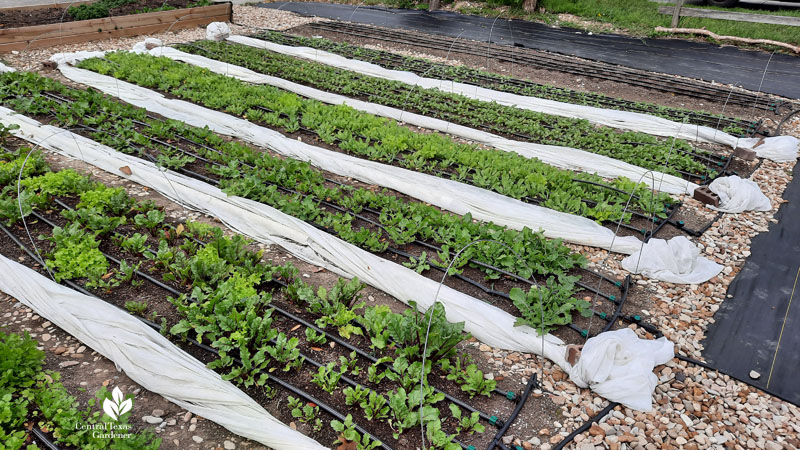 Water also pooled near the front door. They applied the same technique, which worked out fine. But this spot would never work for food production and Leigh’Ann and Jordan freely admit that flowers are not in their repertoire. 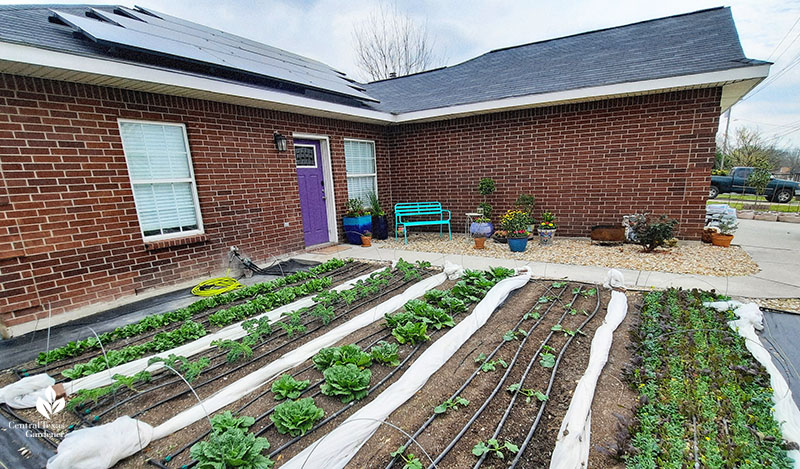 Jordan’s mom, Kelly Andrews, came to the rescue. A skilled designer of her Georgetown gardens, she created a welcoming, colorful entrance patio, including flowers for pollinators. I love her style! 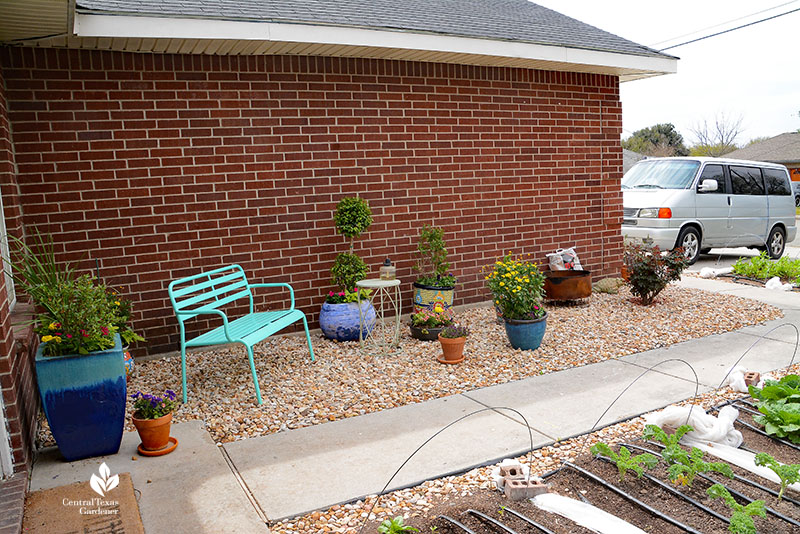 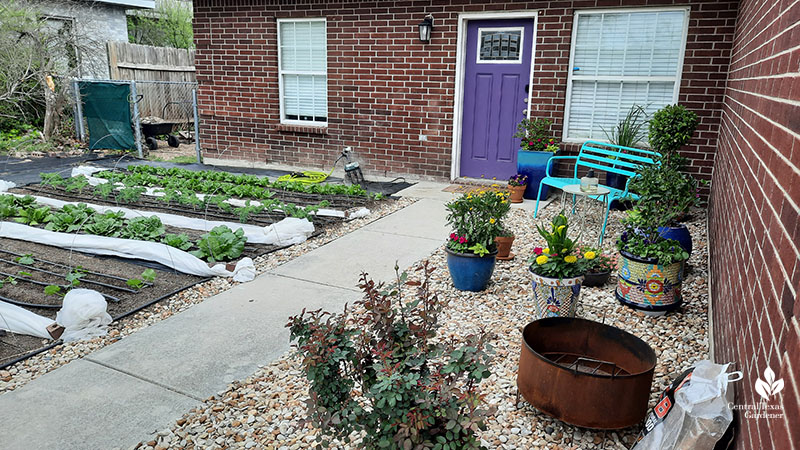 Leigh’Ann and Jordan recently added bins to make their own compost. With their heavy clay soil, they add compost at nearly every planting. 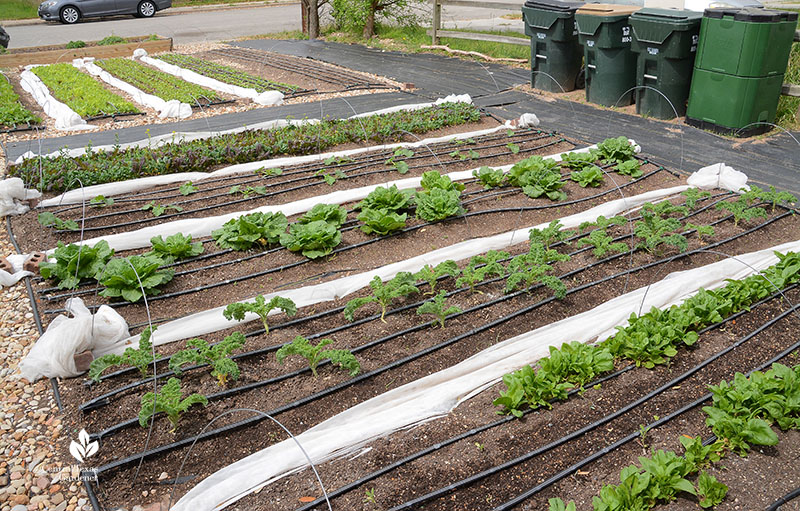 Then, they got six hens (all that Kyle allows in a homestead) to naturally recycle plant waste. 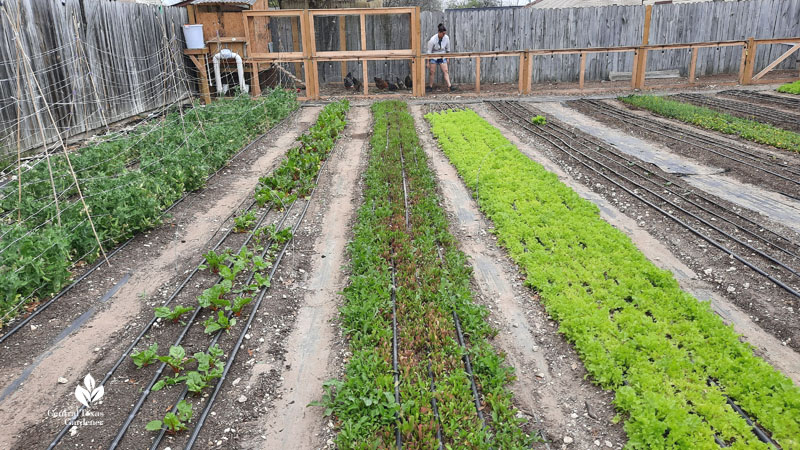 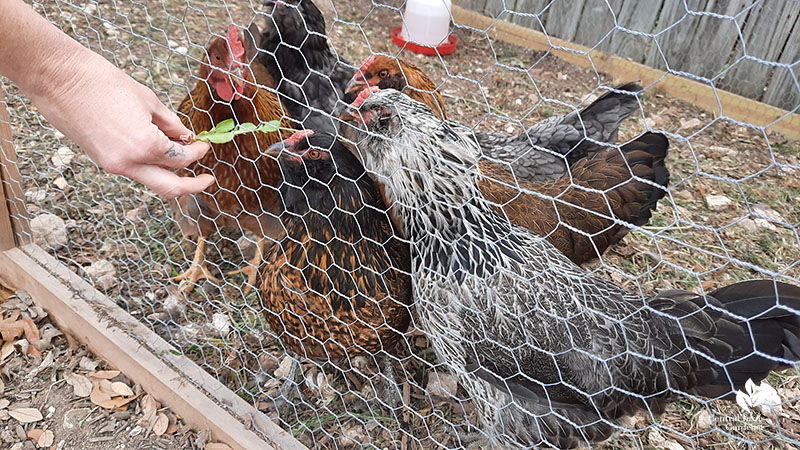 It was tough enough for them to lose their jobs, leave their friends, and move during a pandemic. Sure, this was the opportunity to follow their dream, but Texas weather didn’t make it any easier—tossing them every harsh challenge, including the big freeze of 2021. But, after years in theater (and working on farms), they’re skilled problem solvers! 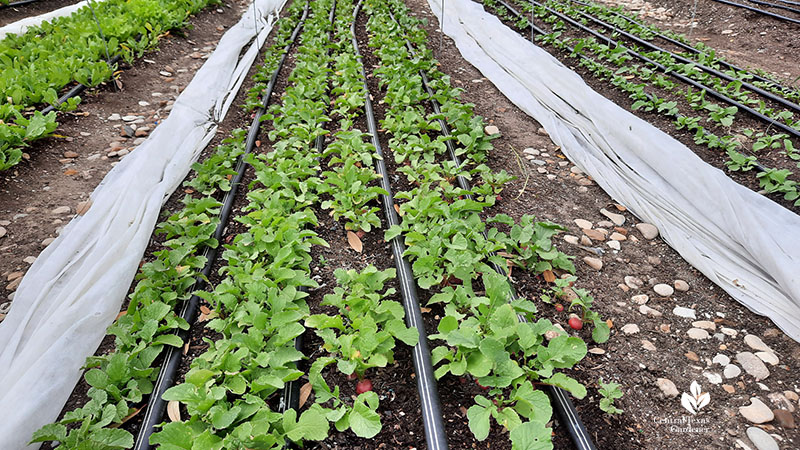 This year’s weather has been a pain in the neck already. Heat and freeze played cat and mouse with us. In early April, tatsoi’s bolting next to Red Giant mustard greens. Leigh’Ann and Jordan aren’t putting away the row cover just yet, since new squash plants are coming right along. Beyond, cool season cabbages will wind up soon. 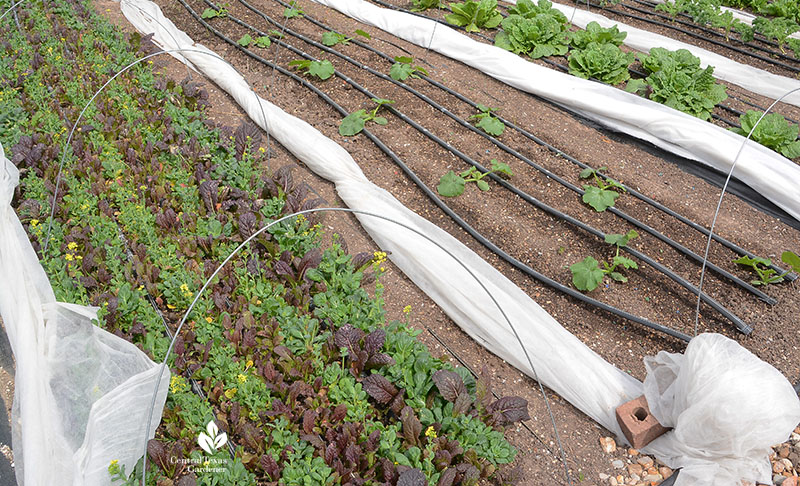 After fighting late freezes for a couple of years, they’re waiting a bit longer to set out tomatoes, peppers, and basil. 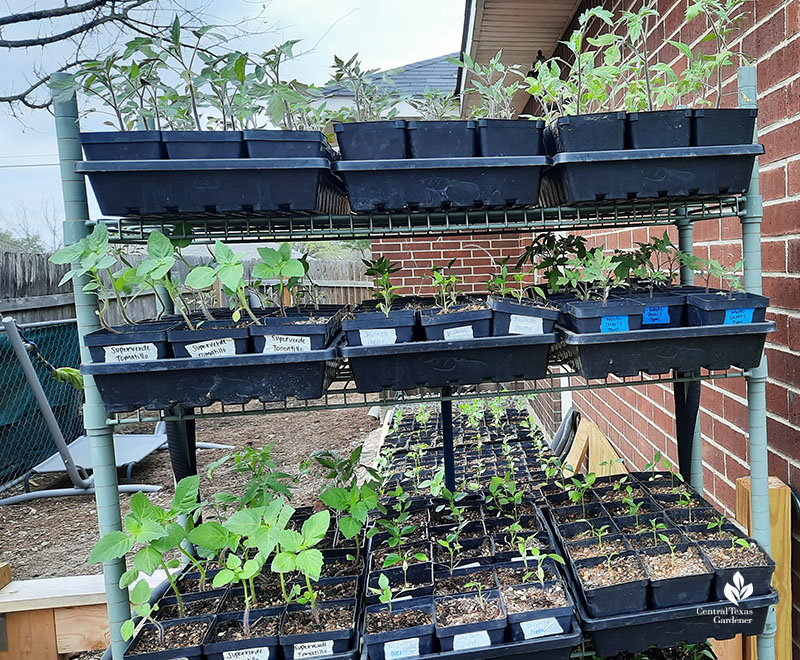 They try to follow the rules of crop rotation to keep the soil healthy and pest pressure down. Cool weather sugar snap peas fix nitrogen in the soil to feed upcoming tomatoes. 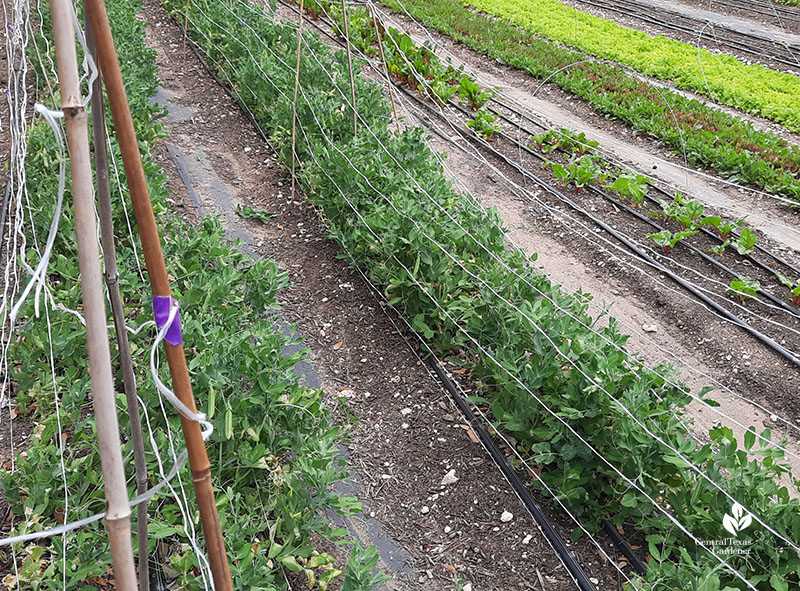 To make cultivation and harvesting easier, they grow in rows dedicated to a single crop. However, “We do allow mistakes to flourish on the farm!” Leigh’Ann said. With the battery of freezes this winter, they ended up seeding things three times. Lettuce got stuck in the seeder and when the weather warmed up, it cheerfully popped in among peas and beets. 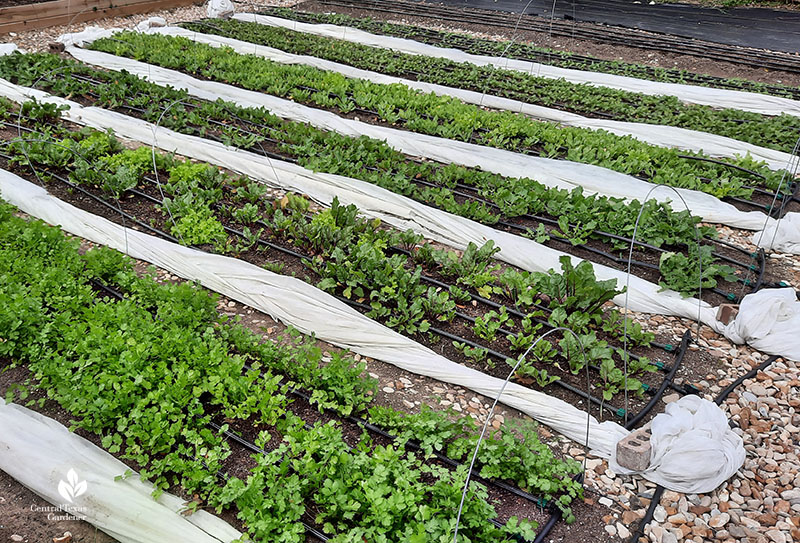 Root crops do extremely well for them, including Boro beets (they use the leaves in salad mixes, too) and Sora radishes. A new favorite is petite and sweet-tasting Hakurei turnips. These Japanese turnips grow very quickly and are absolutely yummy! 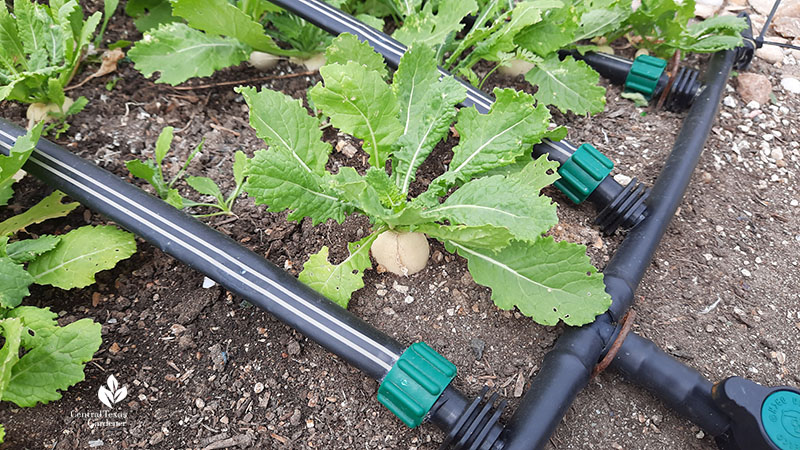 And then they grow microgreens, including pea and sunflower shoots. Microgreens are simply young edible plants harvested after first leaves develop. Jordan grows them in trays indoors under lights, harvesting nutrient-packed deliciousness in just seven to 14 days. 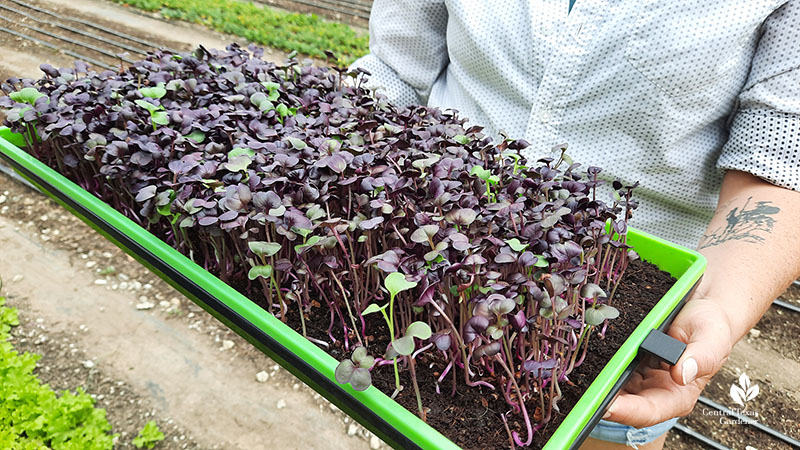 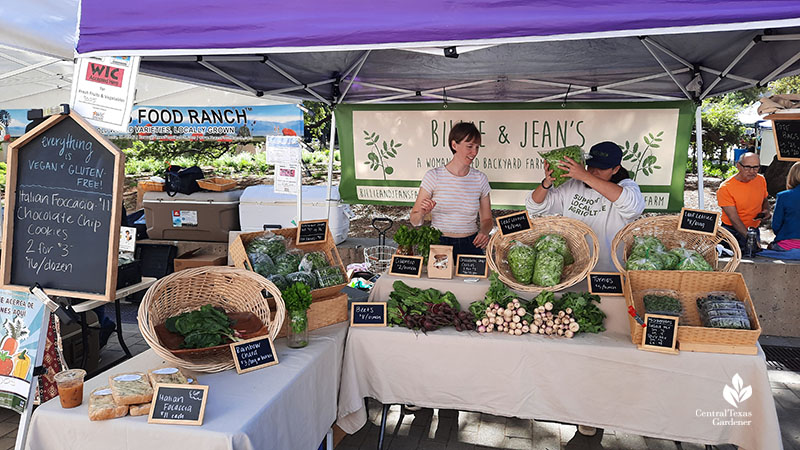 The Sustainable Food Center’s helped them from the start (including a Zoom talk they listened to on their drive from Seattle). Although skilled in management, budgeting, and planning, SFC guided them as new farmers through taxes, cottage food laws, grants, and more. 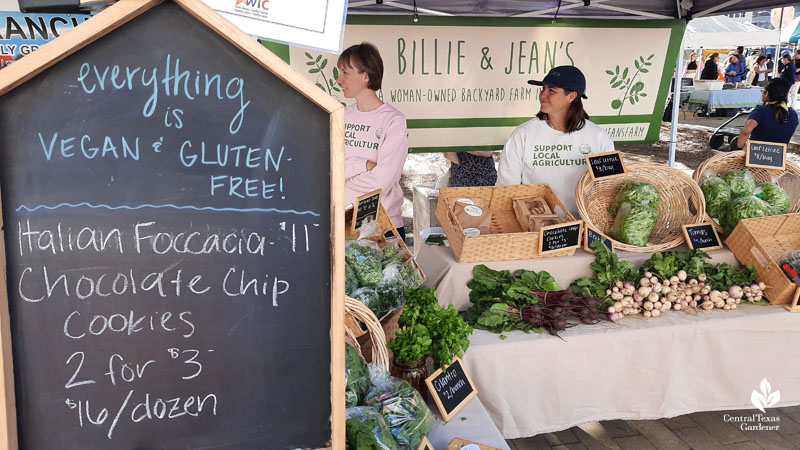 On Sundays, find Billie & Jean’s Farm at the Downtown Buda Farmers’ Market in Buda City Park. Be sure to snag a loaf of their gluten-free focaccia—it’s simply heavenly, especially toasted.

Support Billie & Jean’s Farm on Patreon to bridge the seasonal gaps in freeze and summer’s heat and drought. Support levels can include one-on-one Zoom conversations, farm tours, insider info, and recipes. “Something that we love to do is connect with our community and so we want to grow that online, not just for people in Central Texas, but for anyone,” Leigh’Ann said. 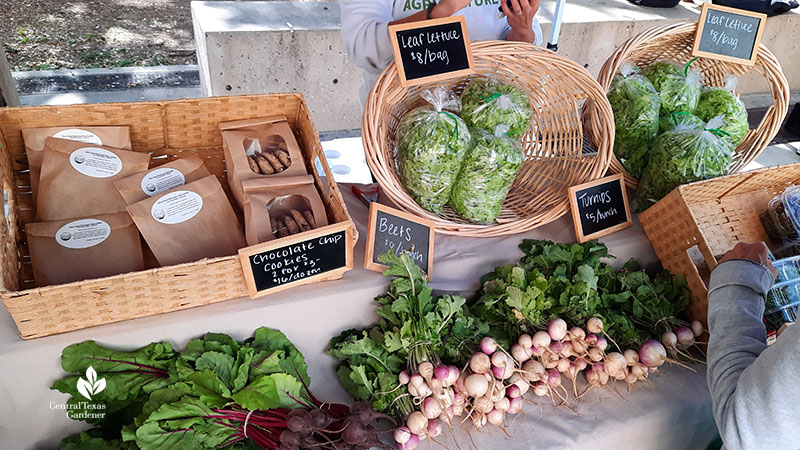 “We have always been passionate about healthy eating and local food and eating close to home and seasonal eating. And we always kind of knew that when we were done doing theater full time, we wanted to really invest our lives in our lifestyle, in eating that way. And we didn’t know what that looked like or what it meant. But this is what it’s turned into, and we’re so grateful for that,” Leigh’Ann said. 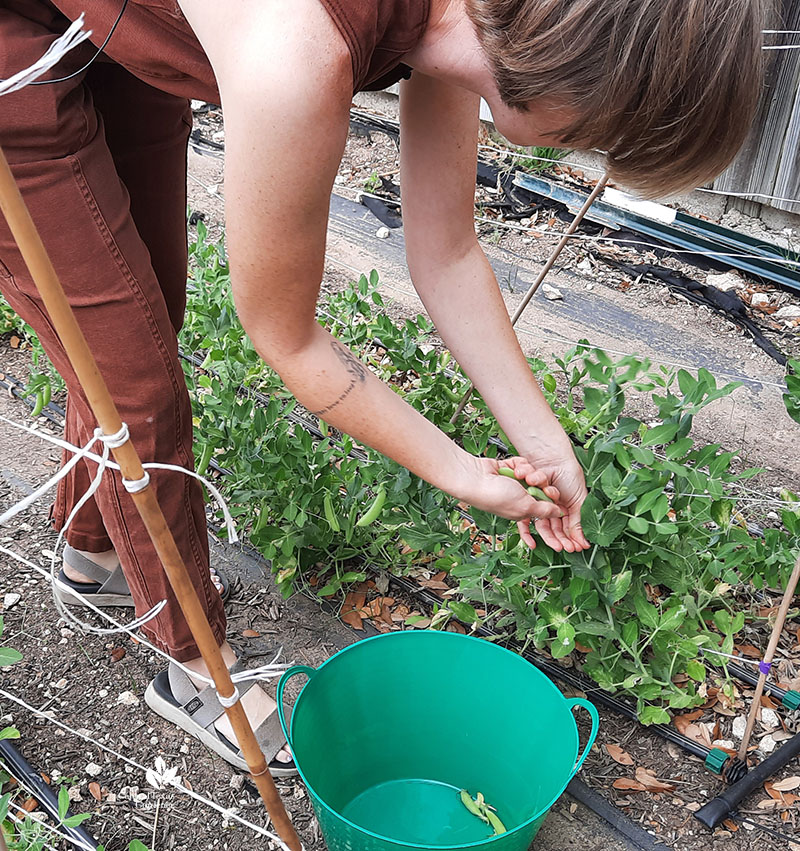 For Jordan, who took occasional Fridays off from school to help out: “There was a time to be outside, to be quiet, to think my thoughts and I feel like I processed the pandemic in a new job. I processed all of that out here on this land. So when I got to finally turn this into my full time job, I was so ready for it because this is this is truly my happy, my happy place.” 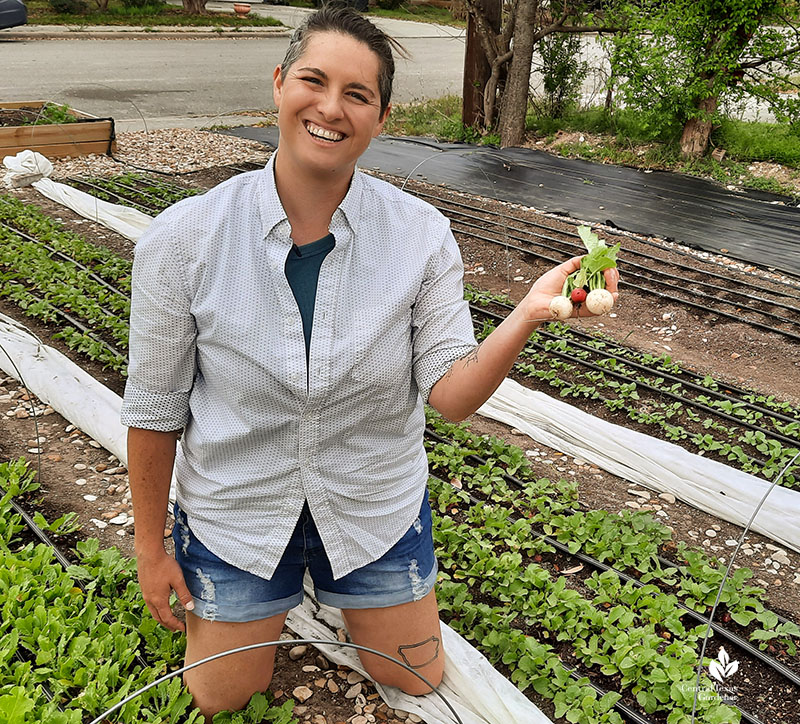 Check out their Instagram to see what’s growing on.

Thanks for stopping by,
Linda