“Oops, I killed my container succulent! What went wrong?” 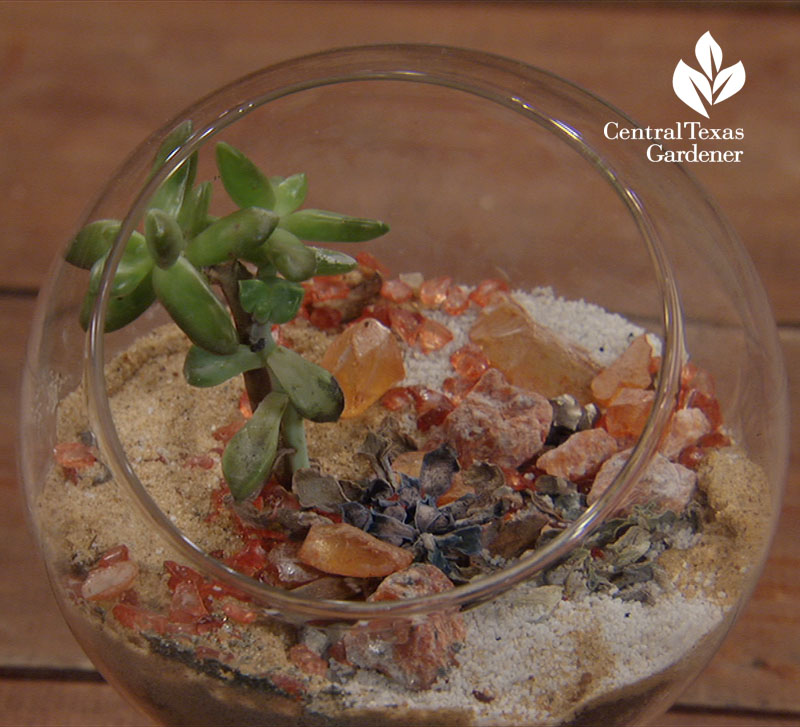 I get that question a lot and know why it happens. So, what did I do? I kill my baby echeveria in an indoor container (with a drain hole). I know better than to water in winter (or much). And there I go, dribbling in the tiniest bit of water. Bang: two days later it was dead. 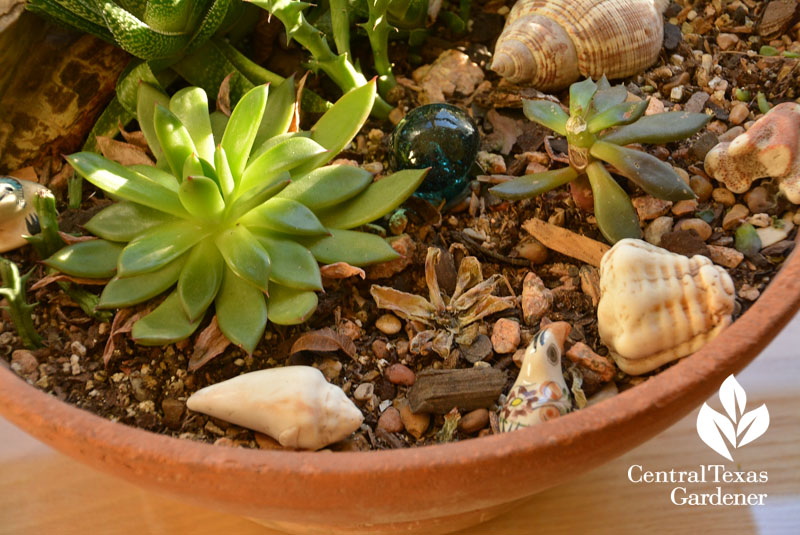 Daphne explains what’s often at fault: overwatering combined with lack of sunlight. “If the plants are not receiving enough sunlight for photosynthesis, they aren’t growing; and if they aren’t growing, they aren’t using water,” she says. Cautious watering is especially important in non-draining containers, since there’s no place for it to go.

I wouldn’t mind some water outside, though! Still, my recently dramatically pruned Salvia microphylla ‘Hot Lips’ popped its first flowers. 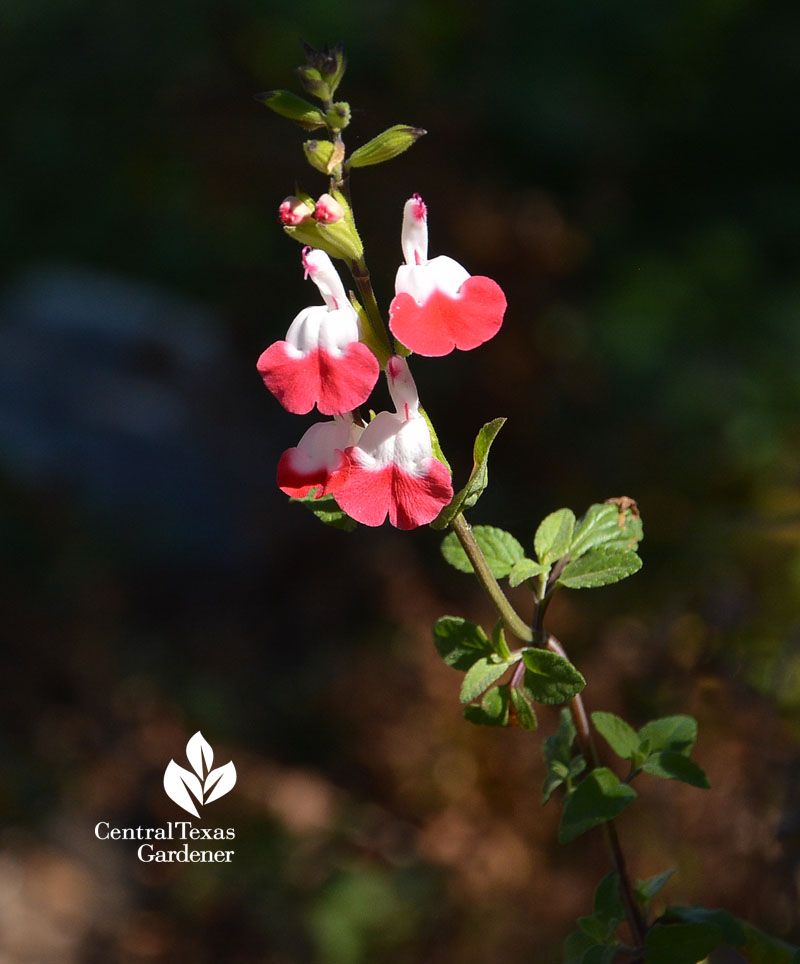 The ground’s so dry it’s hard to pull out my nemesis, hedge parsley or beggar’s lice (Torilis arvensis). When we had a cocker spaniel, it was a mess when he collected its sticky seed heads in his curly fur. 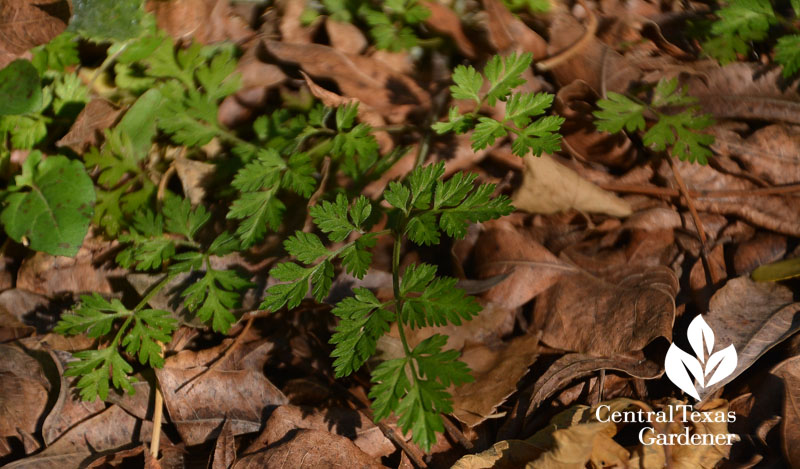 Its long taproot, giving it another moniker “false carrot,” doesn’t make it easier to pull in no-rain soil. 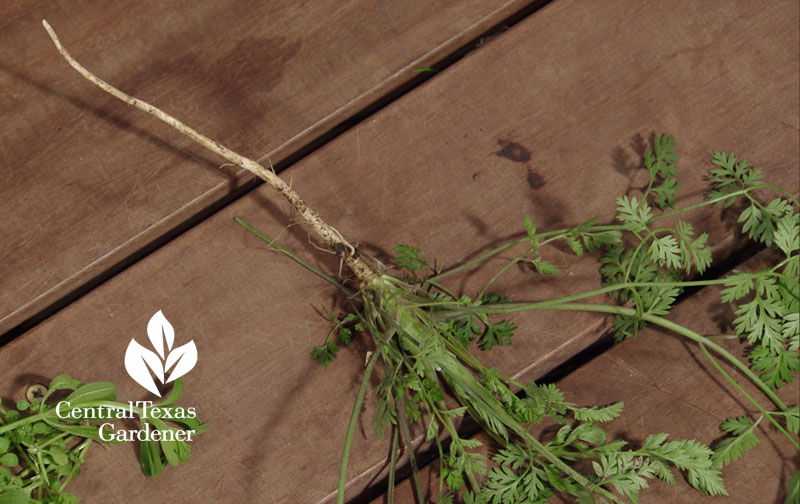 I don’t consider cute little henbit a pest, since its flowers attract tiny pollinators. And its seeds don’t stick to my socks and gloves! 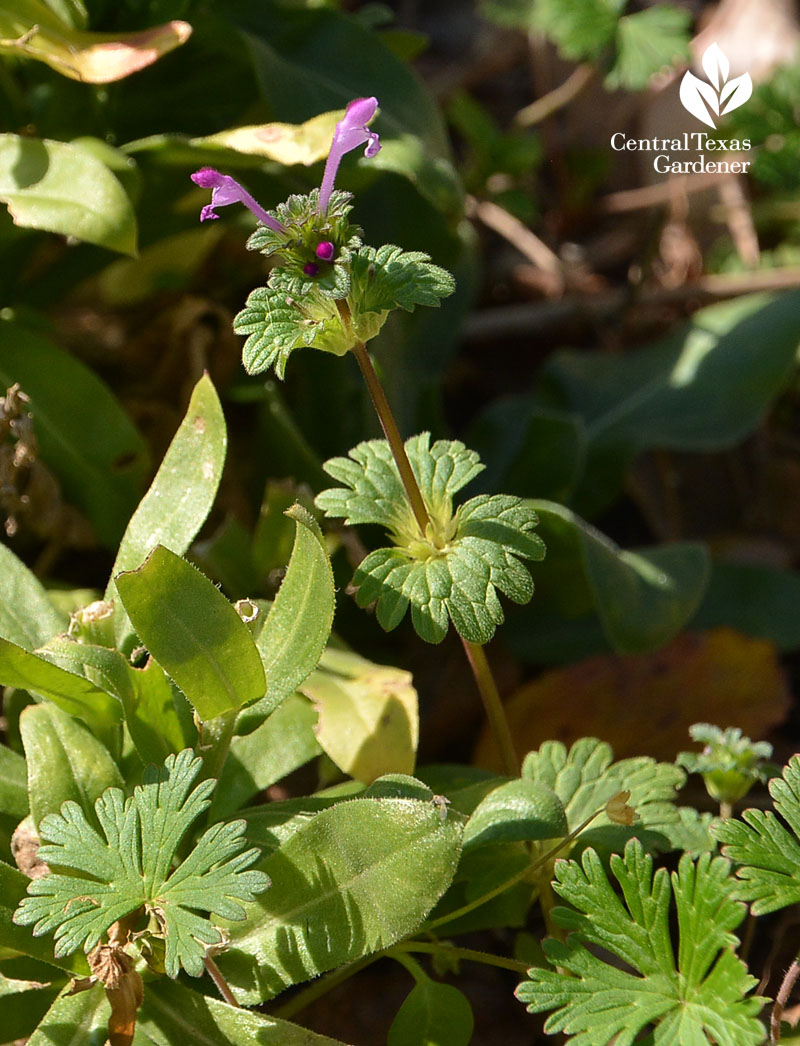 This week, Trisha explains how “weeds” can tell you a bit about your soil. Henbit, purslane and pigweed are signs of healthy, balanced soil. Dandelions and sow thistle have deep taproots that aerate and make minerals available to surface plants. 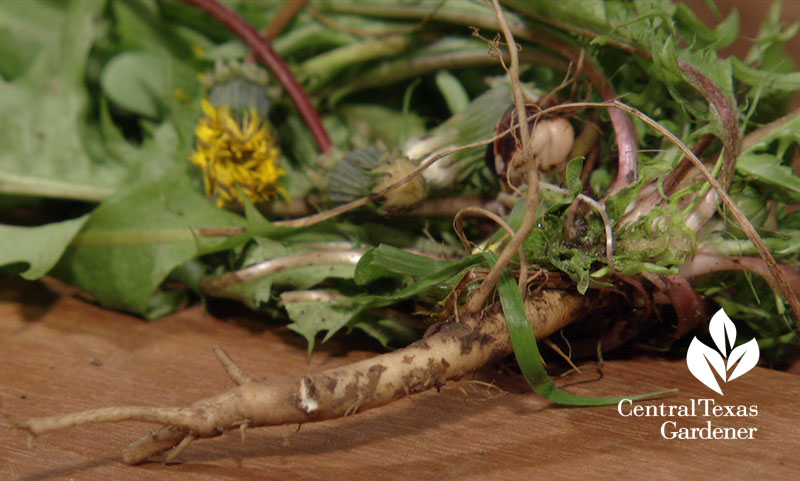 If you don’t pull or cut weeds before they seed, you’ll have them for years in the seed bank (like wildflowers). Herbicides are not the answer. Instead, Trisha puts these greenies to work in a nutritious weed tea to naturally nourish your plants. Here’s the recipe. 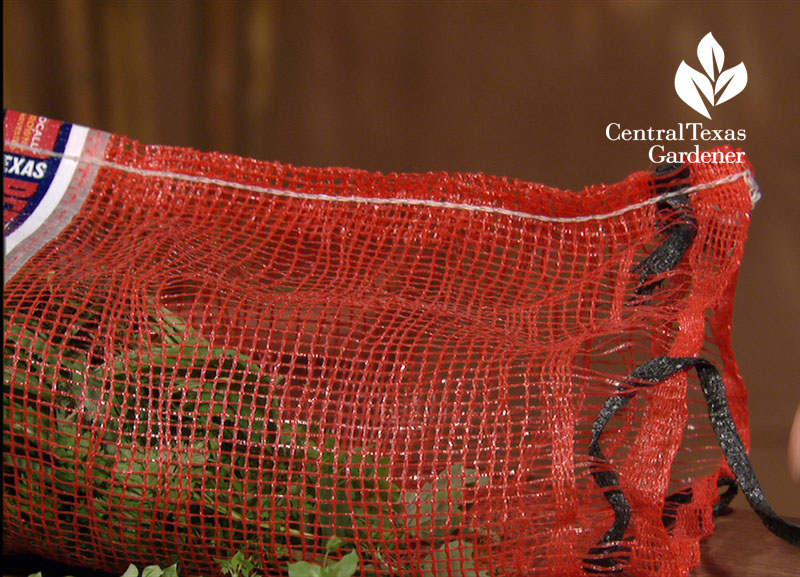 To spice up foliar entertainment in rocky, well-drained soil, what about Daphne’s Pick this week: American or Texas smoke tree (Cotinus obovatus). 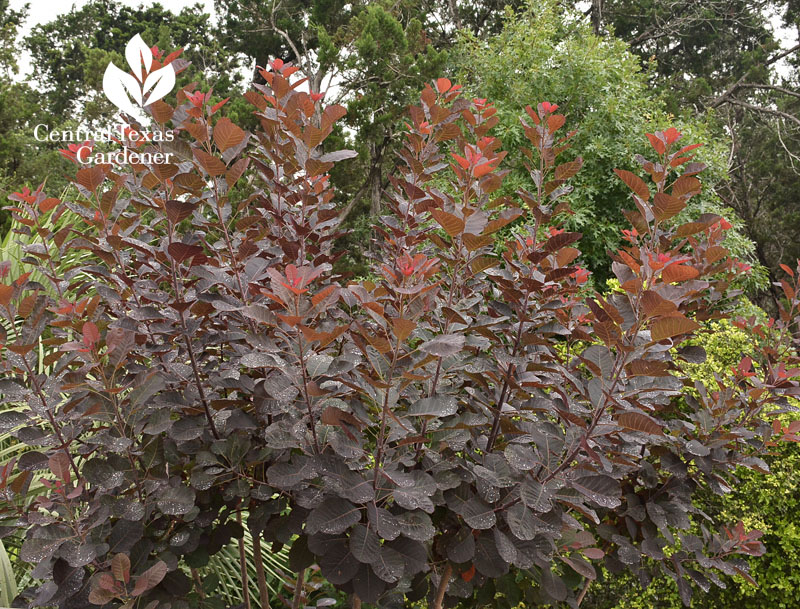 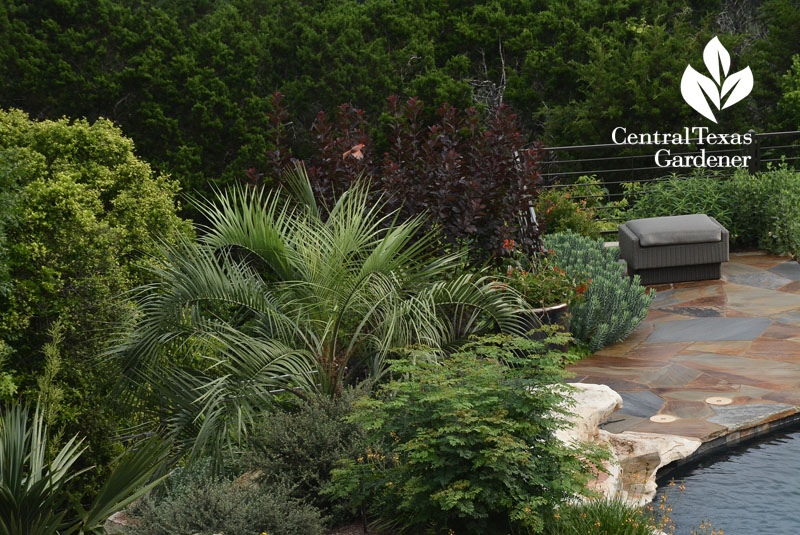 Although it can get to 15-30 feet tall, Kirk wanted to keep it shorter rather than block their outstanding view. 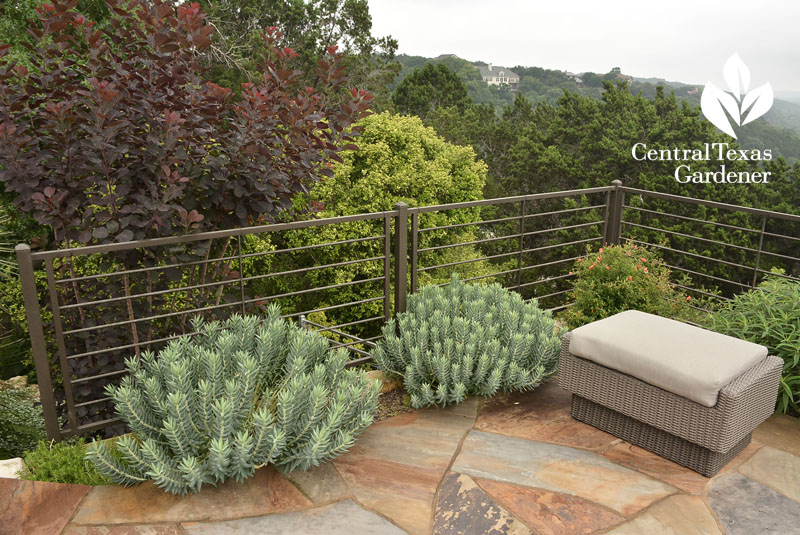 In December, Julie Clark from Stronger Than Dirt cut it back 6’ for a current size of 6’. 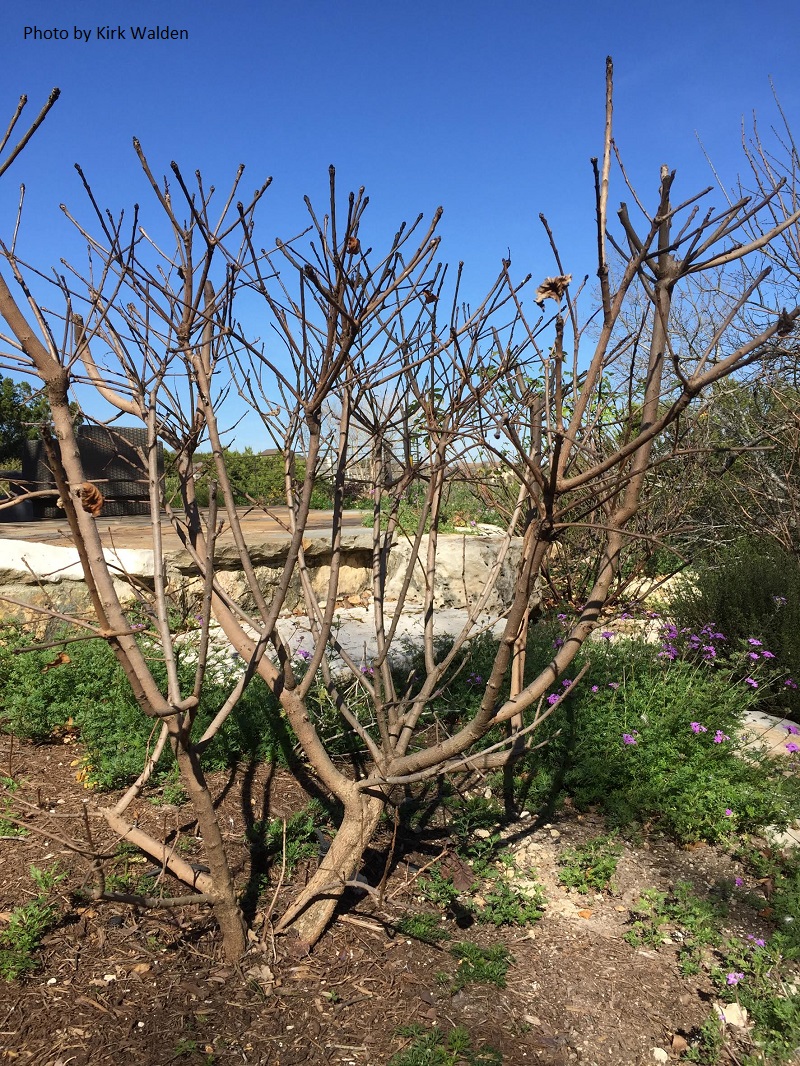 Here’s what she says, “Since it already wanted to be very multi-trunked, we just went with that, rather than trying to make it into a nice specimen tree. So, we cut it back hard enough to allow for room to grow, but also leaving plenty of nodes for new growth. We pruned in December, which paid off, but in general I would recommend that hard pruning be done in February, or early March, depending upon what the winter is like. You wouldn’t want to encourage new growth and run a great risk of it getting zapped. During the season, more limited pruning can be done whenever needed.”

In my east Austin soil, I get my burgundy fix with Billbergia x Rubra bromeliad. Winter annual bee-loved calendulas, perennializing narcissus, and chervil dot this view. 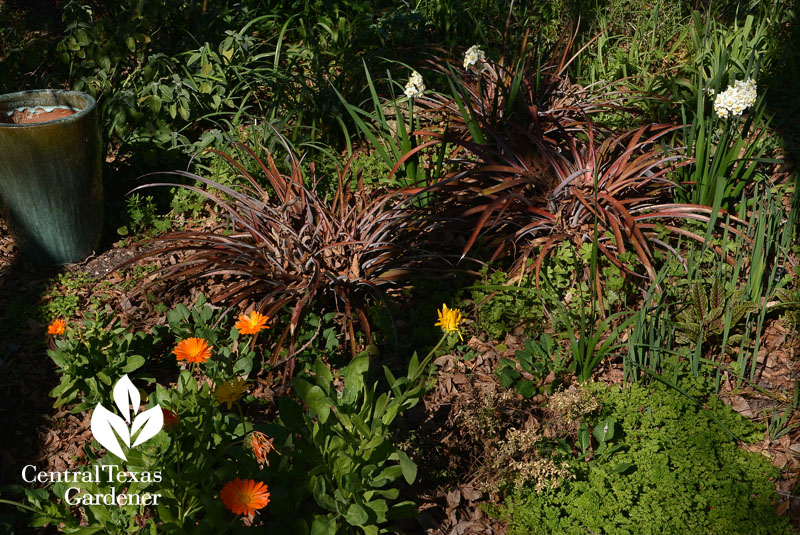 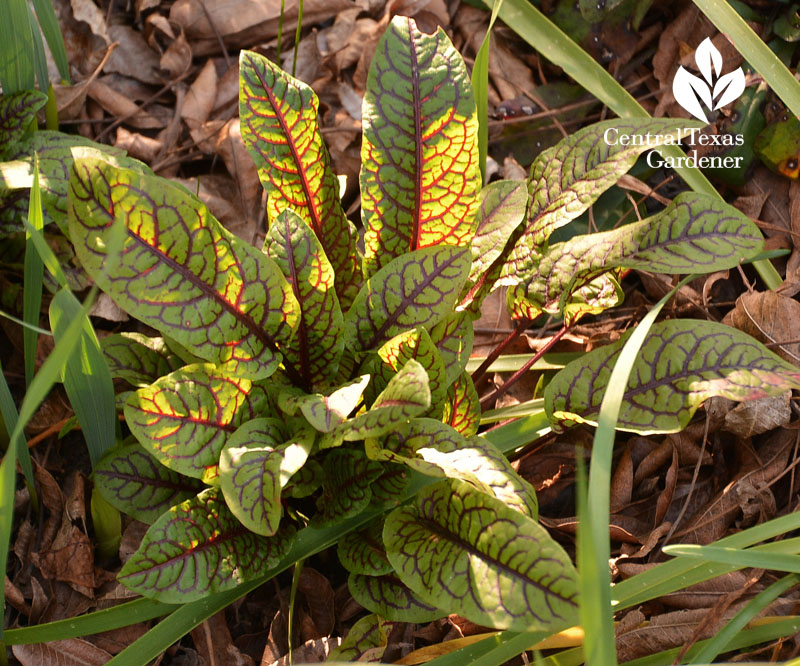 So is Flashy Trout Back lettuce. I’m into burgundy. 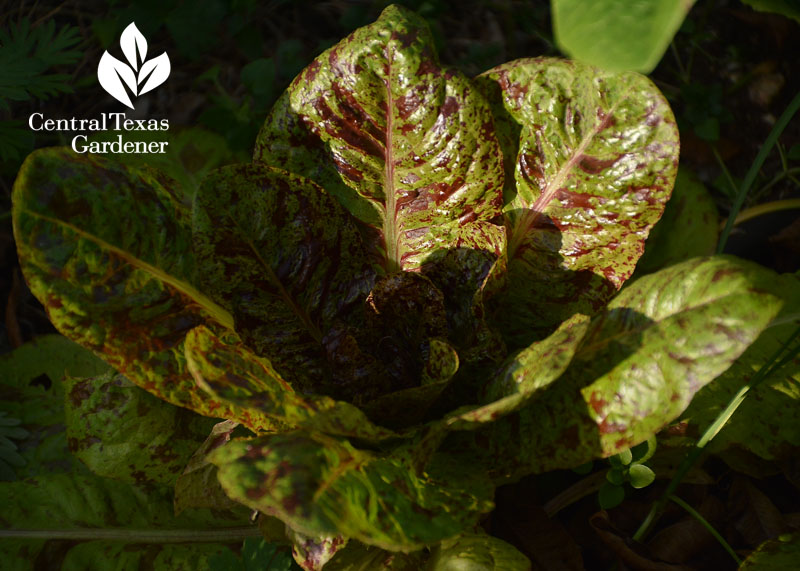 But you know what’s on our minds: summer tomatoes, peppers and other hot weather yums. Randy Thompson from Sunshine Community Gardens joins Tom for his short list of tried and true varieties and tips for success. 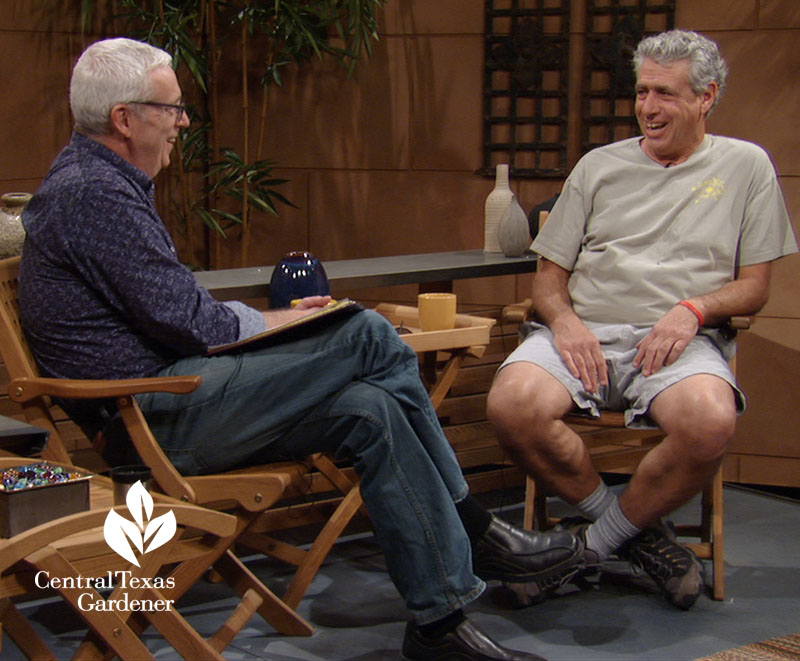 You can get them all, along with herbs and companions at the annual plant sale March 5! 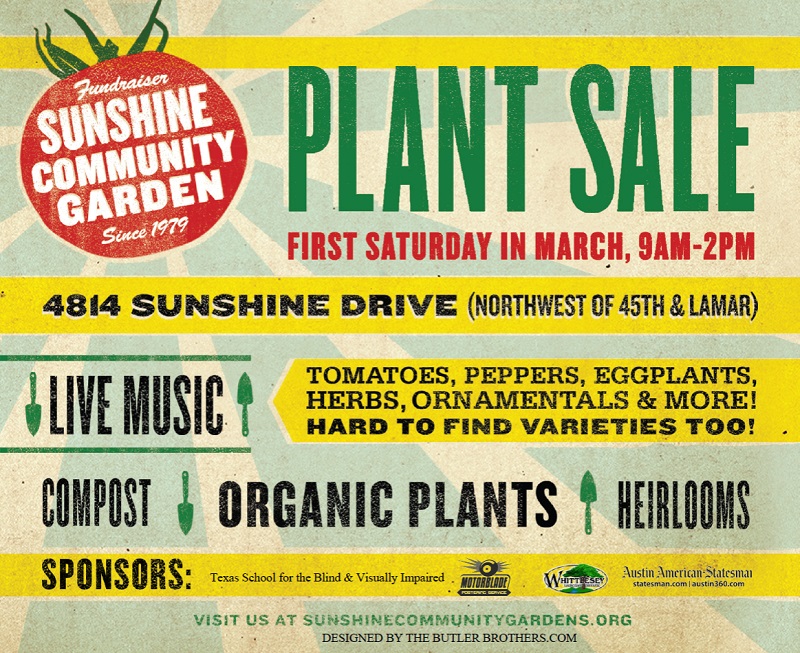 With this crazy weather, be ready for anything. Viewer Picture goes to Bell County Master Gardener Rowena Fengel for her bearded iris blooming Christmas day. 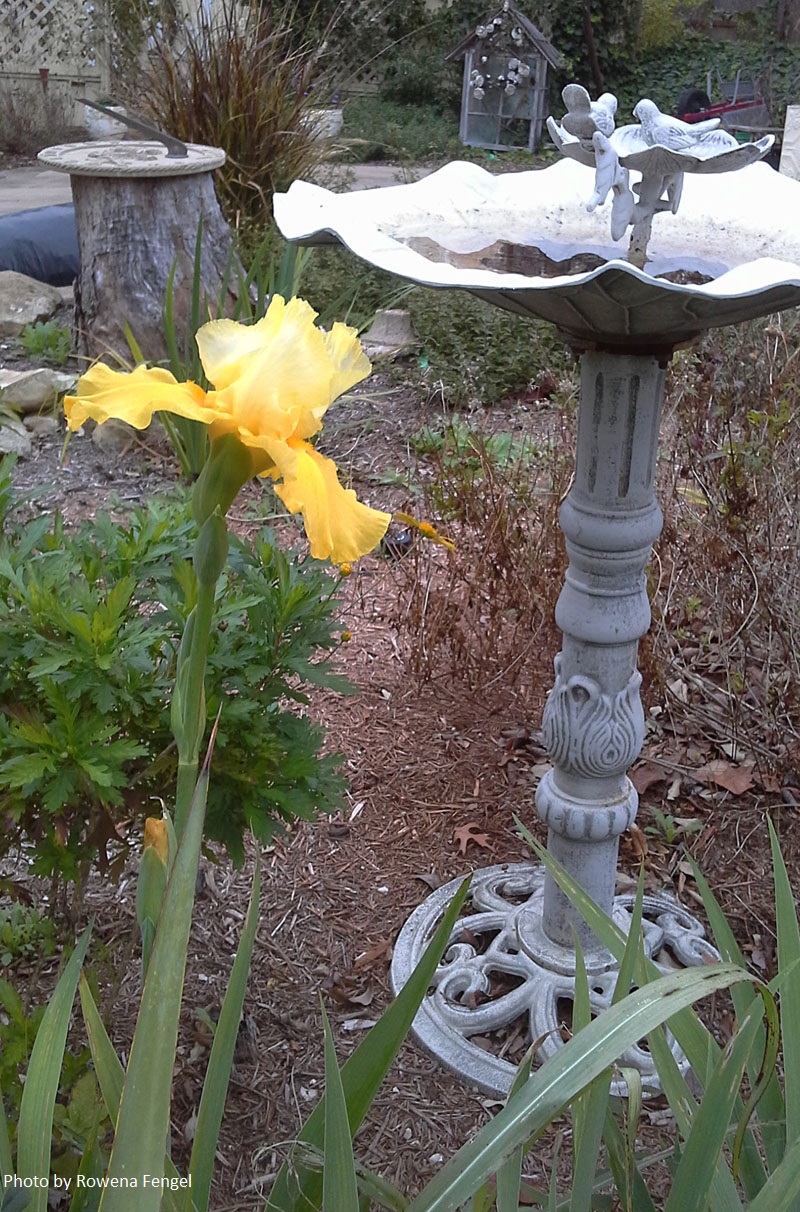 Since events abound, go ahead and mark it now: the Austin Funky Chicken Coop tour on March 26.

A few years ago, we visited Dani and Gary Moss in their artistic, wildlife-abundant garden, complete with Chicksville chicken coop. 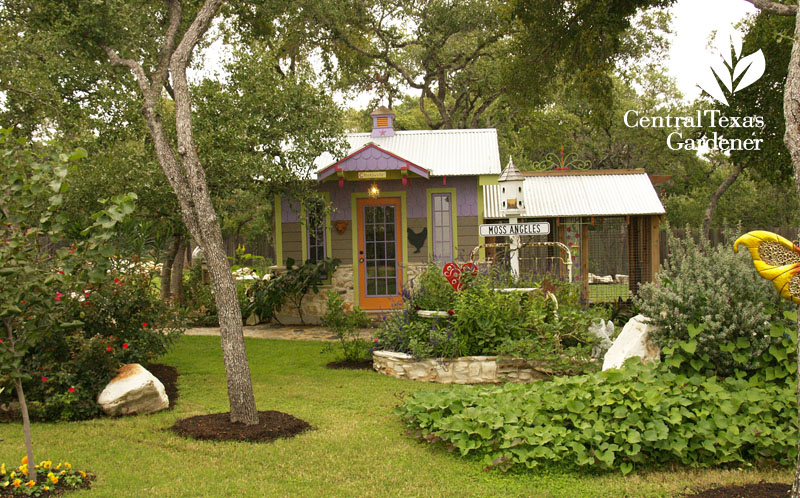 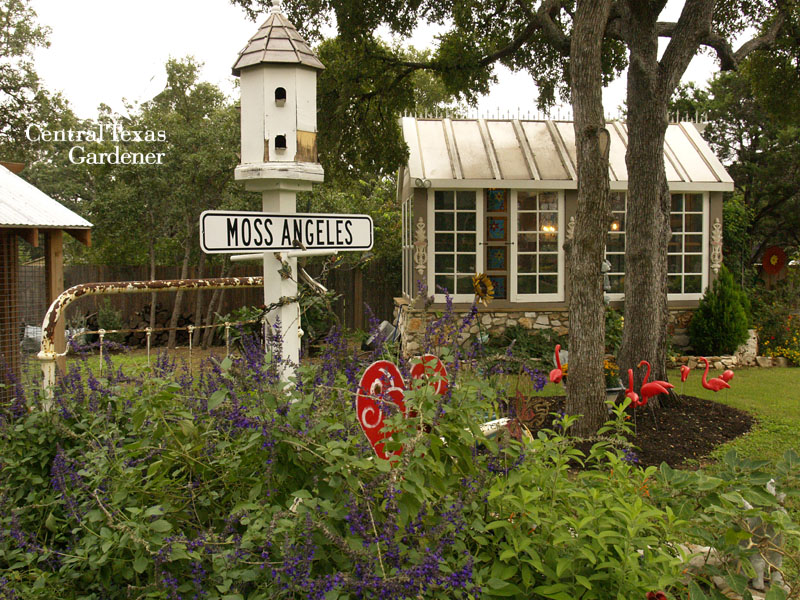 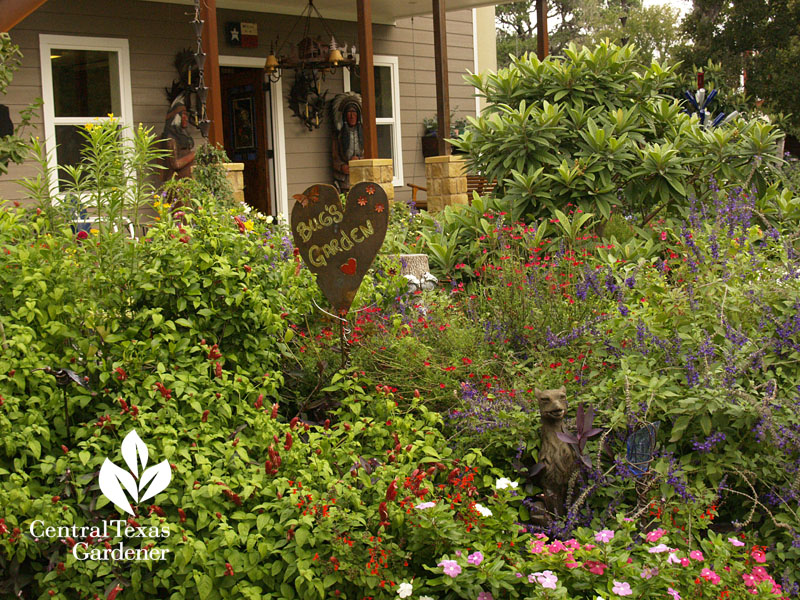 From recycled finds, they built a charming conservatory. The bottom stones came from their rocky property. 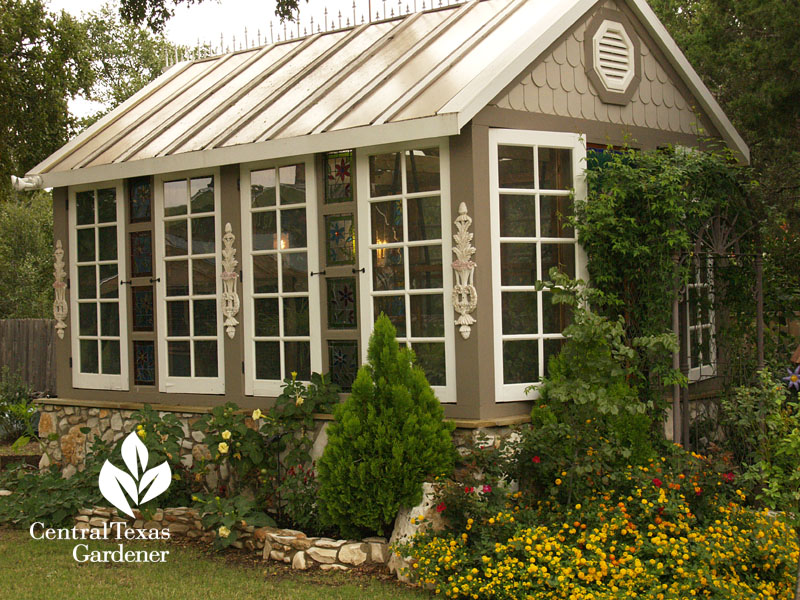 When Dani decided to become a mom to chickens, Gary built Chicksville. 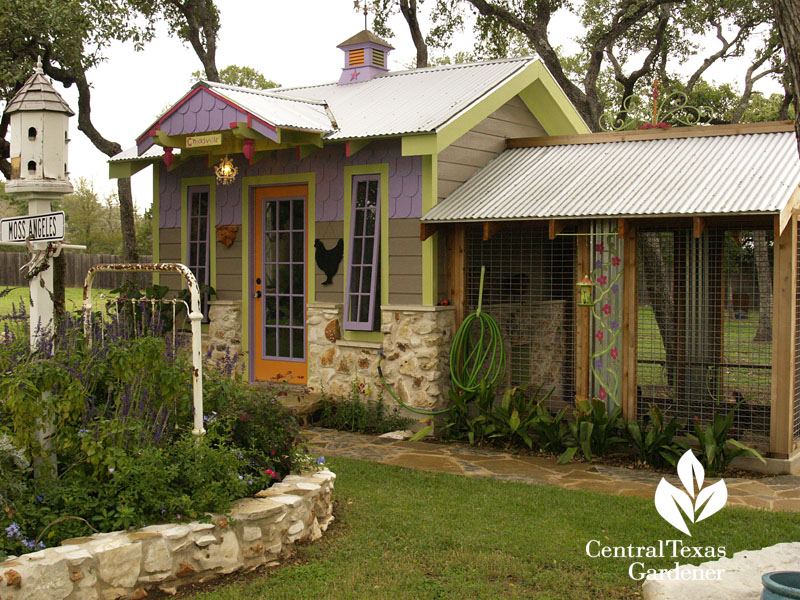 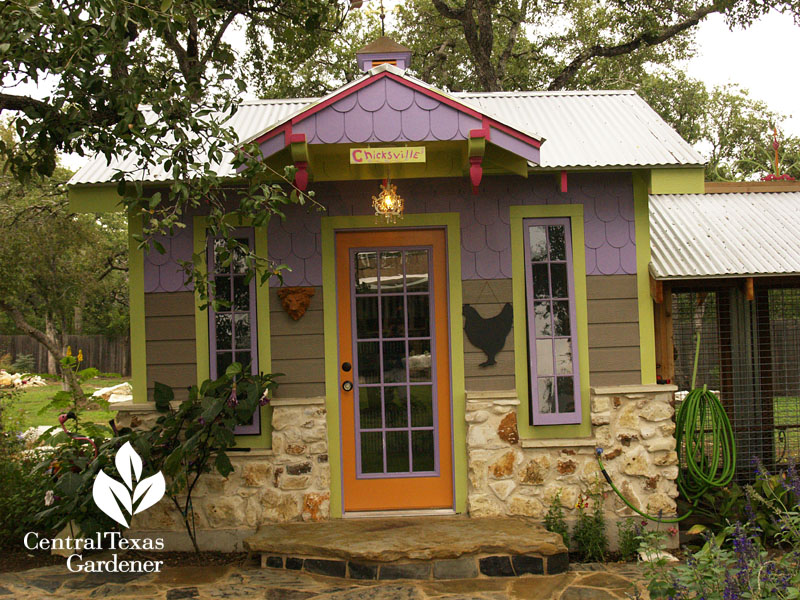