What a year for Texas mountain laurels! It seems like they’ve never looked this good, but maybe it’s because we missed the grand show last year after February 2021’s deep freeze. 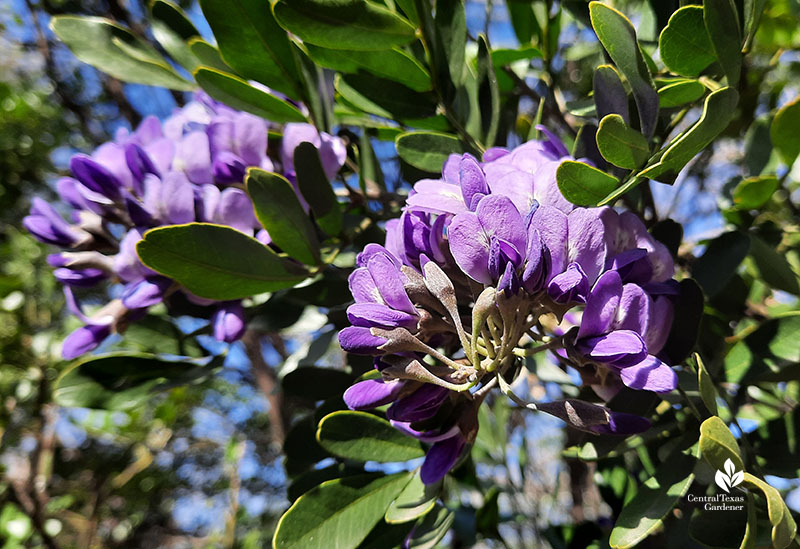 There’s such a community buzz about them every spring that I’m convinced that those eye popping velvety purple clusters make it the first tree for new Texas gardeners, especially in small space yards. 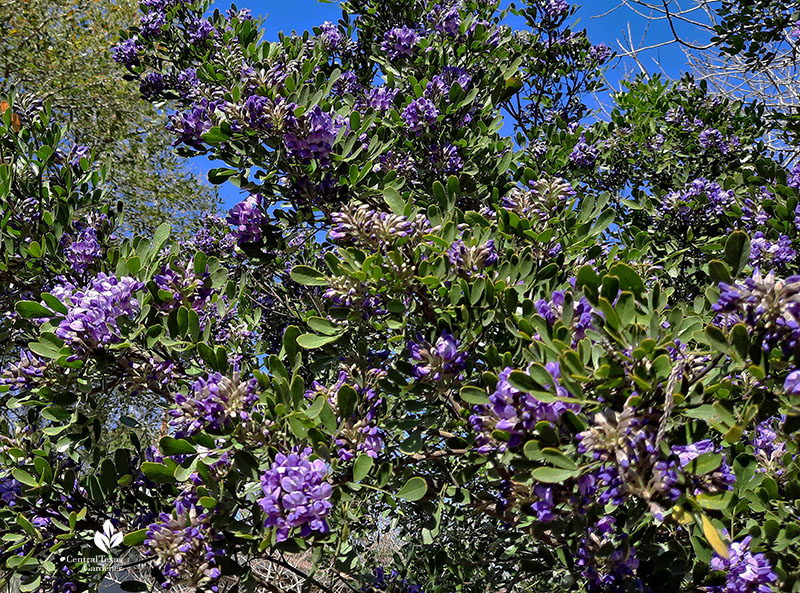 Scented like grape bubblegum (or Kool-Aid), they carry on the spring flower food parade to appreciative crowds of bees, butterflies, and beneficial wasps. 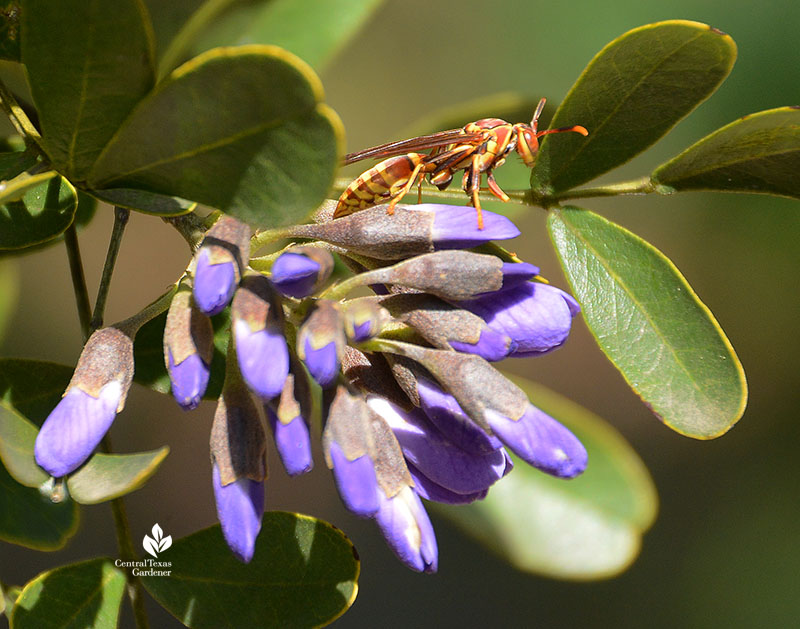 The rest of the year, these evergreen, sun-loving small trees make excellent screens and accents. 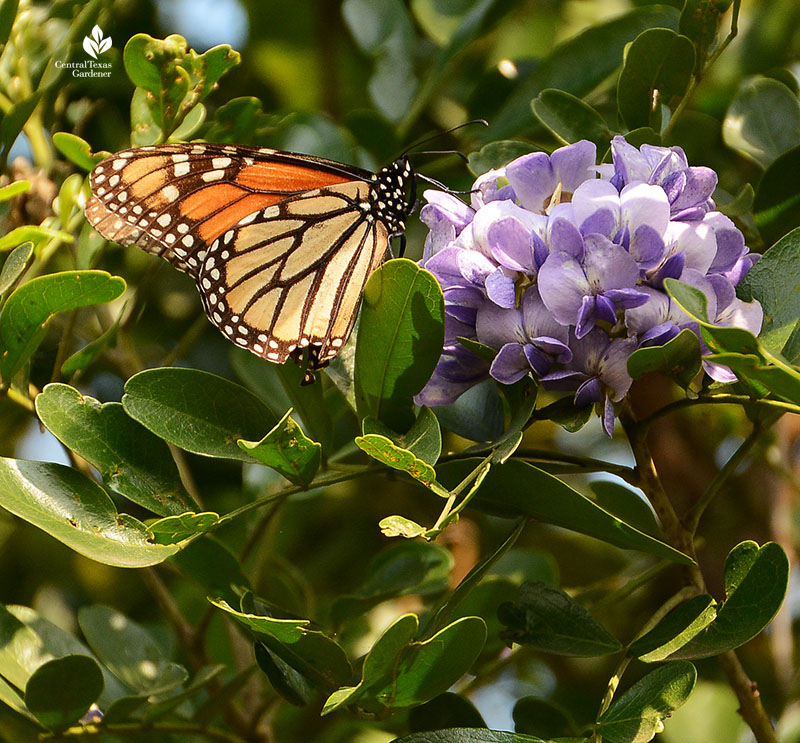 In a lucky complementary color powerhouse, clusters of cute lesser goldfinches chatter on its
thistle seed feeder. They dash away when the paparazzo shows up, but this bright-breasted male hung tight long enough for one shot. 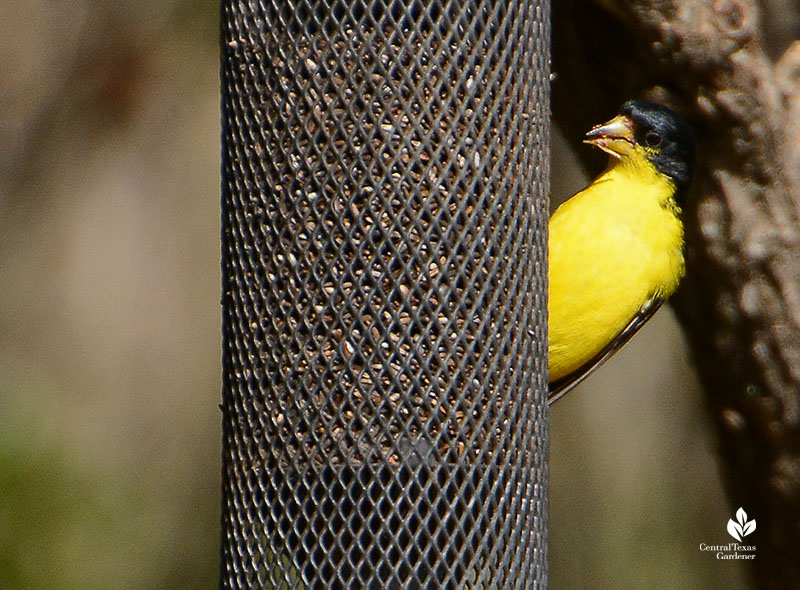 Native golden groundsel’s poised to greet crowds of bees and other tiny pollinators, including skippers, and most likely the wasps. 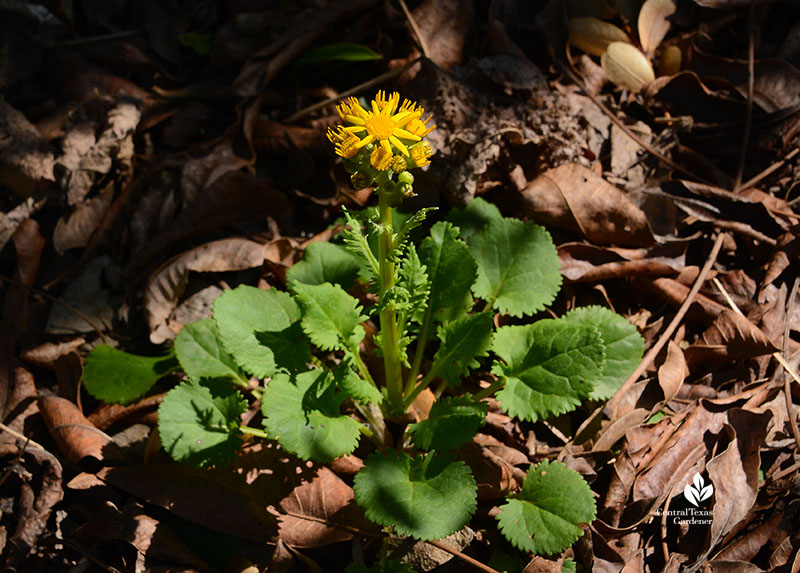 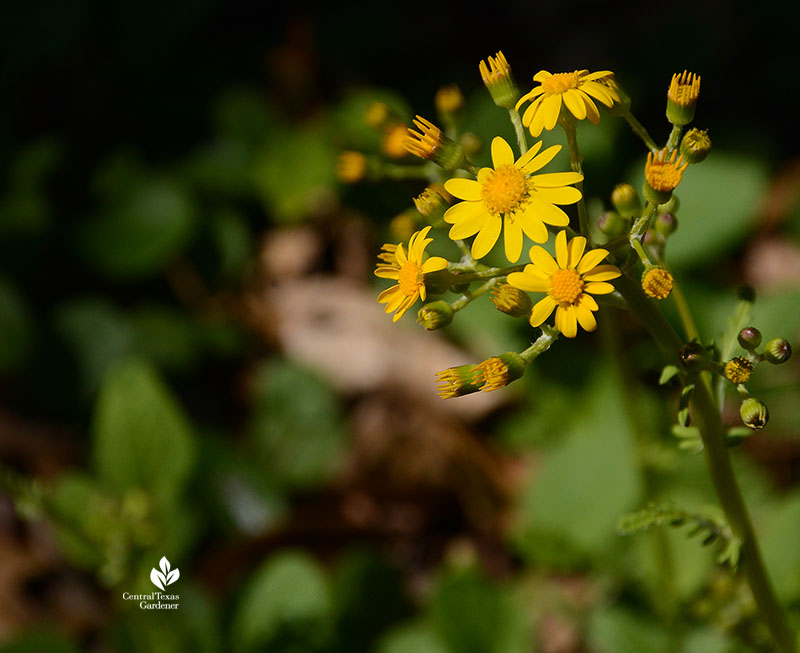 Last fall I seeded Drummond’s phlox—a native spring annual—envisioning a wide border of bee-laden red flowers. Promptly, industrious squirrels dug up most of them. No critter’s going to dig up tenacious native evening primrose and that’s fine with me! 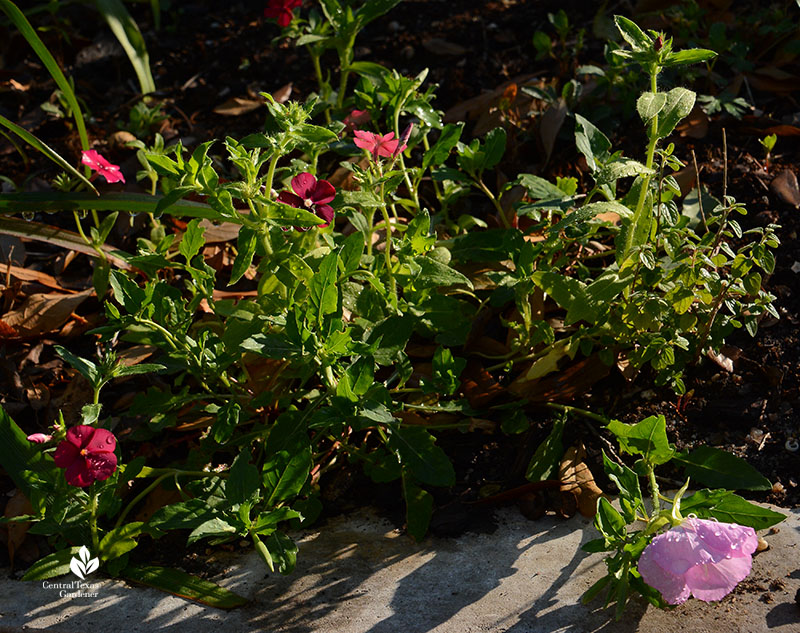 It’s not exactly what I planned, but the bees will take it. As we know, gardeners would be rich, rich, rich if we got a penny every time we vowed, “There’s always next year!” (Adjust for inflation.)

Iris albicans popped the first of its many “grandma’s flag” flowers this week. In my garden, it’s already a reliable champ since Stronger Than Dirt’s Julie Clark passed a few along three years ago. 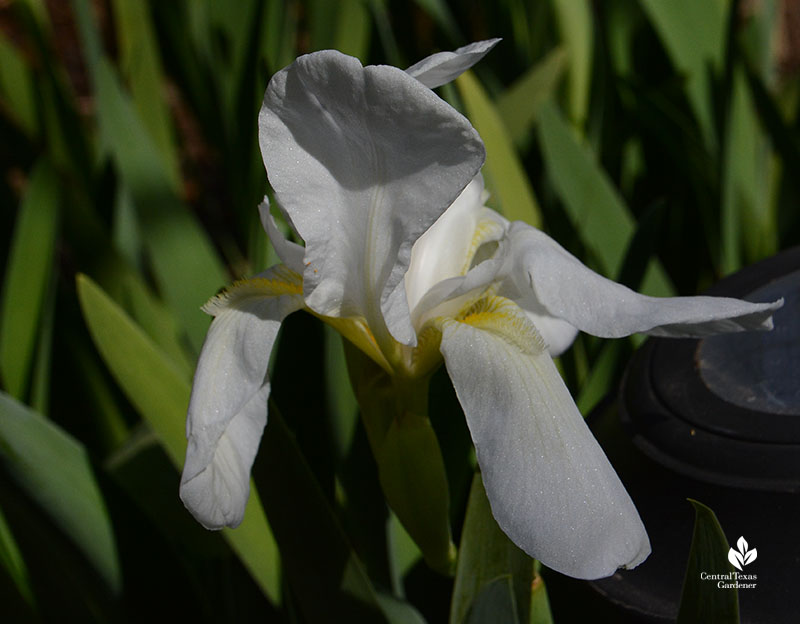 Also called the cemetery iris, it was first used in North Africa as a decoration on gravesites, according to Cynthia W. Mueller in her intriguing Texas A&M AgriLife story. She wrote, “It’s a species cross that is unable to make seeds on its own, but spreads by being passed from hand to hand. You will often see it blooming where once a house stood, and it’s able to survive unaided in pastures along the roadside, often half-buried in tall grasses and other wild flowers.”

Although early bulbs have faded, their strappy foliage adds textural dimension for a few more months. Pillowy Narcissus ‘Erlicheer’ assures that it will be back again next year. 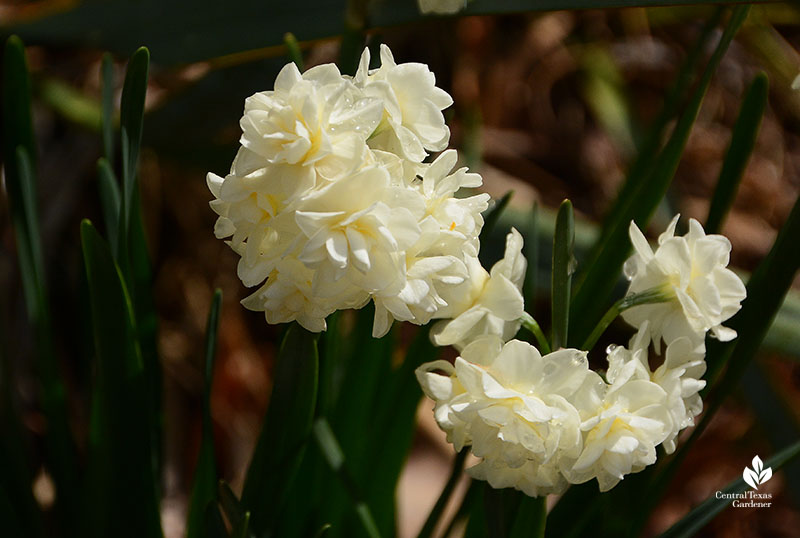 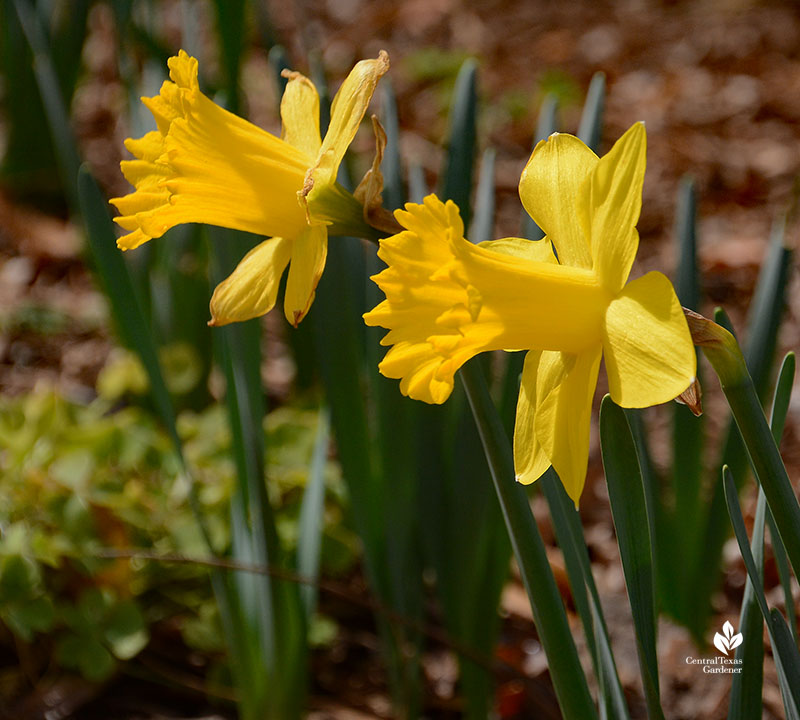 Unsettled weather this time of year confuses cold-tender plants when we haul them outside, then back in, then back out, then back in. Viewer Tommie McFalls and husband Ray are worried about their lemon tree that dropped a lot of leaves on its latest move. 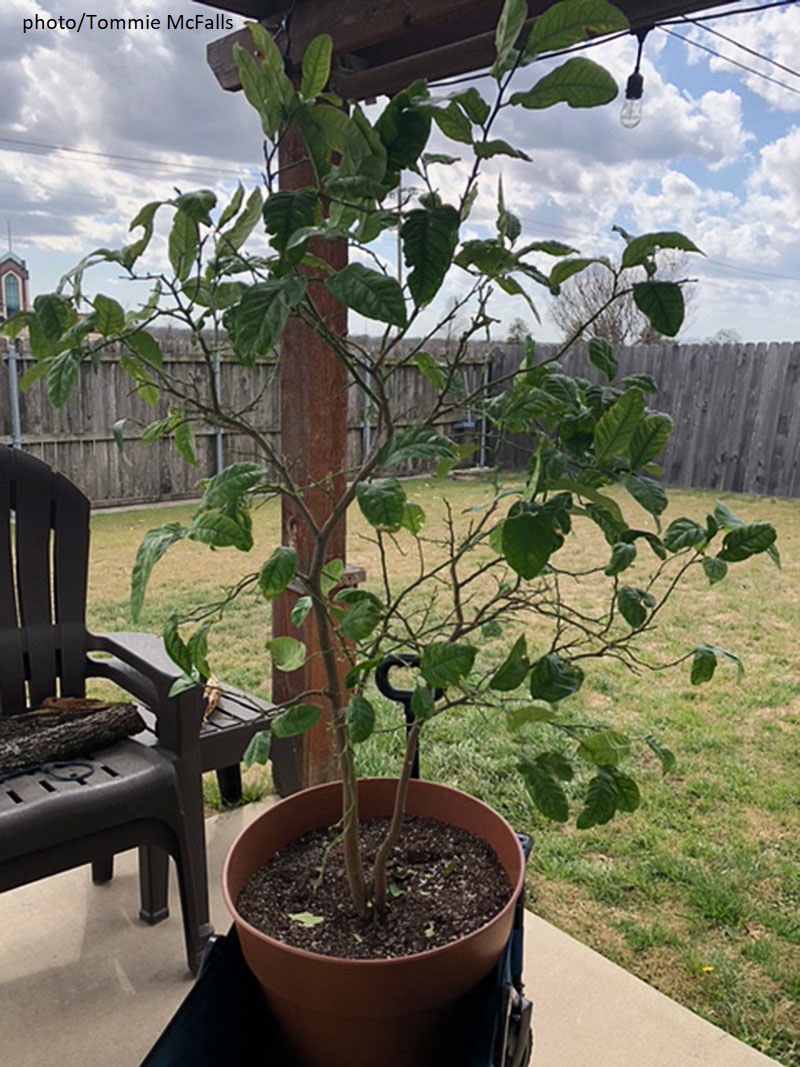 They raised “Leo the lemon tree” from a seed that sprouted when a guest dumped the rest of her iced tea—including the lemon slice—into a plant pot. They know it’s unlikely to ever produce lemons, but it’s a pretty plant. And, a fun surprise touches us more deeply than planned expectations.

So, I headed to Daphne Richards, Travis County Extension horticulturist. She told us, “Many, if not most, container citrus are looking pretty terrible at the moment, due to the stress of being moved back and forth indoors during the winter season. Dropping leaves is really normal in this situation. It’s not due to the cold, but to the lack of light during the time that this very high light plant spends indoors. Leaves are resource intensive, and if they aren’t doing anything for the plant (there’s not enough sun indoors, not even in the brightest of windows, so the leaves can’t properly photosynthesize), the plant will drop them and hunker down for better times.” 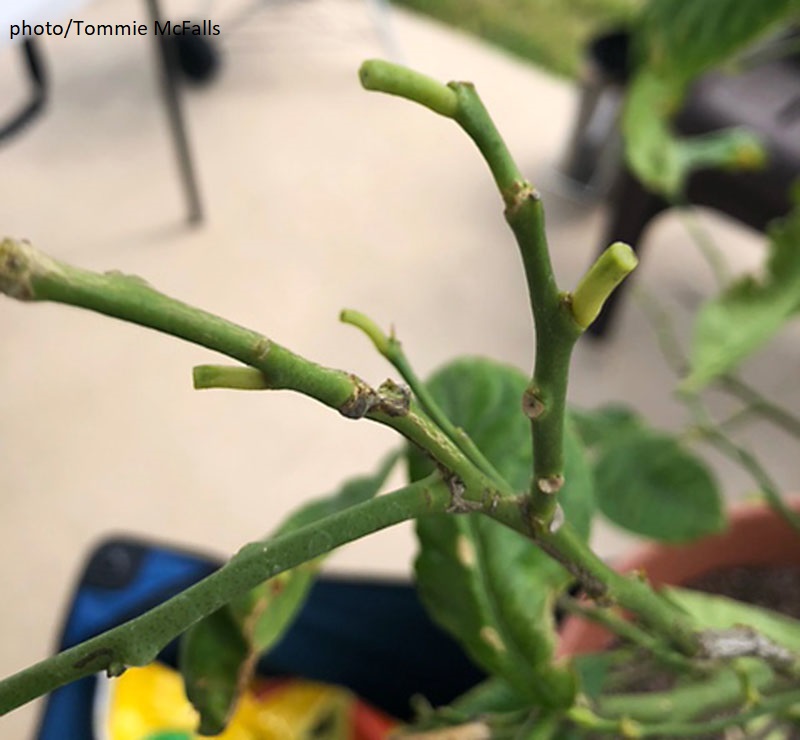 Daphne recommends pruning—including the main trunks—back at least 25% or to a spot where it’s obvious that new growth is already emerging. Prune just above a leaf node where the new growth will emerge, and prune out any super small branches entirely, because the growth coming from them will never be any larger than the originating limb.

Thanks for stopping by! Next week, we visit a casually formal shade garden, so see you then.