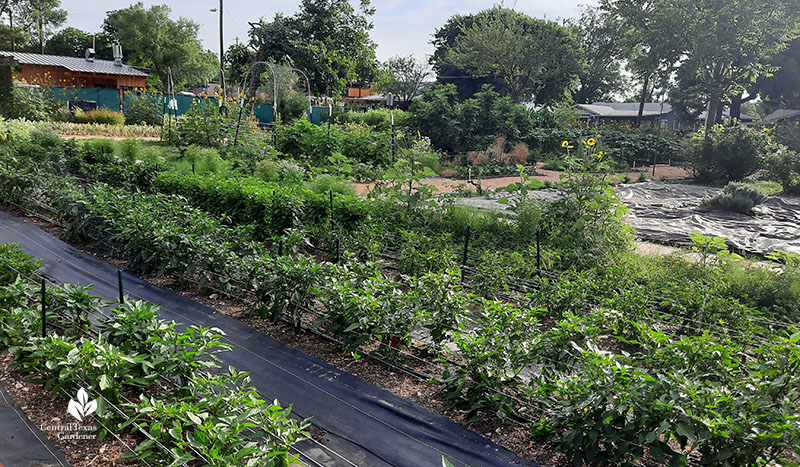 In this East Austin neighborhood, Lea and Anamaria carry on the farm to table mission begun when Dorsey Barger cultivated the concept at Eastside Café. And like Dorsey, they love to teach others how to grow their own food. 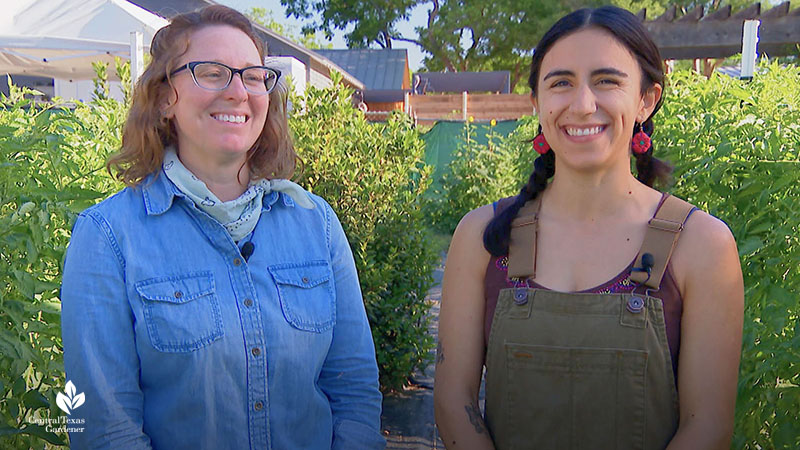 So, on CTG’s late May visit, we asked them for pro tips to grow tomatoes, peppers, and okra. In January, they started their tomato and pepper seeds in pots to transplant in April. 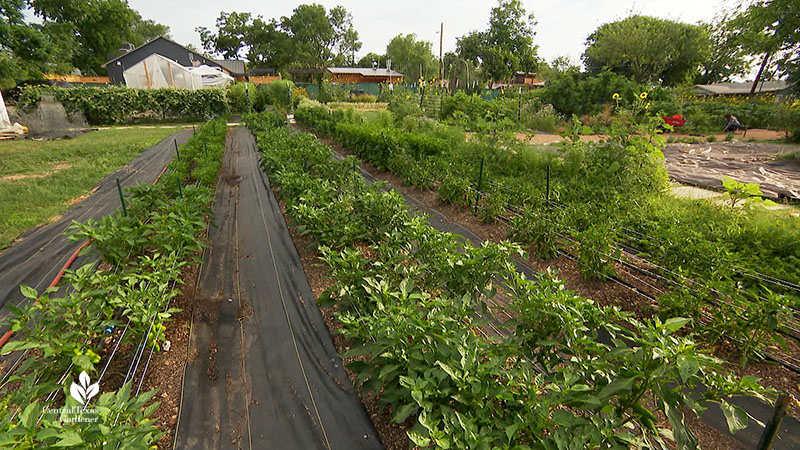 When plants were young, they removed flowers and fruit to focus energy on establishing deep roots and healthy stems. As their tomatoes grew, they removed bottom leaves to reduce infection by soil-borne diseases like Septoria and Alternaria. 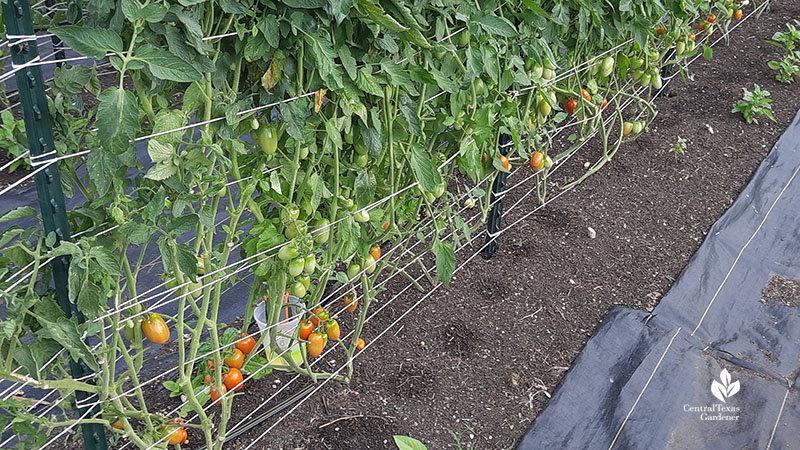 Between each cut, they disinfect their pruners by dipping them into a sanitizer or bleach solution. Mix 10 parts water to one part sanitizer OR bleach. 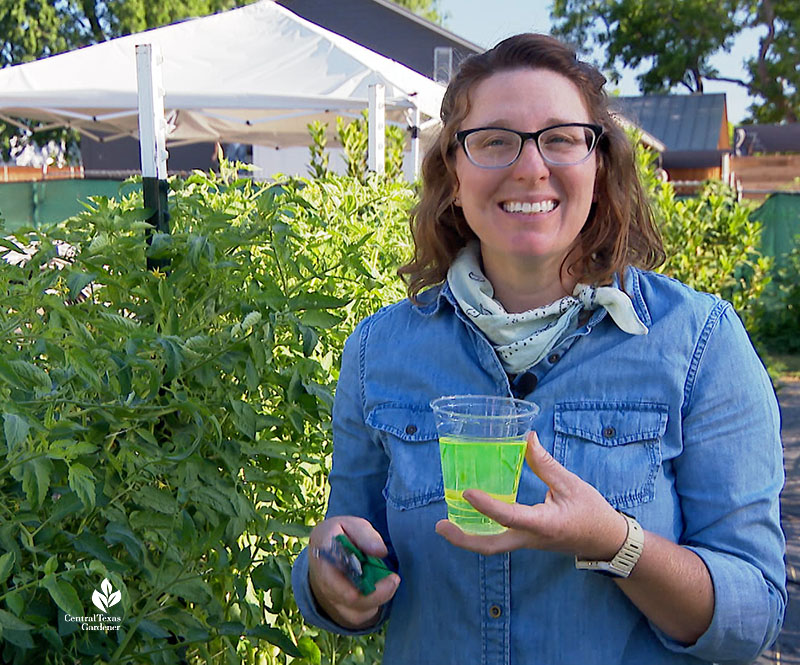 Now, they’re removing some stems for health and productivity. 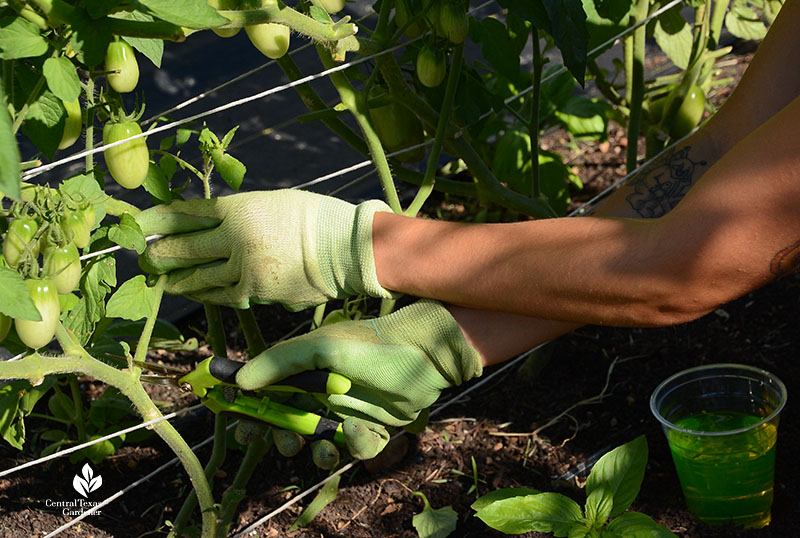 Trellising is important for health, too, especially with indeterminate varieties like Juliet that produce until heat stops flower production. 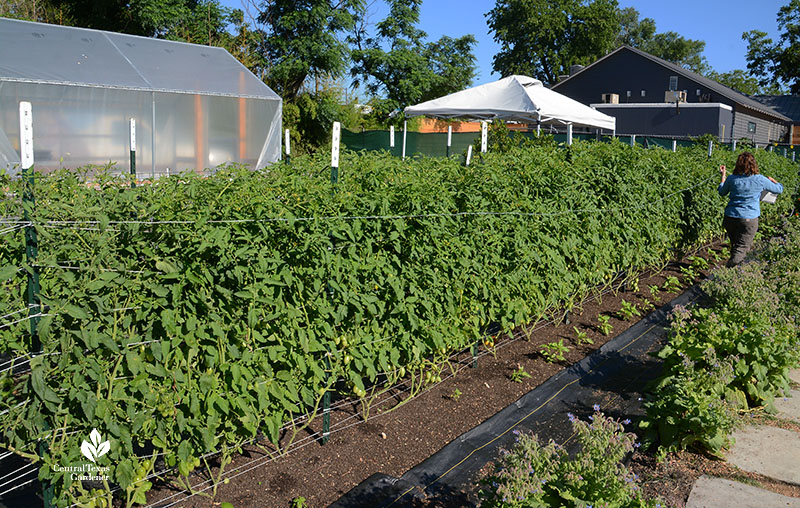 First, they set up metal T-Posts every three plants to anchor twine. 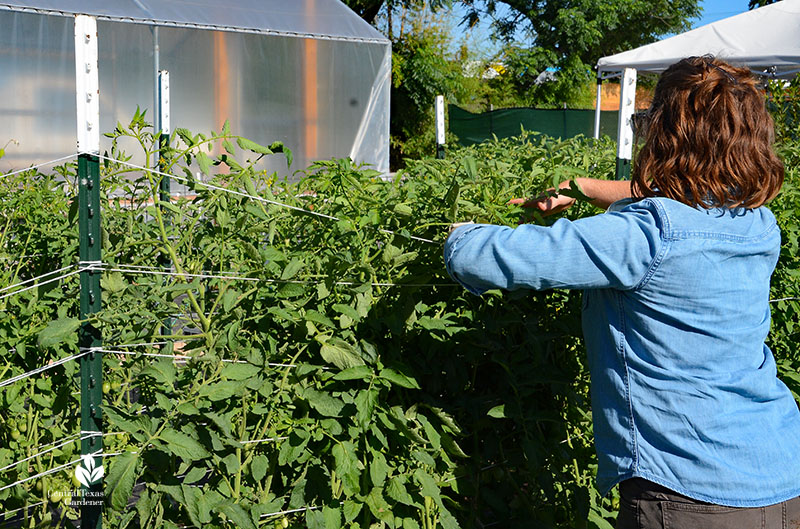 Lea demonstrates how they weave twine through the tomatoes to stabilize plants as fruit production weighs them down. You’ll hear this called “Florida Weave.” 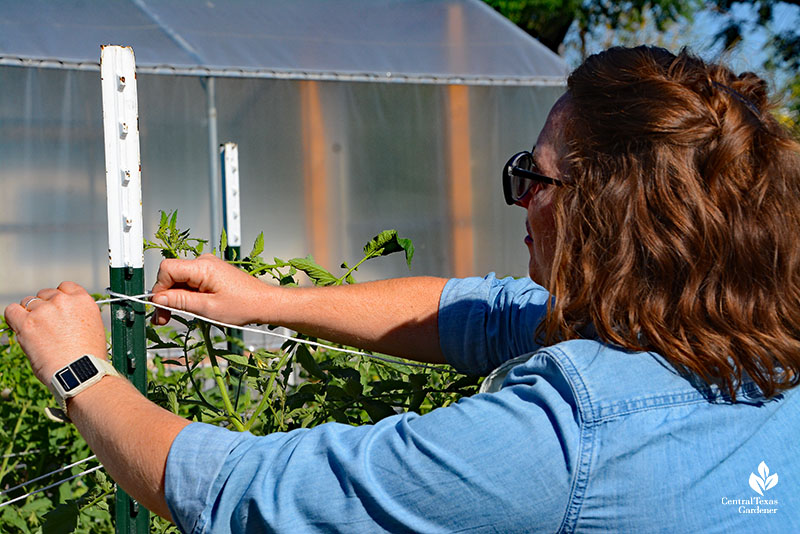 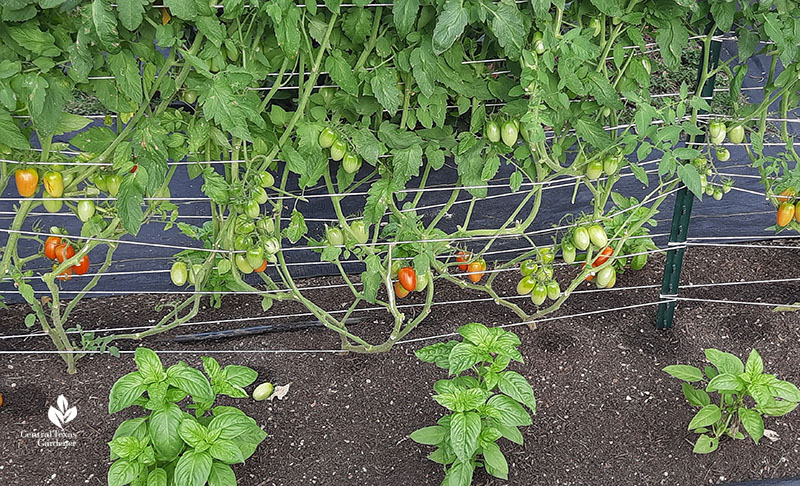 They also seeded borage and nasturtium in February to harvest their edible flowers. Nasturtium’s seriously on the way out with the heat (and probably pulled up by now), but they used it and borage as a trap crop for early insects, including harlequin bugs to distract them from the tomatoes. 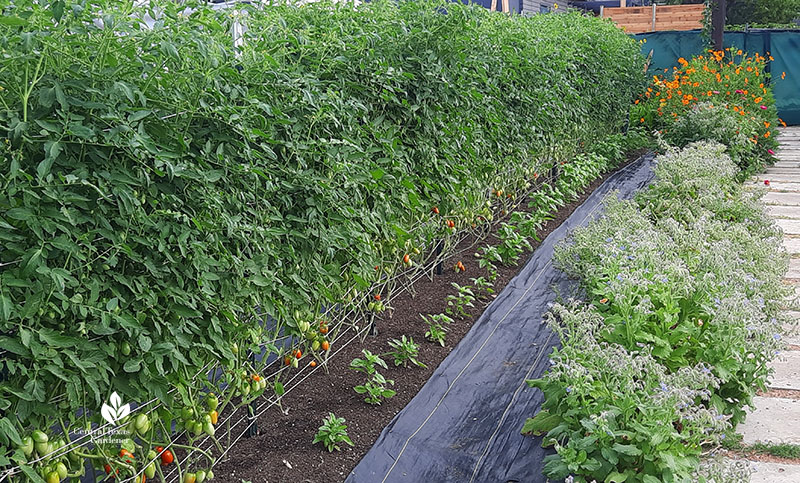 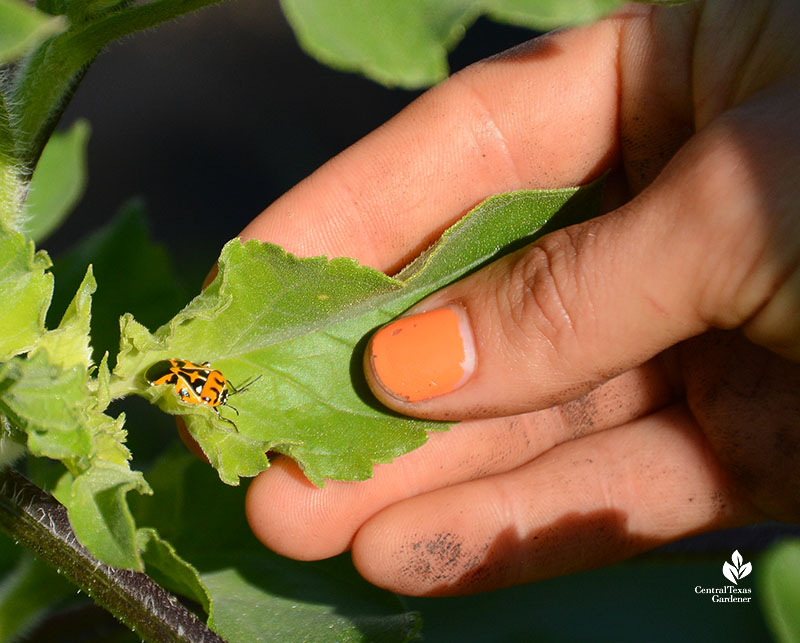 Like borage, cosmos and zinnias attract butterflies and bees to pollinate the squash. Cosmos and zinnias are warm weather annuals that keep on going all summer and may re-seed to start new generations before frost. 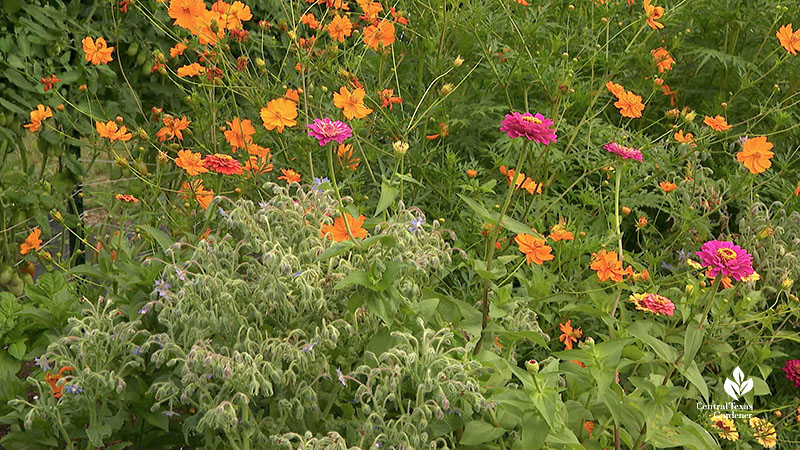 Tomato plants are generally a worn-out mess and insect hotel by July. So, in July 2021, they tried an experiment to clone them with cuttings. On our visit last fall to watch them sow cool weather crops like cilantro and carrots, Lea demonstrated where they’d cut their Juliet tomato stems in July to pot up and transplant for another bountiful crop. I saved the footage until now as we head into July heat (weeks early, it seems!).

They trellis peppers, too. Recent winds snapped a few young stems. Since peppers continue producing late into fall, they want to support them as they grow up. 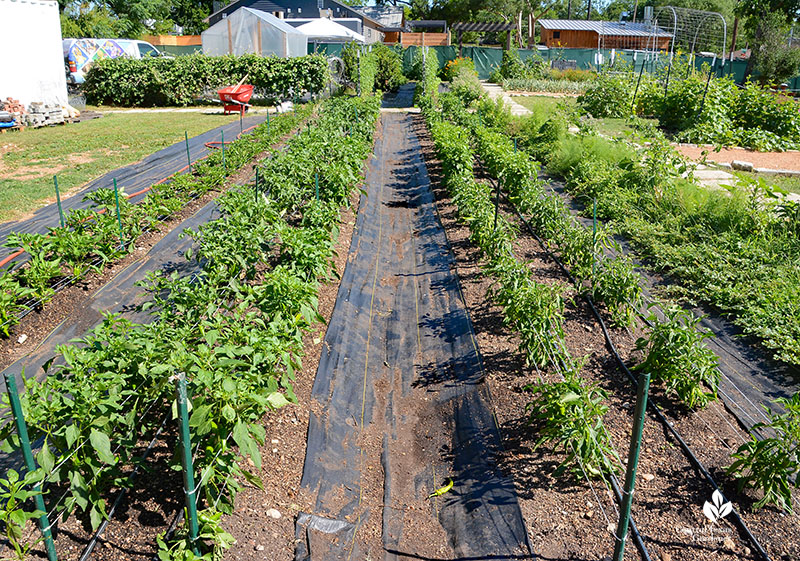 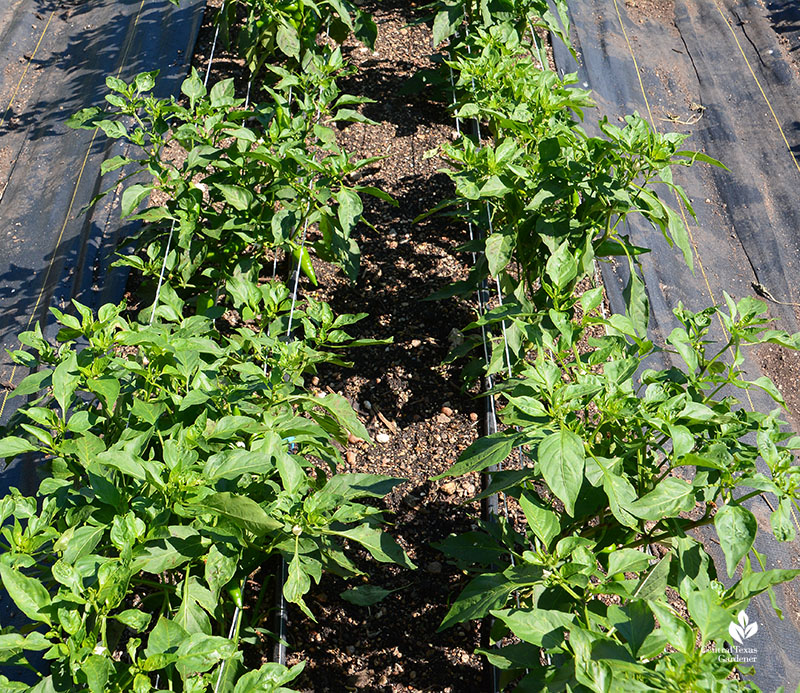 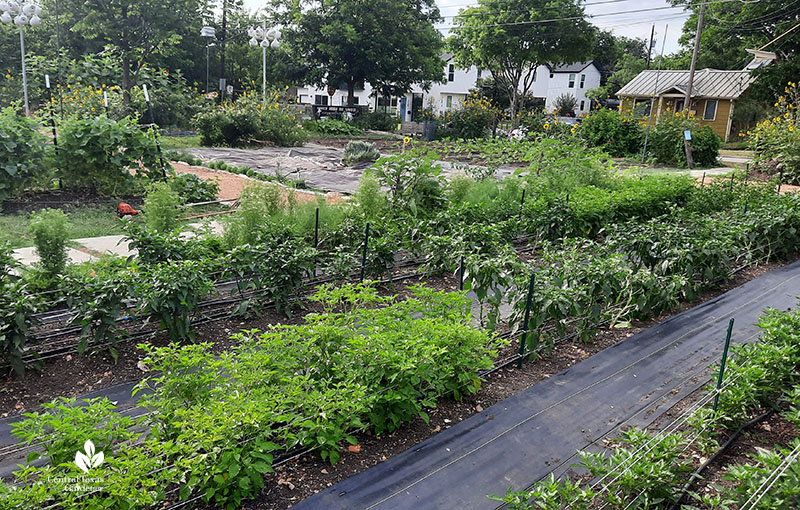 Sugar Rush Peach turns the color of its peachy name and sweetens the heat as it ripens. 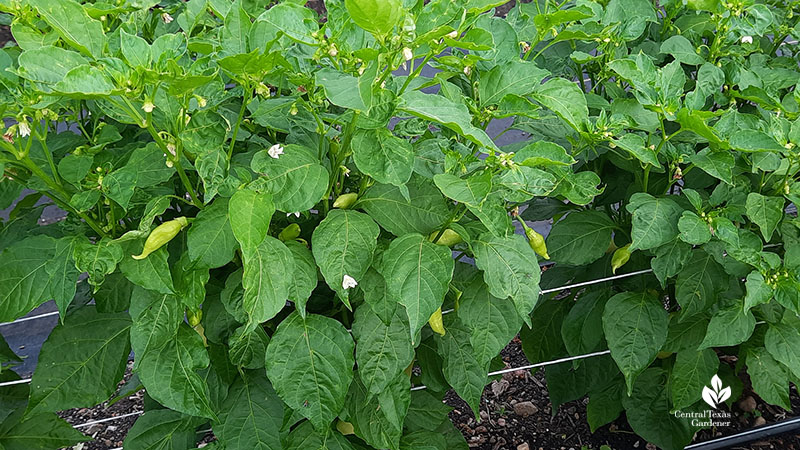 They’ve included Jimmy Nardello peppers, too, a variety that made me a fan last summer when we visited Boggy Creek Farm with Yolanda Nagy of Eatin’ and Sippin’ Locally. 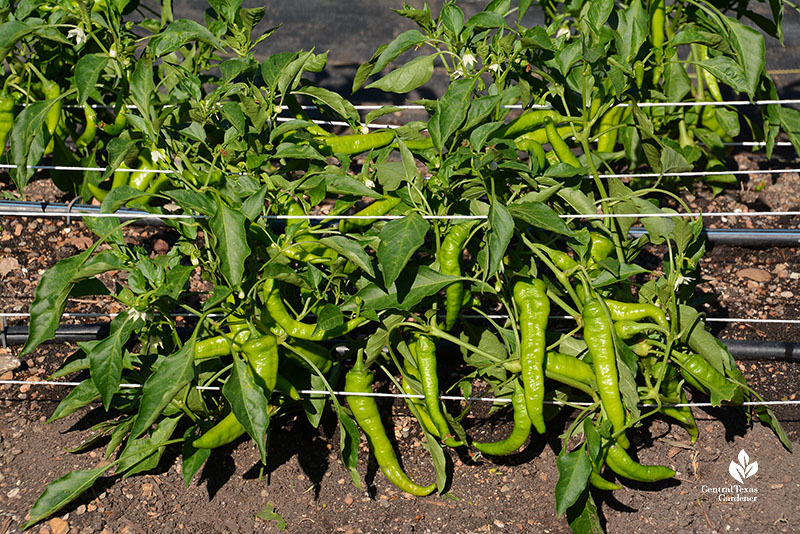 Anamaria and Lea also explain their fertilizer mixture, and what they’ll do differently next time. 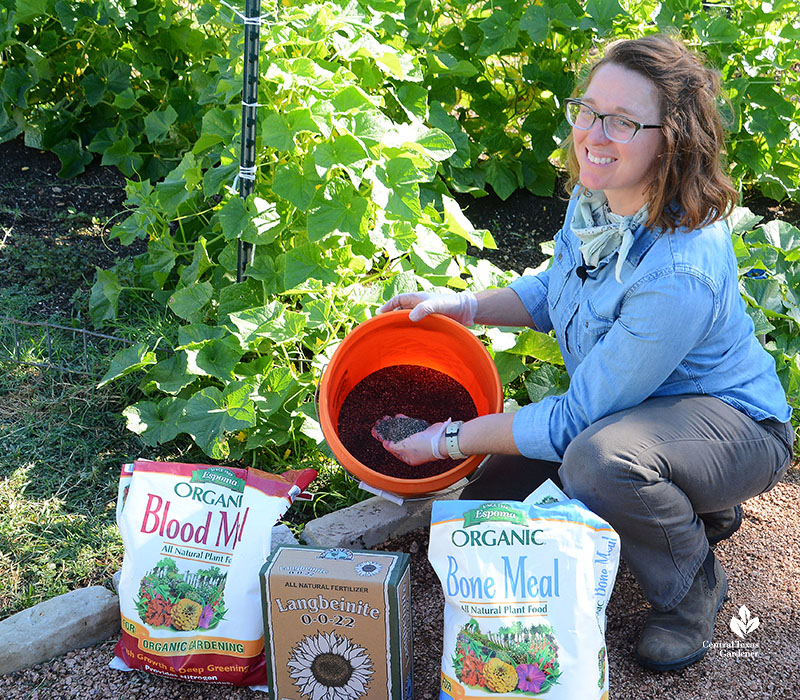 Since okra keeps producing until frost, they plant seeds after spring’s last frost date and even into late May and early June for successive harvests. 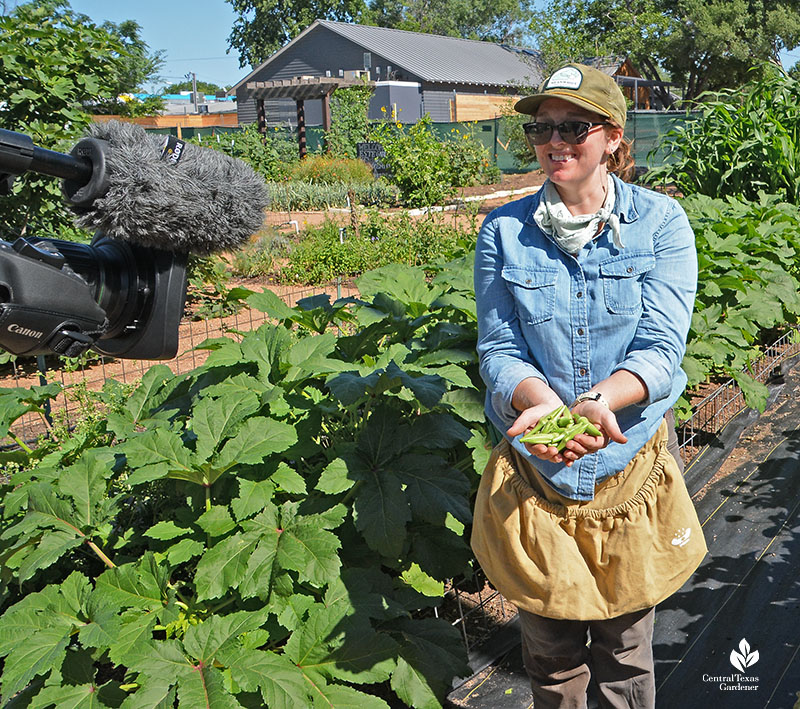 As they sow this bed, they’ll plant pole bean seeds to trellis themselves onto the okra. Legumes like beans and bluebonnets fix nitrogen in the soil for heavy feeders like okra. 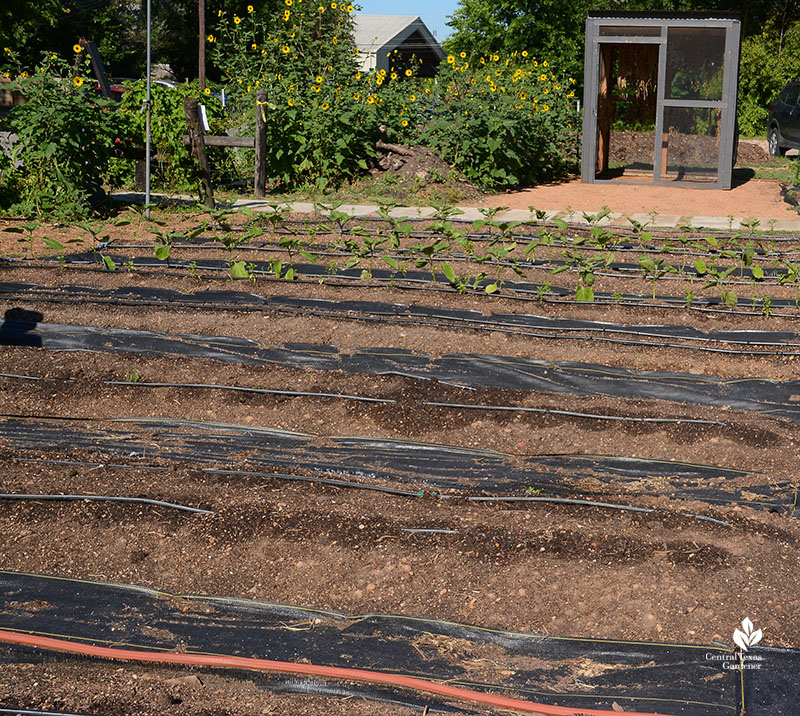 Since okra’s so prolific, why not eat a few of those yummy flowers? So very refreshing on a hot day! 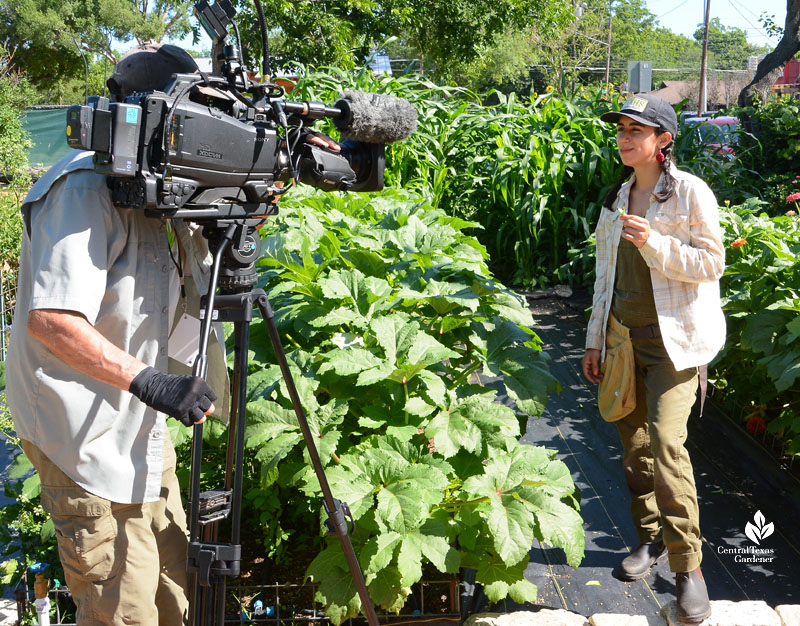 With a staff of two, Anamaria and Lea absolutely value community volunteers who helped bring this garden back to life. In exchange for a few hours of work (in early morning!), volunteers reap priceless knowledge and take home food fresh from the picking. 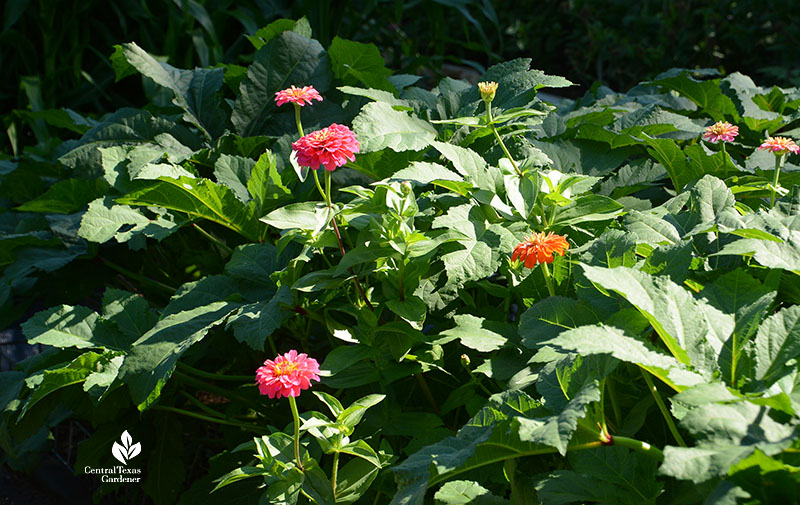 Follow them on Instagram for updates and stop by any time to eavesdrop on chattering purple martins. They’ve got lots of good stories to tell you.

Watch now for all their tips and techniques!