It’s been a mighty sweet week as we’ve begun harvesting our satsuma mandarins. My ‘Miho’ is still small but mighty with three absolutely delicious fruits. You really can’t beat the taste of fresh-picked fruit! In Texas A&M testing, this variety tolerated 14°, though young plants should be protected and containers moved to warmth. 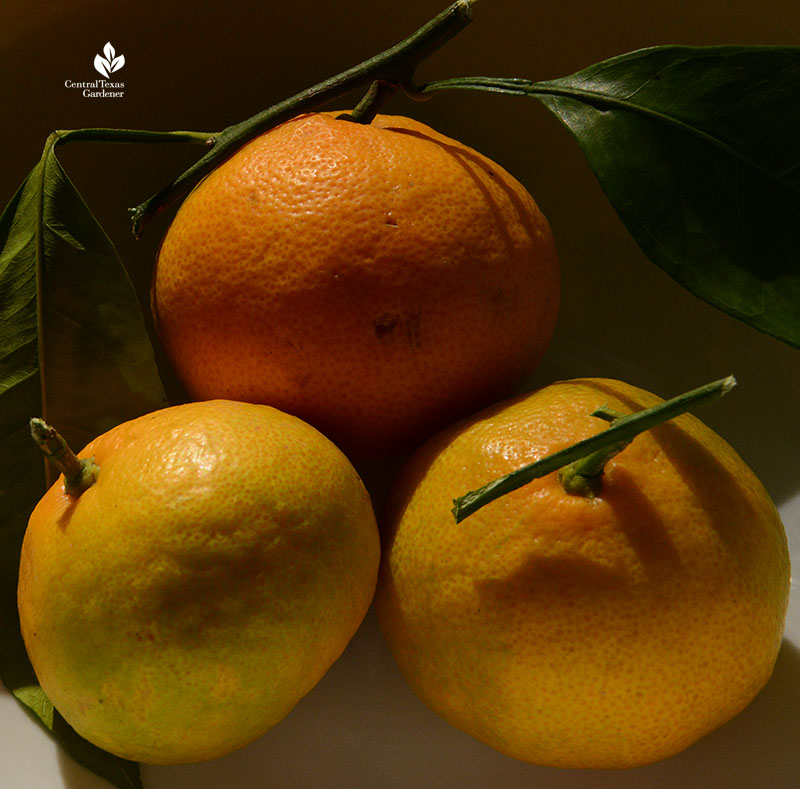 A type of orange, mandarins include tangerines, satsumas, and the ‘Clementine’ variety that you find in stores as Cuties, Sweeties, and Halos. Satsuma mandarins are just as sweet as ‘Clementine’ and much easier to peel. 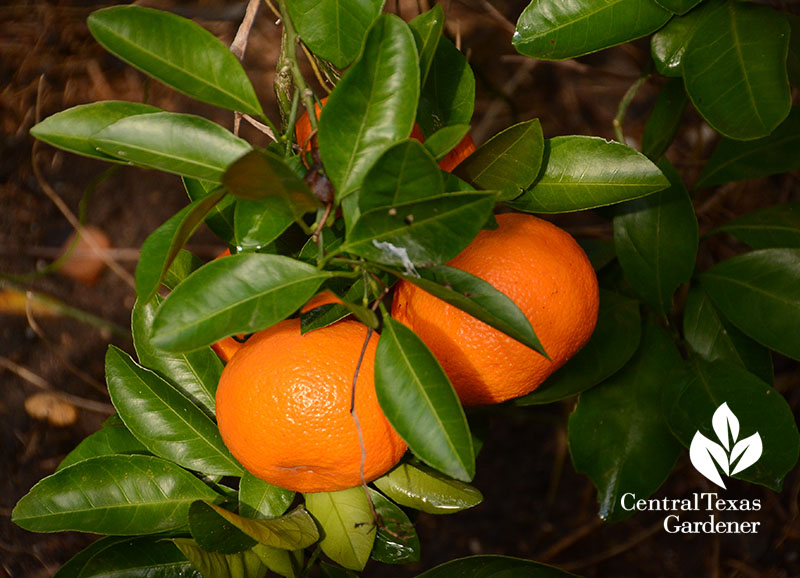 They’re also one of the cold hardiest citrus varieties for Texas. I planted my ‘Mr. Mac’ satsuma in 2008, and although nipped a few times, it always bounces back. 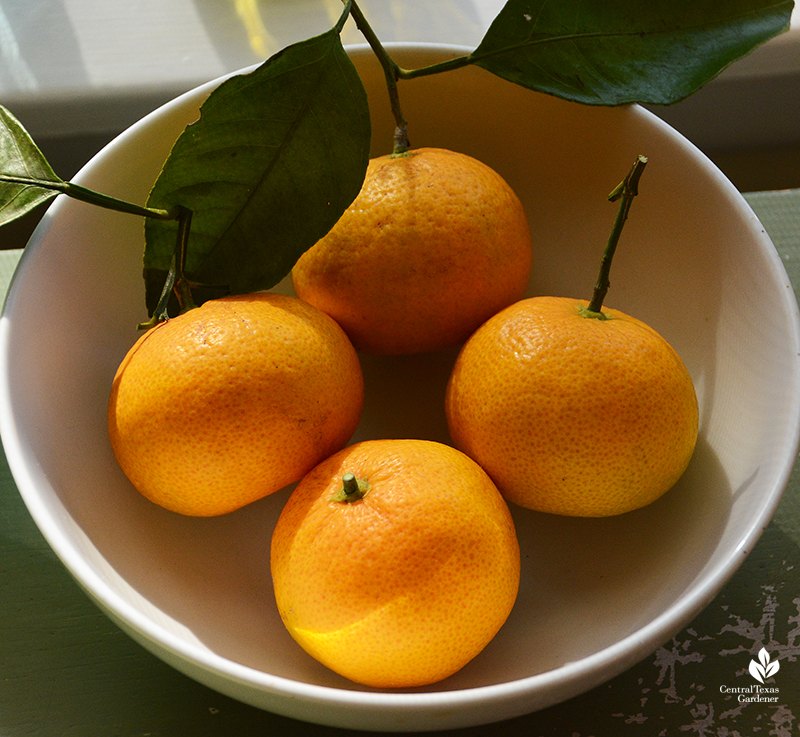 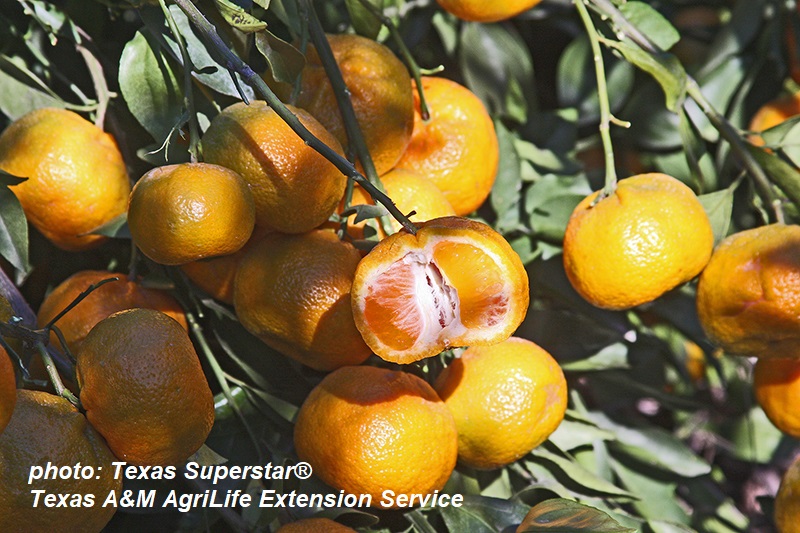 ‘Arctic Frost’ is another Mandarin hybrid with cold hardiness.

Here’s a Texas A&M guide for growing all kinds of citrus, like Meyer lemon. 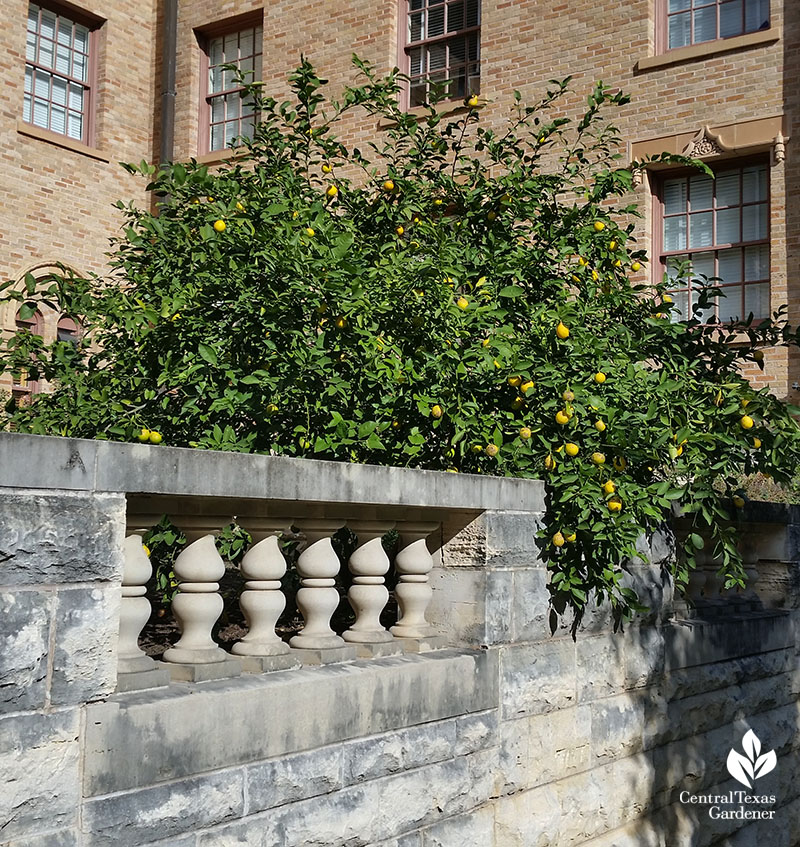 My container-grown calamondin rarely stops pumping out oodles of quarter-sized fruits. Rather mouth-puckering (like lemons), mainly they’re used in marmalades, drinks, sauces, entrees, and desserts. Craving a SweetTart zing, I just ate one while writing this. 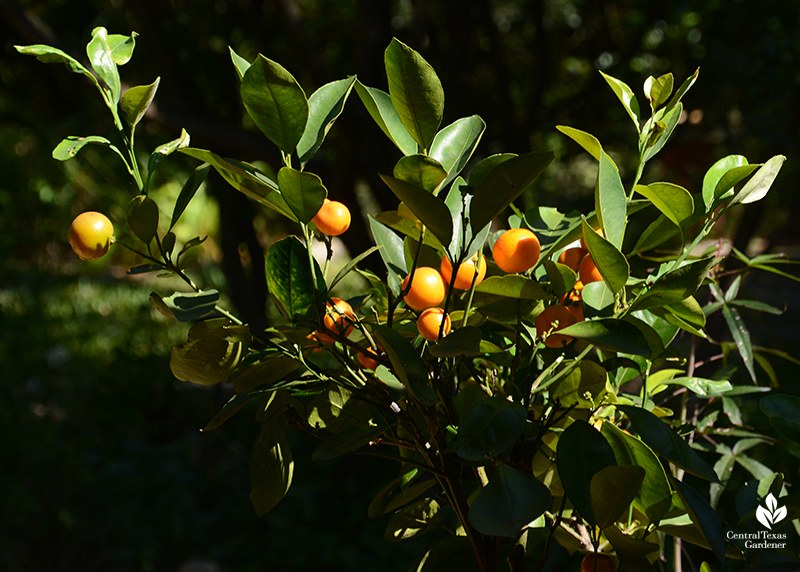 From Texas A&M’s guide to growing calamondins (click on internal link to calamondins), I learned that they’re used as a cough remedy, hair conditioner, and deodorant. They can take the itch out of insect bites and bleach ink from fabric. What a deal! 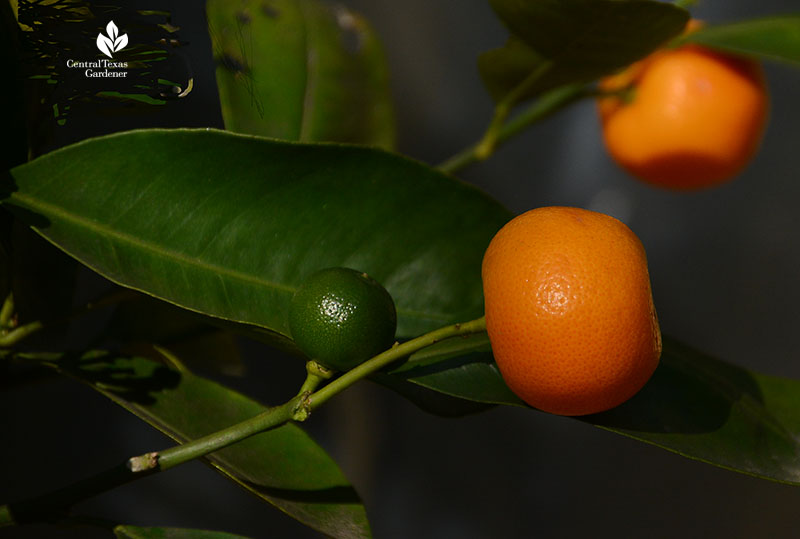 Although calamondins are rated to 20°, they can get nipped in winter. Now that mine’s established, I don’t bother to cover it, since it’s on a sun-warmed stone patio near the house, though containers are definitely more susceptible to freeze. Last February, after days of warm weather, we got a surprise dip to below 30°. A few fruits “exploded,” but others were fine and it kept on producing. 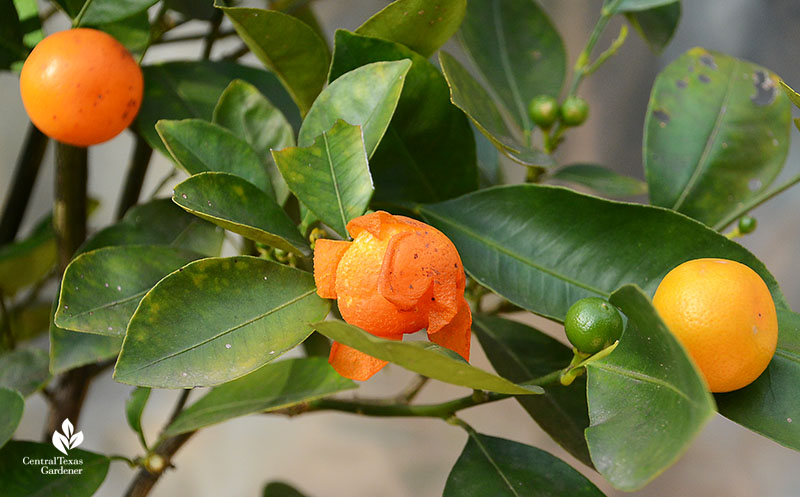 Some persimmons, like our native Texas persimmon (Diospyros texana), are just as tart until they sweeten up when completely ripe. 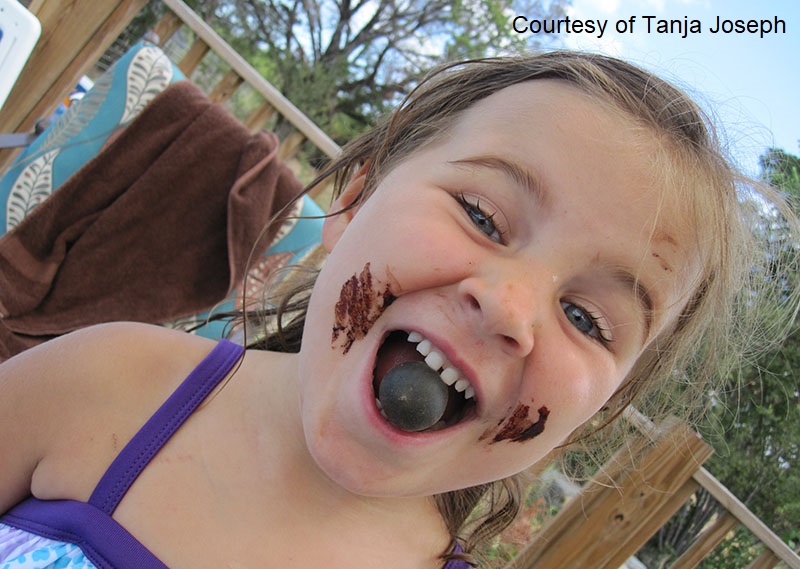 After noshing into a juicy Asian persimmon last December in Jane and John Dromgoole’s garden, I vowed to plant one. Sigh, still on the list. 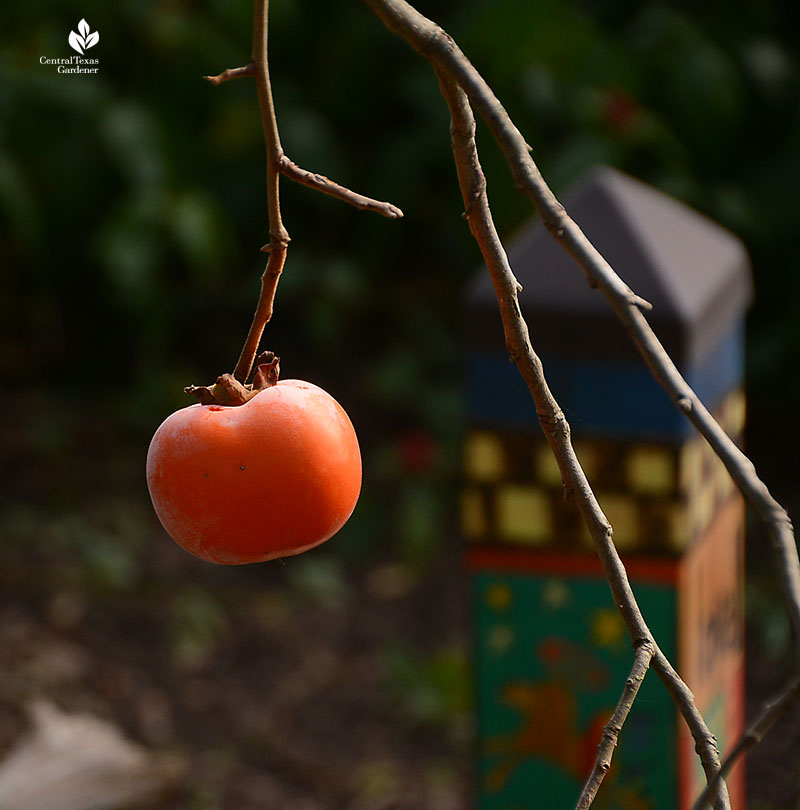 “There’s always next year,” we gardeners say, and that’s coming ‘round the bend. January and February are the best times to plant fruit trees. Some Asian persimmons like ‘Hachiya’ and this ‘Tanenashi’ at Lake Austin Spa are astringent until ripe. They’re Trisha Shirey’s favorites for eating, baking, and storage, and in fact, she just planted a ‘Tanenashi’ in her new Ft. Worth garden. 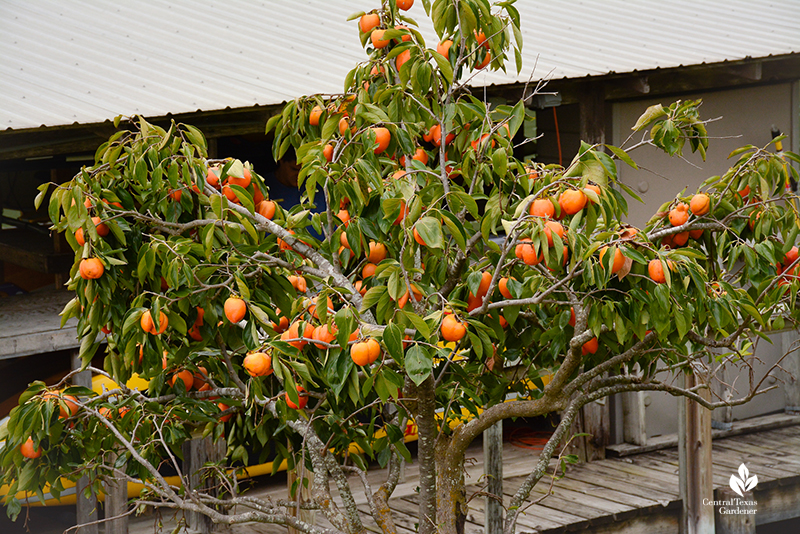 Others like seedless, non-astringent ‘Fuyu’, can be eaten while still firm. Find out more about persimmons, including the Texas native. 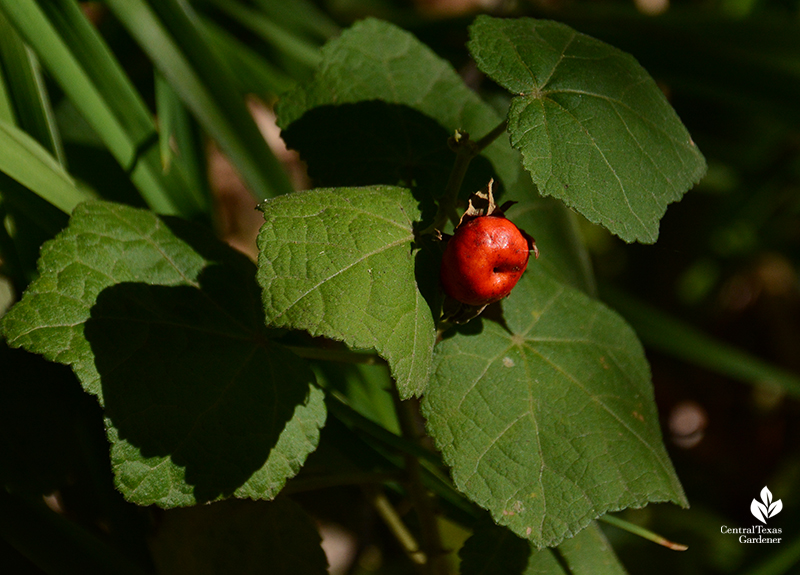 It’s been almost two months since we’ve seen measurable rain after weeks of record high temperatures. But in late September, 14 inches fell in just three days outside Meridian northwest of Waco. Ten-year-old Isabella Strickland was on the spot between online classes to grab a shot of these mushrooms that benefit the soil. She and her granddaddy, Don Fisher, watch CTG together every Saturday! 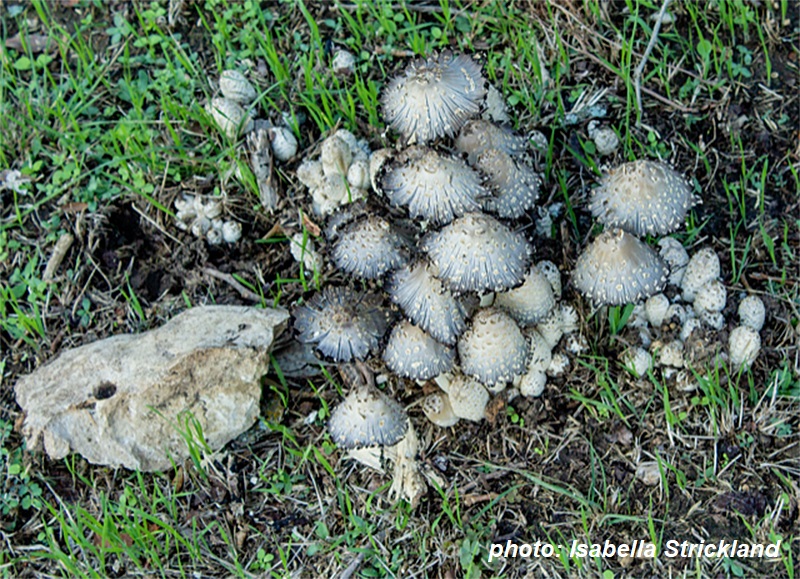 That’s just one of the many fantastic CTG viewer finds across Texas this fall. To round up contributions through October from our hands-on gardening neighbors, Daphne and Augie went in front of the camera again, albeit this time behind Daphne’s phone in her living room. 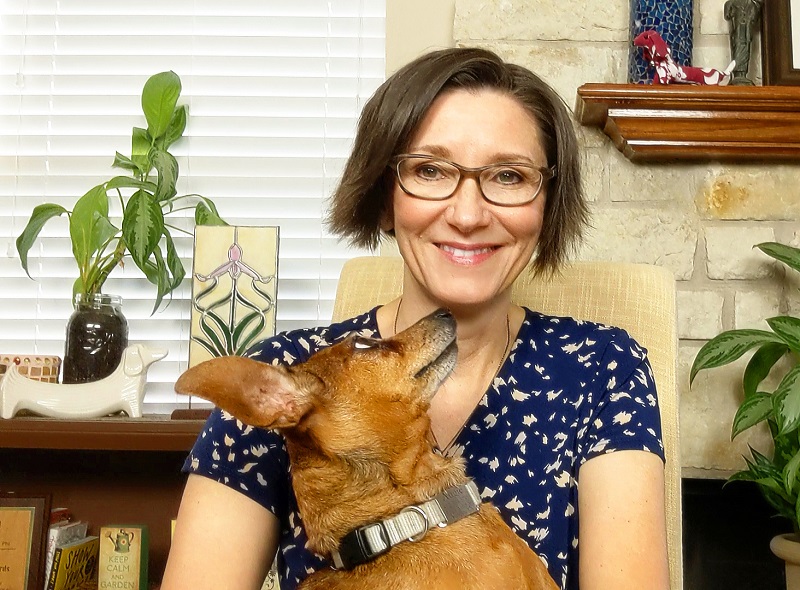 We got some interesting questions, too. In Van Alstyne, southeast of Sherman in north Texas, Jennifer Vince-Recksiek and her husband planted gorgeous red-orange cannas this summer. Then, they noticed that one bloomed with a small section of yellow petals with a smattering of red-orange splotches. Jennifer reports that this only happened once and that later blooms have all been the original color. 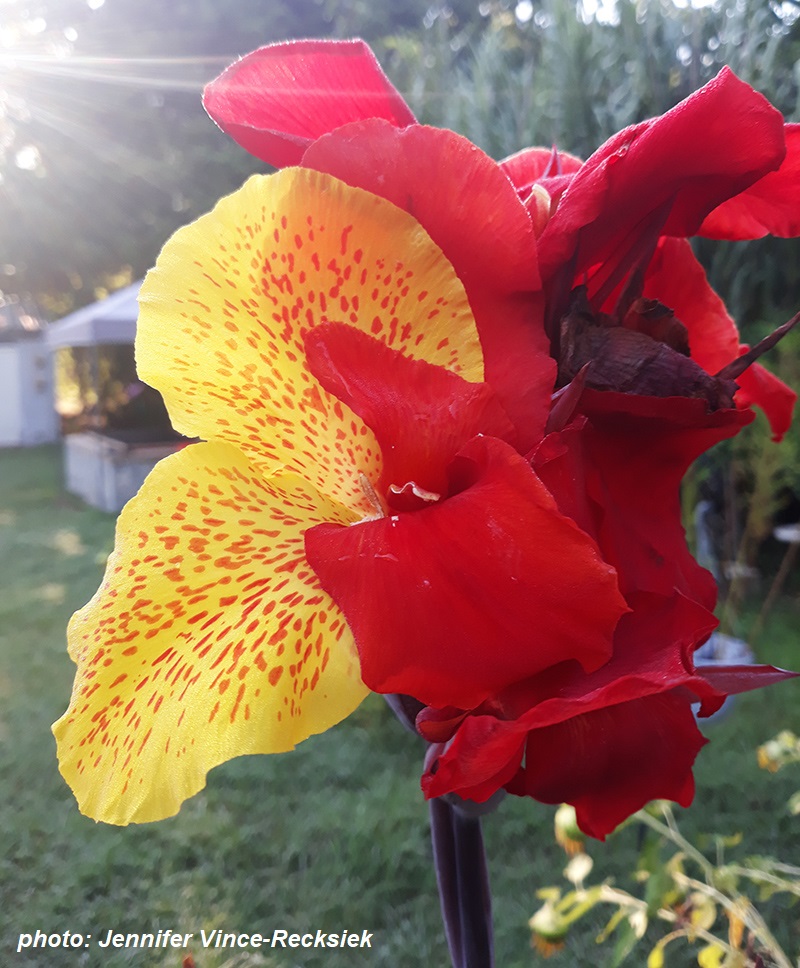 Then Ivan sent in a shot of his beautiful zinnias (beloved by butterflies). One gorgeous red popped up white petals streaked with red. 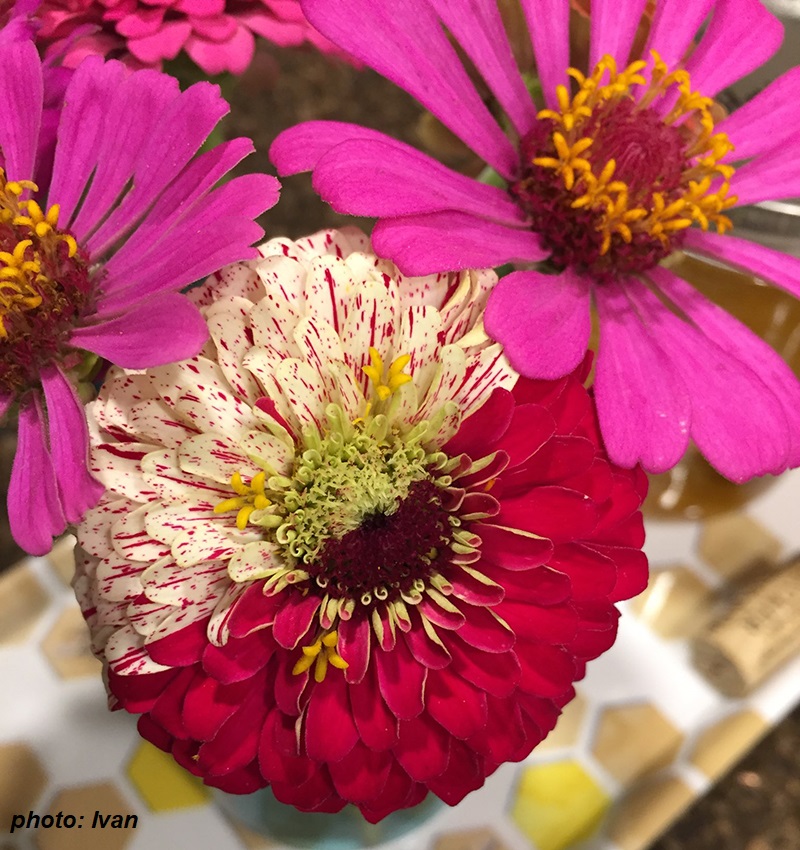 Daphne tells us: “The anomalous behavior in both plants is the result of a somatic mutation, spontaneously occurring for unknown reasons in only one or a few cells, resulting in those cells expressing different physical characteristics than the rest of the plant. In horticulture, this new tissue, especially if it is aesthetically or otherwise pleasing and can be propagated asexually and maintained, is known as a ‘sport,’ or a chimera. Somatic mutations aren’t inheritable, so their characteristics aren’t passed down to any offspring, and this anomaly may or may not ever appear again.”

Several gardeners submitted shots of their Stapelia gigantea flowers that are indeed gigantic, as we see in Terry Biegler’s photo. They’re also known as “carrion plant” for their rotting meat fragrance, enticing flies to pollinate them. Different strokes for different insect folks, you know! 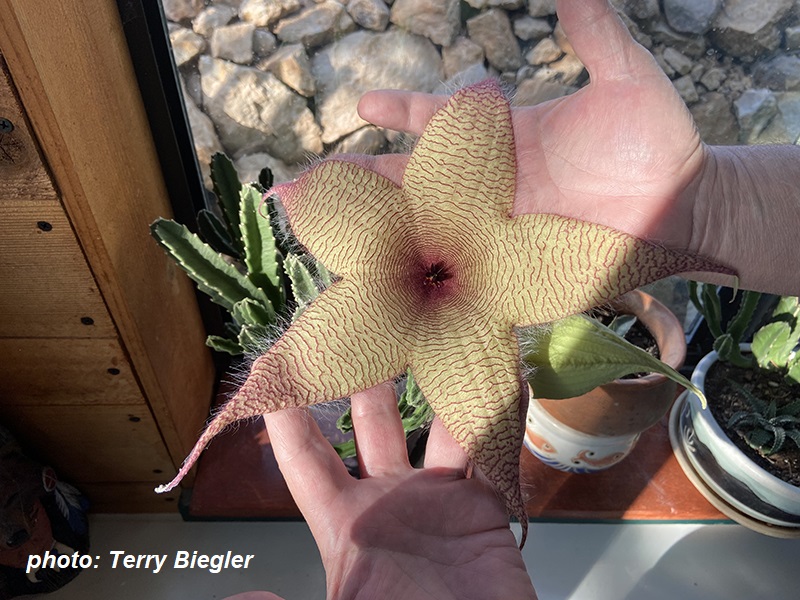 A molting anole waits to catch one of those flies in Somer Pugliese’s Horseshoe Bay garden. 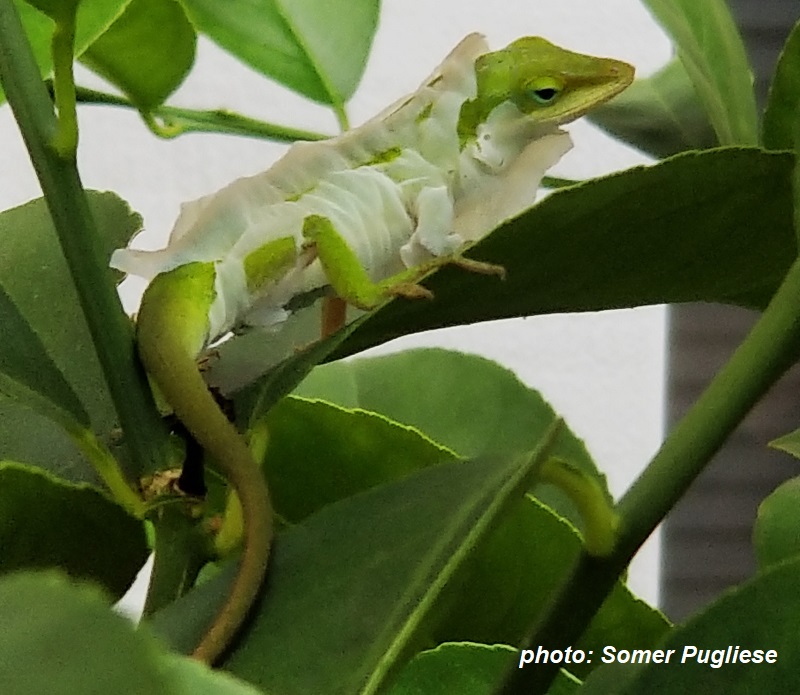 ← The Natural Gardeners: Jane and John Dromgoole
From Drought to Deluge: Top Tips for Garden Success →