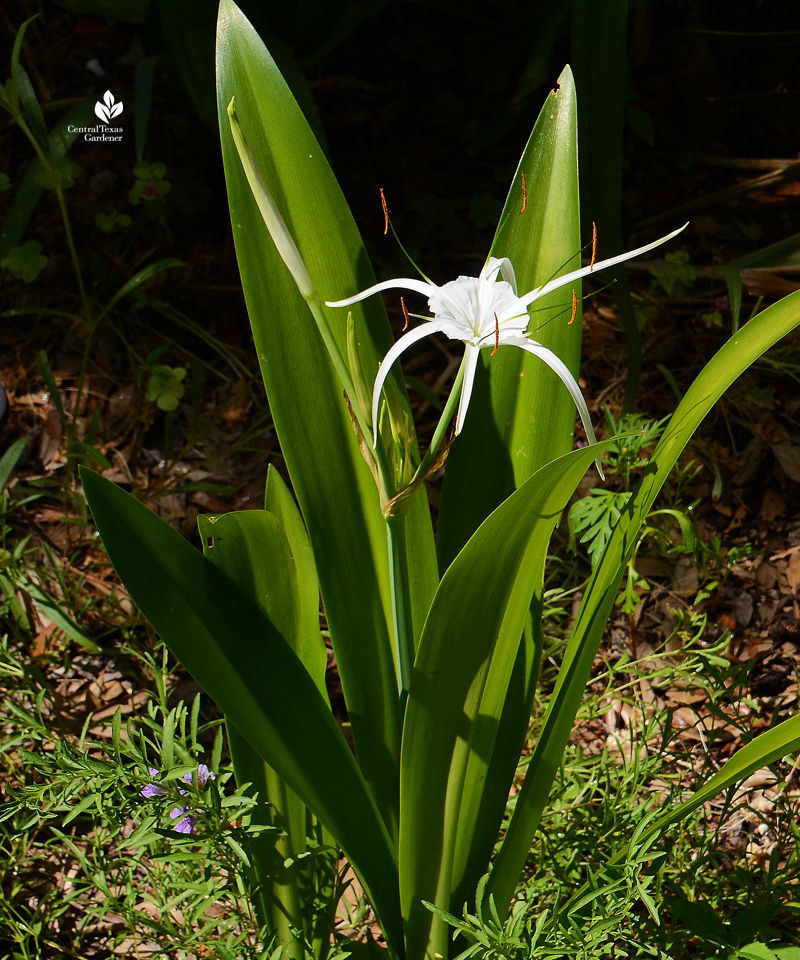 The spider lily’s ant fan club industriously trailed from ground to leaves to deep orange stamens and then across petals. 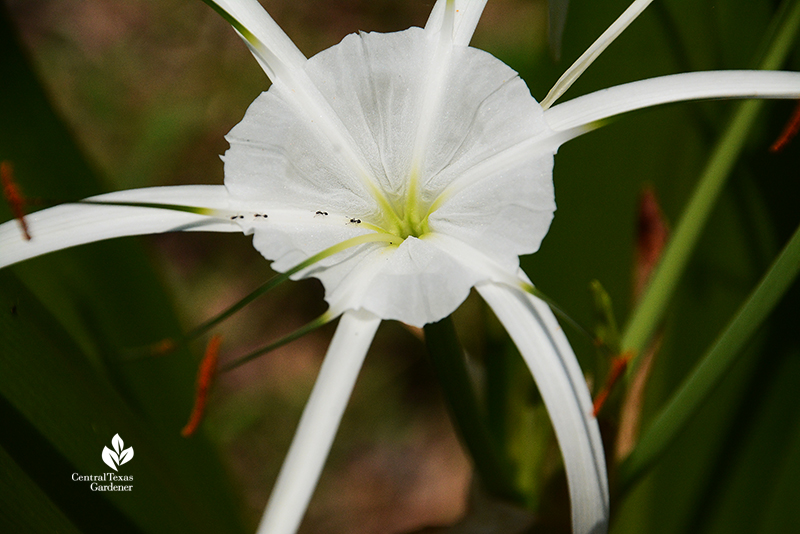 These tiny ants dived deep into the nectar tube, emerging later to make a left turn and return home. I watched exit ants “head bump” approaching ones, apparently to confirm by smell that newcomers have colony credentials (laminated badges would fall off, you know). 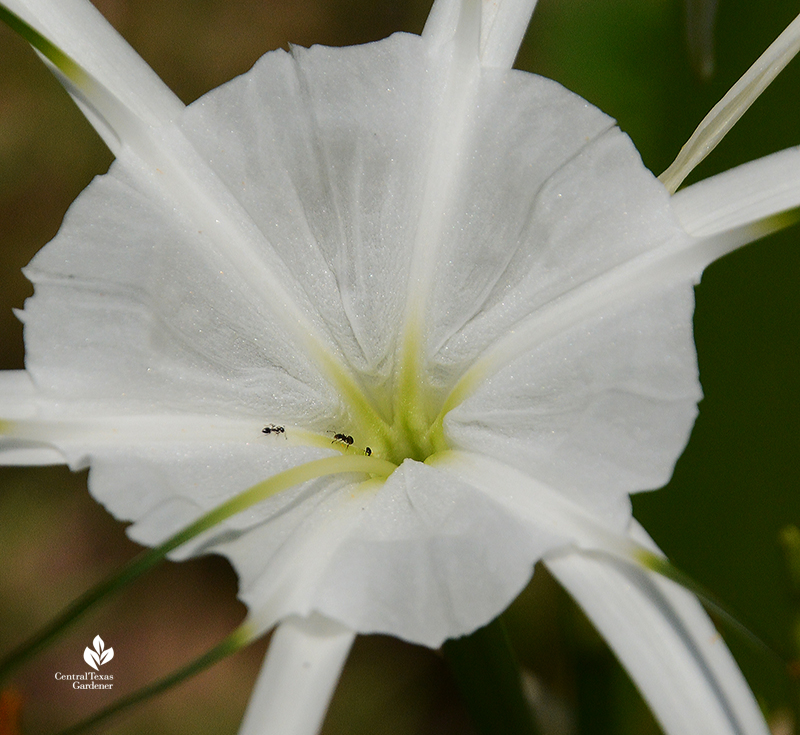 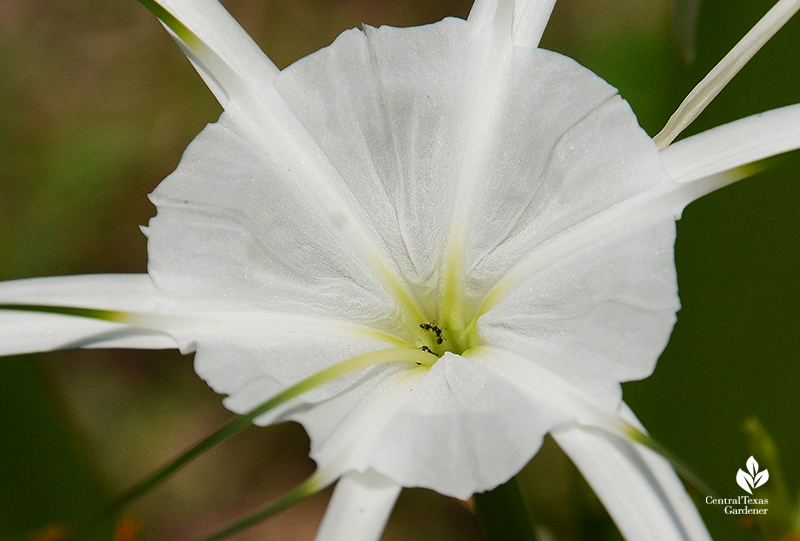 Maybe they wanted to celebrate National Pollinator Week (June 21-27 this year), though the real mission is to make every day a favorable one for pollinators. Right now, Pride of Barbados (Caesalpinia pulcherrima) surprisingly bounded back from February’s freeze, its fiery flowers intent on flagging down bees, wasps, and other pollinators. 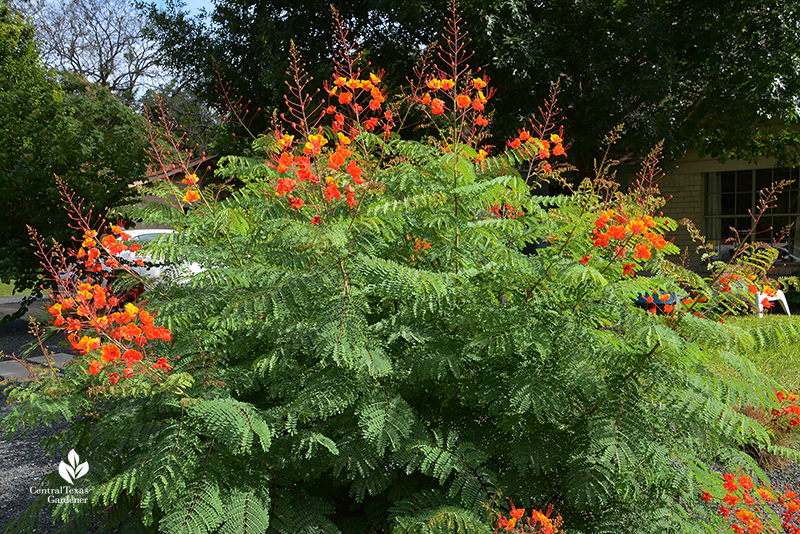 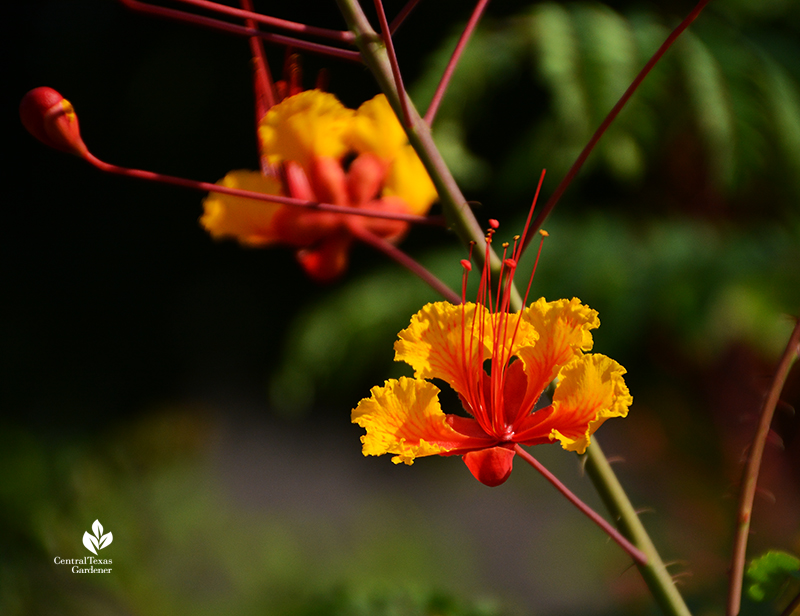 CTG viewers sent in their own wondrous observations from late spring, so Daphne joined us again from home to tell their stories. Augie’s taking a vacation from Zoom meetings to hang out with Daphne’s dad, so his younger sidekick Lulu directed! 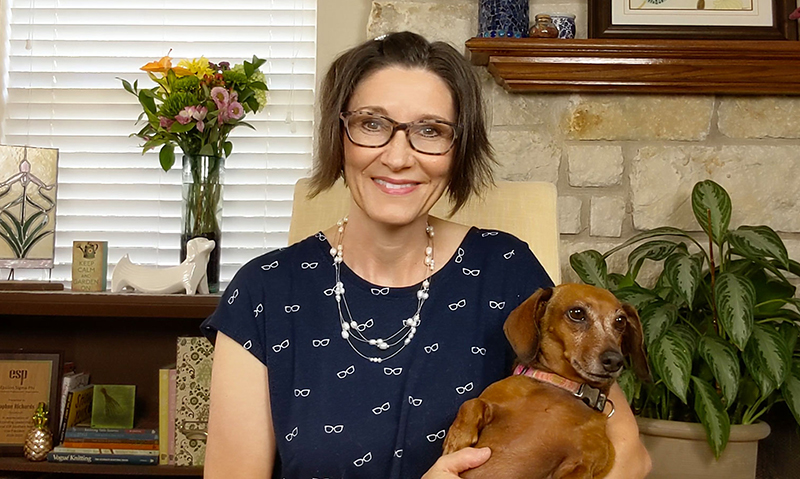 Across the state, many gardeners shared elation that their beloved plants aren’t permanently on vacation after their big winter scare. Camille Feliz documented her tough-as-nails Peggy Martin rose speedy transformation. 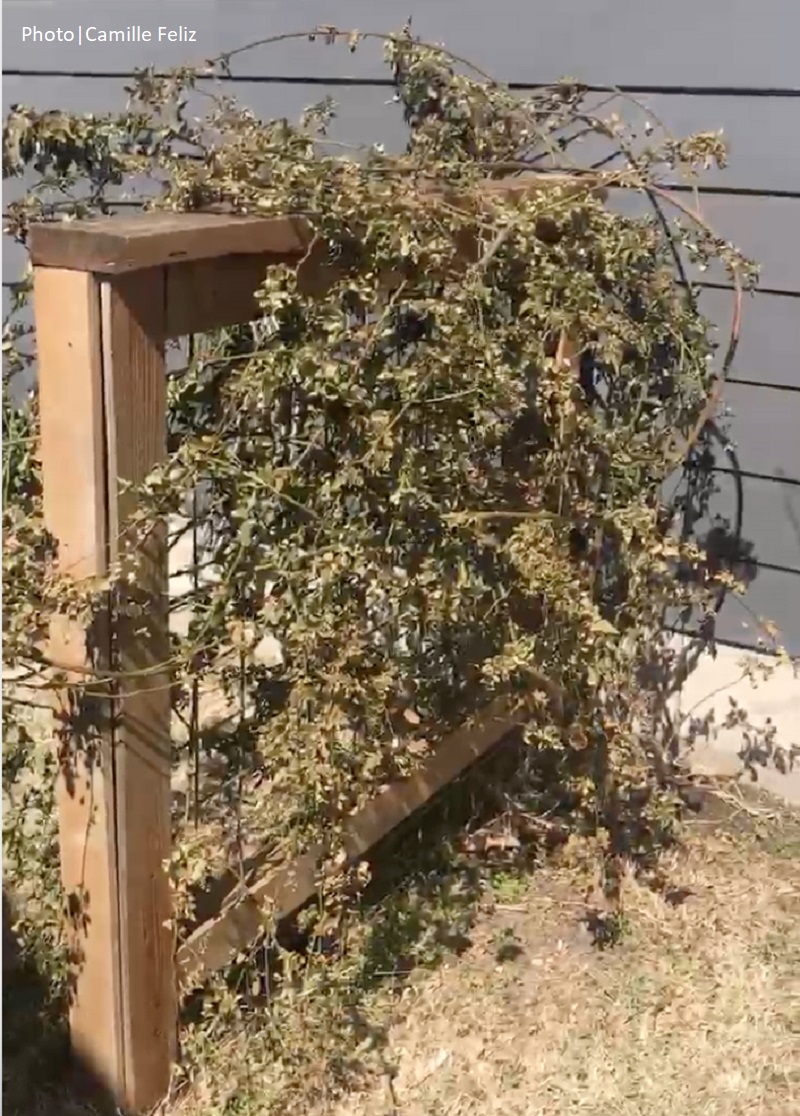 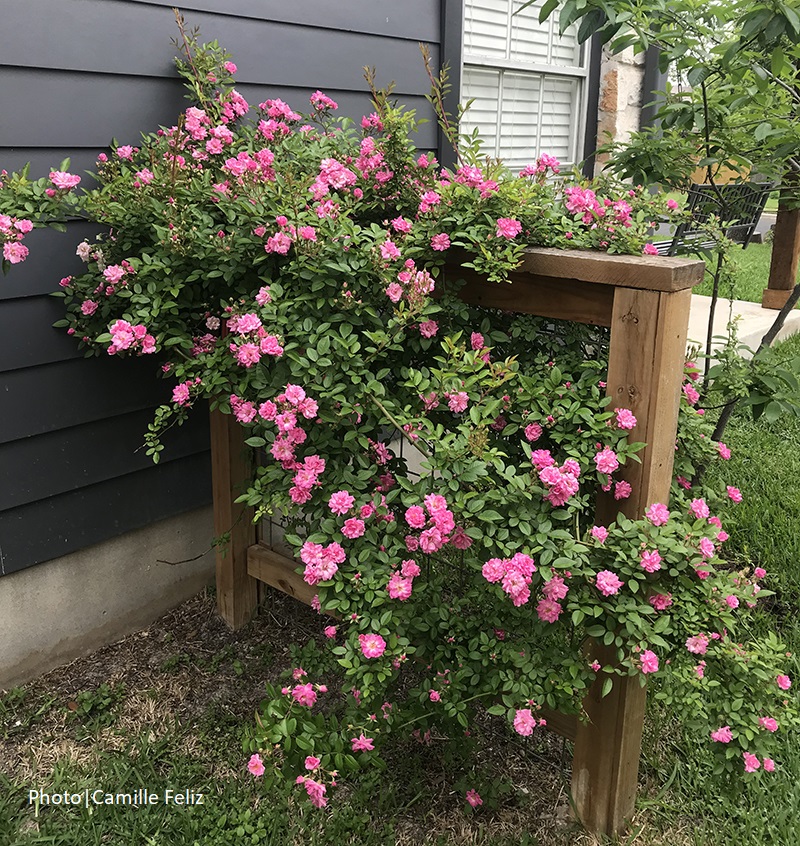 “It’s so renewing and heart-warming to see the things that do return after what they went through this February. My heart cheers for them when I see the comebacks!” she said.

Yet, yards still buzz with chainsaws. In Round Rock, Jan Kuehn’s bay laurel was almost 20 feet tall when the freeze got it. After her husband cut it back, Jan’s documented its rapid recovery over the months. 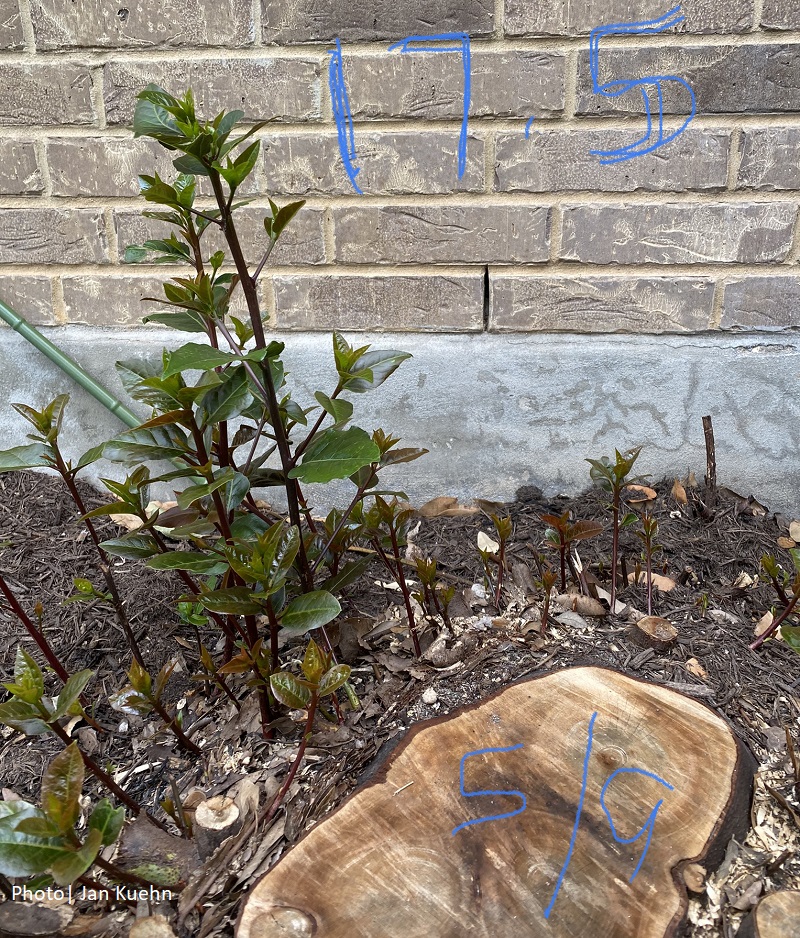 By late May, it was over two feet tall, tripling in height since April. 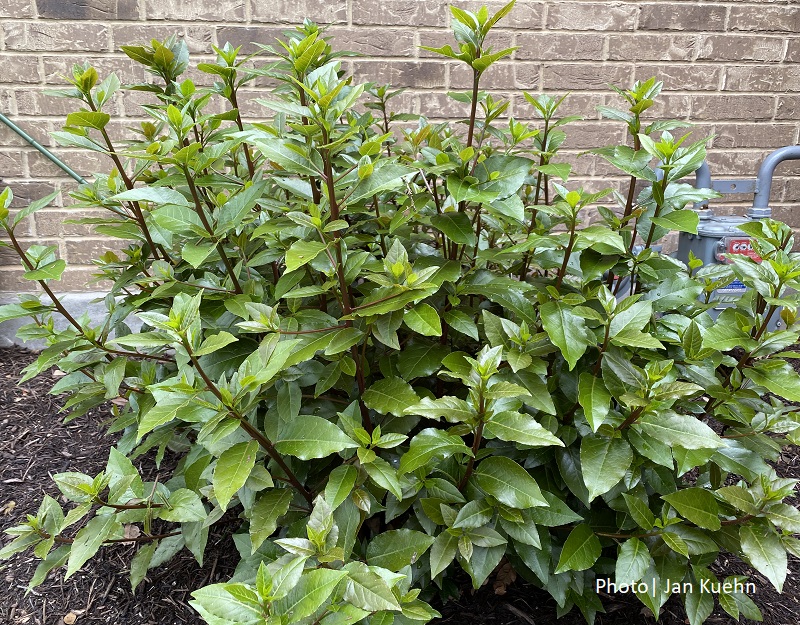 Mine in late June is getting mighty close to five feet tall, so I bet Jan’s will hit the 20-foot mark sooner than later! To the left are native Barbados cherry shrubs that looked pretty sad even a month ago. 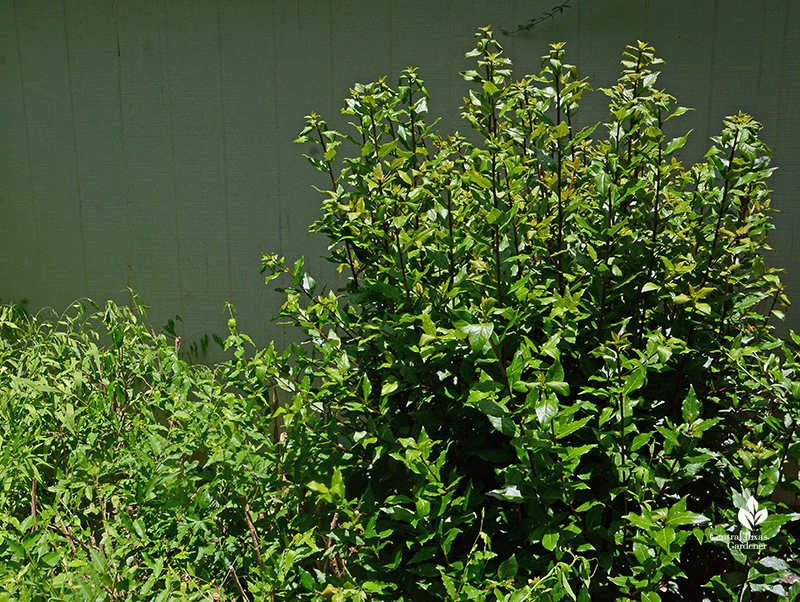 Sadly, even though I protected my Mangave ‘Bloodspot’, I lost the mother plant in its container and some of its offspring. Fortunately, I’d passed along one of the first bulbil-grown plants to Austin PBS colleague Sara Robertson who did a better job of keeping it warm! By the way, mangaves are a cross between agaves and manfredas. 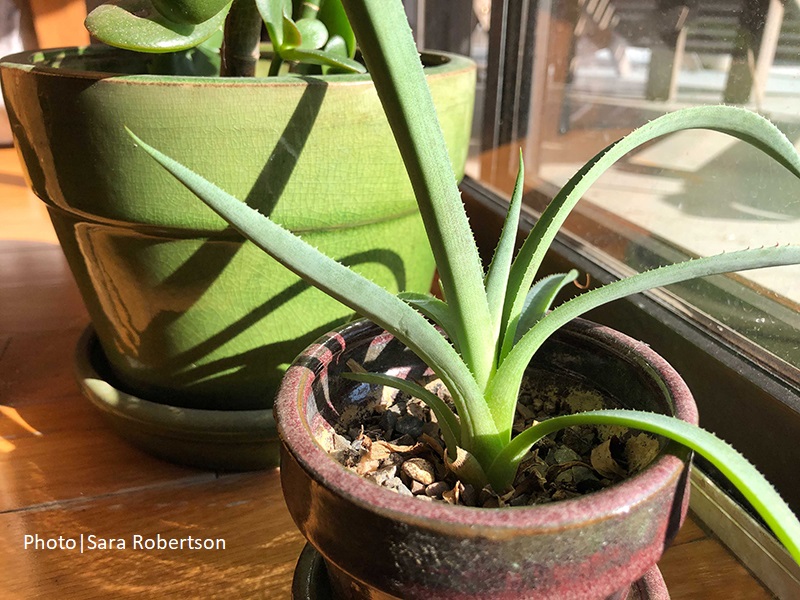 This spring, she pepped up a container with a stunning ‘Mint Chocolate Chip’ manfreda that popped a stellar flower stalk within weeks. 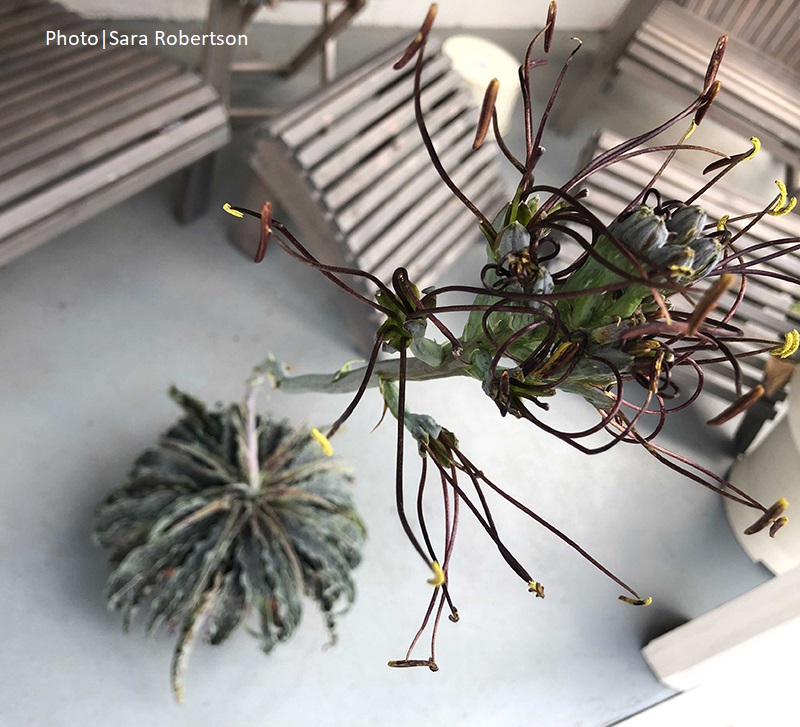 A hummingbird zipped over pronto! Kudos, Sara, for such a quick catch! 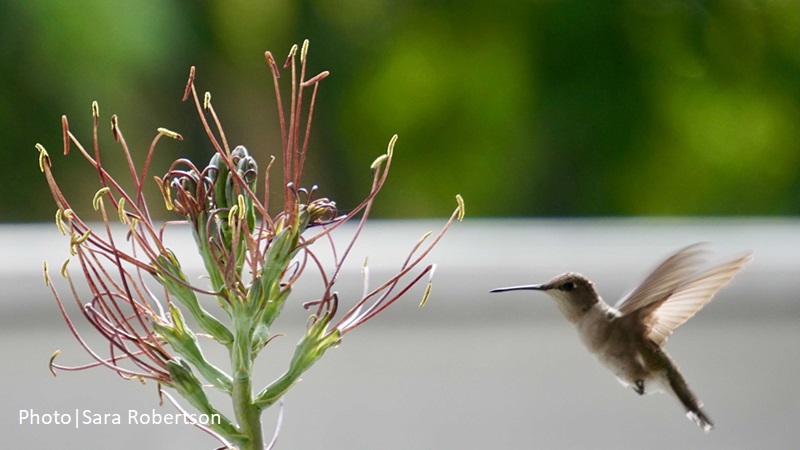 But why did fall-blooming asters put on a spring show, too? Daphne explained, “Like most creatures that find themselves out of sync, it’s all down to the weather. Unseasonable cold was followed by unseasonable lack of sunshine, and rain, seriously messing with the normal rhythms of many natural occurrences.” 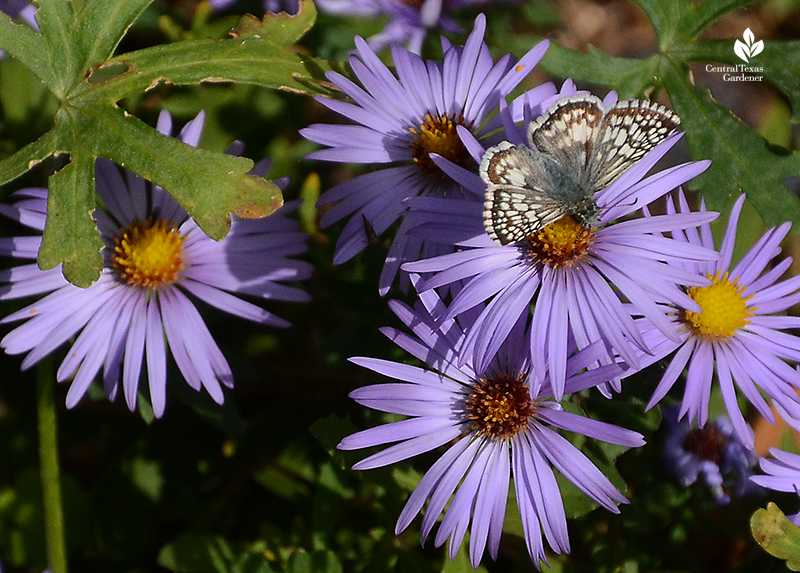 The downside to rain and saturating humidity is that fungal populations exploded. “From leaf spots to wood-rot, fungi are everywhere,” she noted. My own native Virginia creep vine suffers from a leaf spot in spring humidity, but it rallies quickly with no harm done to its vigorous creeping. 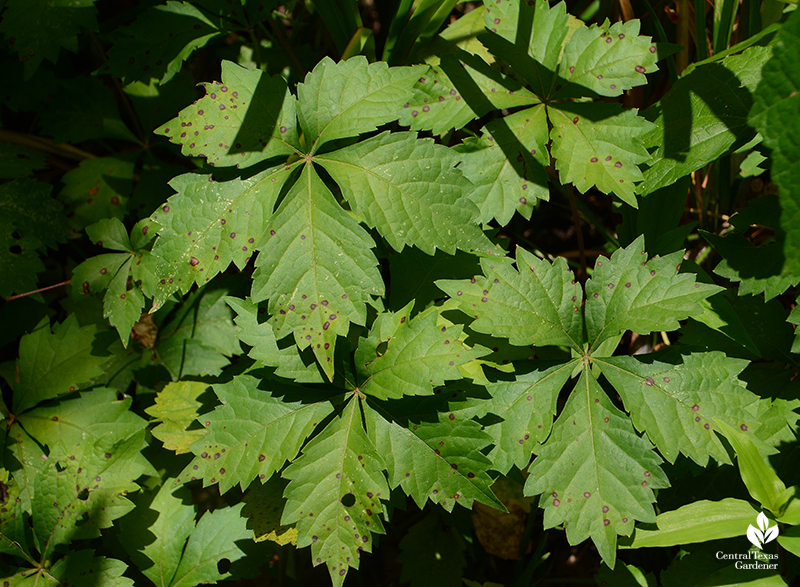 Andy Campbell’s new smoke tree looked very troubled. When he reached out to CTG, Daphne advised him to prune out diseased tissue and toss it. 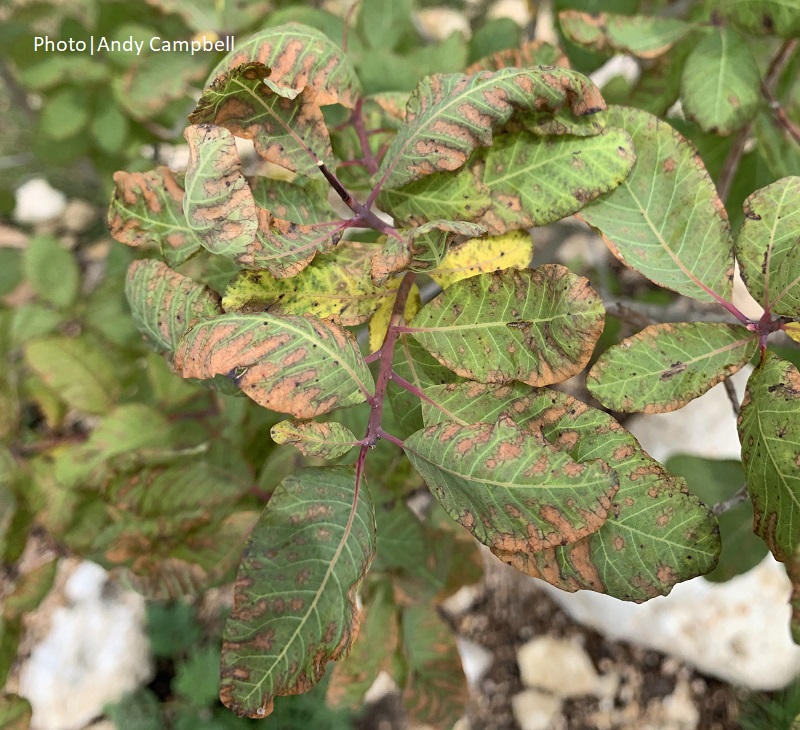 She knew that by the time new growth emerged, there’d be a better possibility of drier air and a less supportive environment for reinfection. I’m happy to report that by the time we recorded, Andy sent a photo of new, healthy growth! 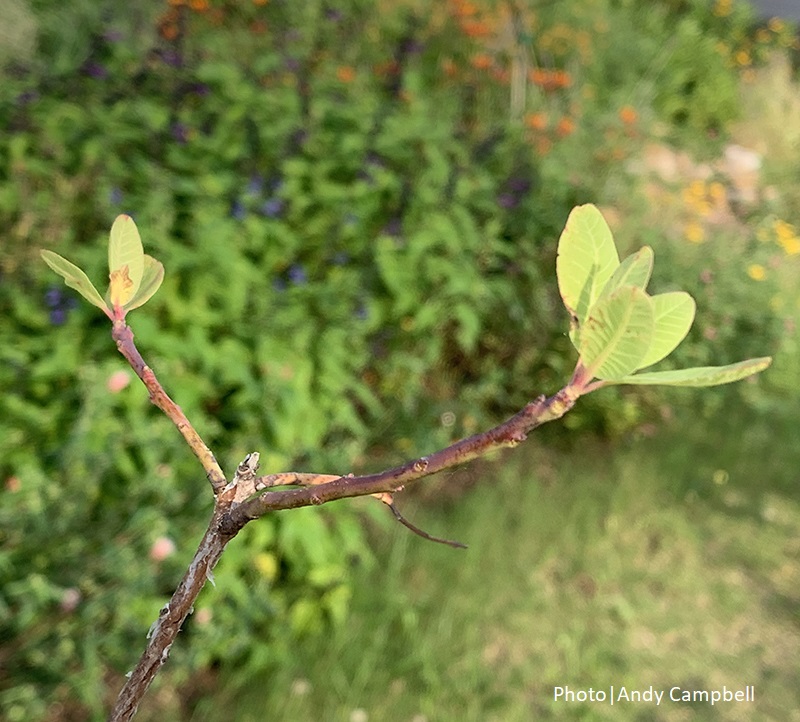 Rust is another common fungal disease. Ramona Rogahn’s daylilies suffered with yellow splotchy leaves in March 2020. Jeff Breitenstein and Skottie O’Mahoney (watch their garden on CTG) from the Austin Daylily Society told us, “Rust is a common daylily disease, especially in the South.” With daylily rust, the recommendation is similar to other fungal diseases—spray infected tissues with a registered fungicide according to label directions, then prune and toss the cut portions into the garbage. 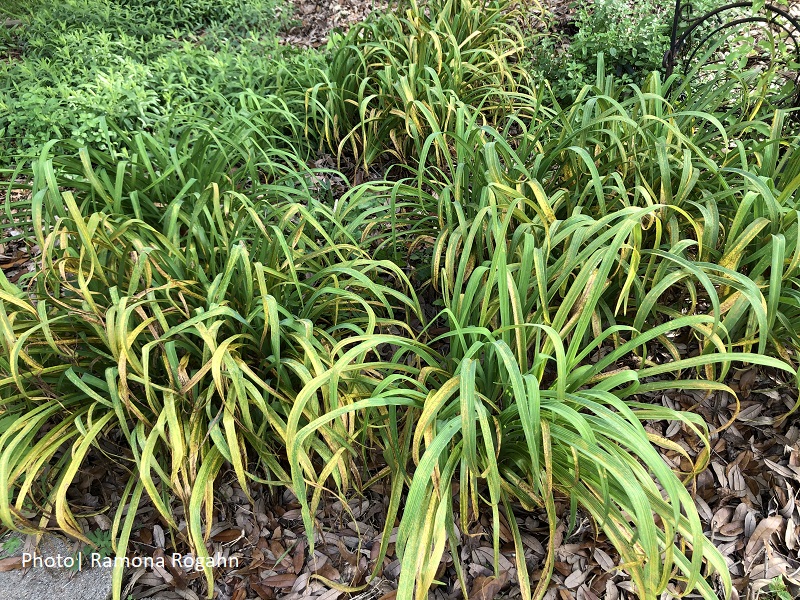 Insects didn’t take a break, either. Pratap Singh walked out one morning to find his bitter melon seedling severed about six inches above the ground. Since he hasn’t seen the culprit—either insect or animal—he built a cage that’s buried about an inch and half around the plant. He also recycles cut down plastic bottles as protective sleeves. 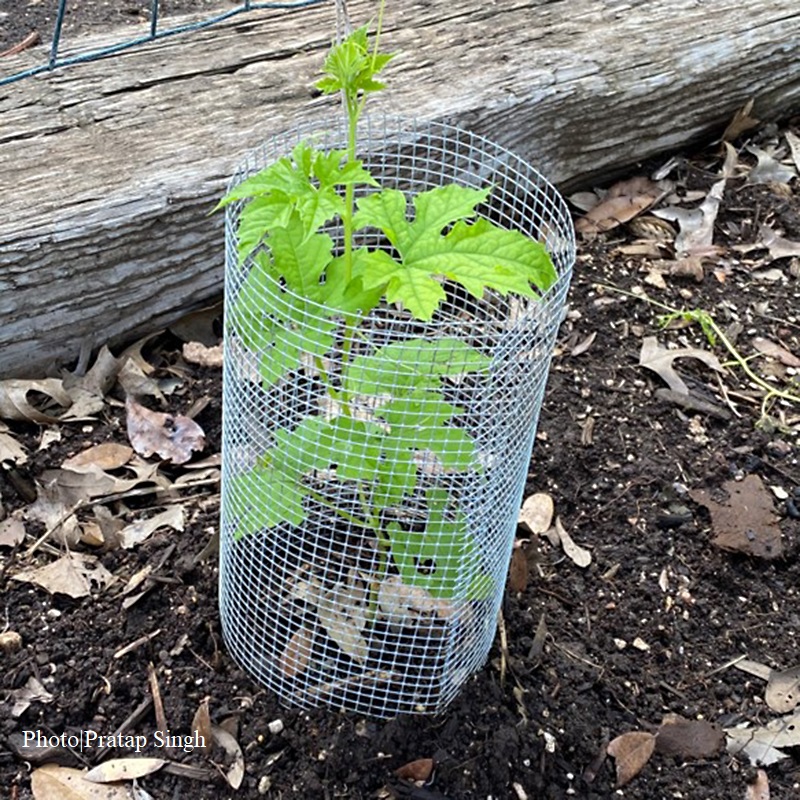 When he spots a snail eating the leaves, he removes it. Now, his bitter melons are thriving and so are his yard long beans and cucumbers.

Pratap also cages his tomatoes, but in this case, he wants to manage indeterminate varieties that can get six feet tall, quickly over-growing the standard hoop cages. His method: first, get t-posts, and then attach wire mesh. As plants grow taller, tie branches to the wire. The open mesh allows easy picking of ripened fruit. 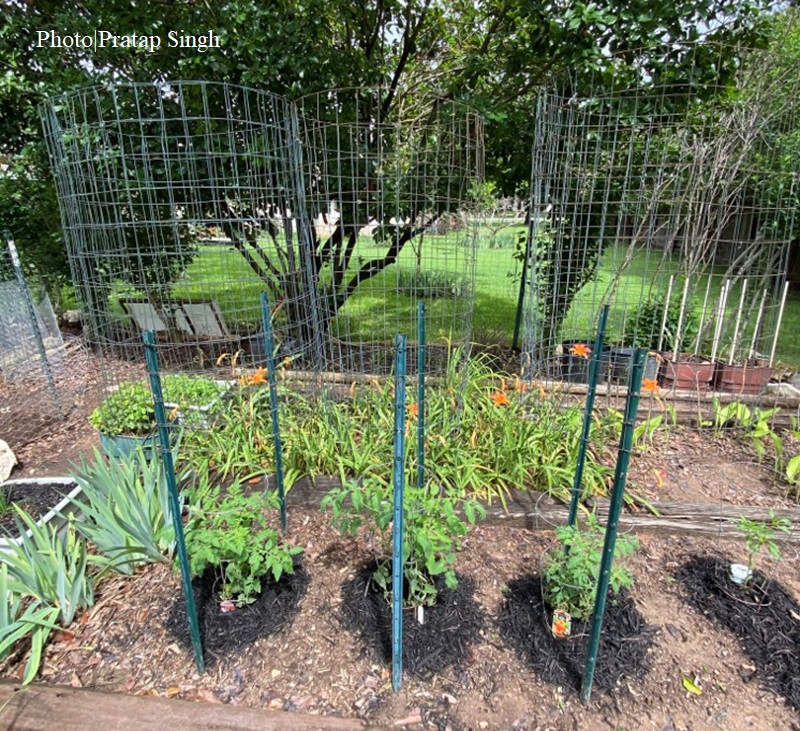 Some of us found chompers that we really want—butterfly caterpillars. Helen Johnson got a bonus Monarch caterpillar on a plant she brought home from the nursery, later watching it pupate and emerge as an adult. 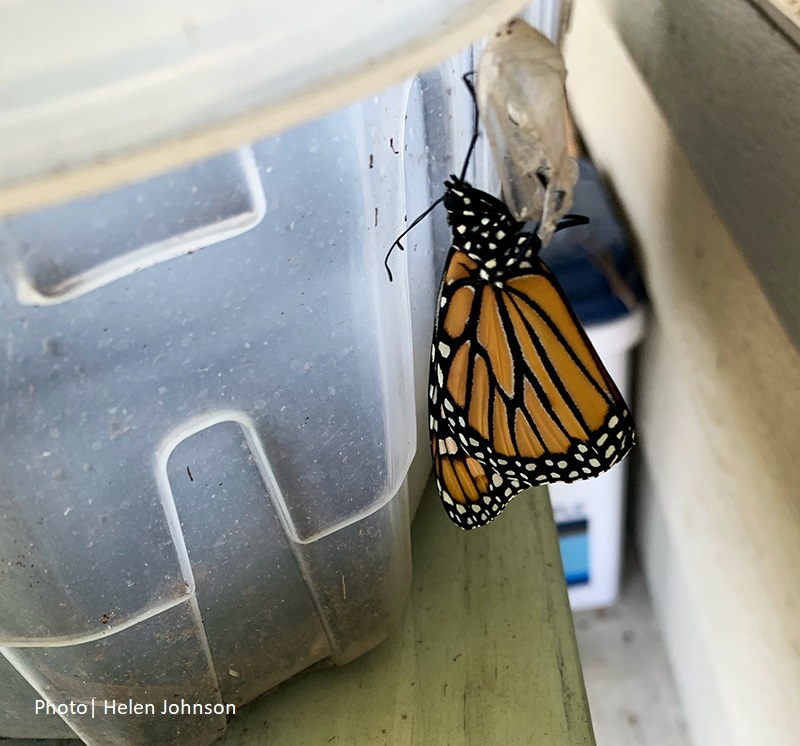 Ginger Magnuson hosted a whole nursery of Swallowtail caterpillars on her fennel, dill and parsley. I grabbed a still from her video. 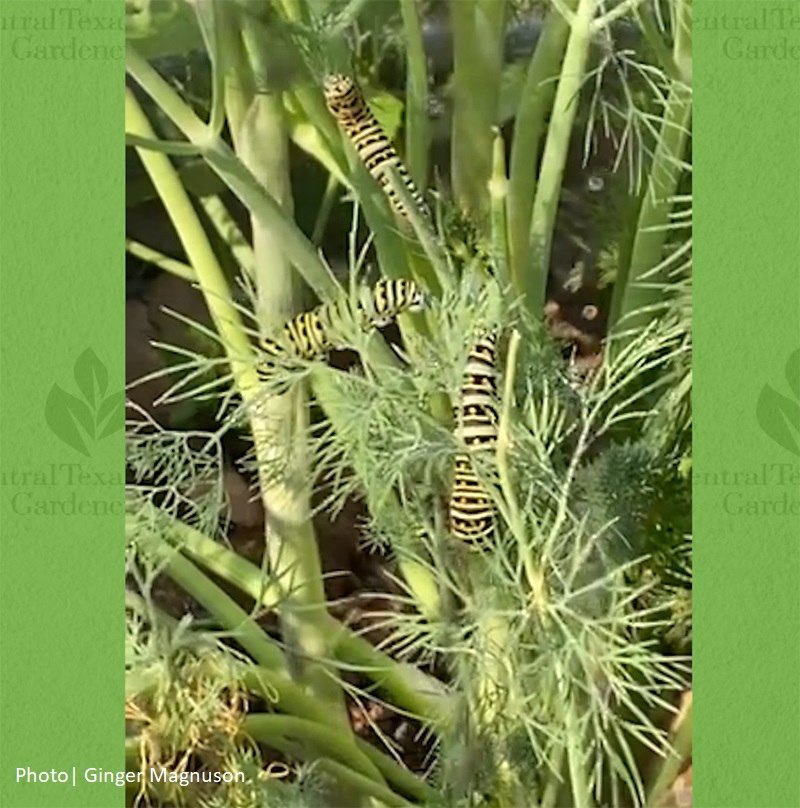 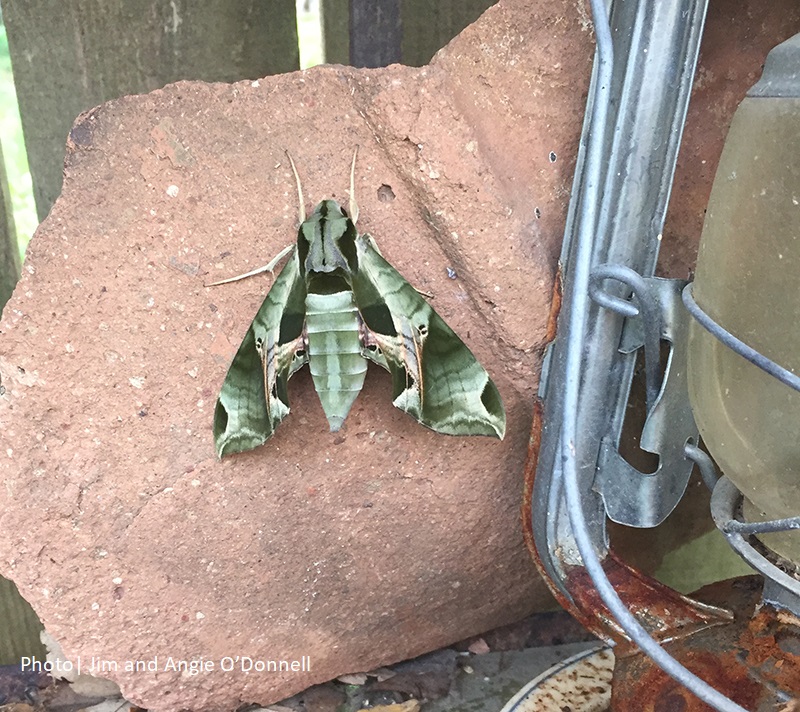 Agnes Fajkus in Fayette County renewed the spring garden with a border of fragrant alyssum against yarrow, salvias, and other pollinator perennials coming back.

Our Arkansas friend Roy Wilson shared another of his swoon-worthy magnolia pictures! 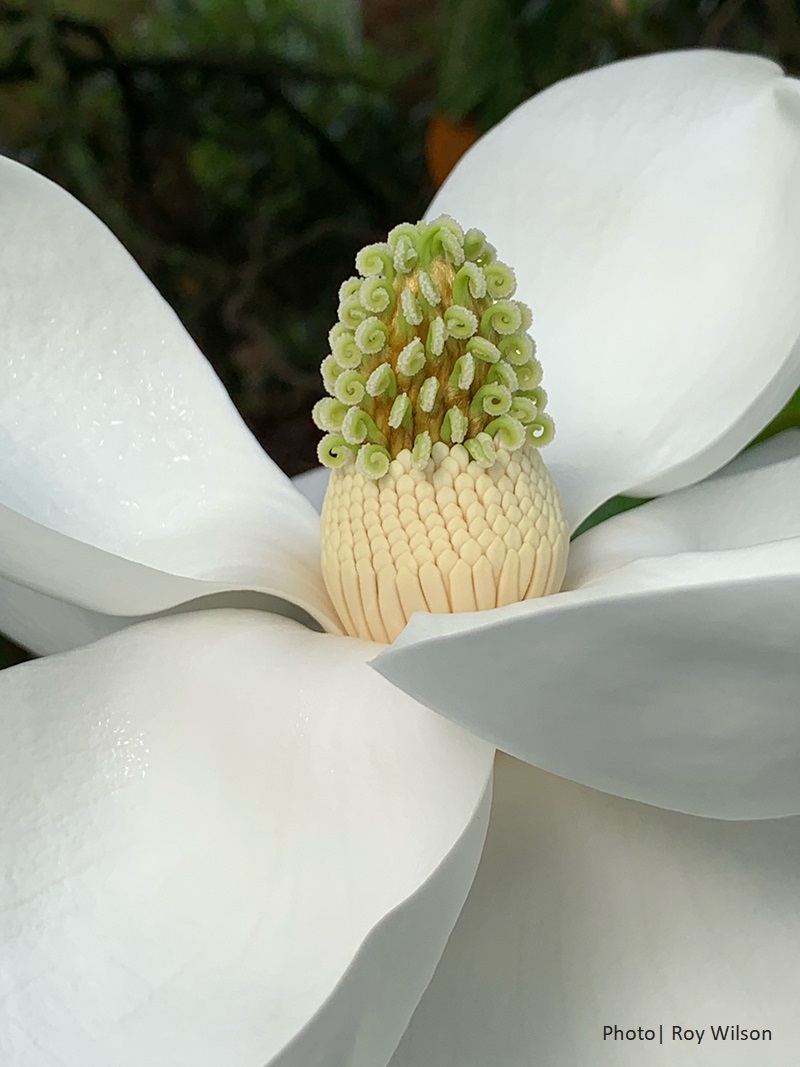 Mark Sepulveda cheerfully dubs his backyard as the “garden of chaos.” The freeze wiped out most of his succulent bed, but he’s starting over with smaller cacti and fun statues. We love his philosophy: “One thing about gardens: you can change them. . . whatever.” 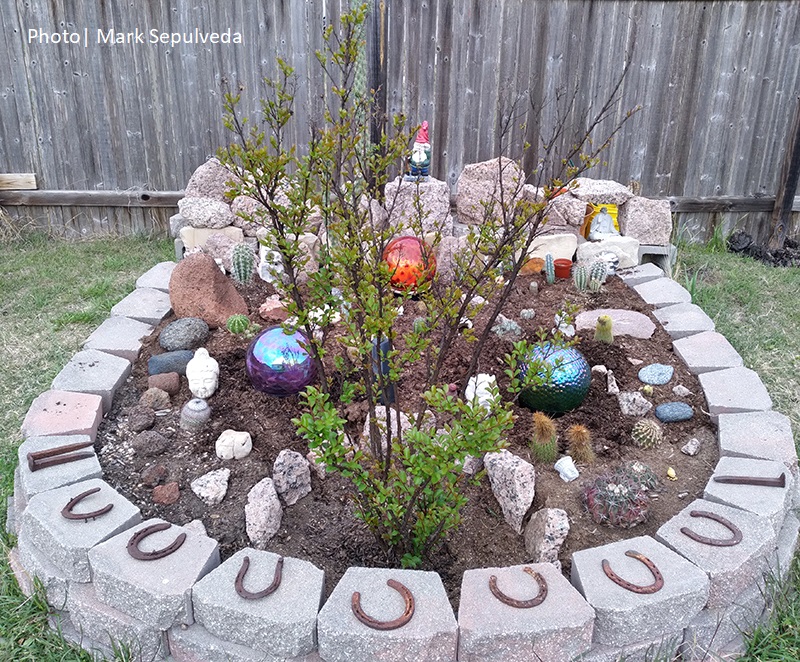 Watch now for all the stories and tips on growing weather-proof native rock rose!

← Summer Bugs: Trouble or Not?
Farm Fresh: Keepin’ It Local! →