Summer Bugs: Trouble or Not?

From a recent tweet: “Why is there no cicada emoji? After all, we’ve had 17 years to make one!” Well, I suppose it IS possible to forget pounds (tons?) of them. 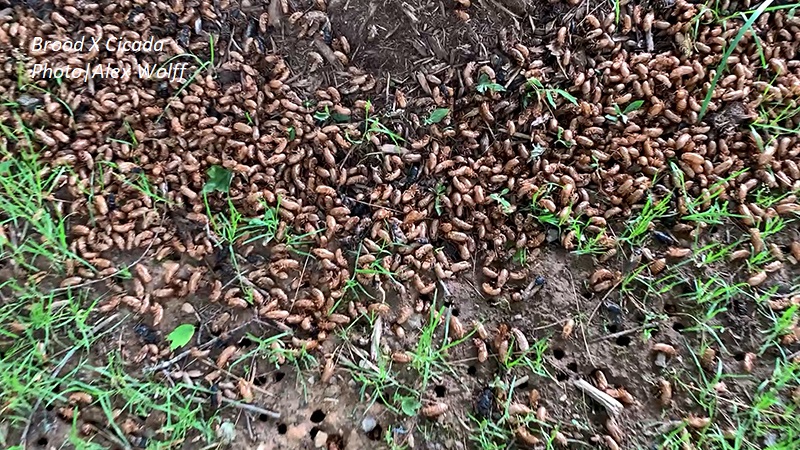 I mean, if you just graduated from high school, you won’t see this again until your mid-30s. Austin PBS, KLRU colleague Alex Wolff happened to be visiting family in the Northeast while I was prepping this segment and kindly grabbed video of Brood X cicadas. 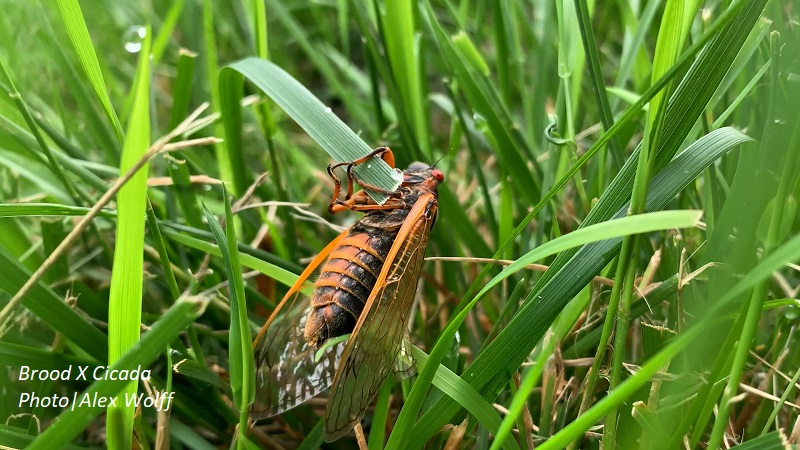 Be assured: We won’t find these 17-year-cycle cicadas creating (even more) traffic congestion! In this week’s working from home conversation with Texas A&M AgriLife Extension entomologist Wizzie Brown, she confirmed that we do not have them in Texas. “The Brood X cicadas that everyone is talking about are on the Eastern seaboard as well as in the Midwestern states,” she said. 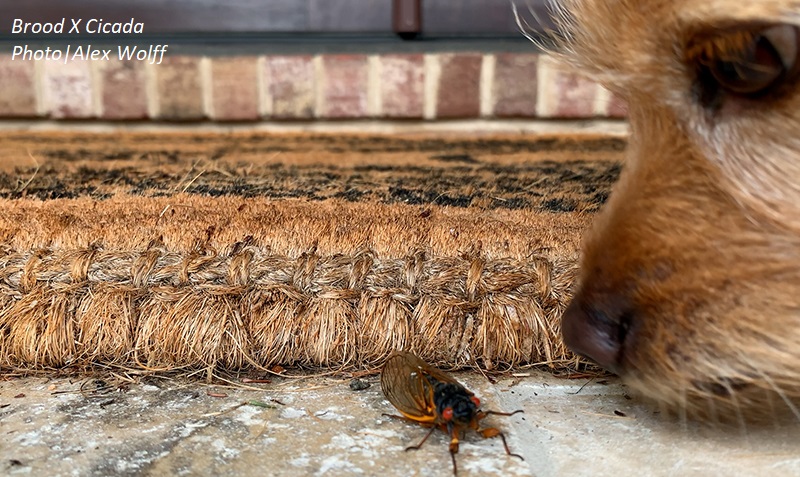 We do have cicadas in Texas. “We have annual cicadas; we have some that are on varying year life cycles (2-5 years), but they’re just a sound of summer.” 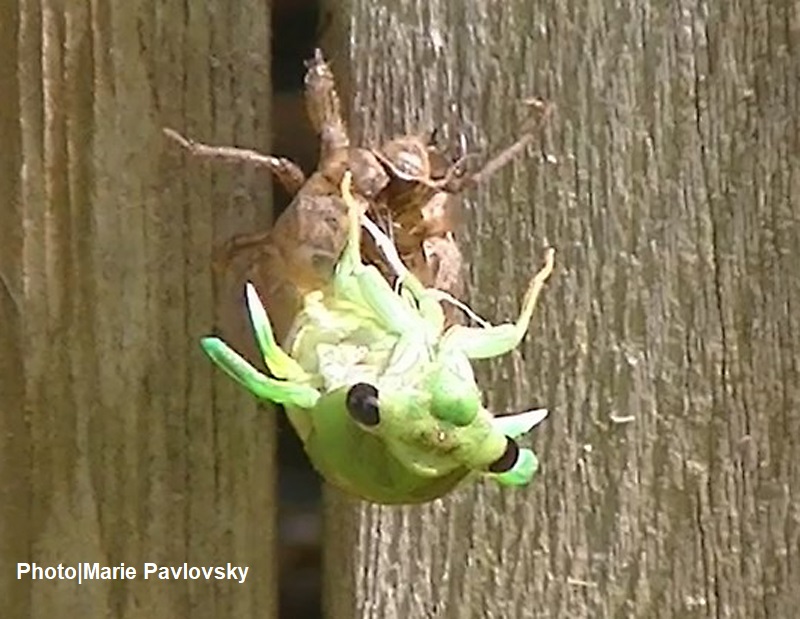 And, please right now, turn off the Asian giant hornet chatter! We won’t see them in Texas or even in the Northeast hanging with Brood X cicadas. “They only exist in Washington state currently,” Wizzie assured us.

What we may see are cicada killer wasps. “This is what I personally call the wasp on steroids because these are probably some of the largest wasps that we have in Texas. . . There’s really no need to kill the cicada killer wasps, they are fairly docile,” she noted. 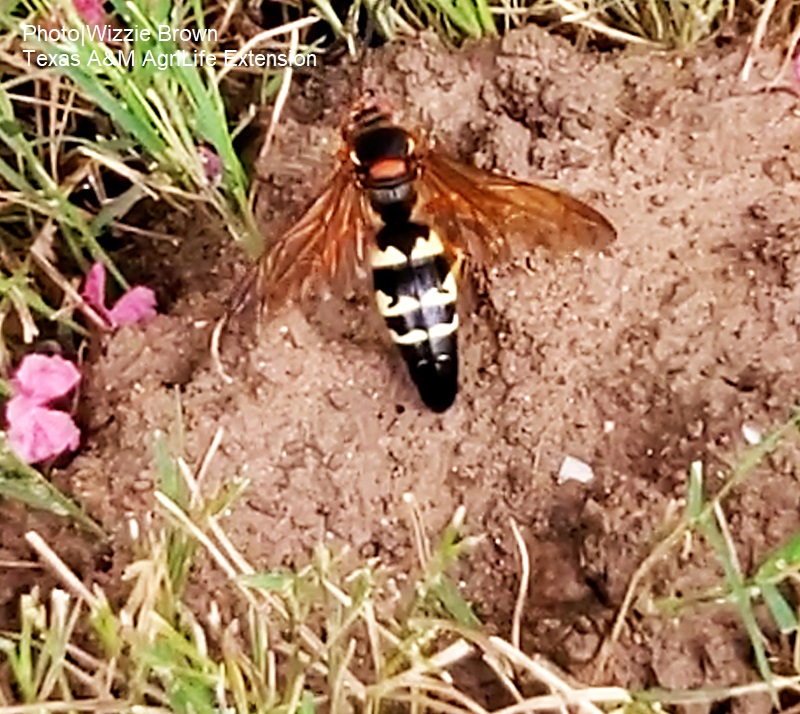 Cicada killer wasps are solitary, so they don’t build nest colonies under your eaves like social paper wasps. Females dig underground burrows, those telltale holes we may see. After paralyzing their prey, they haul it into the burrow to feed their grub-like larvae. The protective males may pester you, but they don’t have stingers and will give up if you walk away. There’s no reason to eradicate them.

A beloved sight of summer is fireflies lighting up the night. Wizzie explained how to maximize that glow show: leaving leaf litter where these beetles lay their eggs. And turn off porch lights in summer to avoid interfering with their flashing mating signals. I’ve got lots of fireflies since I’m a fan of leaf litter that improves my soil, we turn off porch lights, and we use no pesticides of any kind. 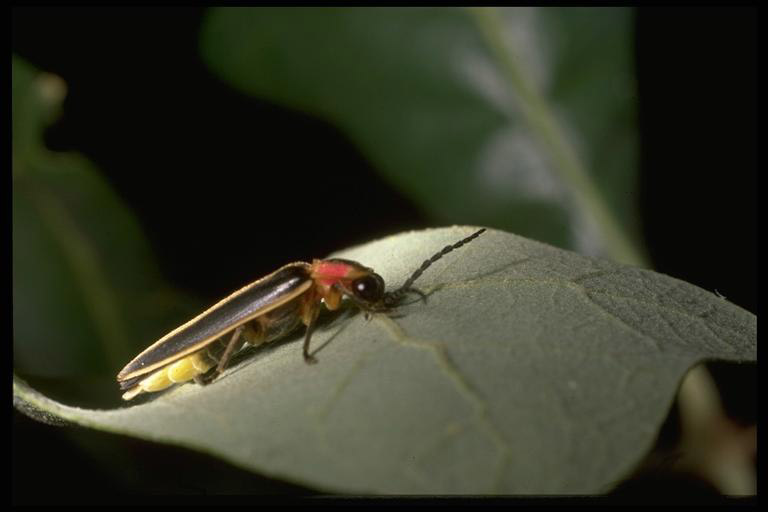 In February, many people asked, “Will the freeze kill pesky insects?” Nope. Wizzie breaks down their various insulating strategies and physiological adaptations. Do note that this also applies to the beneficial insects that we champion!

Instead, we’ve got ramped-up insect populations, thanks to much-needed rain. That drives some insects to seek drier ground on exterior walls or indoors with us. Millipedes (oft-described as “worms”) are beneficial garden buddies that decompose organic matter. Most of us would never even see them until they cluster in our living spaces. 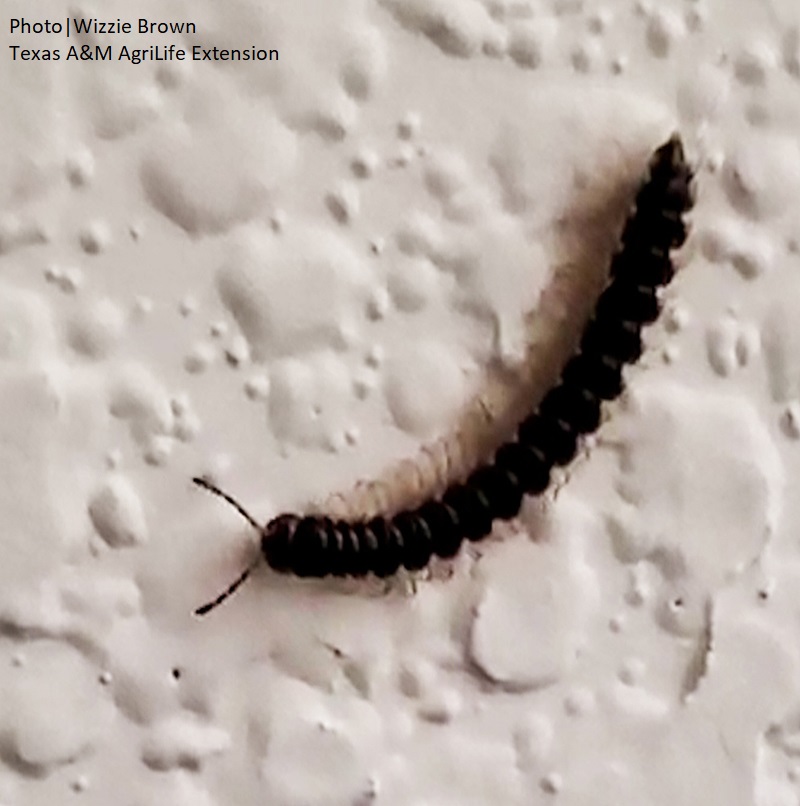 Pillbugs may also sneak indoors. Like millipedes, they are helpful decomposers in the garden. They can also be a gardener’s nemesis. From AgriLife’s Insects in the City: “When abundant–as in years of high rainfall–they can become a significant pest of landscape plants. Most feeding takes place in the evening or at night. Feeding pillbugs readily feed on small garden plants, and new transplants can be eaten to the ground overnight.” 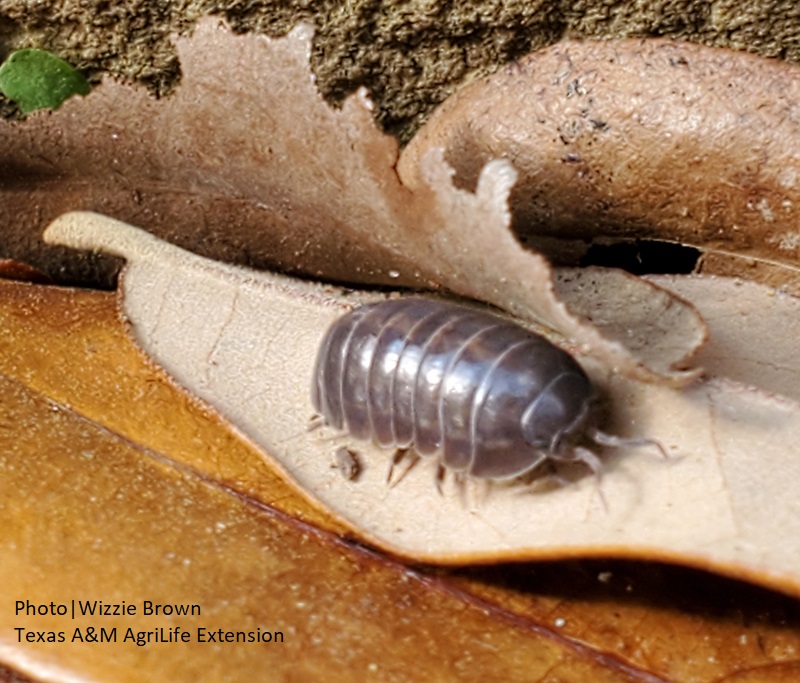 Anyway, since millipedes and pillbugs will dehydrate indoors, I gently gather them up and take them back outside. To prevent a repeat performance, check around to see how they’re getting in. Weather stripping around doors is a simple place to start.

Now: What’s in a name? Pillbugs—miniature crustaceans—also go by sowbug, roly-poly and doodlebug. Basically, whatever we called them as children! Think back: what did your parents call them that sticks with you today? 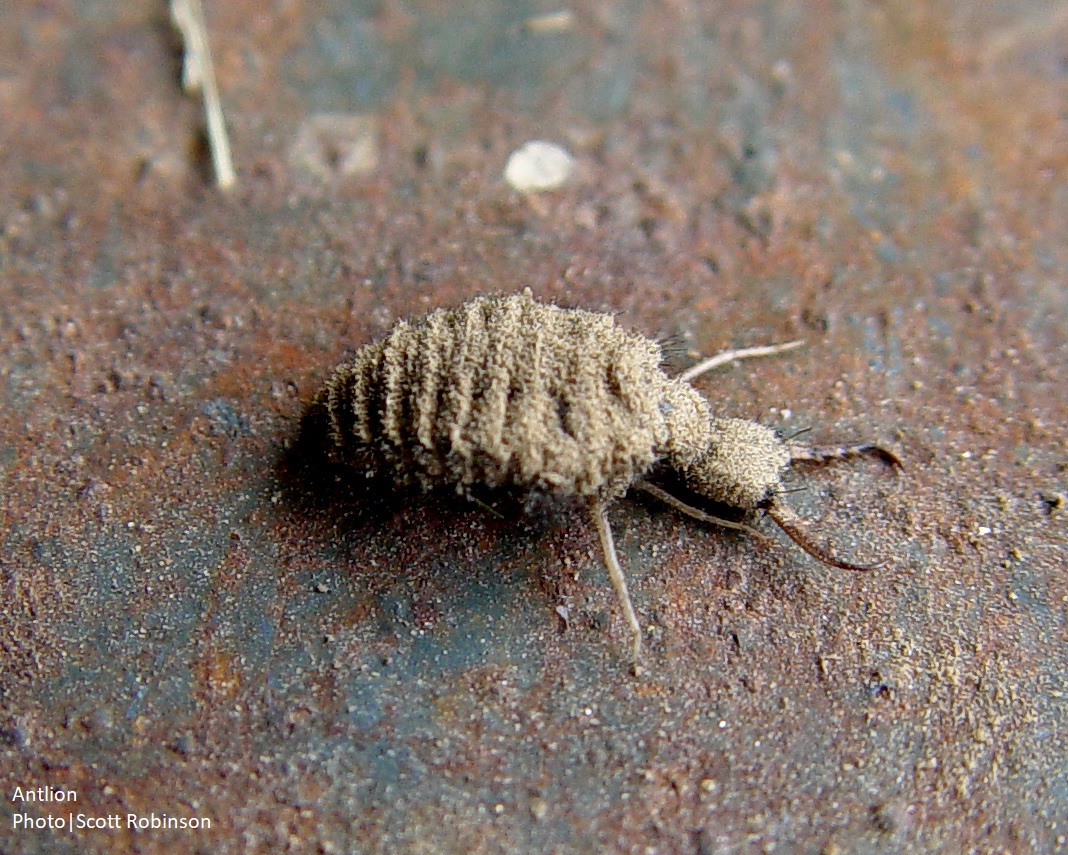 These small, fierce-looking insects dig burrows (akin to cicada killer wasps) to trap their prey—ants and others. 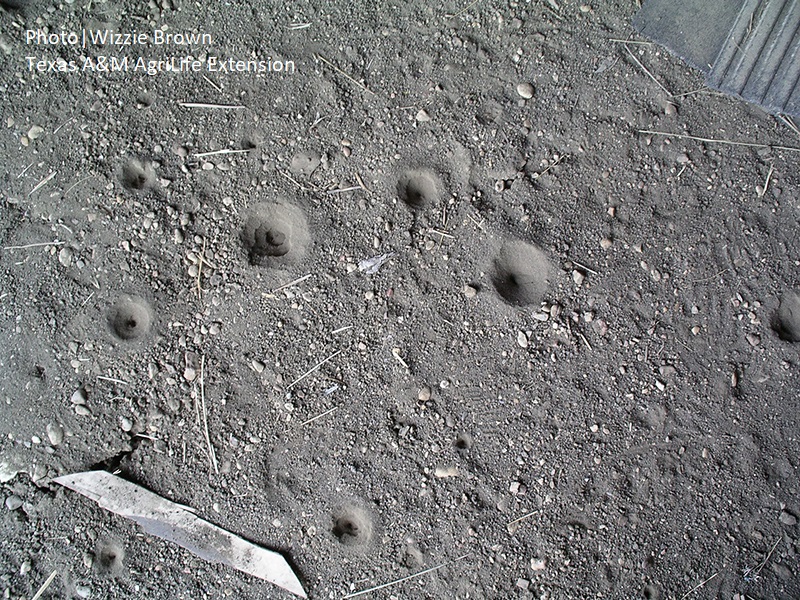 Saturated soil brought fire ants to the surface, too. Wizzie noted that it’s an ideal time to scatter bait (food embedded with pesticide), but avoid applying when rain’s expected in 24 hours. “It’s kind of like eating a soggy cheeseburger. Nobody likes soggy cheeseburgers. They don’t want soggy fire ant bait!”

Mosquitoes are certainly out for blood! The usual suspects, Aedes and Culex mosquitoes, lay eggs in standing water, so empty it wherever you can. We can also treat with Mosquito Dunks or Mosquito Bits that are harmless to us, pets, and wildlife (except mosquitoes). 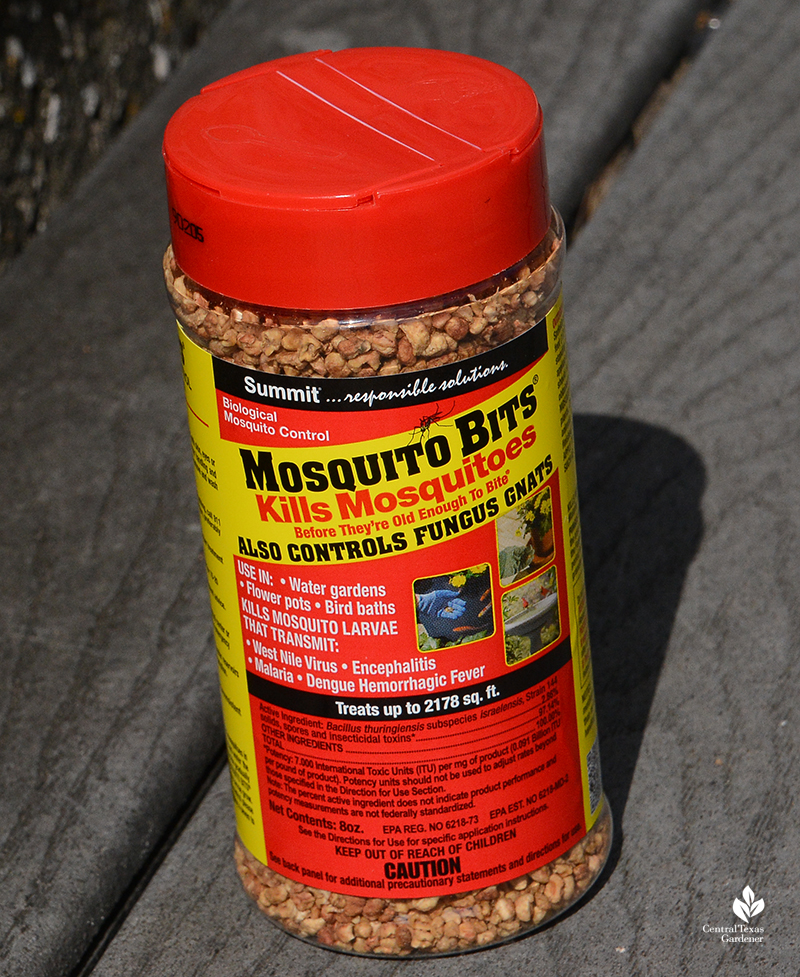 Right now, if mosquitoes seem larger or their bites most noticeable, you’re right! These are floodwater mosquitoes. Rather than laying eggs in standing water, they lay them in the ground. “And when that soil gets flooded with water, hence the floodwater name, that is when those eggs hatch out and they go through their life cycle really quickly because they know that that water source is going to dry up fairly rapidly,” she noted. Mosquito controls are pointless, since they’ll fly five miles for a blood meal! Instead, protect yourself with light-colored clothing and topical repellents. Get recommended repellents from the CDC.

But, we don’t need to worry about June beetles (June bugs), though lots of them can be scary! Years ago, my backyard toads reduced an out-of-control population. 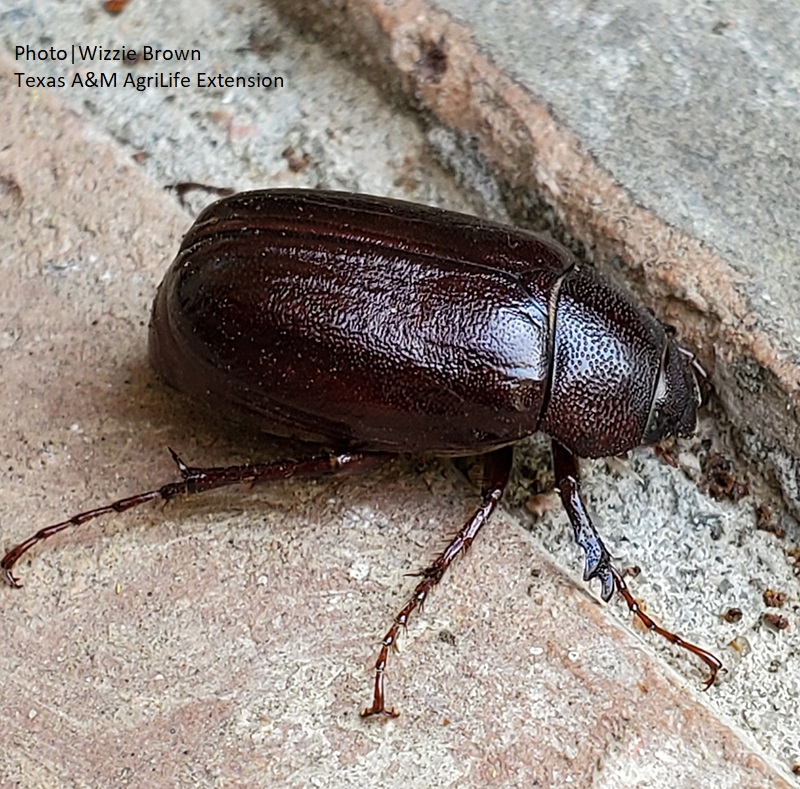 Like other insects, they are short-lived as adults. After they pupate into flying adults, they mate, lay eggs in the soil, and then get snagged by spiders or toads or whatever. Their larvae may be the white grub worms we see in the soil. If you dig them up, toss them into bird feeders!

Wizzie specializes in IPM, Integrated Pest Management, which essentially means exploring and understanding pest problems to reduce or avoid them while minimizing risks to people and the environment. That translates into bringing beneficial wildlife into our lives. 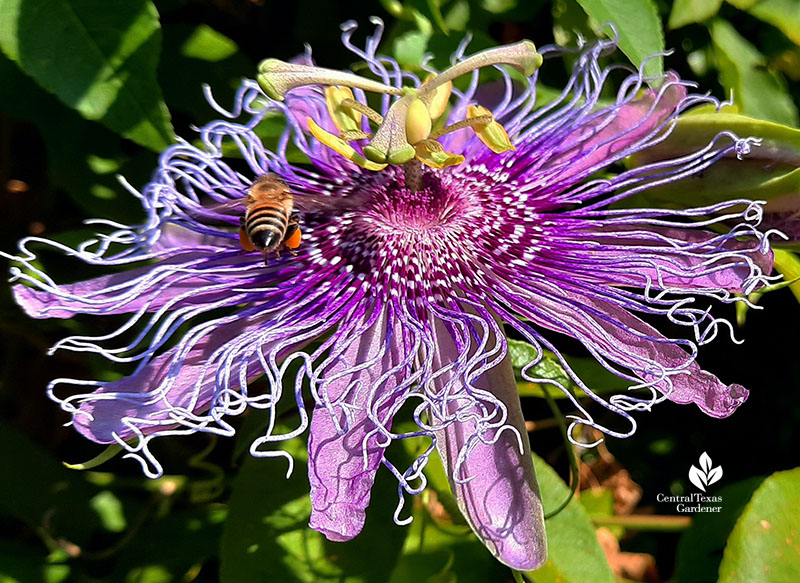 If you’re in Austin and a member of iNaturalist, join in National Pollinator Week (June 21 – 27) by documenting your insect finds! This is part of an initiative to have Austin certified as a Bee City USA by the Xerces Society. 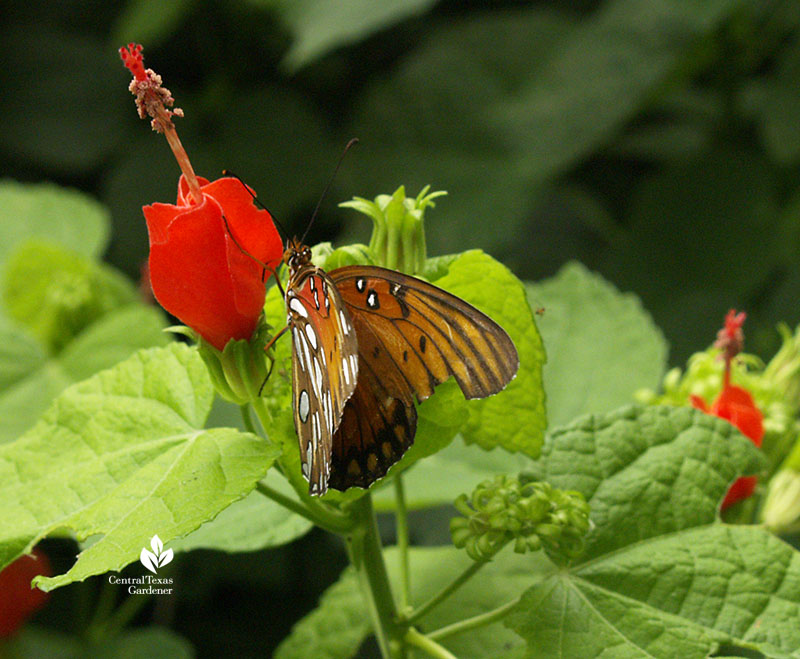 Check out Wizzie’s (free) fun and fascinating webinars. Email her at ebrown@ag.tamu.edu to sign up for updates. Follow her on Instagram at @urbanipm for her backyard bug hunts!

For sure, take a listen to the podcast Bugs by the Yard for a fast-paced, personable conversation with Wizzie and fellow A&M entomologists, where wit meets knowledge. 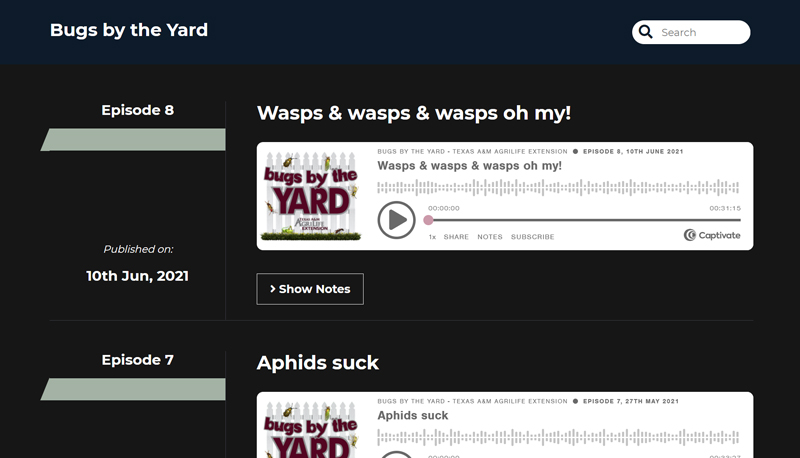