Is it just me or did spring seem to rip past us faster than usual? Sure, every winter we’re bursting with anticipation like kids before a birthday, and then before we know it, the “presents” are in the past. 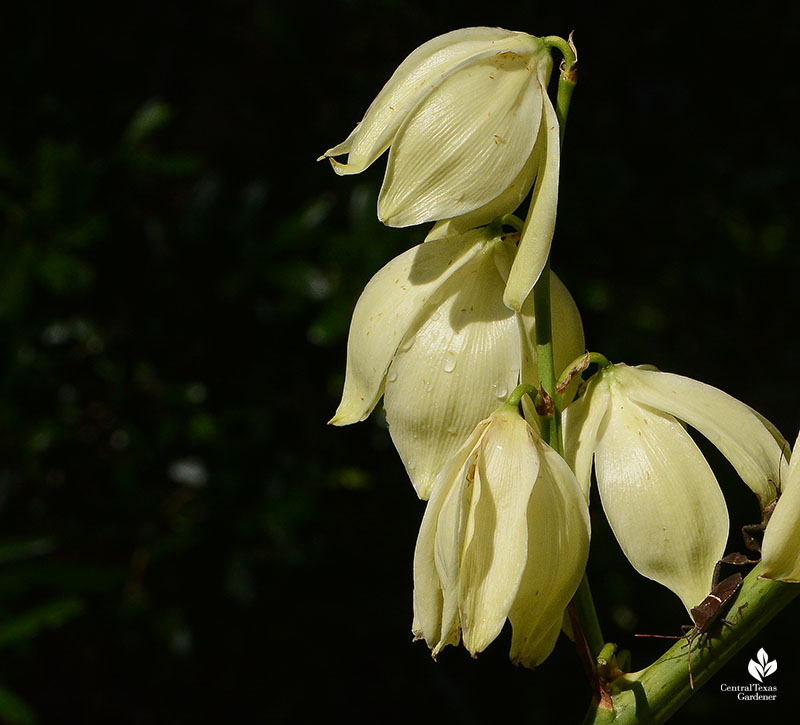 For weeks, I watched my pale-leaf yucca (Yucca pallida) shoot up a flower stalk, set buds, and unfurl creamy bell flowers that tempt a squeeze. Then in a mere week, those prized little balloons absolutely deflated. My consolation: They’ll do it again next year, since yuccas don’t die after blooming like some agaves. 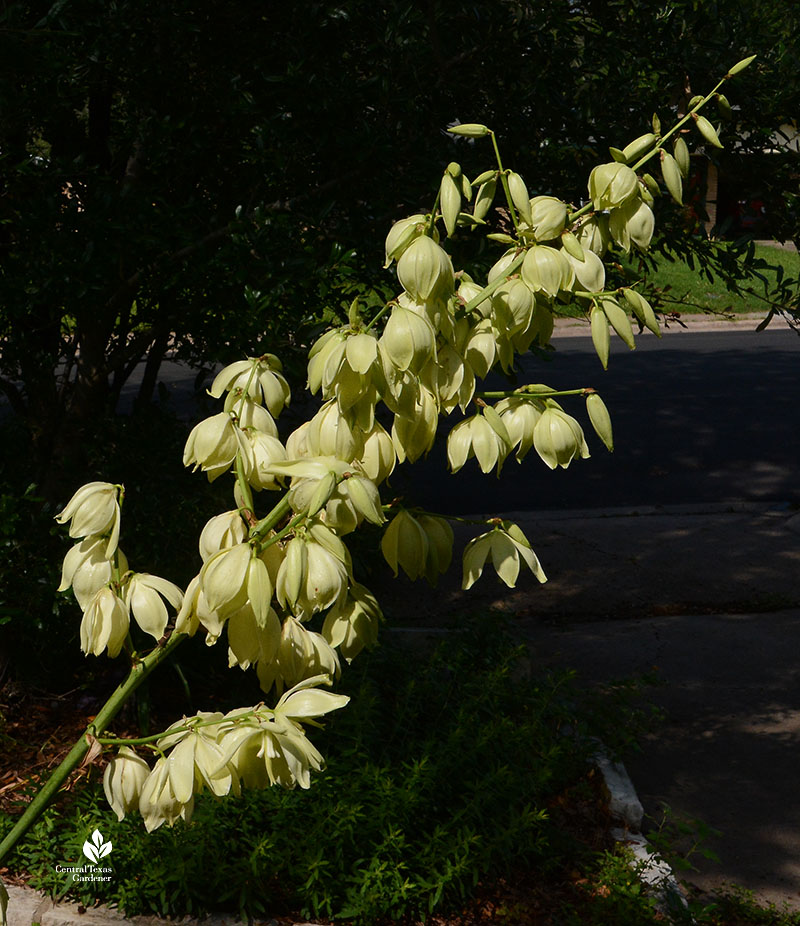 Datura (jimsonweed) flowers are even more fleeting, lasting only a day. Then they curl themselves back up to set a round bristly seed pod. Since it will pump out flowers all summer for pollinating moths and bats by night, the show will carry on. 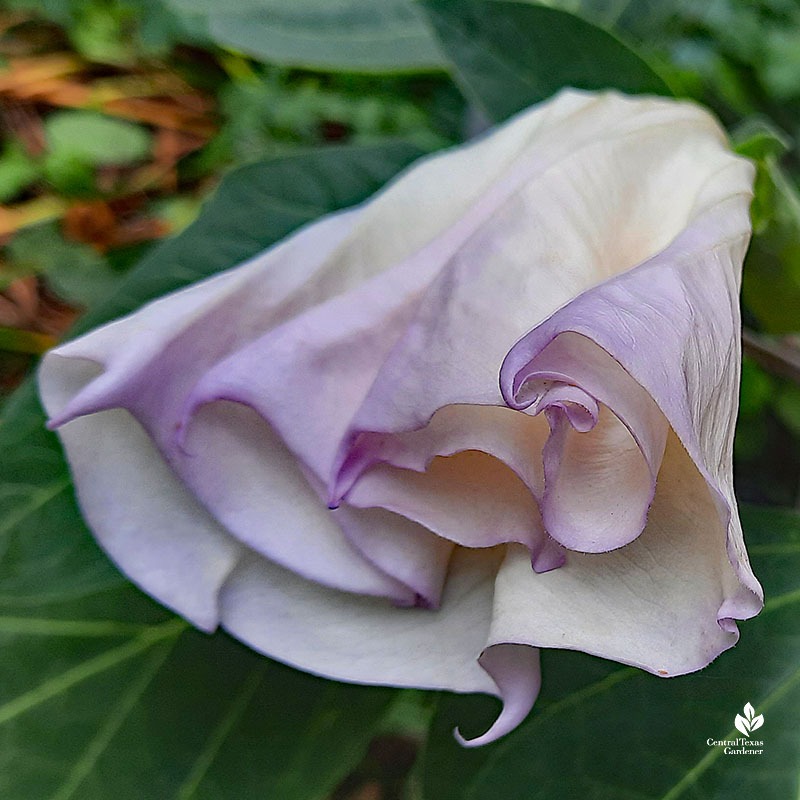 Last year I planted passed-along seeds in a large container. The original plant returned this spring, along with lots of little ones. Do note that every part of this plant is poisonous to people and pets! 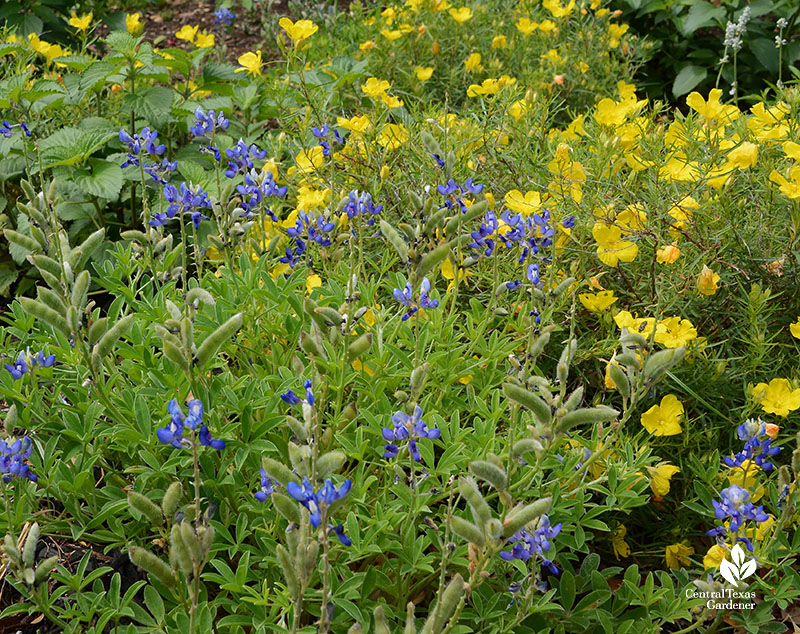 The bluebonnets are going to seed and calyophus will cease blooming soon. But native perennial mealy blue sage—beloved by bees, butterflies, and hummingbirds—will continue flowering until winter, taking a break in summer’s heat. 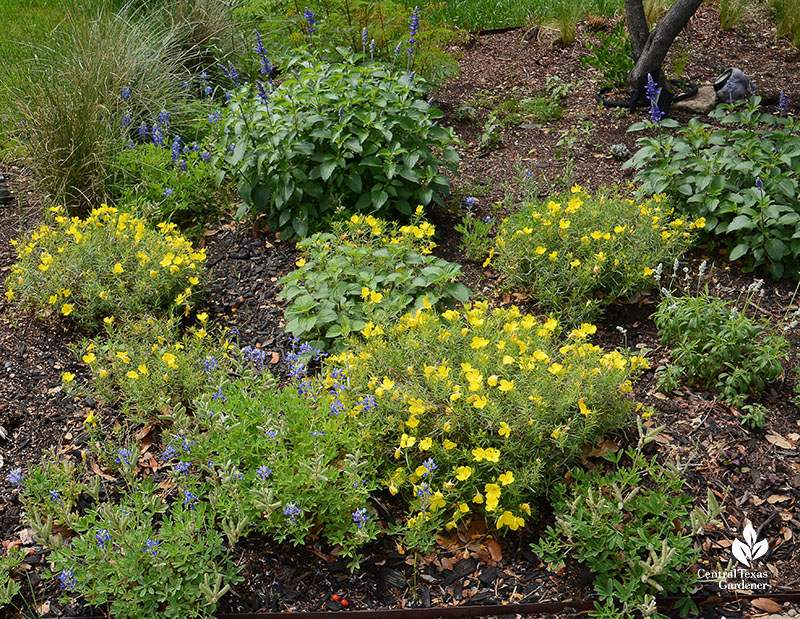 A few weeks ago, rain lilies—our native Cooperia pedunculata—dotted medians and fields after our long-awaited rain shower. Since these bulbs multiply and also scatter seeds to populate other spots, we’ll greet them again. It’s such a heartbreak when maintenance crews prematurely mow them (or bluebonnets) to stubs. 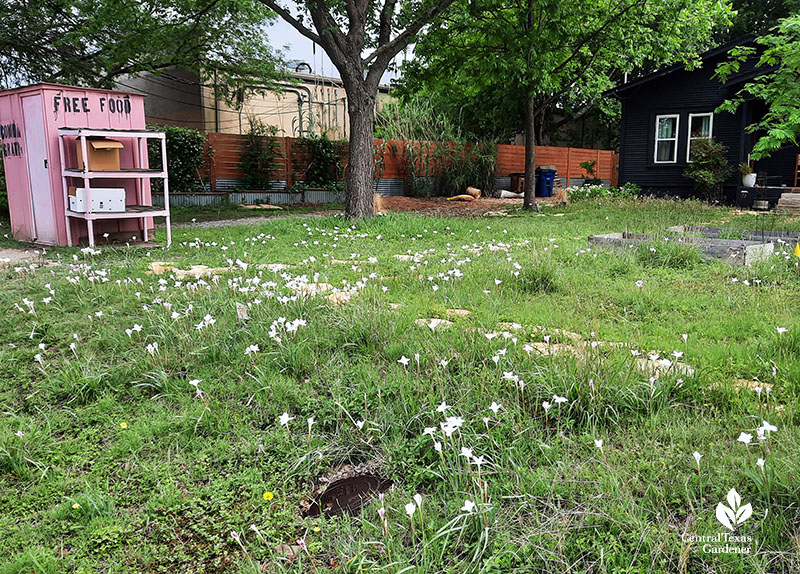 Now here’s an invasive weed that you DO want to pull or mow before it forms seed heads! This is Torilis arvensis, commonly called cow parsley or hedge parsley due to its similar leaves. 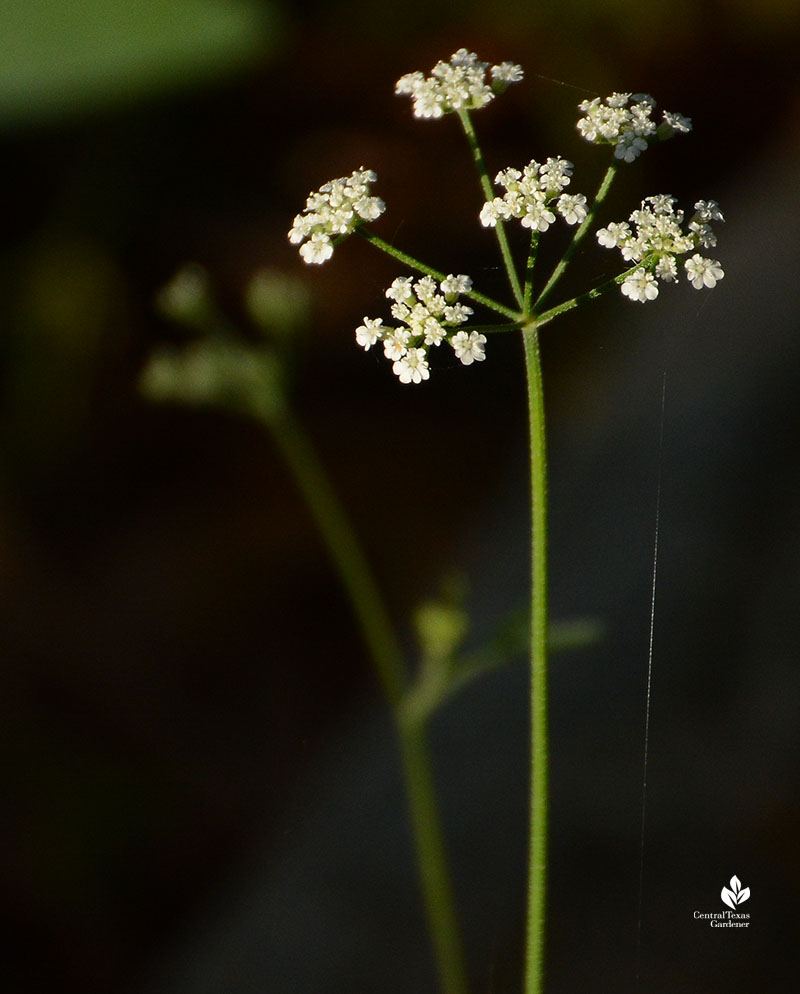 The flowers do feed pollinators, but its bur-like seeds grab a ride on your socks, gloves, wildlife, and pets to spread unwanted wealth. It’s no picnic to get them off, either, especially if you have a curly-haired dog. 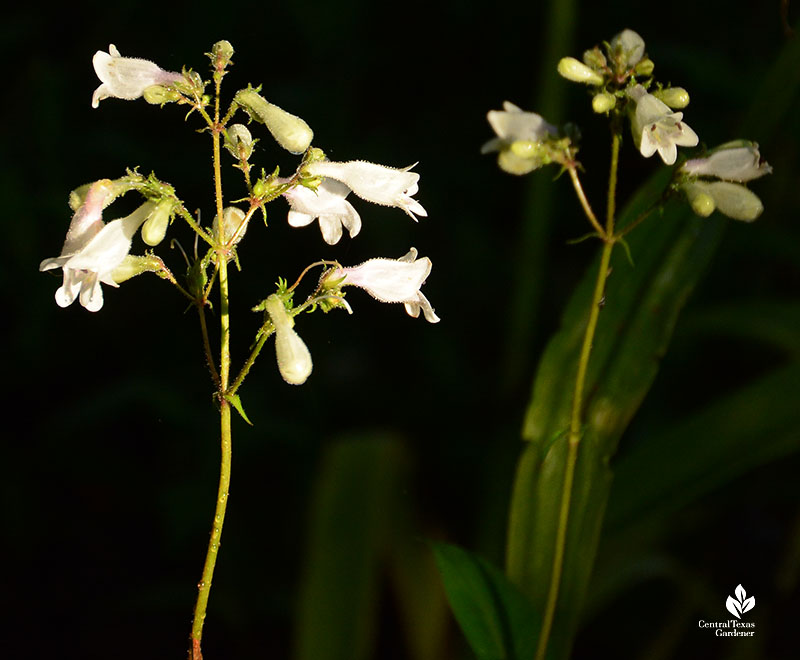 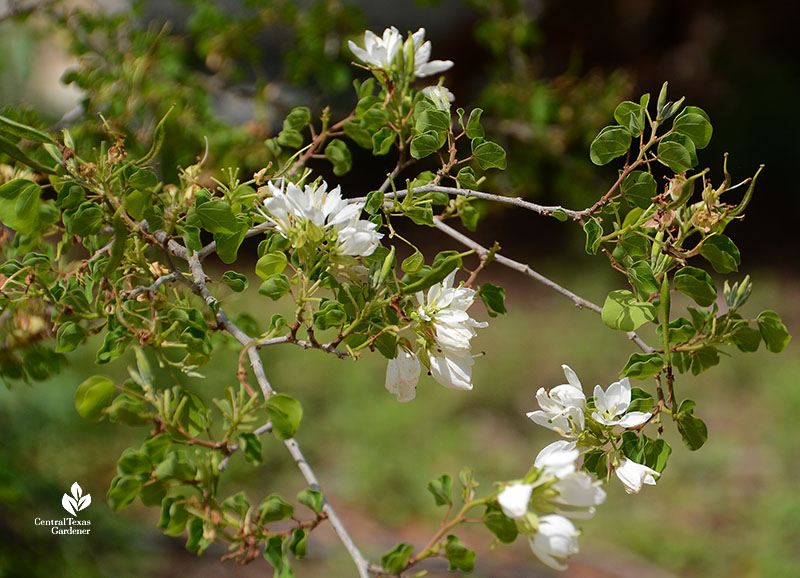 A shrub or multi-trunked small tree, anacacho orchid tree requires good drainage. It can suffer in harsh winters, so consider planting on a south-facing wall or even along a street like this one. 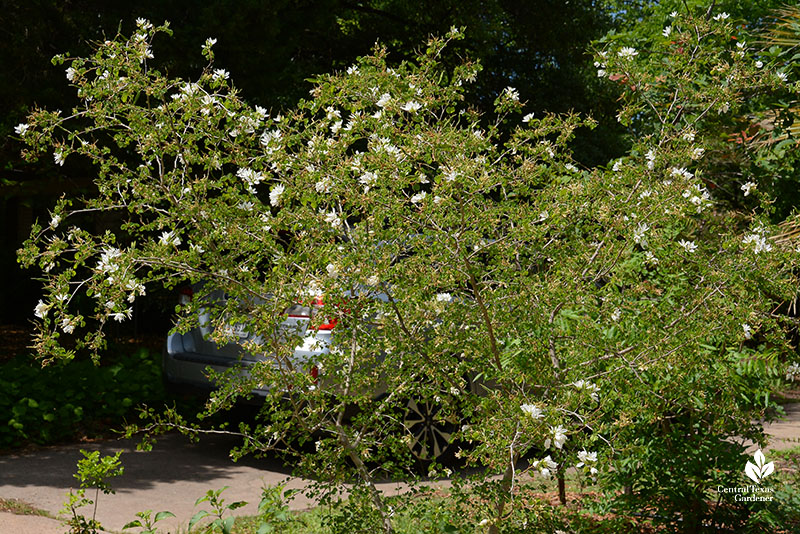 My Louisiana iris has been a treat this time of year since a kind gardener divided his years ago. 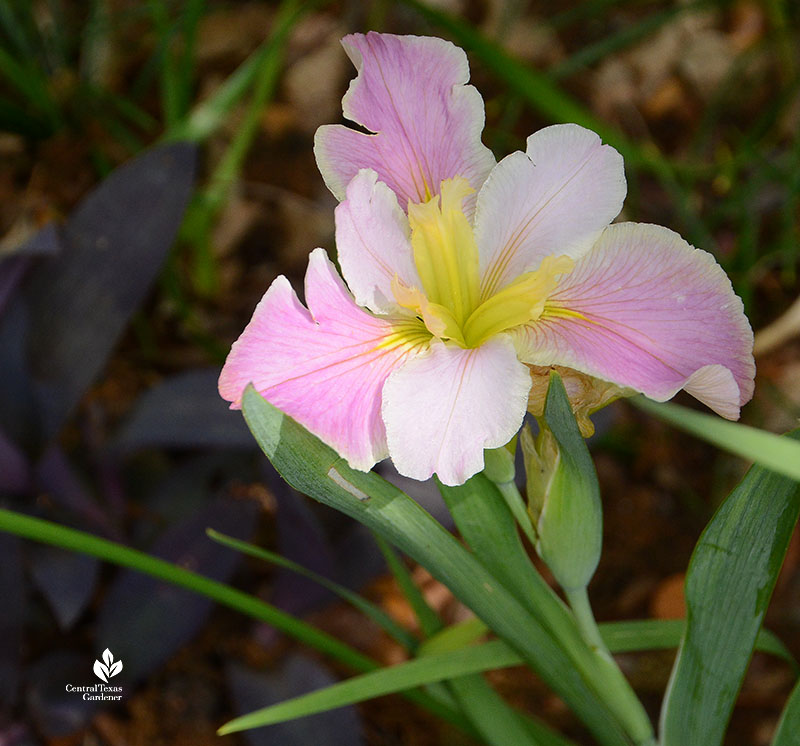 Recently, I moved this container to a more prominent position and stuck the gazing ball on top to complement purple heart below. I’ll divide the various irises into more suitable positions. Soon, native coralberry will fill the right side but leave room for my recent plantings of Salvia guaranitica. On the left, silvery-toned Mexican honeysuckle missed its spring bloom, so I’ll look forward to its flame orange flower spikes this summer. 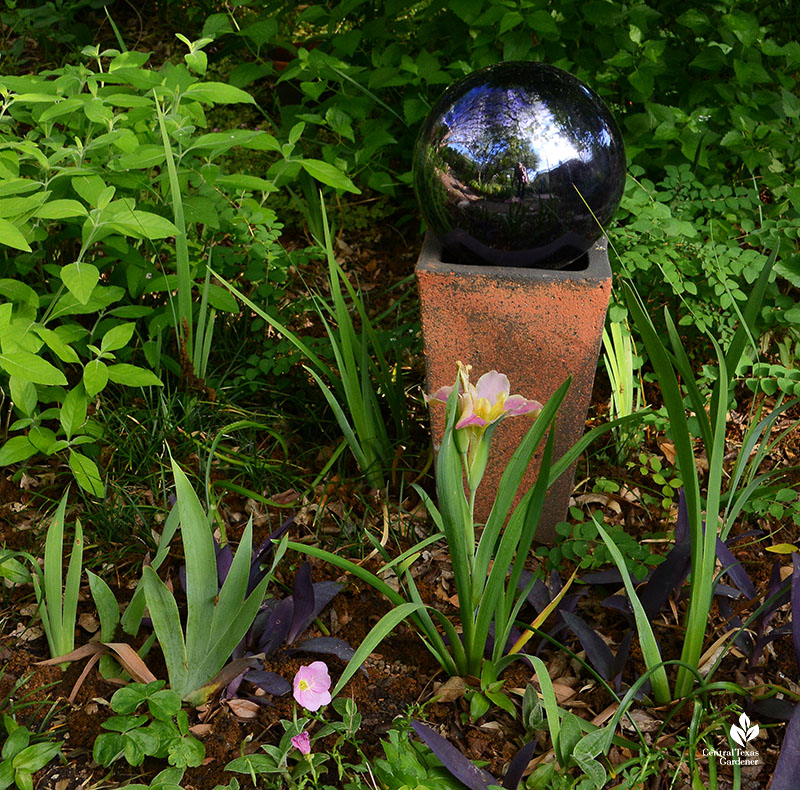 I totally neglect my fragrant rose ‘Maggie’ reigning over an afternoon hot spot against the chain link fence. But that’s part of its heritage. 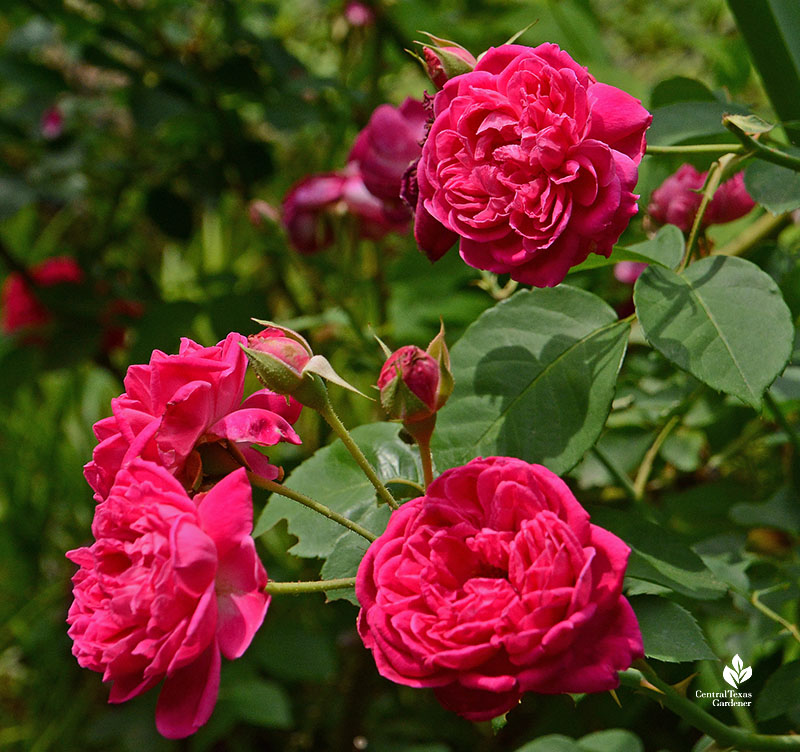 When William Welch, Texas A&M Professor and Extension Horticulturist, discovered it in Louisiana at a family residence and took cuttings, it had survived just fine on its own for generations in cemeteries and old homesteads.

I’ve been hearing about Kern’s flower beetles eating rose flowers instead of just pollinating them (like on Jo Diser’s prickly pear flowers). 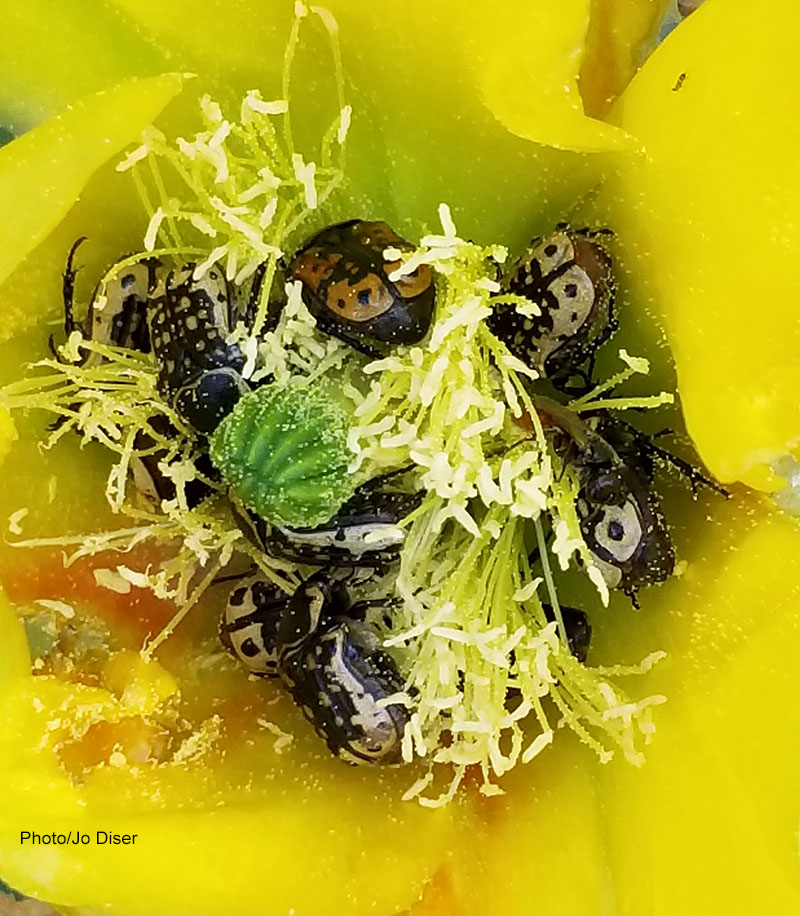 Susan Snyder and Mark Hathaway have never seen them in their artistic food and flower backyard, but you sure can’t miss them now. 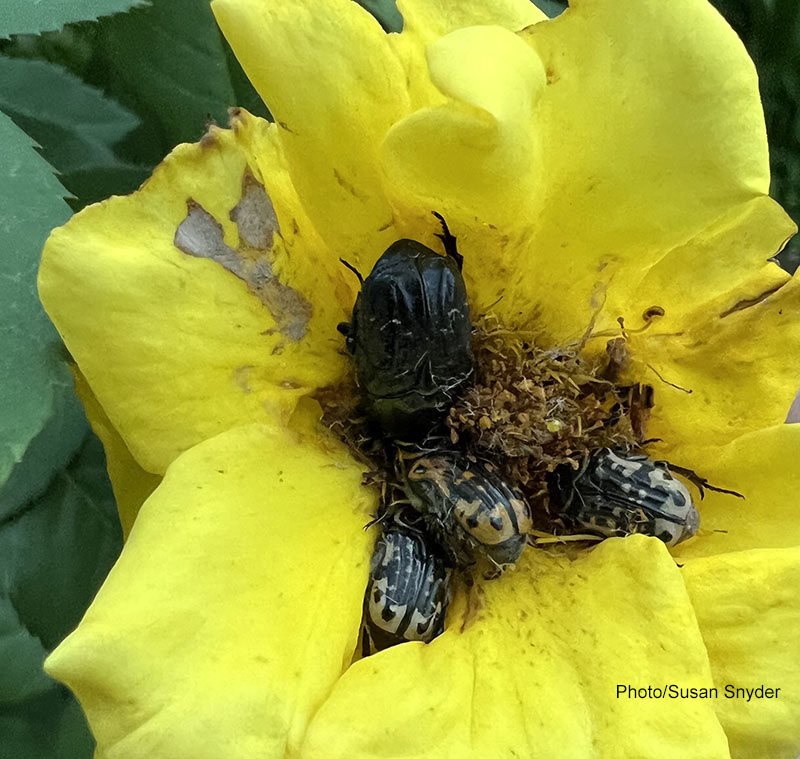 When CTG visited the wondrous garden created by Andrew Ong and Jared Goza, they showed us their hack to protect fragrant roses intended for cutting: fruit net bags! 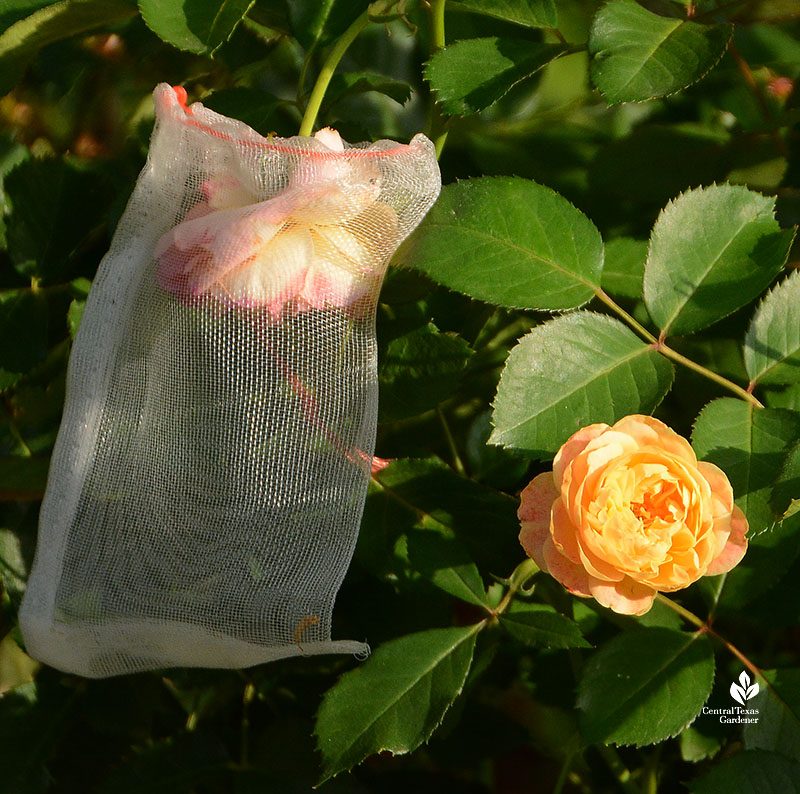 When the heat came on early, I let this thistle bolt (go to seed), an absolute invitation to plant-sucking aphid pests. Since we only get beneficial ladybugs if we offer them a meal, it’s nature’s way to maintain a predator/prey balance. And sure enough, a “loveliness”—a group of ladybugs—flew in for a feeding fest. If your ladybugs need a helping hand, simply blast the aphids with the hose. 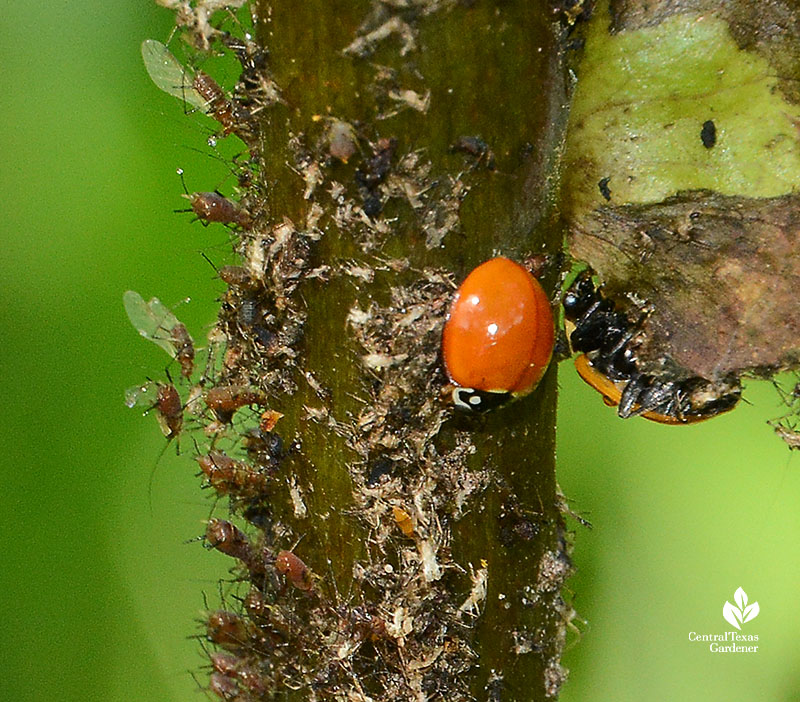 Adding to the natural predator-prey balance, ichneumon wasps dropped by to parasitize aphids by laying their eggs on them, and to feed on aphid secretions, honeydew. 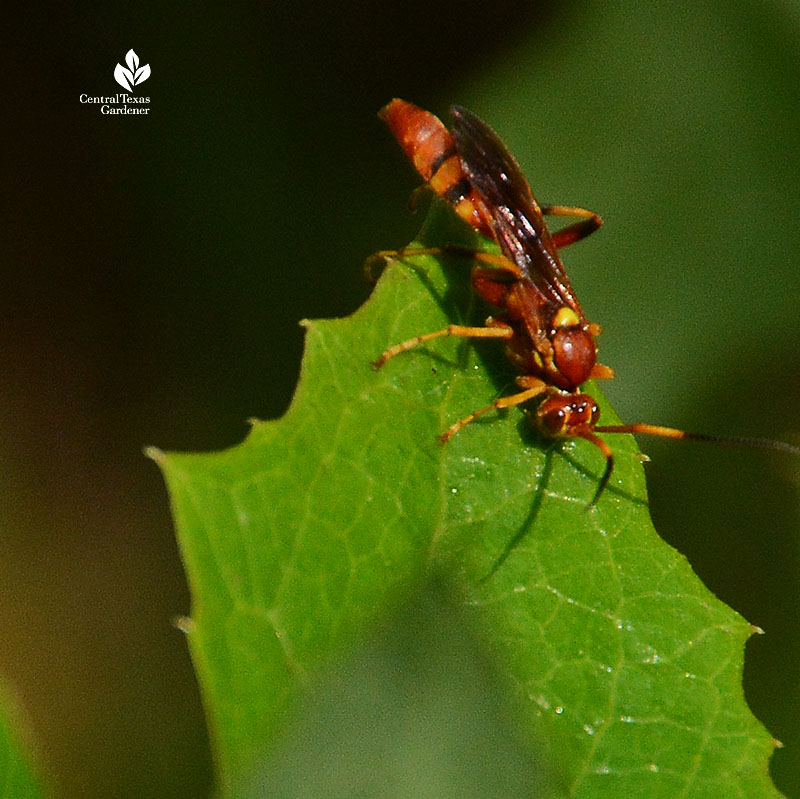