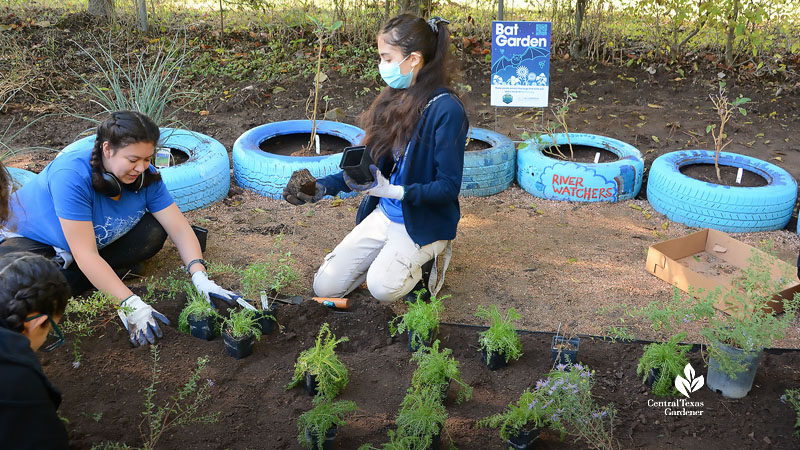 On a brisk sunny Saturday morning refreshed by rain, the first one in November, we joined a team of jubilant young environmentalists at Austin Youth River Watch, excited to plant their bat gardens on It’s My Park Day. 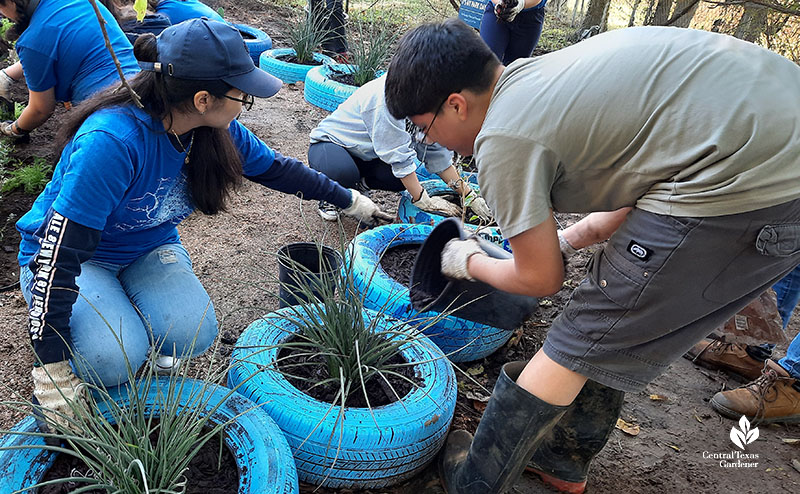 What is a bat friendly garden? 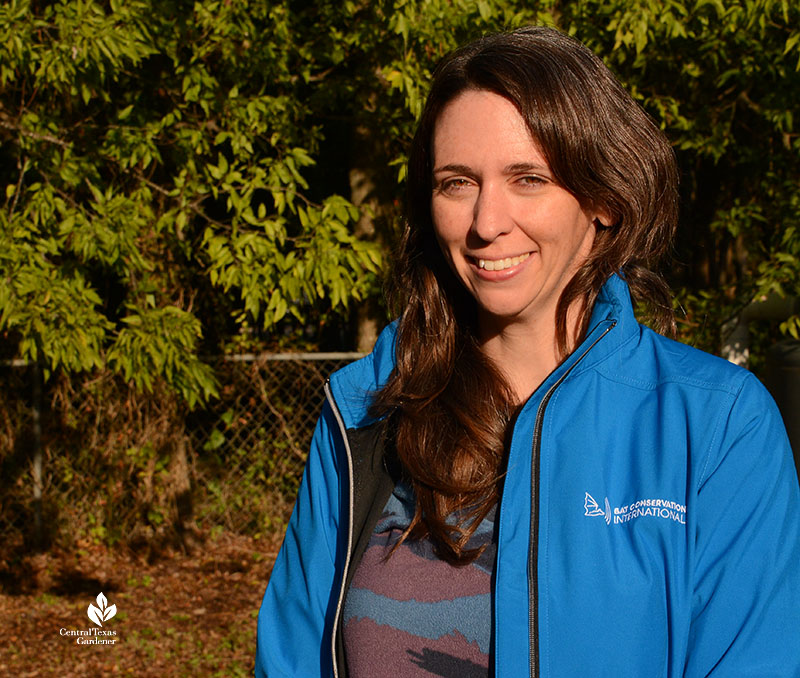 Erin Cord, Community Engagement Manager for Austin-based Bat Conservation International, explained, “Most of the bats in the United States and all of the bats we have in Central Texas actually eat insects. By providing native plants, you’re providing a food source for the insects that bats are actually eating, so that’s really, really important.” 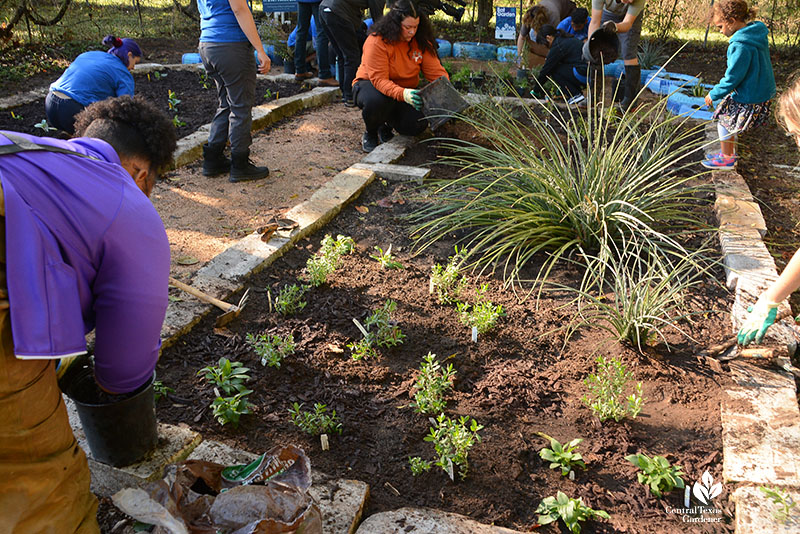 Bat populations are dramatically declining in part due to habitat loss. We can help them out by planting for bloom time succession with diverse plants that attract insects across the year. That’s especially important in Central Texas since we have bats that may overwinter, including some Mexican free-tailed bats, tricolored bats, and the Cave Myotis. 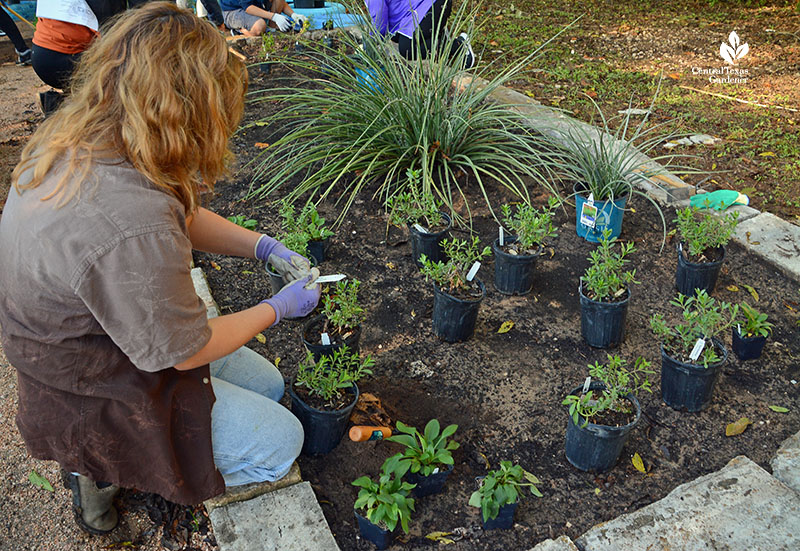 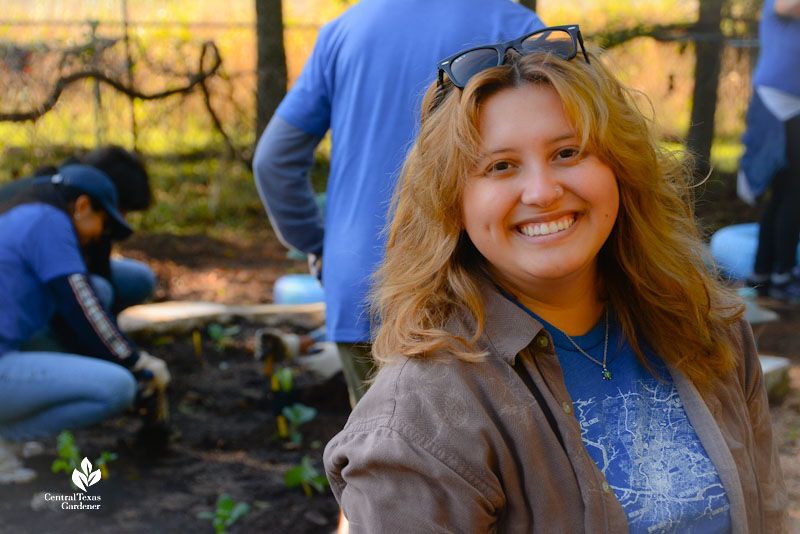 “I really wanted to join this program because I know that they make a really big difference in the lives of the kids they work with. And I wanted to really contribute to that while also contributing to the environment around me,” Alondra said. 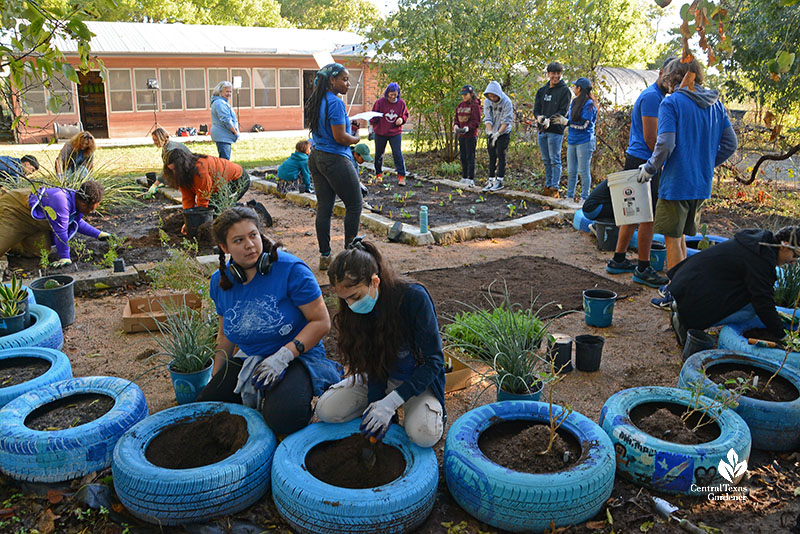 Home base for non-profit Austin Youth River Watch sits near the Colorado River next to TreeFolks. Since the 1990s, they’ve taken students on outdoors adventures, teaching them to collect and track water-quality data. With initial funding and long-term support from the City of Austin and LCRA (and donations from people like us!), students learn leadership skills in after-school and summer programs and develop a greater understanding of the relationship between human activity, natural systems, and our water supply. 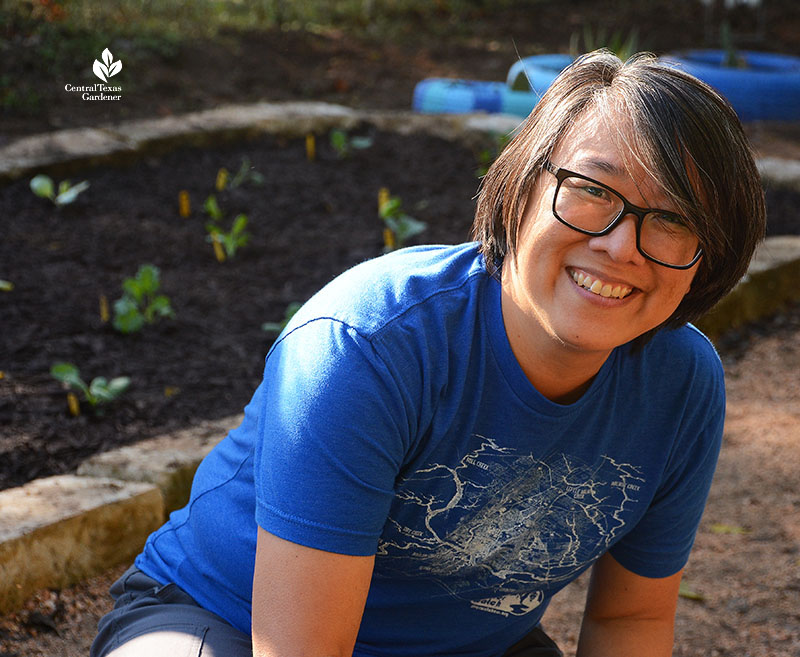 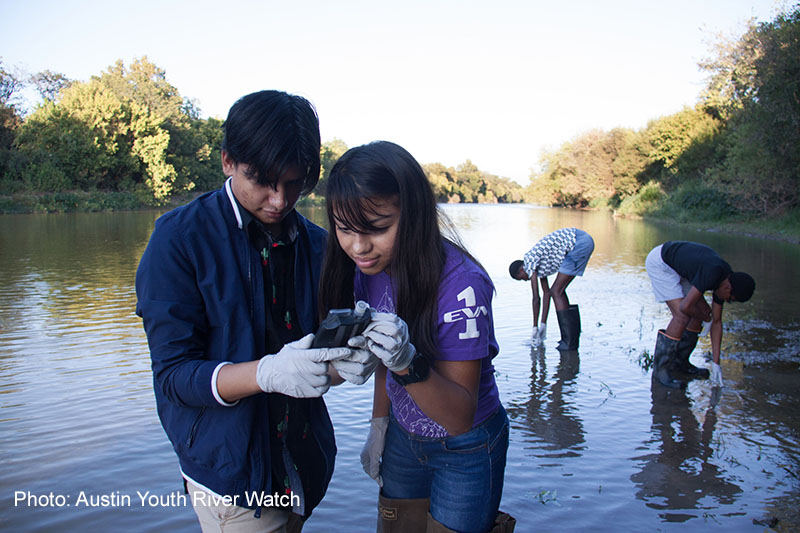 “And I think that enhances science and nature education that happens in the schools and in the classrooms and exposes a wider variety of young people to potential environmental careers.” 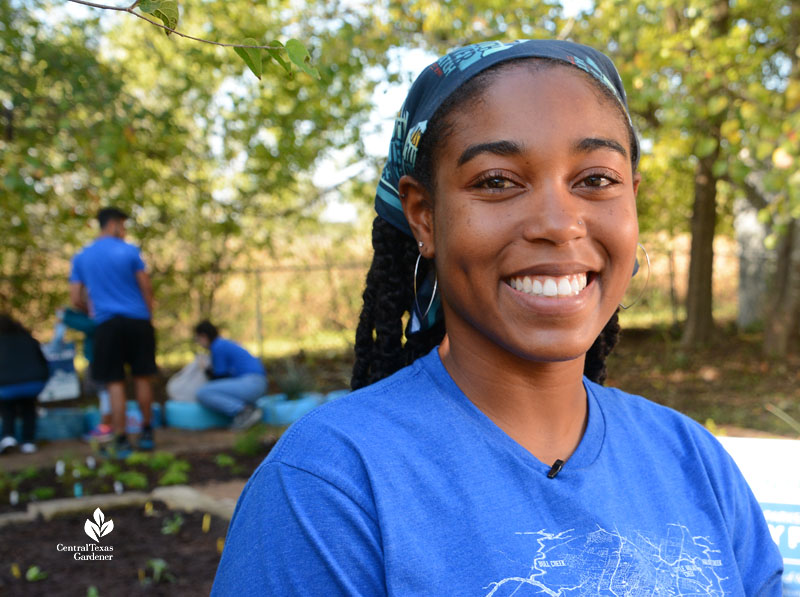 Chanel Davis, Program Manager for Austin Youth River Watch, added, “We work predominantly with Black and brown students who historically haven’t had access and opportunity to the outdoors in the same ways as other groups.” 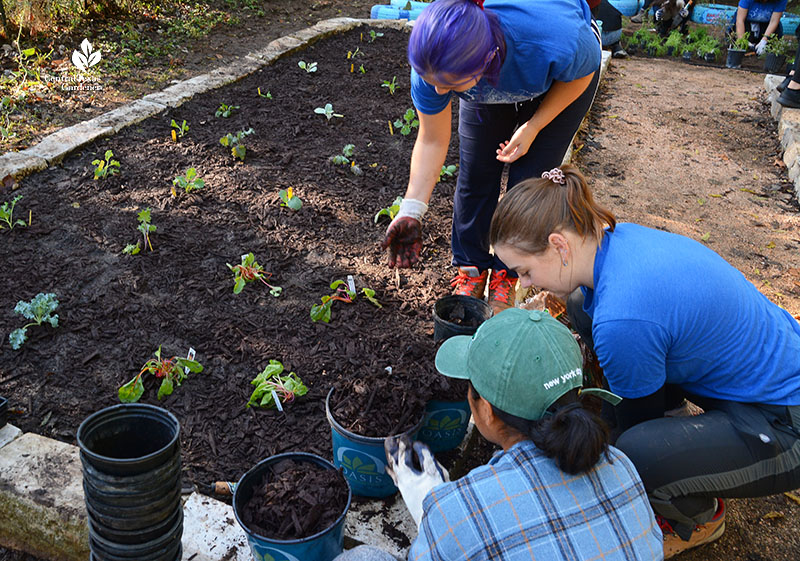 Emma Walsh, Special Projects Manager, shows new gardeners how to plant vegetable transplants. “Our goal is to create a space and to create community for them to be able to have positive experiences in nature, but then to share those positive experiences with other Black and brown young people that look like them and for them to have some ownership, as well as hoping that that extends to stewardship later in life. Currently in life as they’re high school students, but also later in life and throughout their life,” Chanel said. 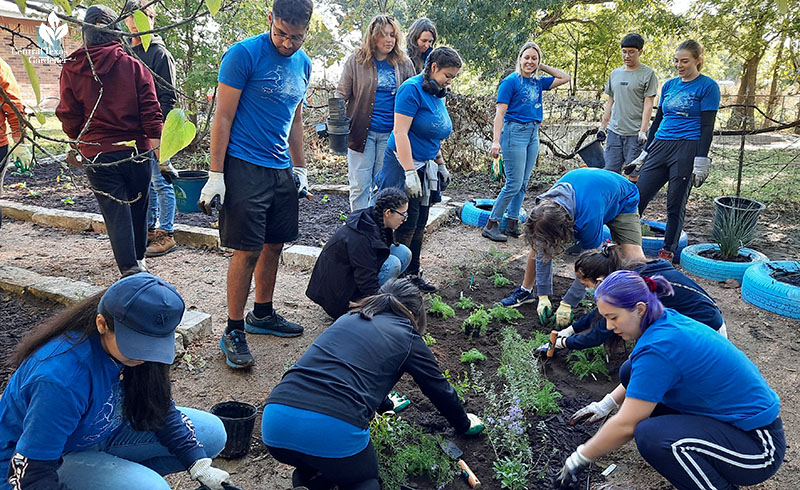 For months, the students worked with Bat Conservation International to learn all about bats and why it’s important to create habitat for them. In this bed, they planted yarrow, Drummond’s aster, and American elderberry. 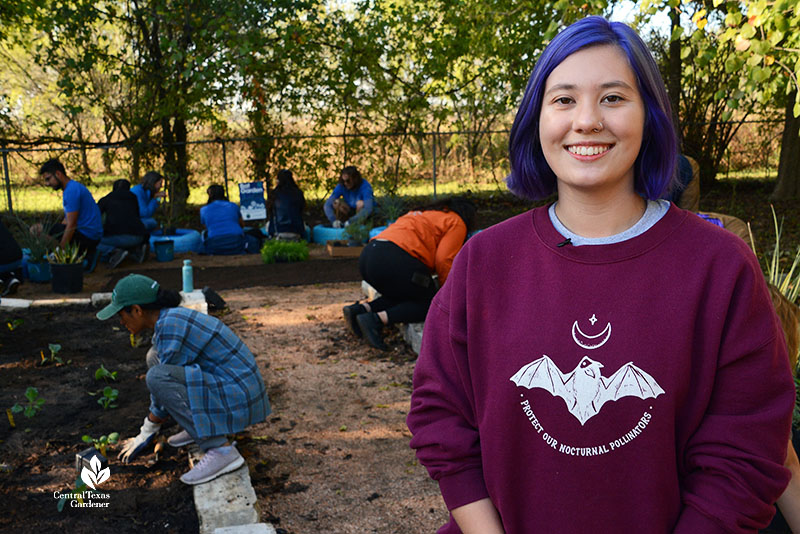 College student Krista Kelly learned about the program from one of her professors. “I love bats because as an environmental studies major, I love learning about how they’re a natural form of pesticide. I’m really into plants and learning about sustainable planting and honestly, bats just kind of get a really bad rap,” she said. 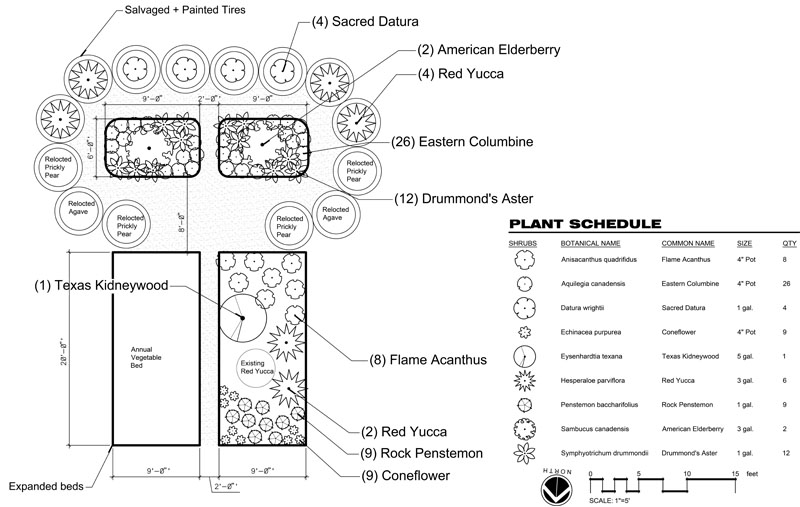 Landscape architect Rachel Raise, co-founder of Pollinate Austin, designed the gardens for beauty, ease of maintenance, cost-effectiveness, and to attract nighttime pollinators across the year. 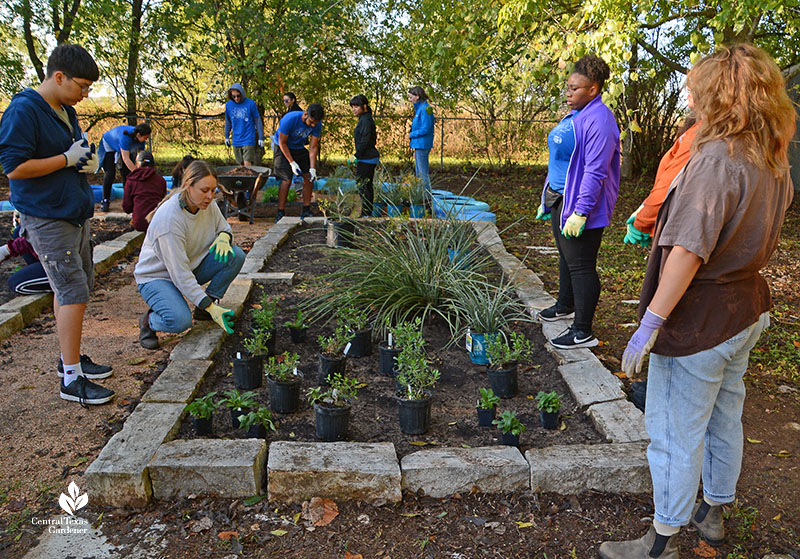 Program Manager Beth Bennett demonstrates planting tips, from massaging plants out of their containers to how deep to plant. 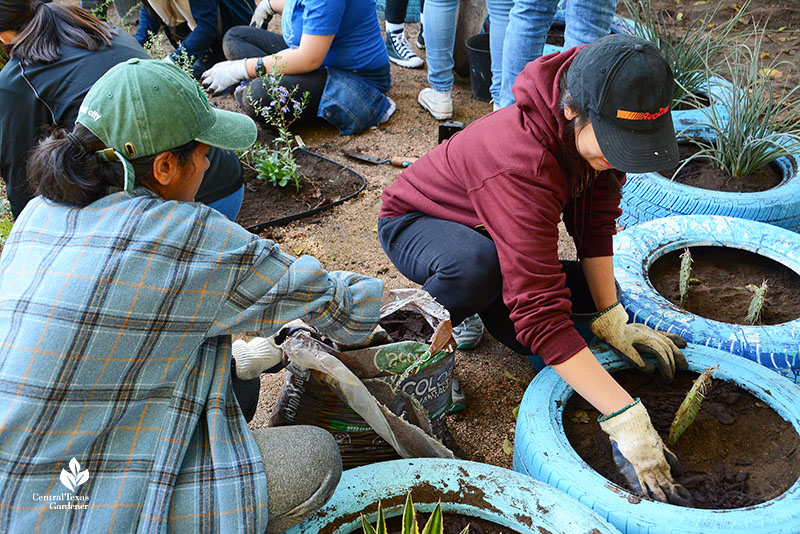 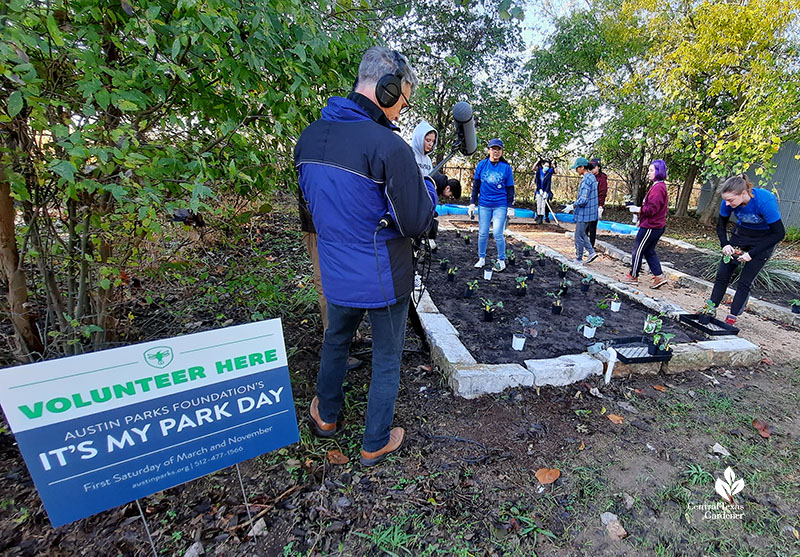 On It’s My Park Day, students also teamed up to plant their vegetable garden bed. If it suffered in our recent hard freezes, that simply contributes to the big lessons they’re learning about working with nature. 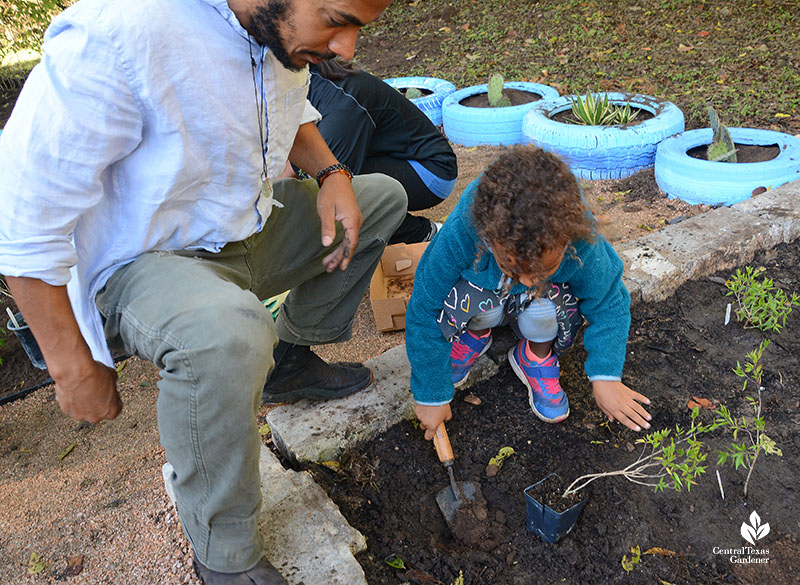 In a beautifully organized and orchestrated morning, filled with laughs and joyful whoops (making for tricky audio, but so fun!), generations worked side by side. The young daughter of Operations Manager David Morris could certainly teach an old hand like me a few things! 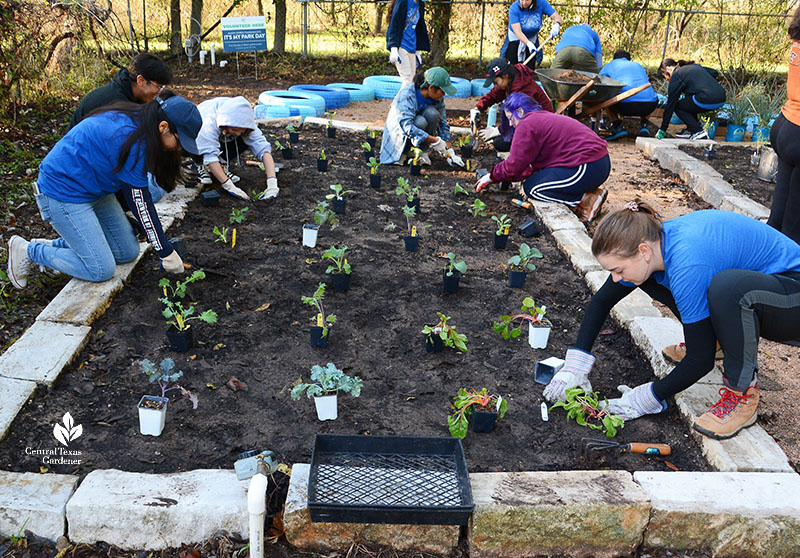 “I think what we’re really good at and what we hear from students most has to do with new experiences outdoors. And also just being a lot more comfortable with science and being in the outdoors than they would have before,” Melinda Chow noted. “And I think one thing we hear a whole lot is the sense of community making new friends, new friends that they would not have had if they were not part of a program like Austin Youth River Watch. And those friendships they carry out, you know, throughout their lives.” 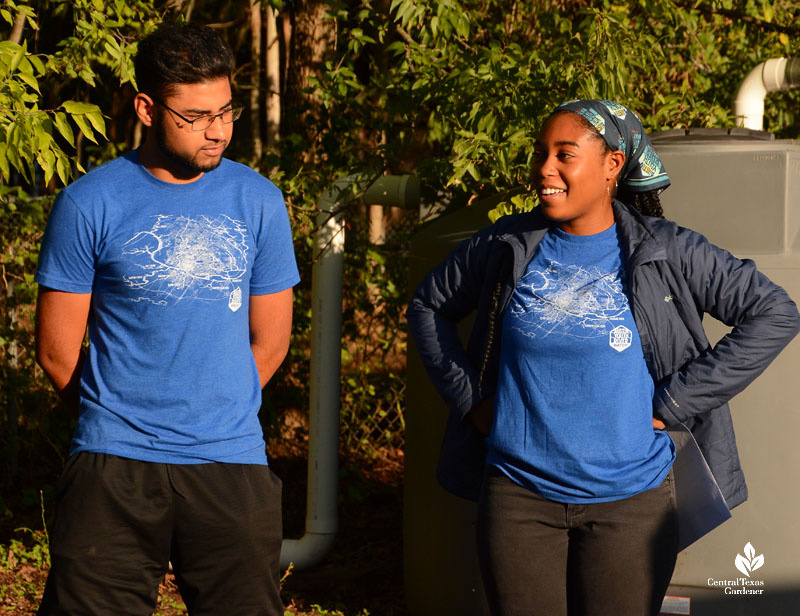 It’s changed horizons for intern Jose Rodriguez. “Ever since I’ve gotten here, I’ve really just loved being outside, and it’s really changed my mind set about a lot of things. Like I wanted it to be like a police officer. Now I’m not sure what I want to do now. Like I want to be out here now. This is what I like to do. I like to get down and dig and put plants on the ground. I like to get dirty, try to make a better environment for animals or anybody, really. It’s always good to be planting stuff. It can only help. So why not?” he said.

Find out more about Austin Youth River Watch and Bat Conservation International for resources and to get involved and support.

← Nipped but Not Out!
Help Us Set CTG’s Pathway! →